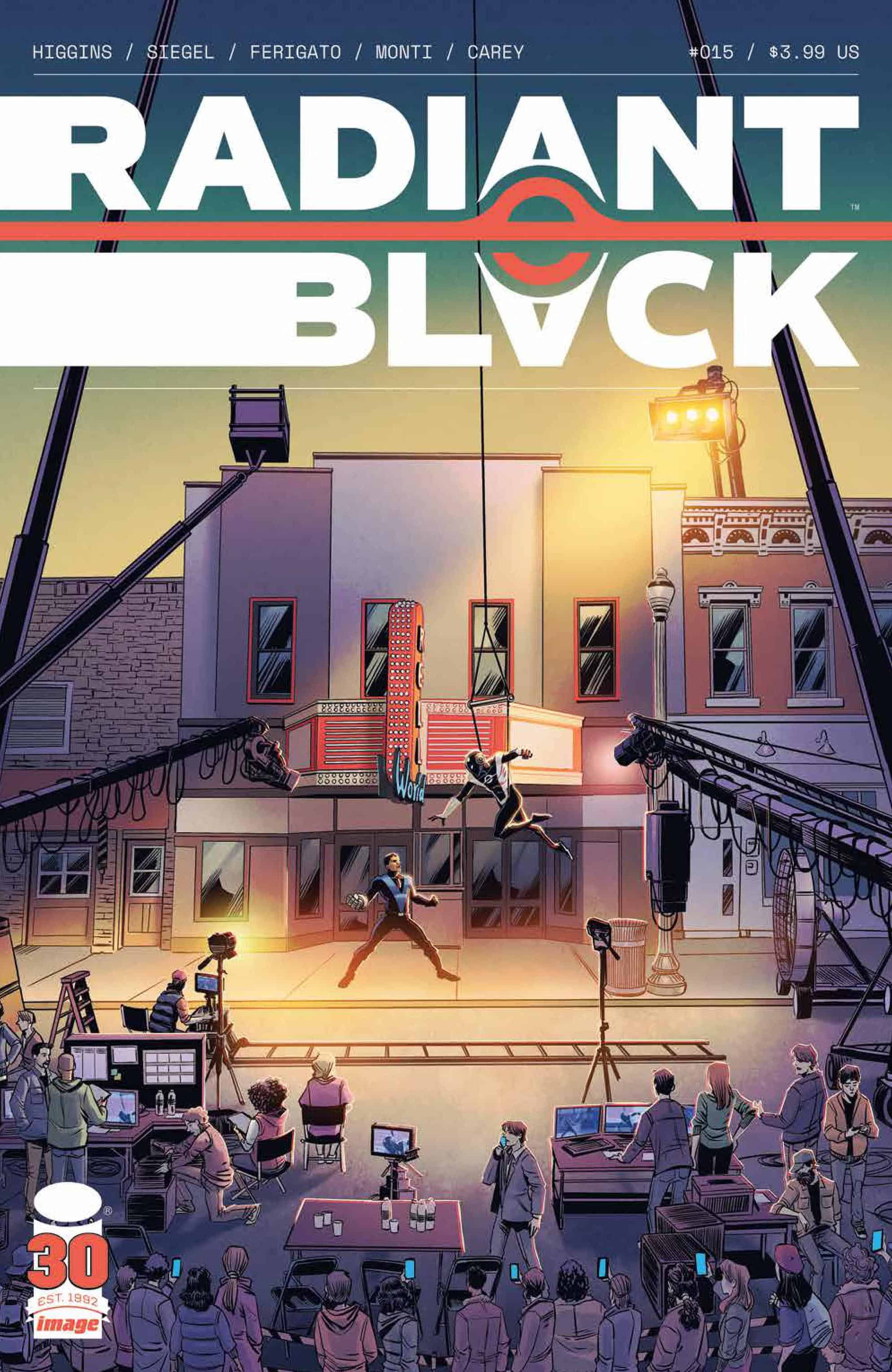 The onslaught of new villains continues as Radiant Black faces off against…Blaze? From C.O.W.L.?

Meanwhile, an unauthorized Radiant Black fan film is being shot in Lockport. When Marshall heads over to offer some friendly advice, he just might face his greatest enemy of all: creative license.

It’s not a stretch to say that Ultimate Spider-Man might be one of the most seminal Marvel runs from the ‘00s. It recontextualizes the Spider-Man origin and early years for an entire generation and was so successful that it propagated an entire publishing imprint for the company. For many readers (myself included) it was an easy jumping-on point for young readers while offering something new but familiar to existing fans.

With Radiant Black #15 from writer Kyle Higgins, artists Eduardo Ferigato and Marcelo Costa, colorist Igor Monti, and letterer Becca Carey, the connections come into greater focus, thanks largely in part to a shared plot; a movie being made about the titular character who has no creative input and a disdain for the project. Radiant Black’s story ends up in a more positive place compared to the Ultimate Spider-Man story, with Marcus getting to contribute to the movie’s script, and Radiant himself getting to do the special effects with the suit’s powers, all in-camera. It’s a nice touch that sets the tone of the issue apart from Spider-Man, which was a byproduct of Bendis’s works, a little grimier and darker. Ultimate Spider-Man was lightning in a bottle, and not until Radiant Black has a book managed to capture the magic of that formative series.

This book, and the issue, in particular, evokes the seminal Brian Michael Bendis/Mark Bagley series and continues to build modern plot points into classic superhero storytelling. It’ll be interesting to see if Radiant Black ages as well as Ultimate Spider-Man with more time under its belt. Not every book that cements itself in the contemporary stands the test of time. For every Ultimate Spider-Man, there are three The Ultimates.

Higgins’s script adds a layer of pathos to Doppler, which is a nice change to the current Radiant rogues gallery. Most of the villains have been played as jokes, pathological hucksters, or detached cosmic threats. With Doppler, it’s hard not to sympathize with the reason she puts on her costume. The issue is light on action, but the script gives a chunk of the conflict to Doppler, revealing a fork in the road for the antagonist; a possible path of redemption and acceptance, or feeding an ever-growing addiction. Higgins doesn’t draw out the decision, as the last page reveals Doppler’s next steps.

Ferigato’s art works in tandem with Higgins’s script to add emotional complexity to Doppler, rendering her almost exclusively out of costume. Seeing the antagonist’s face and conveying those conflicted emotions, combined with directed anger helps to sell Doppler’s p.o.v, and deepen the sympathy for her ailment. The issue is less action-oriented compared to previous arcs of the series, and Ferigato shines with those opportunities for walk-and-talk scenes, something the artist also shares with Bagley’s art. Both artists show the ability to jump between action and conversation with ease, and the linework carries the storytelling forward without the words on the page bogging the pacing of the issue down.

Even if the premise or genre conventions of Radiant Black are not for you, it’s clear that the team is in for the long haul, and they deserve respect for their ability to expand and operate further than the individual issues that make up the series. At the end of the issue, there’s a QR code and link that leads to an animated short film that mirrors the movie being shot in the issue. It’s a brilliant move that once again draws comparison to the trail that Ultimate Spider-Man blazed with an in-canon video game tie-in that doesn’t violate continuity (also done in Bagley’s style that lets players control Spidey or Venom).

If Marvel ever decides to resurrect the Ultimate Universe line, it's clear that the House of Ideas should look to Higgins and company's Massive-Verse for a template on how it can work across genre, mediums, and even publishing platforms. The DNA of Ultimate Marvel is apparent in Radiant Black but the indie universe has the benefit of a more cohesive and tighter core, and a genre savviness that elevates its simple stories. Fans clamoring for a spiritual successor to Ultimate Spider-Man, or an ambitious interconnected multimedia experience set against a rich and fun tapestry, should check out Radiant Black and the Massive-Verse.