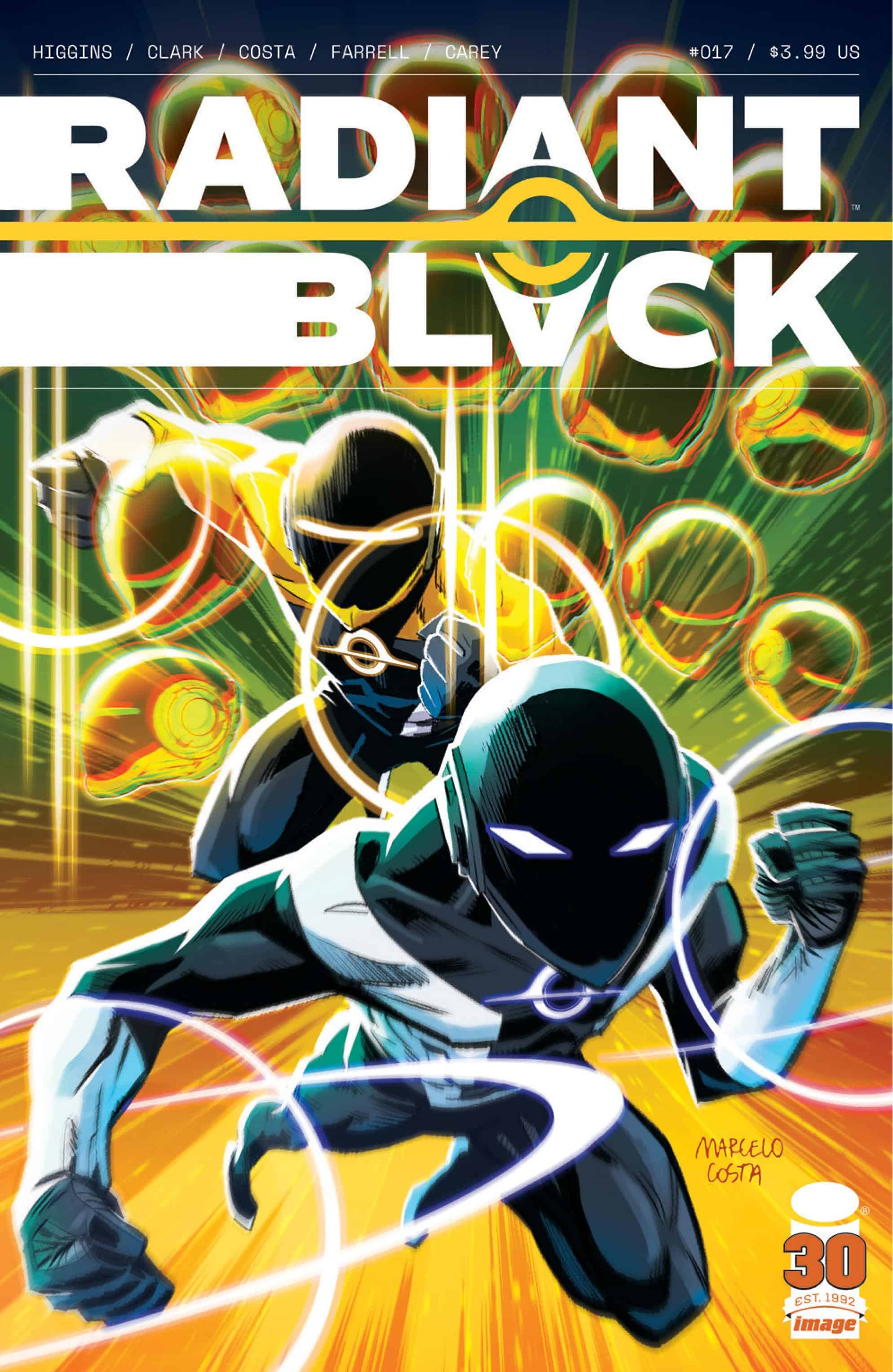 Marshall faces down a gauntlet of enemies, each more determined than the last to take the Radiant from him by any means necessary. He needs a miracle. Will the unexpected appearance of RADIANT YELLOW be enough to turn the tide?

One of my favorite tropes in any medium, but pops up more in anime and comics more often, is the descent of a hero to an anti-hero or antagonist. The inverse of redemption is the character arc of a character starting as a hero but becoming weighed down by their experiences. It’s a great way to set a foil against the work’s protagonist while creating juicy tension and building in a time bomb reveal that can happen at any moment. In a book like Radiant Black, that turn has been seeded and tended throughout the run, and those tensions are starting to sprout in its most recent issue.

Radiant Black #17 – written by Kyle Higgins and Joe Clark, with art by Marcelo Costa, colors by Triona Farrell, and letters from Becca Carey – continues the fight between Radiant Black and the still-to-be-named villain team-up (I’m still pulling for 5yndicate). As Marshall’s on the ropes against the villains, Radiant Yellow, aka Wendell, finds Nathan and recruits him to save Marshall. In this scene, it’s revealed that Nathan still has access to the Radiant, and Wendell’s future sight is explained.

After the explanation, the two return to the local high school, and Nathan becomes Radiant Black, saving Marshall from the villains. Once Marshall wakes up, the two share the Radiant, passing it back and forth and then sharing the costume to take down Mecha. Meanwhile, Wendell sees into the future again and enables Doppler to help the Radiants, using a clock’s bell to wreak havoc on Mecha’s suit. The moment lets the Radiant Blacks get the upper hand and defeat the villains. In a last-ditch effort, the villains release all of their technology and knowledge about the alien tech to the internet, ensuring more villains will arise.

The script’s final delivery comes from Wendell, who’s surprised that Marshall survives the fight. He makes a clear statement that Marshall is going to kill everyone, and it’s obvious now that his erratic behavior is playing into the book’s long game. If using the previous comparison of Radiant Black to Ultimate Spider-Man, then this is the Harry Osborn/Eddie Brock twist. The reveal feels natural and in line with Marshall’s character arc thus far.

The issue doesn’t flex its full spectrum of superpowers clashing like the last issue but contains the action of the two Radiant Blacks sharing their power as they beat the giant Mecha. Everyone gets a moment in the fight, and Costa does a great job of making sure the action never feels repetitive. Even when Nathan and Marshall pass the Radiant back and forth, their styles of fighting are different. Nathan is more aware of his surroundings and incorporates items as projectiles, while Marshall has a much more head-on approach to fighting.

Costa’s pencils make both styles clear, and the effects to illustrate the action and movements reflect that. A panel with Nathan in control might have less kinetic and thinner lines, while Marshall’s scratcher and more bombastic. The two different styles are more pronounced on a later page of the fight where Nathan and Marshall pass the Radiant back and forth across four horizontal panels. Those various styles come together and even the other out in the final punch of the fight when the two share the Radiant costume.

The other superpower that gets a great visual representation in this issue is Radiant Yellow towards the start of the issue. It’s a single panel, but the echoing effect of the Radiant’s helmet oscillating between potential timelines or events is great, and Farrell’s colors amplify the panel. The black mask is set against a yellow-green background and the outline of the mask is highlighted in other colors that give an almost 3D effect. It’s a wonderful bit of texture to the moment that gives a sense of motion that is out of sync with the 2D aesthetic of the comic, conveying that Radiant Yellow is moving through time rather than physical space.

Radiant Black #17 resolves the first supervillain crossover of the Massive-Verse and sets up a potential looming threat in the form of Marshall. The issue is an excellent showcase for Costa’s art and Farrell’s colors to distinguish the various Radiants and the villains, juggling multiple powers and fighting styles. This issue bookends the current arc, and makes for a great place to catch up with Radiant Black as the book seems to be moving toward a character-driven and emotionally charged conflict between the Radiants.