Radiant Black #18: 4 Radiants Sit on the Edge of a Cliff… 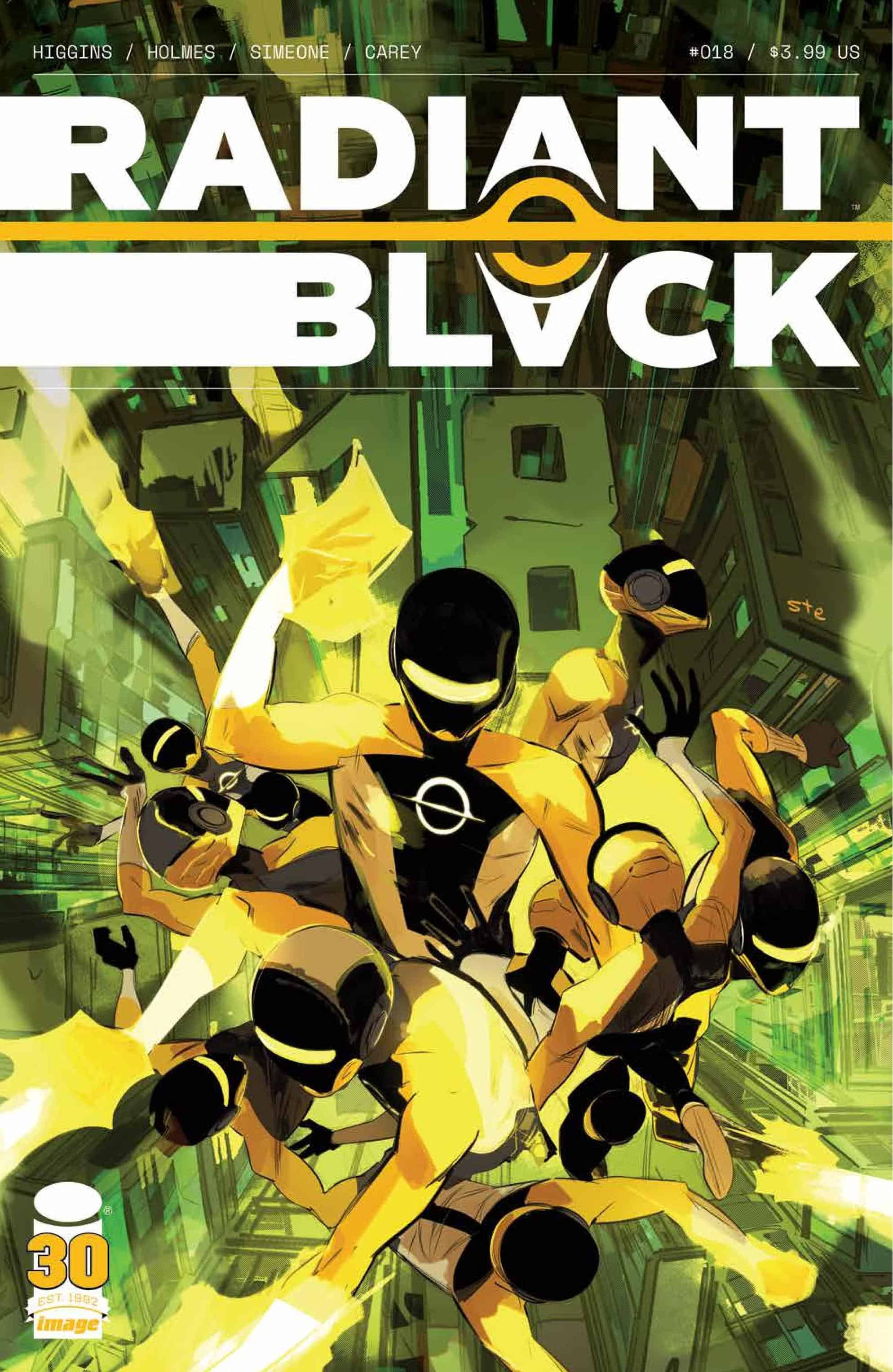 It’s 1979. Wendell George graduates from Purdue with a degree in engineering and plans for the future. It’s 2020. Wendell George discovers a cosmic artifact in a donut shop. It’s 2023. Everything has fallen apart.

Comics offer an interesting intersection of technology and reader engagement. As the medium has evolved and moved to a digital format. The shift has changed the physical act of handling a comic, and how it’s examined, seen, and experienced. Things like the guided view help focus on a panel-by-panel flow or pinch to zoom lets a reader see the tiniest details. A perfect example of this change in experience is Scott Synder and Greg Capullo’s Batman #5. In the sequence where Batman is lost in the Court of Owls’ labyrinth, the layout of the pages begins to rotate.

It’s a symbolic composition that reflects Batman’s mental state as he finds himself more and more lost, and requires the reader to physically change the perspective of their comic to experience the story in the correct direction. With a physical comic, the process of turning the book is easy but becomes more complicated when doing this on a phone or tablet. Most devices support an auto-setting for screen rotation and thus impose an additional barrier to experiencing the creators’ intended effect. Either the reader has to know beforehand to disable the setting, which takes the experience out of the moment, or they have to stop reading to do so. In both cases, this breaks up the flow and takes the reader out of the sequence, which otherwise would have been smoother by reading the comic in a physical form.

Radiant Black #18 – written by Kyle Higgins and Laurence Homles, with art and colors by Stefano Simeone, and lettering from Becca Carey – is another one of those issues that play with the linear format of sequential art, utilizing a structure of four separate narratives across each page. The issue serves as the origin story for Radiant Yellow (Wendell), showcasing four separate points in his life: the time leading up to the birth of his daughter, his daughter’s 18th birthday, the time leading up to the events of Radiant Black, and then an undisclosed time in a post-apocalyptic future.

The sections of life appear in that order on the page, itching taking the fourth space to tell its story. As Wendell prioritizes work and career, he grows further from his family, missing more and more events. Meanwhile, he works to survive with a companion in the future, as timelines then coalesce and Wendell in the present knows what he must do to save the world.

The issue is difficult to read in a digital format, and it’ll be curious to see if it flows better on the physical page. Just like the Batman issue, seeing this composition of four storylines across the page requires a shift in the way the comic is read, and when reading each page in an isolated chunk, rather than seeing it as a series of 2-page spreads, it throws the flow off at the beginning. That limitation strips some of the momentum from the story, as the reader either has to keep jumping from section to section of the page or read through each storyline and receive broken chunks of a story.

It’s possible that may be the creators’ intention, as Wendell sees possible futures and events, but the feeling from reading the issue is less a deliberate sense of confusion and more a result of a difference in delivery. It’s hard to keep track of the various plotlines going from page to page, but is still more clear than other attempts at a similar format, like that of Crisis on Infinite Earth, which used a split structure but only did so at the bottom of the page for the separate story. The plot does come together by the end, and the storylines link expertly as the narrative catches up to the present(ish) day.

Simeone’s art is strong in this issue, breaking from the more action, blockbuster feel of Marcelo Costa, and instead giving a scratchier, more worn style of linework. The change is like seeing an up-and-coming indie film vs the most recent popcorn flick, and the timelines change in style is a welcome addition to the experimental format. Simeone does an excellent job in the composition of individual panels on the page, and there are moments where panels will echo an expression or moment that packs a power punch.

In the micro, the structuring of the issue is a great strength, but in the macro, that gets lost across the various timelines. This again is hard to tell having only read the comic in the digital format, but at least on the digital read-through, those moments blur and lessen because of the difficult tracking of the plots. Simeone’s art and colors sell each point in time well, and it’s never confusing what version of Wendell is being depicted in time. The aging process is clear, and the art is at its best when Wendell sees burdened, the linework imbuing a sense of weariness that only grows with every passing panel. The future storyline also gets to display some of the action the series is known for, but it’s rooted in that weariness, and thus is not the vibrant mass of spectacle like in Costa’s issues.

Radiant Black #18 is an attempt by the creative team to play with the book’s format and structure. It succeeds in the small picture, but at least in a digital reading ecosystem, the concurrent timelines are hard to follow. The actual emotional arc and plot are strong and help deepen Wendell’s character, but the presentation tries to mimic his Radiant powers but instead undercuts the flow of the story. Paired with Simeone’s art that sells the world-weariness of this character that’s seen the future, the issue had the chance to be a strong character study. Instead, it's a decent story that swings for the fences, but its experimental structure hinders more than it helps.

Radiant Black #18: 4 Radiants Sit on the Edge of a Cliff…