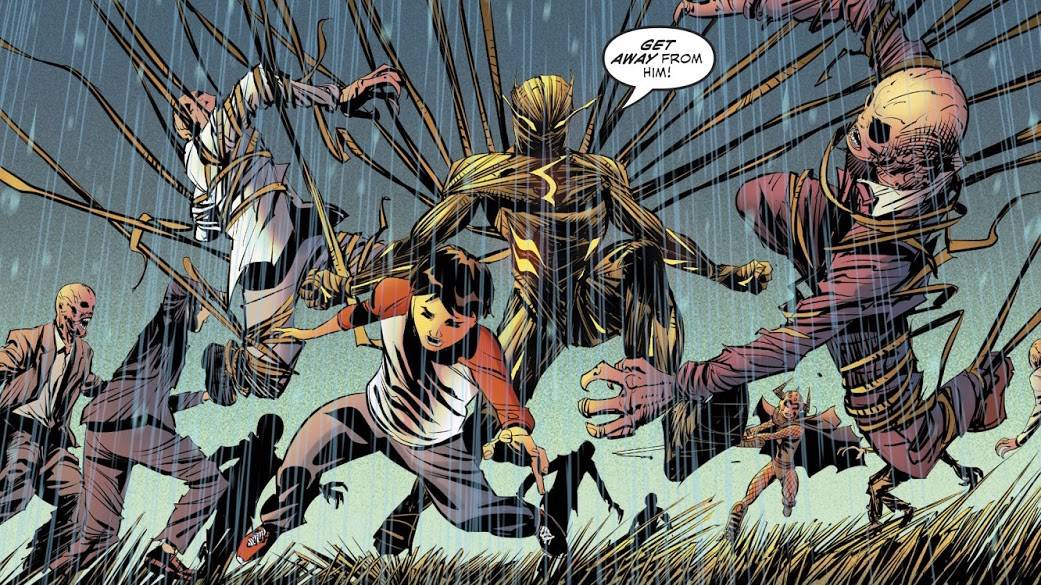 Rory has one chance to save his friend’s son from demonic possession, will he and Etrigan be able to help the boy in time? Or will Frank Jr. be lost to the legions of Hell? There are darker forces at work here… 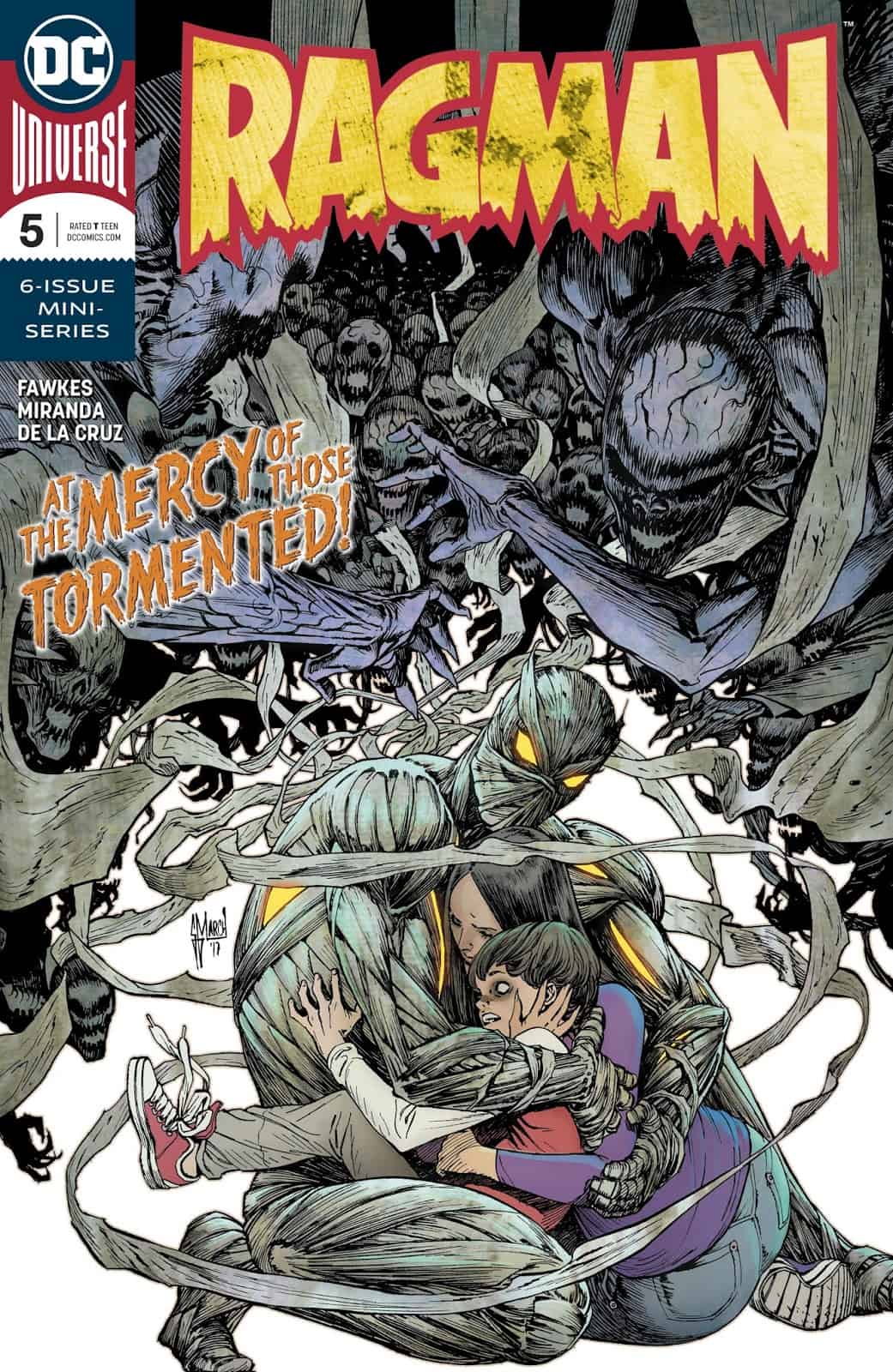 What You Need to Know:
Rory Regan was on patrol with his unit in Israel when they discovered a hidden temple, once inside they were assaulted by spectral assassins from all sides! Only Rory survived, emerging with a magical cloak that can absorb souls, including those of his fallen comrades! Now he is the Ragman, sworn to protect the world from demonic forces, now, with the help of Etrigan, he is fighting to save the very soul of Gotham City!

The forces posing him have their ways though. They have captured the son of one of his friends held within his cloak, now Rory will stop at nothing to get him back, despite Etrigan’s protests.

What You’ll Find Out:
We pick up right where we left off, with Ragman and a possessed Frank Jr. squared off in Frank’s house. Rory tries to convince Frank Jr. that he’s on his side, that his father is in there with him. Frank doesn’t believe him, as the demon starts to take a stronger hold of the small boy the house begins to collapse. Rory quickly grabs Frank and his mom and runs them outside, as they run a gigantic clawed hand reaches from the void starting to form where the house was. 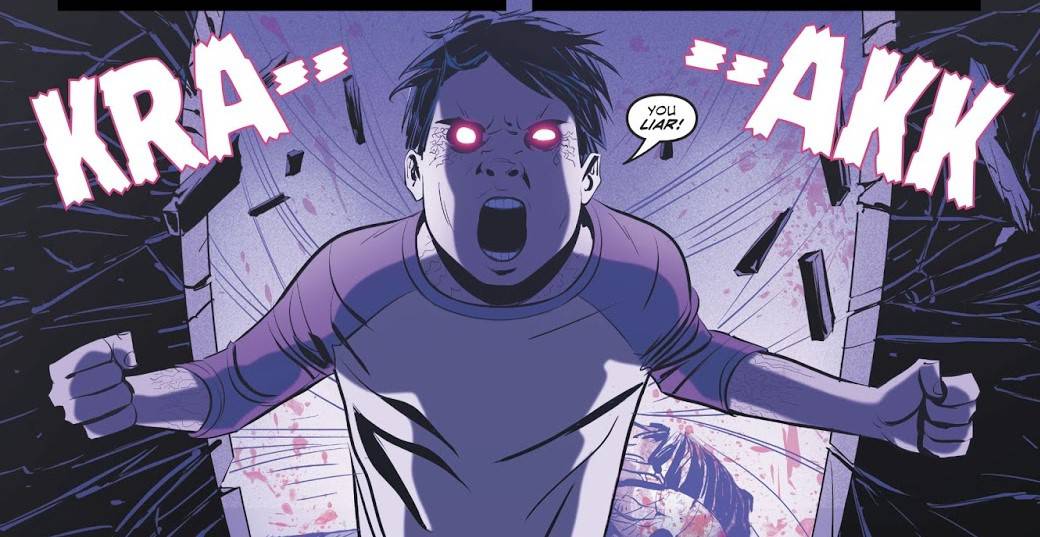 We cut to Etrigan standing outside the house, as he talks a crowd of possessed monsters begins to converge on him, paying little mind to the demon in their midst initially. Suddenly Rory emerges from the collapsing house with Frank Jr. and his mom in hand, he drops them in a safe spot and turns back to the house just as a shining figure walks up, Ystin of Camelot is on the scene! She tells Rory he needs her help (detailed below) as they talk the house explodes and a gigantic demon bursts out!

Rory begins to fight off the monsters as Etrigan faces off against the giant demon, as Rory attacks the monsters Ystin tells him to be careful. She uses magic to restore Rory’s human sight. telling him the demonic sight bestowed on him by Etrigan is twisting his perspective. As the enemies come into focus in a new light Ragman sees them for what they are, possessed townspeople, they don’t need to fight, they need help!

The end of this issue is killer, pick up a copy for yourself and find out! What an ending! 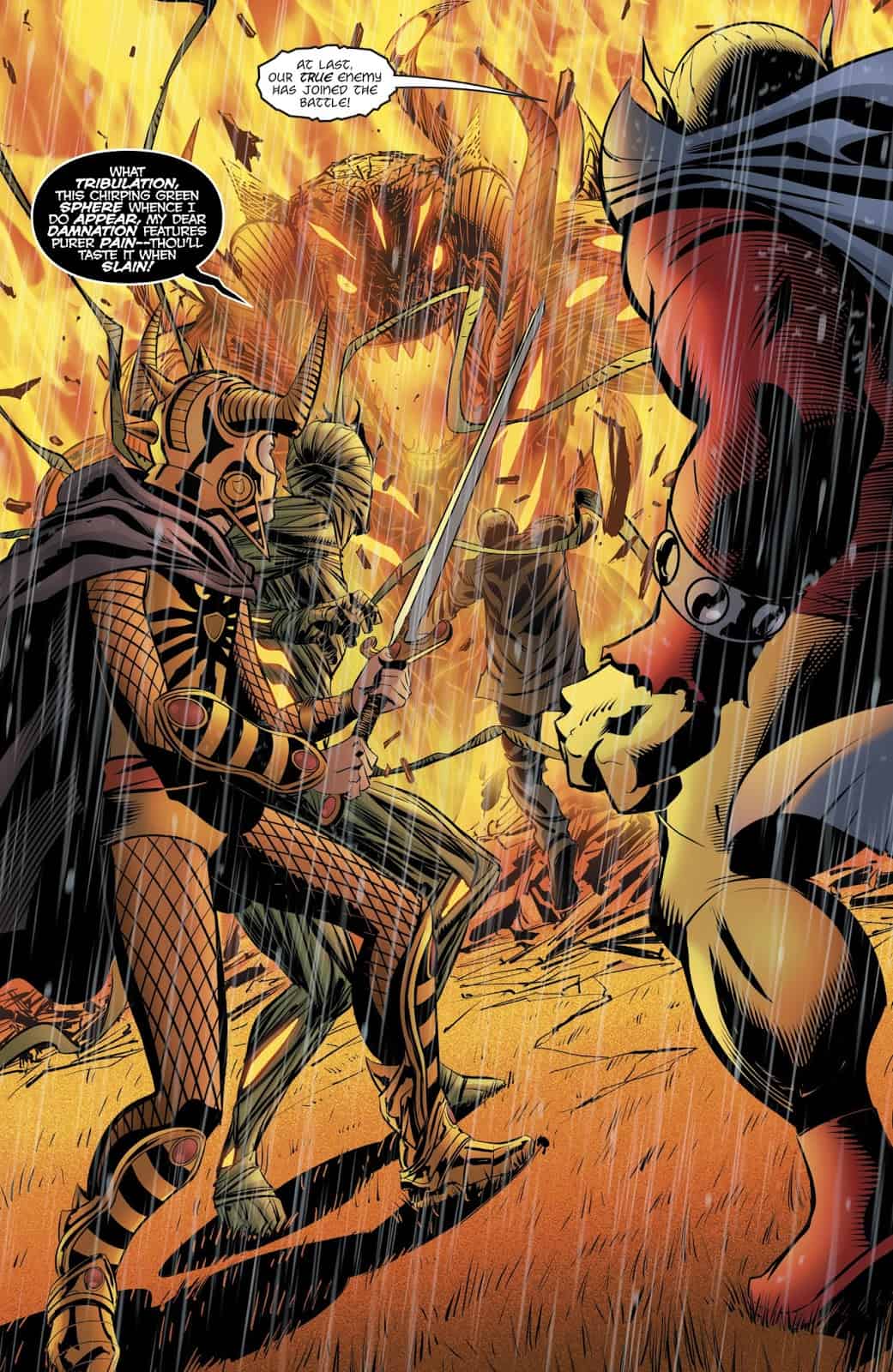 Goodness, this was an awesome issue, I can’t wait for the finale! This issue was paced pretty fast, I do wish I knew more about Ystin, I’m a bit clueless in matters of the supernatural in regards to the DCU.

The scene where Rory is running through the house as it disintegrates took me a couple readings to really figure out, love the slow reveal of the giant demon over a few panels, and the shot of the house exploding is epic.

I will say it was a little strange the Frank Jr. problem was dropped as soon as they left the house, although granted a couple bigger problems did come up in the interim. I love the way the bigger demon speaks in a different rhyme scheme than Etrigan, an excellent detail that helps keep the dialogue from blending together too much.

This series remains one of my favorite minis right now, sad it’s got to end soon. The story and the art are so very well done.

This mini has been a nonstop blast! Tons of fun and a lot of action, a great jumping on point for the character for new readers, despite the change to the suit. I can’t believe it’s nearly over!