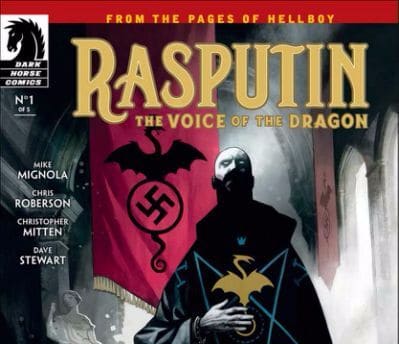 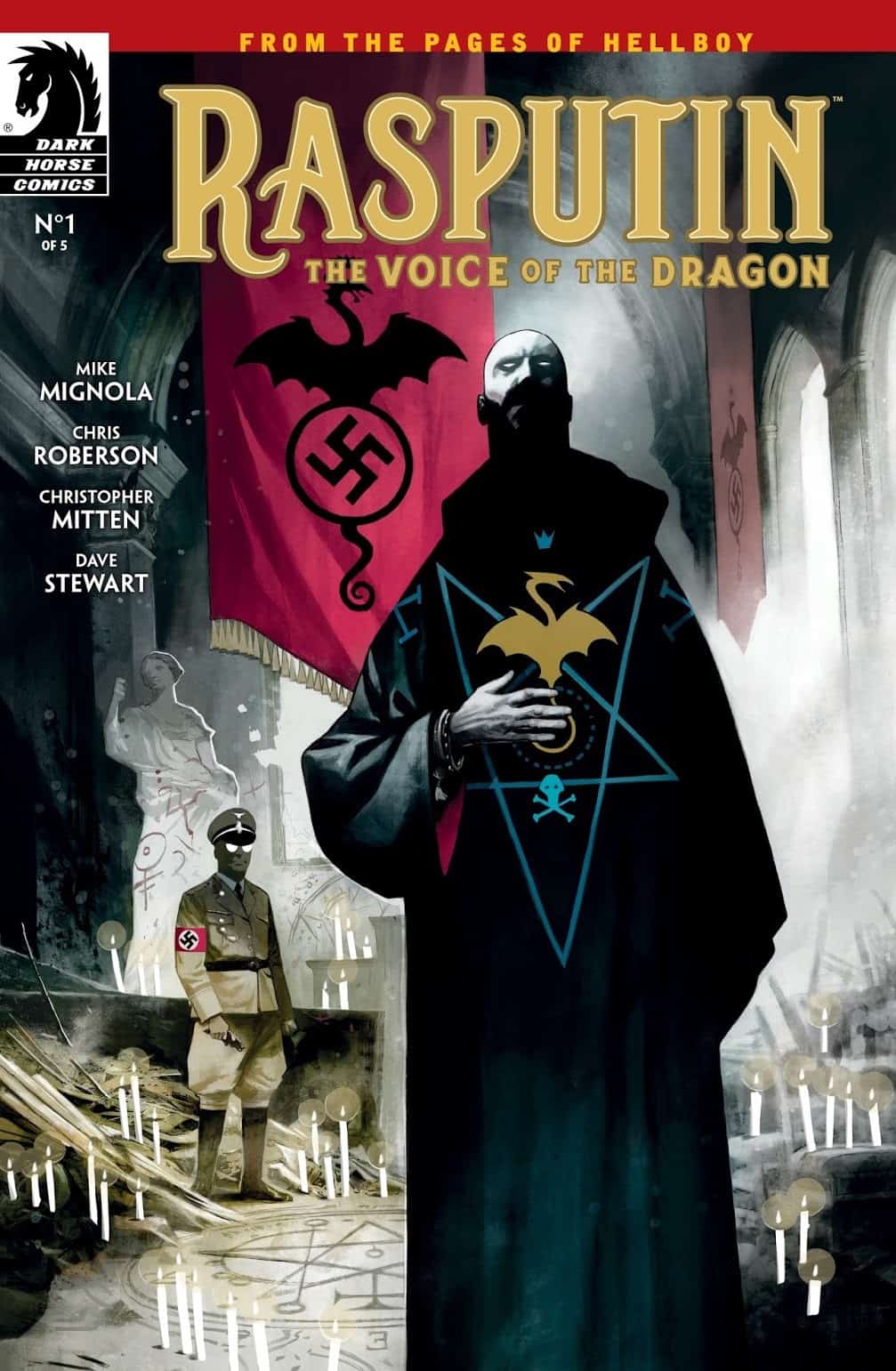 Before the arrival of Hellboy war is coming and it has all the hallmarks of the occult that could sway the course of history. Ancient Egyptian cults and Axis spies are the order of the day, whispers of ghosts and possession are abound and zombies walk the earth. In a story almost 25 years in the making we are witness to the events that lead to the arrival of Hellboy and the creation of the BPRD.

RASPUTIN: THE VOICE OF THE DRAGON #1

The mad monk Rasputin is alive and well after his apparent demise in 1916, brought about by the Russian nobility in their many varied attempts at assassination to stop his thrall of the Tsar. Britain is thrown into the full might of battle against the Third Reich and Trevor Bruttenholm has yet to gather the network of paranormal investigators that comprise the core of the B.P.R.D. along with the rather special investigatory agent and adopted son Hellboy.

We begin in Italy in 1937 and Hitlers Inner Circle is on a recruitment drive to adapt as many weapons in their arsenal as they can to aid them in overtaking the free world. Himmler himself stumbles upon the reclusive Rasputin at a decidedly sinister alter bearing the mark of a dragon and pentagram, attempting to commune with…something. Asked how he survived St Petersburg, Rasputin recounts a tale of his near death at the hands of Russian nobles, culminating in communion with a dragon who shows him visions of a future in transformative flames and he is afforded glimpses of others who have been so similarly blessed, who are seemingly compelled to document what they see. But Rasputin has only scratched the surface and wants to know more. Himmler looks almost plaintive as he suggests joining forces to better attain their joint goals. Rasputin scoffs at the idea of colluding with the enemy of his mother country until he hears the plans for the future that include an empire set to rule for thousands of years. 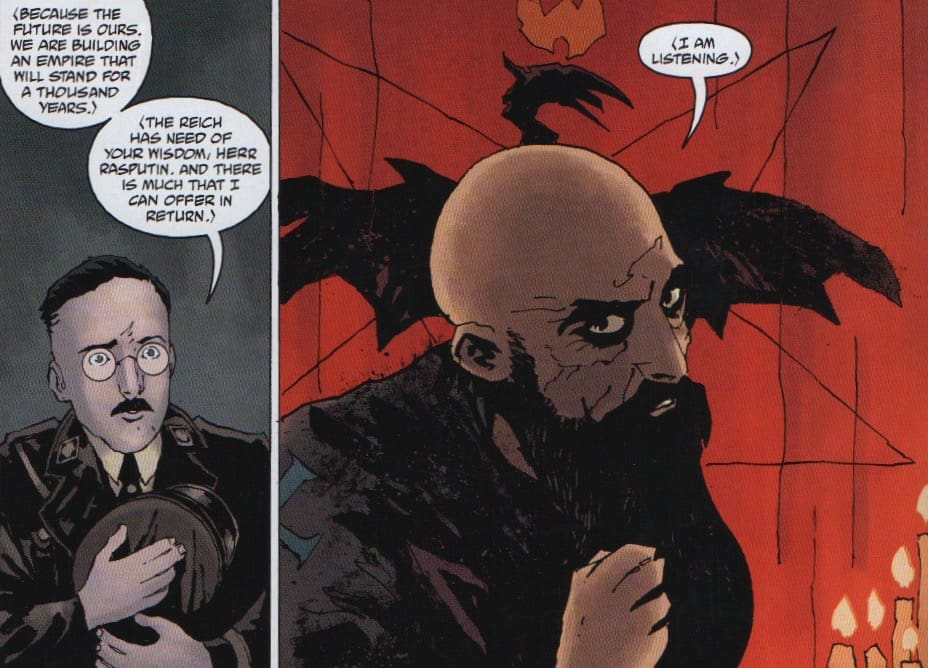 1941 and Trevor Bruttenholm is just one of a team of codebreakers in Bletchley Park trying to decipher messages they intercept in order to halt the progress of the Nazis. Rubbing shoulders with Egyptologists, mathematicians, and historians he pores over documents seemingly filled with gibberish. One such document has confounded one of his colleagues, Samantha who dismisses its mention of the German word ‘geist’ meaning ghost. But this strikes a chord with Trevor who has seen its like before and rifling through the archives compares the two and finds they also contain a sequence of numbers which allude to coordinates of a village in Hertfordshire. Digging deeper he finds other such references to coordinates and the term ghost and asks his superiors to allow him to investigate. The consensus though is that it is nonsense and even with his insistence the ghost can also mean mind or spirit his credentials are called into question. They warn him to forget the issue as there are more pressing matters to attend to but agree that he is at liberty to do what he wants on his own time. Whereupon he reminds them he has a few days free time coming and sets off to do just that.

Arriving in Hertfordshire to investigate he is greeted by the church groundskeeper who admonishes him for his delay. It seems he has reported an incident recently to the Government and though he admits he thought they had written him off as a lunatic, he recognizes that’s who Trevor works for. He repeats his tale to Trevor of leaving the pub one night and witnessing three figures in the graveyard acting suspiciously. Describing a hooded man, a smaller man and another on his knees, who he says he overheard talking anxiously in German while struggling in front of a grave. After a flash of light the panicked man was seen to stop struggling and no longer be talking in German but sounded like a British toff and the other two led him away talking about his ‘eternal reward’. The groundskeeper takes Trevor to where they had been standing and shows him the grave of one Albert Mayhew. 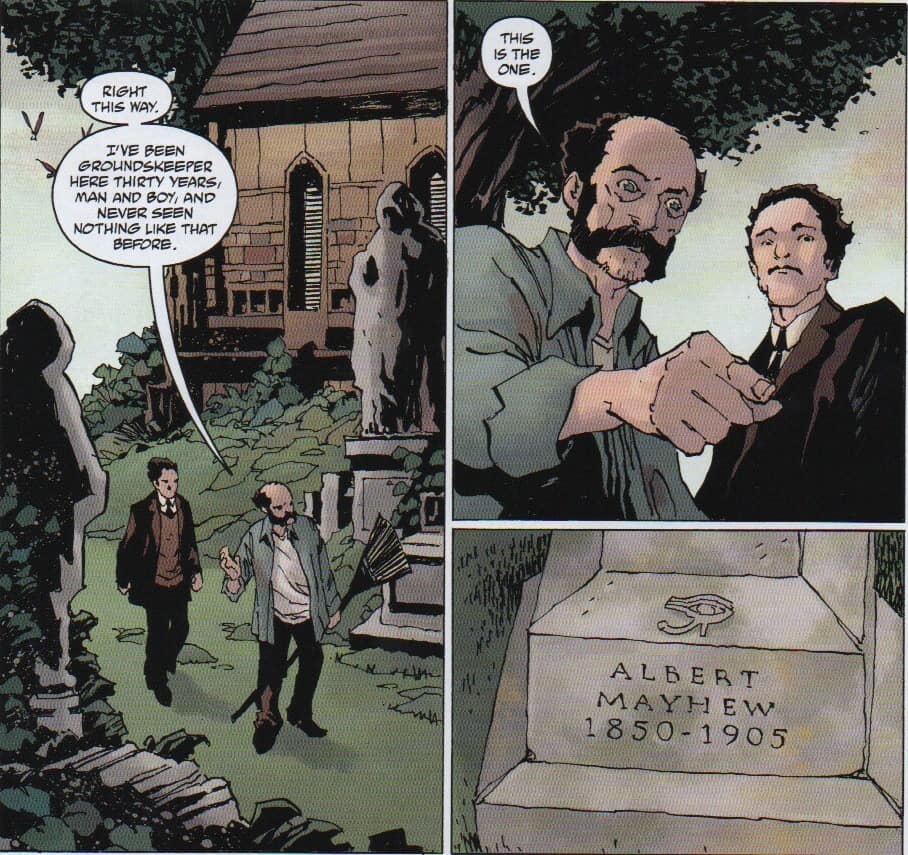 On arrival in Essex to stay with his uncle Simon we learn Trevor had once resided there before going off to work in Bletchley. By revealing the barest details of his investigation, as well as the fact it is being conducted in his free time, he gets around the restrictions of the Official Secrets Act. Both agree it is a case of possession and Trevor wonders why Mayhew’s grave, in particular, was so important, mentioning he saw the Eye of Horus on the headstone, leading him to guess the involvement of the Heliopic Brotherhood of Ra. At the mention of this Simon insists he drop the case revealing his friend Sir Edward Grey (from Mignola’s ‘Sir Edward Grey: Witchfinder’ story of 2009) has had experience of Mayhew and this group and some darker elements within the H.B.R. had caused great tragedy for Grey and those close to him before he managed to put a stop to them and spent the last years of his life obsessed with their total destruction. Simon himself, however, insists not all of the group warrants such cause for hate and has made friends with some of them, although he regrets not being able to stop Mayhew, their leader as he was to die having caused the deaths of many innocents. Trevor agrees to leave it there but secretly resolves to continue. Upon receiving a call from his friend, Harry Middleton, who will soon be on nights leave Trevor arranges to meet him to catch up for a drink halfway, on his way back to Bletchley. Deciding to stop off at the churchyard on the way he arrives to find an open, empty grave, a sight that puzzles him so much he fails to notice the nearby brutally broken body of the groundskeeper. 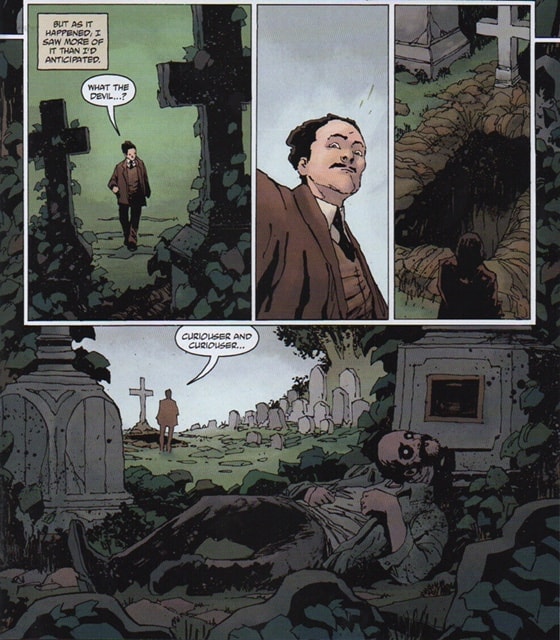 Last orders in a Harpenden pub finds Trevor and Harry catching up and Harry informs him he will be heading out again for a week for parts unknown and they drink to a safe return. We learn their friendship dates back to University days when both shared an interest in the occult as they reminisce over old cases and the loss of their friend Billy Connolly in their Eton ghost club and hope for better days ahead, when the front door crashes open loudly and the shocked punters are panicked at the sight of a reanimated corpse shambling in, eyes aglow with an inner eldritch glow begging for help… in German. Trevor attempts to communicate in broken German and asks if he speaks English, causing the zombie to launch itself at him. Luckily a resourceful Harry pulls a gun out and blows its head off and Trevor muses how their days of spiritual investigations are far from over as a pendant bearing the Eye of Horus is revealed in the detritus of the remains of the reanimated attacker. 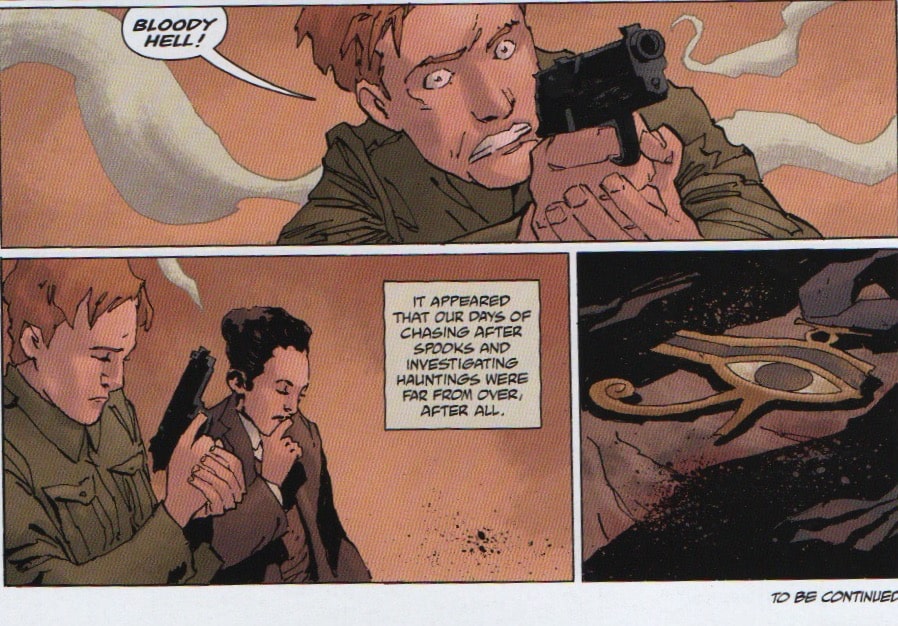 Since his first appearance in August 1993 Hellboy has taken the occult world by the throat and beaten it into submission, but we see here his father Trevor Bruttenholm using a much more subtle approach to investigate matters of the occult. One can only wonder how the apple fell so far from the tree but it also informs us of the great difference between father and son. Bruttenholm works in a more circumspect way here as he doesn’t yet have either Big Red or the power of the B.P.R.D. behind him not to mention the full backing of the Government. We don’t yet get to witness the powerhouse pyrokinetic Liz Sherman or the aquatic, poetic Abe Sapien to aid Trevor in his investigations and it is refreshing to see him use a different approach to his protégés. Though I do miss seeing Mignola on art as his individual style always suits the narrative the team of award-winning colorist Dave Stewart and artist Christopher Mitten are a very apt replacement. Especially in the scene within the pub and the piercing stare of the undead interloper. 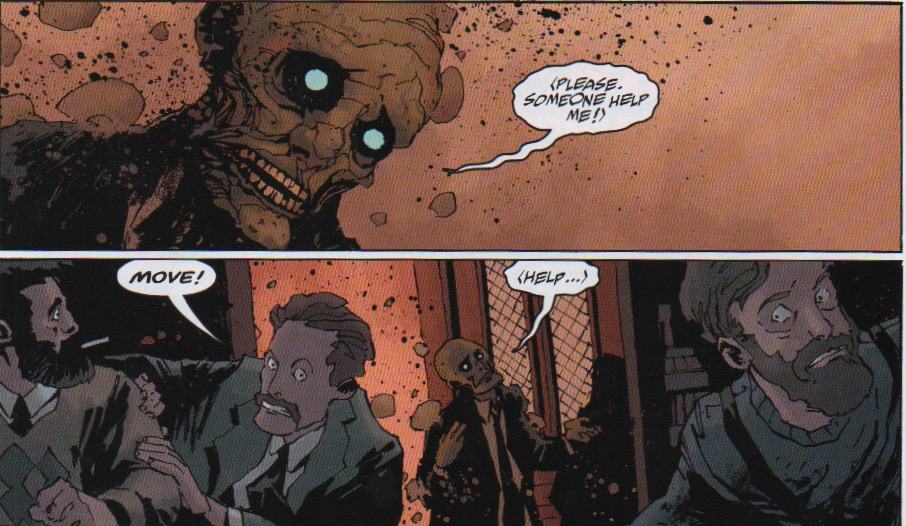 The feel of the time also seems right on the nose here in that pubs are on blackout alert in anticipation of Blitz attacks and Bletchley Park is on the lookout for coded messages and even the world of the occult can be grounds for suspicion. Also, the beginnings of the Third Reich are in believable stark contrast to the full-scale horror we are used to seeing in media. A slow time-bomb is ticking inexorably in the background here and it builds momentum in a truthful, sinister way. The appearance of the mad monk so instrumental to the arrival in our world of Big Red is reassuring to see, even as brief as it is, as is the meeting at the very start between himself and Himmler, as Rasputin once recounted that meeting to Hellboy himself in Seed Of Destruction. I only hope we get to see his cohorts Ilsa Haupstein, Kroenen, Von Krupt and maybe even their rivals and Bruttenholms allies Malcolm Frost and Cynthia Eden-Jones when they face each other that cold fateful night in East Bromwich. Similarly the nighttime graveyard workings of Rasputin and his cronies as well as the otherworldly light mirrors that of his very first appearance in the 1993 premiere and it looks like this will link in very well to that. 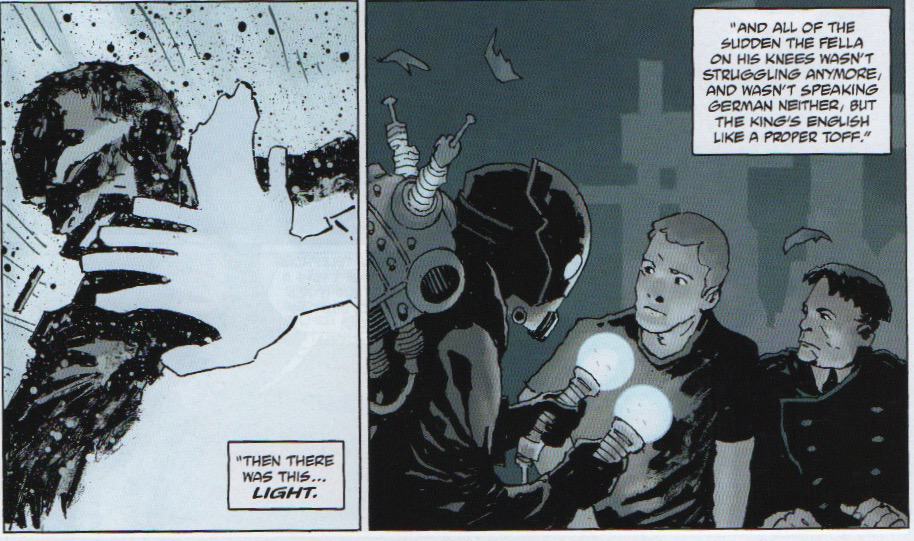 Final Thought: Mignola and iZombie co-creator Roberston have teamed up before on Hellboy projects and it is clear that they work as comfortably as hand in glove together. With the art of Mitten, illustrator on Rise of the Black Flame, as team-ups go it’s as illustrious as those of the likes of Depp, Burton, and Elfman. You know what you are getting and it doesn’t fail to deliver. The score here is an unmistakeably recognizable refrain. If you listen closely you can almost hear it can’t you? The approach… of Hellboy!