Red Sonja #1: Who Is This Child 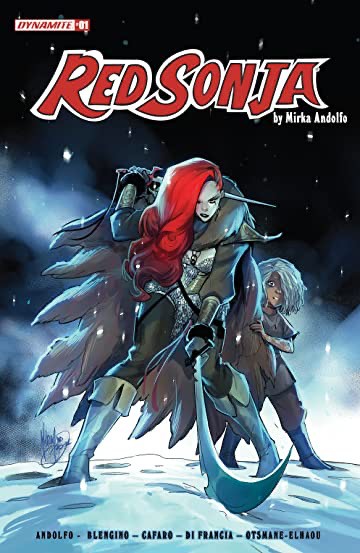 MOTHER, PART ONE. Industry icon MIRKA ANDOLFO presents an all-new vision for the She-Devil With A Sword, in a thrilling new ongoing series! Our story begins in a village on fire, set by members of the dreaded Three-Eyed Shezem. When Red Sonja arrives, the only survivor of the flame is a lively child with curious white tattoos. The child will become Sonja’s travel companion, on a journey from hardened ice to imposing forests, where dangerous secrets wait to be revealed…

I like Sonja’s design in this new series.  I find that her attire is more appropriate for a warrior, she is covered more in armor and she looks like she has leather pants as well.  There have been changes in Sonja’s look before but it has never stuck, I would like this look to stick.  She is drawn beautifully but not over the top sexually.  I admit that I do like the in story reason for her usual costume, being a distraction to her male opponents and I do believe that to be true, I just am happy to see her more modest here.

The villains here are grunt soldiers.  The true villain is the warlord that Sonja is after.  There is not much preamble and I am happy to jump right into the action of this story.  Soon we learn what Sonja is really after, the child Sitha.  Who or what she is we do not know and I would like to know why she thinks Sonja is her mother.

This story does seem to be going where I have seen Red Sonja stories go countless times.  Sonja mentoring and training a girl to become a warrior like herself.  This time however the girl consistently thinks that she is the daughter of Red Sonja.  A relationship that Sonja adamantly denies.

The ending of this issue was definitely surprising.  Sitha is different but I did not expect her to be a sorceress.  I particularly liked her hair being depicted as red right after the forest caught on fire.  Sonja might not be the hero of this story after all.

This is a switch, The child Sonja is supposed to rescue ends up saving the warrior herself.  Who is this girl and is there a connection to Red Sonja herself?

Red Sonja #1: Who Is This Child