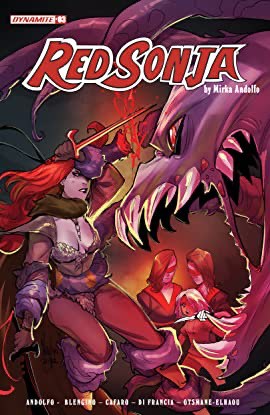 The She-Devil is in pursuit of warlocks in the swamps of the Koroths River. She will need the aid of a renegade slave, in order to battle necromancers. It is a battle of dark arts, against hardened steel.

The art in this issue is fanciful and fun.  This issue is full of monsters and sorcery and that makes the fanciful appropriate.  This is not the typical heavy sword slashing story.  I absolutely love Red Sonja’s costume in this story.  It really looks much more appropriate for battle with the leather pants and sleeves.  It is appropriate since the plot of this story centers around a young girl, a very powerful young girl.

I typically notice a cartoony element to the art in Red Sonja stories.  The art centers on the mystical and magical and typically places Sonja, herself a magical character if not a wielded of magic herself in this world.  She usually hates this and she always ends up in this type of situation.

The lettering used in this issue is interesting.  The typical lettering is black but when the child is referred to as “daughter of Fire” the color used is orange while When Red Sonja is called the Red Lady the color used is red.  Does this indicate a relationship between the two characters?  The girl, constantly despite Sonja’s protest, refers to Sonja as her mother.  She is old enough to know who her mother is.  The other lettering technique is the spell casting of the twins.  The color used is green which perfectly matches the depiction of the magical energy the two create.  It creates a sense of real power even though the language used is indecipherable.

This gist of this story is Sonja fighting her way to rescue the child from a brother sister team of magicians who seek to increase their power and influence.  In the end it appears that Sonja may not have rescued the girl after all.  She may have rescued herself from these two and now she may need someone to rescue herself.  The Red One or She Devil in this story may not be Red Sonja after all.

The mystery of this girl increases.  She is very powerful but it is an untrained raw energy that if not properly harnessed can be very dangerous.  Can Sonja find that guidance for her or will she have to eliminate a possible threat?  Given Sonja’s character, she will stop at nothing to save this girl.