Red Sonja #8: A Contest of Hope 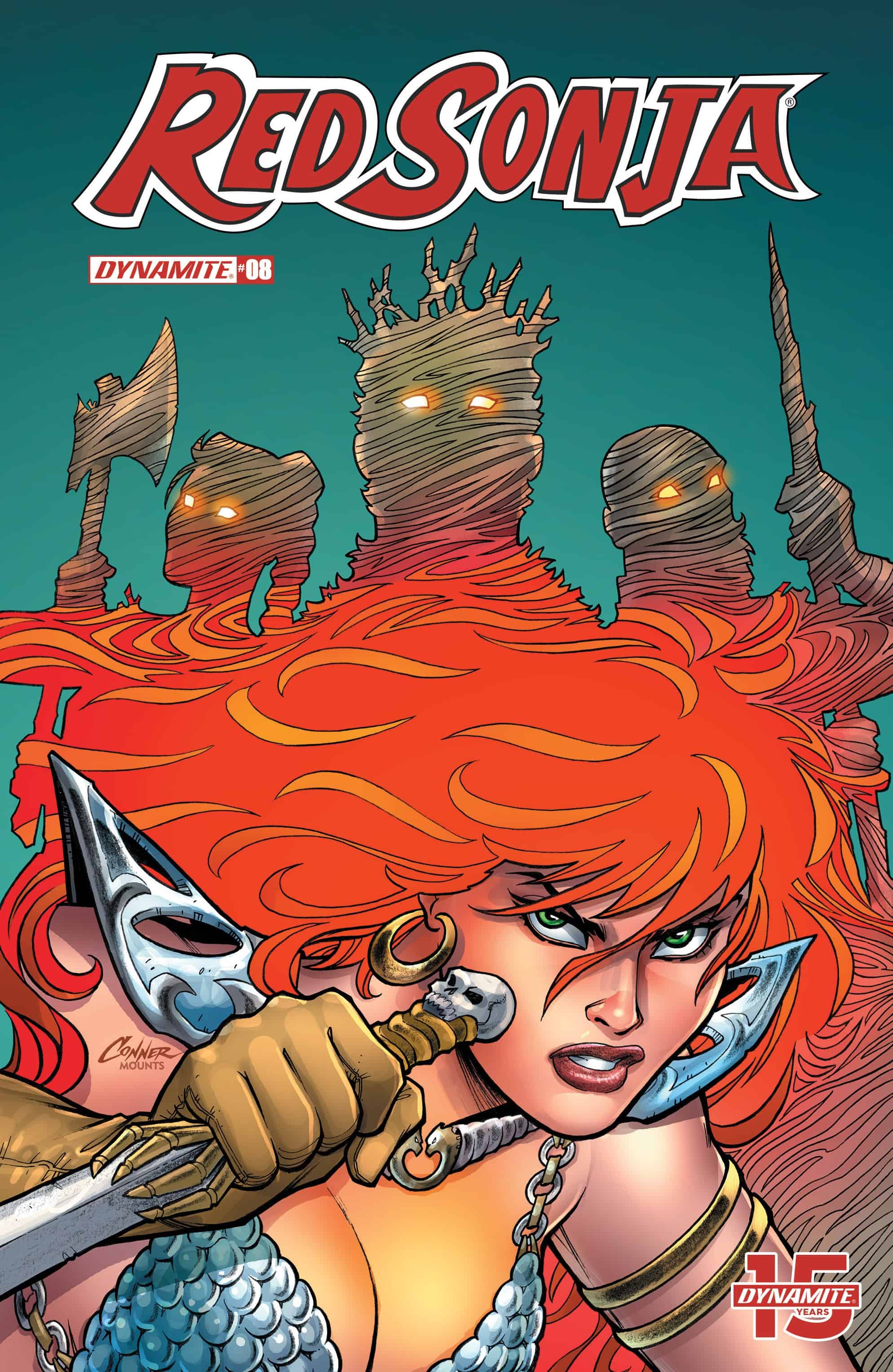 Hyrkania burns, from flames allowed by its ruler, Sonja The Red. In The Clearing, Lord Oak will hear her call for alliance with the woodland tribes. But trust does not come easily to either folk.

The epic story featuring the Zamorans’ attempted conquest of the Hyrkanians led by Queen Sonja the Red continues in issue #8, a fateful story of the consequences of war and the importance of information. 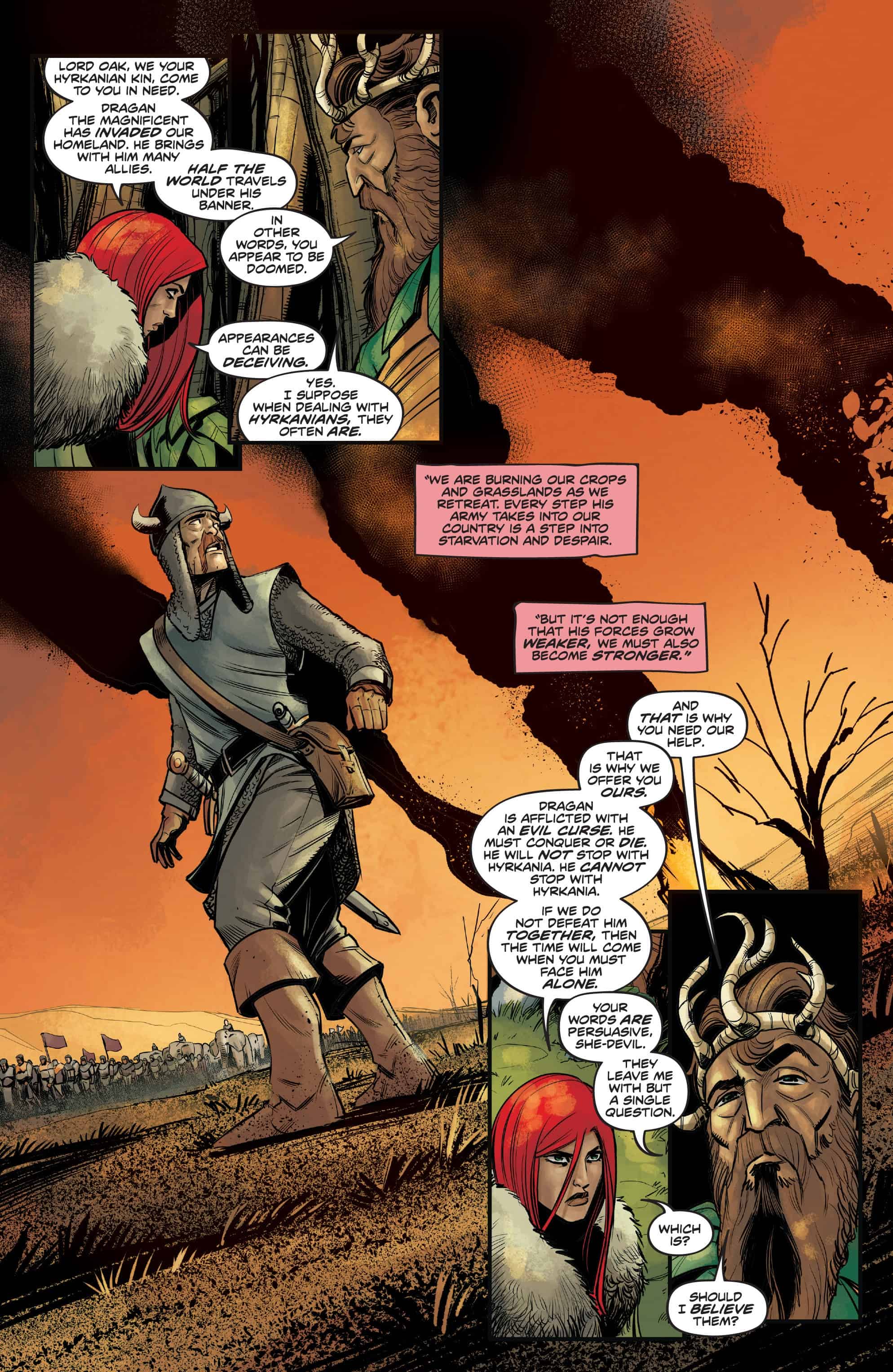 At this point in the series, if you aren’t along for the long format of this story, you simply won’t feel as welcome to what is going on. However, for those who have followed the events of Queen Sonja’s struggles so far, this issue proves to be a powerful reminder of the futility of war and the cost of bloodshed it brings. Instead of following Sonja on her lonely ventures killing one bad guy after another, this series is focused on delivering a remarkably expansive story with a lot of moving pieces.

With another player in the game of conquest introduced, Lord Oak the Protector of the Woodland Tribes, we find Sonja in a unique position bargaining for help. Though it feels different for her, we know this is a just one step in a long plan she has conceived to finally win against the Zamorans. But in war, things rarely as planned. Due to the way this issue is structured, it feels as though it is going to be a predictable filler featuring Sonja brokering a deal for assistance with the Woodland Tribes.

That isn’t at all what occurs, though.

Things go south rather quickly. Foghor, the inside rat who infiltrated Queen Sonja the Red’s council sows division in the ranks of the soldiers, and finds those willing to accept his offer to attack Queen Sonja in the name of Lord Oak, making it seem as though he has denied her request. It is in this shuffle of events that it becomes clear that Sonja isn’t completely in control. She is a powerful warrior, no doubt, but she still has lessons to be learned when it comes to conquest and warfare. This helps to humanize her, allowing us to relate deeper to her personal struggles as well as those of the Hyrkanians. The result of this betrayal is the unfortunate capture and likely death of Lord Oak, as well as the subsequent burning of their entire forest.

The narrative is layered in truly interesting ways, revealing crucial bits of information at just the right time to help the overall story push forward at an enjoyable pace. Yes, this creative team is playing the long game with one cohesive story, but if you can accept it for what it is, it’s easy to see they are pulling off something that is both exciting and refreshing. The artwork is engaging all throughout, and arguably more importantly in a Red Sonja series, brutal when necessary. The addition of Bob Q has proven to be a step in the right direction for sure.

Ultimately, Red Sonja #8 is yet another engaging entry in a surprisingly epic story. Though heart wrenching, the themes explored are refreshing and the visuals remain really enjoyable. It might come across as weaker due to the nature of single issues, but in a collected format, this is going to be a real blast to read.

Uniquely heart wrenching, Red Sonja #8 is yet another engaging entry in a surprisingly epic, albeit long-running story of conquest and the hope for something better.

Red Sonja #8: A Contest of Hope