Red Sonja: Birth of the She-Devil #1: Little Pigs Get Fat, Hogs Get Slaughtered

Red Sonja: Birth of the She-Devil #1 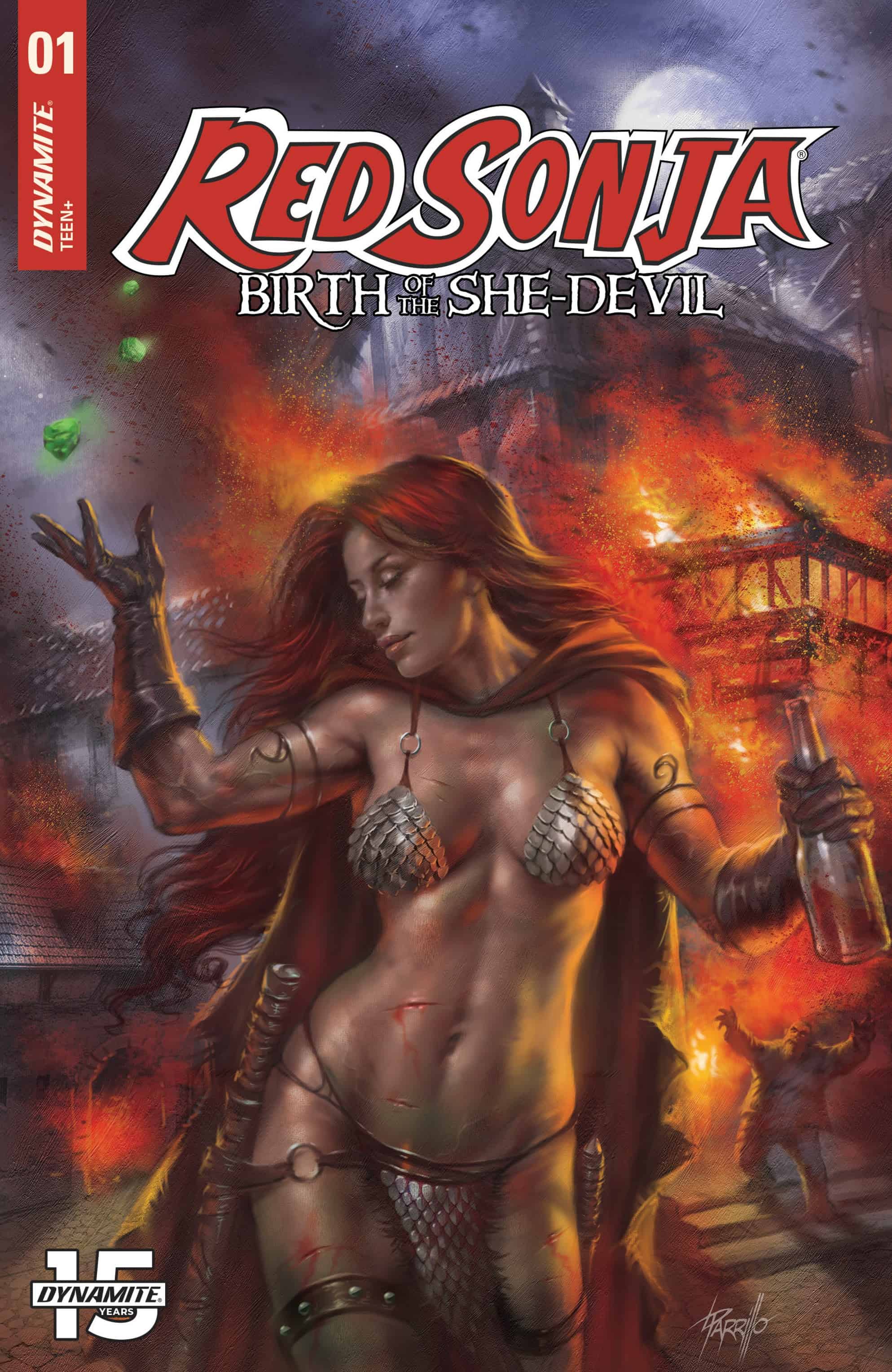 An early tale of the She-Devil! Explore the early years of the wild and untamed Sonja the Red, before she because the scourge of Hyboria - Red Sonja! Retaining her trademark armor and flame-filled hair - and temper, writer Luke Liberman (Red Sonja: Doom of the Gods) and artist Sergio Davila (Conan) deliver high adventure and horror as they introduce the demon conqueror Raka and his devil's brew, which turns men against their fellow men (and everyone in their way!). Also featuring the return of Sonja's early mentor, Ozzyus!

‘Red Sonja: Birth of the She-Devil’ kicks off with an eighteen year old Sonja – who is just as charmingly violent as ever – in search of a missing girl named Shashana. From very early on, we can see this miniseries will be exploring how she came to earn the moniker “She-Devil with sword”, as it’s already a blood raucous. 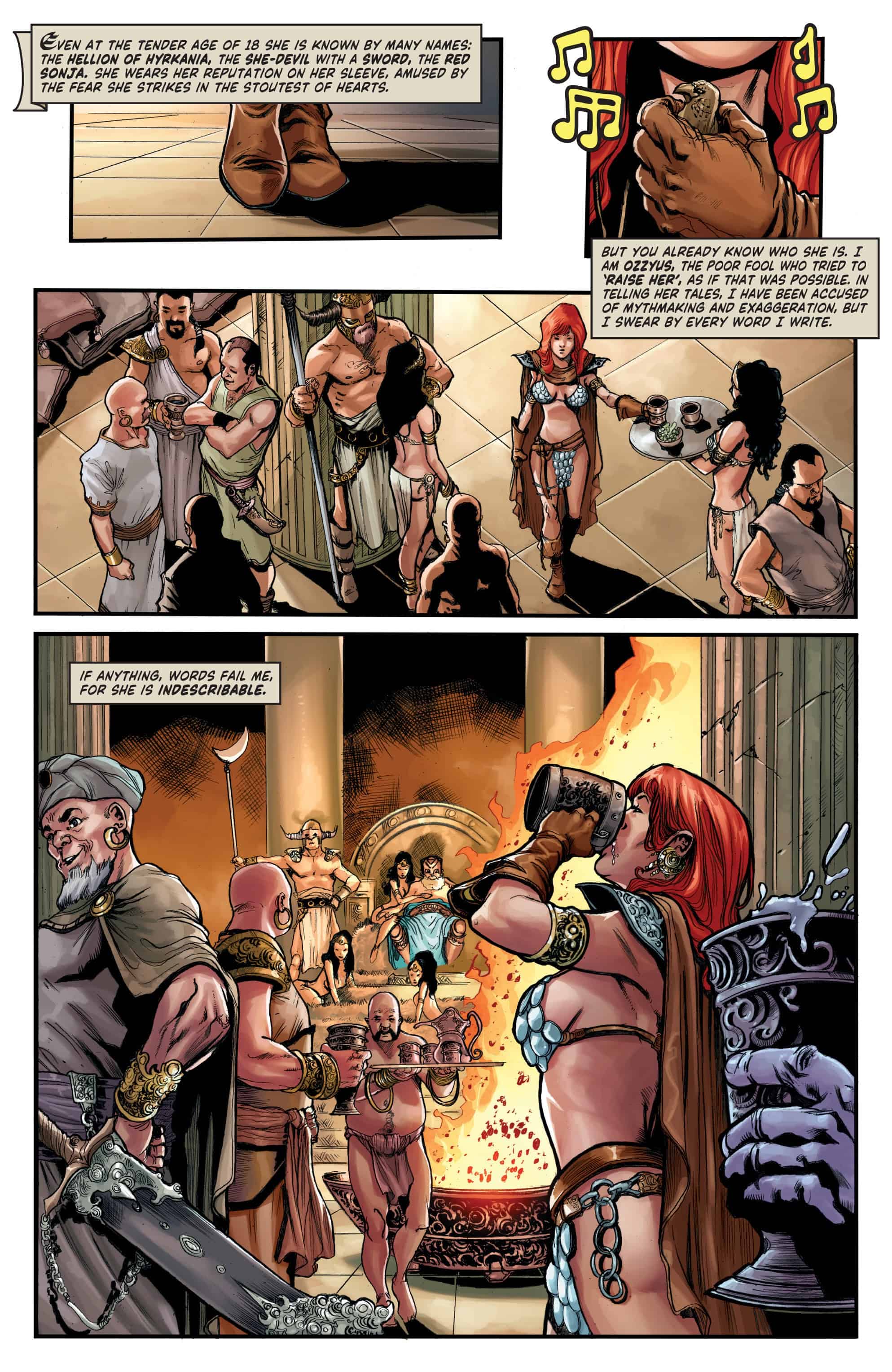 From the first few pages, we see a younger Sonja who is just coming into her own, adorned in her iconic armor bikini and eager to take the world head on. Her search for this missing girl takes her across an epic fantasy landscape and delves into her earlier years when Sonja was less patient and more willing to dive right into potentially dangerous situations. We see her just barely escape from a horde of pissed off guards and drink down a group of men before burning the whole tavern down. Her rage and penchant for mayhem seem to know no bounds in these early days. The creative team delivers a story that lends itself to these tendencies remarkably well, allowing them to showcase the many different sides and even potential vulnerability of the character.

This series is uniquely interesting when considering the narrative focus of the current ongoing Red Sonja series, as well. There, we see Sonja as a Queen, a leader of the Hyrkanian people who is thrust into a large scale conflict. In ‘Birth of the She-Devil’ the focus is much more on Sonja as an individual and how she earns her wild legacy. As a reader, I appreciate this duality from Dynamite and their willingness to explore Sonja as a character from a nonlinear perspective.

While the story is engaging, the highlight of the miniseries so far is undoubtedly the artwork from Sergio Davila with colors from Ulises Arreola. The visuals remain impress throughout the entire issue, showing a stunning Sonja against a truly epic landscape. It’s a harsh and bloody dark fantasy in its purest form, which is exactly what I want to see in a Red Sonja comic.

With gorgeous letters by the always talented Taylor Esposito, the first issue of ‘Red Sonja: Birth of the She-Devil’ proves this is a miniseries with great potential. As the demon conqueror Raka unleashes his viscous murders on a nearby village, Sonja meets up once again with her mentor Ozzyus to take down this new evil, promising a spectacular conflict ahead. It’s a badass book and I can’t wait to see what’s next!

'Red Sonja: Birth of the She-Devil #1' lives up to it's name by exploring a young Sonja hellbent on taking anyone down in her path, be it with violence or fire-whiskey! Stunning visuals and an engaging story filled with violent mayhem make this a must-read issue for new and longtime fans alike.

Red Sonja: Birth of the She-Devil #1: Little Pigs Get Fat, Hogs Get Slaughtered