Red Sonja: Black, White, and Red #3: Watch Out For The Silent Ones 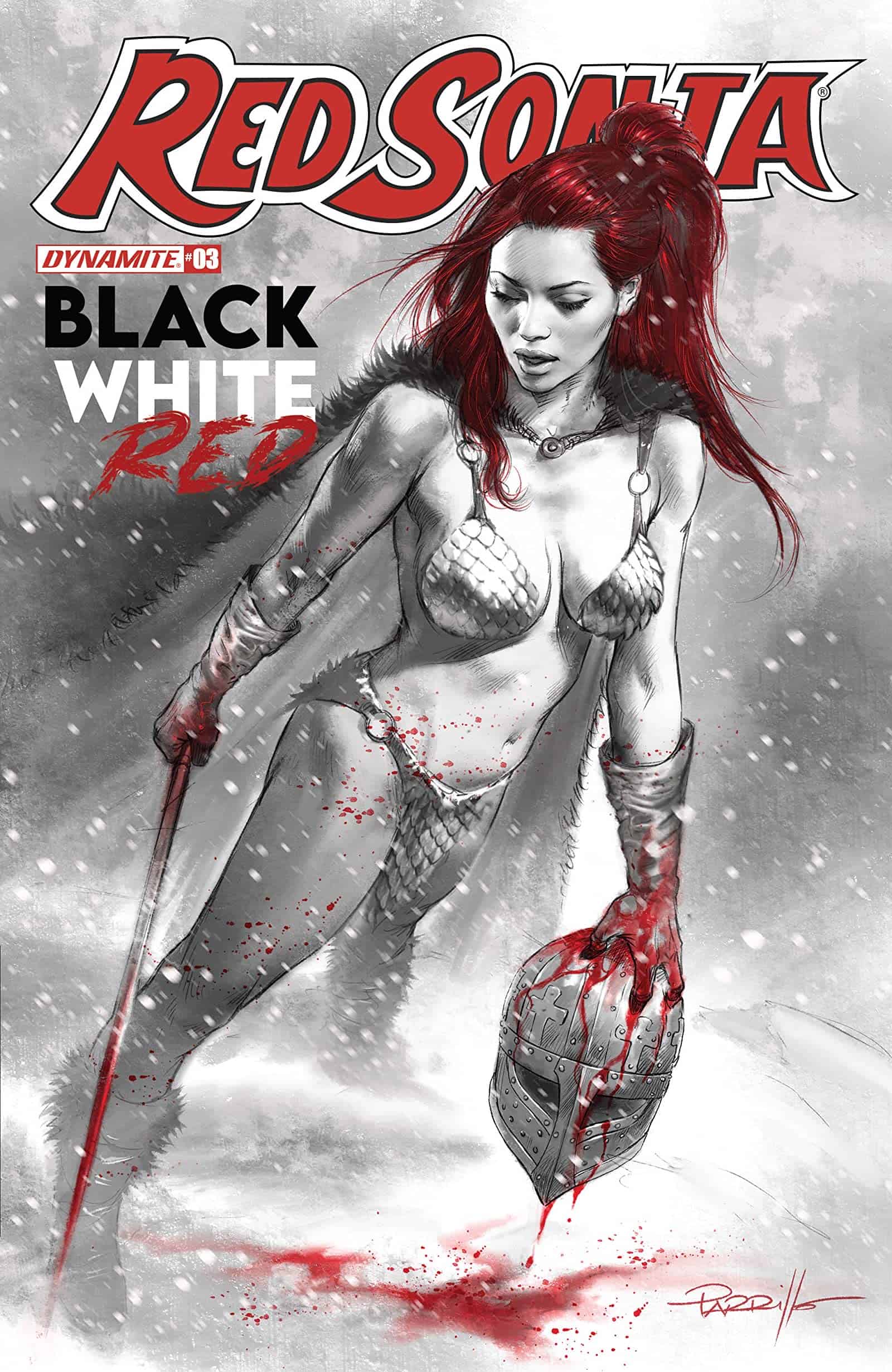 The greatest tales! The most amazing storytellers! Red Sonja, like you’ve NEVER seen before…all presented in beautiful black, white, and red!
Superstar GAIL SIMONE returns to The She-Devil With A Sword with artist WALTER GEOVANI, for a tale spanning Sonja’s entire life…
DEARBHLA KELLY and SOO LEE spin a story of interlaced intrigue and savage adventure…
HASSAN OTSMANE-ELAHOU and JONATHAN LAU feature a conundrum for Sonja, in the form of a foreboding, fire-breathing dragon…

“Dawn of a Crimson Day”

This is a masterful story without any dialogue.  The only caption is the opening panel which declares the Night she arrives. Walter Geovani’s layouts for Gail Simone’s story and his reliance on the art to tell the story is masterful.

This story as the other stories in this series uses the black and white pallet with a smattering of red mainly in Sonja’s hair and blood letting but here the coloring is done differently.  There are different shades of red used throughout.  Some whole panels are only shades of reds, including the characters and the backgrounds.  In other panels only the young Sonja is in grey scale while the the antagonist she is fighting is all red.

The detail in the drawing is also intricate.  Sonja’s hair when it grows out really flows and reader can easily see the emotion in the young girl by just looking at her face.  One sequence, The time she is burying her family shows a sorrowful Sonja followed by a serenity as she closes her eyes but when she opens them again, the reader sees the fury and fire that will become the She-Devil with a Sword.

What I find interesting is that it depicts a pregnant Sonja followed by a devastating injury where an enemy cuts out her eye forcing her to wear an eyepatch.  As expected this does not quench her fury for long as she once again jumps into battle despite having only one eye.  The ending shows a complete circle as we see Sonja’s only words in this story when she kneels at the grave of her parents with arrows in her back and she is the only form all in red with her sword on the ground beside her.

The next tale has more dialogue in it.  We meet a young girl who actually is able to set a trap that ensnares none other than the She-Devil with a sword.  The girl is ecstatic that she captured Sonja but of course Sonja cuts herself free. The rest of the story recounts the girl wanting to become a hero like Sonja.

The art is considerably different.  Sonja’s hair is drawn differently and this can be seen as a jarring change from the previous story.

The twist at the end definitely was surprising as we learn that the girl made up her story to Sonja and Sonja for her part tells her that being a hero may not be the best fit for her.

Of note the uses of red though not as dramatic as the previous story is unique.  The wolves are entirely red while the only red on Sonja is her flaming red hair.  Some of the panels, especially those used for flashback story telling uses all red inks in place of the regular black ink.

The last story goes back to the silent story telling as in the previous issue.  The uses of red mirrors the first story.  Here Sonja’s hair is red as is her cloak.  Some spotty characters throughout are colored red but the majority of red outside of Sonja is relegated to some of the backgrounds.   The lettering is minimal.  We only get a couple of dialogue bubbles but the rest is used solely for the sound effects.

I actually like the use of freckles on Sonja’s face as is shown in this story.  It gives the woman more character.

Overall this issue is a feast for the eyes.  The art between the stories is distinct but each uses the limited color pallet in distinctive and creative ways.  I love this type of comic storytelling where the reader has to rely on the art to tell the story.  Show me before you tell me.

These are great one off stories that showcases Sonja in all her iterations.

Red Sonja: Black, White, and Red #3: Watch Out For The Silent Ones