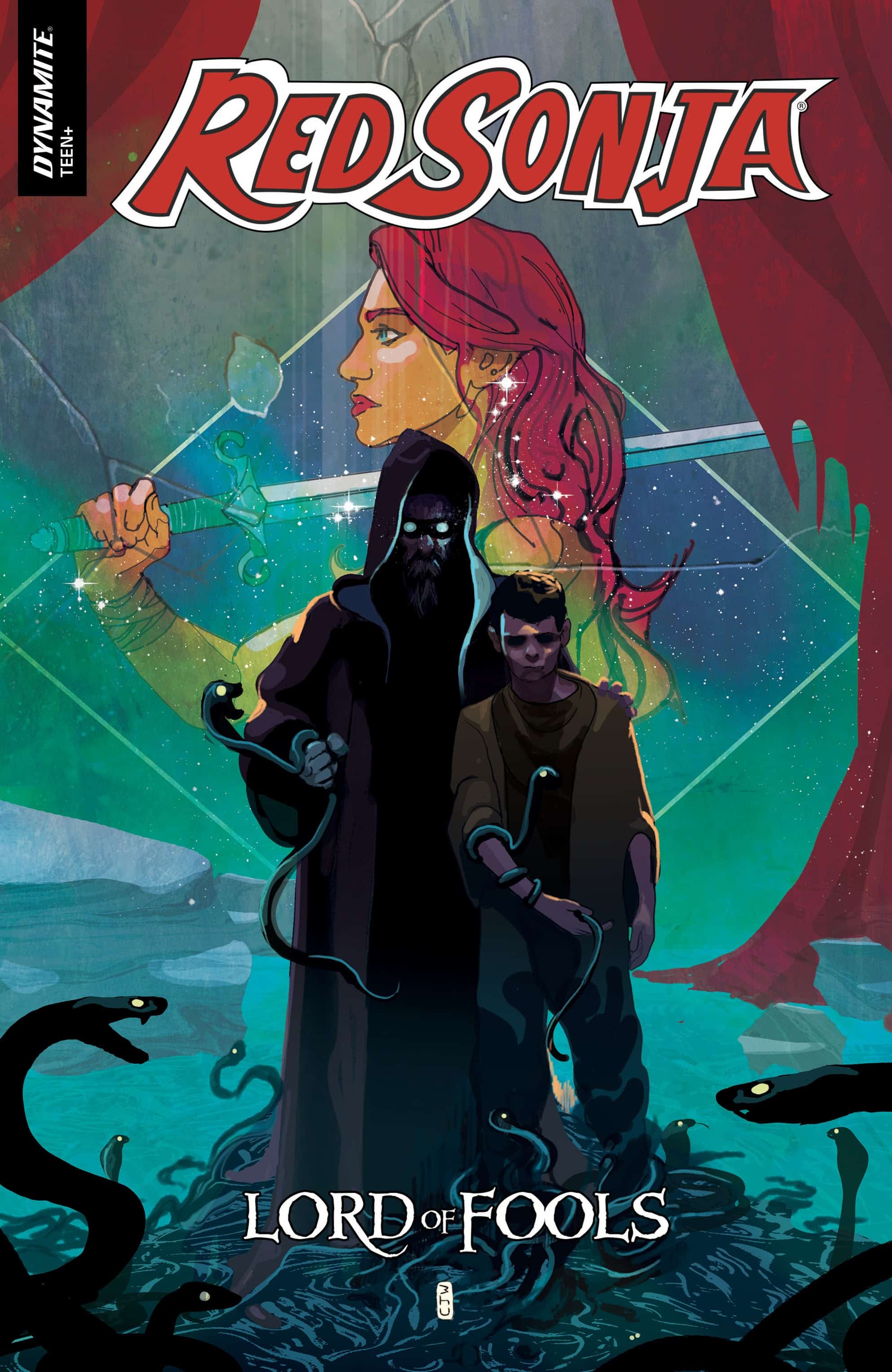 THIRTY pages of story, tying directly into the aftermath of RED SONJA #6! As the battle wages in Hyrkania...CYRIL is the Crown Prince of the Zamoran Empire, and he is young but not stupid. The mysterious blind priest will unlock the secrets of The Lord Of Fools...Cyril will learn his fate, and what it will mean for the known world...

The Lord of Fools one shot is here! This highly anticipated issue is meant to follow up on the events in the Red Sonja ongoing series – also from writer Mark Russell – which deals with the ongoing feud that Sonja the Red, Queen of Hyrkiania must deal with. Does it live up to expectations though? 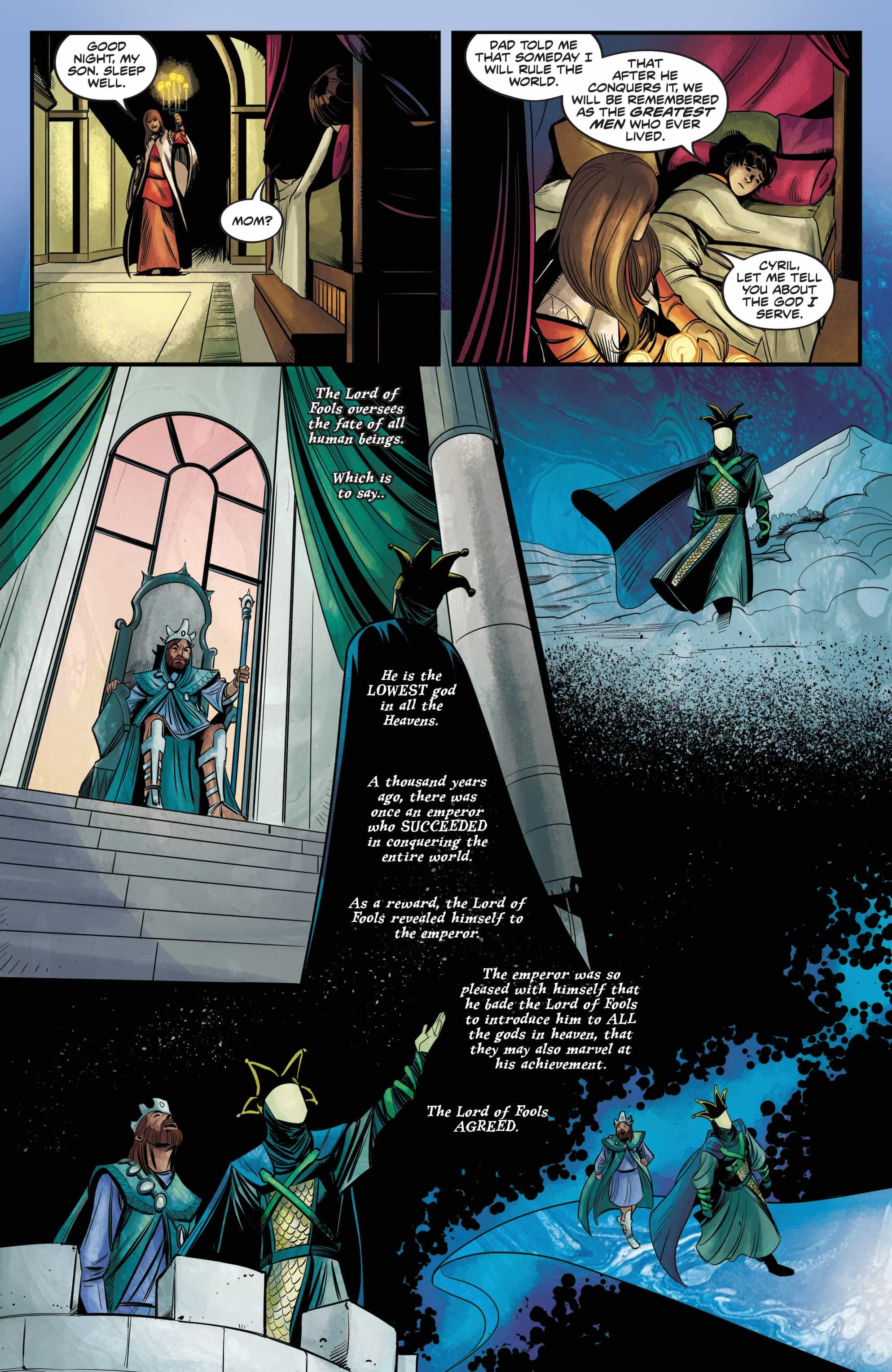 Without a doubt, the absolute best aspect of this book is the actual Lord of Fools short story that is told. This is one of two shorts that make up the overall story, but it is obvious that the one shot was centered around this mythological tale. It is invoked to help ease Cyril, the up and coming ruler of Zamora while their Emperor is in Hyrkiania dealing with Red Sonja. These characters help to provide insight into the war raging in Hyrkiania and how it impacts their standard of living back home, but it’s the story that Cyril’s mother tells him that really interests me.

The Lord of Fools tale centers around a man who conquered the entire world and expects many things handed to him because of it. Even a meeting with all of the gods in heaven, to which the Lord of Fools agrees. The story then spirals into a psychological trip complete with whimsical, yet fantastic artwork that truly sets this book apart from the rest. The man who conquered the world soon learns that he is no more important than the rest of the ants who have done the same, and claws his own eyes out. Cyril’s mother ends with a lesson, that ambition is but an errand from the Lord of Fools himself, putting the entire arc thus far in the Red Sonja ongoing series into brilliant perspective.

Because of this unique message about the events in the previous six issue of Red Sonja, this one shot doesn’t necessarily function as expected. Its most important successes stem from how it ties into a much larger story, and it will take a fundamental appreciation for an expansive narrative to understand why this issue works so well. There is almost no appearance from Sonja the Red herself (aside from at the very end), which is disappointing, but doubly so if you wanted this to be an individual one shot for casual reading. Mark Russell is proving that he has a grand story in mind, and while the chess pieces are being moved around the board in interesting ways, we are quickly approaching the time when drastic steps must happen. 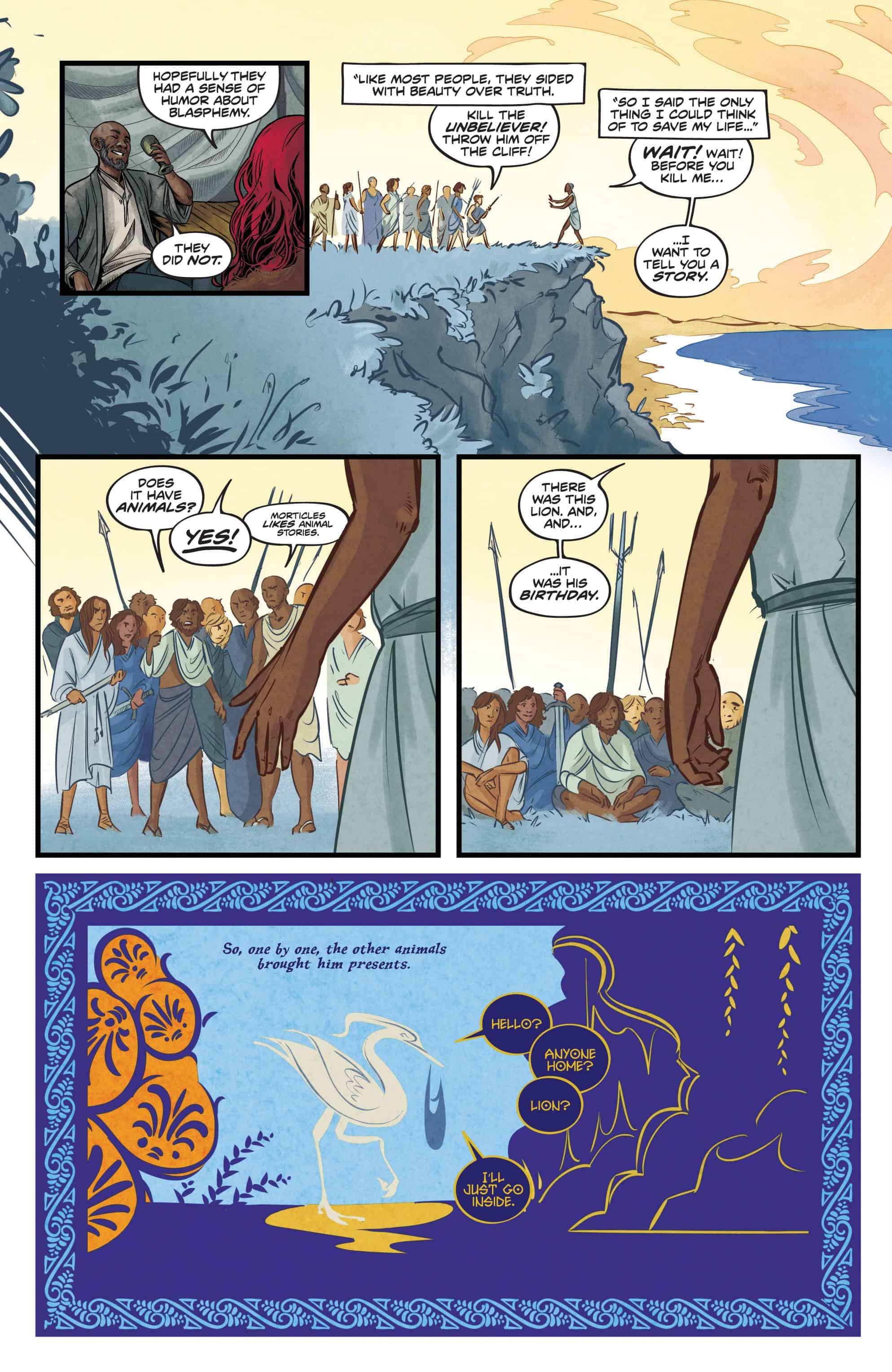 The second half of the book is focused on a separate story titled ‘Bread and Cerkuses’, and while it isn’t as impactful both artistically and thematically, it does set the stage for the upcoming Red Sonja #7. The story is obviously meant to provide insight into Red Sonja’s struggles the way the Lord of Fools did for those in Zamora, but it just lacks the tact of the first short. Even so, it’s an interesting tale that certainly builds anticipation for what’s to come!

Overall, the Red Sonja: Lord of Fools one shot is a definite step in the right direction for the series, despite choosing to barely include Red Sonja herself. I thought this was going to be a critical error when I began reading, but somehow, the creative team pulls off a story that stays true to the Red Sonja mythos and more importantly feels worthwhile, especially if you are willing to dig just a bit deeper into the story.

This is one that fans will not want to miss!

What we find in the 'Red Sonja: Lord of Fools' one shot is an insightful look into past events and future revelations through the lens of mythology. Despite featuring little of the titular character, this book pulls the narrative pieces together for a truly engaging experience packed with beautiful visuals.