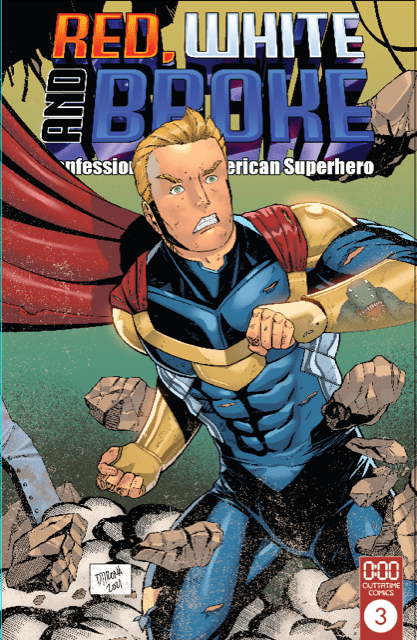 Captain Stronghold’s life is unraveling at the speed of light, but he still needs to save the world. The world’s safety rest in his ability to keep it all together. Will the world perish or, with Captain Stronghold, save the day?

Comics are a great form of escapism. They can take us to far-off lands, they can show us how to be upstanding citizens, and they can make us laugh out loud, and that is precisely what Red, White & Borke does from page to page.

Mike Spring has penned a comedic gem of a story that melds the sharp wit of Fletch and hijinks of Jon Ringer (bonus points if you get the reference). The story opens up with Captain Stronghold on the local morning talk show coming to terms with his financial despair. As he continues to pour his soul out on cable tv, hilarity and fear take turns in rearing their ugly head. As the story unfolds, we come to know the soul of Captain Stronghold. His vulnerabilities in trying to balance being a superhero and not forgetting what it feels like to not only be human but to feel comfortable with who you are.

There’s a reason that both issues were highly successful on Kickstarter, surpassing their goals with the ease of leaping the tallest building. Now, I know you’re probably thinking, “another comedy comic….” YES! We put superheroes on pedestals. We protect them. We claim a stake in ownership over their lore. But we fail to realize what happens when they’re not saving the world from chaos and destruction? This is where the pen of Mike Spring comes in and pulls back the curtain to reveal the other side of what happens when a superhero goes broke. I love the realness of how he brings forth very human feelings with Captain Stronghold, which allows us to see Robert Rhodes’ vulnerability. How many times have we heard, “it could happen to you.”

Don’t sleep on Red, White & Broke. It’s fun, simple, and well put together. It has an outstanding balance of solid storytelling with a great pace that keeps you interested from cover to cover. I can’t wait to see what issues 3 & 4 bring. Head on over to Kickstarter and back issues 3 & 4! You won't' be sorry.