The Eyes Upon You. (Redneck #7 Comic Review) 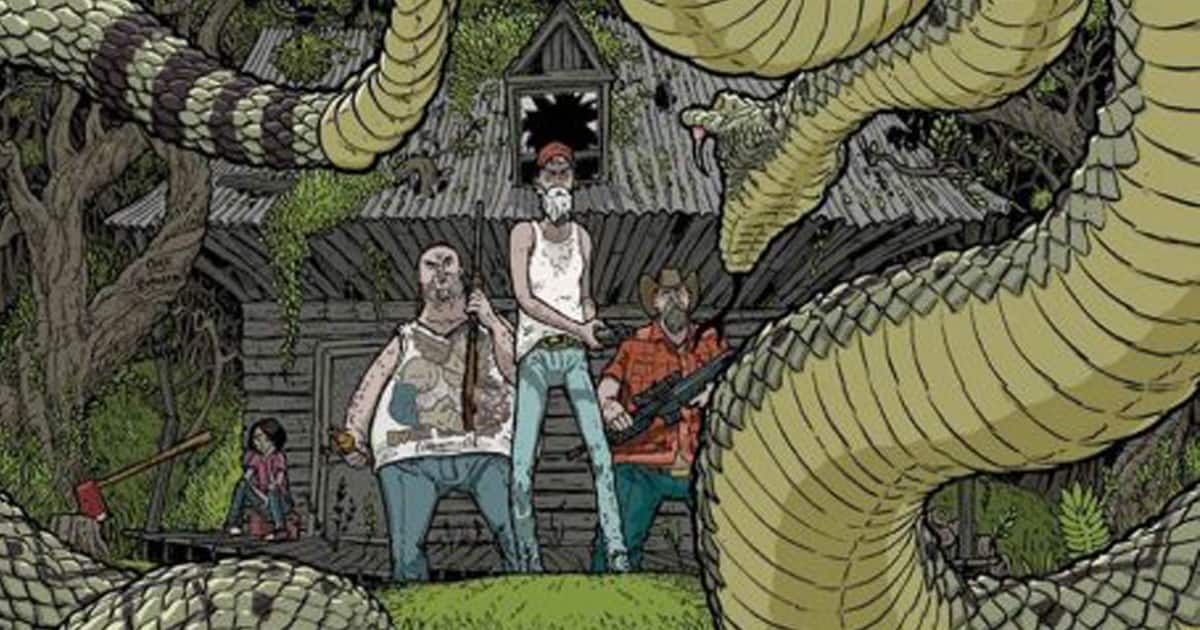 The Bowman Clan set up shop in Waco, TX, attempting to remain undiscovered, with a new member of the family , former Pastor Landry, in tow!  One must keep in mind there are rules to being a vampire, and when the rules are broken, the consequences are severe and the suffering is guaranteed! 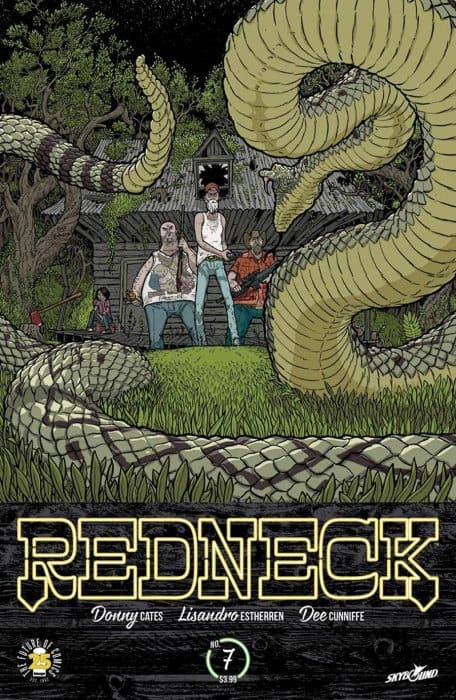 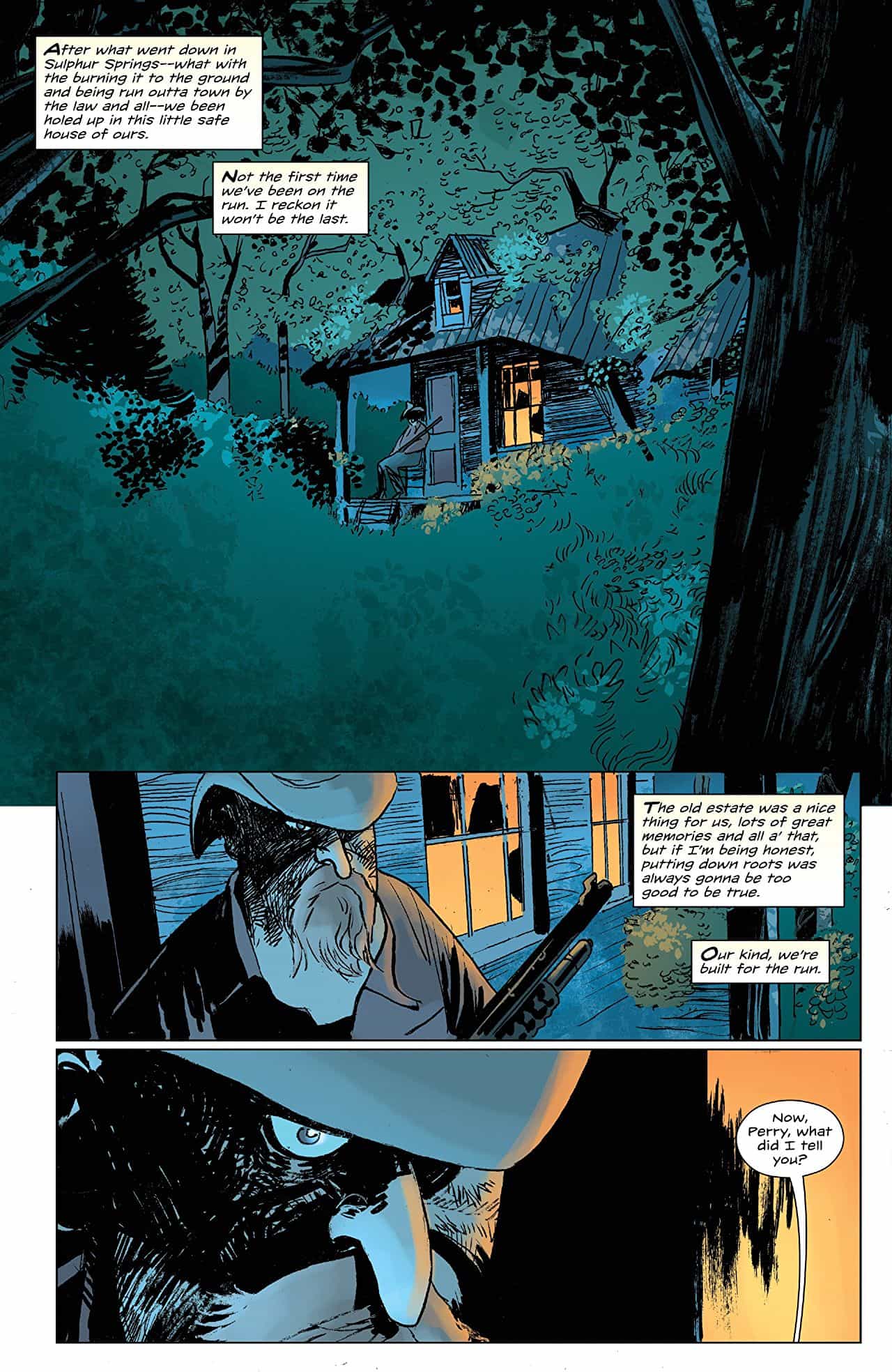 What You Need to Know:
Redneck, the story of a family of vampires, the Bowman Clan, who had given up drinking human blood and once raised cattle on a small quiet farm in Texas to procure blood without feeding on humans and stay off the radar of all those who have decimated their kind over the centuries.  After a series of unexpected tragedies, JV, head of the Bowman clan,  his youngest son Slap murdered, their quiet little hometown, their business, and their farm burnt to the ground after Grandpa Bowman’s treacherous ways caused their world to be turned upside down, erupting into chaos, violence, and murder!  With Grandpa supposedly dead, the Bowman clan is now on the run, again, this time from local law enforcement, with the newly turned vampire, Pastor Landry in tow, once one of the family’s longest standing rivals who until recent events was hunting them himself! 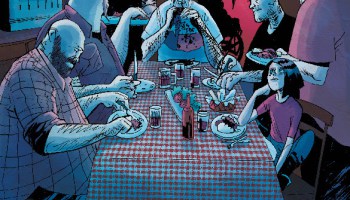 What You’ll Find Out:
This issue picks up eight months after the Bowman Clan fled their ancestral home, finding the Bowman’s having taken up refuge in Waco, TX hiding in one of David Koresh’s Branch Davidians’ secret bunkers for some time, and then a small cabin hidden away in the deep woods.  They are wanted by the police, and they don’t know what to do next, but lie low and wait for things to settle down.  After the loss of JV’s youngest son, the family business, JV’s Barbecue, the farm, and the slaughterhouse they once owned, their food supply, the ease, and the availability of blood is now gone and they are forced to rely on Phil and Evil, their trusted human familiars to keep them nourished by hunting and bleeding wild boars. 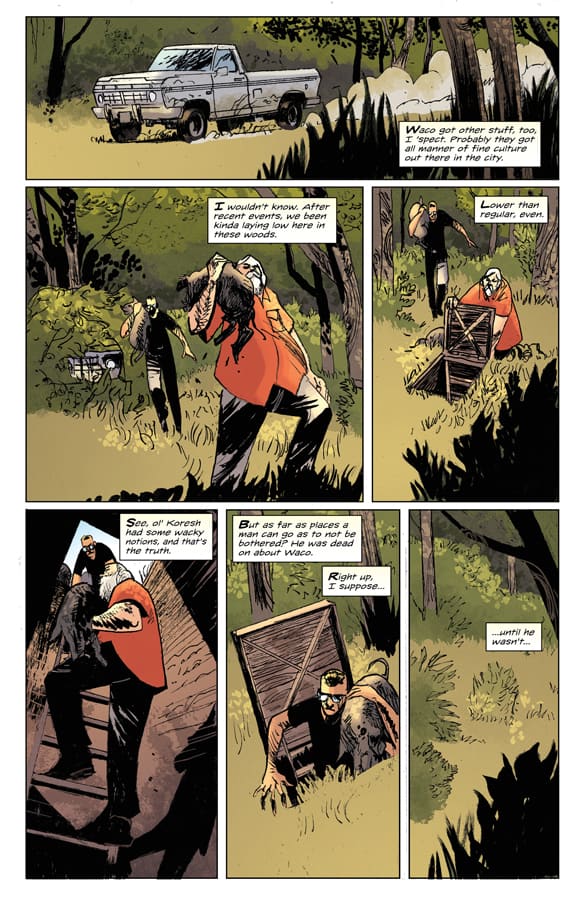 This takes place while JV plots the families next move.  It’s obvious that JV has lived many years, as he has a patience the younger Bowmans lack.  With very few words, Cates and Estherren get this point across, the lines the coloring , all carrying a somber tone, and outside of a game of poker where the sweet little Perry uses her mind reading abilities to win a hand of  cards, and seeing Greg and Sheamus complain about the waiting, their eagerness to feed, and wanting to make their next move; the issue focuses primarily on Uncle Bartlett and his relationship with the family and Landry.  Bartlett not only keeps the ‘young’ Bowmans in check, but shoulders the responsibility of educating the once hated Pastor, now vampire Landry, by taking him under his wing, and while they go out at night to make sure no one has been creeping around, Bartlett treats Landry almost as an adopted younger brother and they cover the rules of being a vampire, and what happens when these rules are broken, primairly that rules are rules for a reason, and regardless of where they come from, when they are broken, the consequences are normally dire! 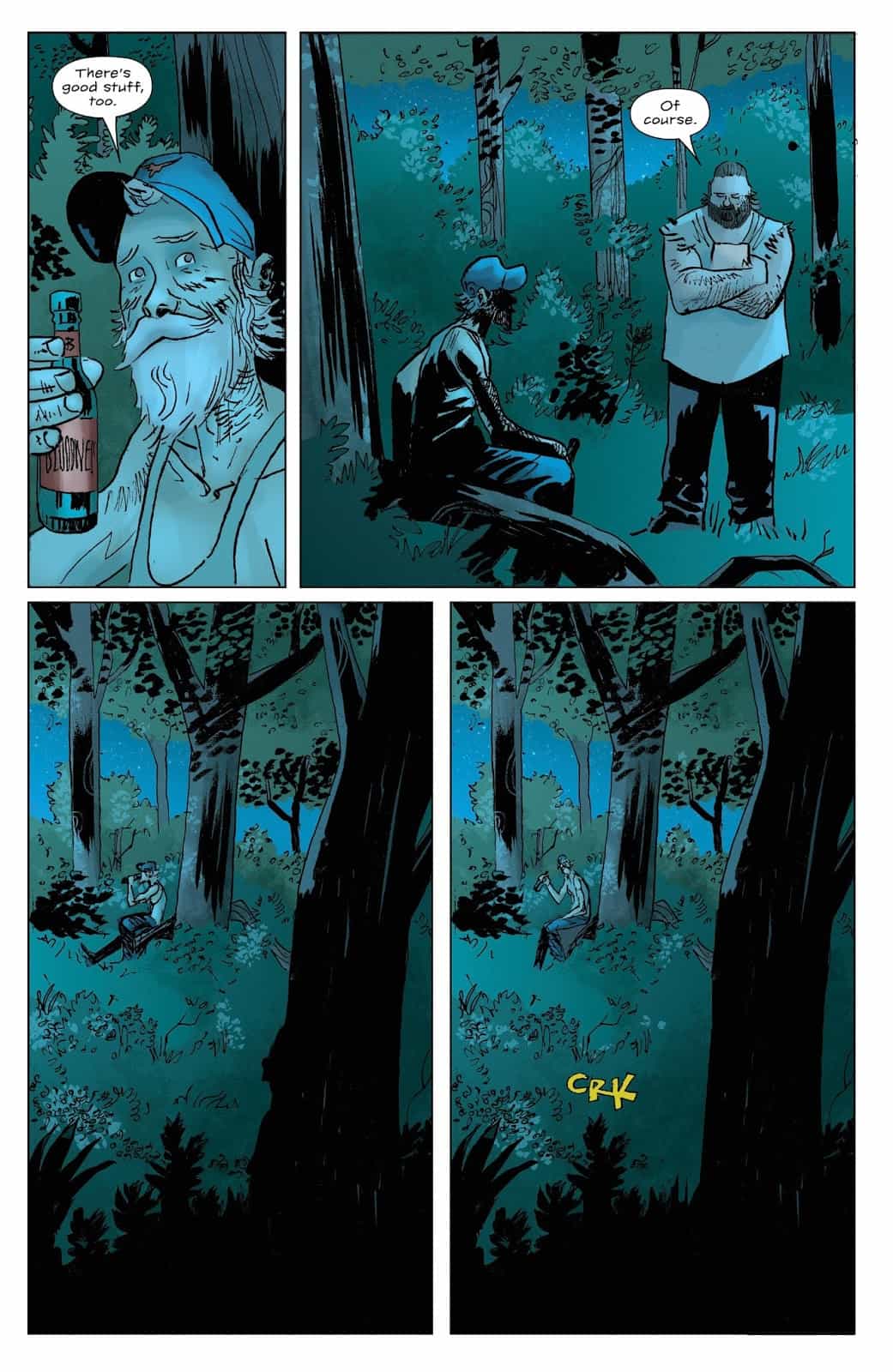 Bartlett explains to Landry that while human, he could not explain why humans act and behave the way they do, using this metaphor as a justification for not having all the answers on his vampire ‘rulebook’ as he teaches him the ins and outs of being a vampire, because he doesn’t have answers for why or where every rule he covers exists or originates from, but his primary emphasis with Landry is that these rules exist and are there for a reason!  Cates uses this moment in the story to run through the various vampire traditions we’ve come to know over the years, using Bartlett to expand on the lore, what type of vampires they are, and what items may affect them.  The big ones dealing with the death of a vampire, beheading, stake through the heart, and sunlight!  Bartlett touches on the vampires disdain of crosses, while they can burn, they would not kill.  He also discusses the truth behind the rumors that a vampire must be invited into a residence before entering, also touching on rumors regarding vampires abilities to change shape, turn into mists, read minds, explaining that many vampires can manifest any number of abilities, unsure of how or where these abilities come from!  Cates endears the reader to humanize these monsters, a scene where Bartlett pulls a stashed bottle of blood and shares it with Landry, whose appetite seems quite large, but Bartlett doesn’t take much notice except to take this moment to tell him that a vampire must never drink human until death, because this brings them back.  Bartlett also touches on the taste of human blood and the bloodlust, the thirst that arises after tasting humans. 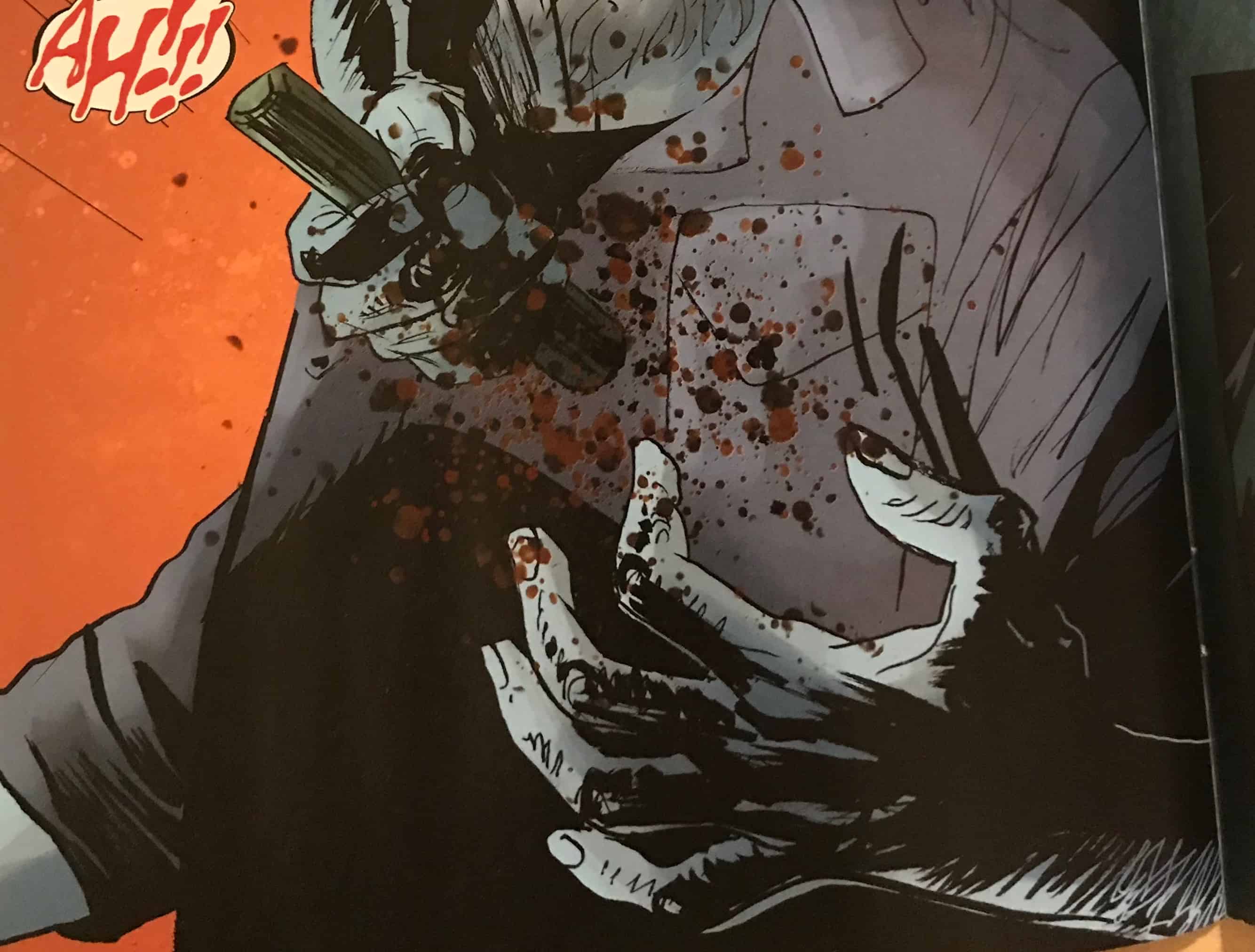 After some satisfying interactions between Bartlett and Landry, Landry excuses himself, and after some time, Bartlett returns back to the hideout to find that JV is wondering why he is alone as Landry hasn’t returned, all of this shocking Bartlett.  JV orders Bartlett inside as the sun will be up before long, and he goes in search of Landry.  JV stumbles upon a young vampire boys washing his hands in a stream, and then gets the shock of his [undead] life!  Without giving away the entire ending, a story that may have started with a slow burn, Cates crafts a surprising finale that ends with an explosive bang leading into the next story arc of Redneck and a few more vampires are about to join the fray! 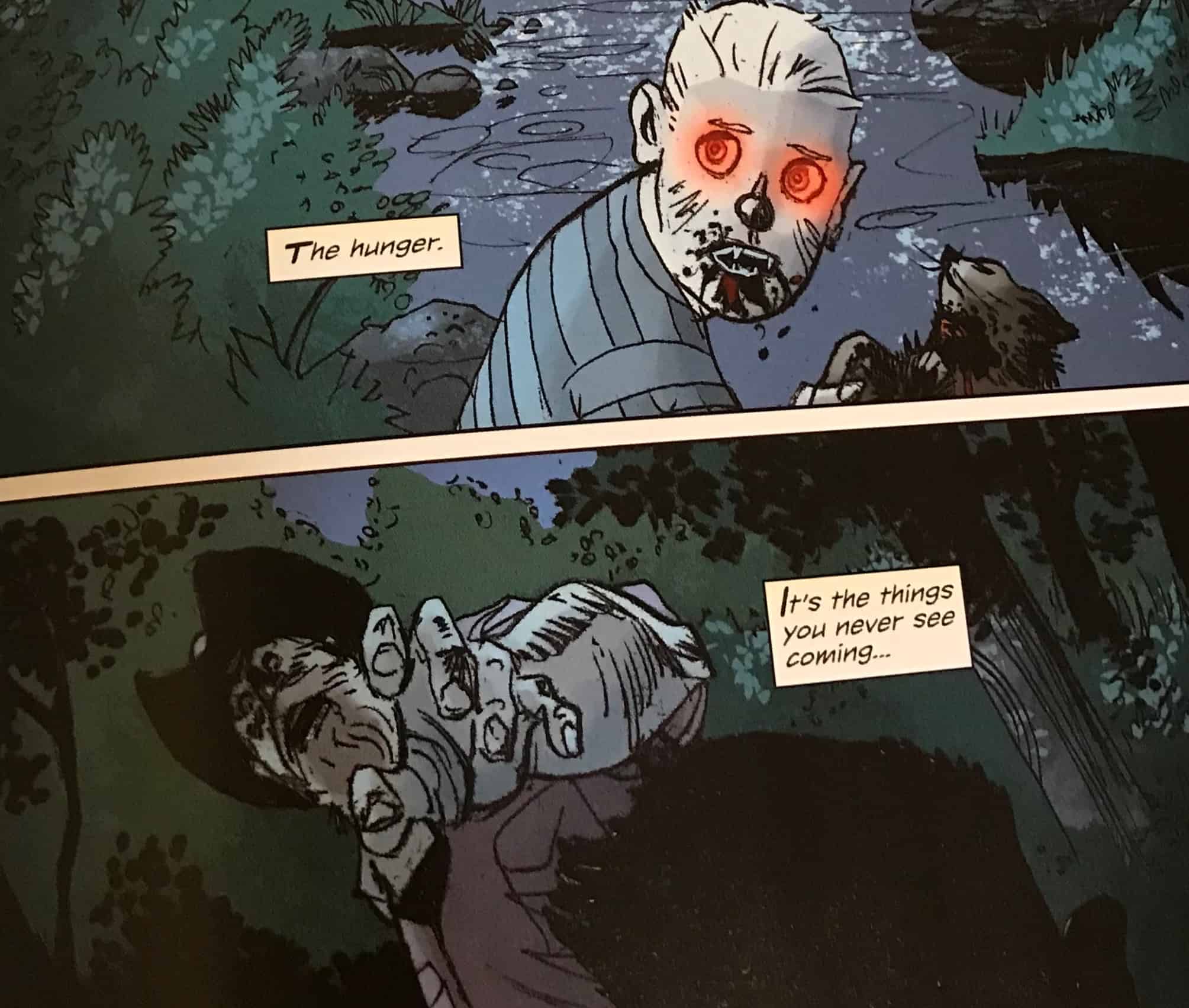 What Just Happened
This new story arc for Redneck kicked off slow but introduced the vampire lore and rules that come into play in this issue’s finale and I’m sure plenty of big moments to follow!  We end with the well-traveled Uncle Bartlett, the three youngest Bowman Clan members, Greg, Sheamus, Perry, and two familiars hiding in the wilderness of Waco, TX, while JV searches for Landry, only to discover that Landry had given into the thirst and sired at least a dozen or so new vampires, and we know from previous issues that a newly sired vampire can be strong, and thirsty!  Exactly how Landry pulled this off under the watchful eyes of JV is a big question, but over an eight-month time period, there is really no telling how many vampires Landry or his spawn may have sired.  Landry not familiar with the rules, not knowing much about being a vampire, it’s conceivable they could have spread like cancer!  This issue leaves a lot of unanswered questions which leaves me thirsting for Redneck  #8!

Rating:  8/10
Final Thought:  Donny Cates delivers again with a story that humanizes the monster, allowing the reader to feel for the character, his writing is nothing short of astounding.  This issue was slower than most, but Cates used it to provide some very informative rules that these vampires we have come to love, must live by, and unfortunately, in some cases, will invariably die by.

Again, the Redneck creative team, Estherren’s illustrations are spot on for this title, and you see the range specified in this issue, for instance, the new design for Pastor Landry is much more dressed down, making him seem more a part of the family than his contrast character design in previous issues where he  seemed bigger, making him seem looming and dangerous to the Bowman clan, his portrayal here made him seem smaller, as he looked to learn as much as possible regarding his new life from my favorite bloodsucker, Uncle Bartlett.  The environmental scenes are exceptionally well done, and really do an incredible job of creating this isolate TX forest setting in which the story takes place. Even the panel layouts are well done, establishing a build to the big moments that catch the reader’s eye, also providing good scene transition from page to page, in my opinion.

Bringing it all together is Dee Cuniffe’s colors work, creating a somber dark tone throughout the book but when the action hits or the hunger strikes, the eyes of the vampires are so elaborately done calling out the impending danger to the reader!  Thus far, the creative team has been consistent and done an incredible job with all aspects of this book, and although the story may have a slow start, the ending was more than I bargained for, doing what Cates does best, leaving me craving more from my newfound Bowman family!