Doreen Green has the powers of both squirrel and girl, she and her story are unbeatable. If you’re not reading The Unbeatable Squirrel Girl, you’re nuts! 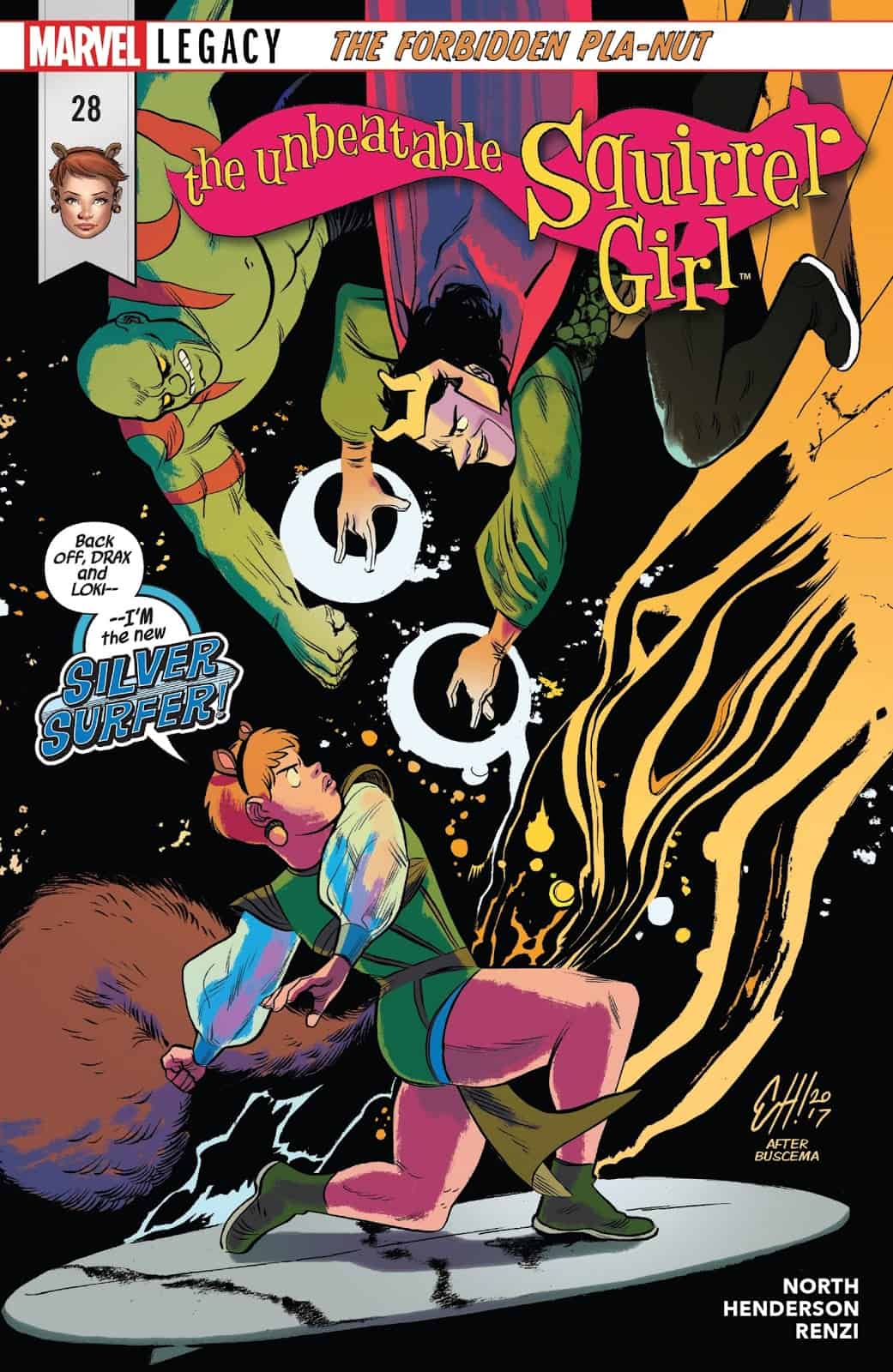 What You Need To Know:
Doreen’s best friends Nancy Whitehead and Tippy-Toe the squirrel have been abducted by a race of green squirrels called the Chrrt-chuk to help save them from Galactus.  Meanwhile on Earth Squirrel Girl’s frantic search brought her to the Sanctum Santorum and face to face with the new Sorcerer Supreme, Loki.  Loki casts a spell to learn Nancy and Tippy’s location and prepares to teleport our hero when they’re interrupted by none other than the Dread Dormammu. 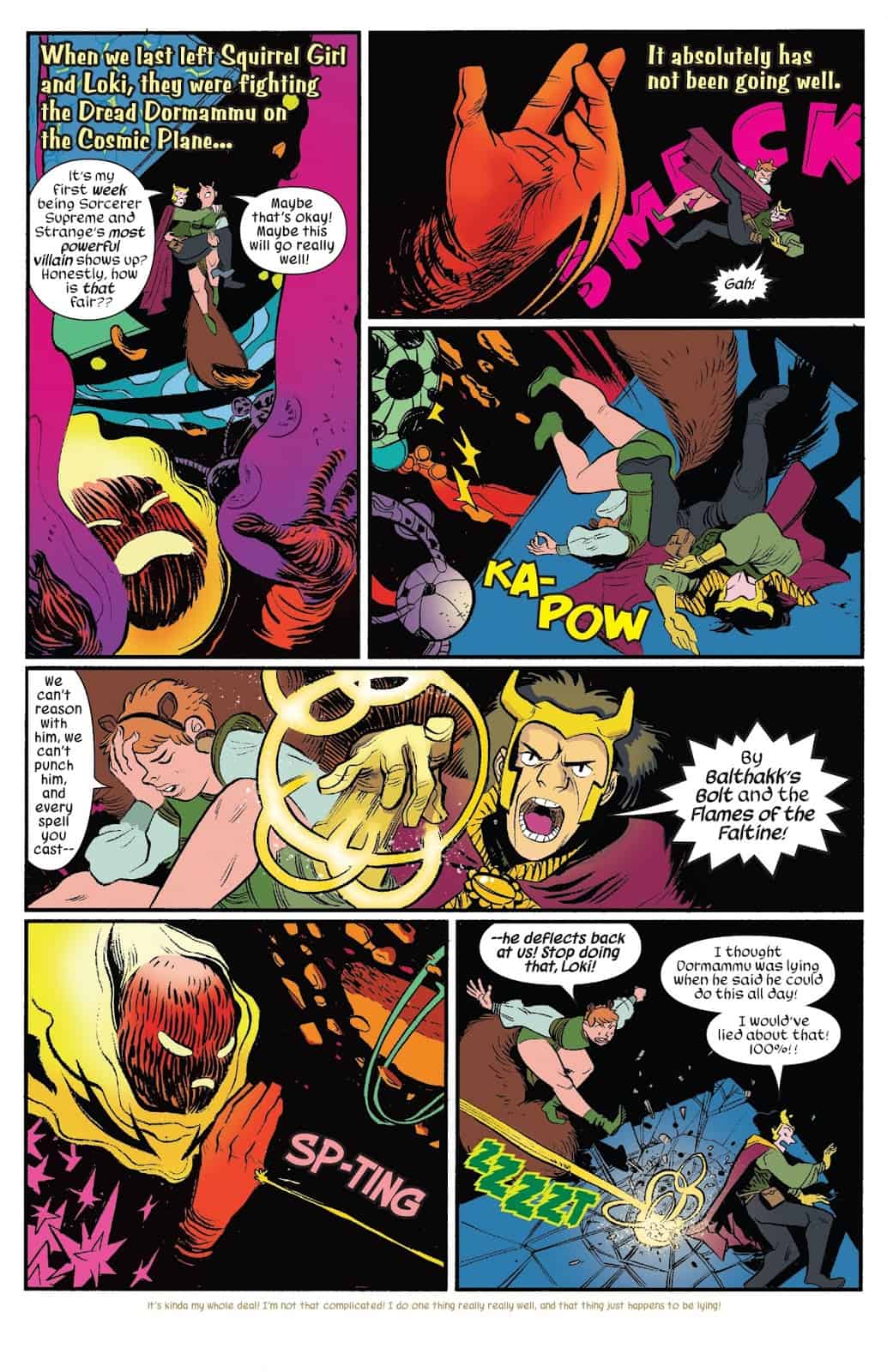 What You’ll Find Out:
The Forbidden Pla-Nut part 2 opens on the Cosmic Plane where Squirrel Girl and Loki are locked in mortal combat with Dormammu.  All seems hopeless as every spell Loki casts are directed back at them.  Until the big bad let’s slip the fact that he’s been feeding off of the spirits that inhabit his realm.  Always thinking outside of the box, S.G. asks the ghosts of those who died in the Great Squirrel Migration for assistance.  In answer, a horde of squirrel phantasms chases the Dread Dormammu away.  Victory now in hand, S.G. immediately returns to the main concern of her missing friends.

With Dormammu in retreat, Loki decides he can take the afternoon off and declares that he’d also be traveling to Chitt-crrt.  Of course, Loki lies about being able to teleport himself (because he likes road trips) so he summons a spaceship, the spaceship of Drax The Destroyer.  S.G. quickly earns Drax’s respect so he agrees to ferry them across the galaxy.  Meanwhile on Chitt-crrt Nancy attempts to diffuse the bomb left behind by the Silver Surfer when suddenly Drax’s ship appears and crashlands directly on top of it.  Warm reunions abound!  The group discovers that the bomb is a dud leading Nancy to deduce the “Silver Surfer” and his entourage are simply scammers.  Game recognize game, respect to the space grifters.  The group comes up with a nifty plan to foil the grifters that are way too good for me to spoil when who should appear?  The Silver Surfer himself! 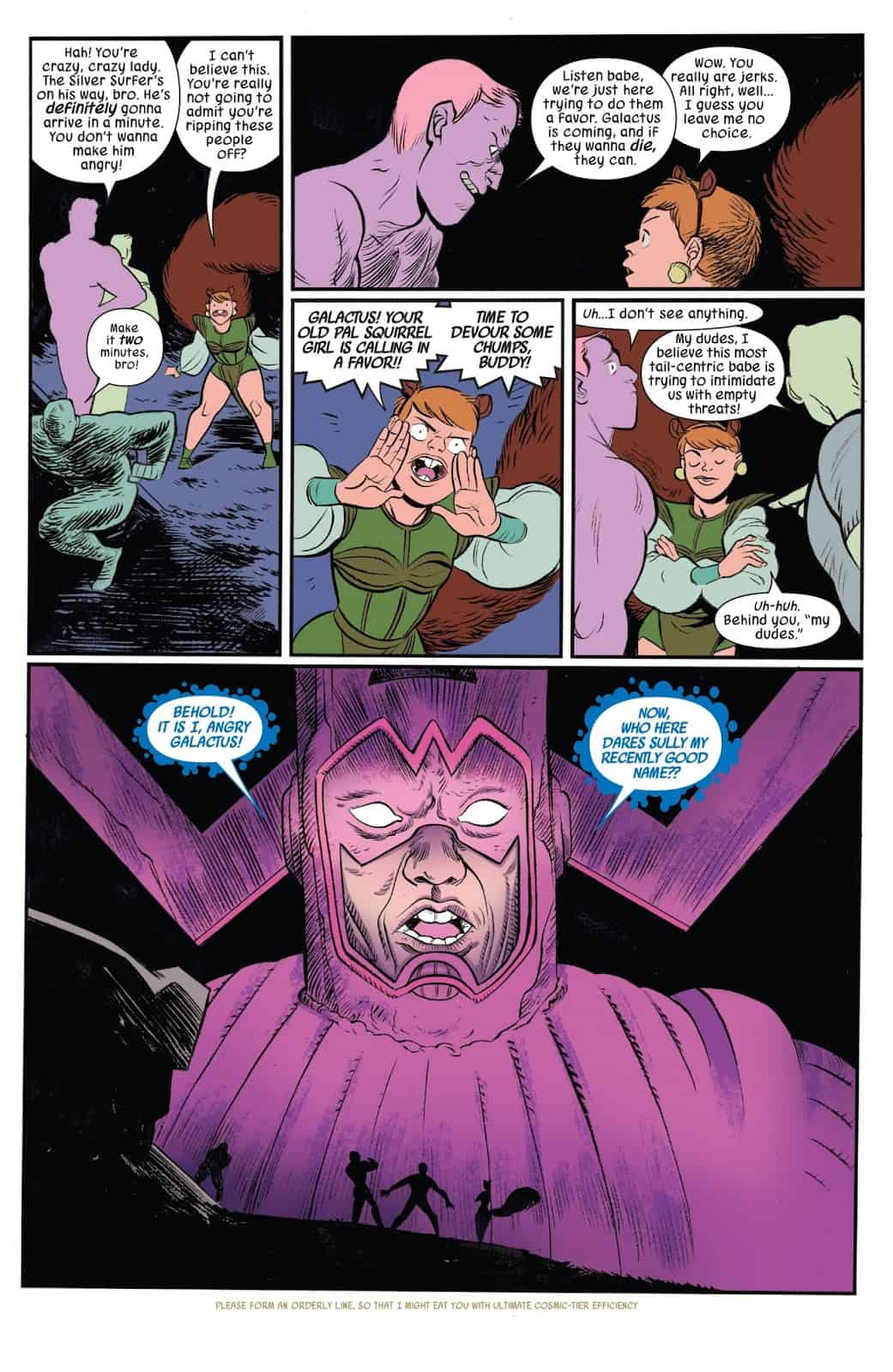 What Just Happened:
The second issue of this arc is even better than the first.  For a book that is well known for its humor, this one rises above most that came before.  Mr. North writes Loki so well that I truly wish he would become a permanent member of Doreen’s party.  In his last appearance, we were treated to Cat-Thor Loki, which as you can imagine was awesome, in this issue we get Squirrel-Head Loki.  And yes, it’s just as awesome.  In my opinion, this is second only to the Kra-Van, which may not factor into this story but come on, the Kra-Van!  Coming in at a close third is Space Abraham Lincoln, keep your eyes peeled folks because this one may factor into the story.  Drax is another great addition and the chemistry he brings is pure magic.  I love how earnest he is, ” When will I learn not to trust the god of lies?”, seems pretty obvious dude.  The last few pages go by at breakneck speed leading up to a really tight cliffhanger.  I can’t wait to see what happens next.

I’m going to say it again, if you’re not reading The Unbeatable Squirrel Girl, you’re nuts.  Go back and pick up number 27 so you can catch up on The Forbidden Pla-Nut and treat yourself to some laughs.  Also, Erica Henderson’s Galactus is fantastic!