X and team arrive in Scotland to take on Proteus’ reality warped rustic town in an issue that evokes the plot of Giant Size X-Men #1.  None of the X-Men trust newly formed X as he could still be a plant created by Shadow King or Proteus.

What You Need to Know:
The X gang including newly corporeal “X” is in hot pursuit of Proteus after getting their collective x’s handed to them in the middle of London.  Proteus has warped the fabric of reality of a small Scottish town and the X-Men are now en route to rescue the town and to end the threat of Proteus. 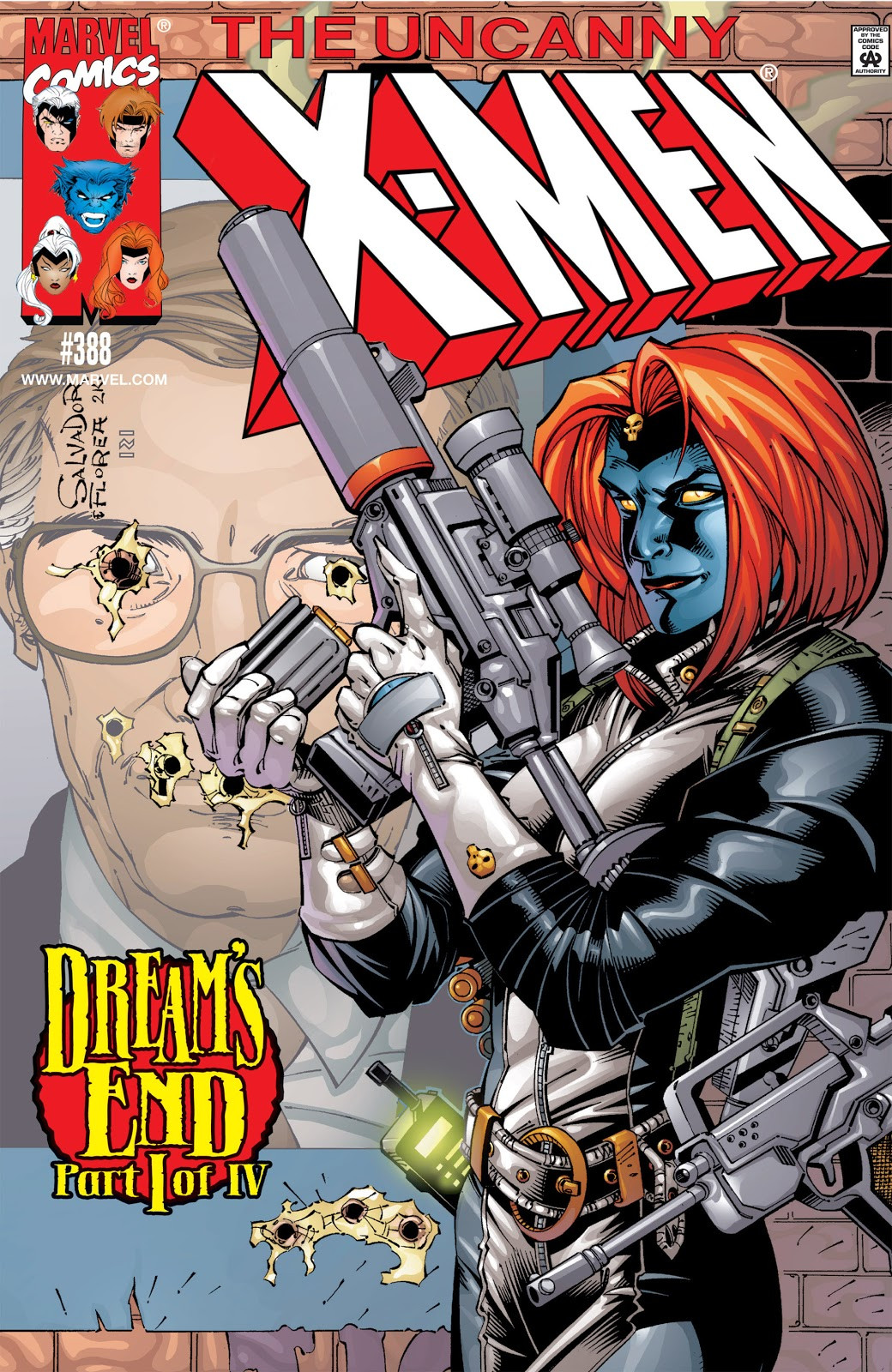 Proteus’ mother Moira Mactaggart dies while trying to cure the previously mutant-specific genetic disease called the Legacy Virus.  Mystique having altered the disease to now also affect humans the disease’s scope of influence and threat has increased drastically.  It should be noted that the X-Men involved in the Dream’s end storyline included Mystique, Professor X, Rogue, Bishop, Gambit, Archangel, Psylocke, and Wolverine prime.  In this previous X-Men storyline, Rogue has also lost control of her psyche and the various personalities she’s absorbed through the years are taking over control which has a direct parallel to Proteus’ and Archangel’s situation in our current storyline.  Anyways, in conclusion, Xavier’s dream of a peaceful coexistence between mutant and human is thwarted by Mystique’s eventual assassination of Senator Kelly who as it turns out had planned to turncoat and stand in favor of equality.  Moira also is now dead from a horrible disease because of Mystique’s actions and Moira is Proteus’ mom which hasn’t yet been mentioned in our current title, but I assume that’s why she’s on the team.

Ye Olde Players:
X: Is he a younger Professor X inhabiting Fantomex’s body or a ploy by the Shadow King or a foil construct of Proteus?  We still don’t find out.
Bishop: The future is now! Green Hole sun won’t ye come; won’t ye come?
Mystique: I can’t believe I’m still on a team, but I’m here for Dream’s End relevance.
Gambit: I’m just here still because Rogue is here.  Also, Dragons have red eyes like me!
Archangel: In need of mental help other than Gestalt Therapy vis-a-vis his gestalt persona of pacifist and Apocalypse seed.
Old Man Logan: Nobody would buy this without at least one Wolverine.
Psylocke: I’m the leader now!
Rogue: I am so done with Xavier brain nonsense ya’ll.

Just so we are all on the same psychic/literal symbolism Scotland page, a fetter is a ball & chain that weighs you down.  So, we are set in the town of the figurative “fettered” baggage of Proteus who feels he had been abused by his alcoholic father and then wrongfully imprisoned by his mother, murdered by the X-Men, and then imprisoned by the Shadow King for decades or a mental eternity.

He claims to have given everyone in town the power to warp reality to their whims in an effort to prove to the X-Men do-gooders that humanity is just awful.  However, as shown in the image with our green bean Proteus declaring perfection the facets of reality shown to us depict aspects that reflect pieces of Proteus’ psyche rather than actualizations of the actual townsfolk.  His gift of reality warping to the townsfolk only applies insofar as their desires reflect the way Proteus wanted to alter reality in the first place.  his assertion that all of humanity is terrible is flawed by his own introspective focus on permitting only reality alterations that comport to his twisted worldview.

The X-Men, of course, won’t let this stand.  The blackbird gets taken down by a combination of arrows and dragons splitting the team up similarly the way done by the island of Krakoa which also turned out to be a living monstrous mutant nightmare.  They take aim at what seems to be a rehash of Giant-Size X-Men #1 as the team is forced to split up to fight various Proteus created monsters including dragons and demonic beings.  Not to be outdone, Proteus has made Fetter’s Hill (pronounced here in Scottish Brogue) into a veritable Fighter’s Hell!  for our heroes as they battle various irrelevant baddies that Proteus has set up for them in a manner reminiscent to the behavior of Krakoa once again. 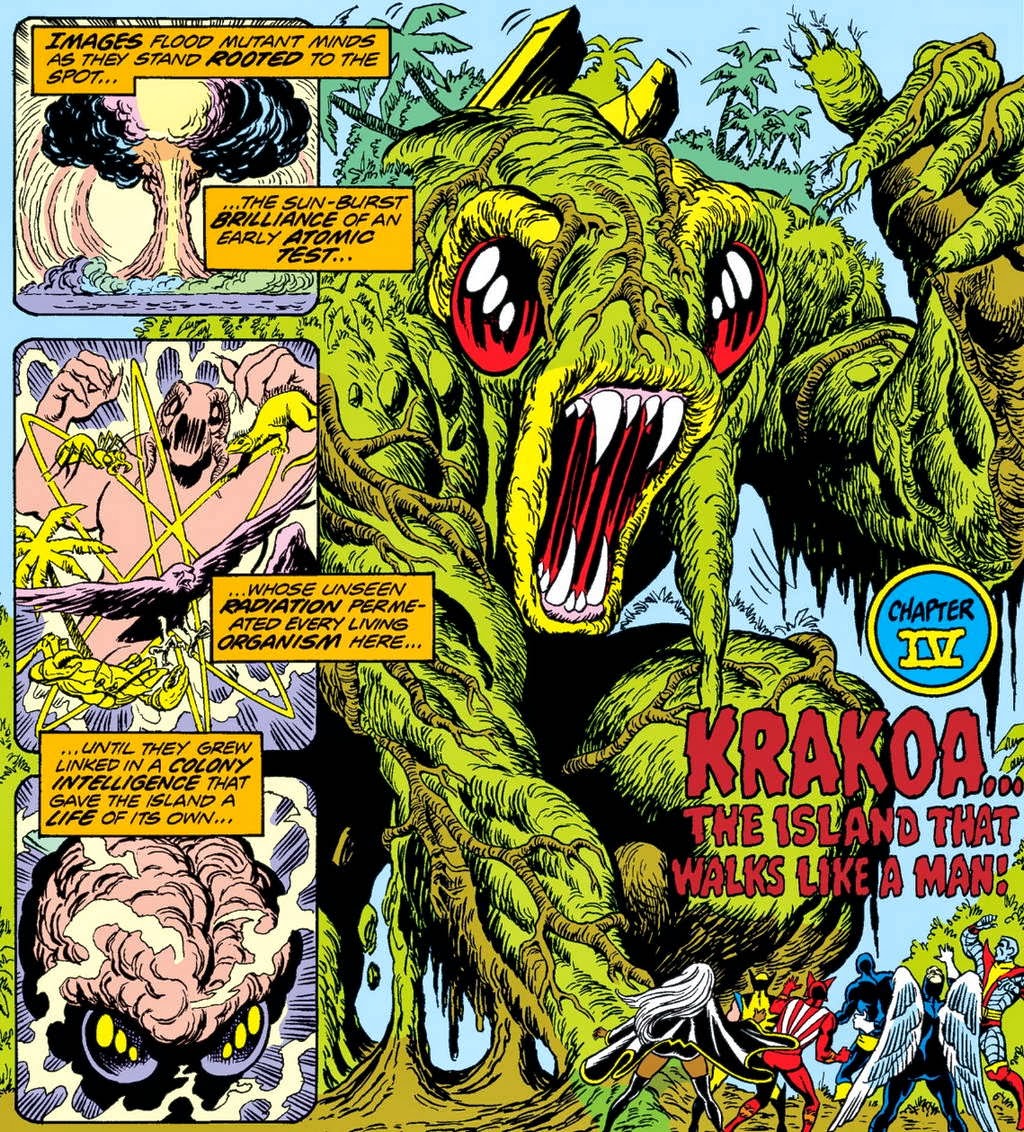 ^Krakoa from Giant-Size X-Men #1 looking startlingly similar to our issue cover and the battle themes throughout this issue.

The X-Men battle Proteus’ army of automatons and homunculi until Proteus is ready to reveal his secret garden whilst dressed as a Highlander (there can be only one!).  Perhaps in reference to Frances Hodgson Burnett, Soule our author here, is utilizing the garden as a symbol for the regenerative familial root properties a garden may evoke as it did in the original Secret Garden tale as well as the obvious biblical reference.  While once wheelchair-bound X is introduced to the amazing garden exactly like the character Colin from the original novel, here too are quite contrarian lead villain is monologuing an introduction of his cultivated masterpiece to the captive X-Men and more particularly to X.  Proteus and Mary of the Secret Garden of course both being rendered orphans by the tragic deaths via terrible disease of their parents and both needing to create an escapist reality so they do not have to confront the actuality of their terrible lives.  Moira Mactaggert, his mother having died from the Legacy Virus in a series of comics collectively called “Dream’s End” as discussed above.  Well, here we are, at the end of the imagined reality warped rabbit hole designed solely by Proteus who has allowed us the readers and X in to see his secret garden.  True to form, Proteus would now like to discuss Xavier prime’s Eden dream of peaceful coexistence between mutants and humanity.

Proteus uses the mentally fettered folk of Fetter’s Hill hellscape to prove his point to Xavier that humans are awful yet claiming that fundamentally it would zero out into a primordial garden of Eden as the town ethos reverts to its most base form of existence.  However, as X retorts, “This isn’t the way Proteus.  None of them would have chosen this if they’d known what it meant!” And of course, they didn’t, because it is really just a reflection of the reality that Proteus wanted to create irrespective of the town’s actual desires.  Proteus controlling which reality warping thoughts become effectuated while repressing those which would not have fit into his master plan as he holds all of the actual reality warping ability and power.  Proteus then unilaterally decides he won the non-argument with X and that his utopia of recreated Eden should be the unfettered reality for all of reality and decides to leave behind the shackles of Fetter’s Hill.  The final panel leaves us with an explosive onomatopoeia “Krakoaboom!” and the assumption that Proteus’ warped reality warping is coming for us all as Bishop predicted in London.

Now, Proteus is claiming that the citizens of Fetter’s Hill wanted to construct this reality.  Untrue.  The reflections shown of the reality reflect his preferences as he is dressed as a Highlander and picks a combination of dragons and knights to fight his battles with the oncoming X-Men.  All of the minicircle panels of human horrors are male-centered fantasies which reflect simultaneously: his experience with his womanizing alcoholic and abusive father, and his escapist George R.R. Martin dragongasm.  Showing how he perceives adult males want reality as a drunken and debauched mess while also effectuating his childish desires for a Tolkien reality landscape with him as the god-king in control.  Presumably, when his abusive father would beat him young Proteus Kevin would escape to his dragonland to protect his fragile mental state.  Now we all are privy to the privy that is his innermost desire and next issue we will see our heroes reject Proteus’ version of harsh abuse induced reality.

Final Thought: Nothing really happens here of relevance beyond a nice reference to Giant-Size X-Men and Krakoa while building to an inevitable confrontation between X and Proteus.  We get a good garden metaphor as Proteus is trying to grow beyond his original fettered existence.  Can you tell I rolled my eyes at the name of the town involved?  Anyways, we establish on the first page that everything the X-Men are experiencing is probably on the psychic plane via Gambit & Archangel’s dialogue bubbles as shown above.  As such the consequences do not seem as dire as they were when actual reality was being compromised back in London only a few issues ago.  I hope there is a confrontation between X and Mystique v. Proteus for our final showdown which won’t happen for another two issues presumably to give us our typical fully fleshed graphic novel format of six issues.  Mystique having killed Proteus’ mom seems like a story and old grudge that needs to be told Soulely here.