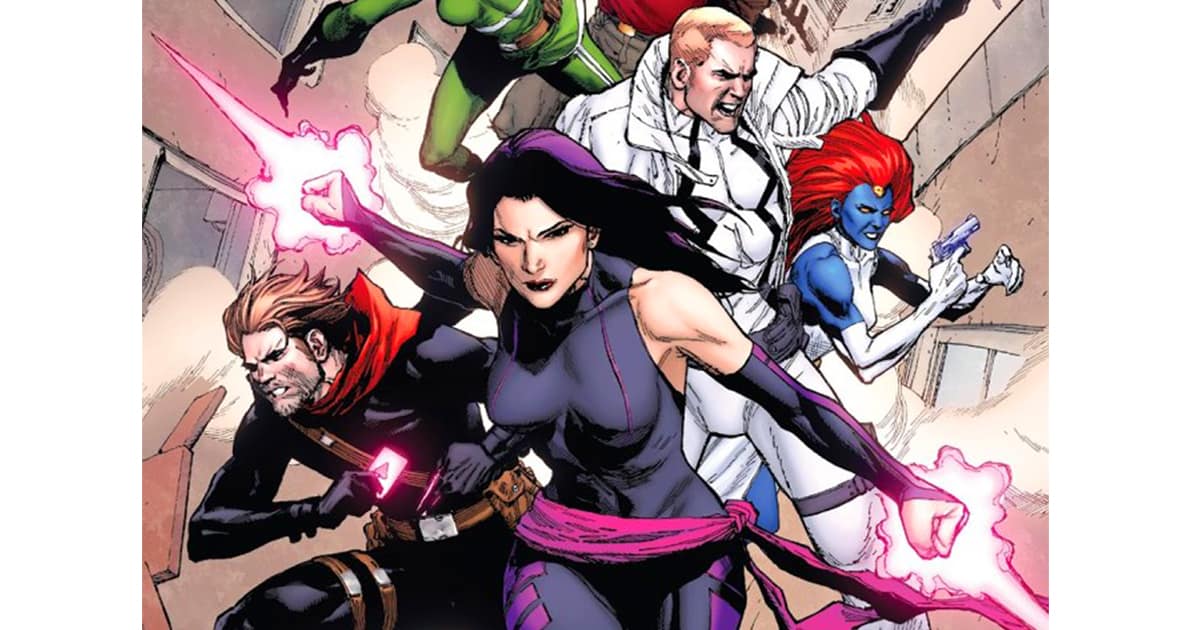 The X-Men recover in London from an attack by the newly resurrected Proteus as Proteus himself takes control of a town in Ireland right in time for St. Patrick’s Day in the real world. 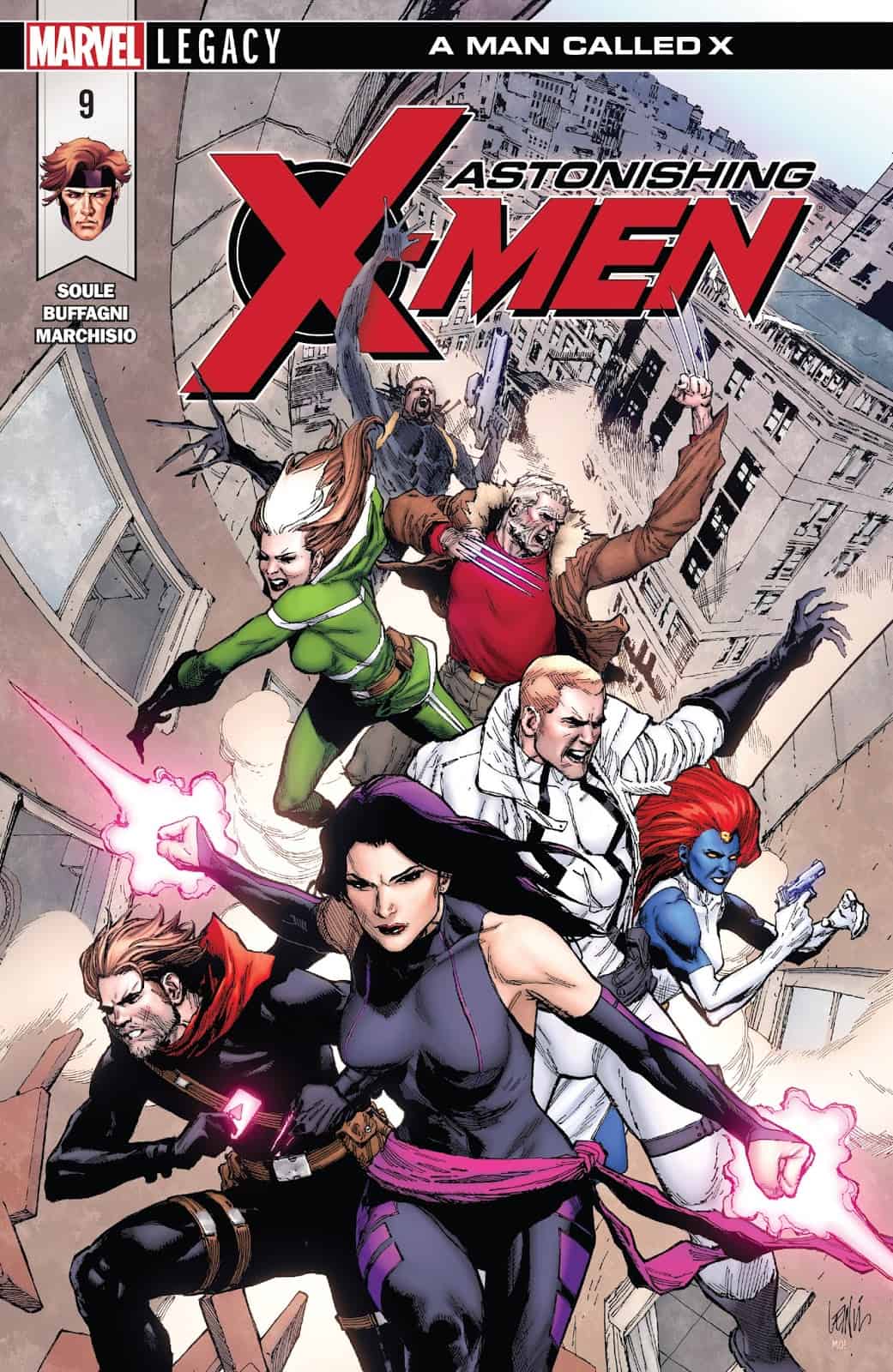 What you need to know:
Proteus, a reality warper, escaped from the astral plane during the fight between Xavier (X?) and the Shadow King.  None of whom apparently can ever die.  The X-Men recover from the initial fight with Proteus as Proteus assumes reality based control of a small Irish town exiting London stage left.

What You Will Find Out:
People are terrible when given absolute power and Proteus lies. 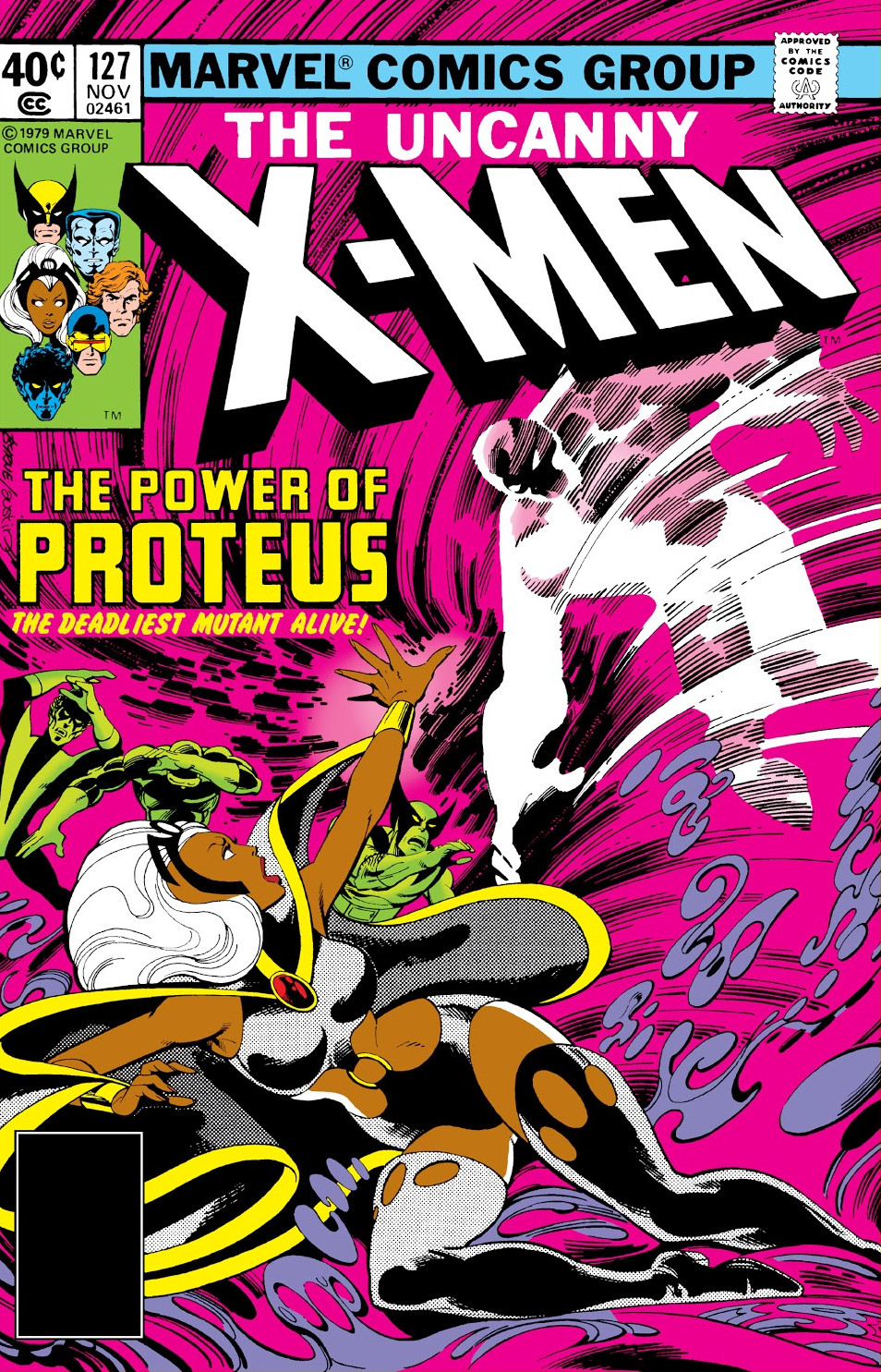 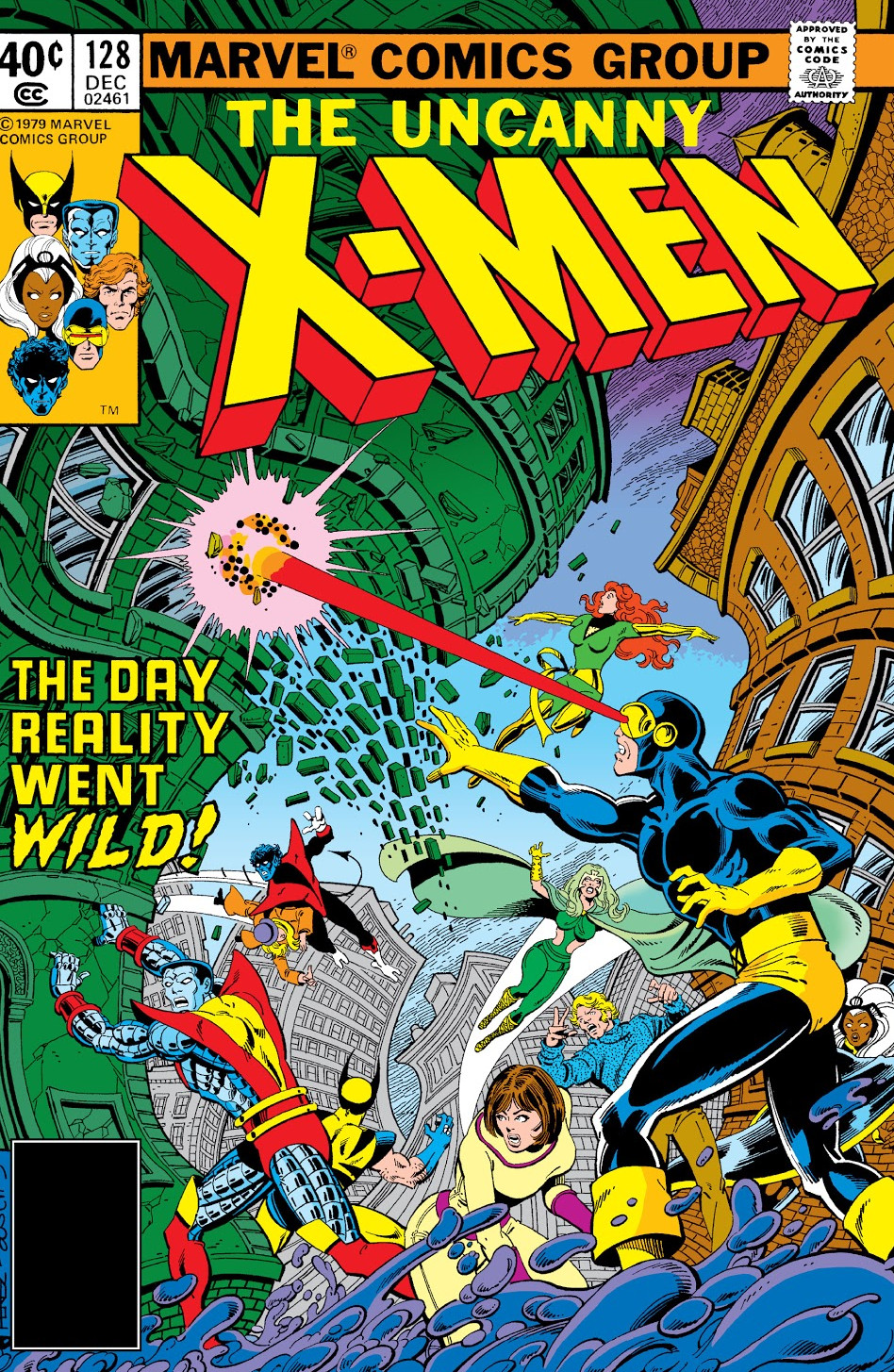 If we recall from our initial battle with Proteus, he is the offspring of now deceased via Legacy Virus X-Xavier flame Moira MacTaggert and an abusive father.  Angry at having been cooped up, Kevin runs amuck destroying a town of people with his reality warping powers whilst throwing a tantrum, and according to Astonishing X-Men, A Man Called X, all while 10 years old (right).  To review Kevin’s powerset we have to recall that he can warp reality, although the idea of reality warping in the 70’s wasn’t quite what it is today especially with the established reality warpers like Beyonder, Scarlet Witch, Legion, and Molecule Man resetting Marvel Realities every five or so years.  Back then reality warping basically meant he could make matter move sometimes and mostly lamely as shown on the cover of UXM #128.  Now, Kevin also has an Achilles’ Heel of metal, because why not?  His secondary weakness is that he needs new hosts as the extreme nature of his powers burns out his host body thus he needs to claim new bodies. Basically permanently possessing them and killing the original host or if a writer is feeling generous the original host can be exorcised of the Proteus possession and survive, however initially this was not the case.

In the original storyline, Colossus takes Proteus down because his being metallic is finally directly and conveniently relevant to the plot.  In the prior two issues of Astonishing we discover from Kevin’s point of view that he felt he was only 10 years old, only wanted to escape his prison created by his mother in order to see his father, and was beaten to death by the X-Men especially Colossus who is fortunately not on this team to suffer any direct wrath of payback from Proteus.

In perhaps the most relevant and in-depth portrayal of Proteus to my mind is the World Tour storyline in Exiles.  After Scarlet Witch creates the House of M famously Proteus is reborn and takes on the majority of the Exiles whilst hopping realities fighting them and reigning overall havoc killing several alternate reality heavyweights via his vampiric possession and even some of the main characters of the Exiles.  Also, he has a crush on team leader Blink, because sexual feelings are something a 10-year-old has apparently according to Astonishing.  Anyways, my point is, the monologuing of the first two issues of this story arch have Proteus attempting to claim that he is just an innocent boy and the X-Men are big meanies. 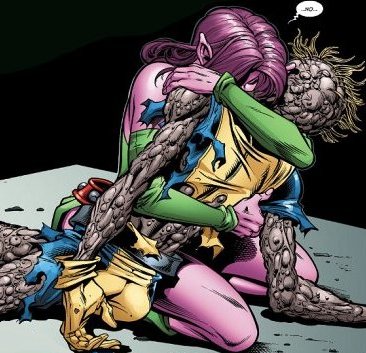 Well, sorry Kevin, but you killed Mimic in Exiles so your whole story doesn’t hold water.  You had a sexual style crush on Blink so you are not ten.  You have killed hoards of host bodies and destroyed entire realities, but woe is me I am a misunderstood evil psychopath wanting sympathy.  The X-Men from reality prime do not know much of this because nobody really interacts with the former Exiles, but we as readers need to know what an evil bastard he is and never believe his lies. 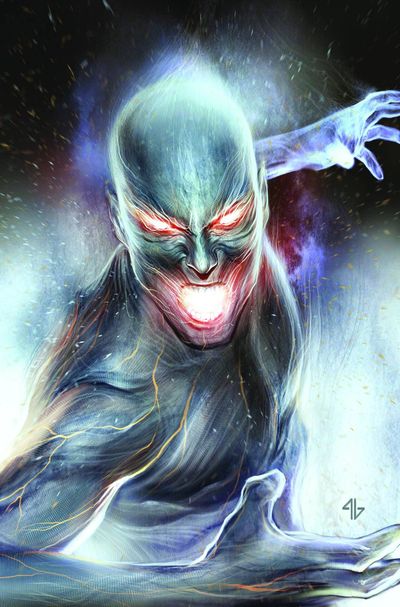 Proteus gets resurrected in the Marvel Prime reality, 616, when mystic vampire Selene counters death in the Necrosha event and apparently Kevin’s been hanging around the astral plane ever since as a captive of the Shadow King which sort of brings us to our present story.  So, if the last two issues confused you just remember: Proteus bad; X-Men good.  Except for X, we haven’t really had time to decide if Astral Xavier’s claims of possessing Fantomex are valid or if it’s really him or a ploy of the Shadow King.

The Problem of a Resurrected Xavier:

So, Phoenix 5 possessed (so much possession!) Cyclops kills Xavier in AvX as a result of Tony Stark’s idiocy.  Therefore: corporeally Xavier is dead. Not to be dissuaded, evil Nazi Red Skull takes Xavier’s brain and implants it into his own in order to gain Xavier’s massive telepathic abilities and enact the 3rd Reich on 616 reality.  He doesn’t succeed because Nazis are just awful. Well, the all-consuming plot of Uncanny Avengers, Xavier’s brain is finally destroyed by Rogue and the Human Torch.  Therefore, Xavier’s brain and abilities should be gone right?  WRONG! Oh! He’s on the astral plane too because that happens to powerful telepaths as there’s precedent with Shadow King so it was actually a good move by Soule to bring back Xavier astrally as with Shadow King.

Funnily enough, the X-Men involved in Astonishing are as follows:

1.) Psylocke = Has died and resurrected by a reality warper
2.) Gambit = Has died and was the Horseman of Apocalypse Death
3.) Archangel/Angel = Was the Horseman of Death also and has possession issues from his Archangel side which were seemingly instantly cured by a wave of X’s hands as a creepy “gift”
4.) Rogue = I just nerfed Xavier’s Brain, yet here he is again
5.) Old Man Logan = I got possessed in the future by Mesmero and killed all the X-Men including telepaths who couldn’t exorcise the possession for reasons which remain unexplained.
6.) Bishop = I still haven’t forgiven him for his Messiah Complex behavior, yet somehow he’s a good guy again since Uncanny X-Force and has opinions about the appearance of the green ball of goo sun that was Proteus’ newest form of inception.
7.) Mystique = an ex of X ha! And not believing any of X’s assertions of being a resurrected Xavier.
8.) Fantomex = Multiple personalities & brained faux French weirdo from a Weapon X dimension side project now stuck by X in the astral plane because why not imprison someone where you were imprisoned and steal their corporeal form?

Anyhow, now we have a resurrected Xavier, hereinafter referred to as X and Proteus, the little son of an ex of X – and we can get to our plot of the issue at hand:

The Plot Strings Theory Knit Tighter:
We start with an untidy mess of finally tights-clad Psylocke and Fantomex outfitted X being in an amalgamated pile of vaguely James Cameron Alien looking person hybrid which looks incredibly painful.  Psylocke of course having been resurrected herself by her reality warping brother Jamie is an interesting choice for this reality warping battle and in all probability should be capable of an unraveled “poof” of non-existence by Proteus aka baby 10 year old innocent yet murderous Kevin by unthinking Jamie’s resurrectional reknitting of his sister but I digress.

So, Archangel, showing he too wears pants now and is no longer subject to evil apocalypse possession death seed control by a wave of X’s hand a few issues ago, uses his metallic wings to separate the ugly reality warped combo of Betsy and X.  Huzzah!

Meanwhile, Old Man Logan decides to stab X because Fantomex has a healing factor and that’s what Wolverines are wont to do.  The metal of his claws should negate Proteus’ influence as Fantomex’s body heals X.  Wrong! X somehow rewrote all of Fantomex’s DNA to make the body his and got rid of the healing factor because… logic?  I mean I’d get rid of a healing factor too given the chance to possess someone else’s body that had one because I hate recovering from injuries too. Maybe that’s me. Why should there be consistency of the corporeal form when the astral presence is so easily altered seems to be the point being made here. 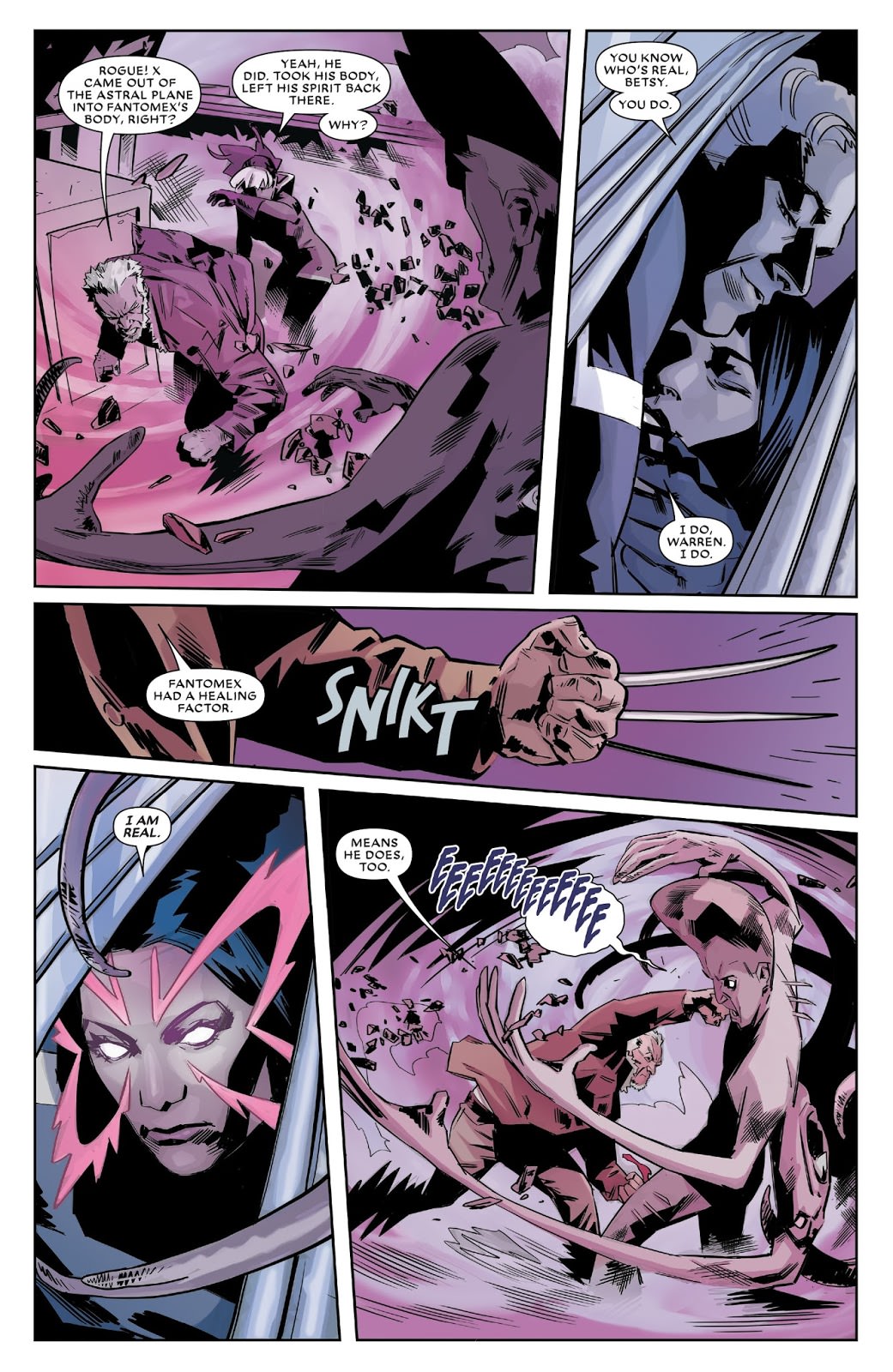 Ouch! That’ll ache for a while (pronounced here for St. Patrick’s Day in Irish as “Ach!”)

So the Proteus infection of the last issue of Psylocke and X has been averted nay reverted with the consequence of an injured and boxer brief clad nonagenarian as the Blackbird takes flight to pursue Kevin, who is now home alone.  Bishop explains how the green ball of Kevin somehow bodes ill for the entirety of the planet and he’s like 97% sure that this time, this is the thing that destroys the future.  Not Gambit, not Hope, not Cable, but Proteus too.  The future has problems man.

More St. Patrick’s Day Fun!
We now cut to an idyllic scene of an Irish pub on the week of St’ Patrick’s Day where we discover random redshirt 1 has a crush on redshirt 2’s girl which will be important for our dramatic concluding commentary on the terrible nature of our average human.

Kevin arrives.  He’s a good guy 10-year-old as established via pedantic villain-loguing in prior issues painting himself as a magnanimous former prisoner of psychic war and gives a girl a puppy.  Kevin now erects a protective wall to encapsulate his reality warping powered Irish town which then freaks boxer-clad X out back on the Blackbird as X simultaneously parades his manhood as if on holiday.  Xavier now proclaims Kevin is creating the astral plane on Earth!

The issue concludes with the startling discovery that people given sudden absolute power would be total petty jerks with it as redshirt 1 spontaneously combusts redshirt 2 to get redshirt 2’s girlfriend.  Although, if everyone has the power to alter reality: how did red shirt 2 not just rematerialize himself and why would redshirt 2’s girlfriend stand for murderous redshirt 1 when she could alter reality by presumably returning redshirt 2 from the poof? I don’t feel that the explosion of redshirt 2 needs to be final in this reality of a warped reality-warping possessive prepossessed resurrected insurrectionist.

Will the X-Men be able to expel the snake from Ireland?  Find out next time true believers!

Rating: 10, just for being in Ireland for St. Patrick’s Day on purpose.

Final Thought:
I think Proteus is a pretty cool villain up in the ranks of Jamie Braddock and Scarlet Witch and think that it was a logical flow to have his release after a duel with the Shadow King as Proteus was last seen in the King’s domain during Necrosha and that story has never really been resolved until now.  I think the typical reality warper’s lack of a sense of perspective has been well portrayed by Soule as Proteus casts himself as the victim and hero while the X-Men are the mean bullies trying to put him in time out.

I think resurrection is a current X-Men theme a la Xavier, Jean, Logan, and Multiple Man and continues in this title. The concept of possession is prevalent to this storyline as most characters suffer from direct possession or have a history of being possessed or possession related problems.