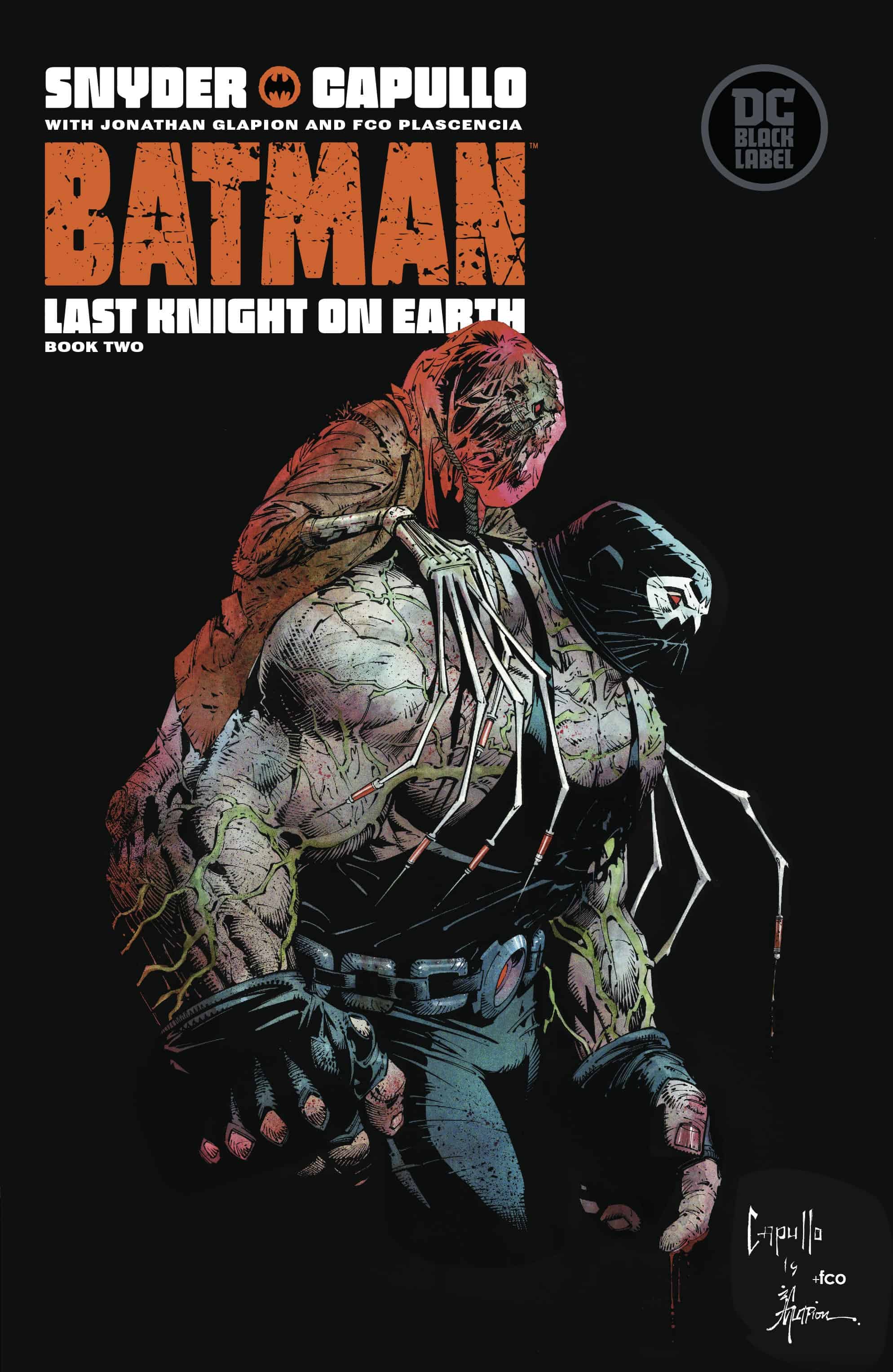 The world has been destroyed, and Batman is on a quest to find out who’s responsible. But when villains from his past begin to complicate things for the Dark Knight, he finds an unlikely ally in a place known as “the Plains of Solitude.”

The acclaimed duo of Snyder and Capullo continue what is being referred to as their last story together featuring the Dark Knight with a psychological study on the character’s internal framework and an exploration into the impact of our seemingly eternal struggle of good versus evil. 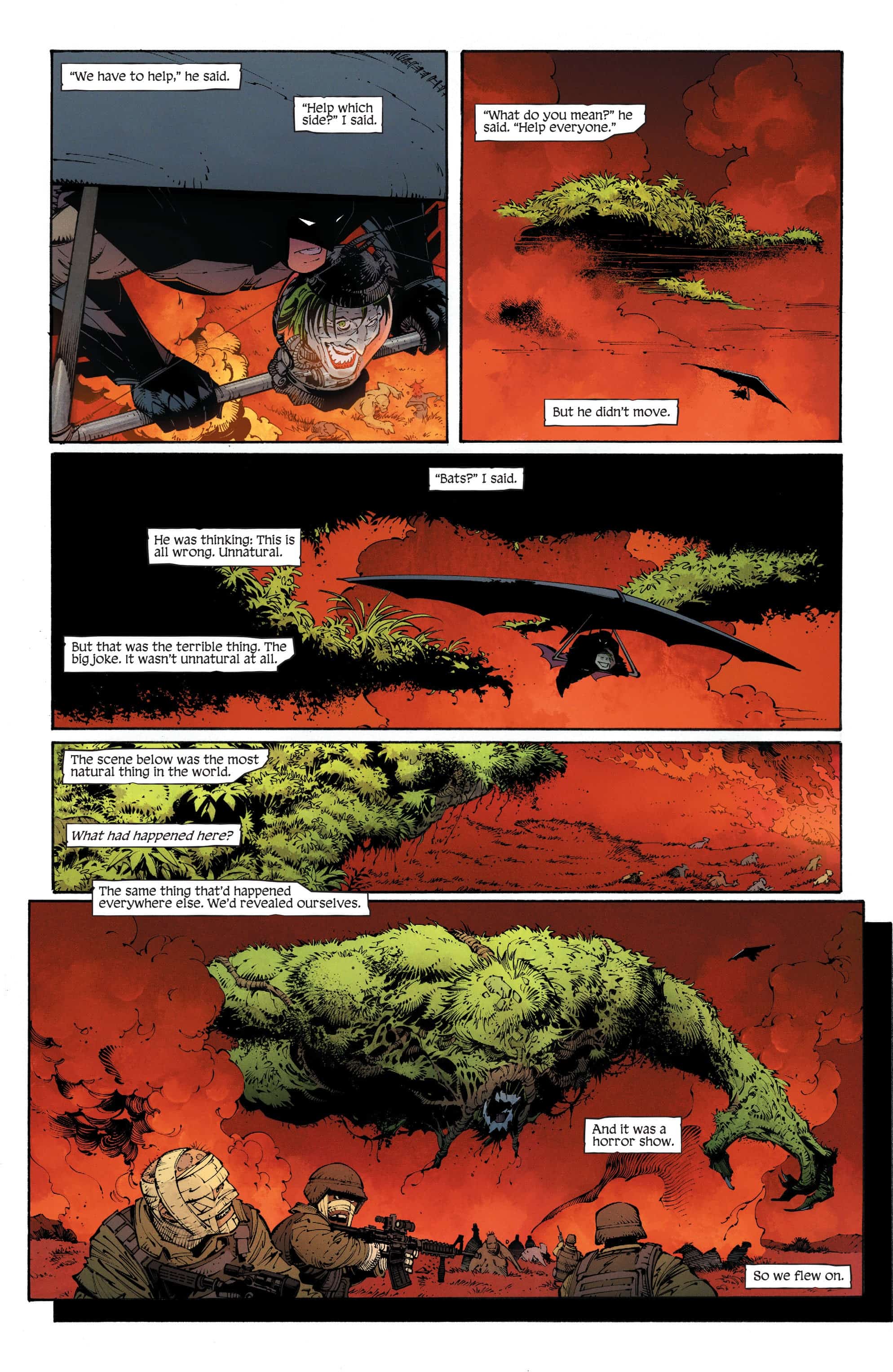 Make no mistake, The Last Knight on Earth is a series that hopes to encapsulate everything unique and original that came about thanks to this fan favorite creative team. It’s the type of series that can easily define Snyder and Capullo’s entire run on Batman. Its effortless understanding of Bruce’s psyche – mixed with satisfying moments of fan service – create a book that ultimately feels like everything has fallen into place.

The Last Knight on Earth isn’t just another high concept Black Label series from DC. This one has been earned through years of consistent and near-brilliant storytelling. It stands on the shoulders of stories like The Court of Owls, Zero Year and Endgame, using not just simple narrative threads, but their fundamental concepts to shape this world we see in the second issue.

By the time we reach the Plains of Solitude at roughly halfway through the book, the overall structure of the series becomes much more clear. With an almost exact midway point, the first half of the story acts as an introduction into this new world we have been thrown into. After issue #1 brought reader’s into this new understanding of Batman, half of issue #2 expands on the dire state of the world around him. With the world-building established, we transition to the second half of the issue where the motives and intentions are made known and the story becomes more fully realized. This transition point, moving from establishing a stark new reality for our characters to delving into the results and how to reconcile what has been done, is primarily where this issue stumbles.

Pacing can be a particularly interesting challenge for three issue miniseries, especially those with such incredible depth to explore. There is simply a lot going on in Batman: The Last Knight on Earth, and issue #2 gives the impression that it was tasked with doing a lot of the heavy lifting narrative-wise. This isn’t necessarily a bad thing, but it does warrant a mention. There are a few moments that feel either out of place or that more important information could be covered. However, the total length of the book grants the story the room it needs to breathe. This is the saving grace of issue #2, and more than likely, the series itself, as it can afford to expand on the fan service moments while still reserving enough time to cover critical aspects.

There is a lot of discussion that can be had surrounding the narrative elements explored in issue #2, but when it comes to the artwork, I’d like to simply commend Capullo, Plascencia, and Napolitano for their exceptional work. Batman: The Last Knight on Earth wouldn’t be the same without Capullo’s iconic illustrations. This story thrives on the dark, yet grand visuals that only Capullo can pull off, and Snyder seems to have a keen understanding of this. The duo are arguably the most effective pair in comics today, suiting one another’s style remarkably well. The artwork we find in Batman: The Last Knight on Earth #2 is a testament to their unique partnership. 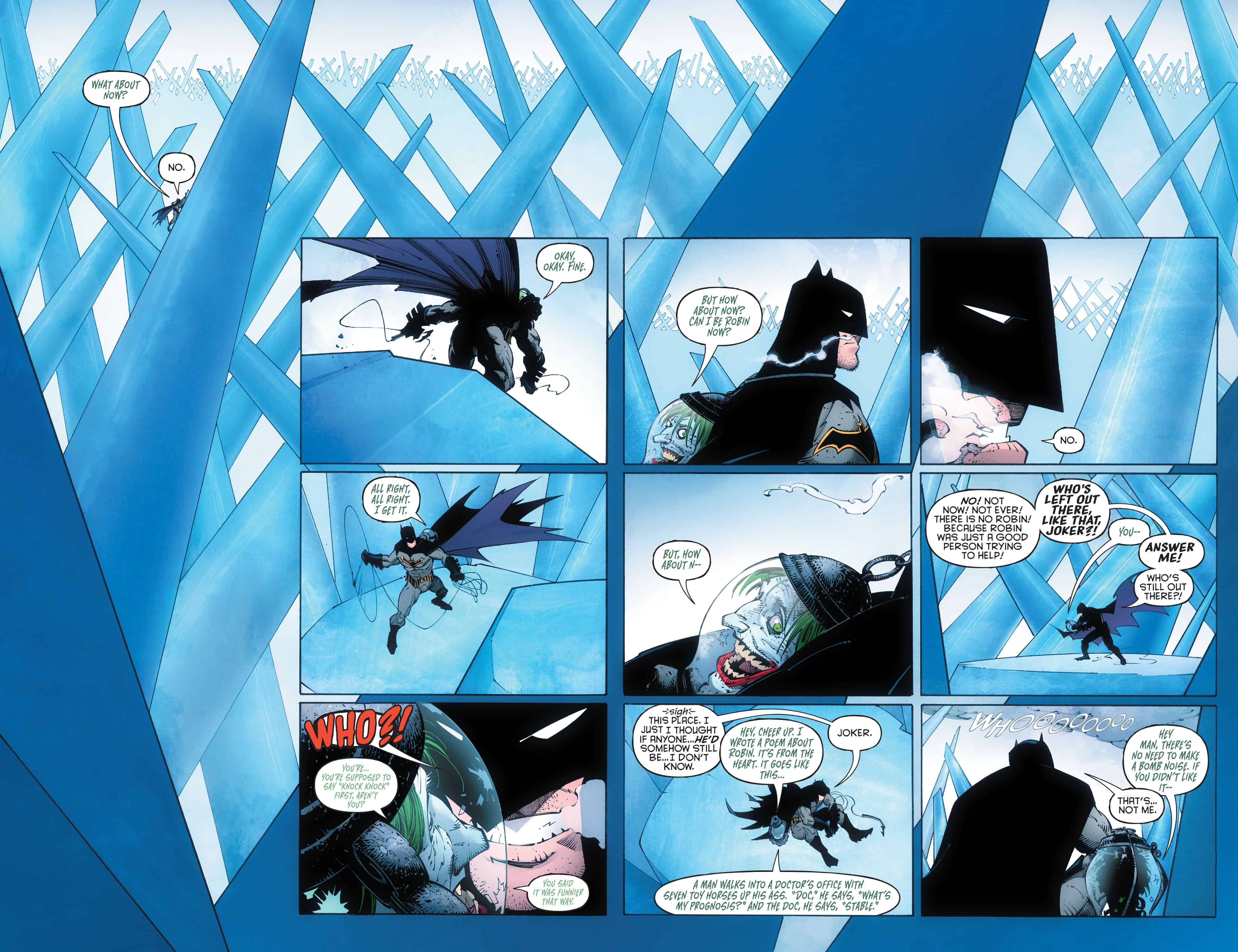 After learning more about the world Batman has found himself in, issue #2 elaborates on what brought us to this moment through the lens of Lex Luthor and his ongoing feud with Superman. The chain of events that resulted in Doom presiding over Justice are both genuine and powerful, but they never lose focus on the overarching theme of basic good versus evil, the duality that drives Batman and superheroes in general. It’s this exploration that allows the story to simultaneously dive into an internal analysis of Batman while also relating it to much larger concepts in our world today. The eventual result of these events has given rise to Omega, a mysterious new force in Gotham that must be reckoned with.

But we must first ask, who is Omega?

Ultimately, Batman: The Last Knight on Earth #2 is a momentous occasion for those who have followed this creative team’s journey over the years. It’s a remarkable book that leaves nothing on the table, delivering all of the epic storytelling and valuable insight into humanity that fans have come to expect from this iteration of Batman. The final issue will truly determine the success of the series as a whole, but issue #2 proves that it’s only getting better.

It seems Snyder and Capullo could pull off the rare feat of exiting the character on their best story yet!

'Batman: Last Knight on Earth #2' is a remarkable book that leaves nothing on the table, delivering all of the epic storytelling and valuable insight into humanity that fans have come to expect from this iteration of Batman.