REVIEW: Batman/TMNT 2 #5 (The Enemy of My Enemy is my Friend) 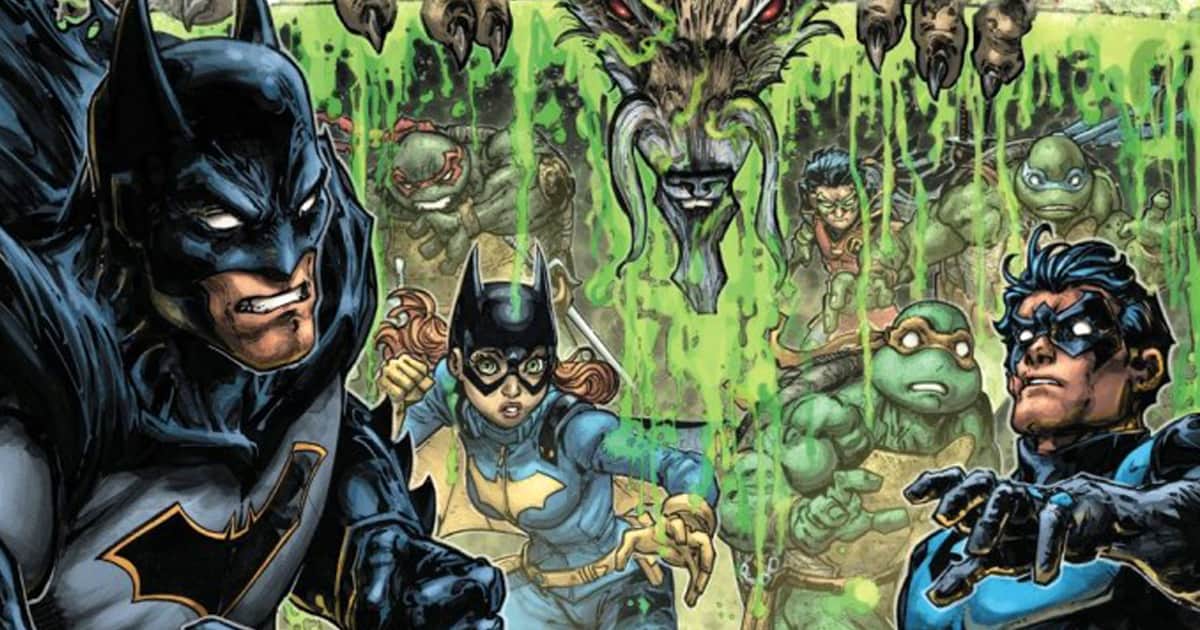 Donatello has taken the experimental Venom that Baxter Stockman developed for Bane. Splinter is in Bad shape, and A Rampaging Donnie may be the last hope to solve the deteriorating Venom Formula. 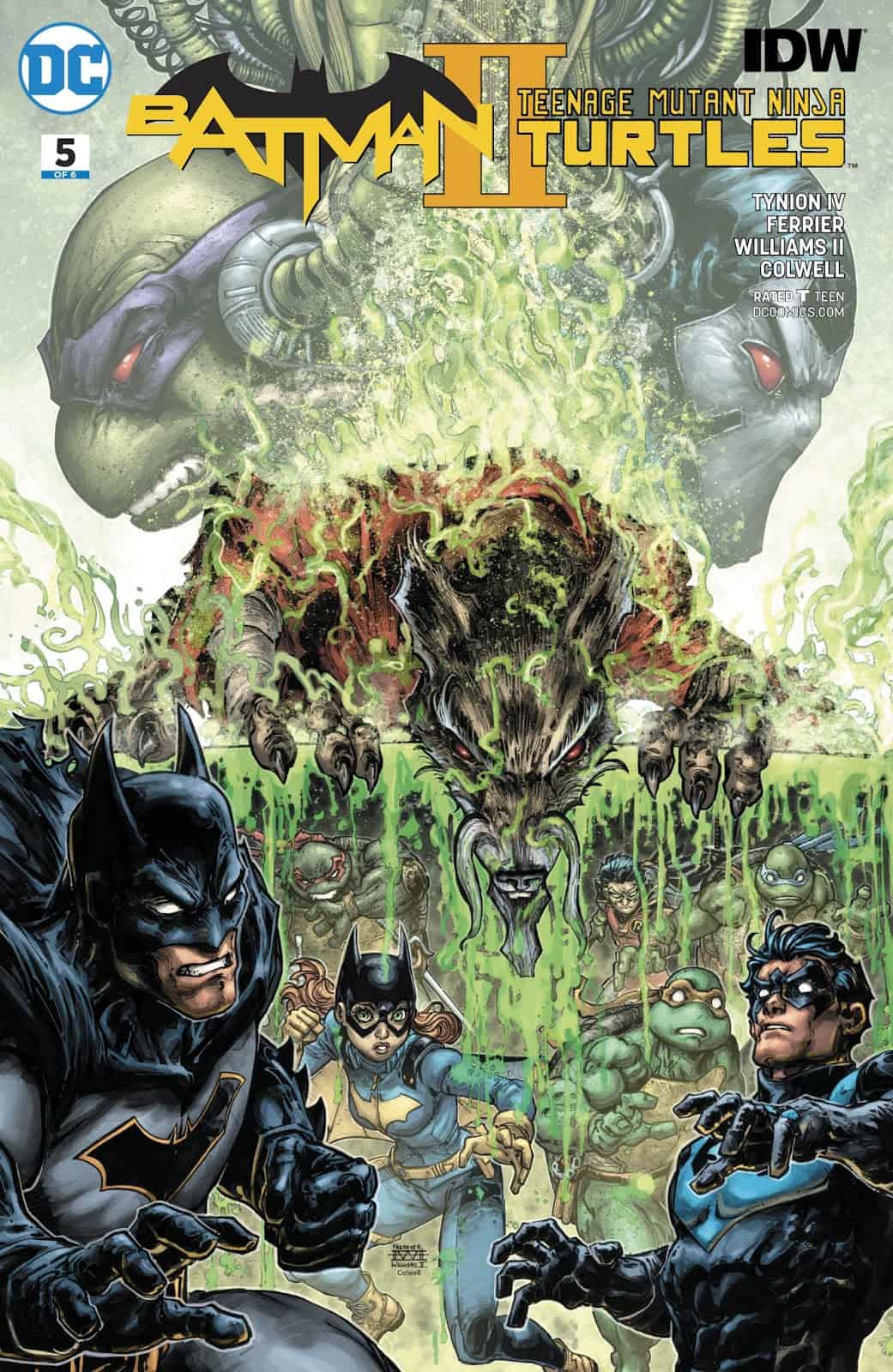 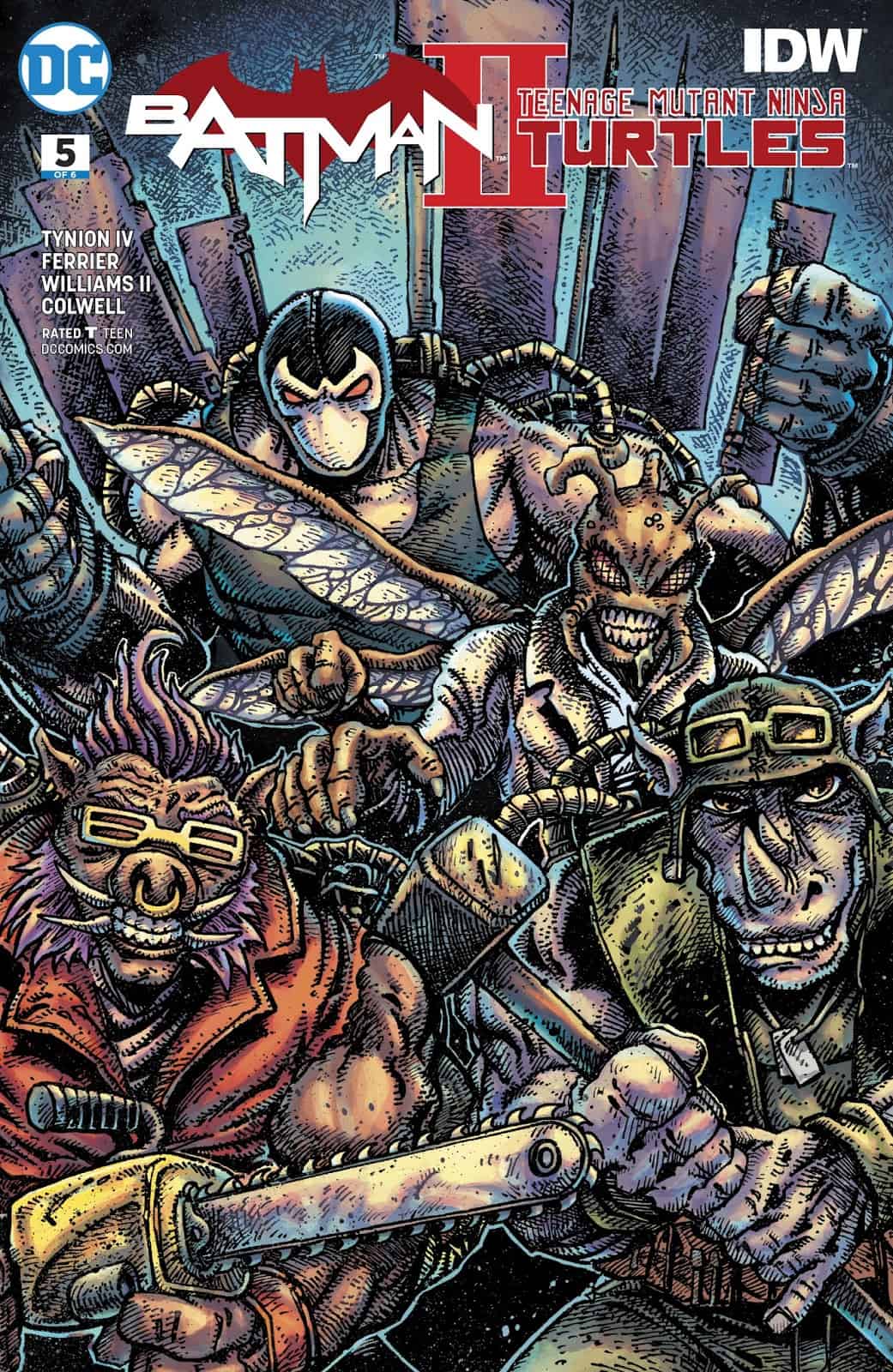 What You Need to Know:
Bane has taken over New York, he has the Foot Clan under his boot heel. After a terrible battle that the Turtles and Batman barely escaped from, Splinter was brutalized by Bane and is in critical condition. The Turtles escape but the damage has been done.

Donatello seems to take this harder than most and he decides to test the Venom on himself and become strong enough to take down the Foot and Bane on his own. 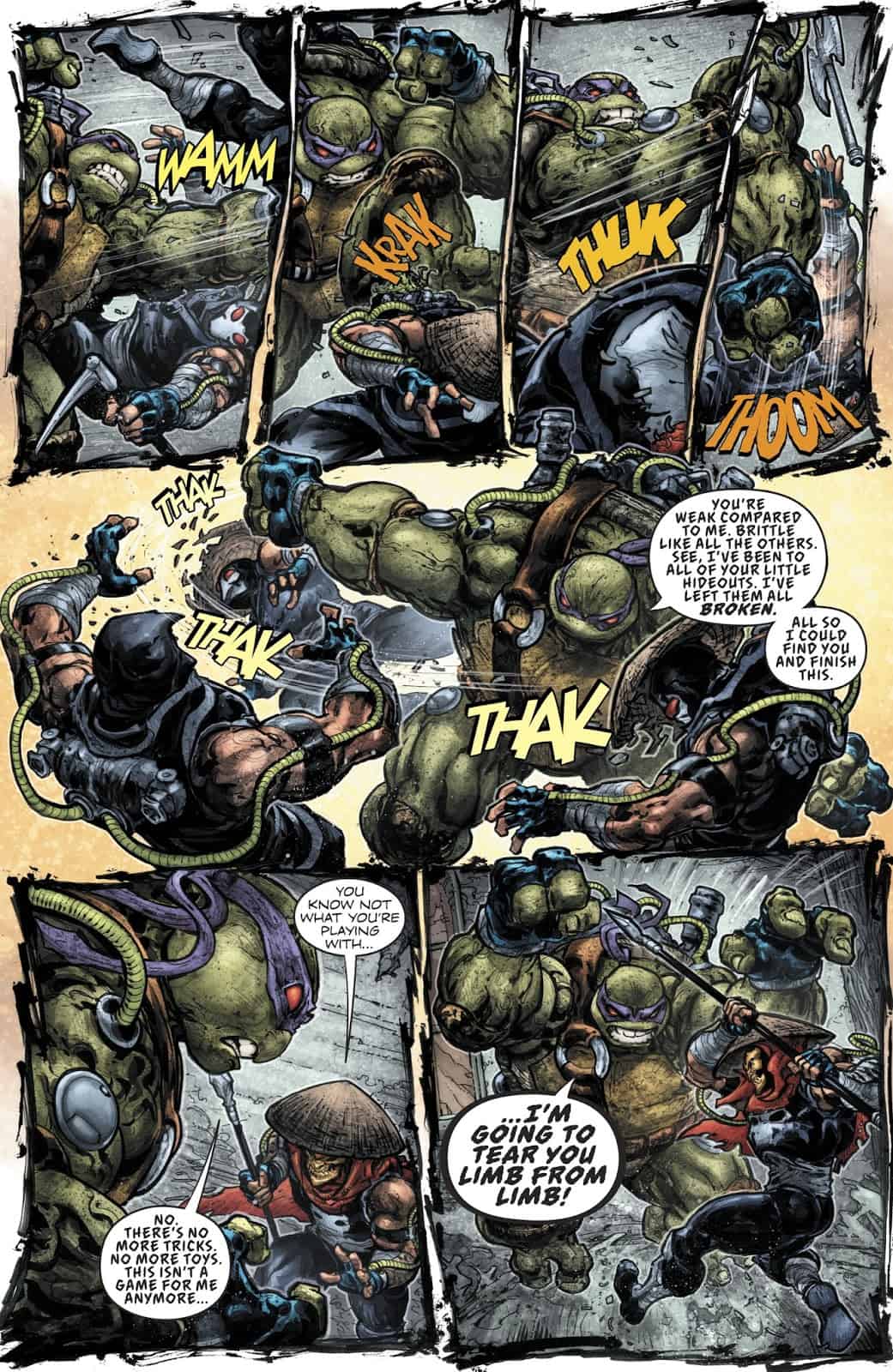 Batman and Leonardo try to calm his Rage, but Donatello is succumbing to the effects of the Venom. 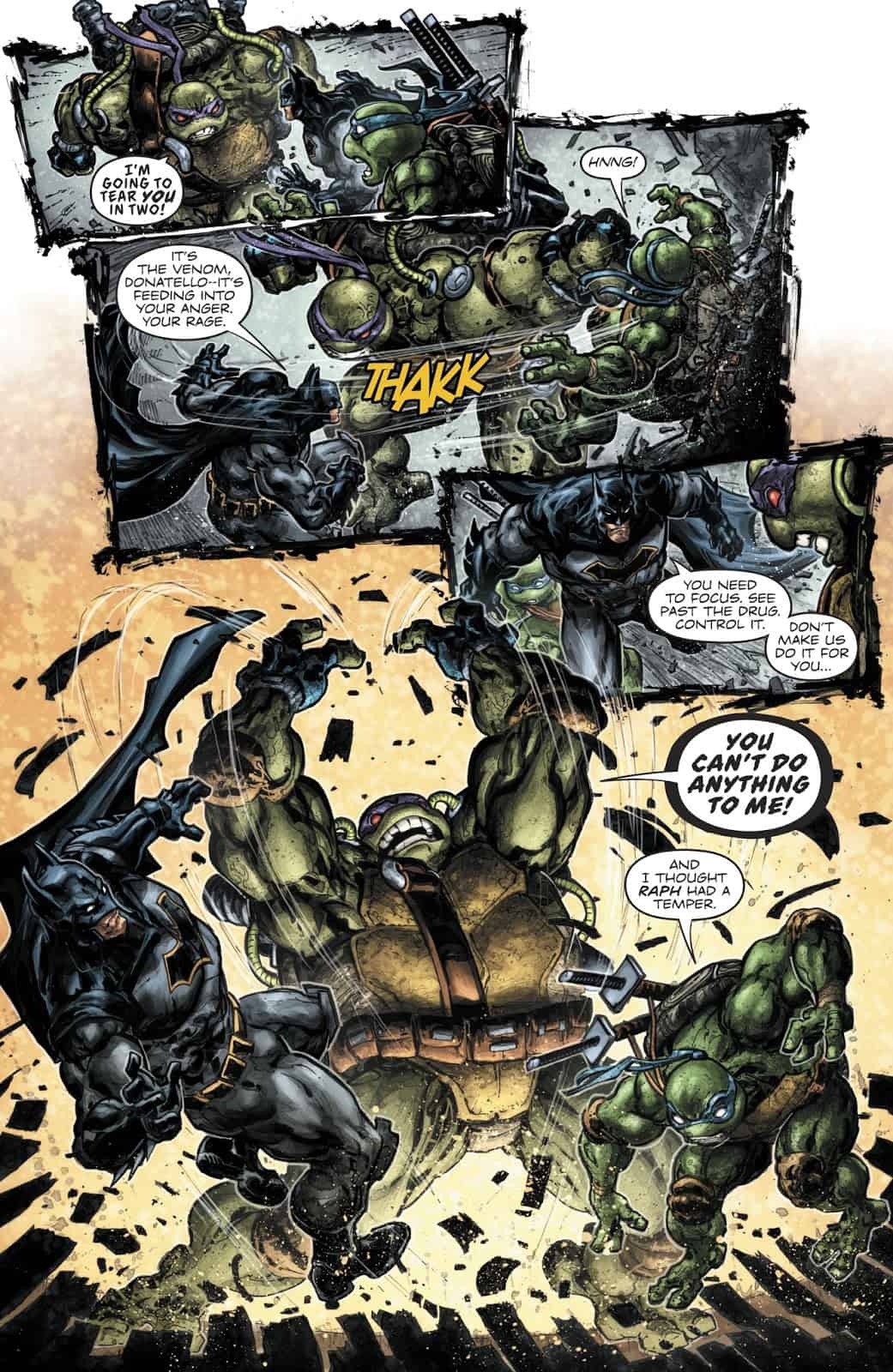 What You’ll Find Out:
Master Splinter was gravely injured by Bane. Raph takes care of him, but the prognosis is not good. Robin takes this opportunity to apologize. He started the battle that ended with Master Splinter being hurt. He tells Raph that he was raised to embrace his anger and rage by the Assassins that raised him, and that it is a struggle within to control that rage. Raph can relate, but Robin has an idea to save Splinter. They will open the Portal and take him to the Lazarus Pit below Gotham. 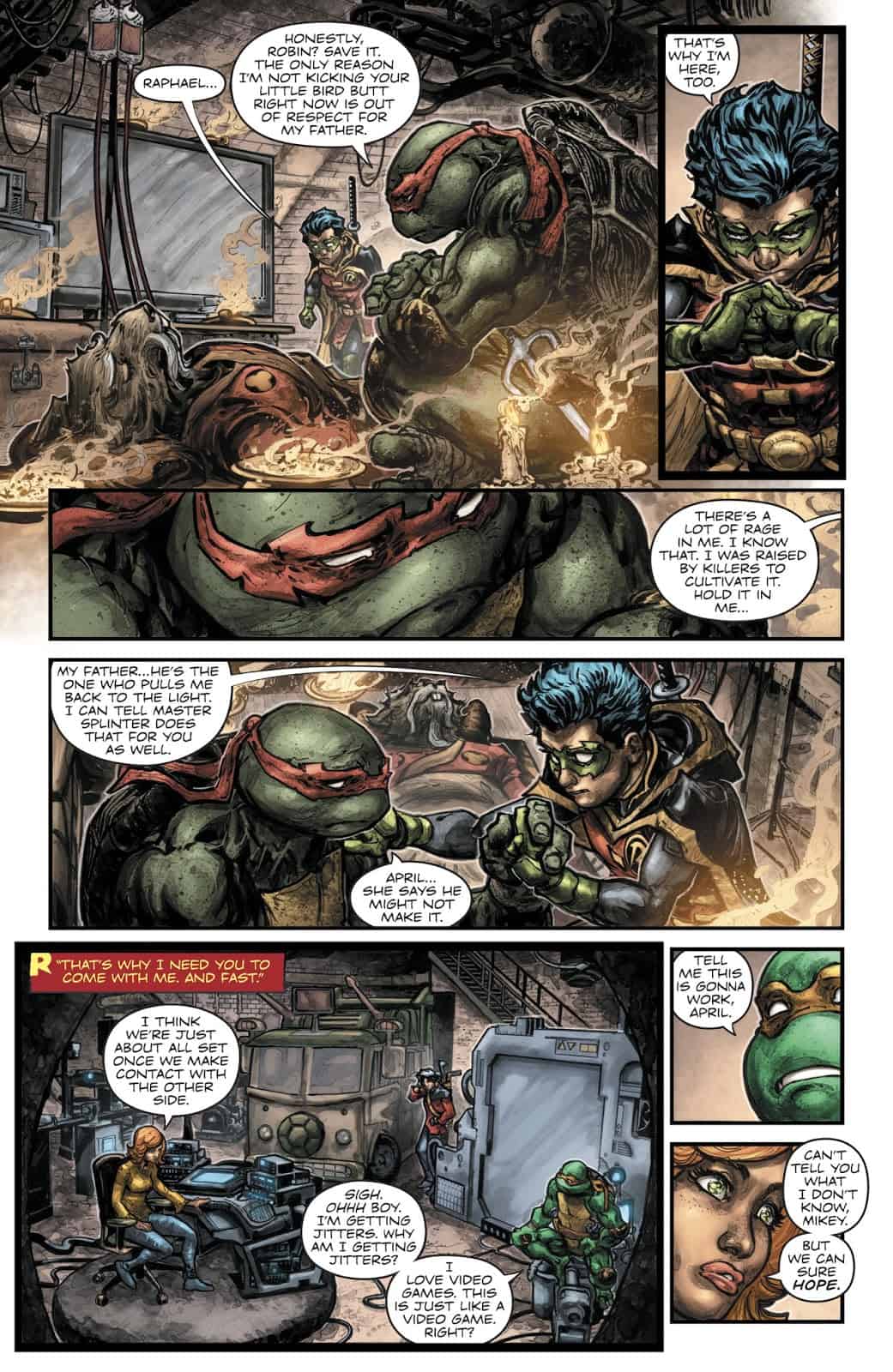 What Just Happened?
Their plan of action set April and Casey prepare the portal, with guidance from Batgirl and Nightwing. They know that there’s a chance that Splinter will return with the Madness of the Lazarus Pitt. Batgirl and Nightwing are on hand, but they are all hoping that they will not need to stop a Ninjitsu Master the Caliber of Splinter.

Meanwhile, Batman and Leo are attempting to Calm Down Donnie. They are trying to reach the Scientist inside the muscle monster. They show Donatello the degrading Venom Formula, Batman tells him that the very formula that he took is unstable. They finally Breakthrough and Donnie tells them he can create an antidote. 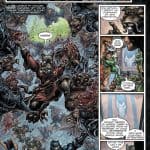 The Lazarus Pitt works and Splinter returns. He takes the madness of the Pitt out of the army of Ninja Manbats that were sleeping in the Cave. Splinter Credits his ability to overcome this with his Zen Meditation (boy was he Scary!).

Bane enacts his Plan to Take over the city of New York. He plans to weed out the strong and control the populace with his synthetic Venom formula. Donatello still in his Hulking form, demonstrates the effects of his anti-Venom on himself.

Now with their Plan in place and the means to put an end to Bane’s reign of terror, the team discusses the one thing that will finish bane as the leader of the Foot Clan. With his defeat, they know that they will only follow someone who is stronger. Batman travels to Ryker’s Island to find the one man who the Foot Would follow in lieu of Bane. Oroku Saki, the Shredder. 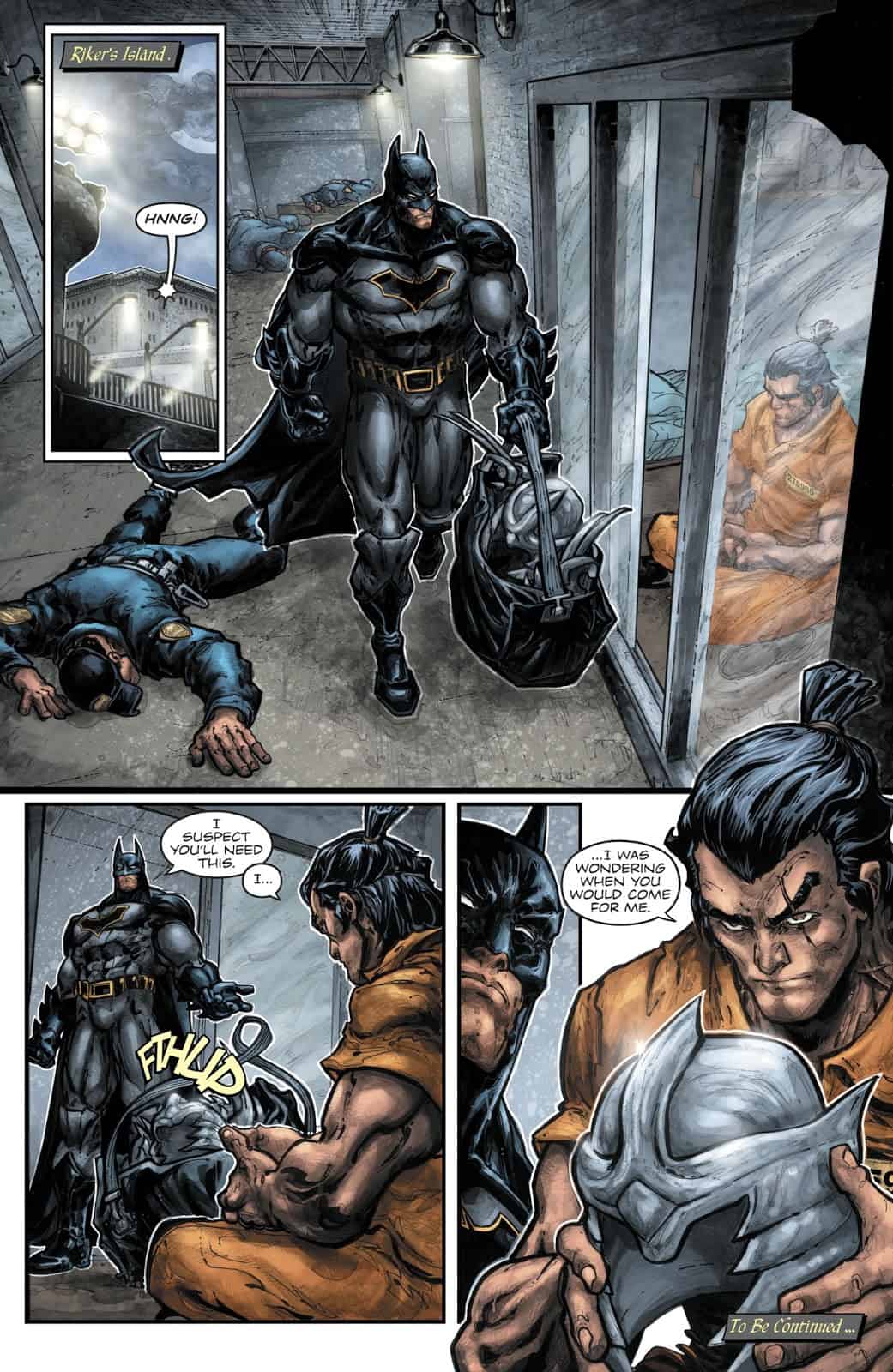 Rating: 9 / 10
Final Thought:
This story starts out with several emotional problems that the characters are going through and builds its way through a combination of action and family dynamics. It deals with loss, Inadequacies, and self-loathing. Enough that it is incredibly juicy and deep while holding the attention of the reader with the artwork. What a tremendous team of Tynion and Williams! They set the standards for TMNT and push the characters to their moral limits, just to keep us entertained. This gives us a glimpse of the characters in lights that we have never experienced before, and that is what keeps these two franchise’s both innovative and fresh. This is a great comic series, and if you have any love for either, I highly recommend reading this story.