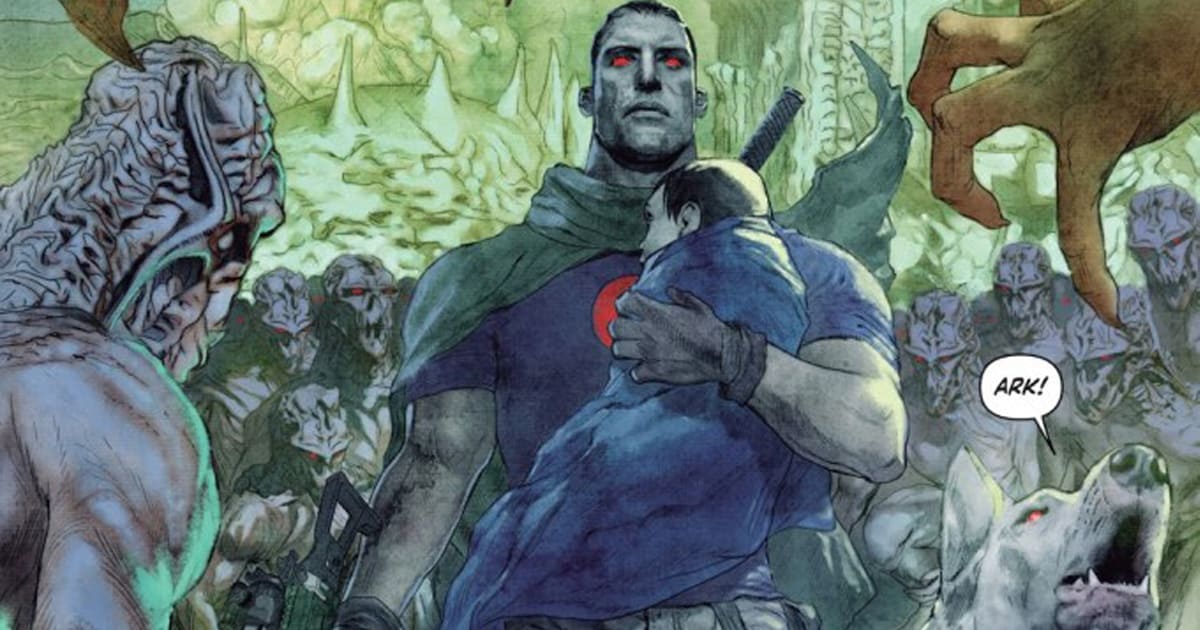 Bloodshot in a desperate attempt to save his young Daughter Jessie, travels to the Dead-side. Experience the entire story as Bloodshot does, as he is rendered blind! 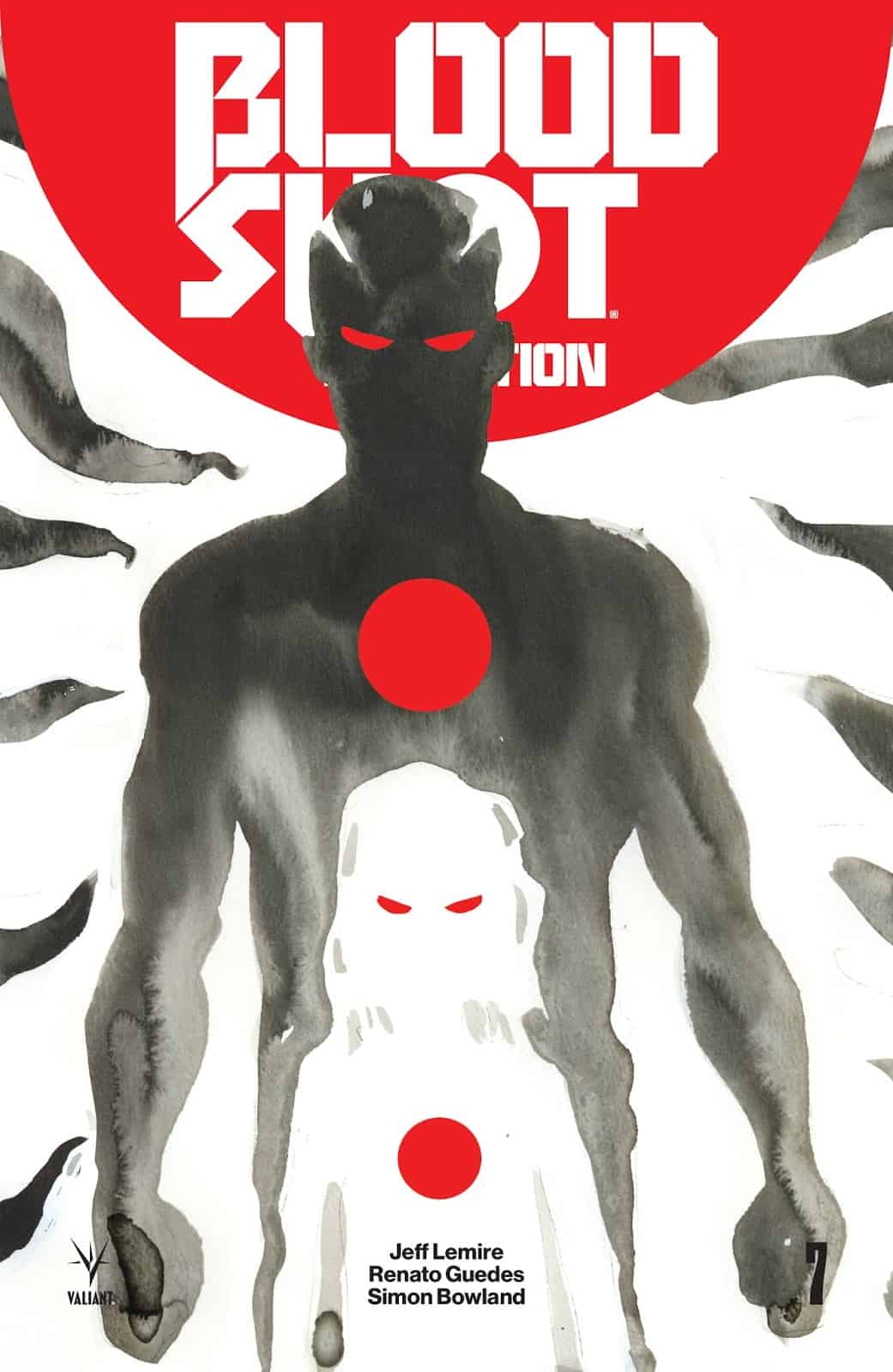 Bloodshot Salvation # 7
Writer: Jeff Lemire
Artist: Jeff Lemire & Renato Guides
Inker: not listed
Colorist: not listed
Letterer: Simon Bowland
Cover Artist: Jeff Lemire
Variant Covers: Raul Allen, Renato Guedes, David Lafuente with Gabe Eltaeb, Bob Layton with Gabe Eltaeb, and Ryan Bodenheim
Editors: Warren Simons Asst. Editor: Benjamin Peterson
Publisher: Valiant Comics
What You Need to Know:
Ray is reunited with Magic and Jessie, but his daughter is sick from the Nanites that have manifested in her body. They are slowly poisoning her, and they are resistant to any treatment on the earthly Plain. Having the idea to save Jessie, Ninjak suggests that they visit the Shadowman in New Orleans.

They arrive just in time, and Ray makes the hasty decision to enter the Dead-side portal with Jessie, and the Bloodhound too. Only one problem, Ray has become Blind as he passed through the portal, and all fades to Black! 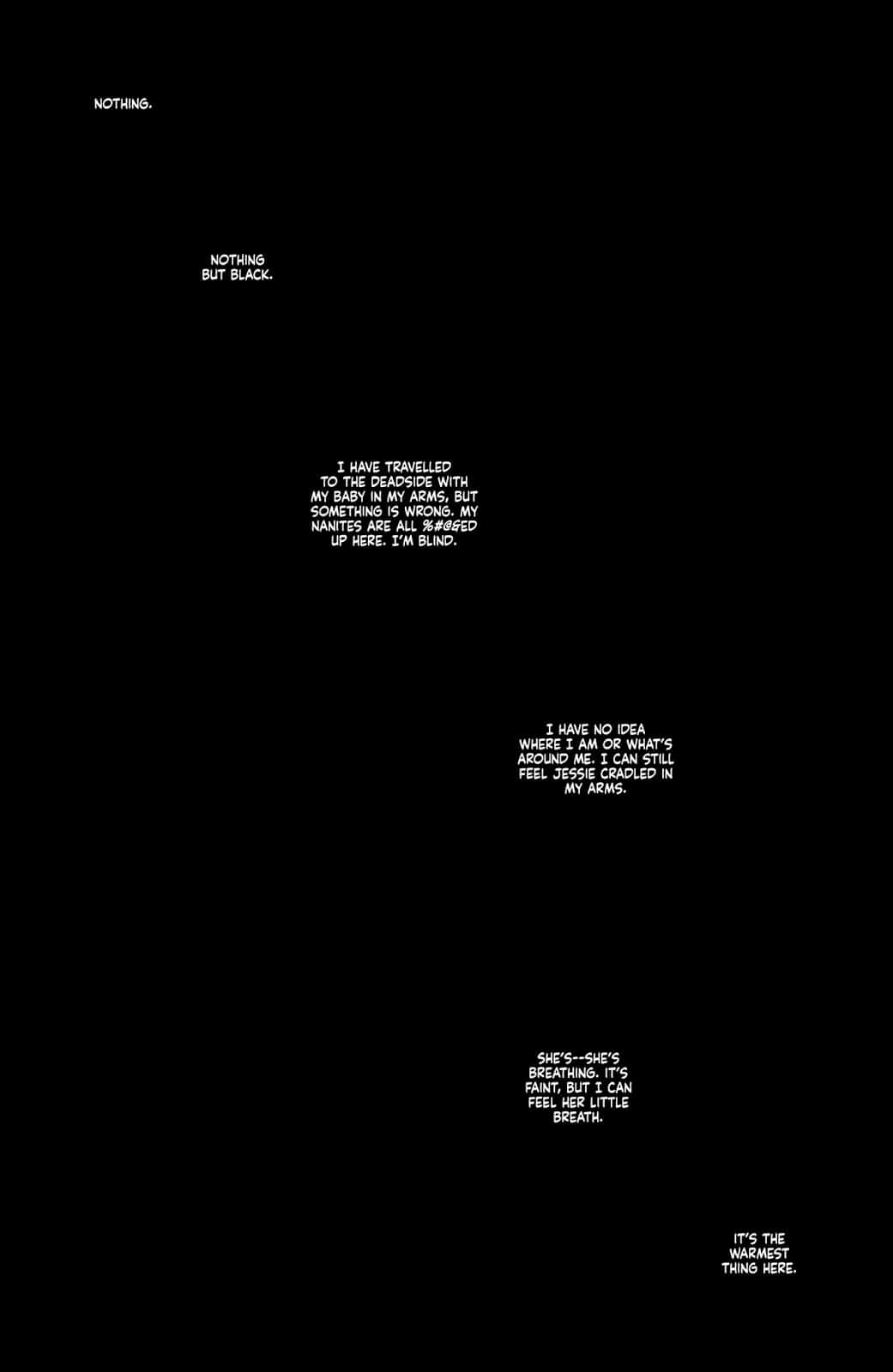 This is what the majority of the book looks like.

In abject Darkness, Ray tries to lead his ill daughter through the landscapes of the Deadside. With his trusty dog to guide him, he moves forward, in search of something to help poor Jessie.

What Just Happened?
Ray finds his way through the dark, and as we cannot see through his eyes ( since he is Blind) the pages have some abstract art and lots of explanation. The Letter is the true hero of this book!

We see the dialogue and the concern for his daughter as he falls into a body of water, unaware of the danger that lies in wait for him on the shore. He starts to form some pictures. 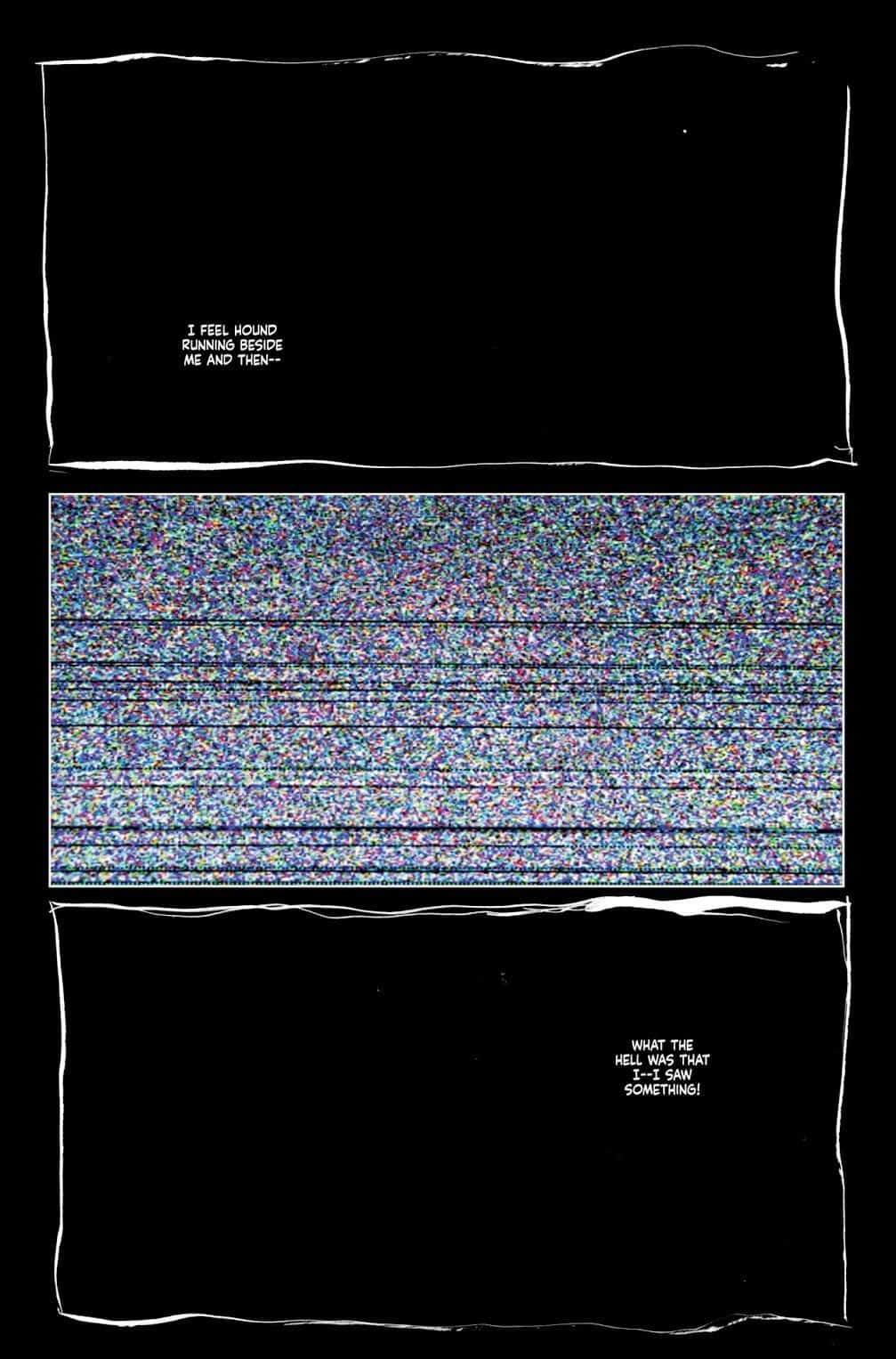 As Ray plan’s his next move his eyesight returns, and at an opportune time, but only slightly. We see a panel of the danger that traveling her has caused Ray and Jessie and the Bloodhound. Sounds like trouble.

In abject Darkness, Ray tries to lead his ill daughter through the landscapes of the Deadside. With his trusty dog to guide him, he moves forward, in search of something to help poor Jessie. 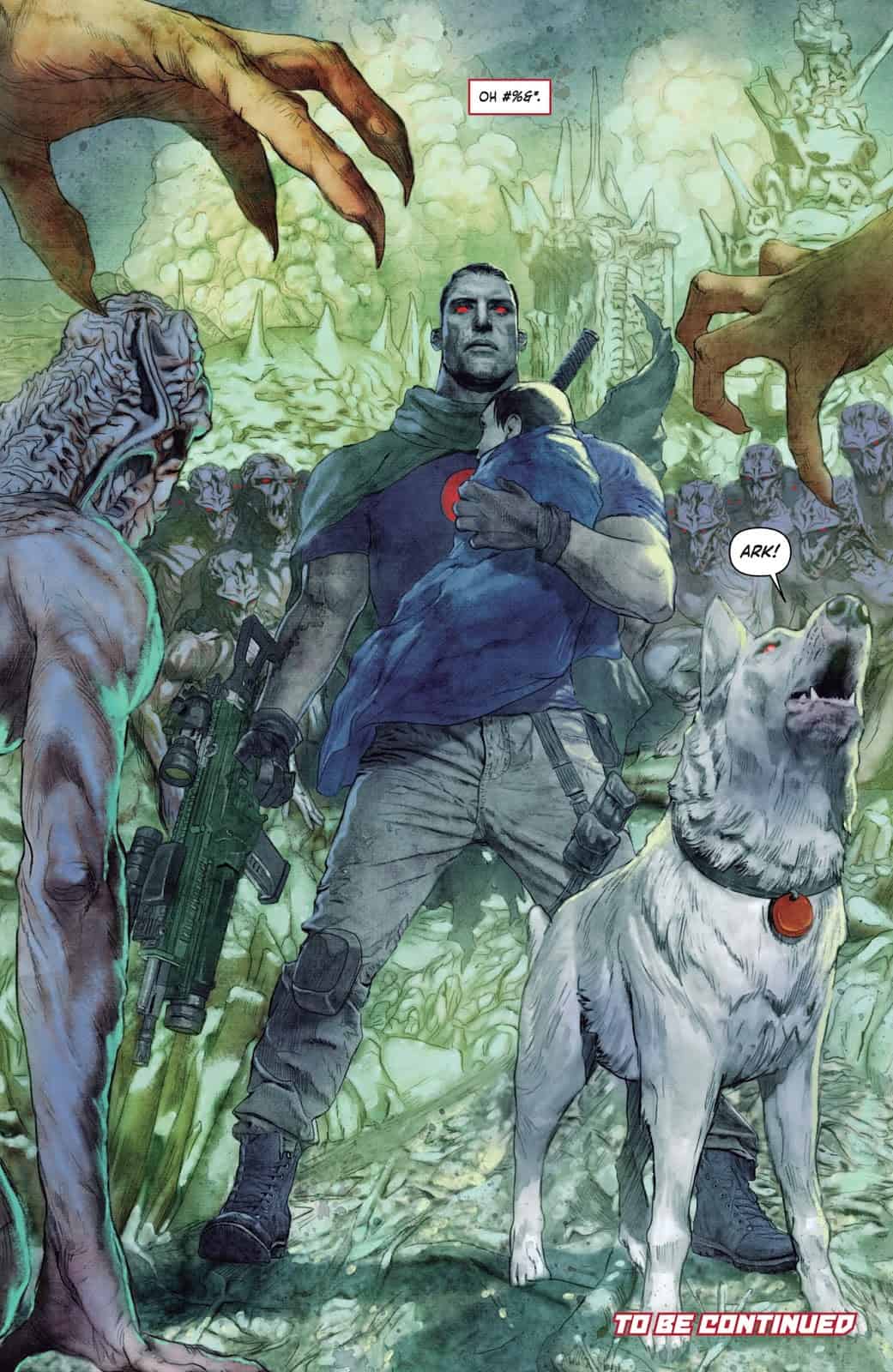 Rating: 10 / 10
Final Thought:
This is a new concept, with the darkness throughout the entire book. It really does no justice to post more of the pages, because it is best as an experience to read. I felt sorry for the characters when they failed, and this is something that has never before been attempted.

My suggestion is to pick up this book and experience it for yourself. It slows down the process and makes for a really cool narrative device. Jeff Lemire is to be congratulated for the daring and Bold way that he decided to tell this story, and he even did a bunch of the art himself, with a small amount of aid. This shows that Valiant Comics are looking for Fresh Ideas, and are well on their way to becoming some of the most original ideas in all of the Comics world.