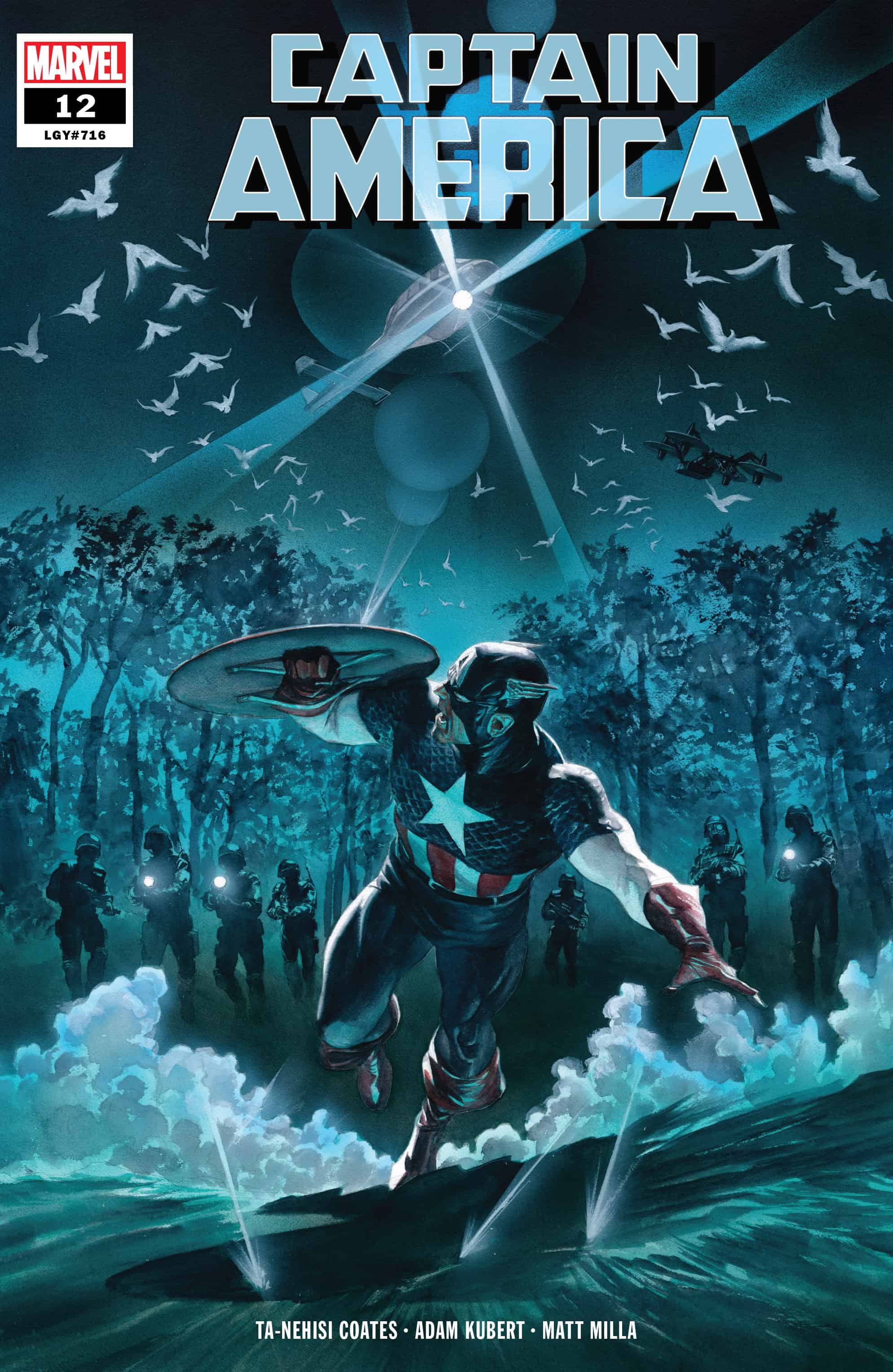 Fresh out of prison, Captain America is on a mission to tie up loose ends, yet the public and the government can only see as far as his rap sheet, causing Steve and Sharon to have to reimagine what Captain America means to the modern world at this juncture in time. 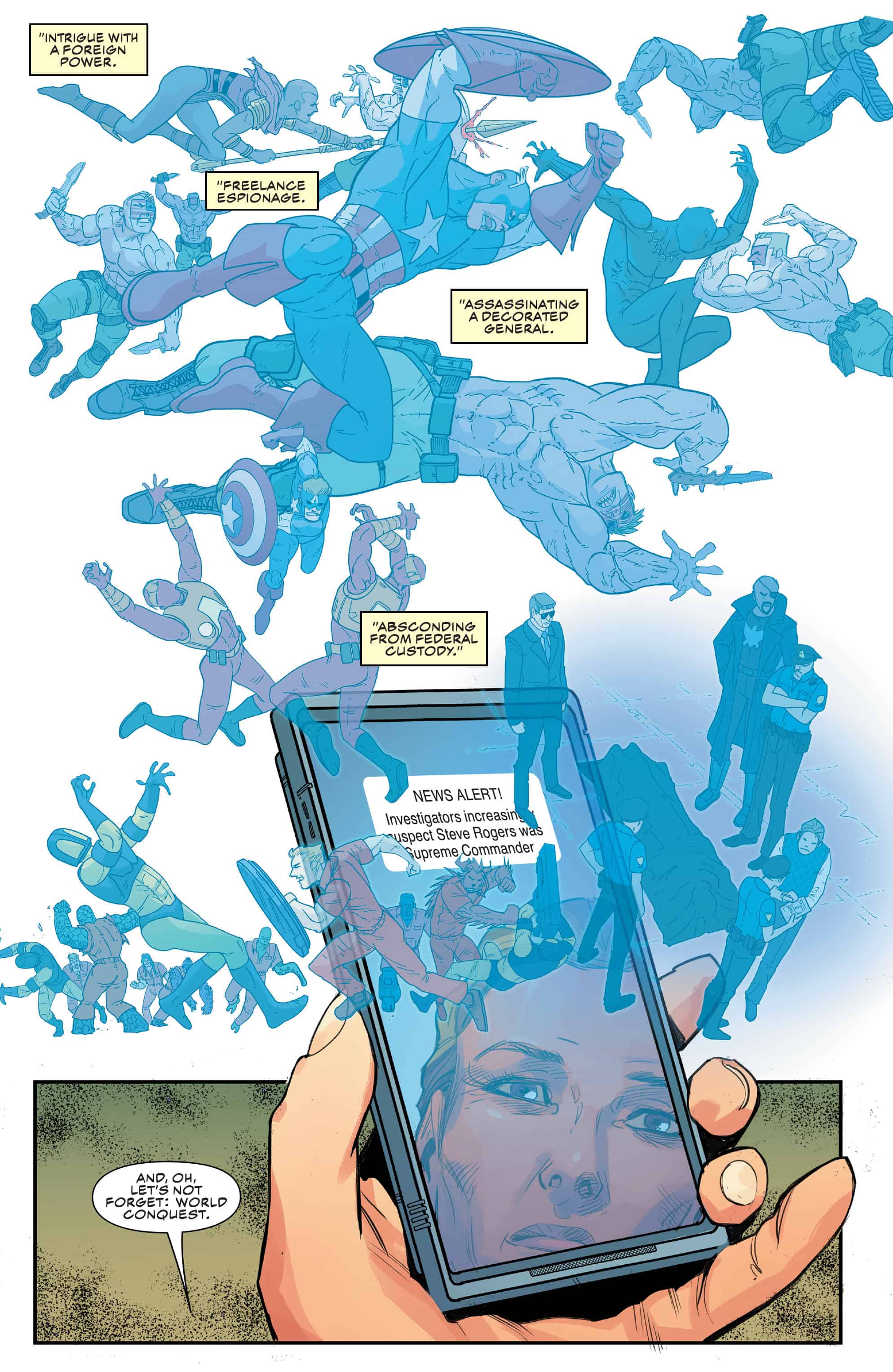 While Fury hunts Cap and Bucky and Dryad "interrogate" Zemo, Steve gathers the Daughters of Liberty to discuss a new way forward. Be here for the dawn of a new era for Steve Rogers and don't miss the one-page epilogue/prologue at the end! 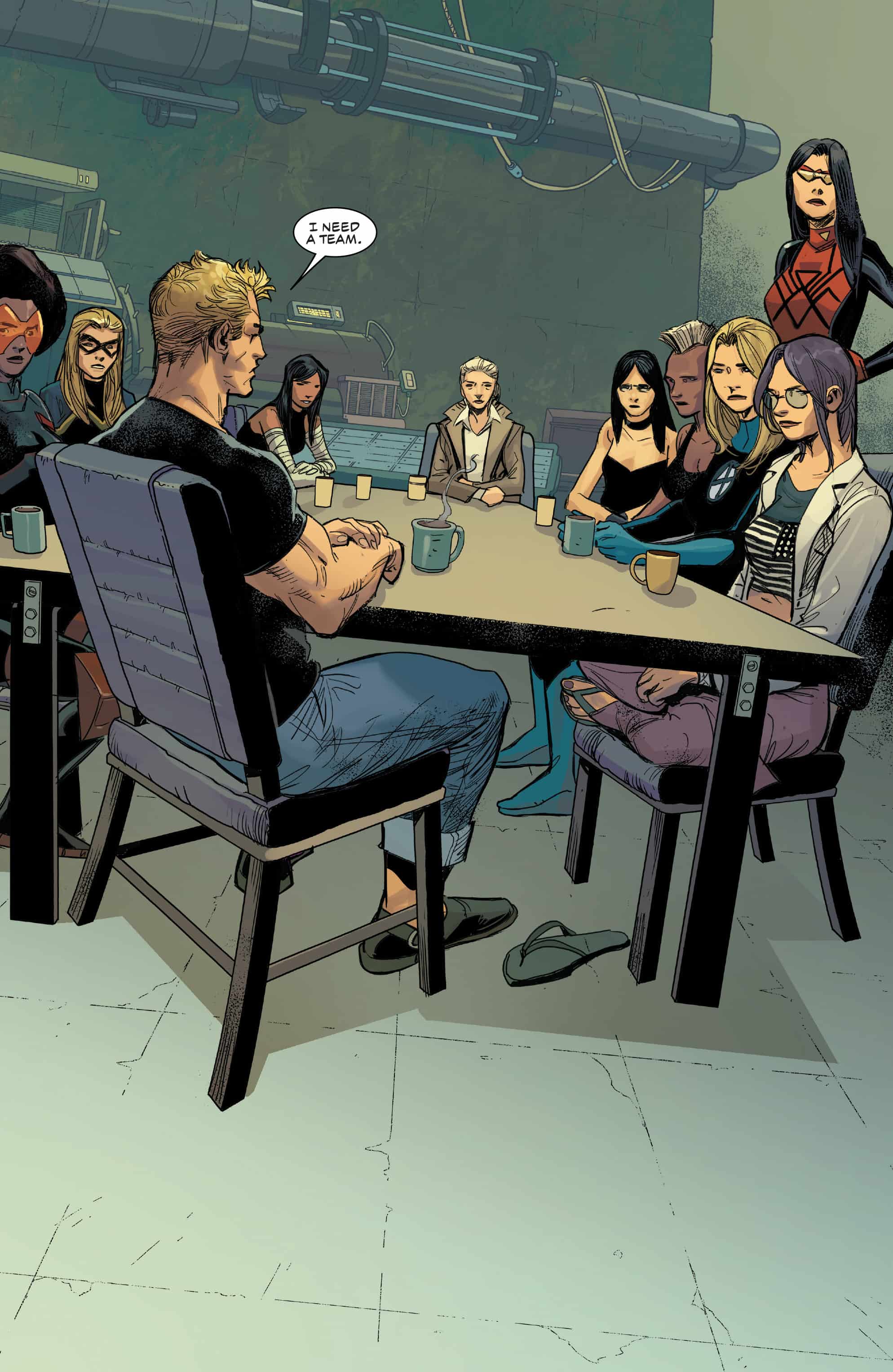 When Coates was announced as the upcoming writer for Captain America, it was made clear that the story would operate on the question of “what does it mean to be Captain America in the modern world?” After months of speculating, I can definitively say that, according to Coates’ narrative, it means death. That isn’t to say that America is dead, as was clearly elucidated by Susan Storm. The dream lives on. But how, in a nation divided against itself, can a single iconic figure stand to be representative of that same nation? That seems to be Coates’ statement here, although many will label him a traitor, maybe even telling him to “go back to where he came from”, further solidifying the point here. The notion of casting off the Captain America moniker gives Steve Rogers the freedom to represent himself and adding him to a team of other heroes fighting for their vision of the American Dream enables a richness of representation that, again, a single icon cannot express. 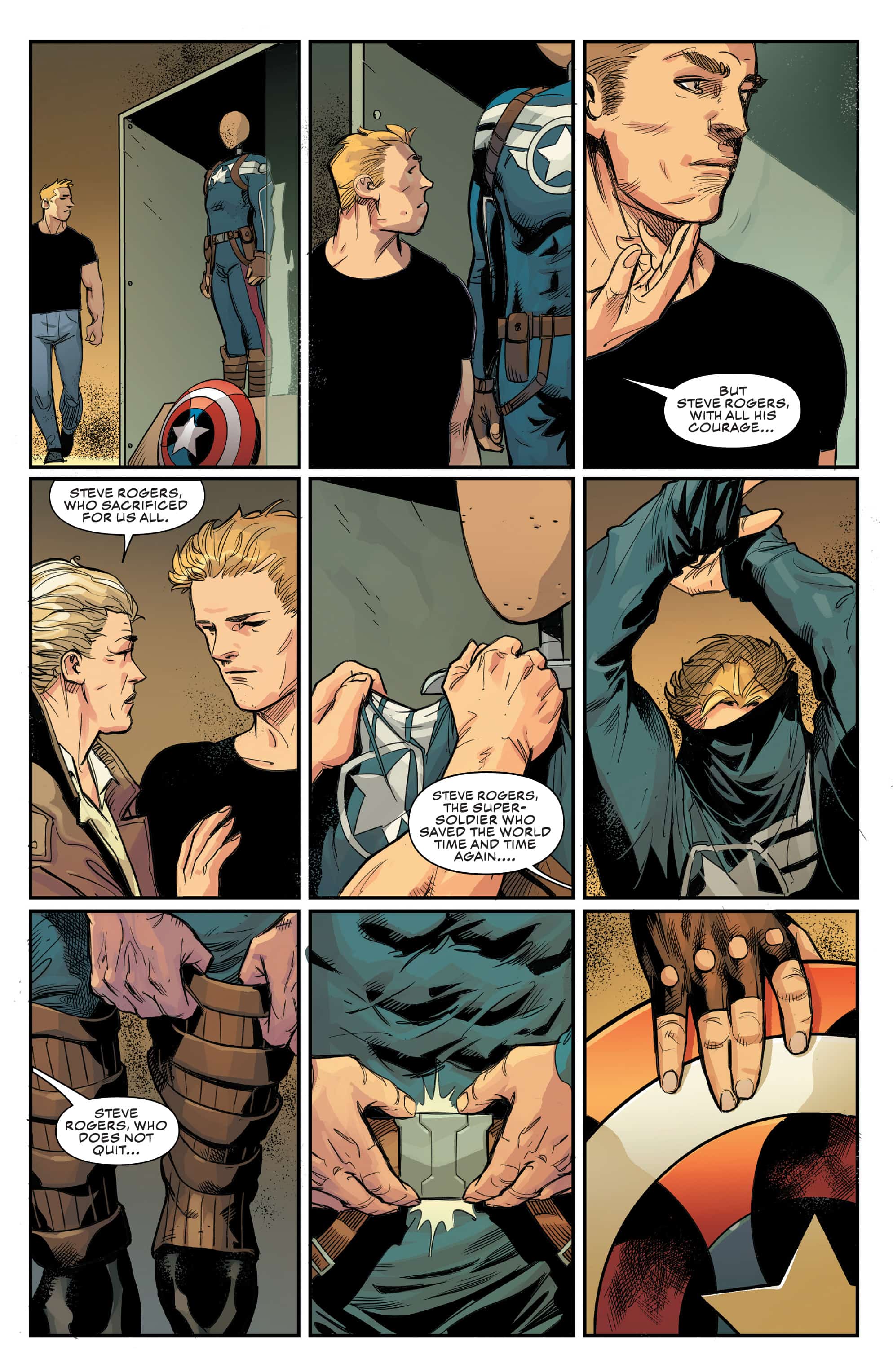 There are many reasons we find ourselves a nation divided and Coates takes care to not single any particular one out as the cause, making this series, so highly charged in political ideology, somehow apolitical– a testament to the strength of the writer. But while Coates’ writing illustrates the national divide, so too does the artwork throughout this issue. Kubert is a legend in the industry and for good reason, yet there seems to be two distinct modes in operation within this single issue that clash dramatically with each other. The first half of the book is rough, as though hastily done in order to get to the meat of the story featured in the second half, which was much cleaner. The transition between the two styles of Kubert’s art was jarring to say to the least. 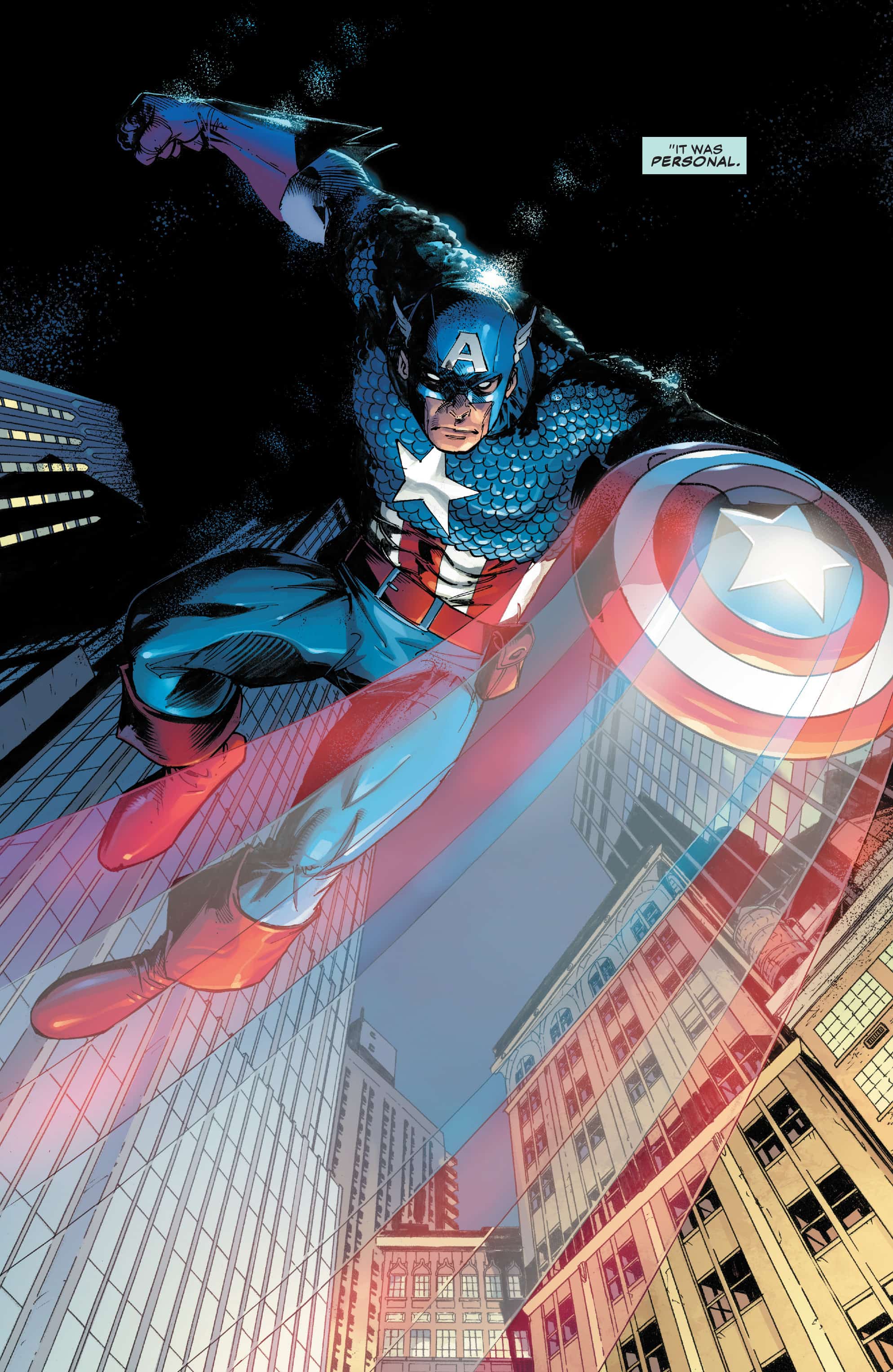 It is entirely possible that this artistic shift was intentional as a new era was ushered in and we join him for that transition but in my opinion, it simply didn’t quite work out. Perhaps if the shift was more gradual? As it stands, though, even the uneven artwork here is not enough to deface the narrative power of this issue.

The end of an era is upon us as Steve Rogers is forced to take on a different role in this new, 21st century America in Captain America #12.