REVIEW: Daredevil #599 (The Disaster Artist or Mayor May-not be in Control) 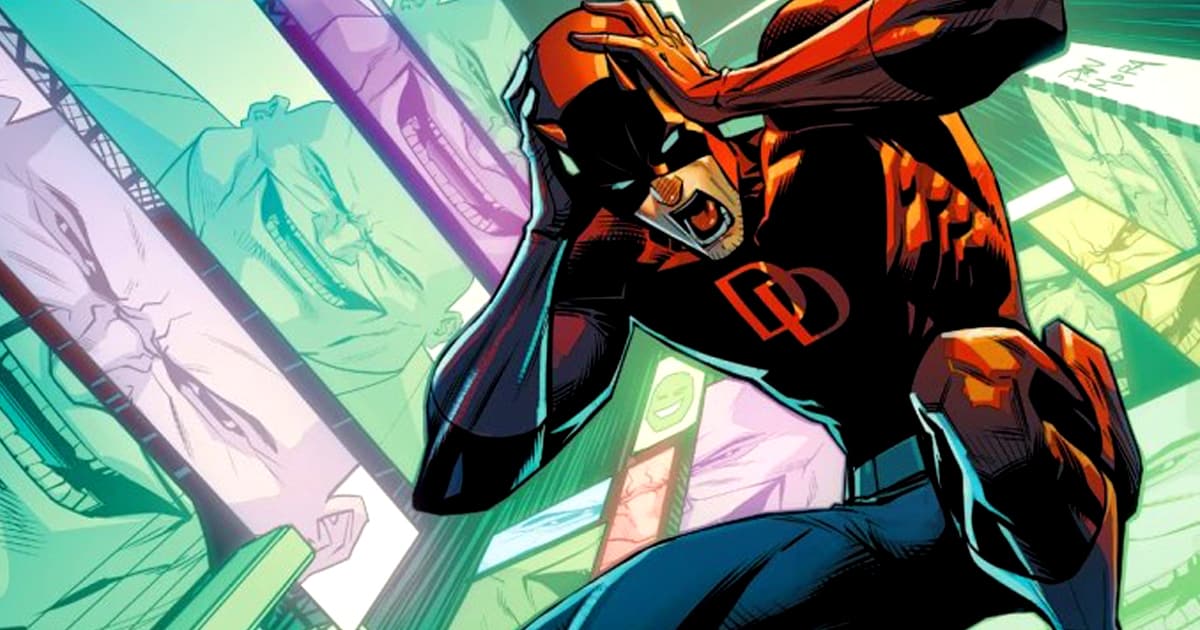 The city is in the grip of Terror from the Muse, A performance artist/ Serial Killer. His latest Tableau, six Police officers murdered underneath a Painting of the Punisher. Daredevil struggles to find his Muse and focus on anything but Wilson Fisk. 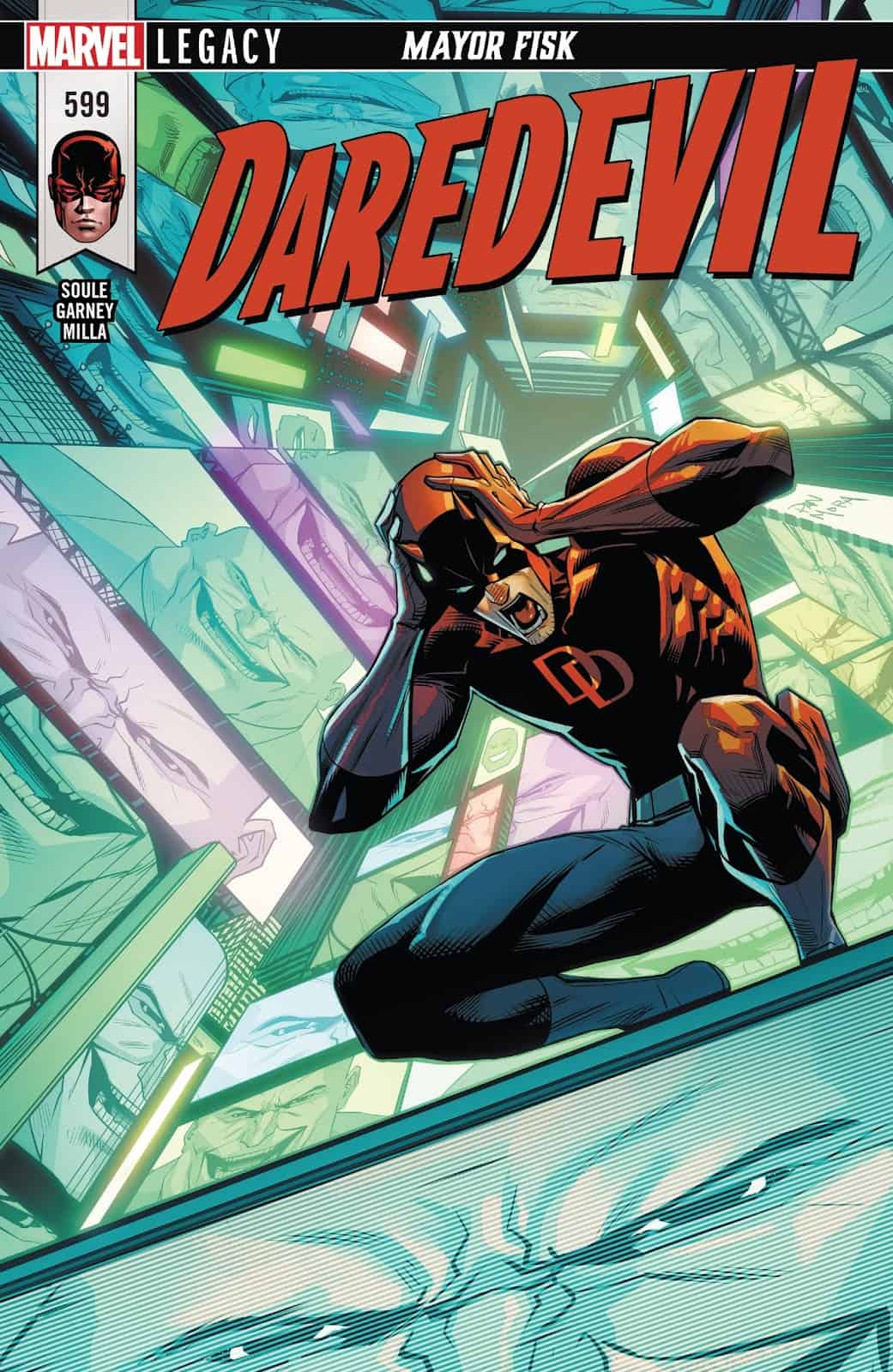 What You Need to Know:
Daredevil, sporting his new stealthy costume, tries to locate The Muse using his meditative techniques to single out Dead spots in the city. This is how he located the Muse before. 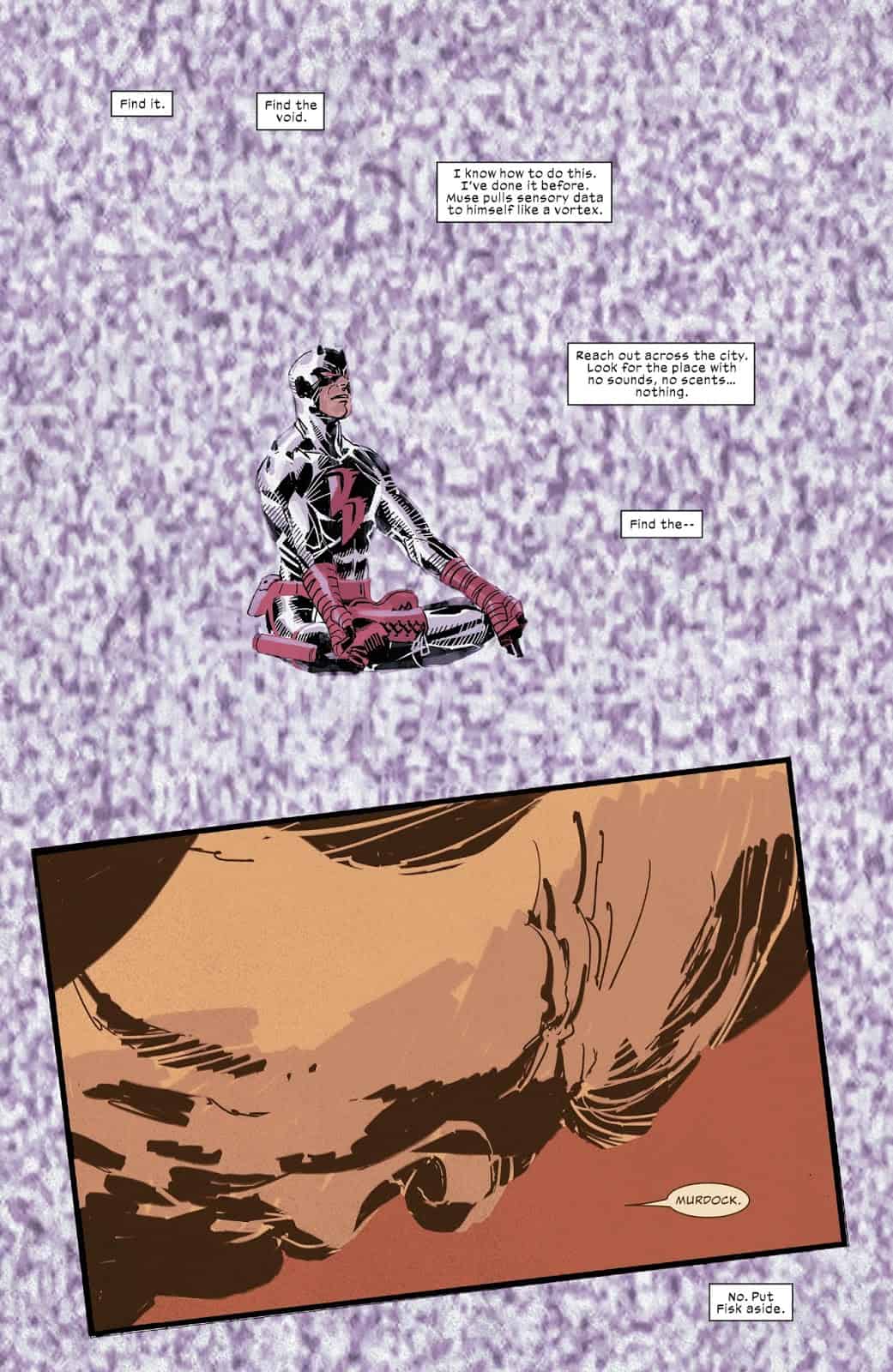 Fisk is in Murdock’s Head too much to focus on Muse.

The problem is that everything he hears is about the Mayor Wilson Fisk, and how he framed the Punisher for the murder of six police officers. Fisk has found a way to spin these events to his advantage. Matt cannot locate Muse, because his head is so full of Wilson Fisk, and he attempts four times with the same failure.

As Blindspot has more reason than most to find the Muse and stop him, Daredevil and he talk about how they will find him. Matt’s Plan is to gather up the remaining heroes to seek out and capture Must. Sam (Blindspot) wants revenge, and to make sure that he never kills again. He is not interested in Daredevil’s or Matt help, and he goes off to find Muse on his own.

What You’ll Find Out:
Kingpin is planning something big for the city.  Matt bursts into his office to continue that conversation where he warned Fisk that there would be more killing. He pleads with The Mayor to work with the local Super Hero community and to work to find Must Together. Fisk disagrees once more but issues Matt an ultimatum. Appear at the Rally in Central Park this evening beside the Mayor, or quit, but with a harsh threat, to end his career. 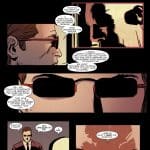 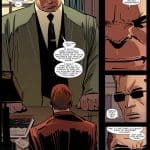 Matt knows that his hands are tied, and agrees to be there and to make it look good.

Sam in his hideout in Chinatown prepares to locate the Muse. His sister Hannah sneaks up on him and she is surprised to see him, and that he has eyes once more. Sam tells her that their Mother did something to get my eyes back ( See Daredevil #597) and that she is still in China. He did not mention that she was killed by a demon. Sam says that he is not the same since he went to China, that he is a killer now, just like the Muse. He prepares some specialty Paint for his assault on the Muse’s Artwork, but he says a goodbye to his sister as if he knows he would not be coming back. 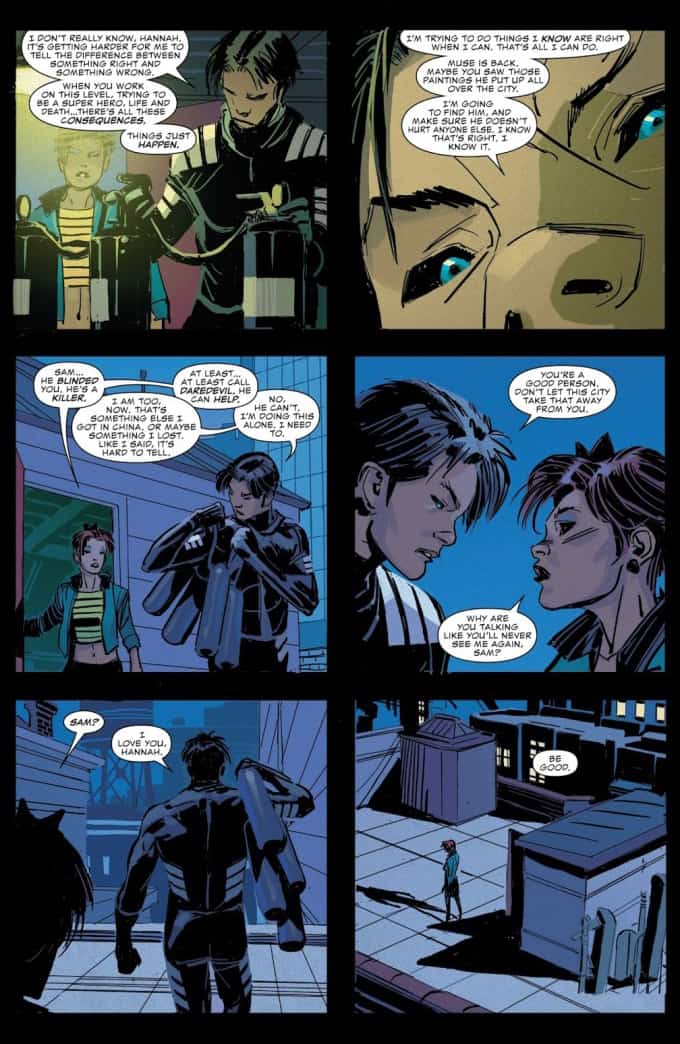 What Just Happened?
Meanwhile, The Mayor prepares for the Rally and tells Wesley to prepare for Project Sarnos to commence as well. He asks Wesley to remove the portrait of Daredevil from the Municipal Building facing his office, but to his shock, someone has defaced it first. 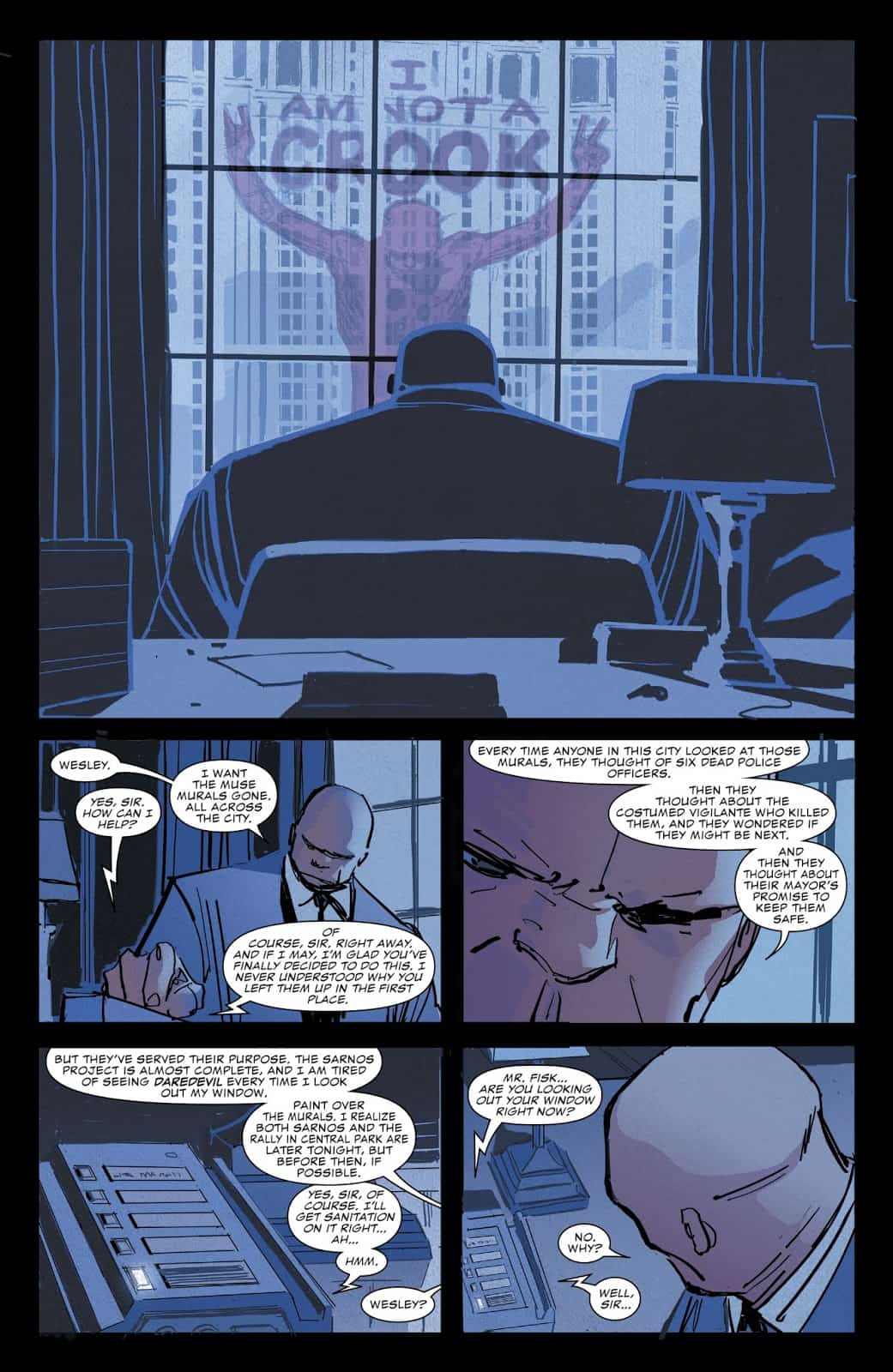 Blindspot tries to lure the Muse out of hiding. “Alright Muse comes and Get me,” says Sam.

A startling “All Right” from behind as he is shoved off the roof by the Muse with a casual gesture. 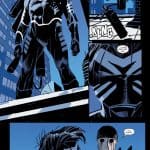 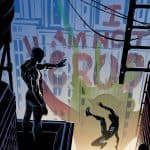 Daredevil, now back in his Red Costume, makes his way to a Rooftop meeting of his Street Level allies. Luke Cage, Spider-Man, Iron Fist, Echo, Moon Knight, Jessica Jones and Misty Knight! He has a plan to take down Kingpin but needs their help. 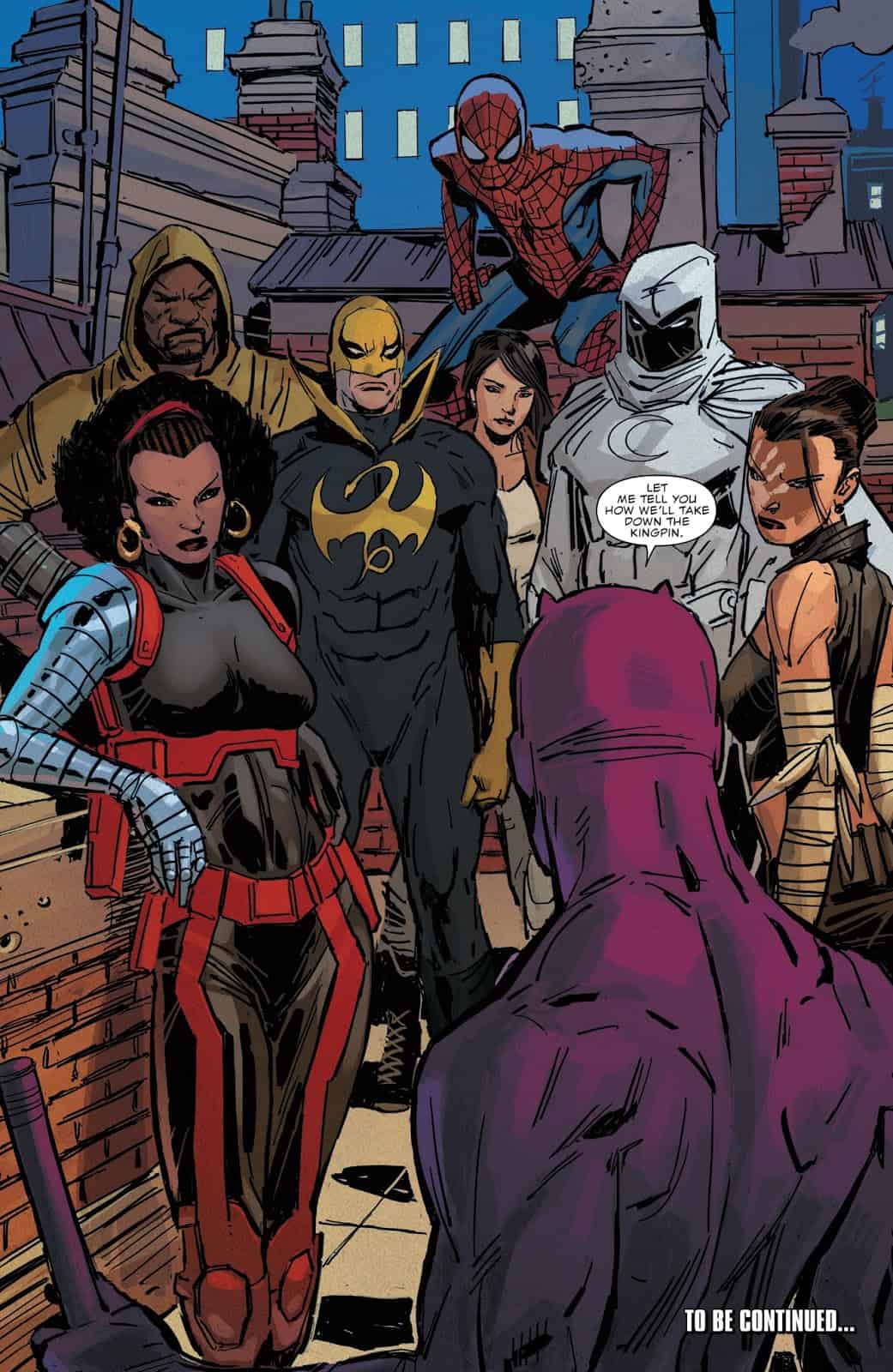 Rating: 9 / 10
Final Thought:
Things seem to be coming to a head with the heroes of NY City. As they prepare to battle both Wilson Fisk and the Muse, Daredevil prepares to take down the most powerful man in the world’s largest City!

I love the notion that Matt Murdock, just simply cannot get Fisk out of his head. Such a power he has over Daredevil and Matt combined.

We get a glimpse from Wilson and Wesley that the Rally in Central Park may be key to Sarnos, and the heroes come together to aid Matt. Muse is a frightening creature, and as I am sure that Blindspot will survive his fall, it was terrifying that he showed up just behind him. Congrats to Soule and Garney for making this character. He seems to be a calm, psychotic who moves with a cool confidence and certainty. From the beginning when he escaped New Attilan, until his last panel, The Muse is not to be trifled with, and Mayor Fisk may soon find that out.