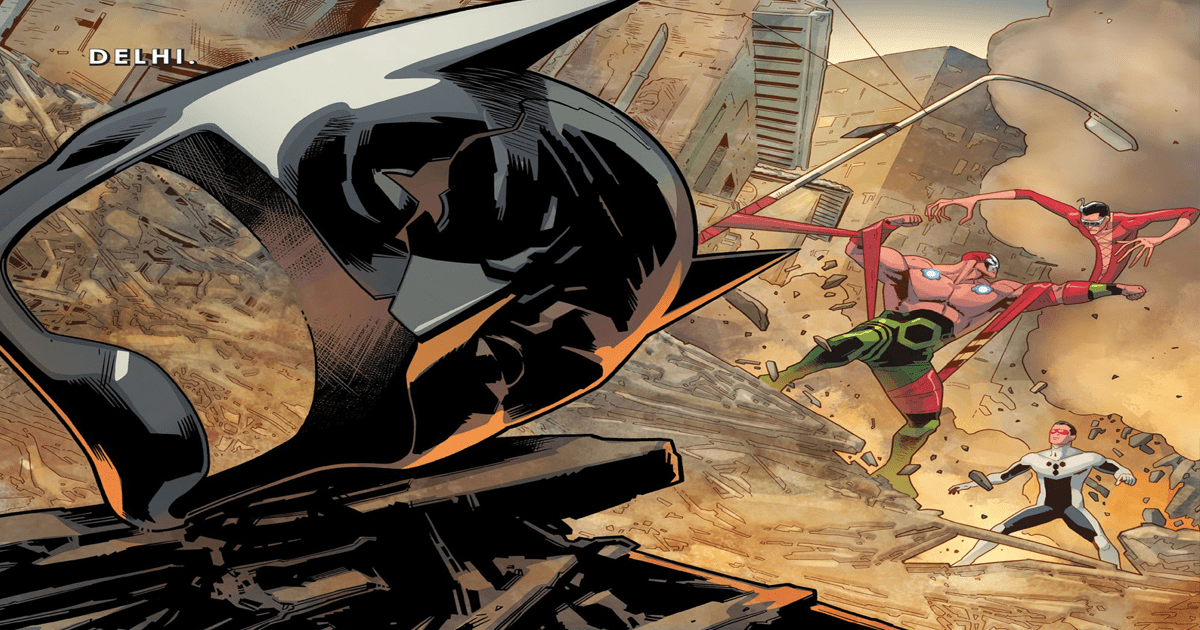 With Atom’s fate unclear, the heroes are left at the mercy of AMAZO. But while they struggle, Robin and his new ally Jason Todd put their own plans into motion… 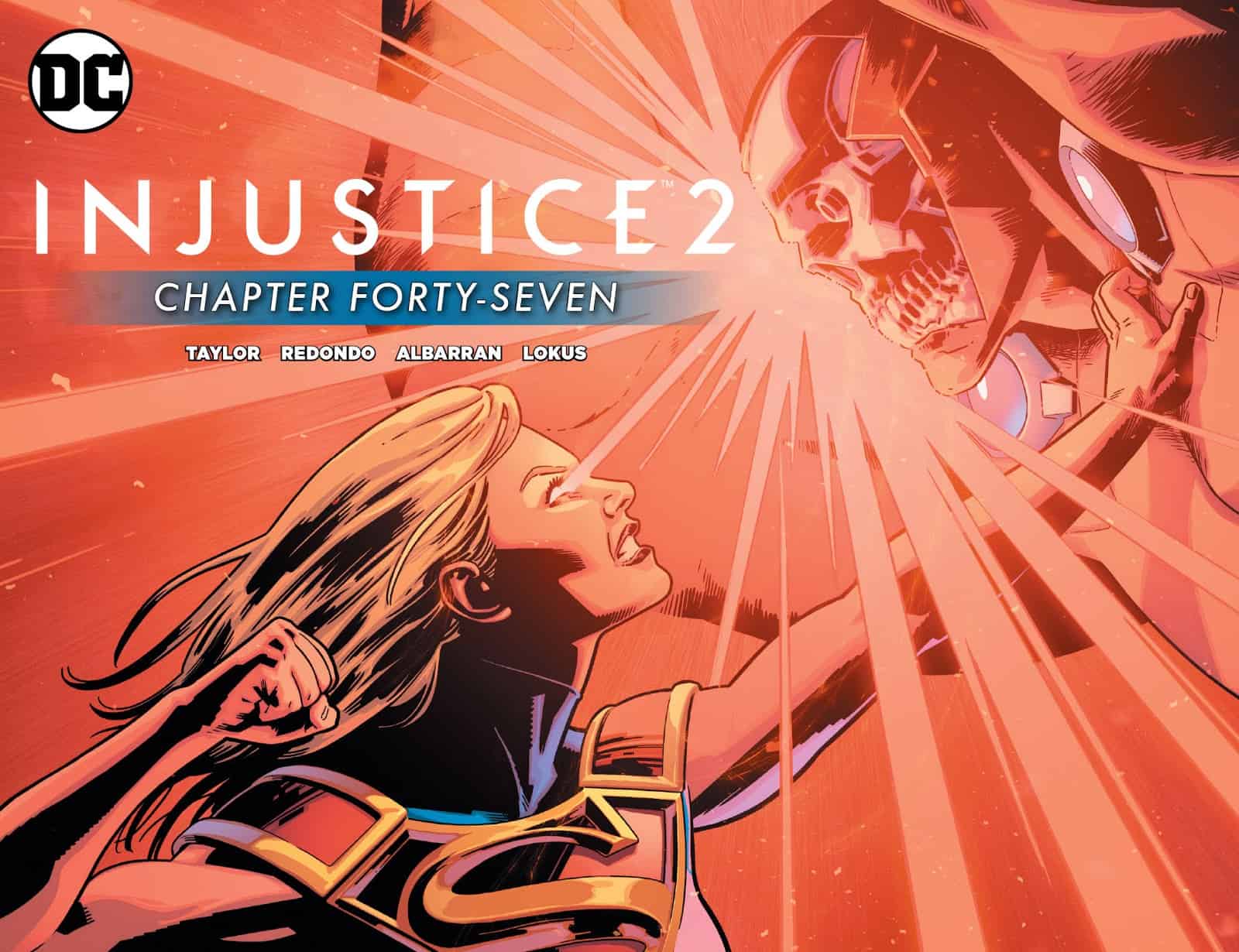 What You Need to Know:
Despite the efforts of both Batman’s allies, Wonder Woman, & Black Adam, AMAZO remains seemingly invincible. The Atom (Ray Palmer) has slipped inside him to find a weakness and discovered the android is in-fact repurposed alien technology. Unfortunately, he loses a leg as nanites within AMAZO attacks him. Forcing those fighting AMAZO back to square one…

What You’ll Find Out:
The battle against AMAZO rages on with Batman being knocked unconscious between Chapters 46 and 47. Harley wants to get Batman to safety but Black Canary just brings up that Batman wouldn’t want them to abandon the fight because of him. But Harley insists that they retreat with Batman so that they can remain safe for their child. Back in Gorilla City, Animal Man arrives in the form of a somewhat creepy and offputting caterpillar man from beneath Dr. Ivos lab. Followed close behind by Vixen, Robin (Damian Wayne), & Jason Todd who admits having Animal Man come out first was probably not the best idea. Dr. Ivo begs them to leave because Ra’s has his family captive and has been sending him pieces of them so that he’d keep working on AMAZO. He’s worried for their safety with the heroes arrival but Jason Todd breaks the unfortunate news to him that they’re all already dead. That they were in-fact dead since their initial capture. Dr. Ivo is overcome with grief but Jason Todd has no time for his sorrow and orders him to retake control of AMAZO. 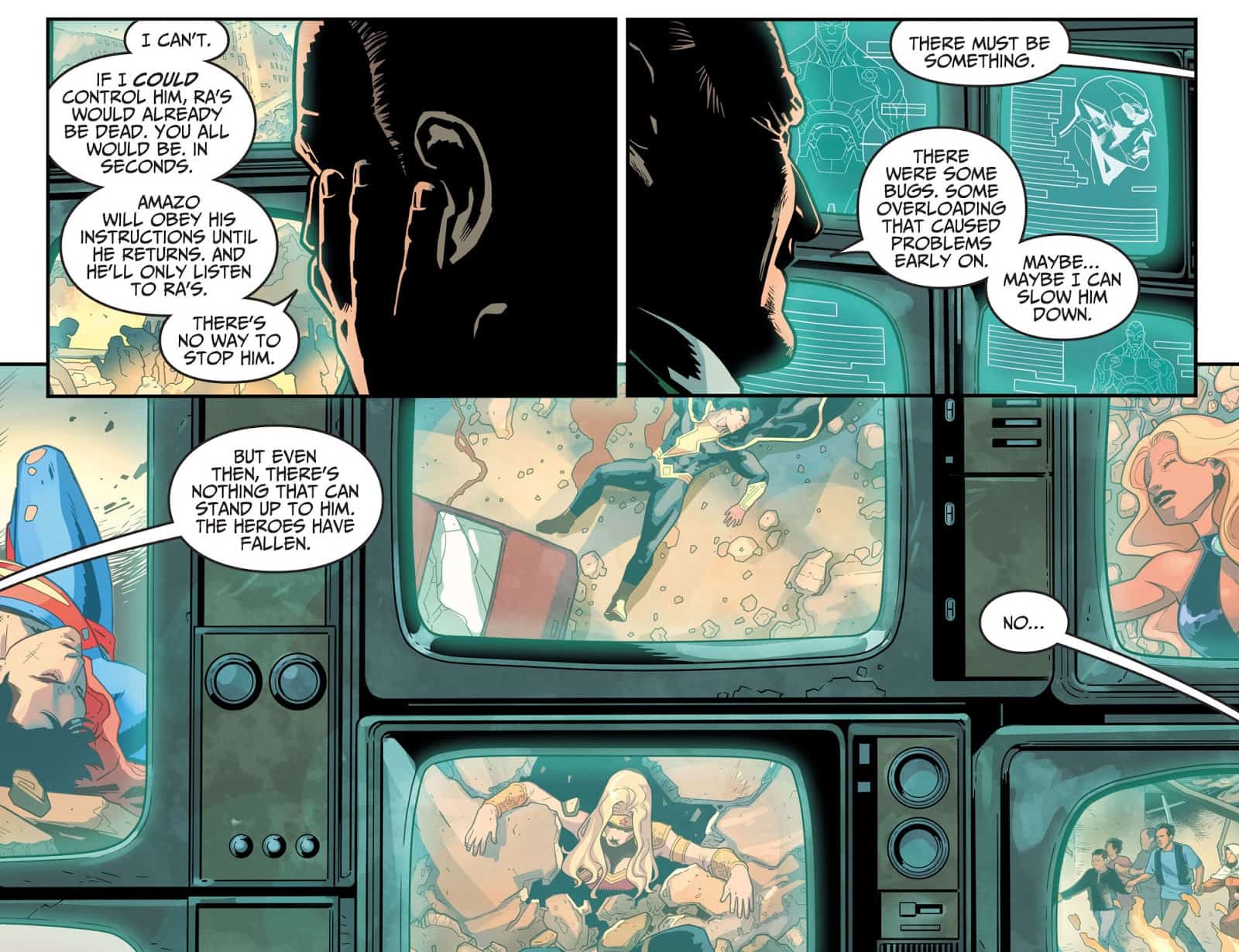 Unfortunately, AMAZO only listens to Ra’s. Worse still, all Dr. Ivo can do is slow the android down. A fact he finds pointless with no heroes left standing. That is everyone but Supergirl who Robin calls. He tells her they have a plan that could slow AMAZO down. With Wonder Woman being the only opposition left for AMAZO, they need Supergirl to help buy time. Supergirl prepares to leave but is confronted by Antiope & Philippus. Surprisingly, both are supportive of her departure and offer no opposition. Back at the fight with AMAZO, Plastic Man suffers a heat vision blast through his stretched body to Lukes dismay. Wonder Woman manages to lodge her sword in AMAZO’s side but he just grabs her and blasts through Luke like his father. But before AMAZO can finish the Amazon, Booster Gold & Blue Beetle arrive to aid their battle. 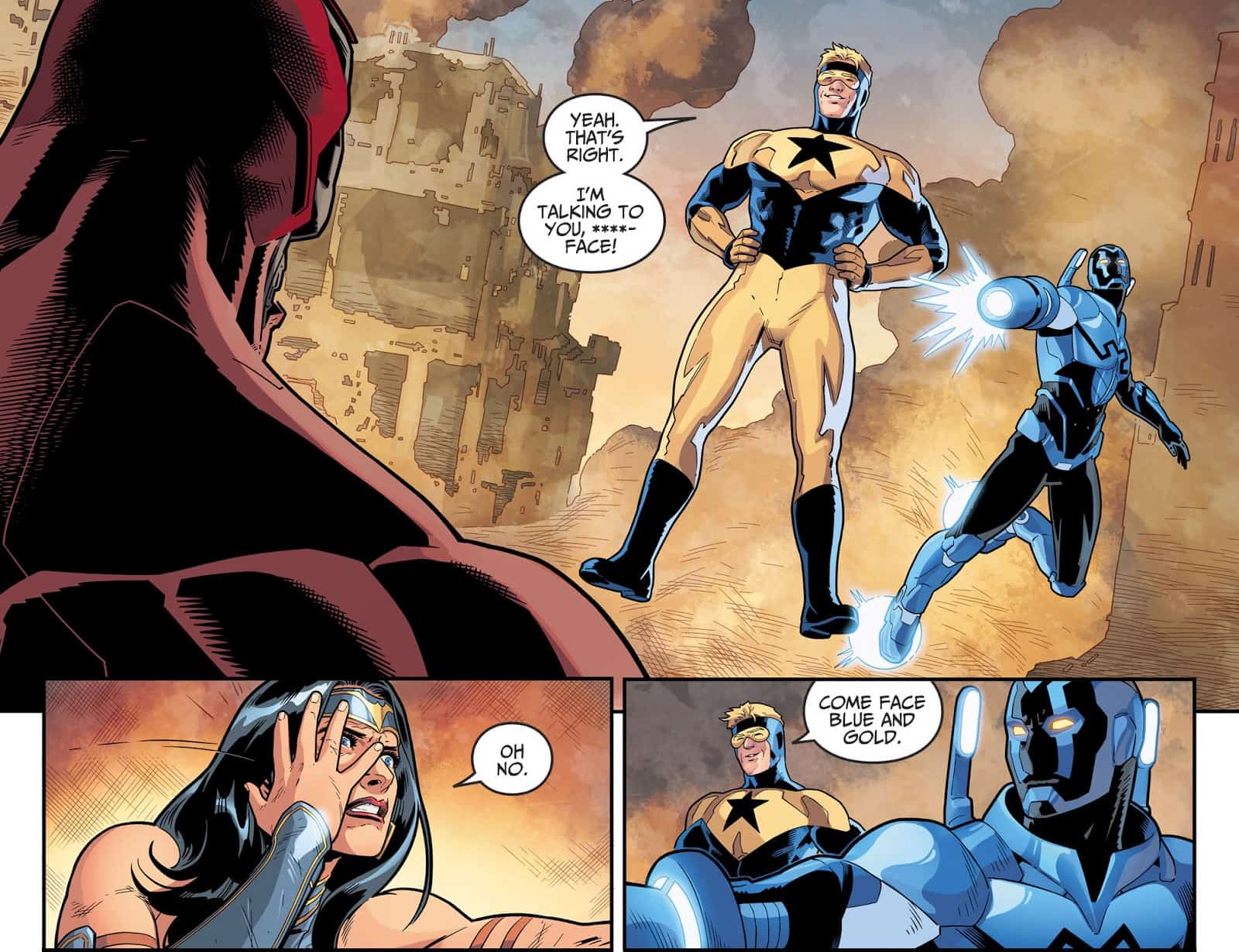 Booster gets blasted away in seconds leaving Blue Bettle to lead the charge. But before he can make contact, AMAZO disappears. Supergirl has swooped in and taken AMAZO into the skies. Robin tells her to keep AMAZO from civilians but she can’t hear him as they’ve already hit space. She continues without stopping until she finally crashes with him into the moon’s surface. 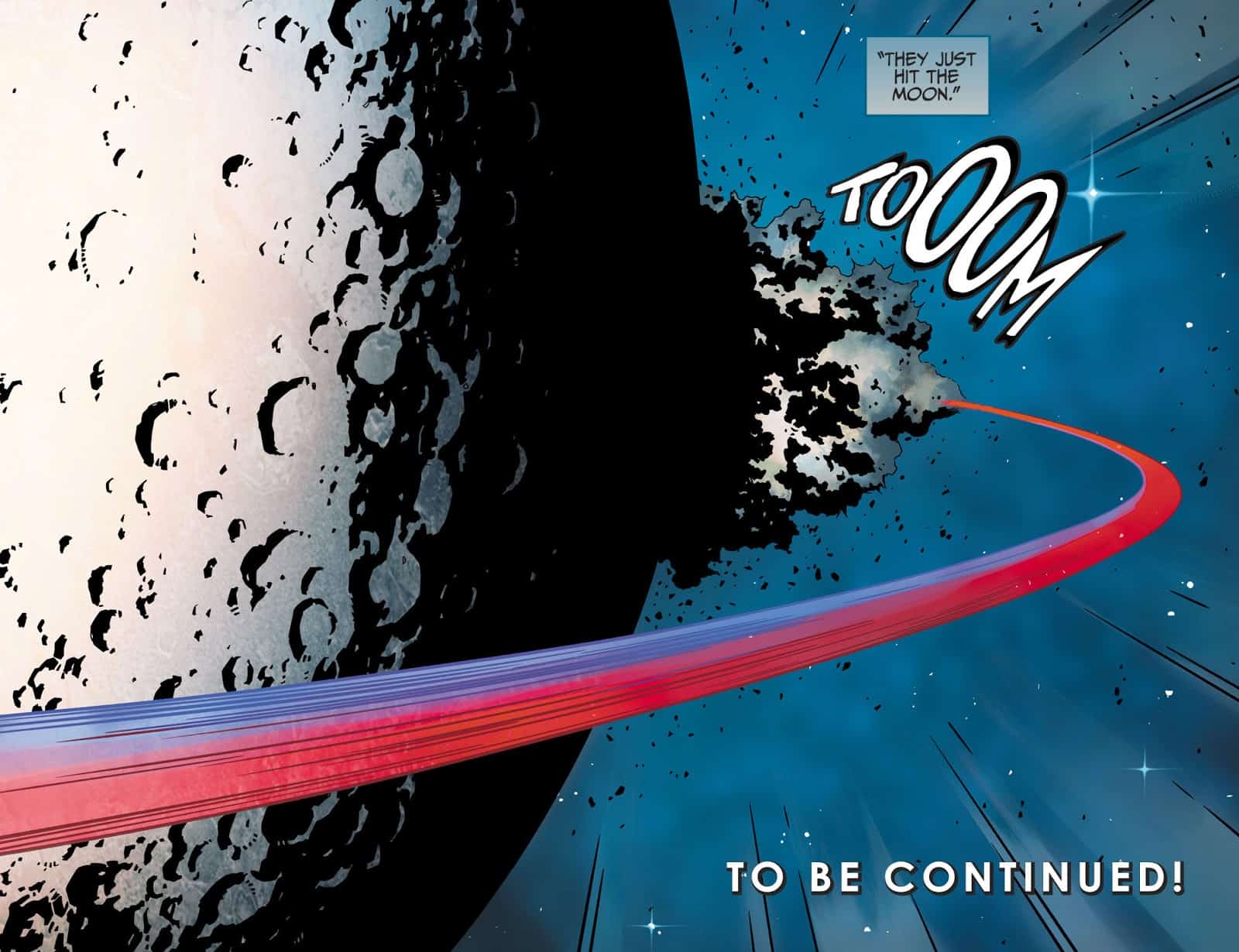 What Just Happened?
The one-sided beatdown at the hand of AMAZO continues but now we finally have an end in sight. I do enjoy seeing the two sides working together to take down an insanely powerful threat, but it’s a bit mixed in execution. I like that there are some implied time gaps between the chapters instead of just the panels. It gives a sense of how intense their fight is. But that does also leave it a bit ambiguous how long they have actually been fighting.  The fact both sides work without hesitation or focusing on the past disputes is a welcome touch as well. Actually building up Supergirl in the past chapters made her sudden sideswiping of AMAZO (on top of both Zod & Superboy being weakened for different reasons) believable. But now that she’s on her own we can only imagine how well this fight will go for her. Though harkening back to the concern about time gaps between chapters, last we saw Atom he lost his leg and was at the mercy of nanites. Did he already die, manage to escape, or is he an unwitting victim of not AMAZO but Supergirl dragging him into space?

Final Thought: Booster Gold is the true MVP of this chapter. We need more of him in Injustice.