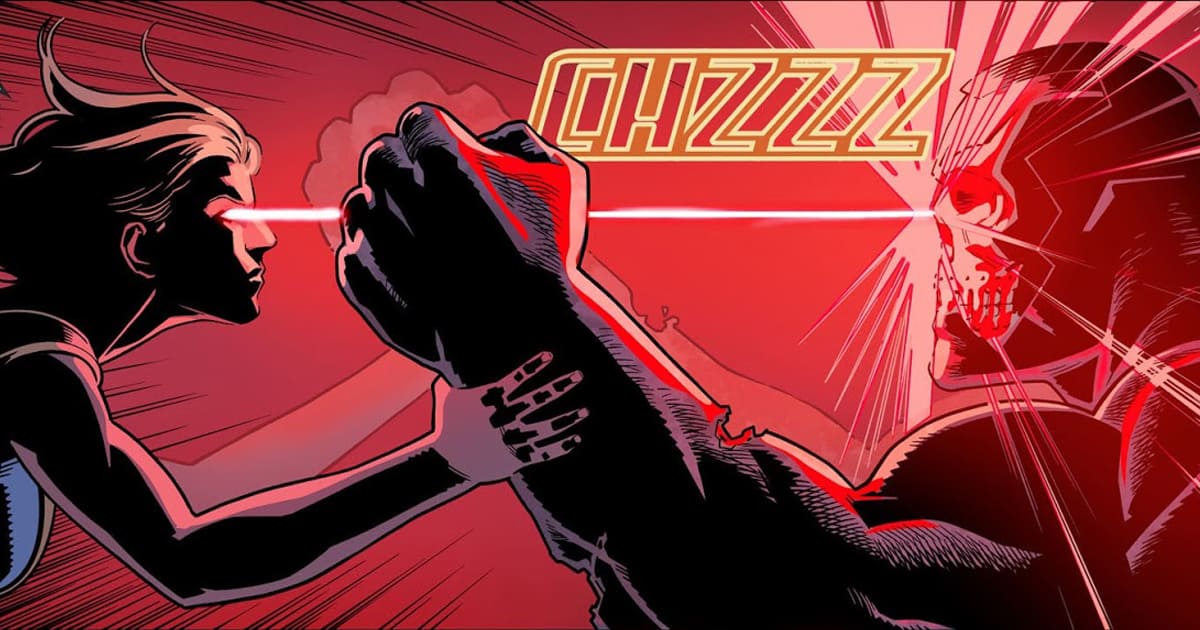 Supergirl vs AMAZO! Can the up-and-coming young Kryptonian do what everyone else has failed to do? 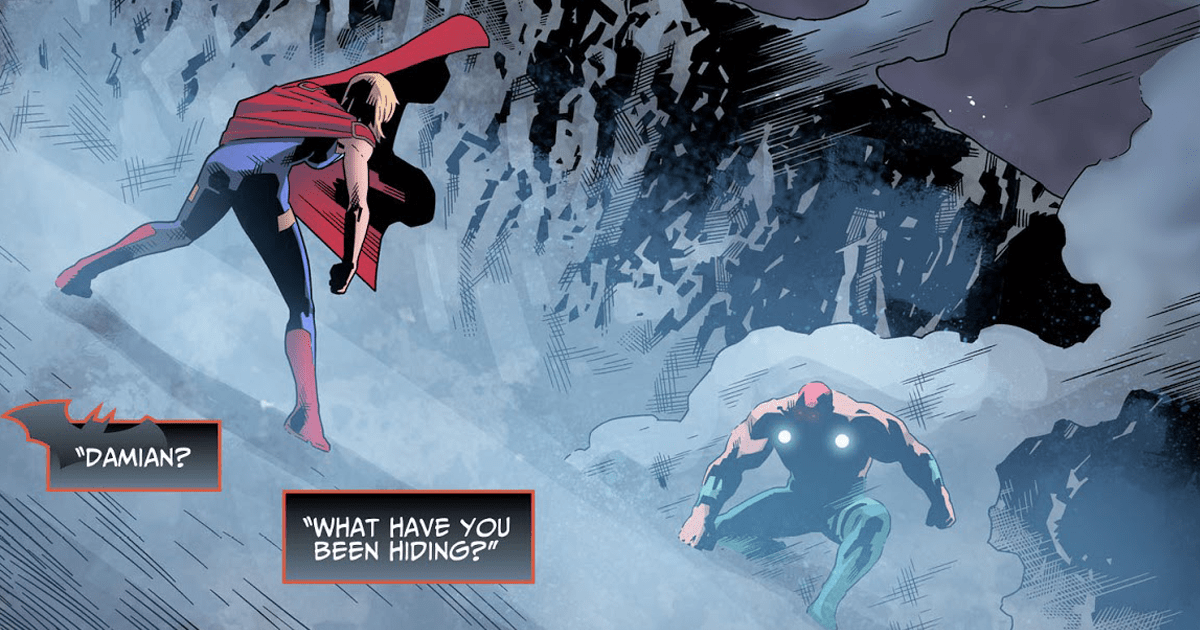 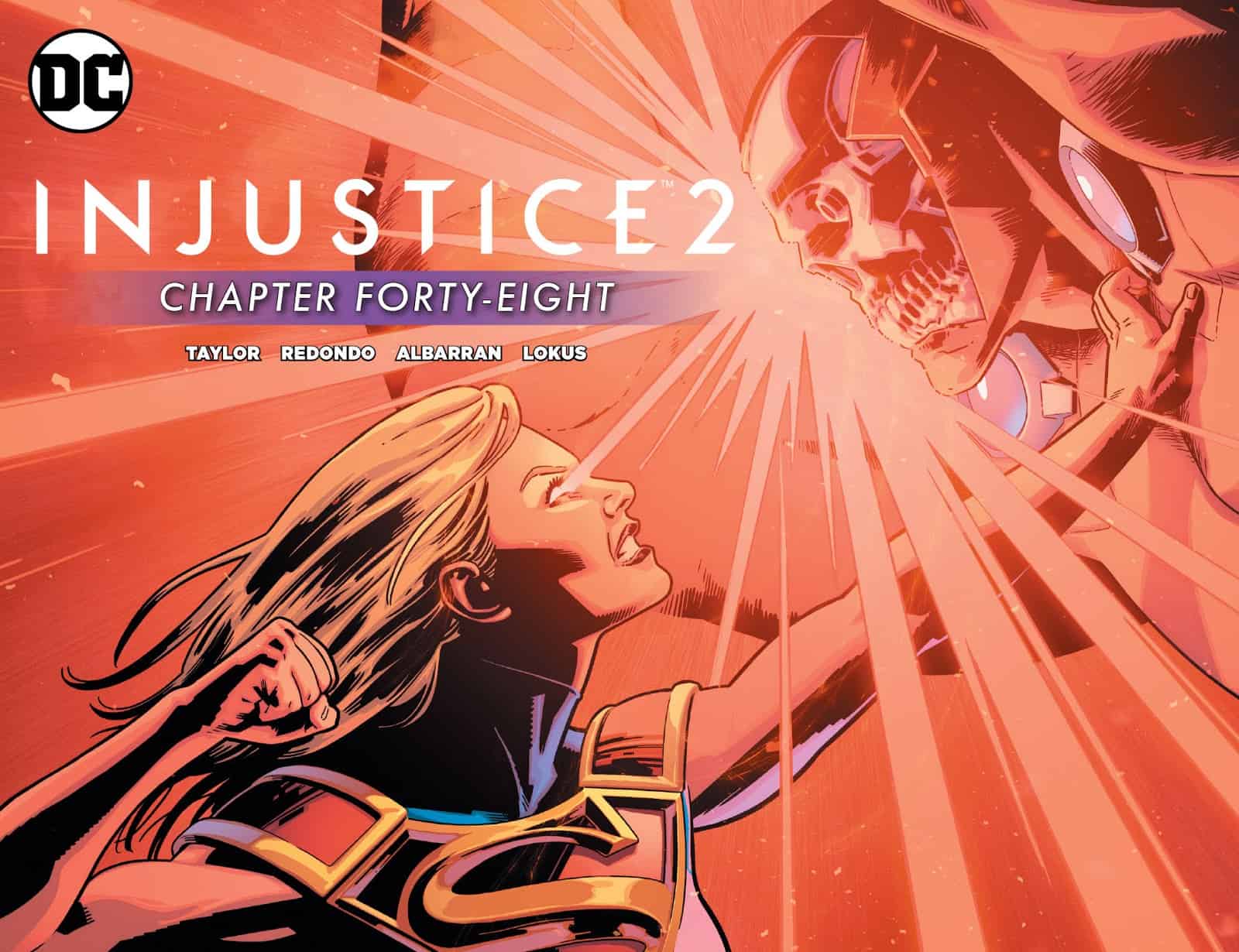 What You Need to Know:
The battle with AMAZO reaches a turning point as Damian Wayne (Robin) and his allies convince Dr. Ivo to help them take down the android. But the process will take time, leaving it up to Supergirl to stall him. To accomplish this, she flies him to the moon…

What You’ll Find Out:
The chapter opens with a brief scene confirming that while Plastic Man & Luke got lasered horribly by AMAZO, they are in fact, both still alive. However, they won’t be rejoining the fight anytime soon. Black Canary & Green Arrow ask Wonder Woman what happened to AMAZO. She wasn’t able to see anything but Blue Bettle confirms it was a person who took him. Someone faster than his suit could even scan. But he’s still capable of tracking AMAZO and flies off to do just that. Elsewhere, Damian and his team watch the fight as Dr. Ivo shuts off Ra’s feed to AMAZO. Leaving them unaware of what’s happening on the battlefield. The team prepares to defend themselves while Damian updates Supergirl. Telling her to stall and keep AMAZO at arm’s length but also still keep him stuck on the moon. Unfortunately for Supergirl, AMAZO easily withstands her heat vision and grabs her from behind much like it did Zod before decapitating him. 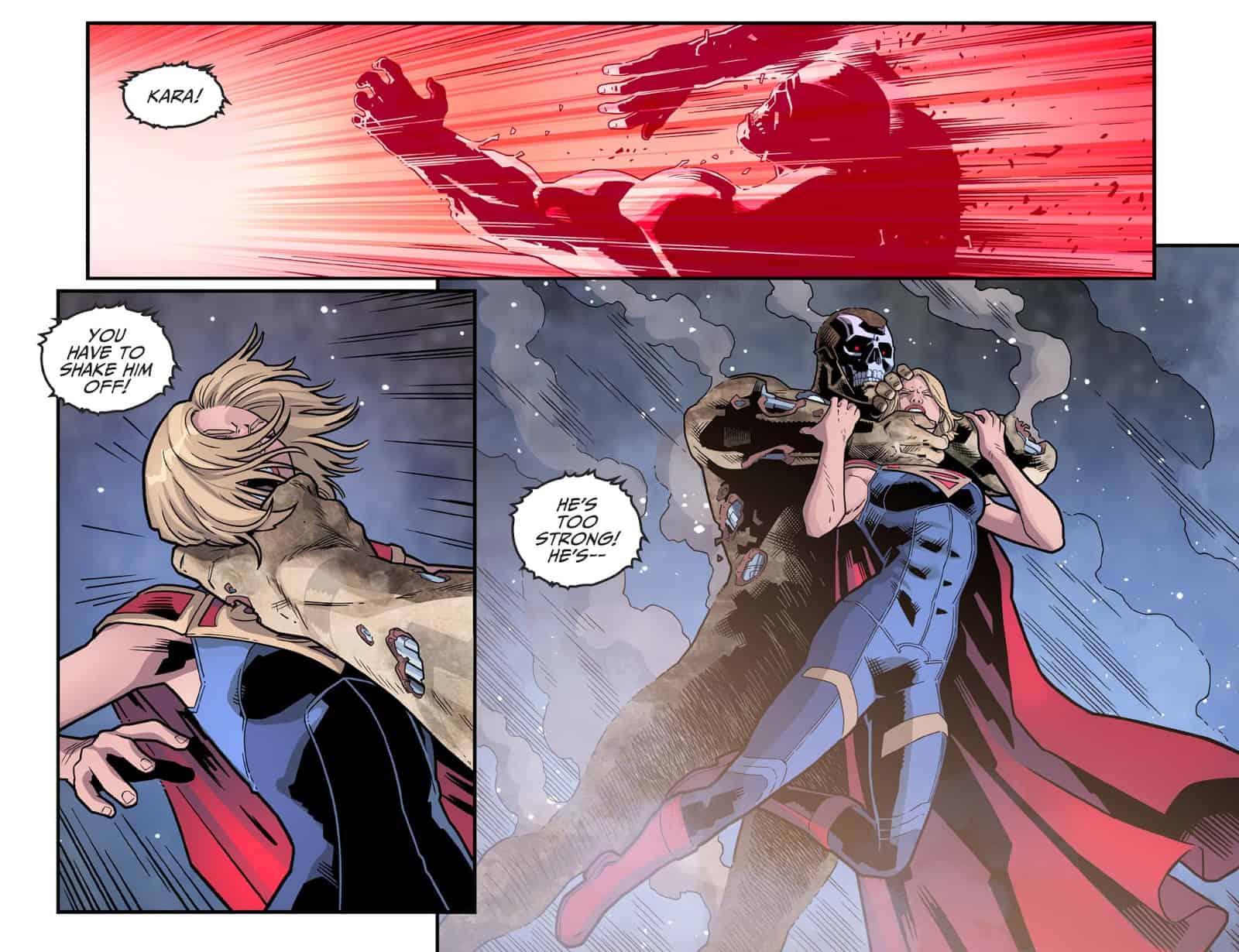 Kara struggles to stave off death when Athanasia confronts the group. Jason Todd (Dark Batman) tries to talk reason into her but she doesn’t care and threatens to shoot Ivo if he continues. Ivo, knowing his family is already dead, says he has nothing left to live for and completes their plan to slow down Ivo. Being shot in the head seconds after doing so. Back on the moon, Blue Bettle arrives to save Supergirl from an untimely death. He tries to talk with her only to realize she can’t hear him in space. This little moment of levity backfires when AMAZO swoops in and pummels the armored hero. Supergirl goes to Blue Beetles aid as she receives an update from Damian. AMAZO has successfully been slowed but remains as strong as ever. But Damian has a plan, he knows AMAZO is a type of metal so they’re going to exploit that fact. First by using her heat vision to rapidly heat him then her freeze breath immediately after to rapidly cool him. Weakening the metal enough to be knocked off with her super strength. 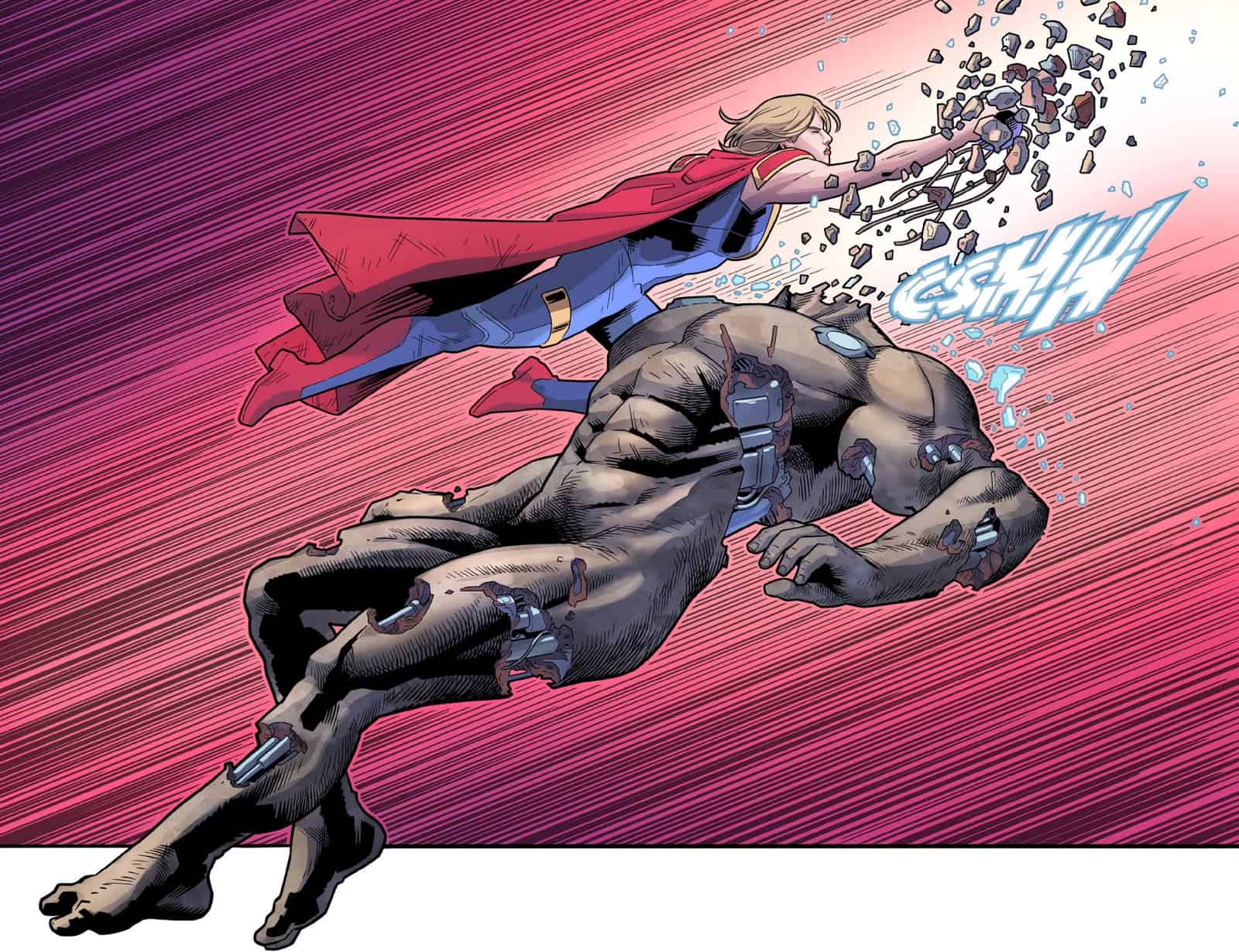 With AMAZO down, Blue Beetle gets a good look at his savior. Basking in the fact there’s a Supergirl now. 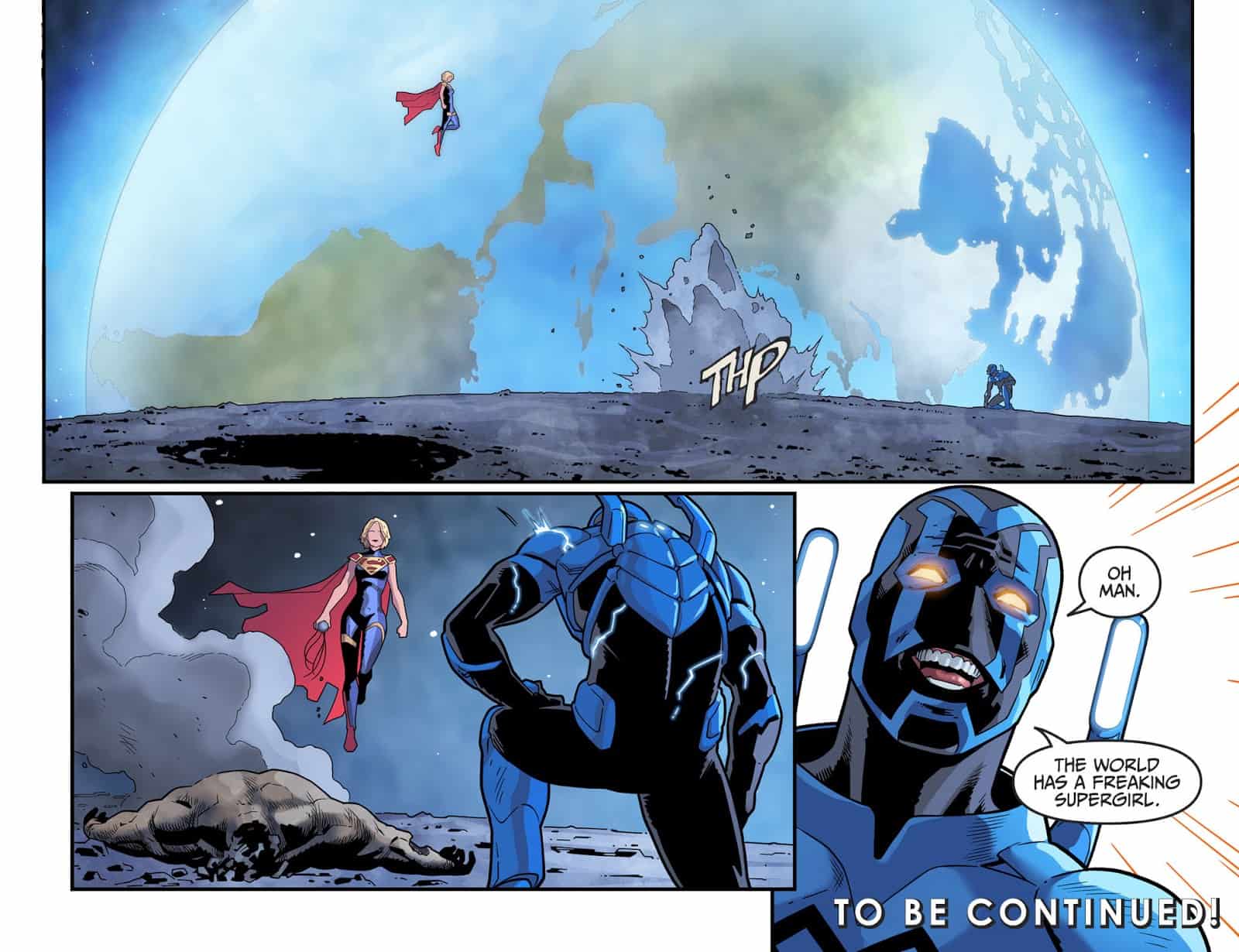 AMAZO has finally been taken down and it honestly felt a little anticlimactic and like it missed a potential opportunity. Making his metal brittle seems like something that shouldn’t have worked or should’ve been considered earlier. They may not have had it as an option to do given their team makeup but it feels like something Brother Eye would’ve suggested. Assuming AMAZO is down for the count, we miss out on Dex-Starr getting revenge on the android making him a Red Lantern in the first place. Something I was honestly expecting to happen given his surprise appearance during AMAZOs first rampage. For all the build-up it felt a bit too easy to stop AMAZO. Granted, Supergirl is a full Kryptonian who wasn’t recently injured or released from the Phantom Zone it still comes off as trying to hard sell Supergirl. That, or that the story arc needed to be ended because we already know the canonical future events. Though they did swerve a bit by having Blue Beetle meet Supergirl here rather than with Firestorm while on guard duty.

Final Thought: It felt like a letdown that could’ve done more. Assuming AMAZO can’t keep moving without his head. Also, if Atom wasn’t dead already I’m about 99.9% sure he is now.