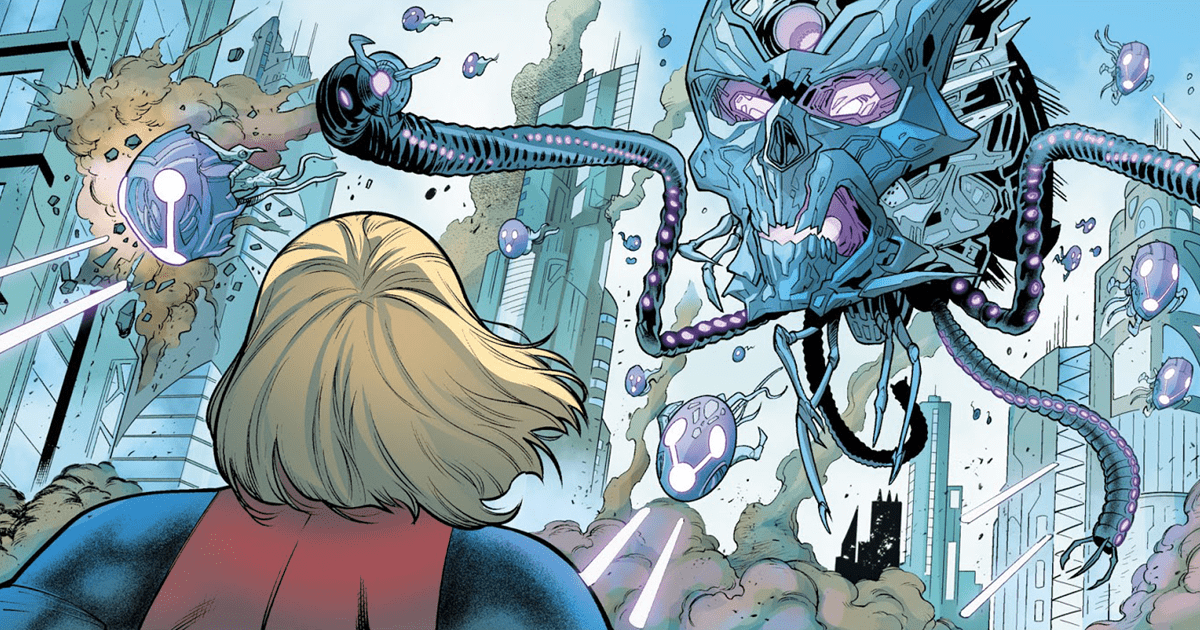 At long last, AMAZO has fallen and now it’s time to recover. Unfortunately, not everyone has made it out unscathed… 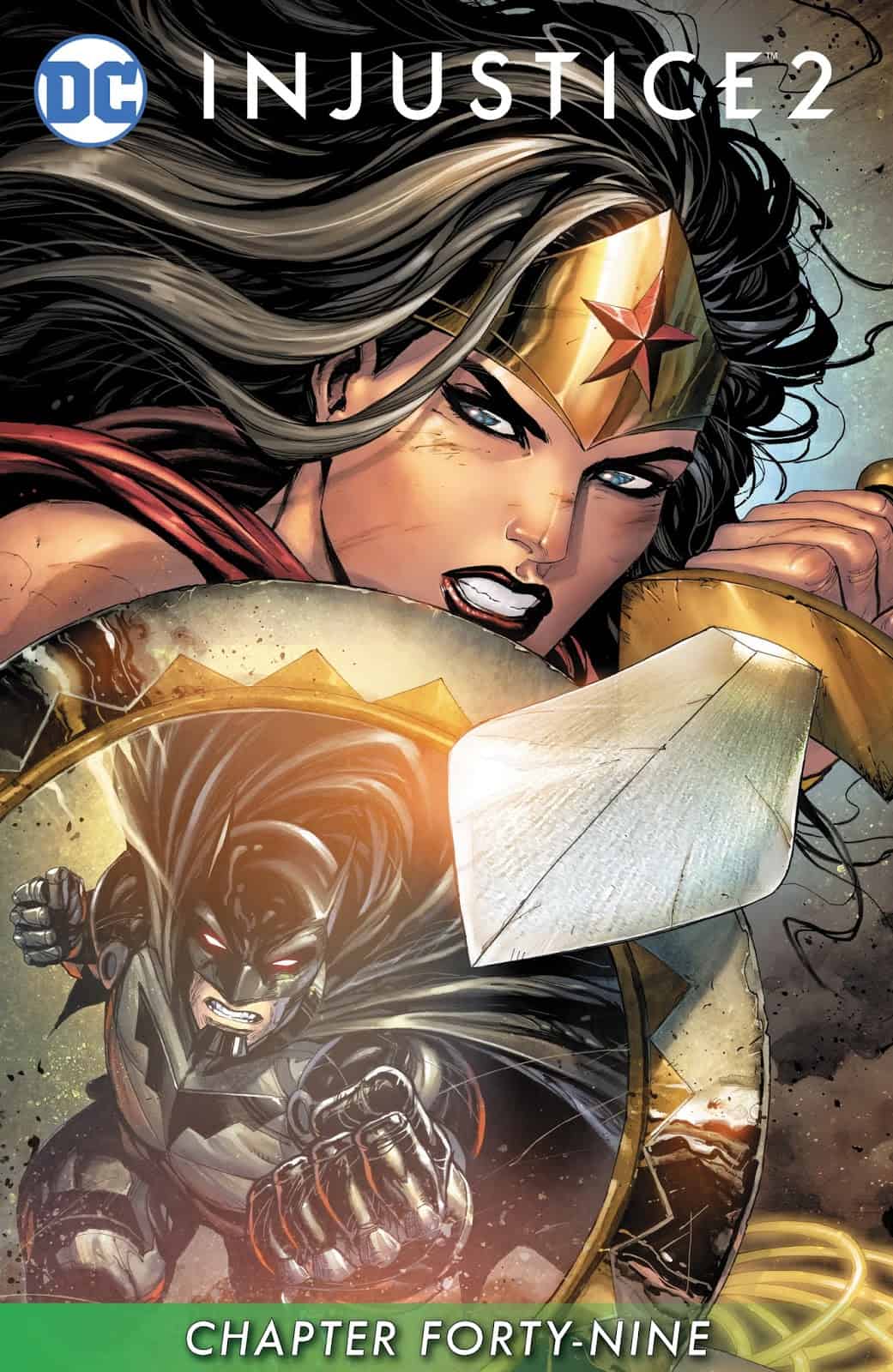 What You Need to Know:
With some coaxing from Jason Todd, Doctor Ivo aids in the destruction of AMAZO at the cost of his life. Between his plan to slow the Android down and a timely distraction from Blue Beetle, Supergirl has taken down AMAZO once and for all.

What You’ll Find Out:
Back on Earth, Batman finally recovers and with Wonder Woman begins damage assessment now that they aren’t being pummeled by an android. They don’t know AMAZO has been defeated so he orders a retreat for the injured and for those capable of fighting still to get ready. Black Canary & Wildcat check in on Superboy who asks about Cassie (Wonder Girl). Wonder Woman hears this and helps Wonder Girl from under some rubble. Unfortunately, she doesn’t care for Diana and wants none of her assistance. Wonder Woman begins to express her surprise at Cassie being alive but is cut off with the sad truth they were trapped in the Phantom Zone by Superman. Wonder Woman is shocked by this and promises she didn’t know, showing a human side that hasn’t been seen very often in the Injustice universe. 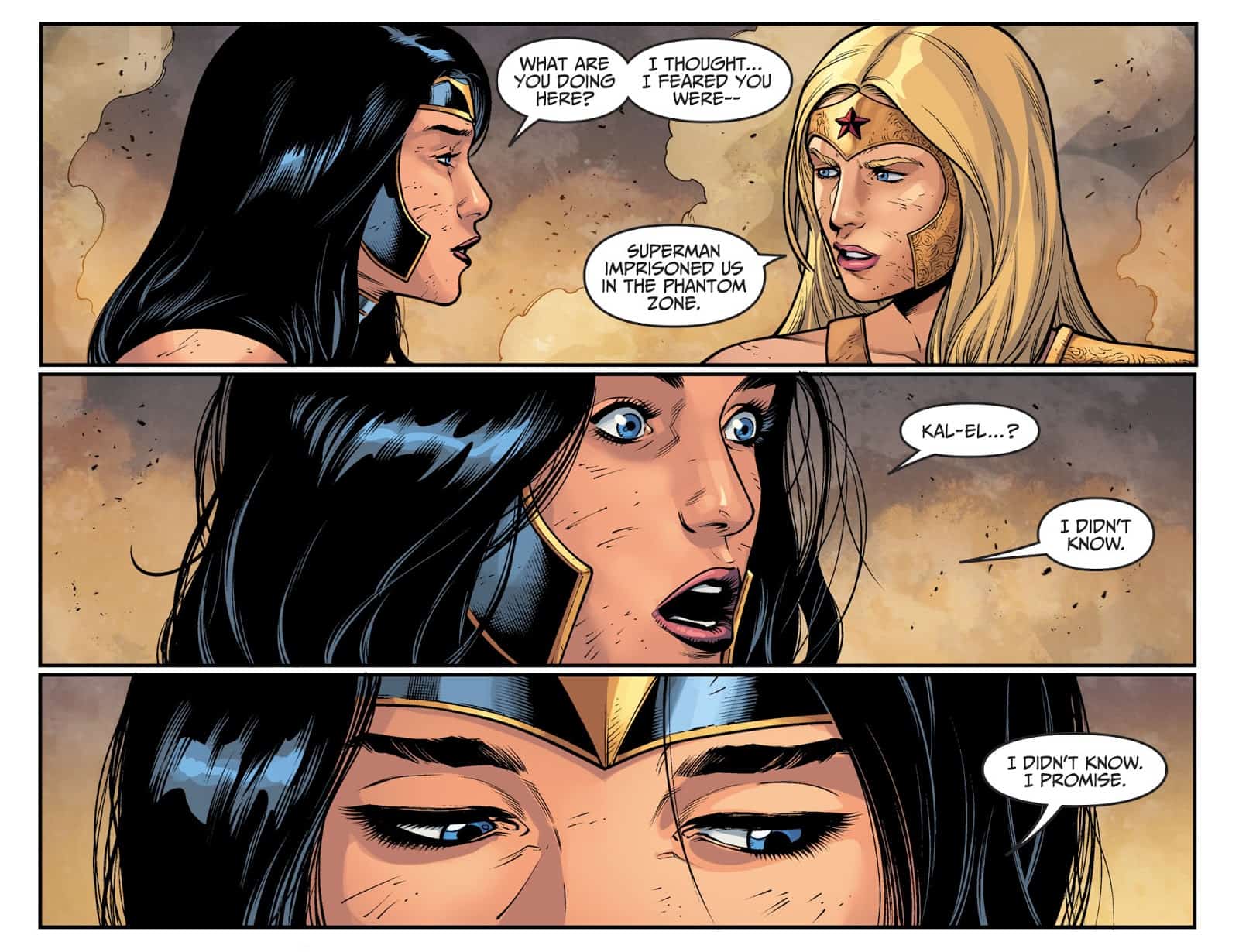 Harley checks on Booster Gold and comments on his costume in a mix of genuine complimenting and possible backhanded compliments mocking its design. Batman gets them refocused and asks Booster if he can contact Blue Beetle. Unfortunately, Booster is unsure he is able to. The scene transitions once more to the moon as Supergirl holds the brain of AMAZO in her hands. Blue Beetle checks in on mid-flashback when she realizes she needs oxygen. Blue Beetle expands his armor into a mini-bunker so the pair can breathe and talk in peace. Supergirl doesn’t say who she is or her name simply that she’s here to help. Blue Beetle is more straightforward and introduces himself by name. She worries about AMAZO’s brain getting into the wrong hands briefly before destroying it. Permanently ending his threat to mankind. Supergirl asks that Blue Beetle not tell anyone about her existence and hints at a bit of dislike and distrust of Batman. She may have been here to save the day, but she still has the conditioning from Wonder Woman and Black Adam blinding her in ways. As Supergirl flies off peacefully back to Earth, Damian (Robin) and his team must fight their way to freedom having helped AMAZO be destroyed. Animal Man turns into a giant hawk and flies off with Damian while Vixen takes Jason Todd. But the Suicide Squad hot on their tail. The combination of Man-Bat and Poison Ivy catch Animal Man before he’s shot through the head by Deadshot. 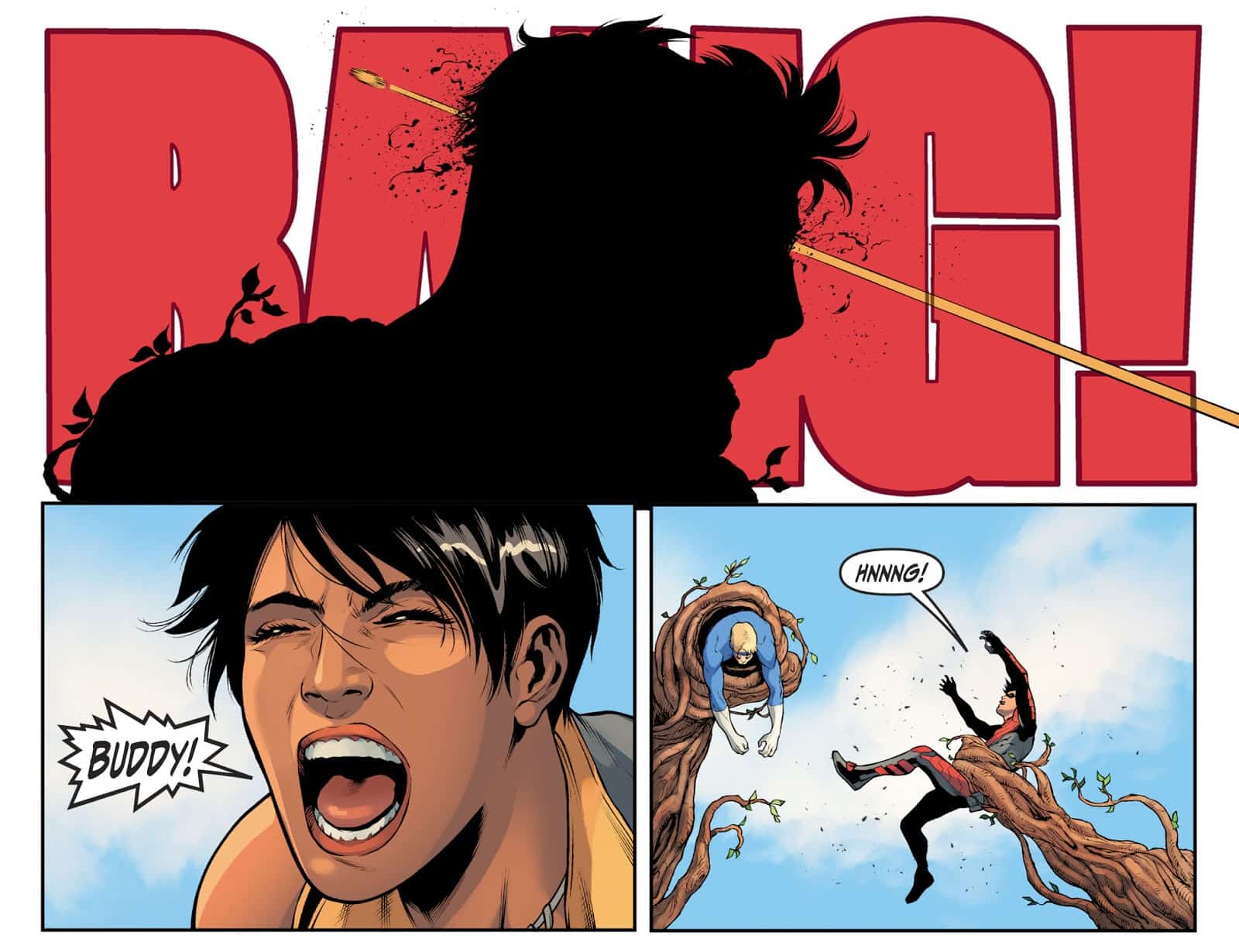 With Animal Man now dead, Damian is helpless against Poison Ivy. Seeing no other choice, Jason Todd convinces Vixen to keep on with their escape. Leaving Damian to fend for himself… 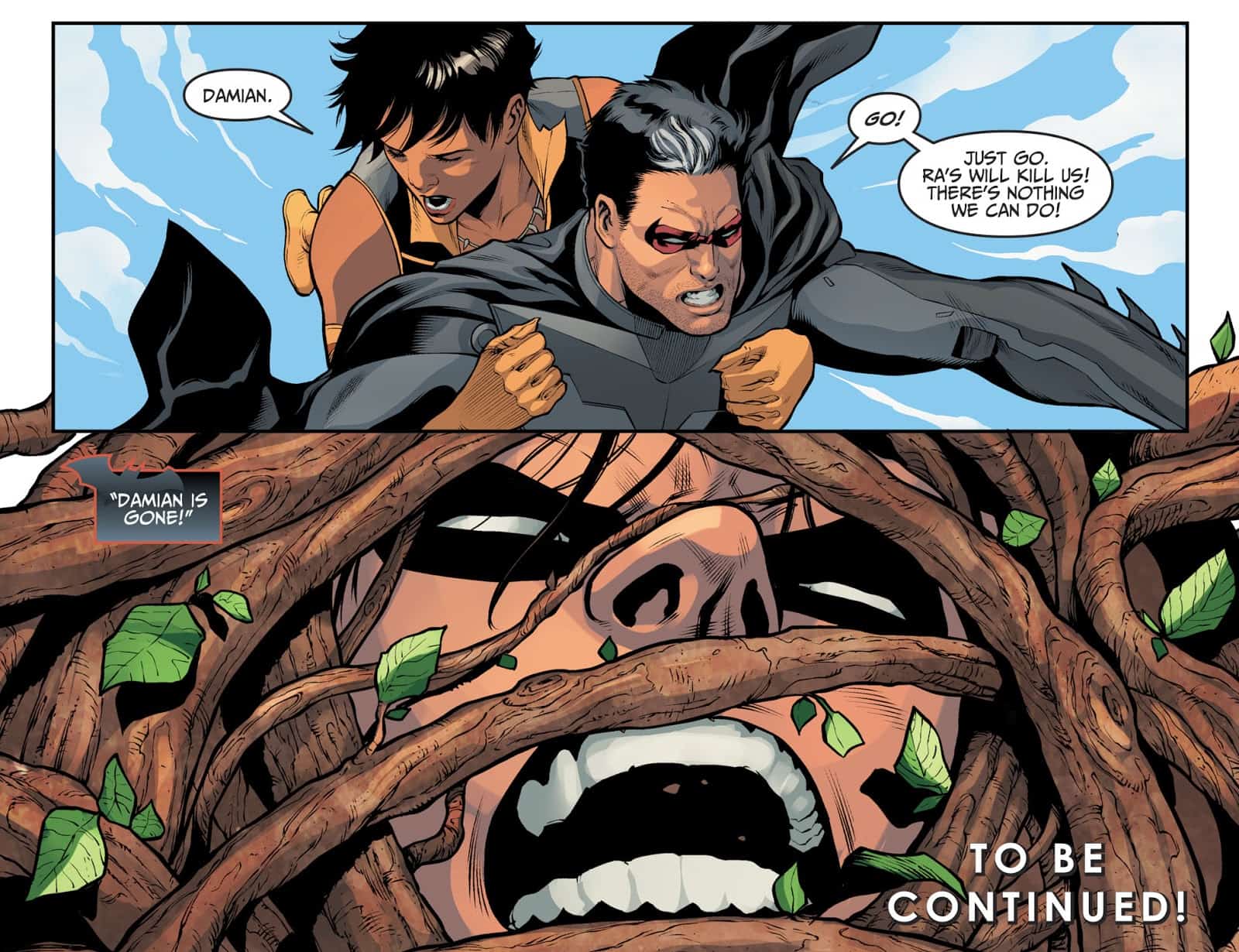 Quite a bit was going on in this chapter but not a whole lot actually happened, which isn’t a bad thing. It was mostly catching up to show where everyone stood after the defeat of AMAZO. Surprisingly, the only possible death from the actual fight with AMAZO himself was Atom. Who nobody seems to remember currently. Given the circumstances, it does at least make some sense. Wonder Woman got a bit of character “rerailment” to show she at least still feels “some” remorse over what happened in Injustice 1 and may even question Superman’s actions. Although canon suggests she won’t be too against him to free him. Blue Beetle keeping Supergirl’s presence a secret does somewhat smooth out the issue of him having met her yet seemingly meeting her for the first time in Injustice 2. Implying that he was still keeping her secret while she was just stubborn or doing her job. The final portion of this chapter that focused on Damian and his team’s escape was enjoyable and makes you question how he’ll escape alive.

Final Thought: Overall it was okay. Not a bad chapter by any means. It still sucks that the fight ended as quickly as Supergirl entered the scene, Dex-Starr didn’t get his revenge, and that Atom is still unreferenced. But the setup for whatever they have planned next was nice at least.