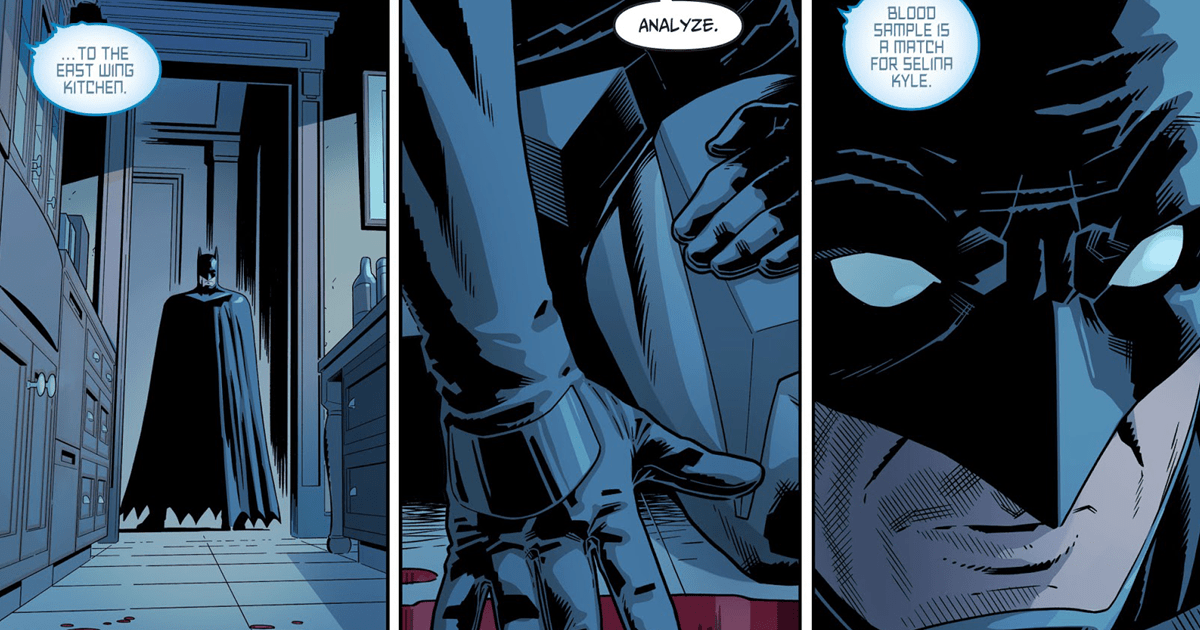 Catwoman has been shot & Alfred is now left at the mercy of Athanasia. Will he meet an untimely end once more or can he be saved this time? 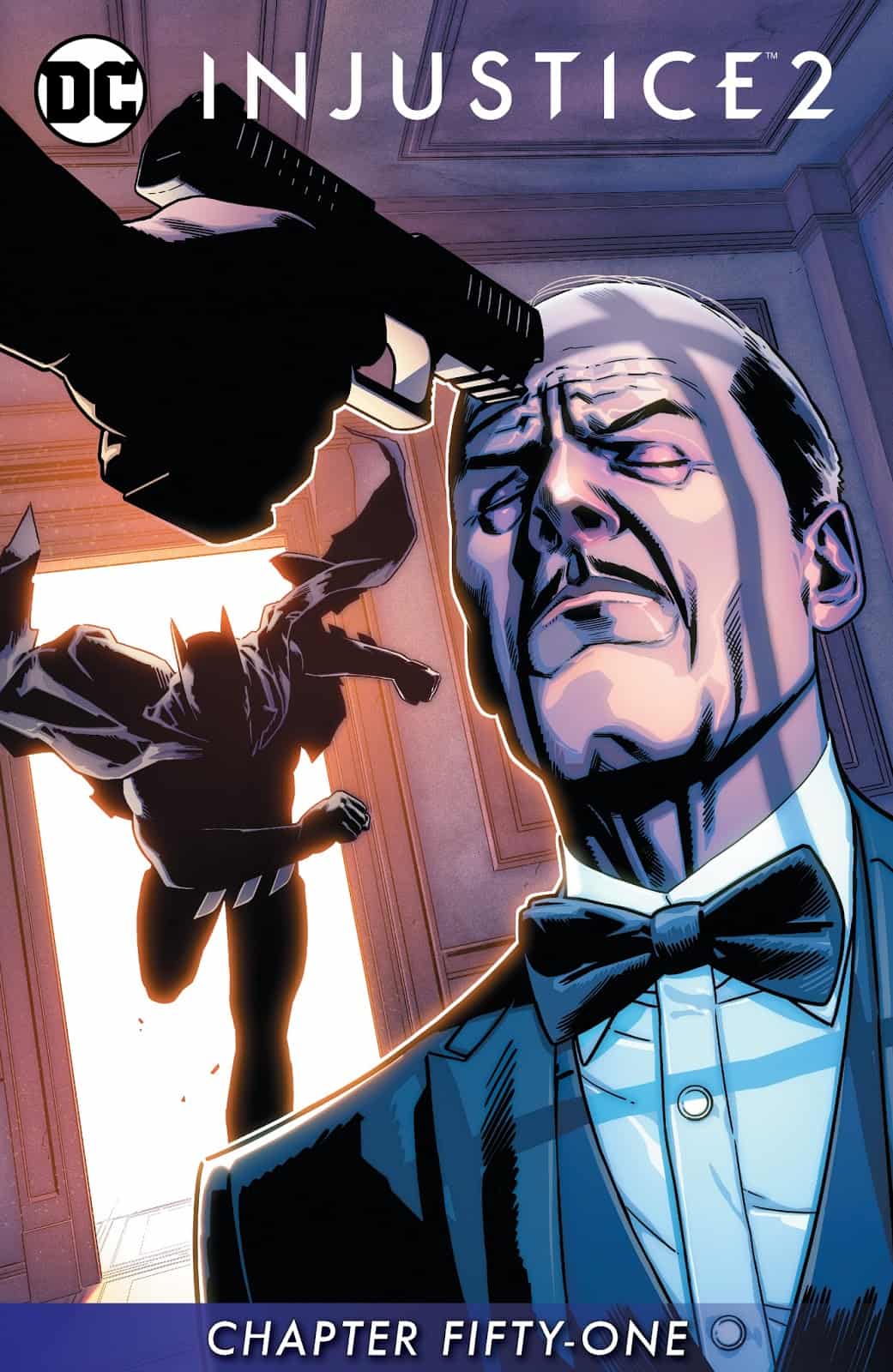 What You Need to Know:
With the defeat of AMAZO, both Batman & Wonder Woman’s forces have returned to their respective lives. But while Batman tries to prevent what happened with AMAZO from happening again, Athanasia uses her newly found freedom. Shooting Catwoman in the stomach and holding Alfred at gunpoint…

What You’ll Find Out:
At Wayne Industries, Batman is having a meeting with Booster Gold, Black Canary, Green Arrow, and Steel while Harley babysits Conor outside. Batman declares that Ra’s was right about the world needing to be saved from itself. Booster snarks about this bringing up the last time he attempted this, the president was assassinated and a crowd of people was killed by Aqualad. Batman begins to start what would’ve been an unholy reprimand but Brother Eye interrupts him mid-rant. The security system in a portion of Wayne Manor is offline despite the number of defenses to prevent this. 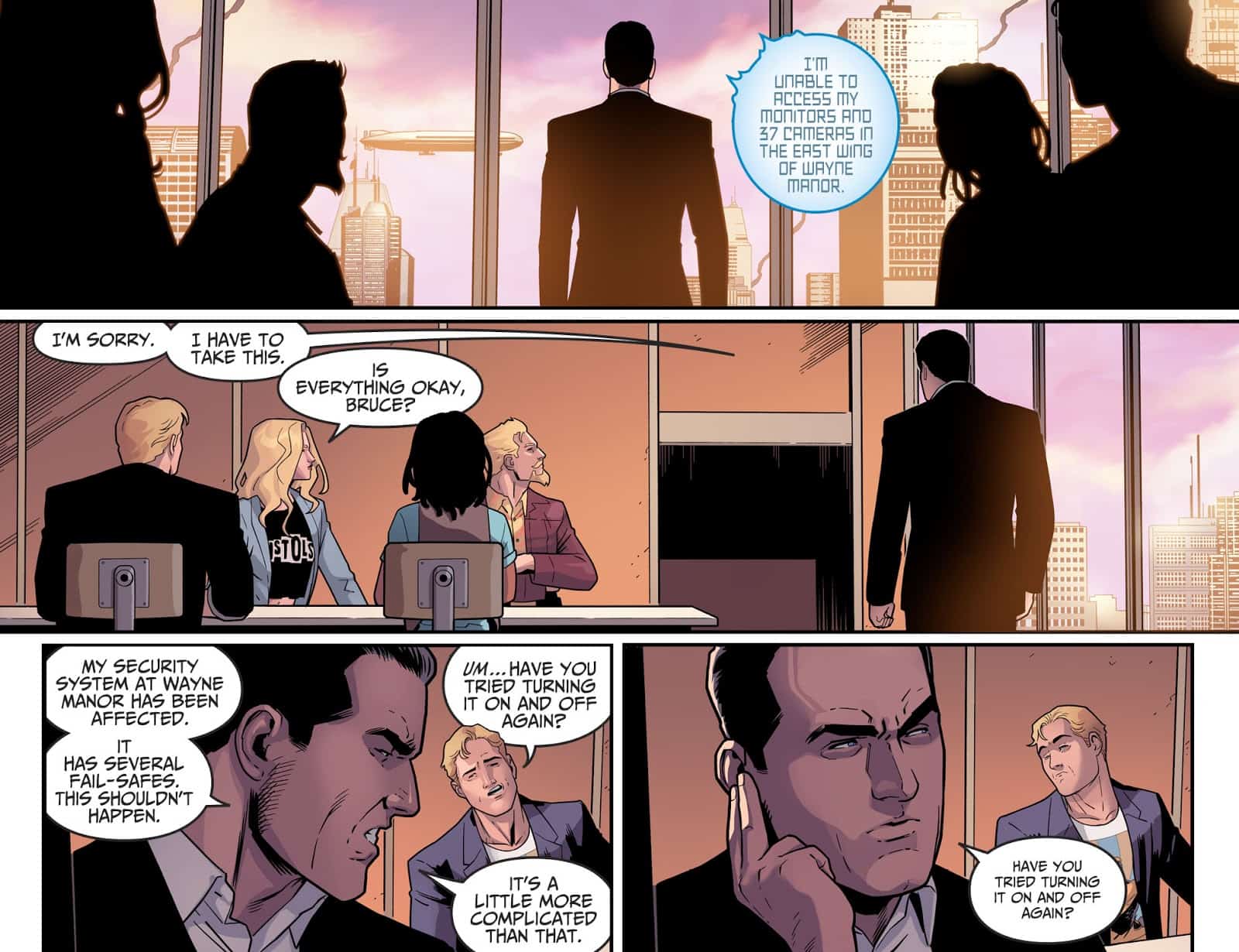 Things look grim with Catwoman & Alfred having been in that portion of the wing and Brother Eye unable to contact them in any methods he tried. With no other options, Bruce chooses to investigate. Declining to accept Black Canary’s assistance. She reasserts that he should accept friends for help before he teleports into the Batcave. He dons his costume and begins to investigate, discovering a pool of blood belonging to Catwoman. Batman is distressed at the prospect of his family being in danger or dead once more and runs to find Alfred. Successfully locating Alfred and Ace being held at gunpoint by Athanasia. Ace, in particular, is uneasy but remains on her lap. Batman asks what his daughter wants but she just implies she wants his death. Alfred in classic form stands up for Batman. Athanasia doesn’t want to harm Alfred but also indirectly admits that like him, she has died and was resurrected with the Lazarus Pit. Becoming gradually more unhinged and shifting the gun from pointing at Alfred to pointing at herself. 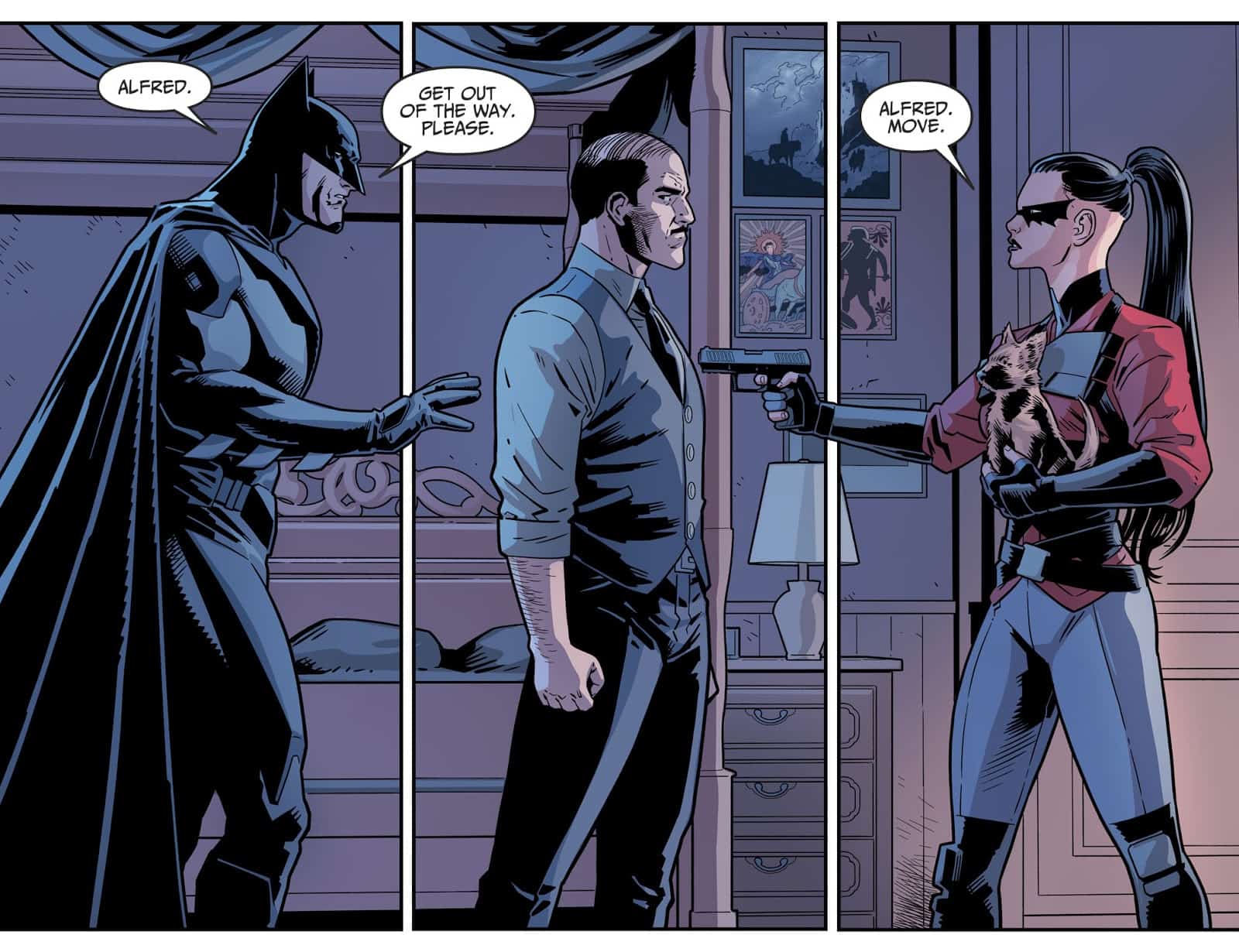 With tensions high, Ace begins to bark. Athanasia trying to get him to quiet and slipping further and further off the deep end from the annoyance. The chapter ends with a view of Wayne Manor as the gun fires. Both the shooter and the victim unknown… 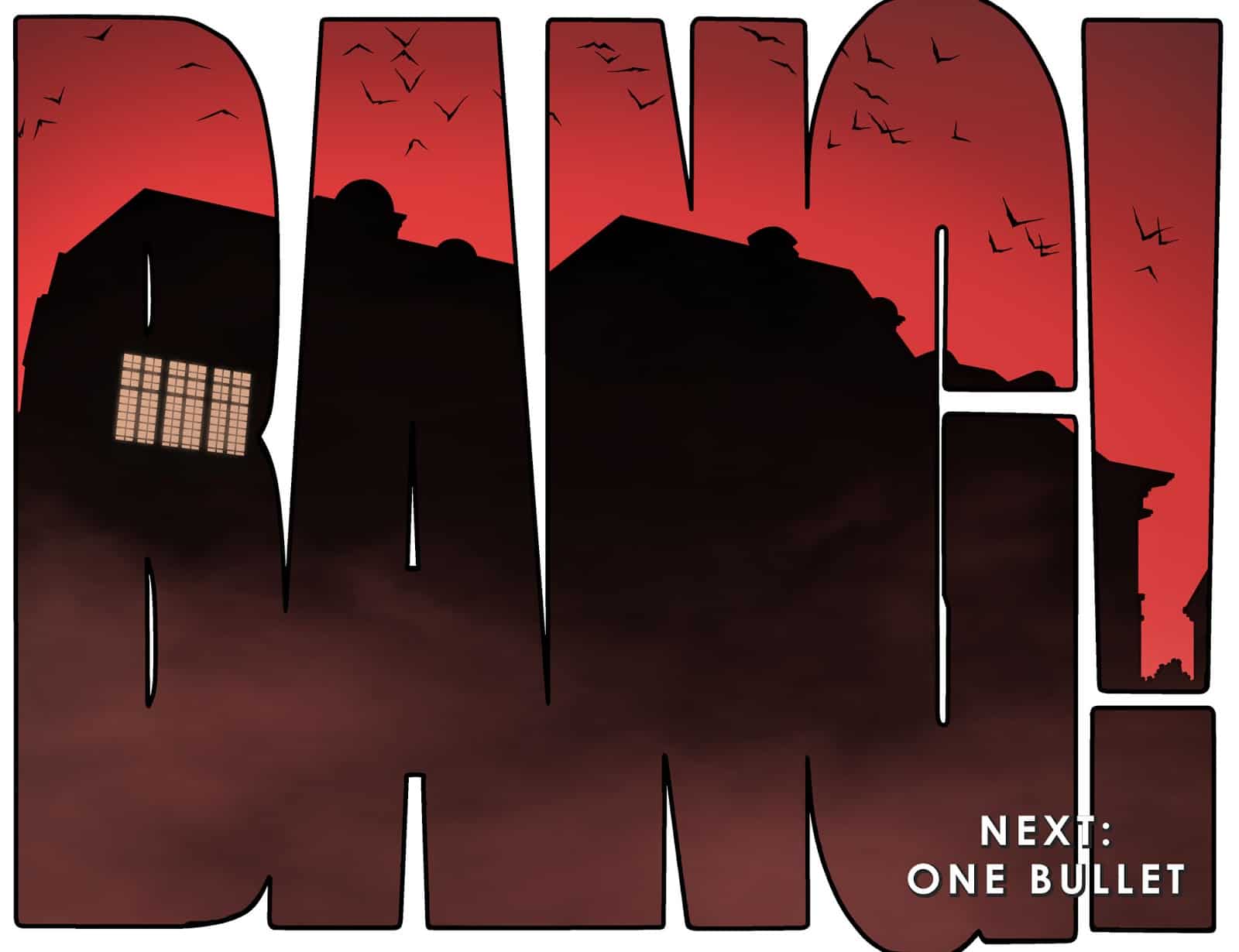 What Just Happened?
This was a good suspenseful chapter done in a way we haven’t really seen in Injustice for some time. Rather than going from 0 to 100, we got a slow boil all chapter long. Starting with Brother Eyes foreboding message, discovering Selina’s blood but without a body in sight, and finally everything with Athanasia who has greatly improved. She’s no longer just a blatant replacement for Damian within the League of Shadows, but a fairly broken character. Up until this point, she was largely flat but now combining how she was treated in-universe with the implication she’s already died adds a new layer to her. Now we have to wonder how she died and just how unhinged has she always been. If the fact she’s so dedicated to Ra’s unwaveringly is because of her mental instability from her resurrection. That everything in this and the last chapter is basically a child lashing out at her parent she felt abandoned her. Giving the sense she, quite literally, was how Damian would’ve turned out had he not been taken by Batman.

The way they used art to set the tone was also done extremely well. The focus on facial expressions for Athanasia really sold her she was just barely keeping it together. All the while Ace is just growling and kinda setting up how she’s so quick to snap in the final pages. Special mention goes to the page split into three panels with Batman, Alfred, & Athanasia all in their own brackets. Batman who wants Alfred to move to protect him. Alfred wanting to stand his ground and protect Bruce. Athanasia wanting Alfred to move so she can presumably kill Batman. All being within feet of each other but their own motivations, like the brackets, keeping them isolated from the others. The final page being a massive Bang sound effect with the black Wayne Manor silhouetted within it and a blood red sky was also a very nice touch.

Final Thought: This was a really nice change of pace compared to the rest of Injustice 2. A more grounded normal conflict instead of one with world-shattering characters and just fighting. This felt more emotionally focused and suspenseful. They even managed to turn Athanasia around from a blank slate character over the course of a single chapter. Now I’ll actually care and be sad if she does end up dying at the end of this. On the downside, which is extremely minor, is I felt like the opening scene with Harley & Connor could’ve been cut. It adds nothing to the overall chapter and just felt odd.