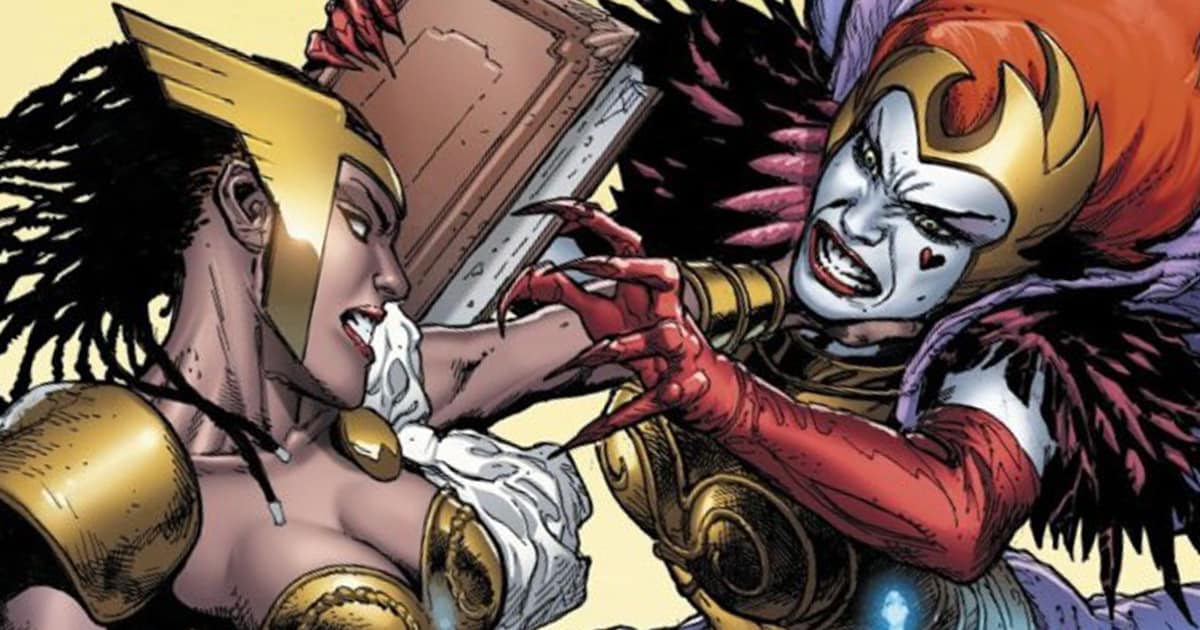 The Justice League of America is in a fight to save the planet from the Queen of Fables. From the dimension of Imagination comes the protector Promethea! 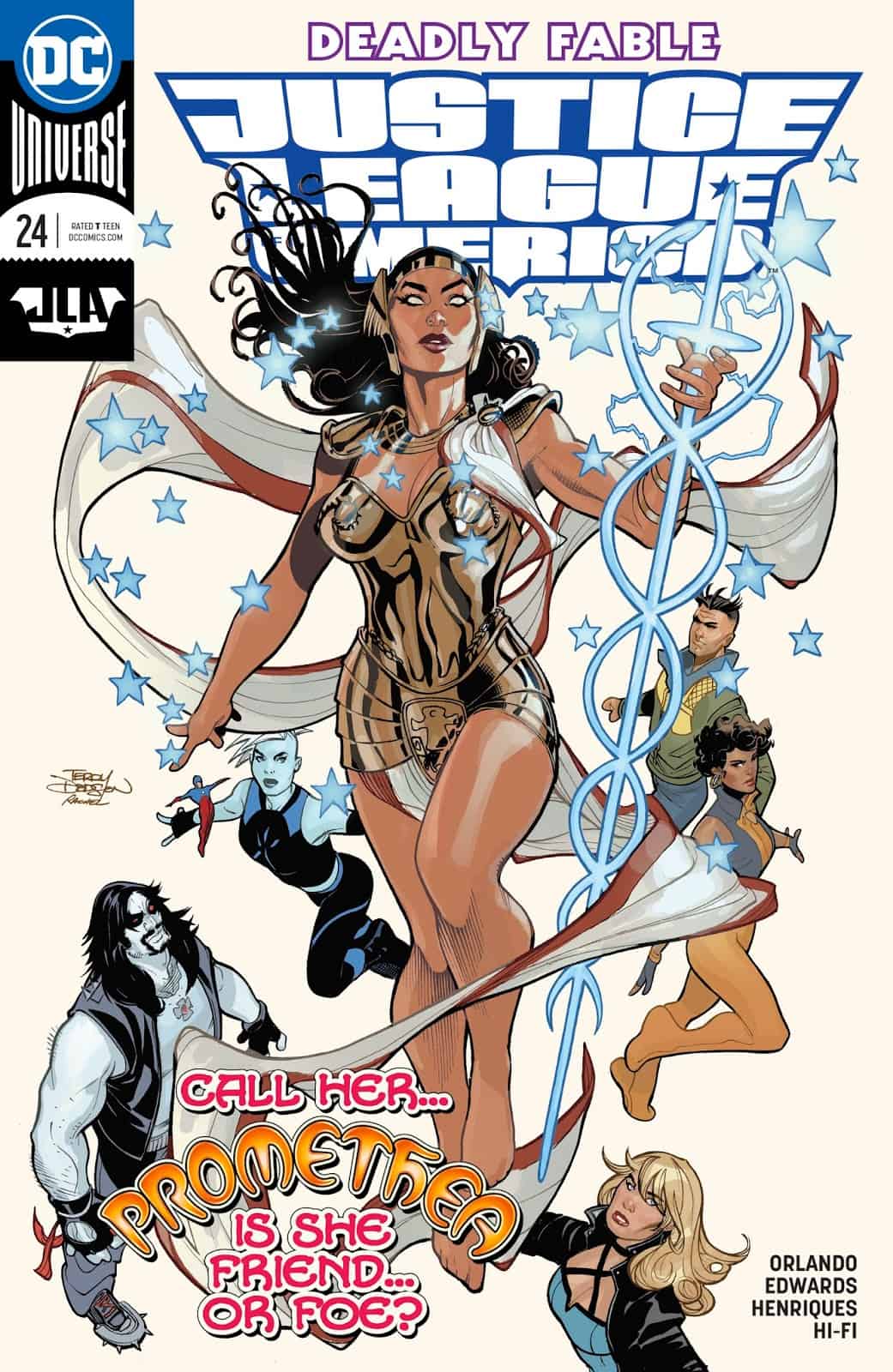 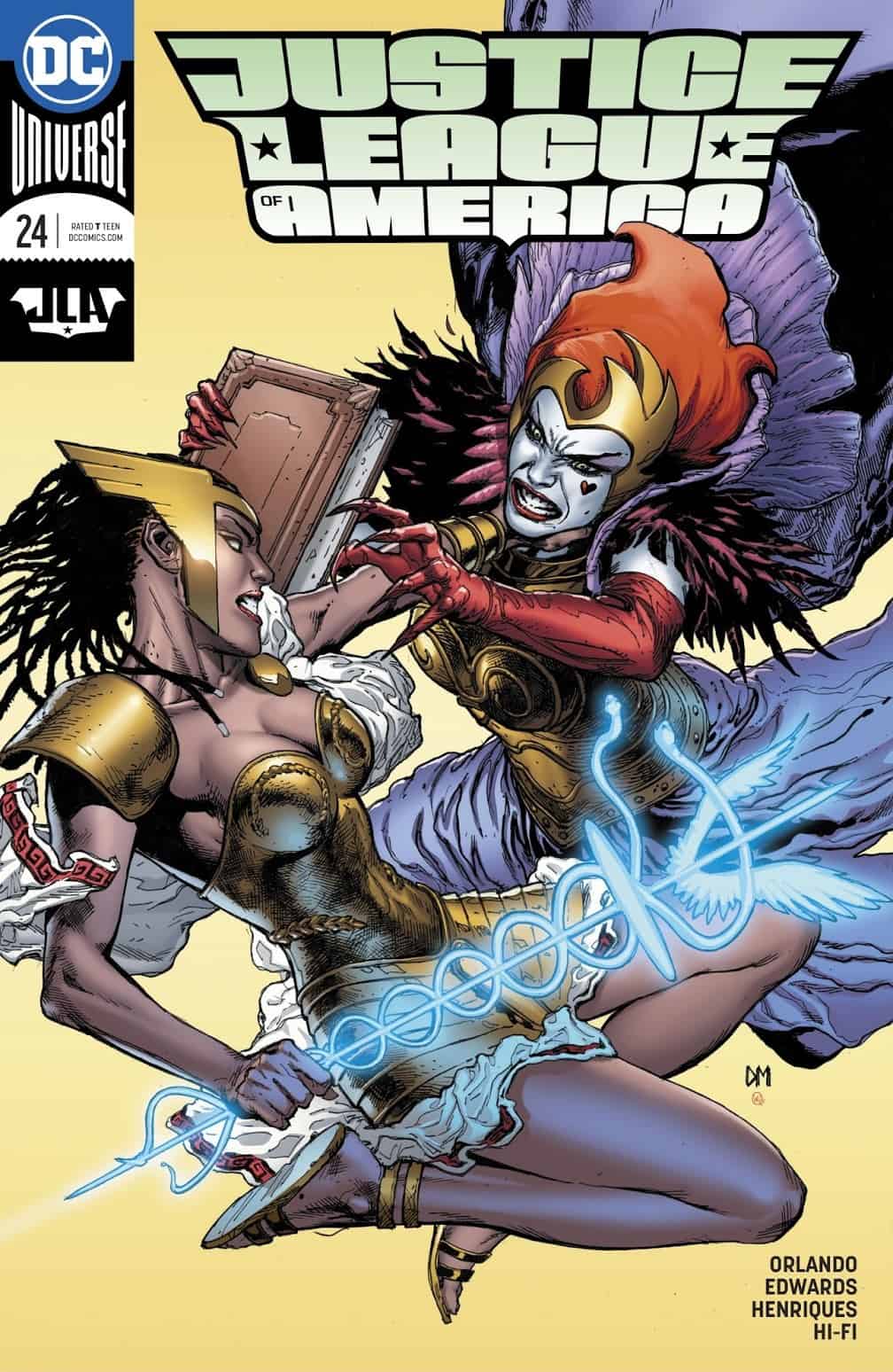 Mari freshly regenerated from her recent explosion uses he Tantu Totem to connect her to all of the people who had seen her die. She asks that they sacrifice their wishes to help defeat the Queen’s power. Unbeknownst to her, she has switched to a more potent power source in their Fear. The team still doesn’t know that Vixen is OK, and Mari tries her best to rally support from the bystanders.

Emerging from the portal Promethea engages Tsarita and they battle while the Justice League takes on the remnants of her Woodsmen. Lobo, not pleased with Frost’s betrayal of the team, attacks her. She holds him back, but cannot defeat him for long. The Atom intervenes and shrinks Lobo down to a more manageable size. 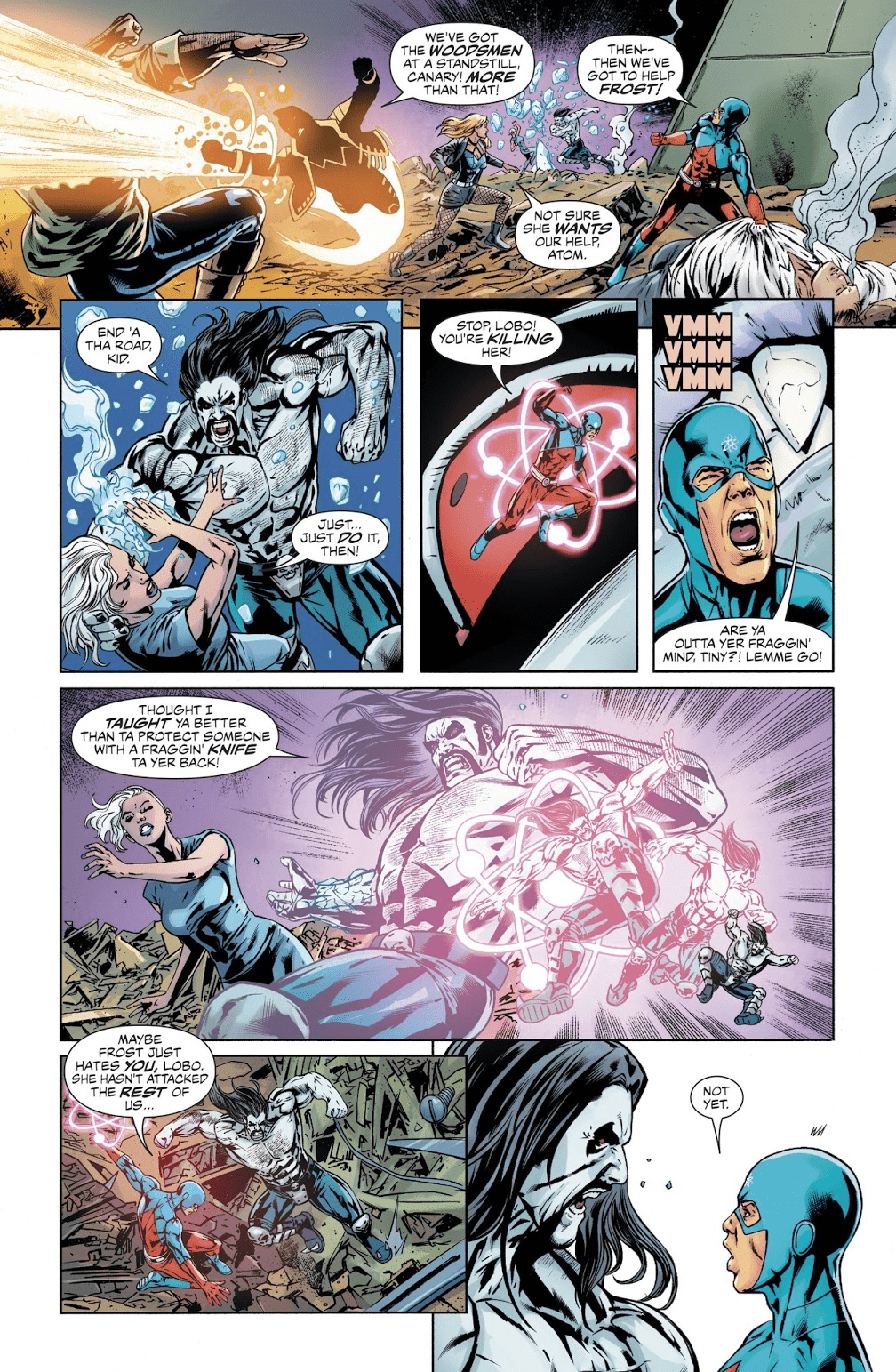 What You’ll Find Out:
Locked in battle, both Tsarita and Promethea seem to be an equal match, but it’s clear that the team needs Promethea to win this fight. After some long-winded exposition, from The Queen of Fables, Promethea seemingly abandons the fight. 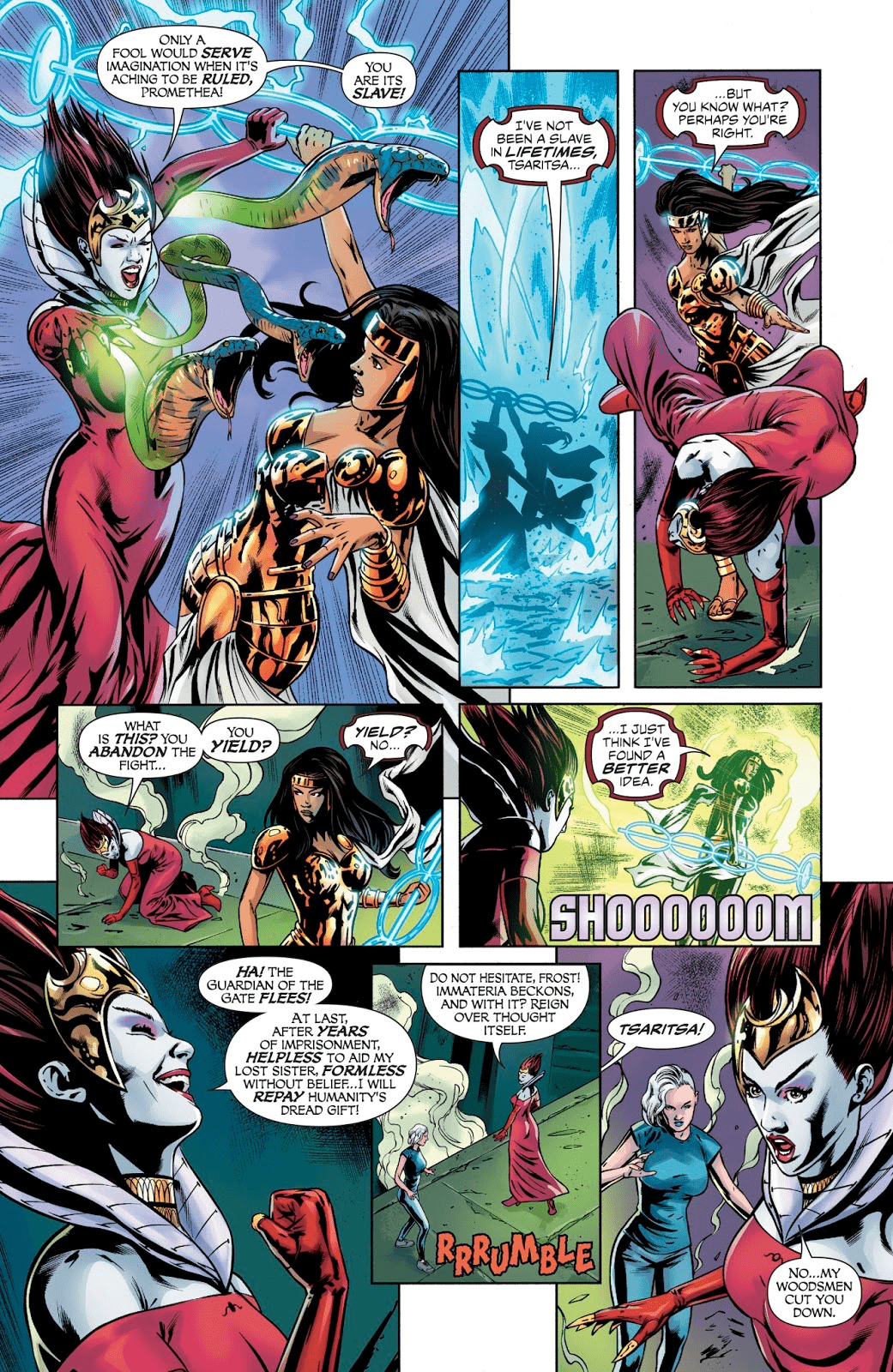 What Just Happened?
As she celebrates her victory, Vixen, now empowered by the spirits of all the nearby people flies in and shatters her tower! Sort of a mystical antenna to collect emotions an grow her powers. 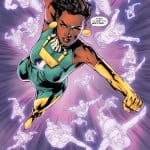 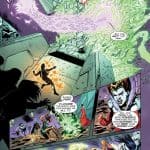 The fight goes back and forth once again, until finally willing to part with her wish, Caitlin Snow with help from the Atom confronts Tsarita. She creates a cocoon of Ice, and she freezes the queen pulling all of the heat from her enchanted body, but losing her human form in the process. Frost started this story with her cure, and she was afraid that her powers would leave the world a frozen wasteland, and that she would never feel the touch of another person again. She sacrificed that to save the world and her friends. 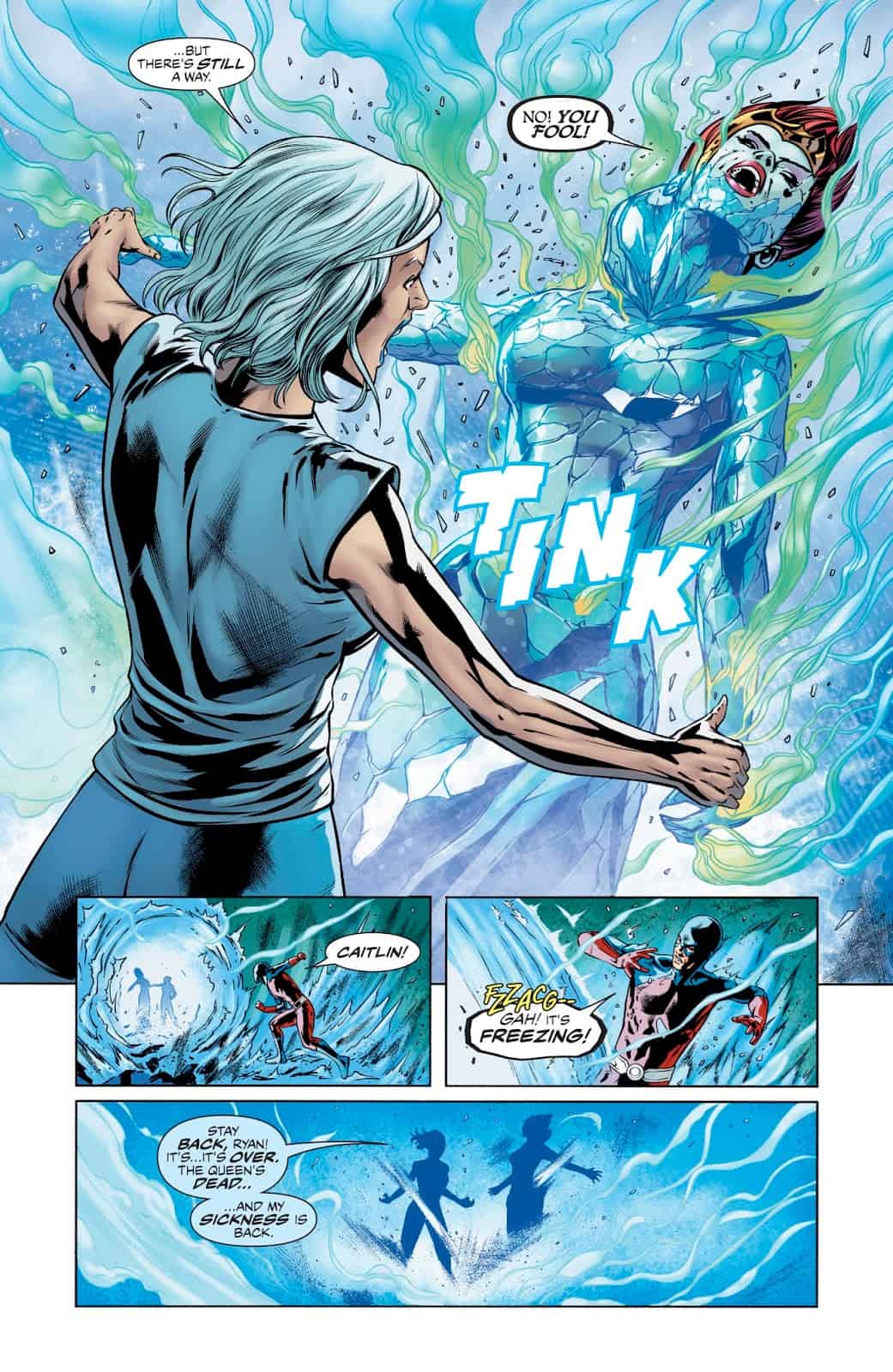 Promethea shows up again and tells them that the battle’s victor was always known to her, and all she needed to do was to step aside. She whispers something to Caitlin as she waves goodbye with a smile. 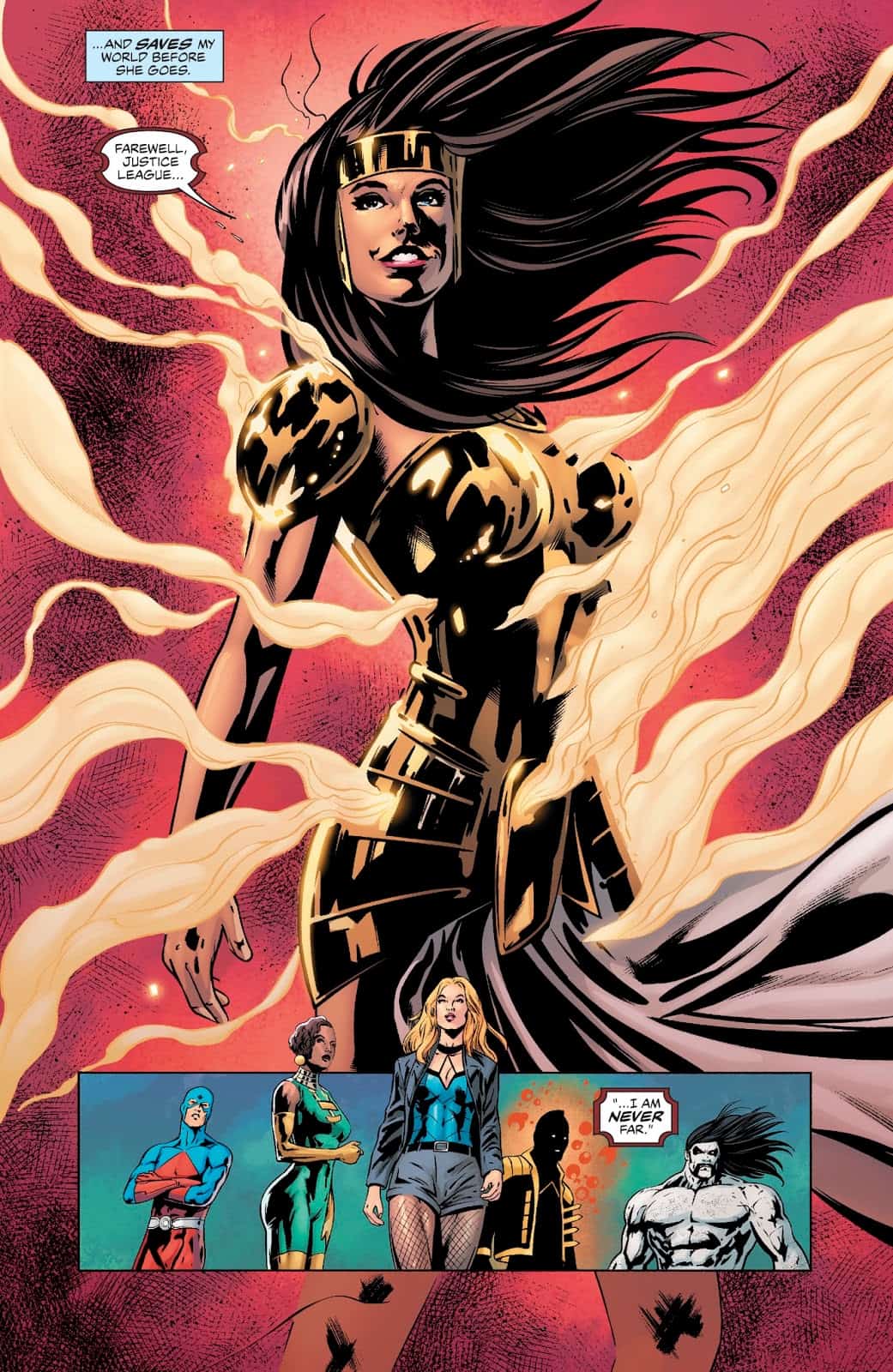 The team debriefs about what has happened. Ryan asks Caitlin what she whispered and Caitlin said: “Just what I needed to hear.”

With the Ray back in the line up the team contemplates rebuilding the headquarters. They are interrupted by Batman with another task to save another world. 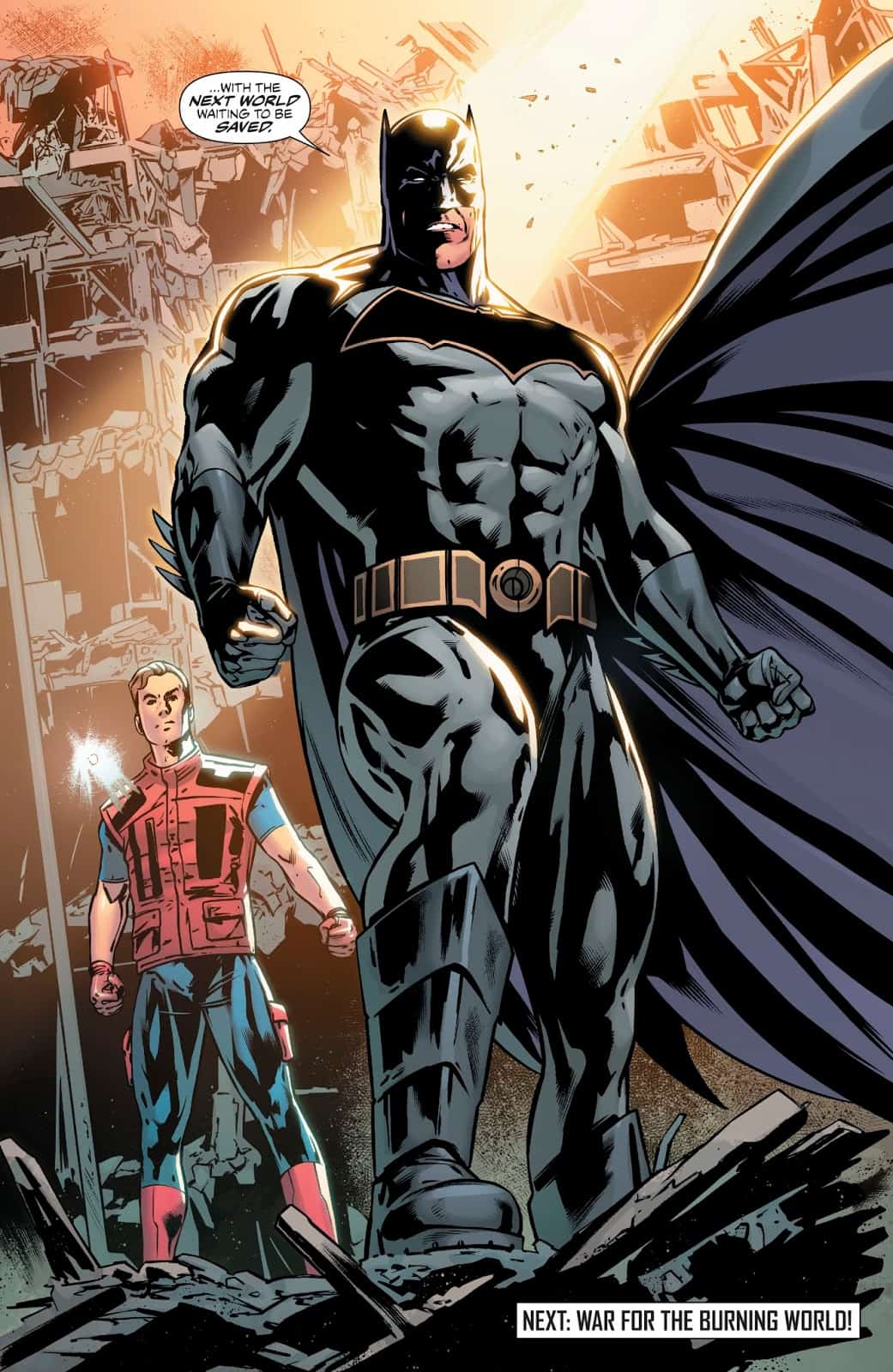 Rating: 6 / 10
Final Thought:
First off Wow! What a cover! Terry Dodson art is spectacular on the cover. The stories that I have seen in the past 7-10 issues are all two-three issue mini-arcs that seem to be wrapped up by the third issue. I feel like there is a lack of true peril and the books are just stale attempts to make a small event seem catastrophic. Even when Vixen seemingly dies, there are no lasting consequences besides she gets a new costume. The stories have as much continuity as turning a plot switch on an off. I am not getting good characterization, and the personal relationships are moving along at a snail’s pace. This team so far is wasted on these trivial events, and I have a vague idea of who the characters are supposed to be around each other. I have mostly a problem with the Stories or plots, the dialogue is well written in the case of the Villain usually, but here’s hoping the next issue gets much better with the return of Batman.