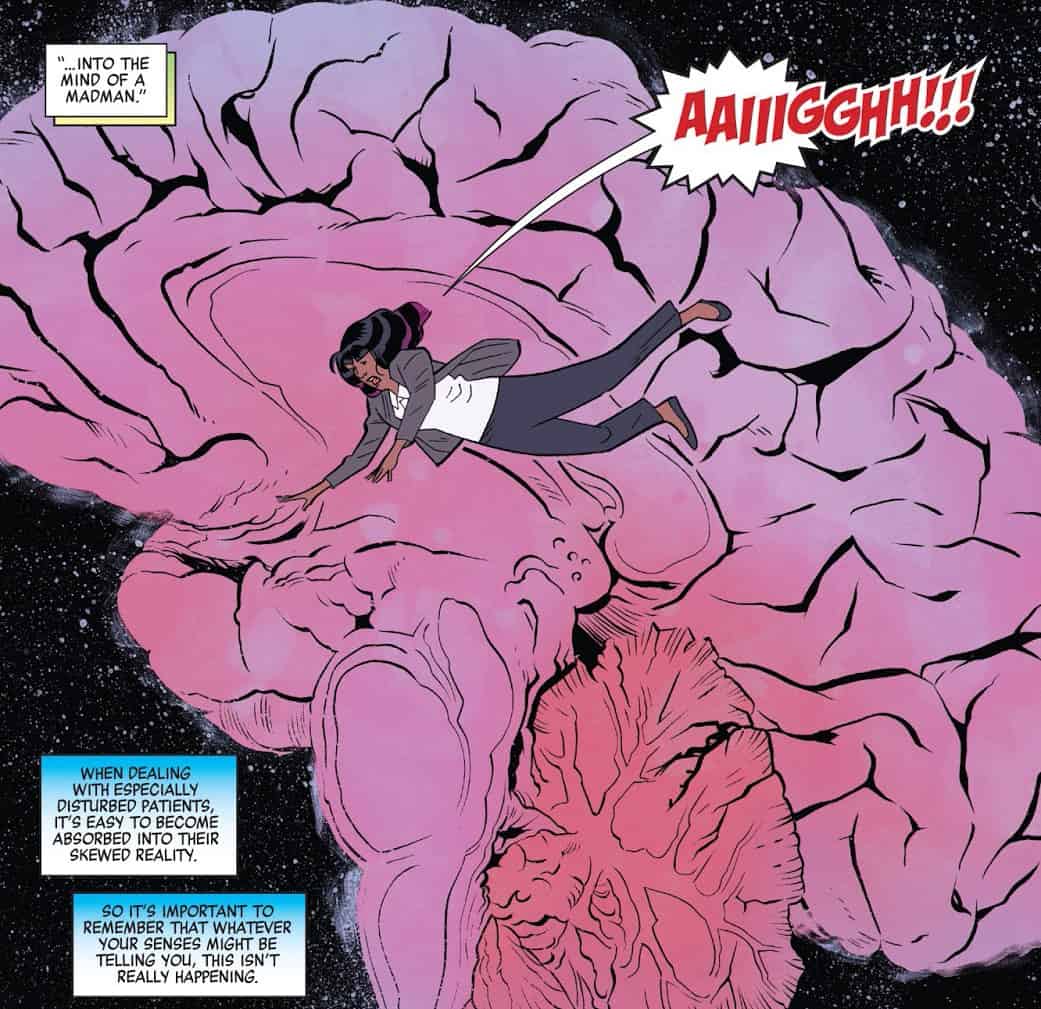 With Lord Trauma becoming stronger as he consumes David’s alternate personas, David has convinced the famed Dr. Hannah Jones to help him. He helps her get inside his mind, literally, and while she attempts to address ‘David’s extreme case of ‘Dissociative Identity Disorder’, David attempts to manage caring for her body in the real world. Neither expecting the trauma he has suffered to be quite so dangerous.

What You Need to Know:
Born the illegitimate son of famed mutant activist Charles Xavier, David Haller’s past is marred by trauma, both physical and psychological…but he doesn’t bear this weight alone, hundreds of unique personas, all with separate mutant abilities, live within his mind.  He is many.  He is LEGION and he is being tormented by one of his personas calling itself Lord Trauma. Legion traveled to Manhattan seeking the help of Dr. Hannah Jones, Celebrity Psychotherapist.

After saving Dr. Hannah Jones from being devoured by her own sofa, the most horrifying and reality twisting experience of her life, or so she thinks, David convinces her to help him. While Hannah’s ego is responsible for her agreeing to help him more than he is, the decision is something she quickly learns was a mistake. Clearly apparent that David suffers from the most extreme case of  Dissociative Identity Disorder, coupled with what she can only describe as demonic possession.  Upon Dr. Jone’s suggestion to hypnotize David to quickly get inside of his mind, David offers up a much quicker method, and Hannah finds herself literally in the mind of a madman. 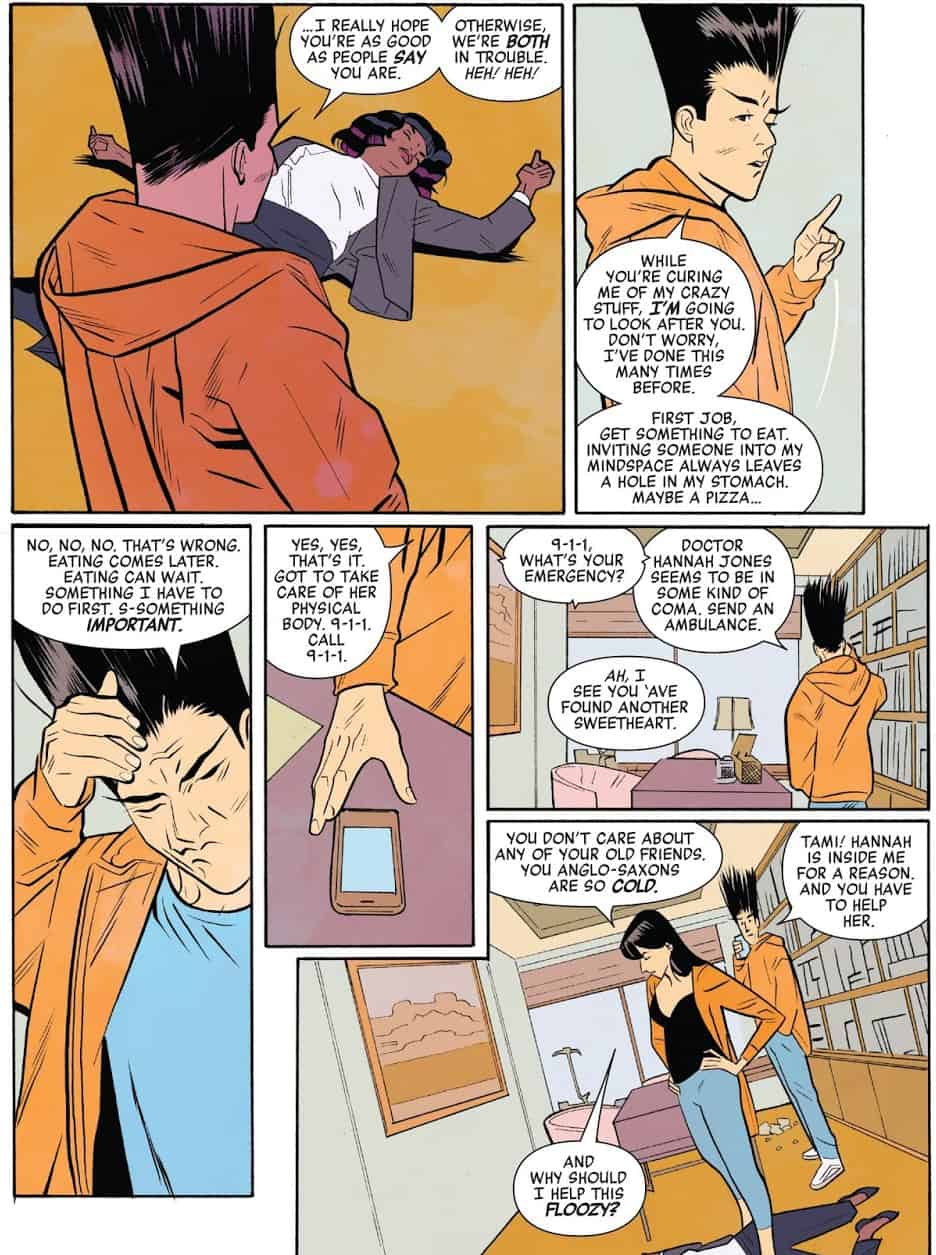 David calls on the assistance of Tammi Haar, one of his stronger persona’s who agrees to help Dr. Jones, because she too, is hiding from Lord Trauma. Tammi knows that if she doesn’t help Jones ‘cure’ David, all will be lost and Lord Trauma will take over David. What ensues afterward is a journey through David Haller’s fragmented mind, similar to what one might describe as a nightmarish Alice in Wonderland meets Hunter S. Thompson’s Fear and Loathing! 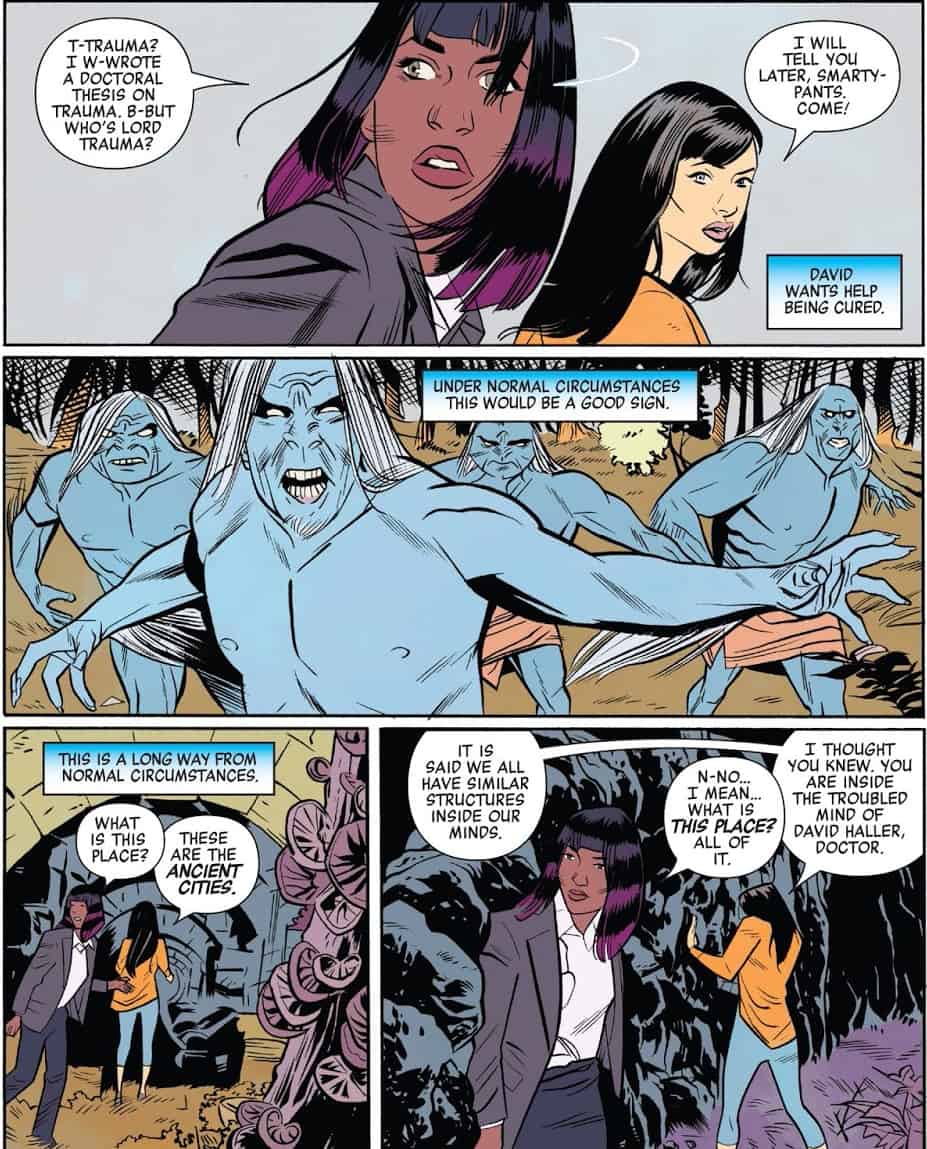 Hanni and Dr. Jones travel through Haller’s mind traveling running from whats left of personas that Lord Trauma has already consumed. Traveling through the corridor of guilt where Haller’s buries his most dangerous memories upon the shores of the nightmare beach where the ocean of nightmares continues to grow larger the more personas that Trauma consumes. 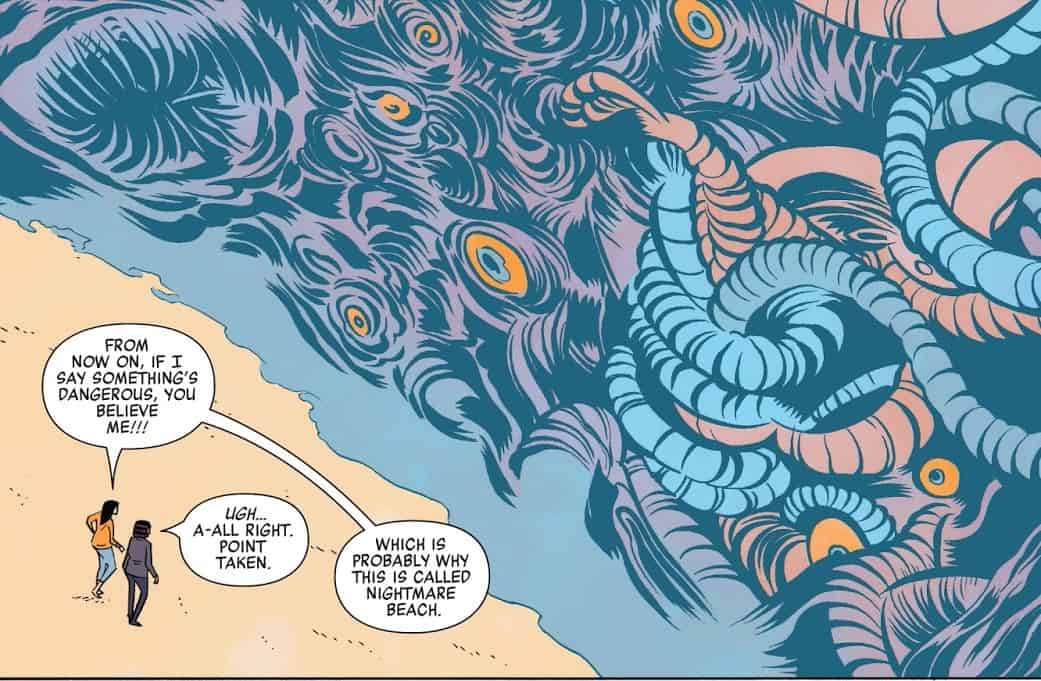 While David does his best to protect Dr. Jones’ physical body, getting her to a hospital, Trauma makes the situation more difficult than expected, leading to a promising cliffhanger of paranoia! 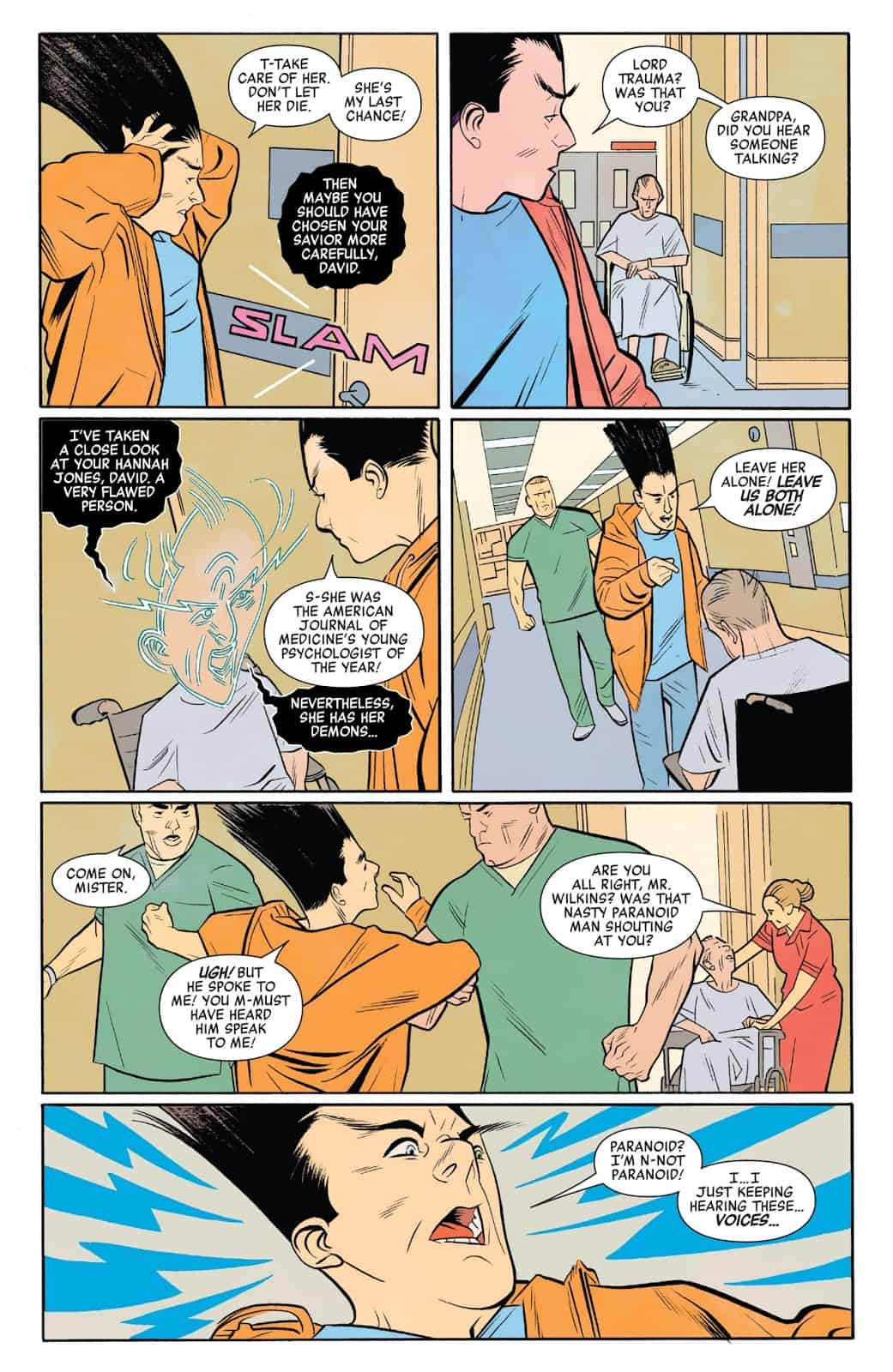 What Just Happened:
While Legion or David, one in the same, or many in the same, convinced Dr. Hannah Jones to help him successfully, even David wasn’t aware of just how much damage Lord Trauma has done. With many of his strongest personas already consumed, and Trauma well aware of Dr. Jones presence in Haller’s mind, Lord Trauma is closer to taking control of David Haller completely, leaving nothing but Trauma running the show.

Final Thoughts:
An interesting read with some delightful imagery of the inside of a power mutant’s mind suffering from multiple personality disorder. Tammi, the self-described ‘nightclub singer and occasional good-time girl’ persona who assist Dr. Jones in her attempt to save David is used by writer Peter Milligan incredibly well. Tammi provides the reader with the primary narrative as well as clues one might use to discern who Lord Trauma is and where his motives derive from. An interesting take on a great character, and as for what’s next for David Haller, Dr. Hannah Jones, and Tammi, as a magic 8 ball might say: OUTLOOK NOT SO GOOD. 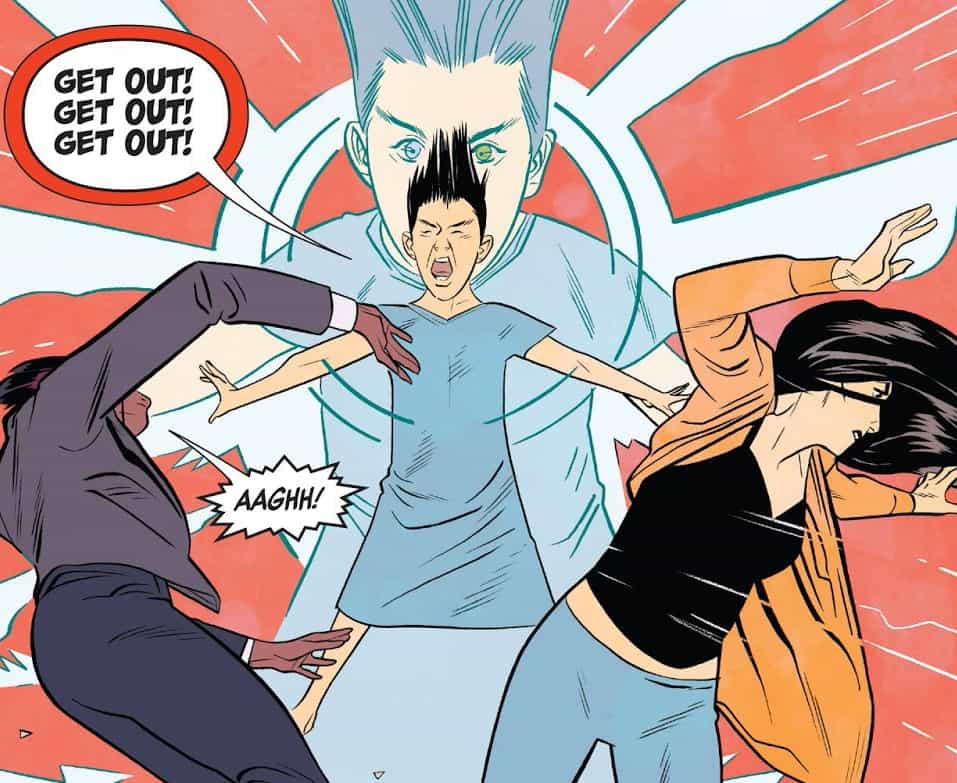 Blackwood: The Mourning After #1: The Rice Krispie Debate
February 16, 2020