New York’s Mayor Wilson Fisk is pushing his anti-vigilante movement and succeeding. Citizens are scared and tired of destruction and danger. So where does that leave Logan, who just got back into town and receives info from a stranger that can take down Fisk? 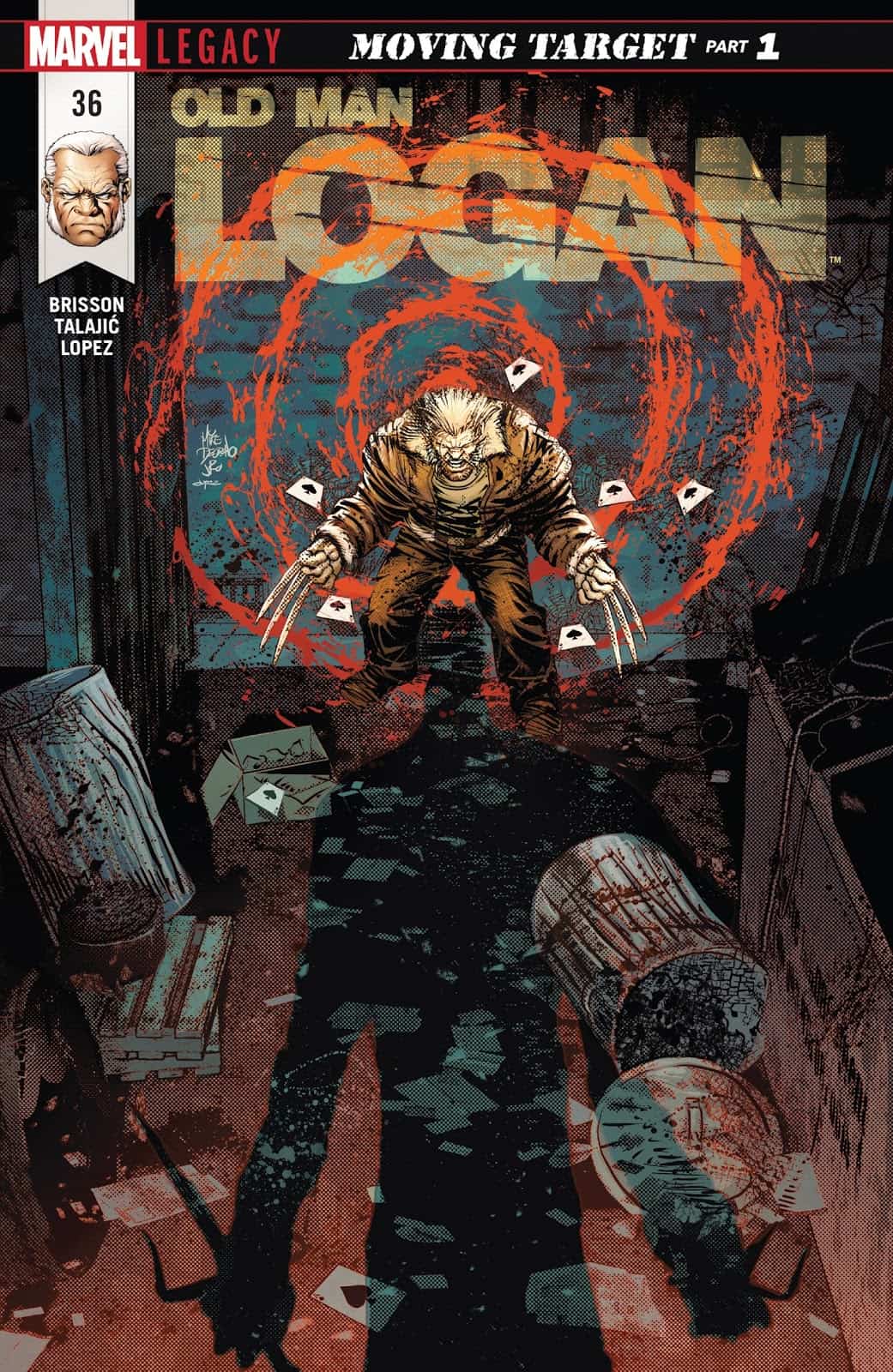 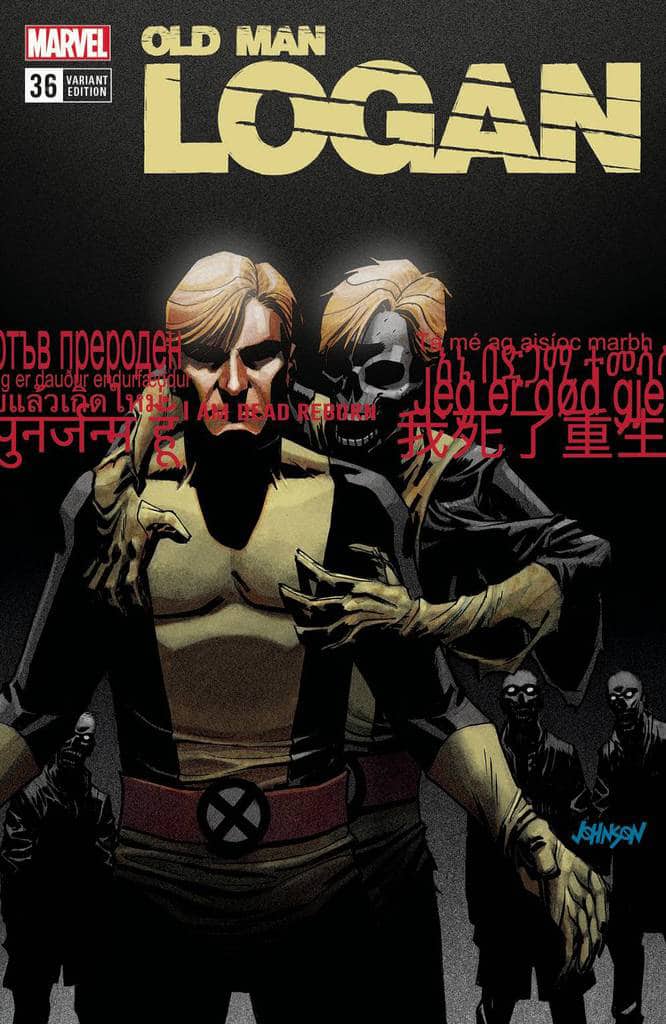 What You Need To Know:
Barely surviving a battle with the Hand, Logan was injected with Regenix, a healing-booster drug with adverse side-effects. It saved his life, but at what cost? His healing abilities were already being pushed past their limits. Now they are deteriorating faster.

What You’ll Find Out:
Back home in New York City, strolling through Times Square, Logan is recalling the fact that he was where it all started: the beginning of the Wastelands, when Mysterio banded the worlds deadliest villains to unite and kill the heroes and take over earth once and for all. They won. 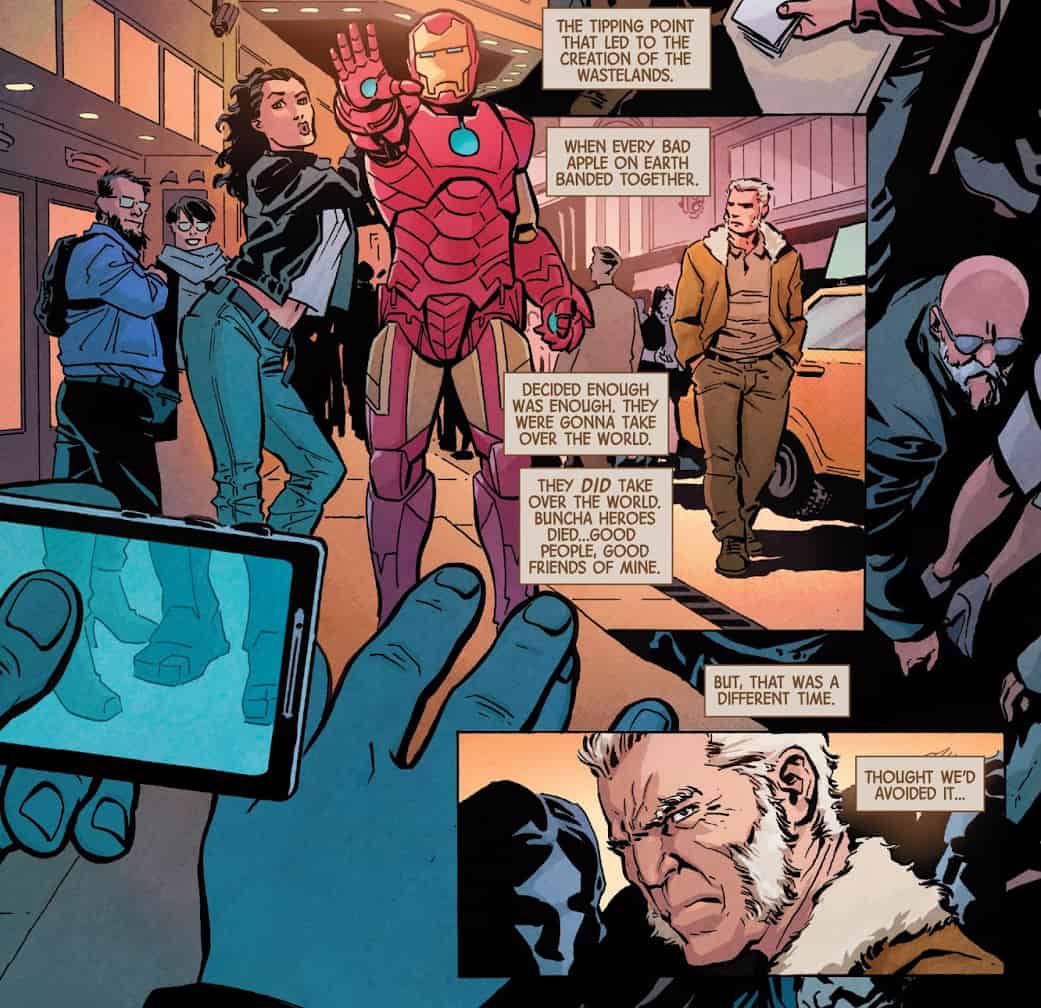 Catching a scent, he heads into a nearby bar for a beer.
The nervous gentleman offers some interesting information. 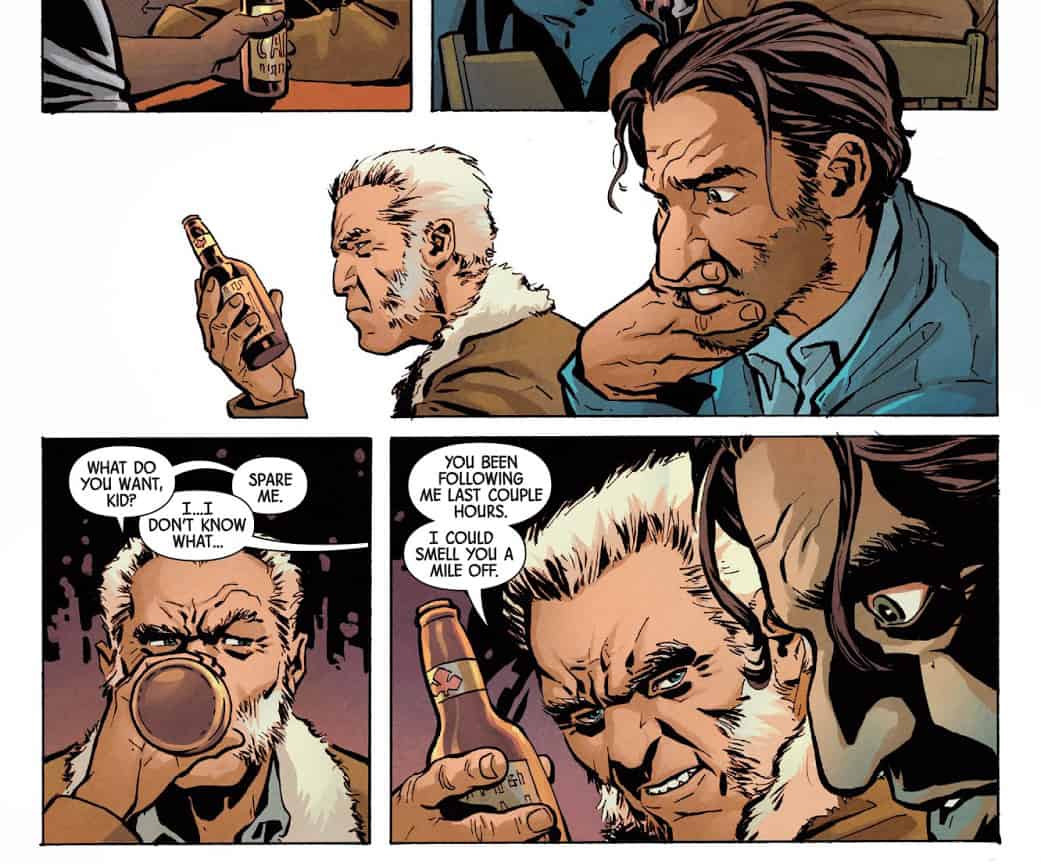 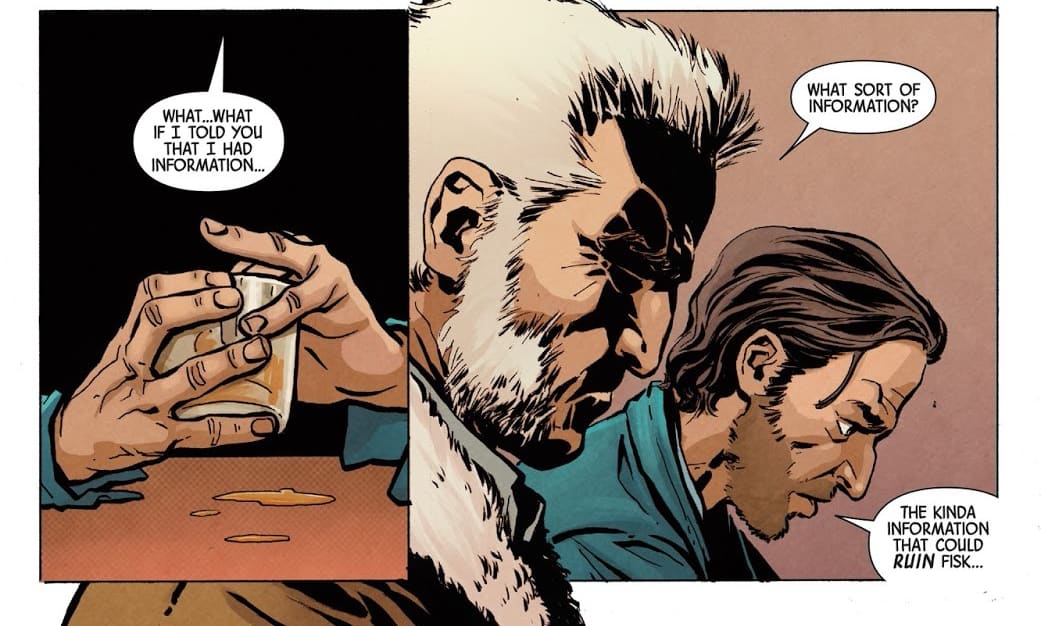 We switch scenes to an Anti-Vigilante rally, featuring Mayor Wilson Fisk delivering more of his rhetoric. Signs in the crowds call for the removal of the X-Men from Central Park. After Fisk finishes his speech, a more pressing matter is at hand. 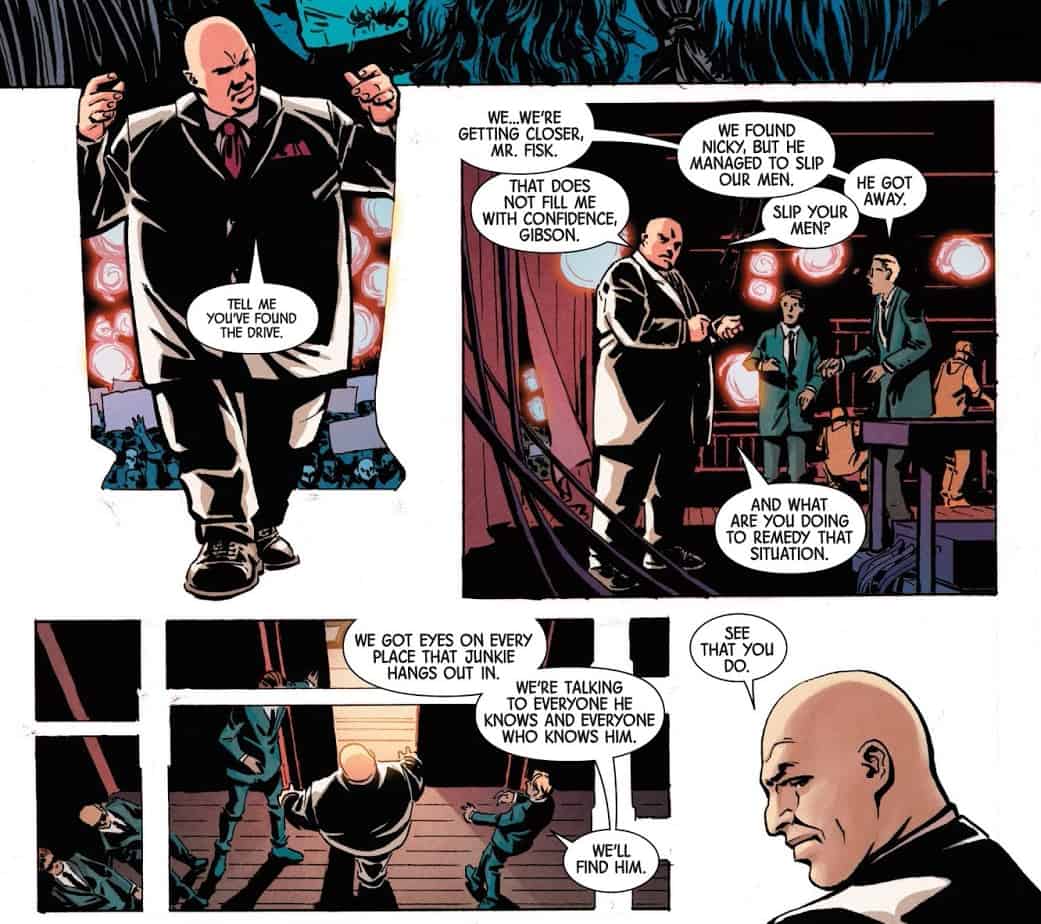 The nervous man, named Nicky, takes Logan to his temporary crash pad to retrieve the flash drive. It’s encrypted, so Nicky isn’t positive what’s even on it. Logan is losing his patience… 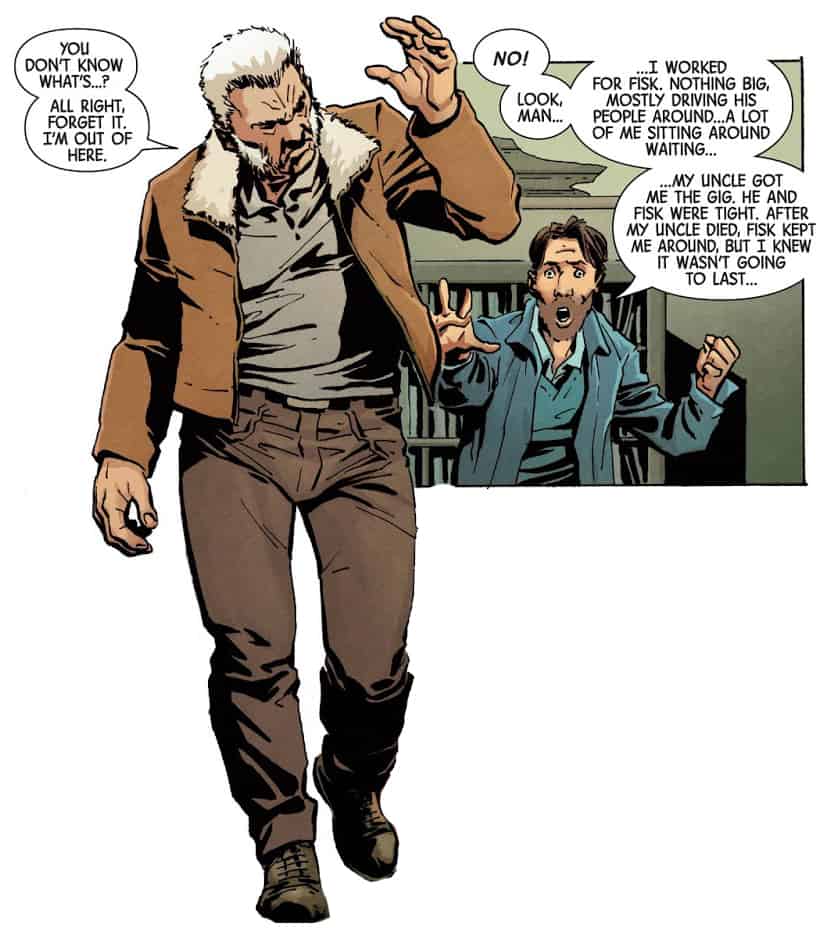 Nicky continues on with his story and Logan decides to get him away from there as soon as possible. They take the subway, which is crammed with people. Scotty has his doubts… 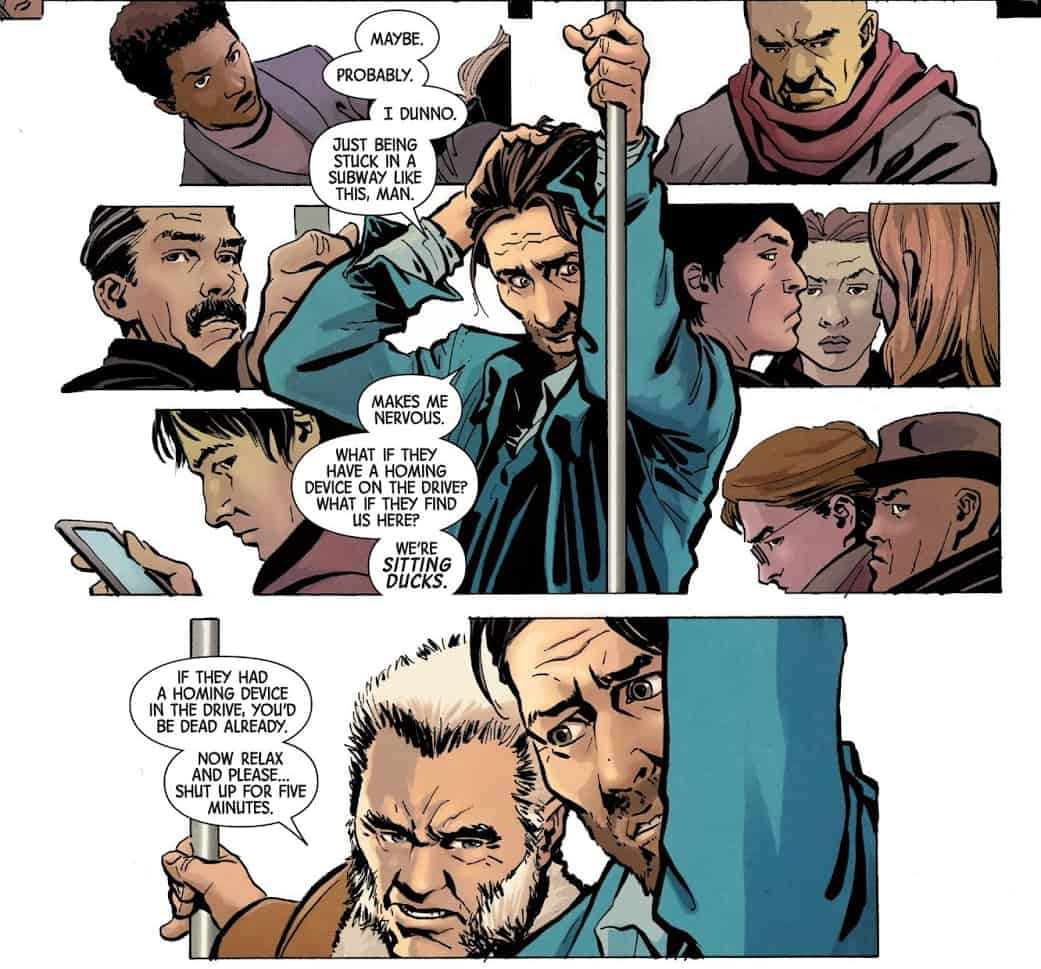 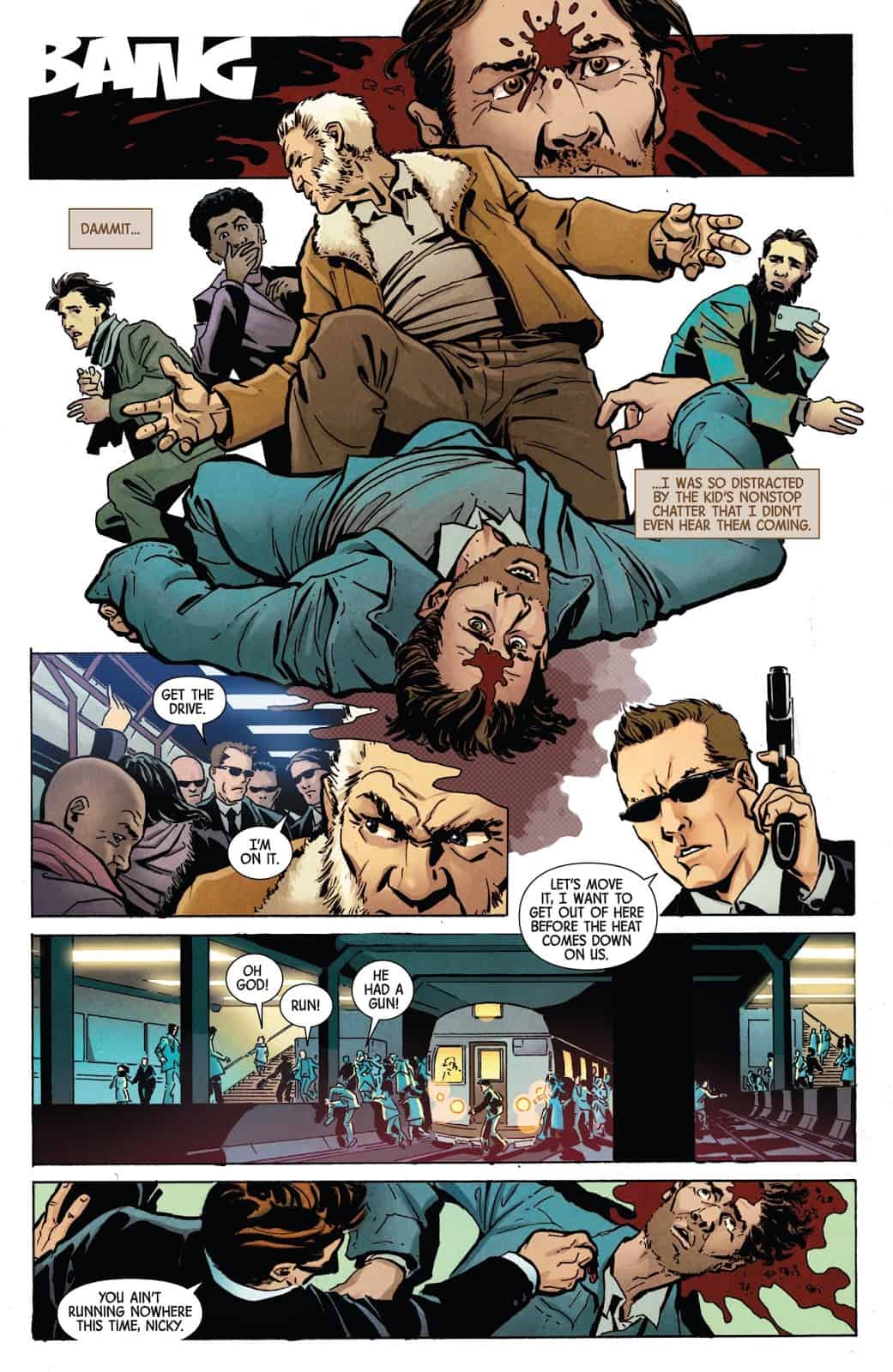 After a scuffle and some slicing up, Logan is able to grab the flash drive and make his escape, but not without one last horrific scene, all caught on a smartphone. 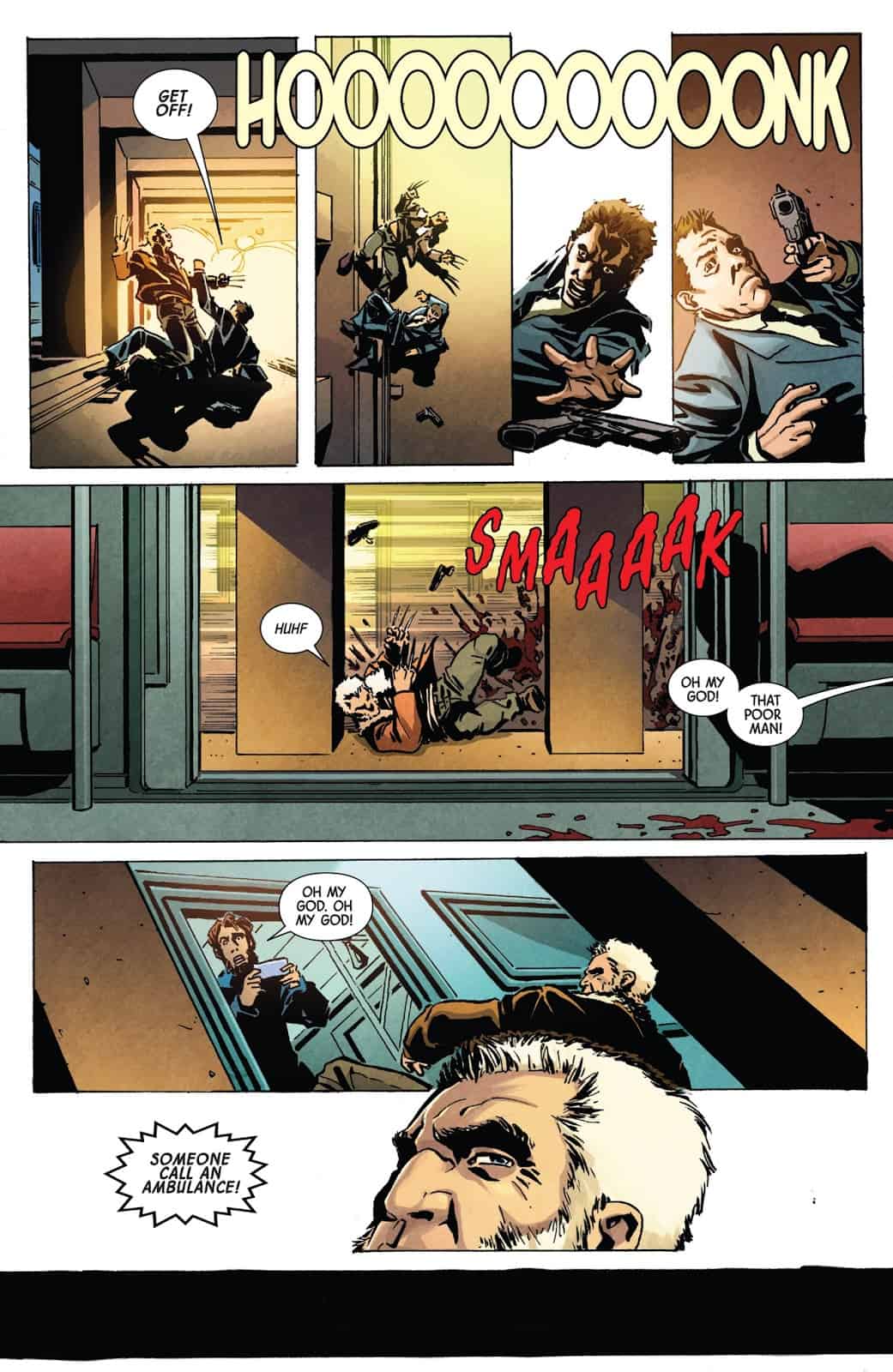 A badly bleeding Logan makes his way into a pharmacy, looking to purchase first aid supplies since his healing factor is ebbing away. 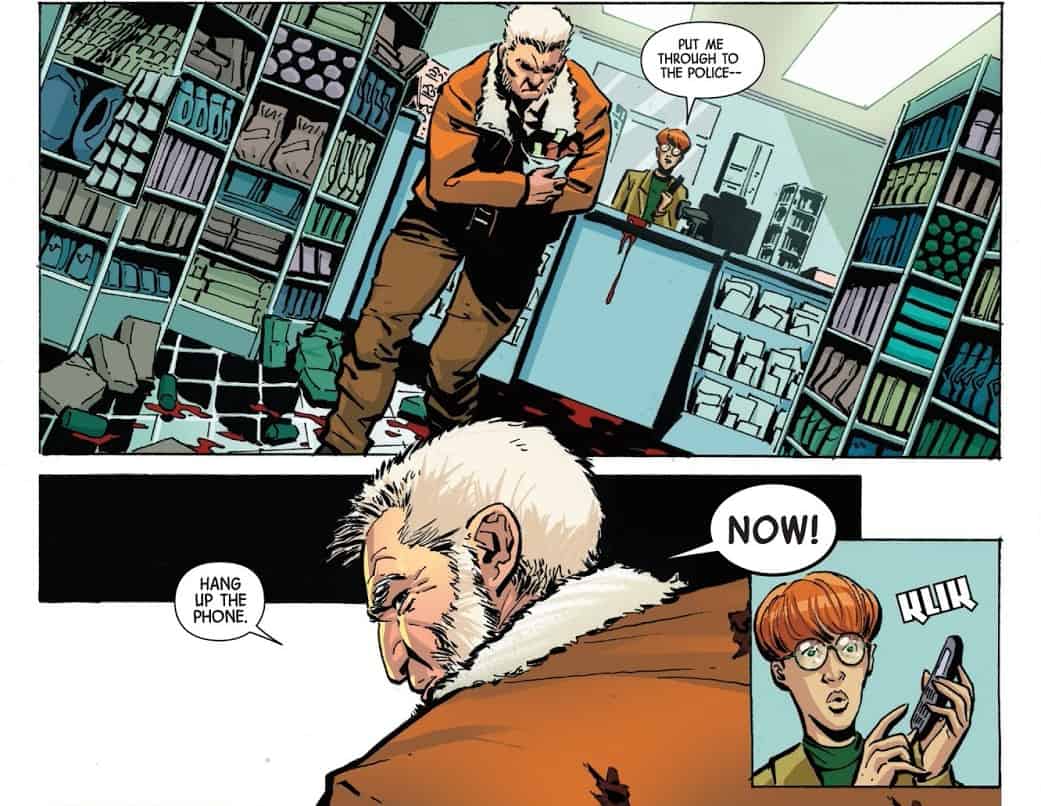 Fisk orders the video footage be recovered. He can’t let this opportunity pass. 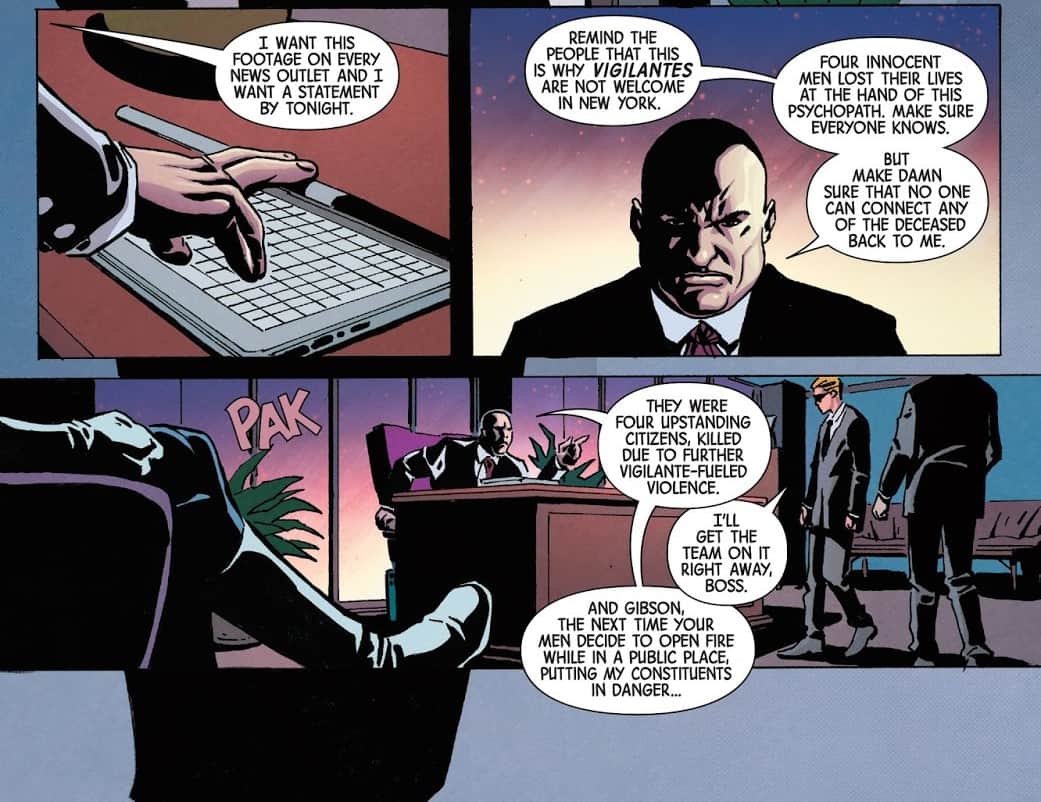 Paper clips begin flying past the Kingpin’s face. And the mysterious guest is given orders. 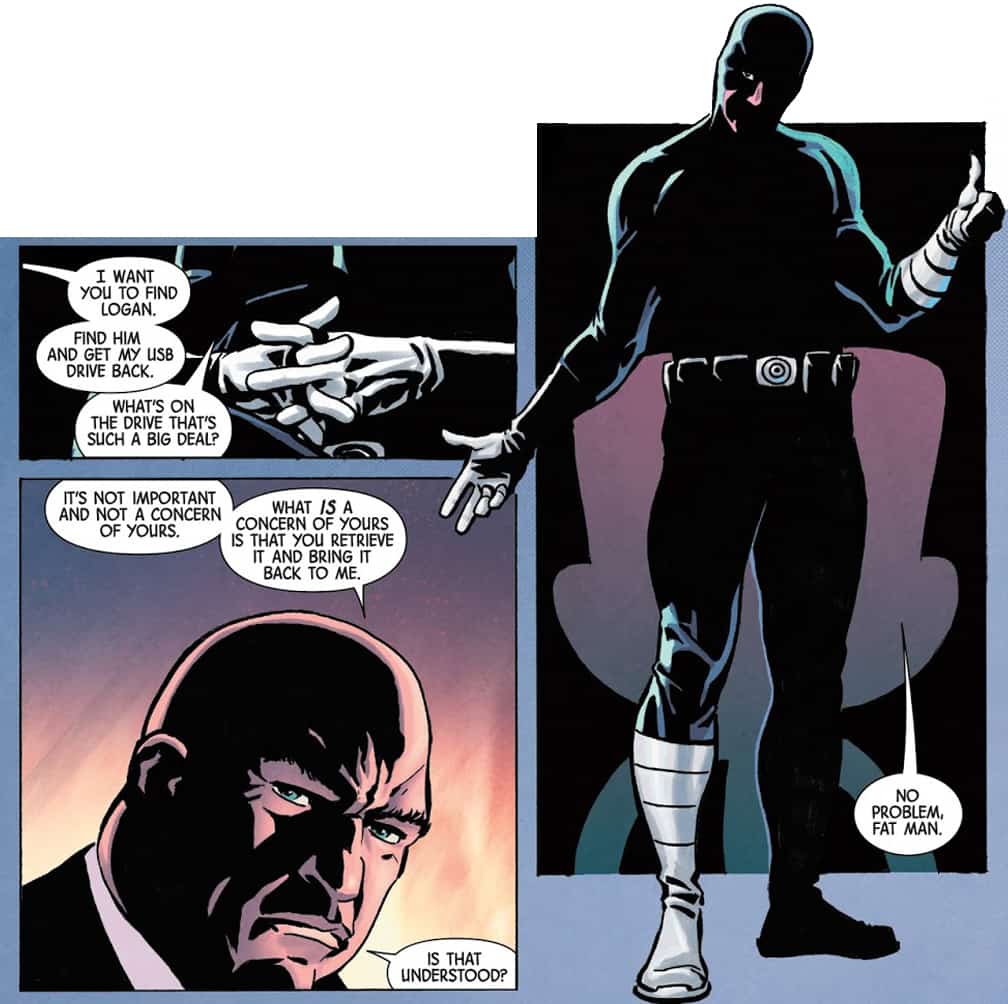 What Just Happened?
Logan should give up walking into bars for beer. They always lead to trouble! Seriously though, I feel so bad for him! Reminiscent of The Incredible Hulk Tv series of the 1970’s, Logan travels from place to place with utter heartbreak in his wake. Poor guy can barely get a beer without some bad stuff happening! Now that Logan has one bone clawed hand, things aren’t looking too bright!

Bringing in Wilson Fisk as the villain in this story, with its political slant is intriguing. I hope it’s followed up in future issues of X-Men Gold, where Central Park is the main setting.

Dalibor Talajic’s style works well with this gritty story, set in NYC. Logan LOOKS tired, he LOOKS exhausted, and in pain, and I can feel it through the page. Excellent work. Kudos to Carlos Lopez on colors! Each set of claws on each hand was colored correctly! It’s all in the details… 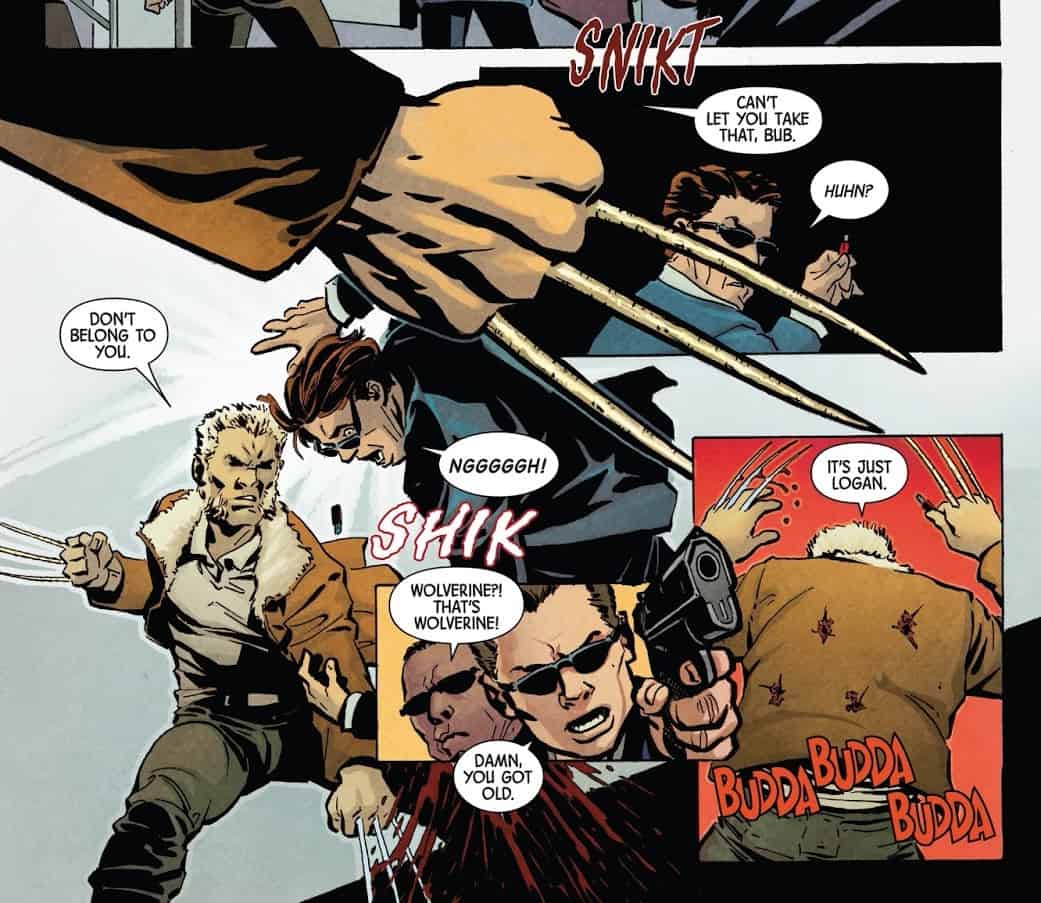 I’m very happy to get my Deodato fix with the gorgeous cover.
Next issue’s cover is so stunning I had to share it here as they do at the end of this issue. Enjoy! 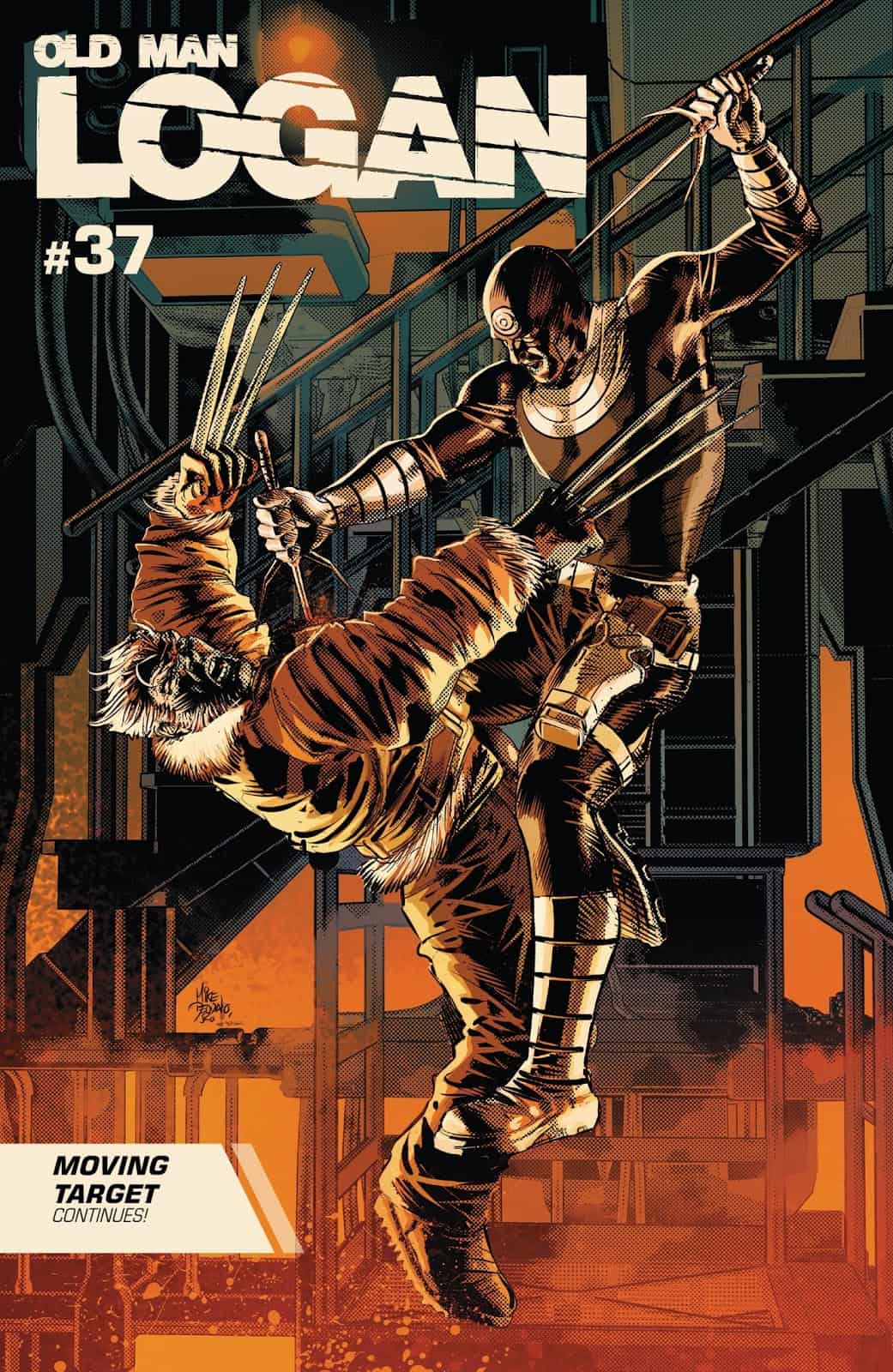 Rating 9/10
Final thought:
Setting Logan up for a battle royal with Wilson Fisk and Bullseye has all the makings of an epic throwdown! What’s on that flash drive???