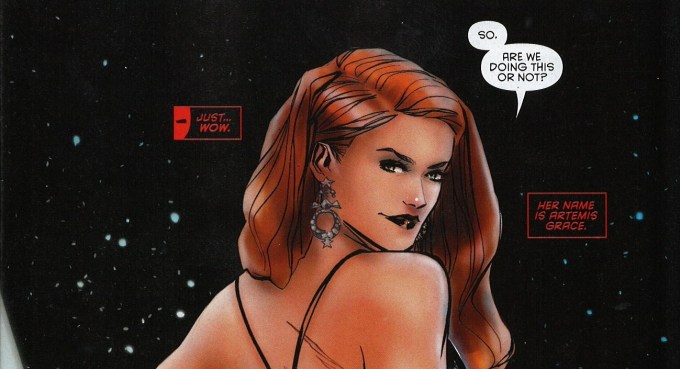 As Red Hood and Artemis go on their first date, more secrets are revealed about Bizarro and his ties to Lex Luthor. 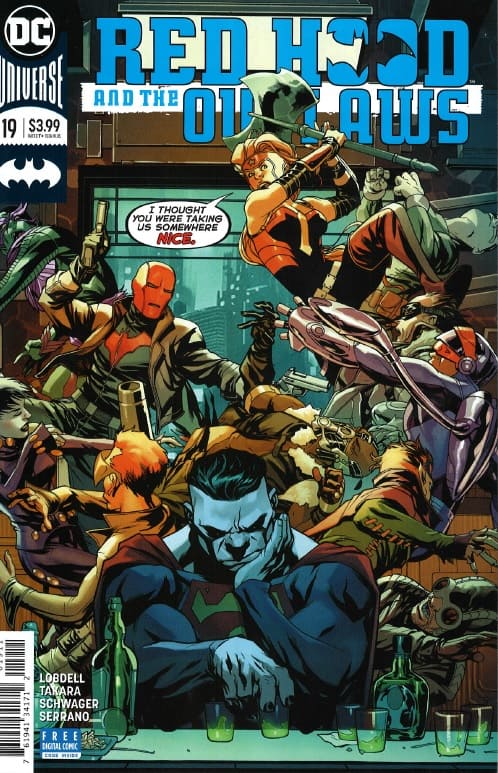 What You’ll Need to Know:
Still unsure of where Bizarro’s loyalties lie after Lex Luthor augmented his intellect in a life-saving procedure, Red Hood and Artemis begin to notice strange and secretive behavior in their Kryptonian friend.

What You’ll Find Out (SPOILERS):
After a dare, Red Hood and Artemis are officially getting ready for their first date out together. 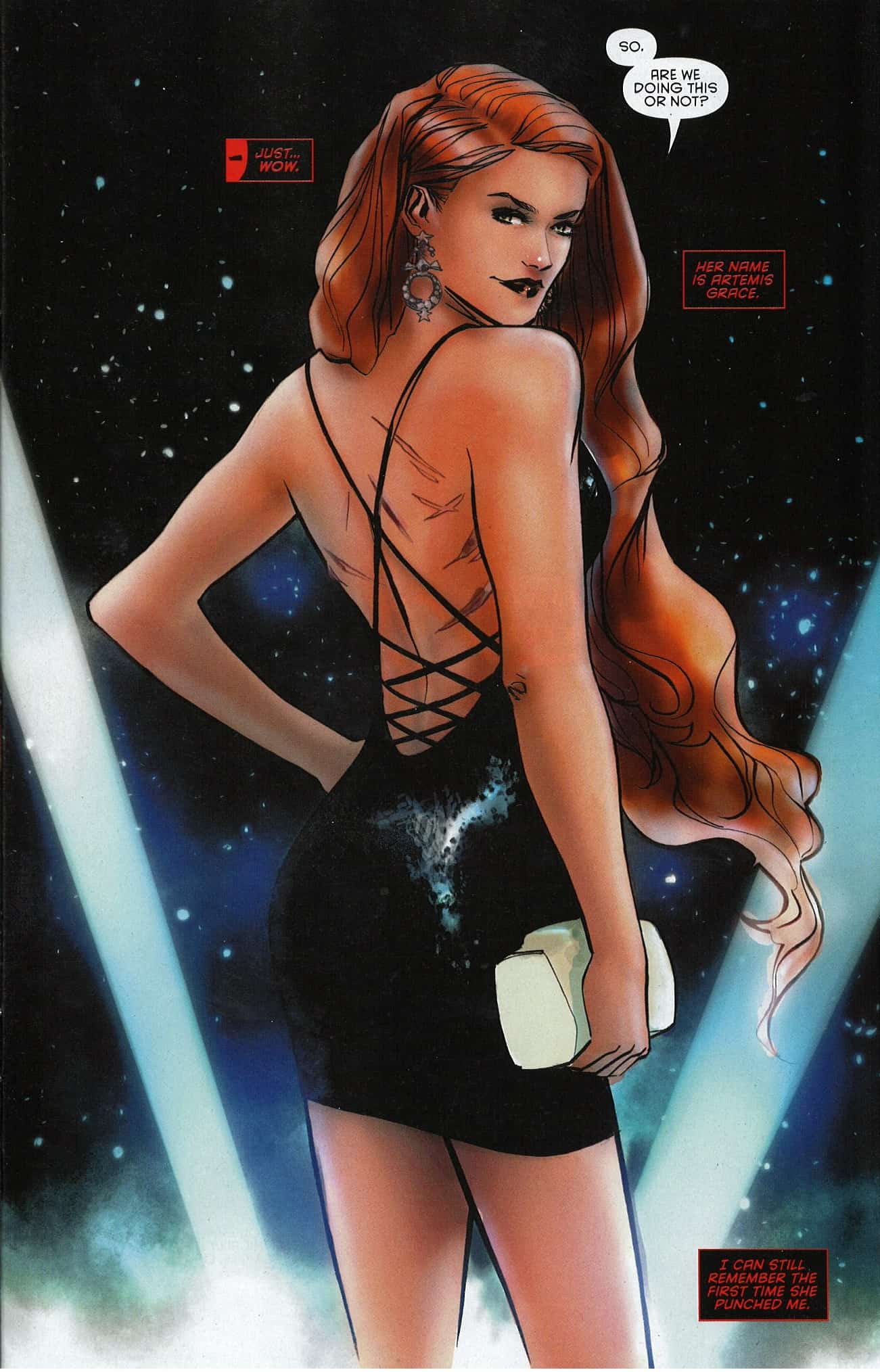 Red Hood is stunned at seeing Artemis dressed for their night out on the town and displays a rare moment of awkwardness. Seeing his friend is not in his element, Bizarro jovially feeds him the necessary lines to say to Artemis so as to not have egg on his face. Bizarro then offers for them to use a car he’s provided on their date. Artemis declines though, saying that they should probably use the teleportation doorway so that they won’t fall into a situation of drinking and driving. While they are out, Bizarro gets into a serious creeper moment as he surveys their every action and conversation made on their date remotely. Nude. Bathing. In liquid Kryptonite. (Like I said, creepy.) 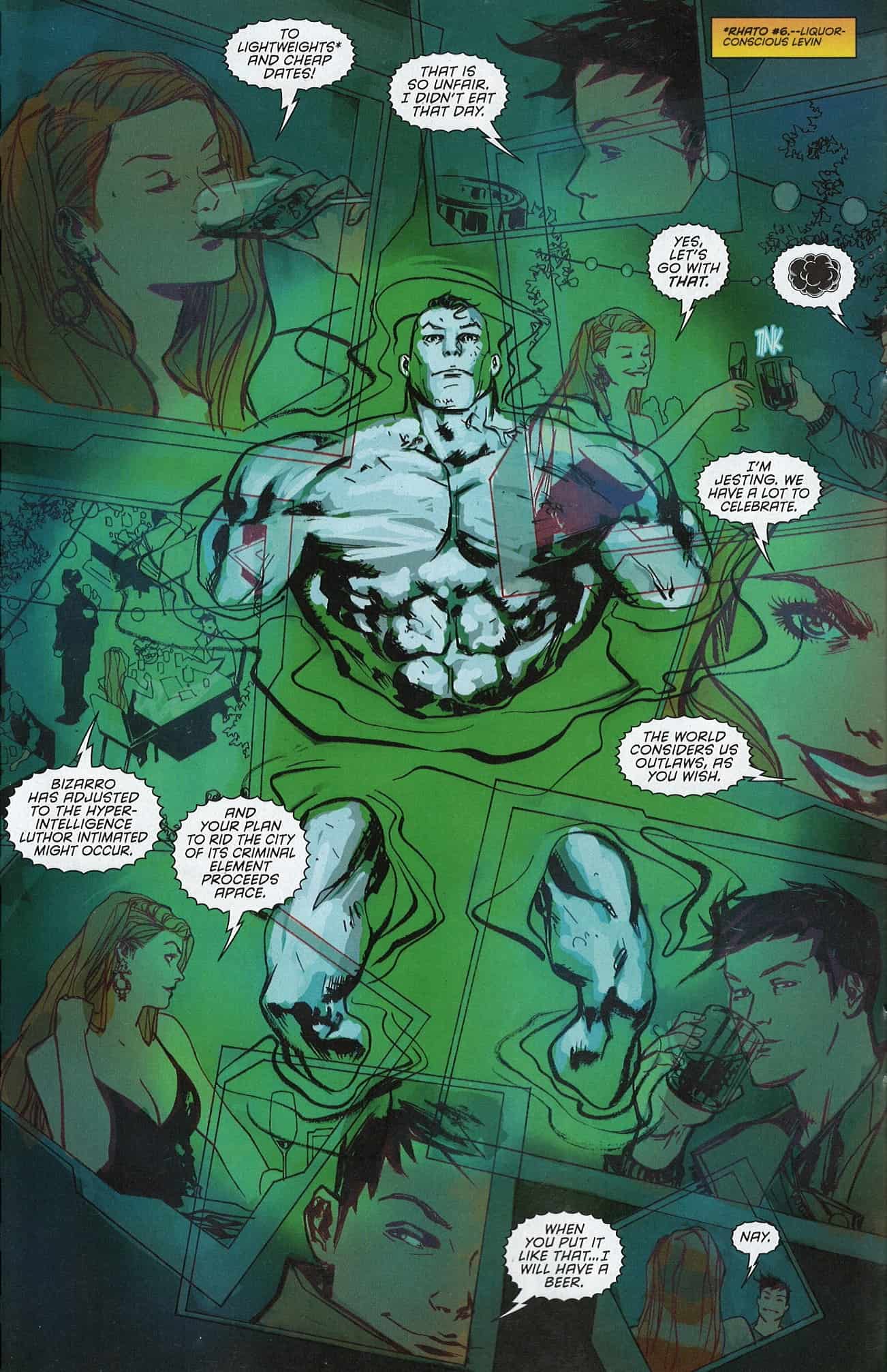 As shown in previous issues, Bizarro’s body chemistry absorbs the liquid Kryptonite, allowing him to retain his newly acquired genius level IQ. Feeling that his more simple-minded persona may return, he is desperate to keep hoarding more liquid Kryptonite to bathe in, but for some reason feels the need to keep this secret activity from his teammates. Just as creepy though, Lex Luthor is also revealed to have been engaging in the exact same creeper viewing as Bizarro, watching every action the Outlaws team members make, but through the eyes of Bizarro. 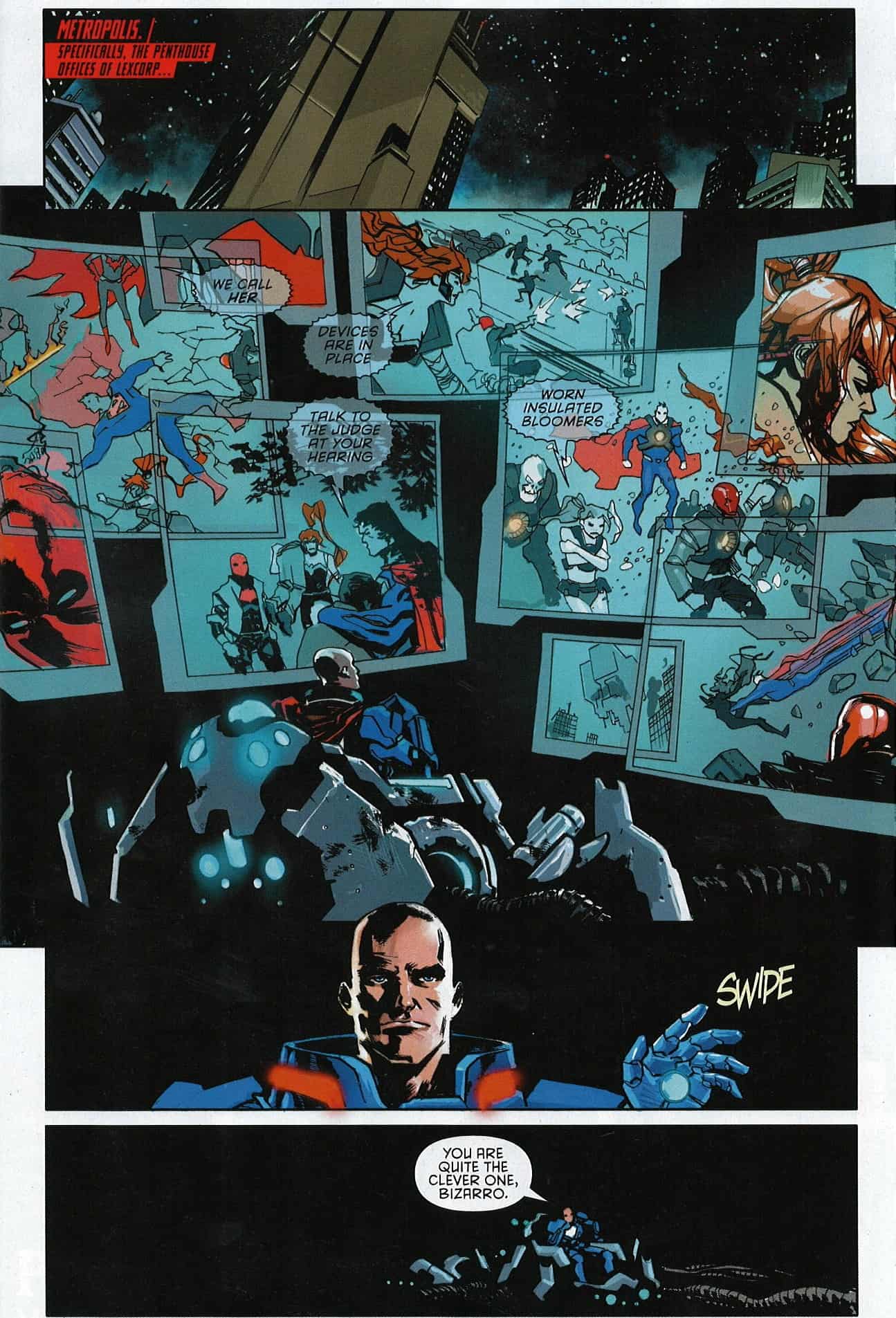 Considering that Bizarro is made up of some of Lex Luthor’s DNA, it makes sense that he’s inherited some of Luthor’s strange voyeuristic tendencies.

As the date goes on, Artemis suggests that they go someplace away from prying eyes. Red Hood takes her to the Bat Cave, which immediately cuts off any remote viewing Bizarro is able to have. After confirming with Red Hood that the Bat Cave is secure, she insists on having a conversation with him via a dry erase board. 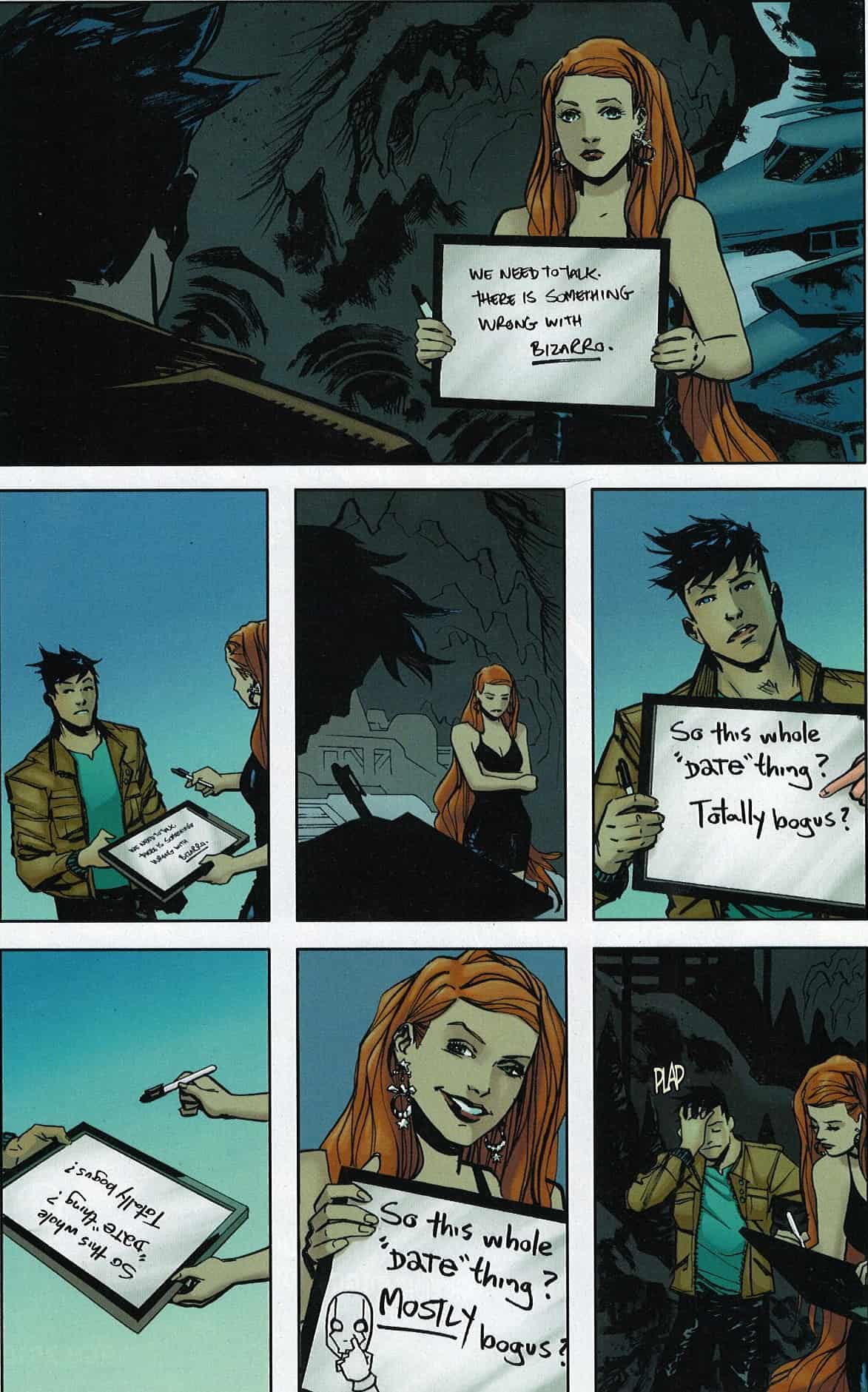 Red Hood is at first let down that the entire date was just an excuse for Artemis to get him alone to discuss Bizarro in private. Artemis eases his apprehension by saying that their date isn’t entirely a sham, just partly. When Artemis brings up that the prior Suicide Squad team-up and other scenarios were staged by Bizarro, Red Hood submits to know this all along. They both agree that there’s something going on with their friend, but agree to allow him his privacy and to let things ride out until they have proof that there is actually anything there to be worried about.

Flummoxed that he’s no longer able to spy on his friends, Bizarro instead notices a warning beacon coming from a criminal meta-human dive bar in Gotham City. Going to investigate, he discovers a strange man waiting for him. The stranger seems to be vibrating at such a fast pace that it looks as if he has three heads. He tells Bizarro that his name is Solitary. 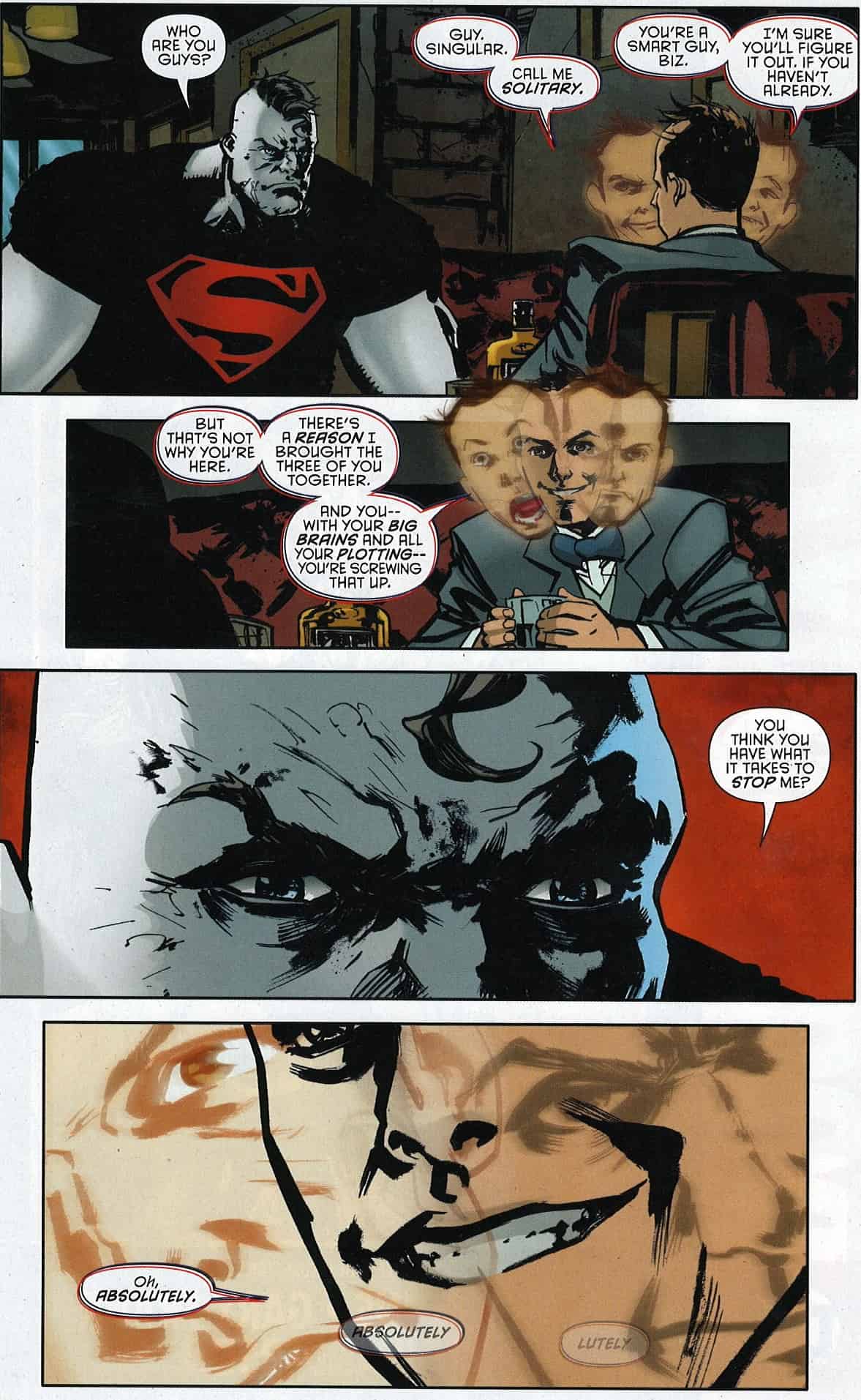 Solitary explains that he is responsible for originally forming the Outlaws from behind the scenes. He also explains that he has a plan for their union, but that Bizarro’s newfound intellect is ruining those plans. Taking his words as a threat, Bizarro asks Solitary if he thinks he can stop him. Solitary says yes, and causes Bizarro to fall to the floor unconscious. He is later awakened by Red Hood and Artemis, now no longer in their date clothes, but in their team uniforms instead. Unsure of what happened to him, they take Bizarro back to their headquarters to get his side of the story.

It’s finally officially revealed that Lex Luthor implanted some surveillance options into Bizarro during his surgical procedure. Thus, he’s been keeping tabs on every action the Outlaws team have made from the get-go. He also seems pleased at just how sneaky Bizarro has become, hoarding the liquid Kryptonite in secret. Having Lex Luthor have ulterior motives in helping Bizarro was something Red Hood and Artemis have suspected, but this is the first time that their suspicions are confirmed. What Luthor plans to do with his new insight into the inner workings of the team though is still up in the air.

Although Bizarro shows remorse for hiding his Kryptonite addiction from his teammates, as shown by his subconscious Pup-Pup persona, the fact that he still refuses to let his friends in to help him speaks volumes.

It was nice to see all of the past flirtatious banter between Red Hood and Artemis finally flourish into an actual date. Artemis’ revelation that she wanted to get Red Hood alone to talk about Bizarro did squash a lot of the romantic build-up happening, but her letting Red Hood know that date wasn’t a total sham shows that the two of them still have a possible future together.

Final Thought: I’ve been a HUGE fan of the Artemis character since her initial introduction in 1994. I also don’t hide the fact in saying that of all the DCU characters, she is my absolute favorite. This has to do with a combination of things, mostly stemming from her past history and growth over the years as a character. During her entire run though, I must say, she has had very little romantic ties. There was a one-page insinuation by writer/artist John Byrne that she may have had a past with the New God character Kanto; and in another issue he wrote yet another one-page “maybe” moment for Artemis, this time with the Wonder Woman minor character Mike Schorr. 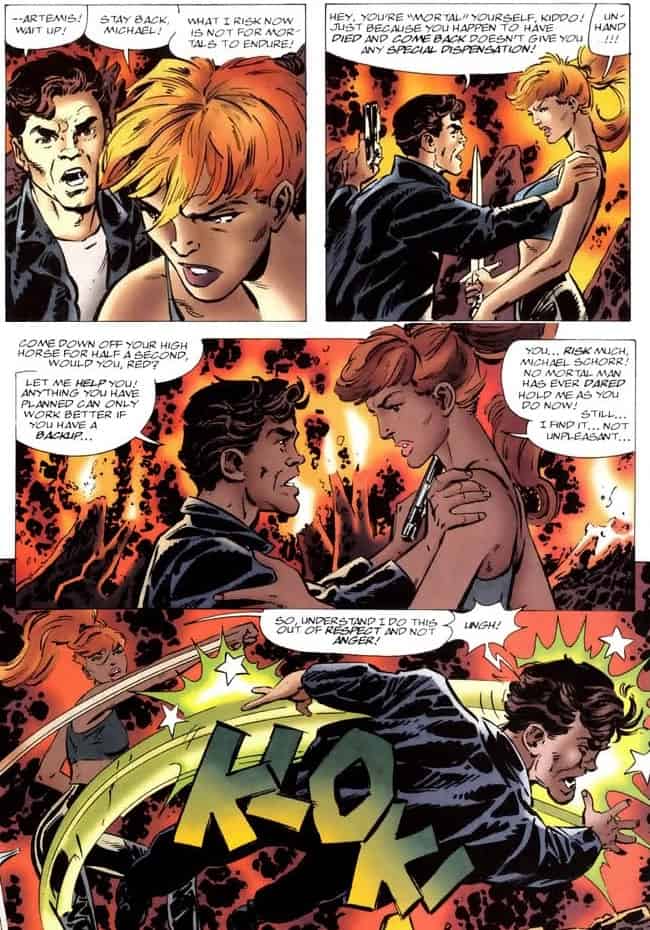 Later in her solo mini-series, writer William Messner-Loebs then showed that Artemis had a potential romantic interest in her Hellenders teammate Sure-Shot. Ultimately though, nothing happened with any of these suggested pairings. Which is why I’m SO happy at the romantic turn of events happening in the Outlaws comic.

Writer Scott Lobdell not only gave Artemis one love interest, but two. First, he didn’t shy away from showing that in a culture of only Amazon women, that there will be some obvious same-sex pairings. Artemis’ relationship with fellow Bana-Mighdall Amazon Akilla showed this beautifully. You may be saying to yourself that “this is just so obvious”, but you have to consider that DC editorial has had strict control on exactly which of it’s characters can be shown in official LGBT relationships and which ones can’t. Back in 2003, writer Greg Rucka attempted to create an official romance between Wonder Woman and a fellow Amazon sister of hers named Io. While you can totally see the intensity of their love of each other in the many scenes Rucka had created for them, he was never allowed to make the two characters an official couple by the Powers That Be. In fact, DC Comics squashed any possible relationship feelings that may’ve lingered by having Diana instead begin dating the male spy character Nemesis during writer Gail Simone’s run. So to see Artemis, a once reigning Wonder Woman herself, being shown with romantic ties with Akilla was so ground breaking for me, and I’m sure, to many other readers.

Now we are able to see her interest in Red Hood start to flourish and take off. I’m not game to see my favorite comic characters coupled off just for the sake of having them in a relationship. I do, though, like it when I see that the characters I’m invested in are treated with respect and have their ties to other characters happen organically and over time. (Are you listening, John Byrne?) Scott Lobdell did this wonderfully in the case of Artemis and her two loves. Although Akilla’s time with her was brief, we are able to still see a long term flirtation with Red Hood change and transform into something stronger. As a fan of both the characters and the comic, I’m ecstatic to see where the two of them are led story-wise. All too often Artemis has been seen as just a hard warrior. Thank you Scott Lobdell for showing us an Artemis that can also be soft and funny at times, and most importantly, capable of love.