Dan Slott’s final story continues as the Green Goblin and Carnage begin the first part of their plan to destroy Spider-Man once and for all. 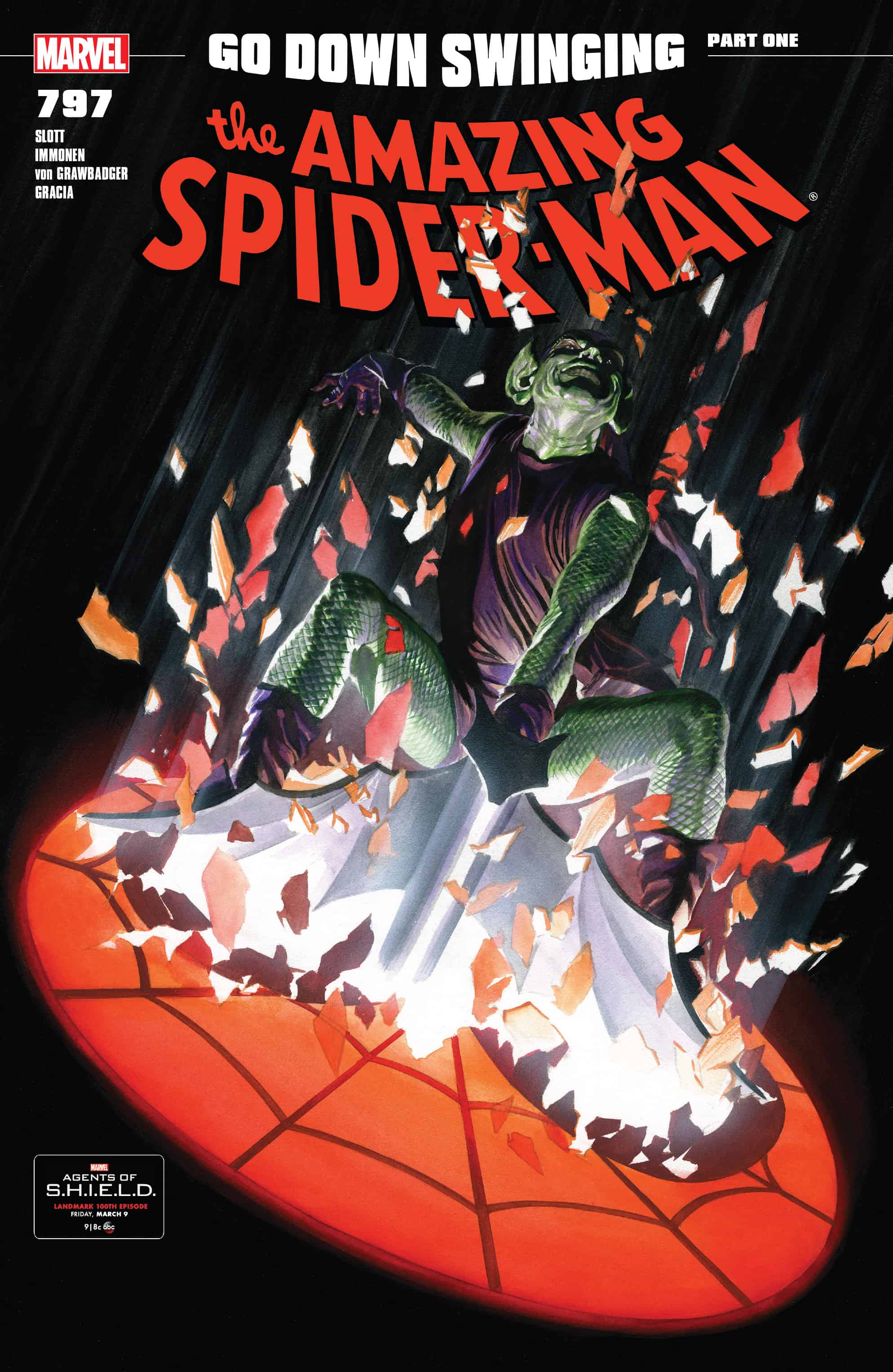 What You Need to Know:
“Go Down Swinging” is a new multi-part series following “Threat Level Red” and continues the ongoing arc of Dan Slott’s final story as head writer for the Spider-Man series. In the previous issue, Norman Osborn and the Carnage symbiote have reached an agreement to work together and Osborn is free of the nanites that prevent him from becoming the Green Goblin and begins his plot to take down Spider-Man. Spider-Man for his part engaged in a failed attempt to stop Phil Urich/The Goblin King from taking Alchemax’s Tritium, even with the involvement of Flash Thompson/Anti-Venom. Afterwards, Peter is reunited with his old flame, Mary Jane Watson.

What You’ll Find Out:
The issue begins in media res as Norman Osborn presents his monologue to his hostage at his abandoned gentleman’s club, with the subject on figuring out Spider-Man’s secret identity. 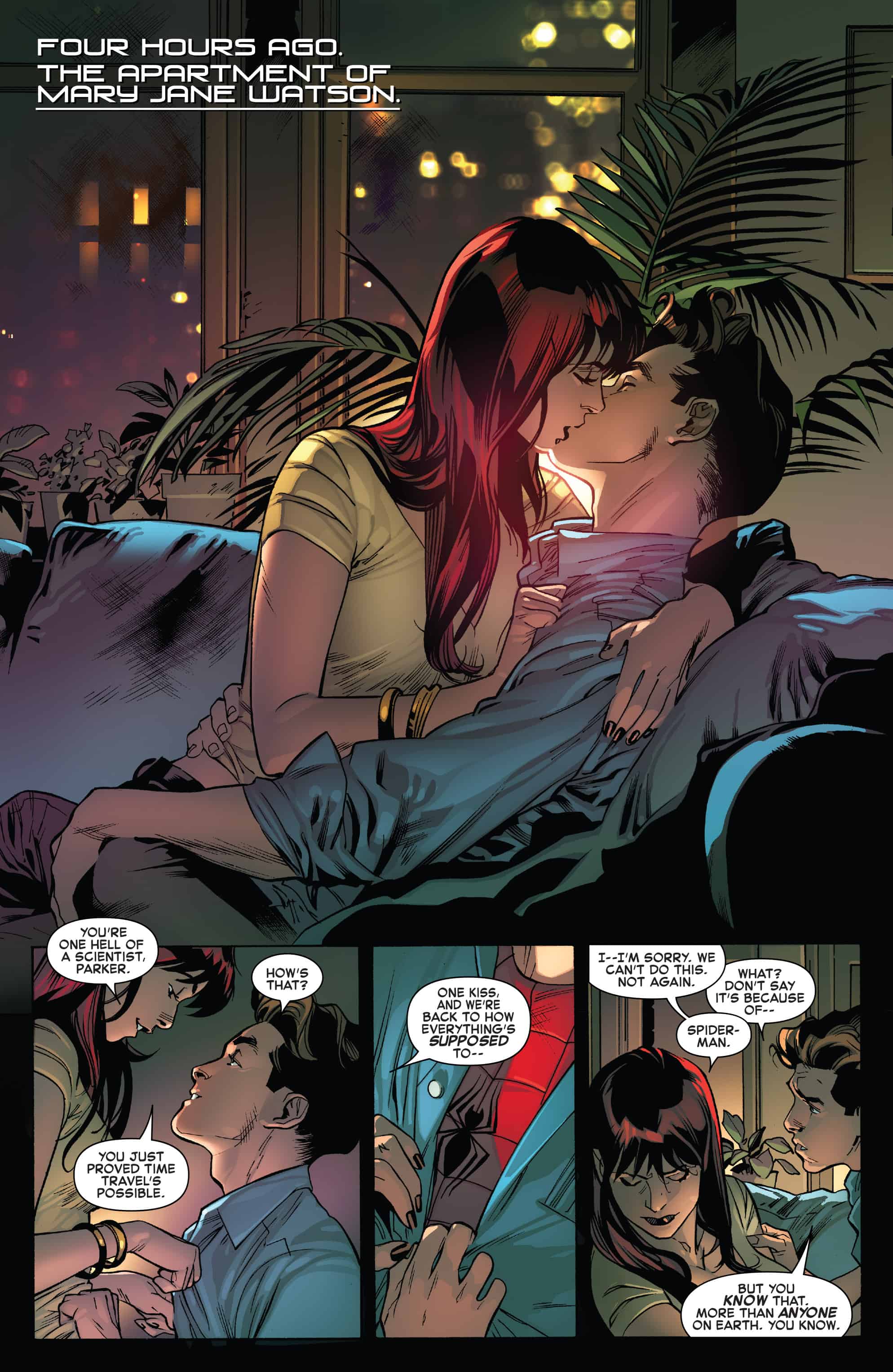 Prior to this, Peter and Mary Jane had a brief romantic moment before it was ultimately called off, citing that Peter’s role as Spider-Man takes priority, thus ending any chance of the two coming back together. As Spider-Man leaves MJ’s apartment, he is unaware that he is spotted by Norman in the distance.

At the Daily Bugle, an argument ensues on whether or not the publisher reveals Phil Urich as the Goblin King, given that he is related to current Bugle head Ben Urich. J. J. Jameson continues to nag to Peter for his lack of escapades that he can write on his blog. While in Alchemax, Liz requests Flash Thompson’s help in tracking down the Goblin King and bring back the stolen Tritium. But Flash refuses and leaves. 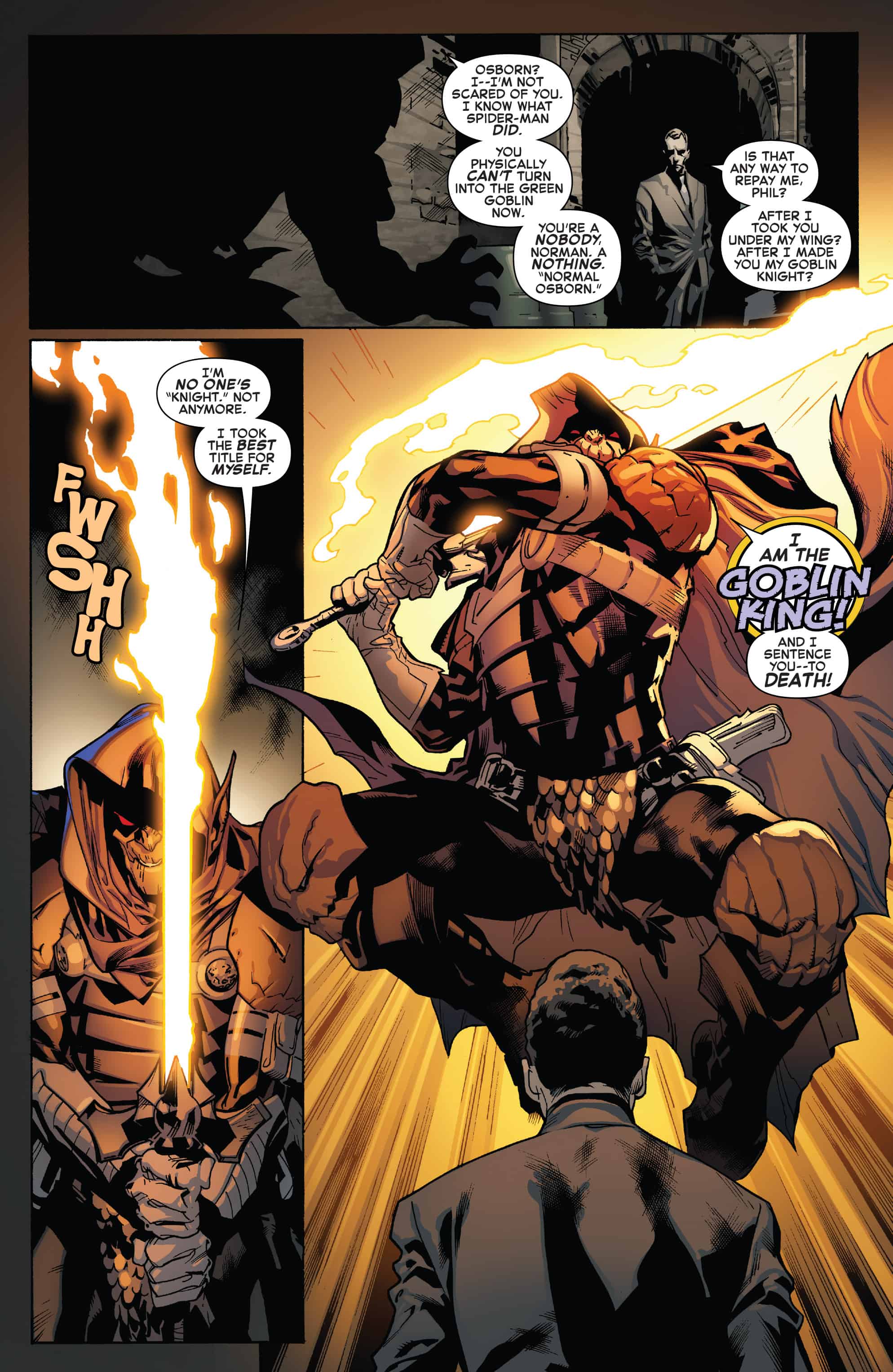 The hostage berates Norman and saying that Spider-Man will beat him no matter what. He then slips his tongue in saying the Goblin threw Gwen Stacy off the bridge, which allows Norman to conclude that Peter Parker is Spider-Man. The issue ends with the hostage lamenting what he has done, who is revealed to be Jameson himself.

What Just Happened?
Although we start with a new multi-part series “Go Down Swinging”, it still is a continuation of the arc Dan Slott began with “Threat Level Red”. And while it still follows the same plot-based formula we see in the last three issues (though in media res), the overall plot is moving forward. Despite the issue being 20 pages long, the pace does give the illusion a lot is going on and doesn’t feel rushed at all.

Those clamoring for a reunion of Peter and MJ and probably a realization of Renew Your Vows will be very disappointed that it’s not happening. From MJ’s standpoint, her reasons do make sense. Peter’s role as Spider-Man takes priority.I haven’t read far back to know how much of a diva Liz Allan is, and I really like this persona. If she hasn’t been made a supervillain yet, whoever’s replacing Dan Slott as head writer should do so. It would make an interesting scenario on how Peter deals with Liz Allan, or maybe have Flash deal with her or even Miguel O’ Hara/Spider-Man 2099.

The Goblin King’s involvement with the Tritium last issue is a red herring as he’s pretty much offed by Norman. This makes me believe whatever Phil was plotting with the Tritium, it may likely continue as a separate story, probably when Anti-Venom starts his own series. Not ruling out that it may still continue within the pages of Spider-Man, given the structure Slott has been doing in these past issues. The issue also didn’t reveal how Norman got to J.J., but that’s a minor complaint.

Final Thoughts:
Gears have gone up the notch in this arc of Spider-Man and it is starting to get good. Slott’s teasing of Red Goblin is over and what Norman discovers would be a turning point for Peter Parker. We can expect a major change in the Spider-Man lore once this is over – thus the fitting title “Go Down Swinging”.