REVIEW: TMNT #79 (Grounded! or The Wrong Side of the Sewer!)

The Triceraton are invading Manhattan, and the Turtles are Grounded! Bummer man, can the Turtles stop the invasion without The Triceratons destroying the city? And What will they think of the Alliance between Agent Bishop and the Foot Clan? 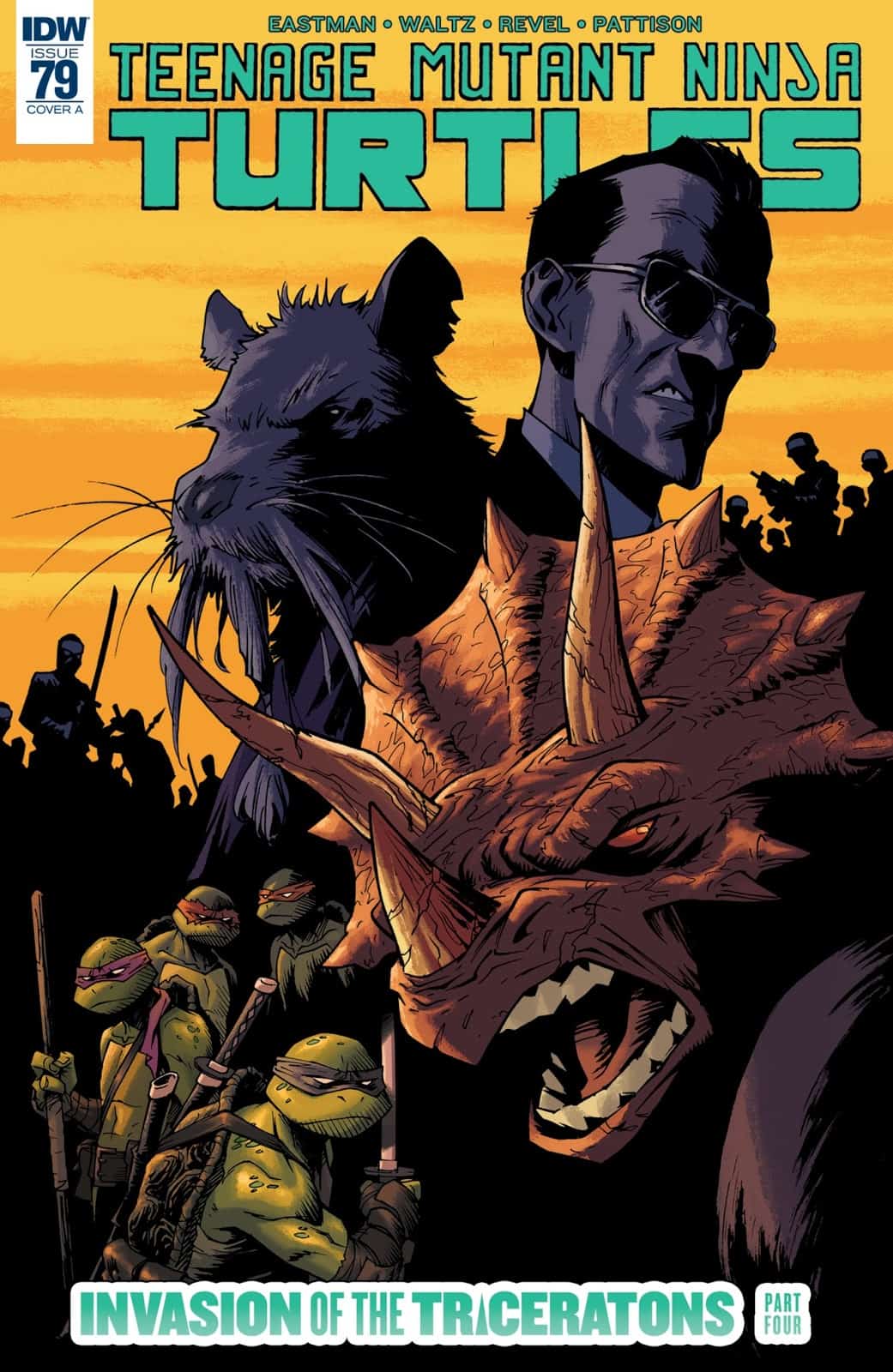 What You Need to Know:
The city is under attack from the Aliens race the Triceraton. Their commander Zom is a friend of the Turtles, and they had been granted the Earth for their cooperation in a recent Space trial for the war crimes of General Krang. We find out that they originally came from Earth, but were removed by an alien species, and eventually evolved into the beings we see today.

The Turtle in an attempt to gain aid, went to the Foot Clan to plead with Master Splinter. In a turn of fate, Splinter refuses their request and confines them to the Foot Headquarters to keep them safe, and out of trouble.

Raph is none too pleased with his father’s actions, nor his choice of companions.

The O’neils try to make it through the War-torn city to get to Baxter Stockman’s Lab, and safety. They know that April will be there and it is the safest spot in the city to wait out the carnage. 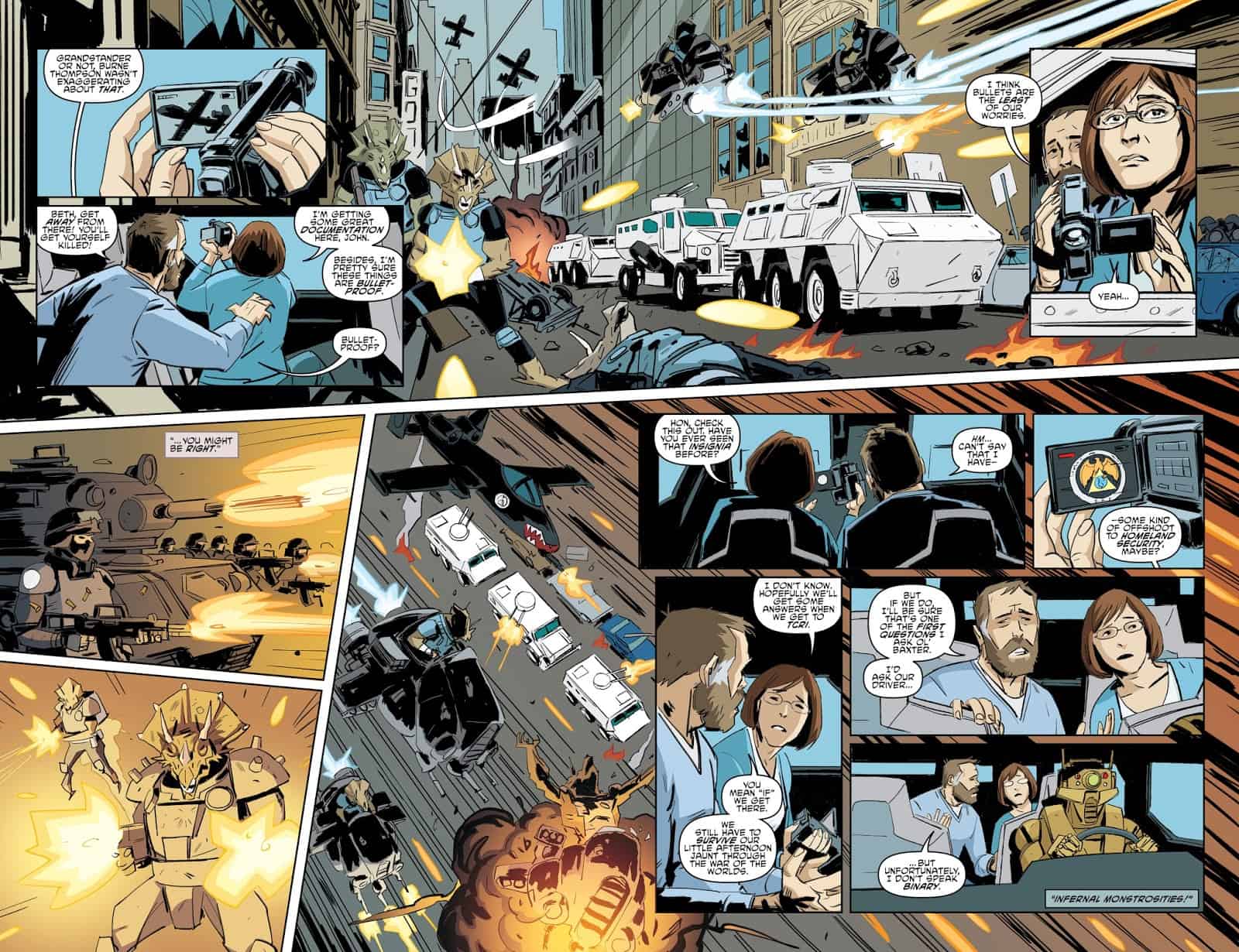 What You’ll Find Out:
Bishop is using Slash to take out the Triceraton by hand. He uses his tech to control the powerful mutant. Bishop is not afraid to get his hands dirty in the field. 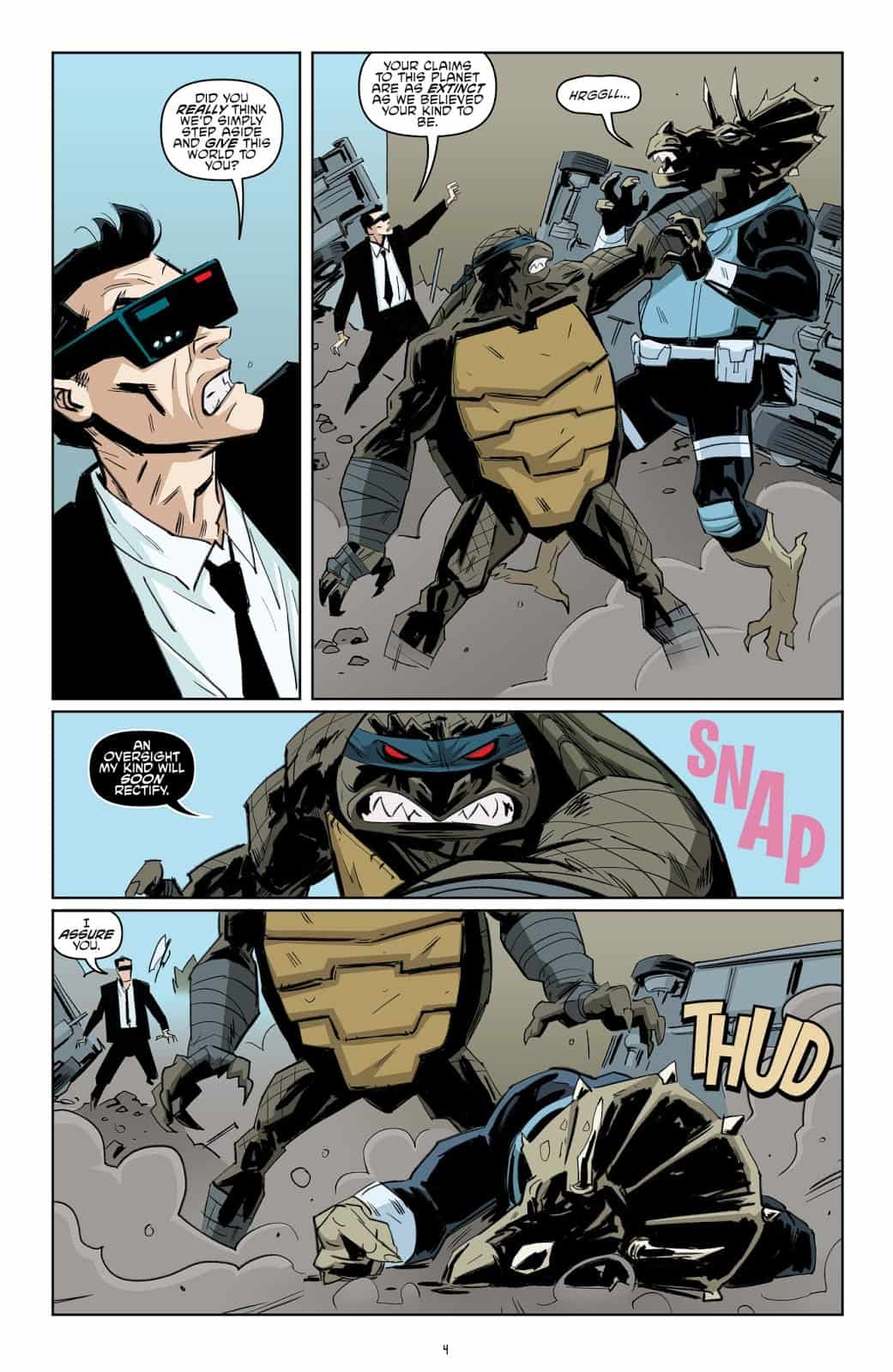 Raphael pleads with his father Splinter to let them help and save the city. He tells Splinter that he cannot be a Clan Master and a Father separately, that there must be a difference because they are opposing forces. Splinter threatens them and confines them to the headquarters. Leo tries to appeal to him, and he insults the Turtle’s Leader and attempts to goad them into a fight. They know better, unfortunately, and they instead appeal to Splinter’s second in command Jenny.

Michelangelo, says that a recent friend who was a Psychologist (See the TMNT/Ghostbusters #2) taught him about how everyone is human and capable of making the wrong decision or a mistake. In an aloof manner, Jenny agrees and tells the Turtles how to escape. 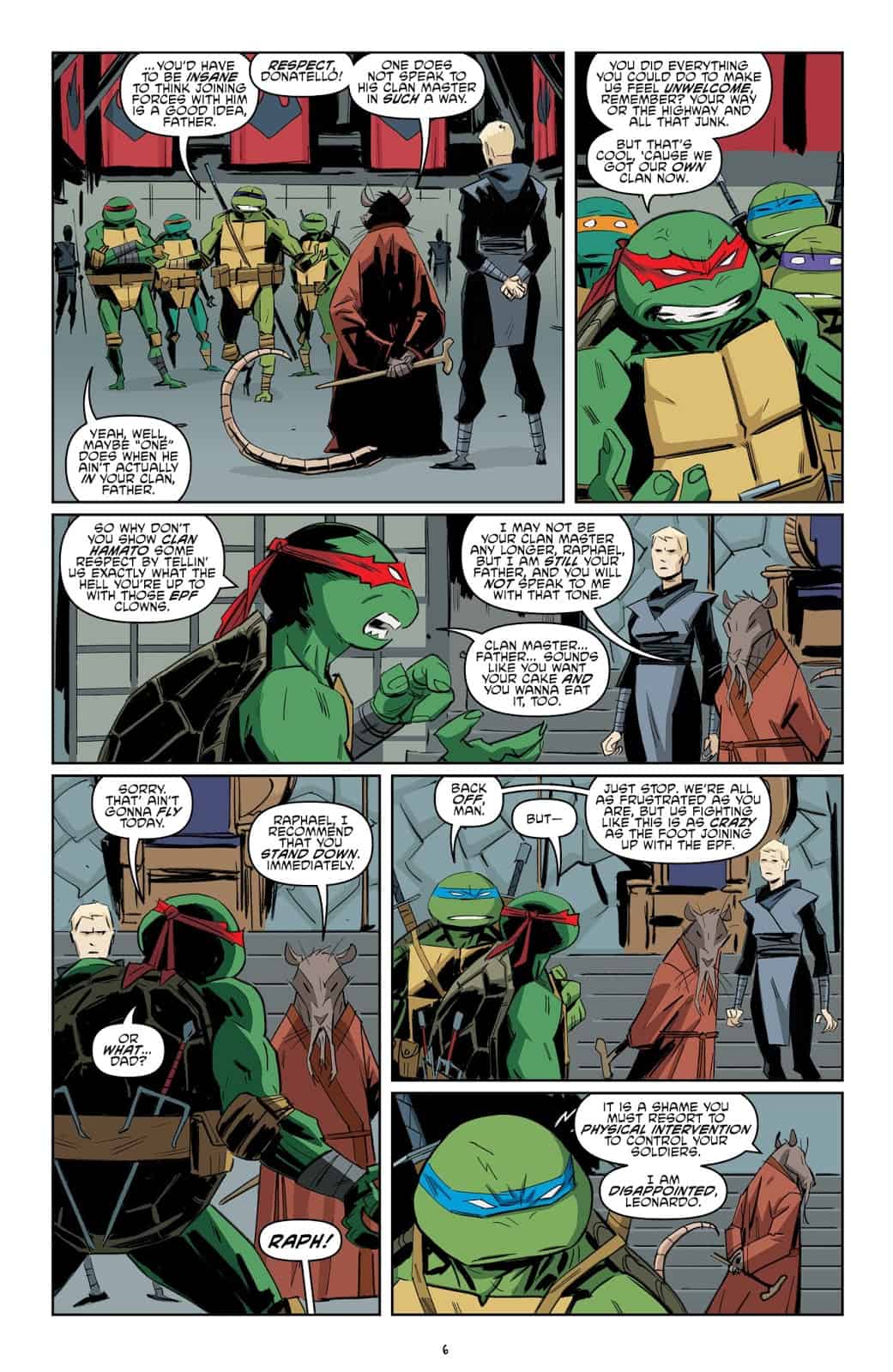 What Just Happened?
Back at the Lab John O’Neil speaks with his wife and Baxter about the state of the city. It seems that business is good for Baxter as a result, as he has obtained a city contract to evacuate the citizens. The conversation goes to them talking about Casey defending his neighborhood, and that sparks an idea for April.

Meanwhile, the Turtles are hiding among the rooftops, and dodging gunfire from all sides. They see the Triceraton getting torn to shreds by snipers, and intervene. 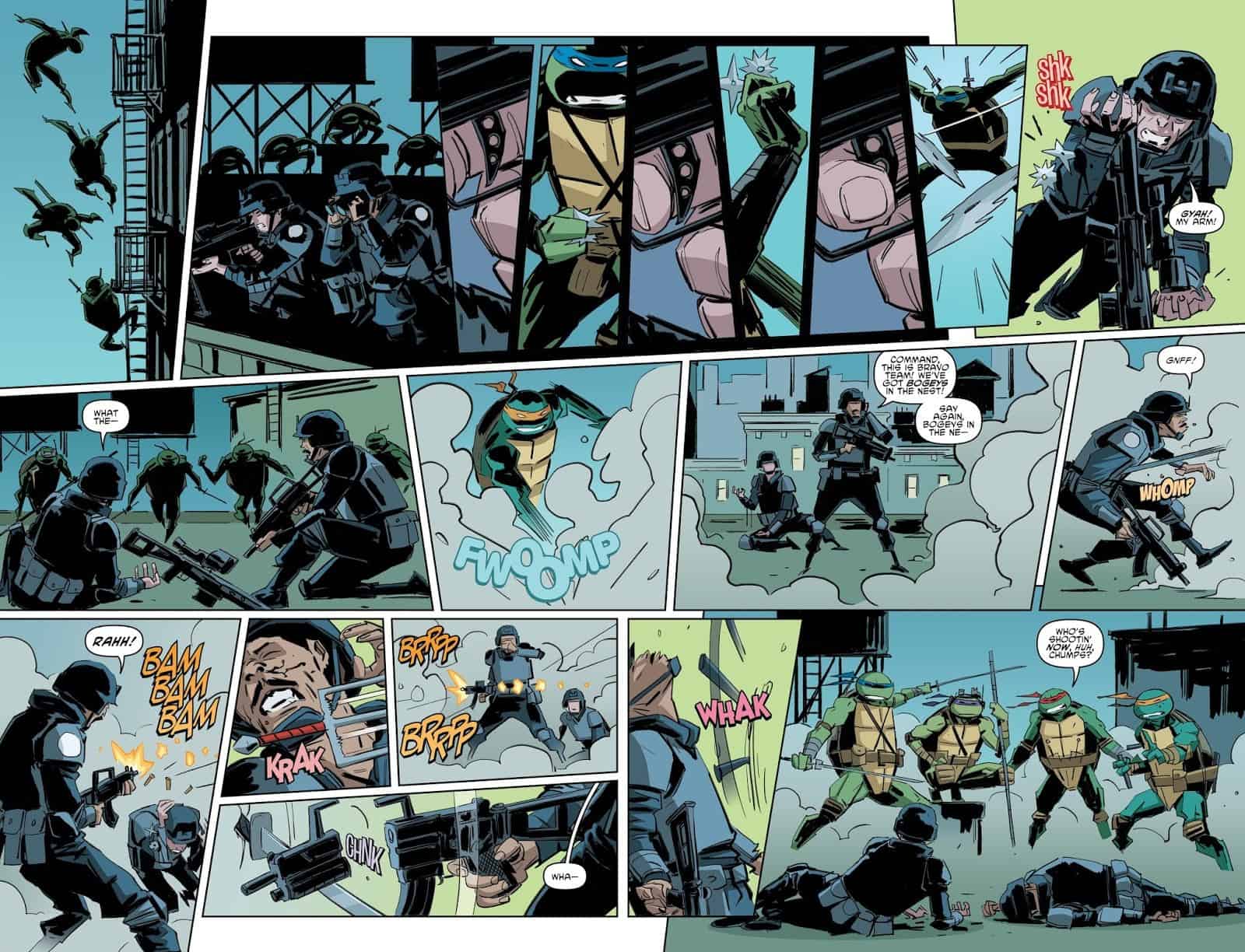 As they finish the SWAT team, Donnie gets a hint of April’s plan, and they head off to complete the plan.

Splinter confronts the Leader General Zom of the Triceratons, in an abandoned Church. He instructs them that they may not survive the day. Just as Leo who startles Master Splinter with “And that’s why we’re here…” The turtles show up to protect the Triceraton leadership from the Foot Clan and their own Father. 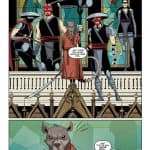 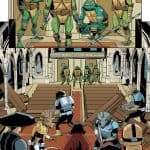 Rating: 7 / 10
Final Thought:
The story is fun, and the dialogue is good as well; however, the art on this book is not my favorite. Braham Revel’s style is weak with lack of details, and this is sometimes a worthy way to tell a story ( Think Hellboy Mike Mignola), but in the case where the majority of the Panels are exposition or dialogue and not action, the style does not lend itself well to this book. I found it harder to interpret and a distraction. Compelling story so I will stick around, but it’s my hope that this issue is not your first exposure to the TMNT Universe.