CROSS TIME CAPERS Part 4! The X-Men must stop The X-Men from murdering Magneto!? 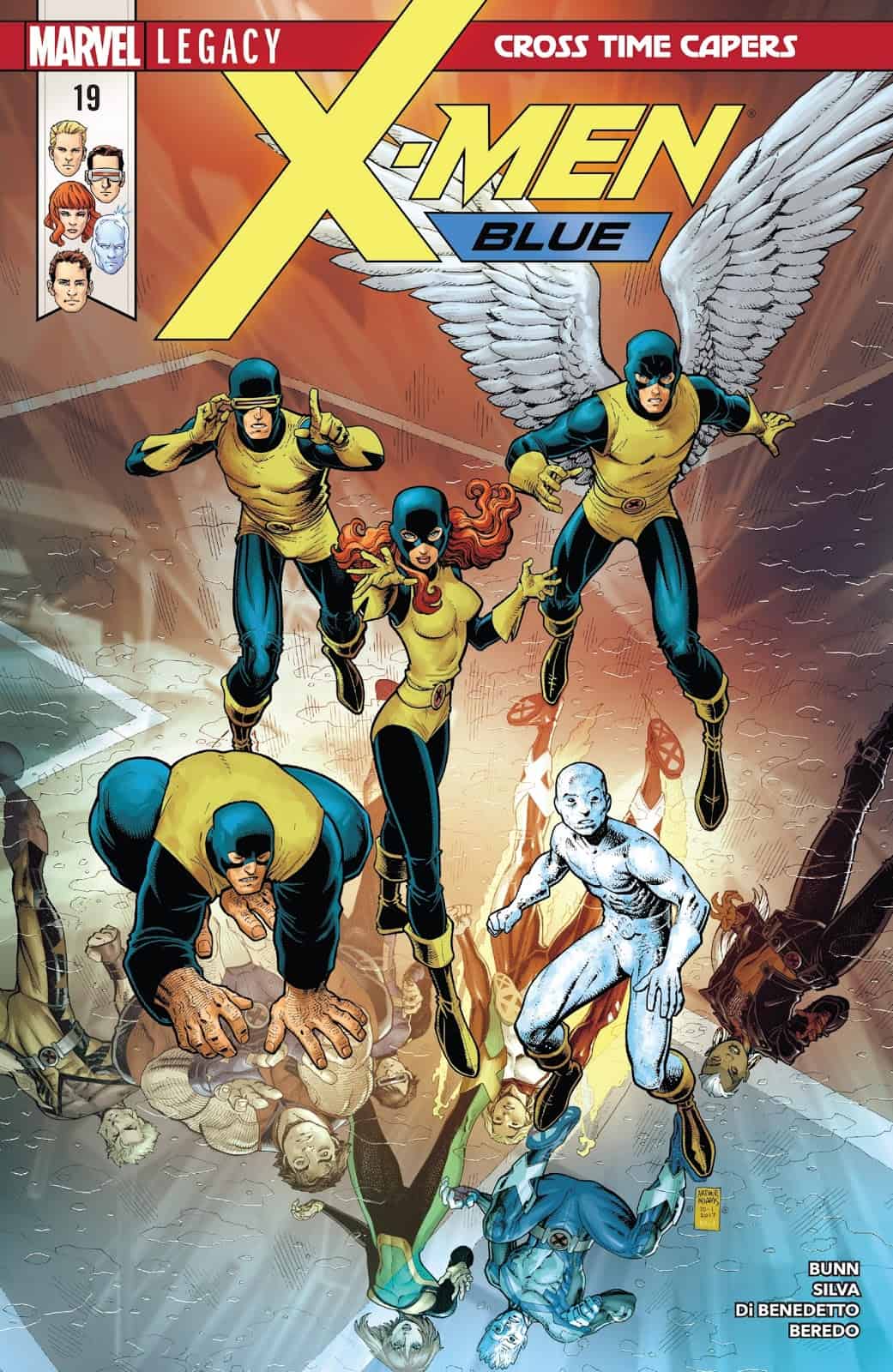 What You Need To Know
Using a time machine Magneto had hidden in the basement of the X-Mansion, The five original X-Men along with two other time-displaced teammates, Jimmy Hudson and Bloodstorm, attempted to head home, back to their original time. Jumping into various moments in X-Men history, to the future of 2099 and back to the recent past, they ultimately land back home, just in time to witness the murder of the Brotherhood of Evil Mutants and Magneto…by THEMSELVES!?!?

You can read my reviews for the first parts of this story arc here: Parts 1 and 2 and Part 3

What You’ll Find Out (SPOILERS)
Back in their own time, the X-Men can easily see something is wrong, again.

But the attack is joined by an unexpected guest. 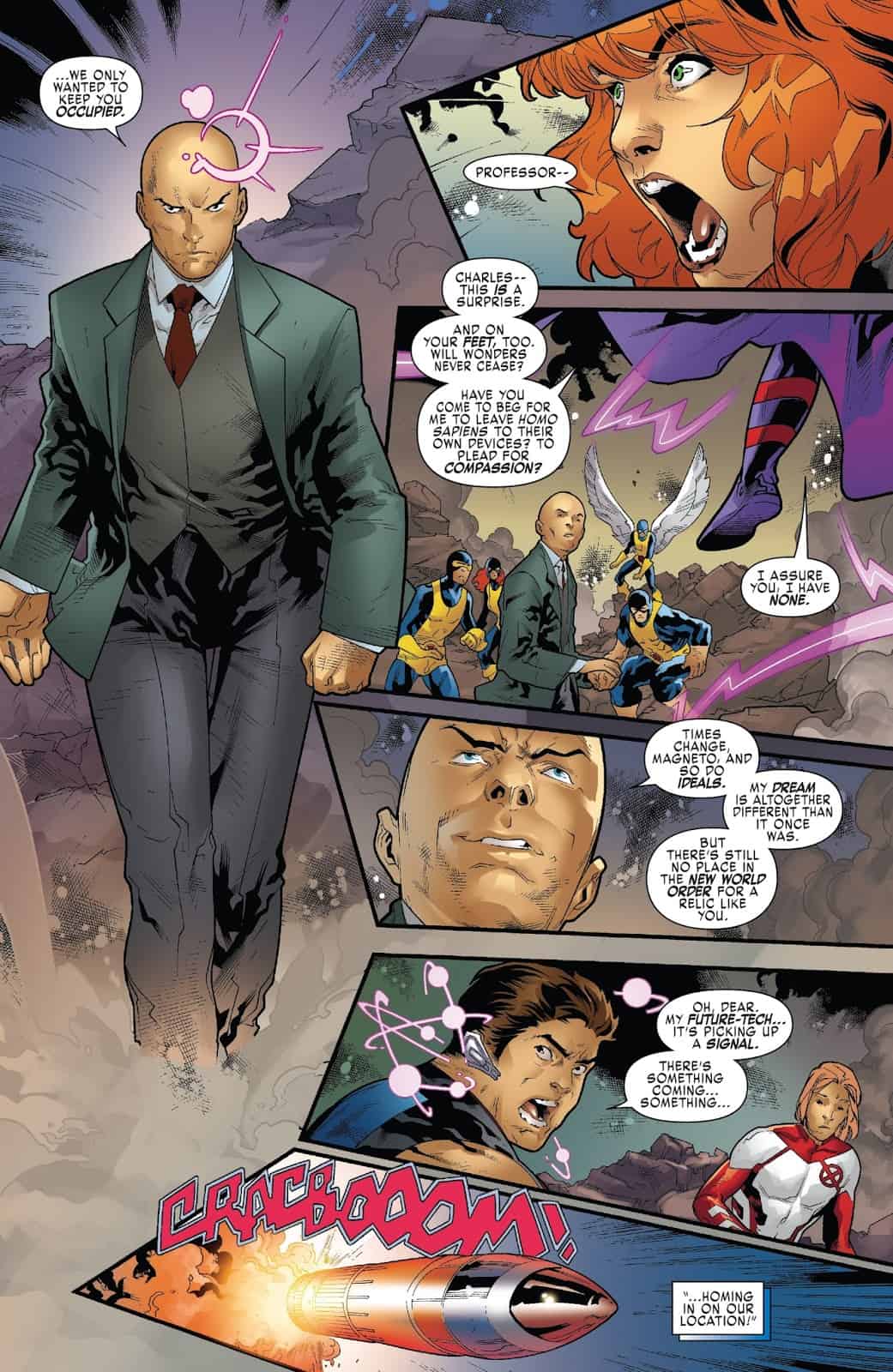 The X-Men battling Magneto take their leave in an interesting fashion.

But then Hank McCoy has his own interesting means of making an exit.

Witnessing the panorama of historical X-events play out before them, Jean means to explain things to Magneto whether he wants to hear them or not. 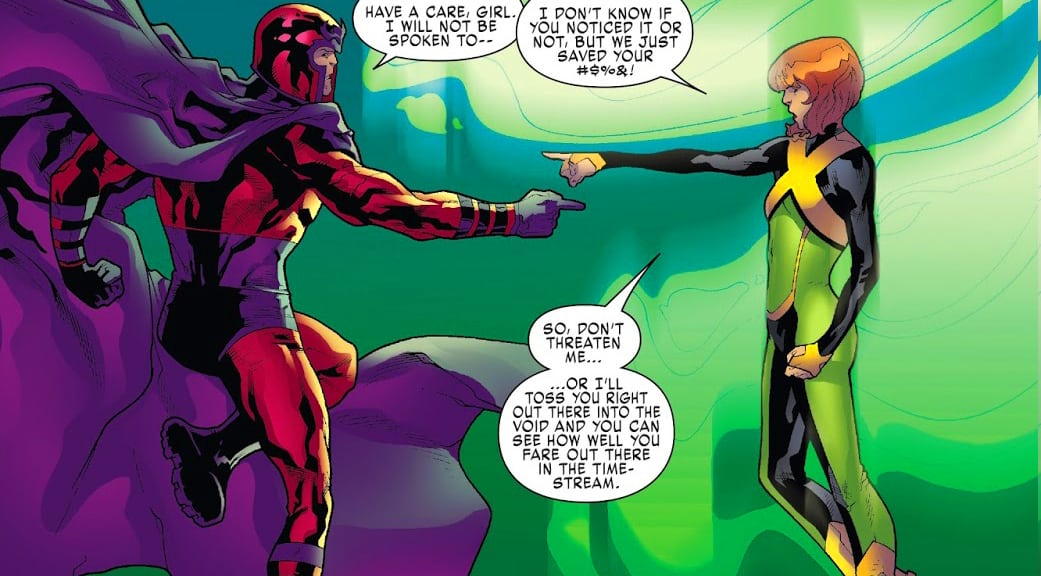 Recognizing a common goal, the Magneto and the X-Men send themselves to the X-Mansion to confront Xavier and his X-Men. But the curtain has fallen on this charade. 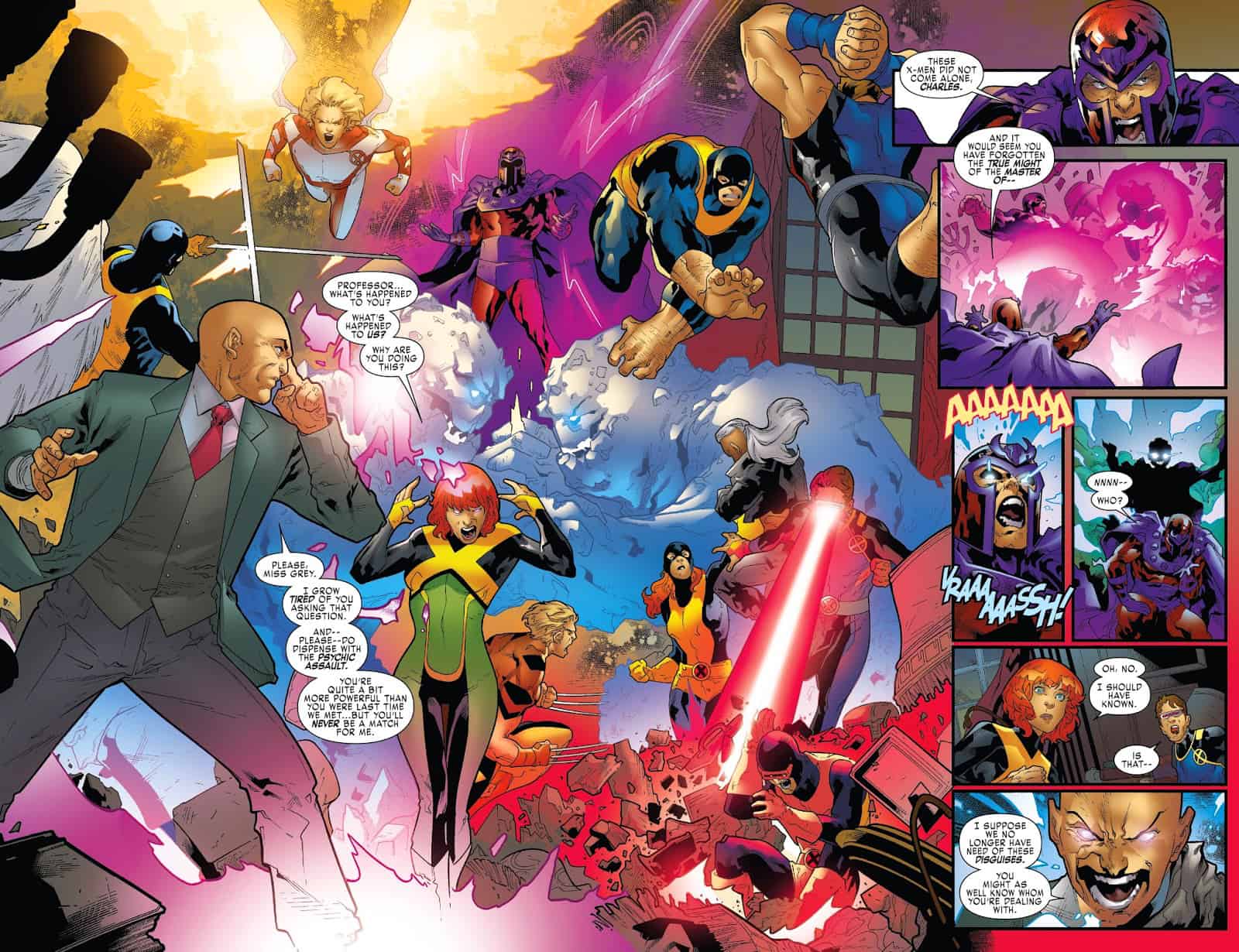 What Just Happened?
To be honest, I never gave it a second thought that this was the Brotherhood. With so many time travel and duplicate character stories so prevalent since the Original 5 were brought to this time, I simply figured they were a paradox of some kind, to add to an already complicated backstory. But this reveal makes perfect sense now. The Brotherhood of Evil Mutants from the future first appeared during the Battle of the Atom event in 2013. They originally posed as future X-Men, with the goal of forcing the time-displaced X-Men back home. But there are still a lot of questions to be answered, and I’m sure Cullen Bunn will not disappoint. This story arc has injected the title with major forward momentum. With so many of the original versions of characters returning to active duty in their titles and the obvious restructuring happening at Marvel, the driving plot point about whats going to happen to these time-displaced characters is headed towards some kind of conclusion. Either way, the title is headed for something big. As I’ve stated before, I reeled at the idea of bringing the O5 to this time, and I considered it a novelty idea. But this book has grown quite a bit from when it first started. Expected to fall behind the flagship Gold, Blue surprised many readers early on as the more popular of the two anchor X-Books. There were times when Blue suffered from too many characters/ideas/subplots/cross-overs going on but, over the course of the last several months, it has begun a steady climb up. The additions of Jimmy Hudson and especially Bloodstorm have piqued my interests, and I’ve grown to like the 7 of them together.
Once again, Jean shows her leadership skills and toughness when dealing with a big-bad like Magneto. As originally written, and more often than not, Jean, along with Sue Storm and Janet Van Dyne, had to endure the damsel in distress syndrome. Looking at some old issues of X-Men, I remember Jean had a few moments where she asserted herself and her leadership skills. Many readers have said young Jean is stronger than original Jean. Anyone that knows the history of the character will tell you, yes, we are seeing Jean with no social restraints, but it is in keeping with what the character always displayed in her personality. This is the woman who went face to face with Wolverine, early on and showed no fear. The interpretation of the young Jean is really great to see here.

The art team really hit it out of the park with this issue. From the gorgeous cover by Adams and Beredo to the increasingly stellar pencils and inks by Silva and DiBenedetto. 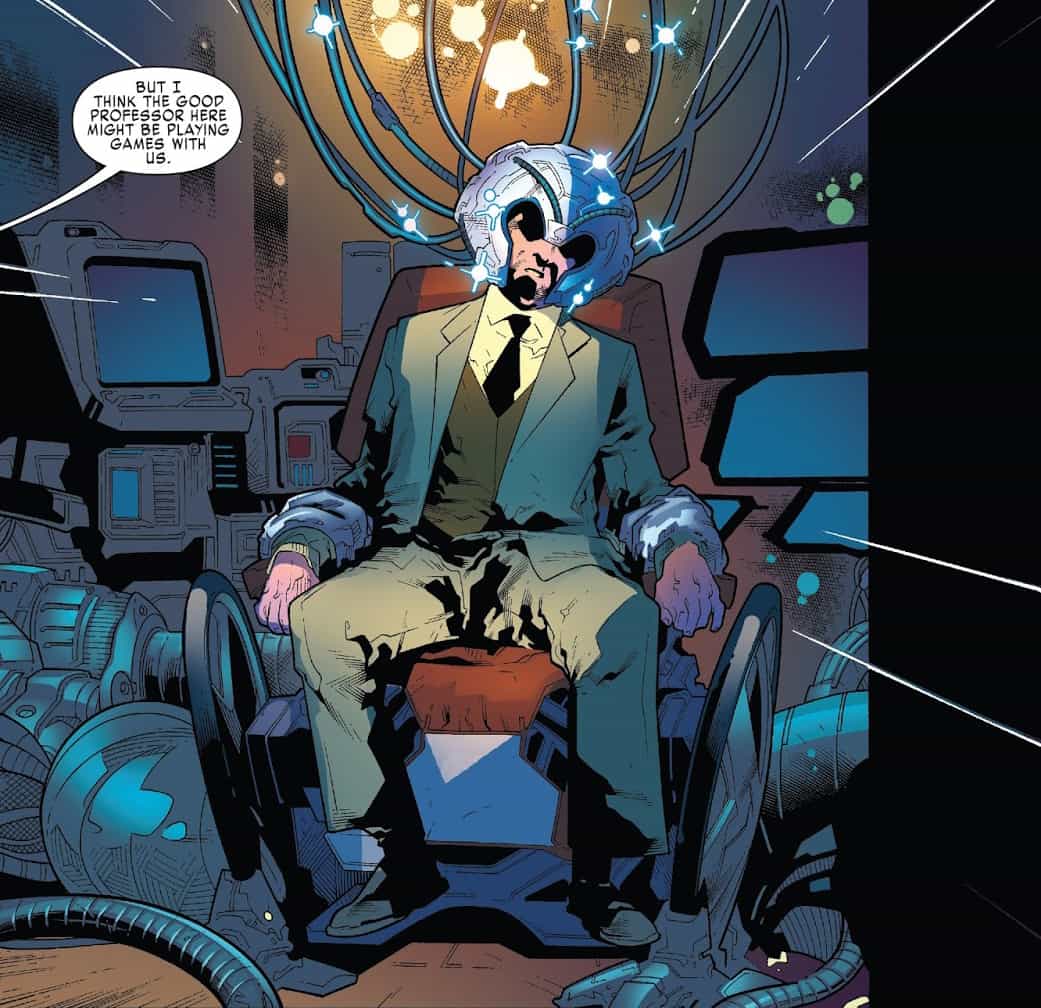 And breathing more life into the figures are the fearless colors by Joe Caramagna. I use the word fearless because too often these days, colorists chose a muddier palette in their quest for realism. He uses every color in the box and I love that! 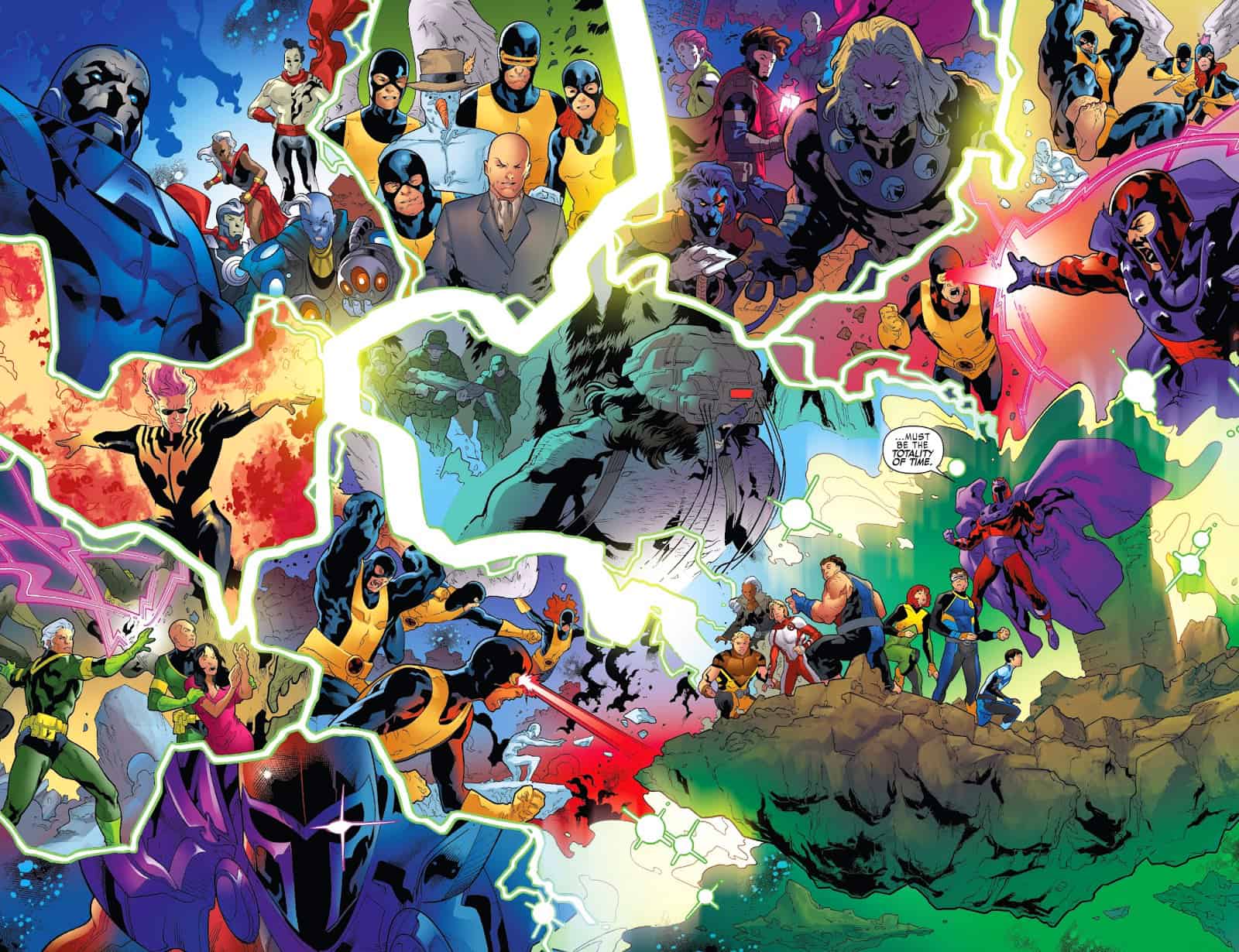 Rating 9.5/10
Final thought:
My favorite chapter of this arc so far, X-Men Blue is really moving along quite nicely and finally revealing some secrets!