As the imprisoned X-Men are faced with a challenge from the top dog in the Robert Kelly Correctional Facility so too the replacement team on the outside deal with an attack on the city from The Shredded Man. 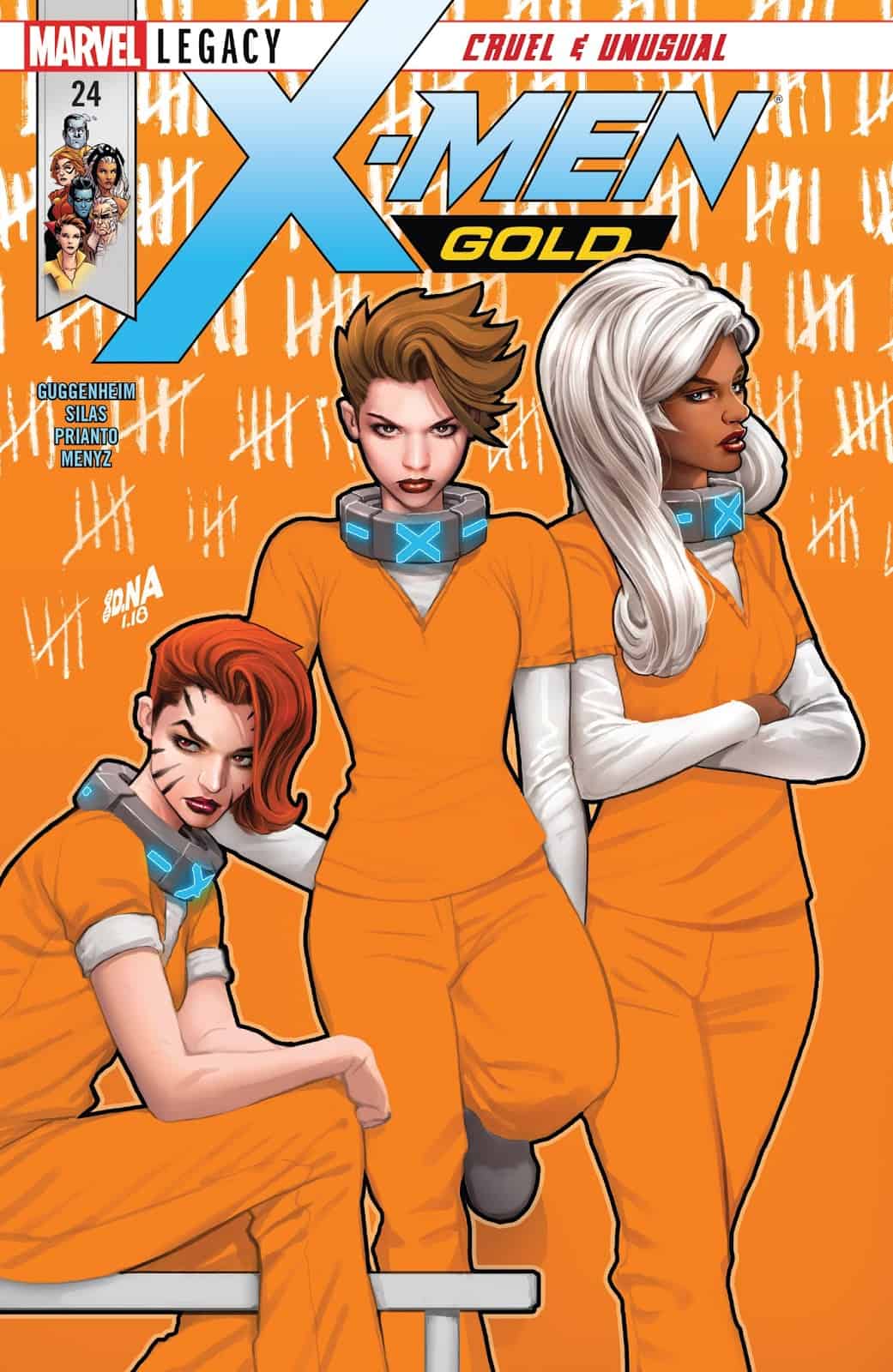 What You Need to Know:
After being fooled by Mesmero into battling the police the X-Men have been incarcerated in the mutant detention center known as The Box and are the target of the new top dog Crazy Maise. Meanwhile, Iceman has taken over the reins while they are in prison and has recruited a B team to keep things ticking over. Unknown to all the crazed god Scythian has escaped the Negative Zone and to make matters worse the Shredded Man is plotting the demise of New York from the subway beneath.

What You’ll Find Out:
Storm and the girls are cornered in the exercise yard by Crazy Maise and her crew of misfit muscle in the form of Bliss, Animax and Electric Eve. Kitty accurately concludes that reasoning with someone called Crazy Maise won’t work and instead points out that even without powers they are equipped with combat training. Maise makes it clear she is unimpressed and Storm takes on Bliss after being told by Callisto she won’t get involved and is on her own side as she stands by arms crossed. Rachel squares off against Animax and Electric Eve and notes she needs to strike prison yard fight off her bucket list, leaving Kitty to take on the imposing Maise who clearly towers over her. Making short work of the thugs the victorious X-Gals (X-Lags?) are interrupted by the guards who arrive just in time to do nothing but mop up the aftermath just as Kitty informs Maise she is also a ninja, possibly falling on unconscious ears. 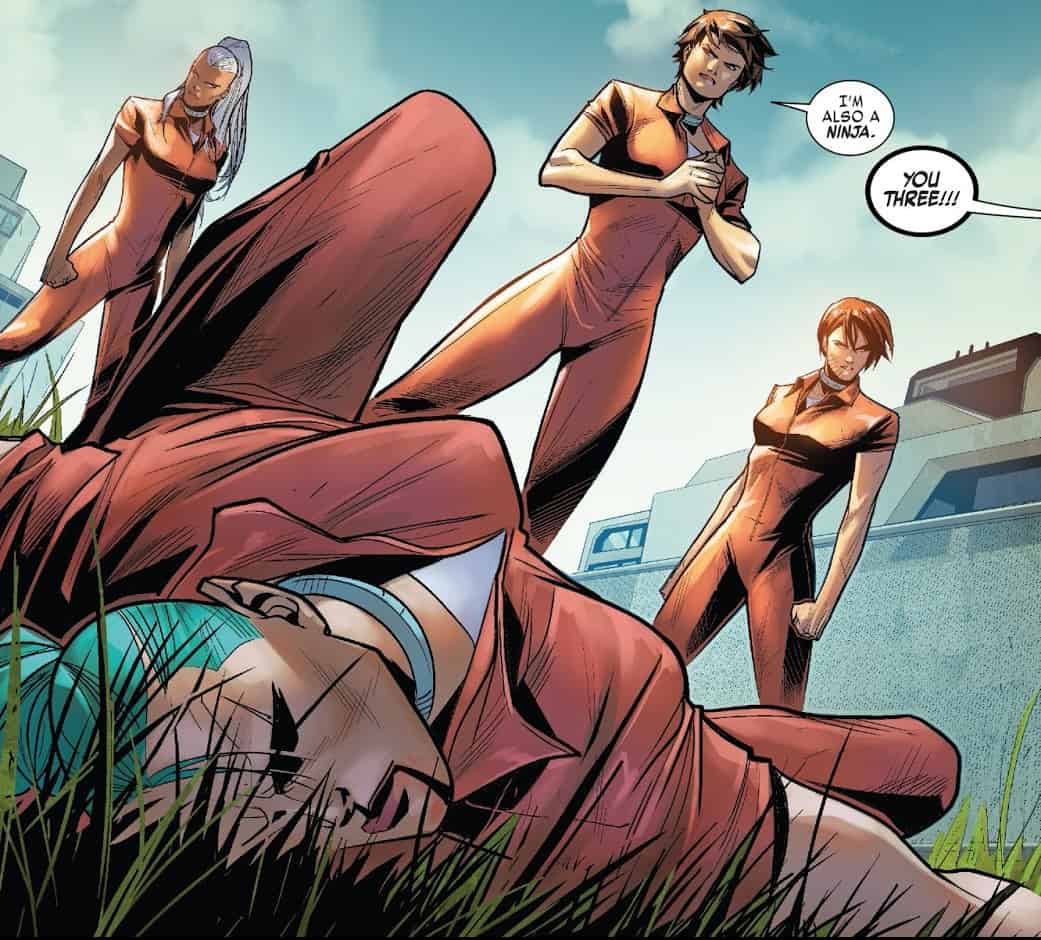 Storm has just enough time to warn the guard not to touch her again or she will feed him his gun before the warden arrives demanding an explanation. When Kitty tells him of the attack on her and her friends and points a finger at the guards, accusing them of taking a bribe and turning a blind eye, he asks Callisto if she agrees with this and Kitty suggests she will have no opinion as she wins whatever happened. Having heard enough he makes the decision to impound them all in solitary for three days just as he is interrupted by the arrival of another guard informing him of a threat in Manhattan. The Shredded Man has made his presence known and is attacking and takes pride in the turmoil he is inflicting on the humans despite the fact he is not in control. Luckily the replacement X-Men are on hand to deal with it. 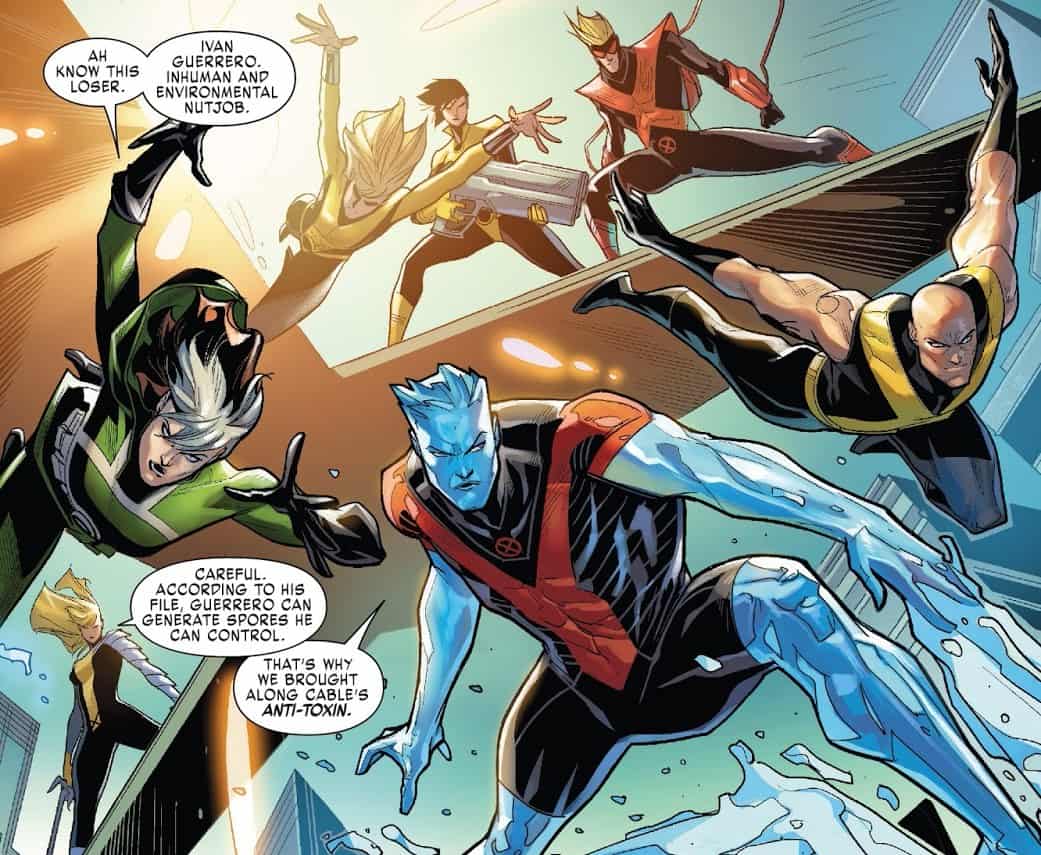 As Magik reminds the team Guerrero can emit spores Iceman informs her they have a secret weapon in Cable’s anti-toxin brandished by Armor. Iceman gives each member a task of either attacking or defending and backing up a teammate. As Armor fires the huge gun at Ivan it soon becomes apparent it isn’t as effective as hoped. Ink points out that The Shredded Man has formed a cocoon and Iceman decides it’s time for a new tactic and advises that they should attack the vines coming from below the ground. Rogue has trouble getting through the vines noting they are as tough as steel and this prompts Iceman to try to freeze them and gets her and Ink to smash them. Rogue thinks this is too slow and asks what plan C is.

When Pyro sees the growth is old Magma explains it is probably older than the city itself. He exclaims they could have a big problem prompting Magma to snap at him. Sensing hostility he asks if her issue is his recent past and reminds her that she shares a similar one. Magma bristles visibly and retorts that her friends are in prison because of Mesmero causing him to back down and comments on Mesmero’s penchant for choosing “fire buddies”. This seems to cool her demeanor and she suggests they get on with the job at hand. When burning the vines doesn’t work Amara is stumped but the make-up of the vines reminds Simon of something from his past and on a hunch they make a call to Cecilia back at the lab. 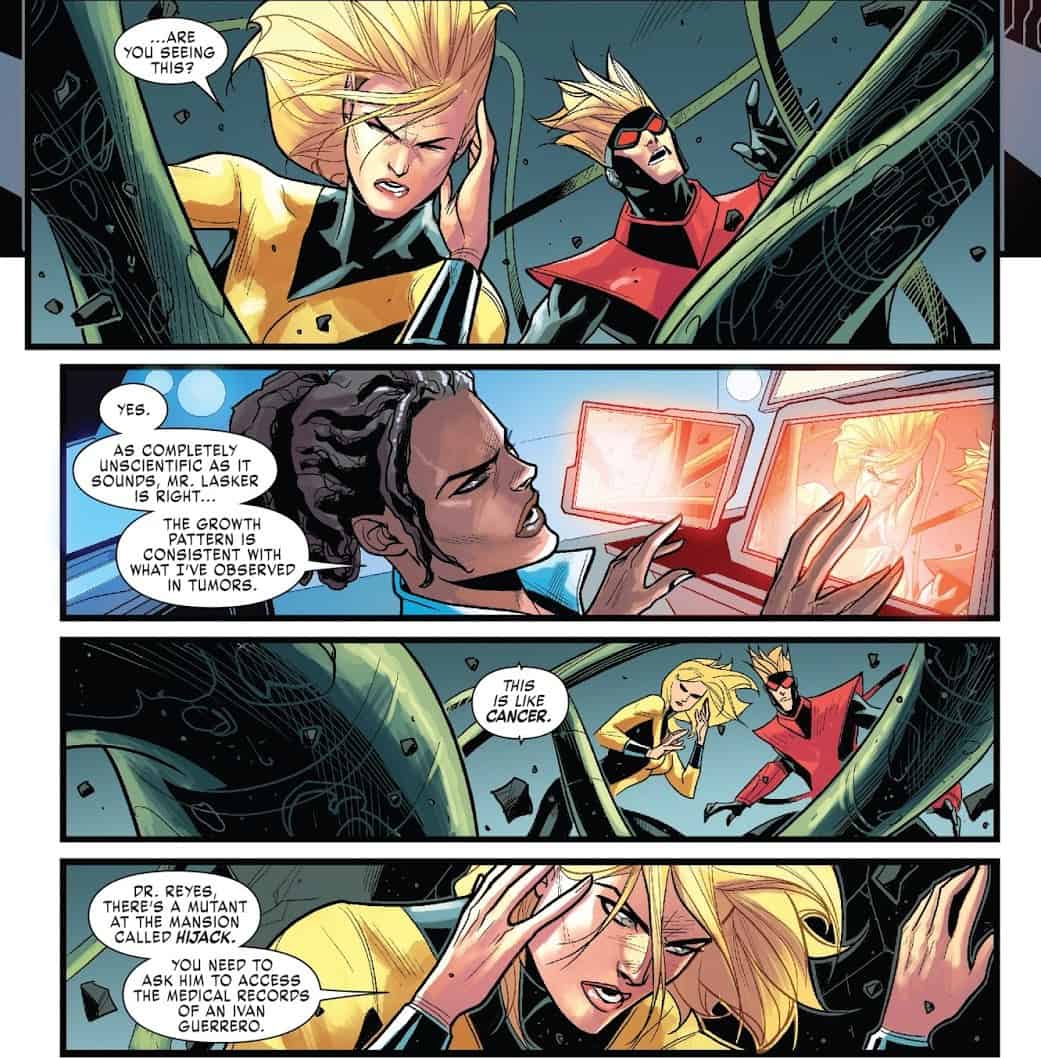 Simon’s hunch has paid off and Cecilia confirms the vines are taking the form of cancerous tumors and Amara decides the best option is to get hold of Hijack from the mansion and get him to access Ivan’s medical files. Meanwhile, Iceman tells Ink to get Armor and Magik clear while he and Rogue take on the threat. Down below the two hot-headed X-Men receive the info they needed and pass it on to Rogue who faces off against Ivan. 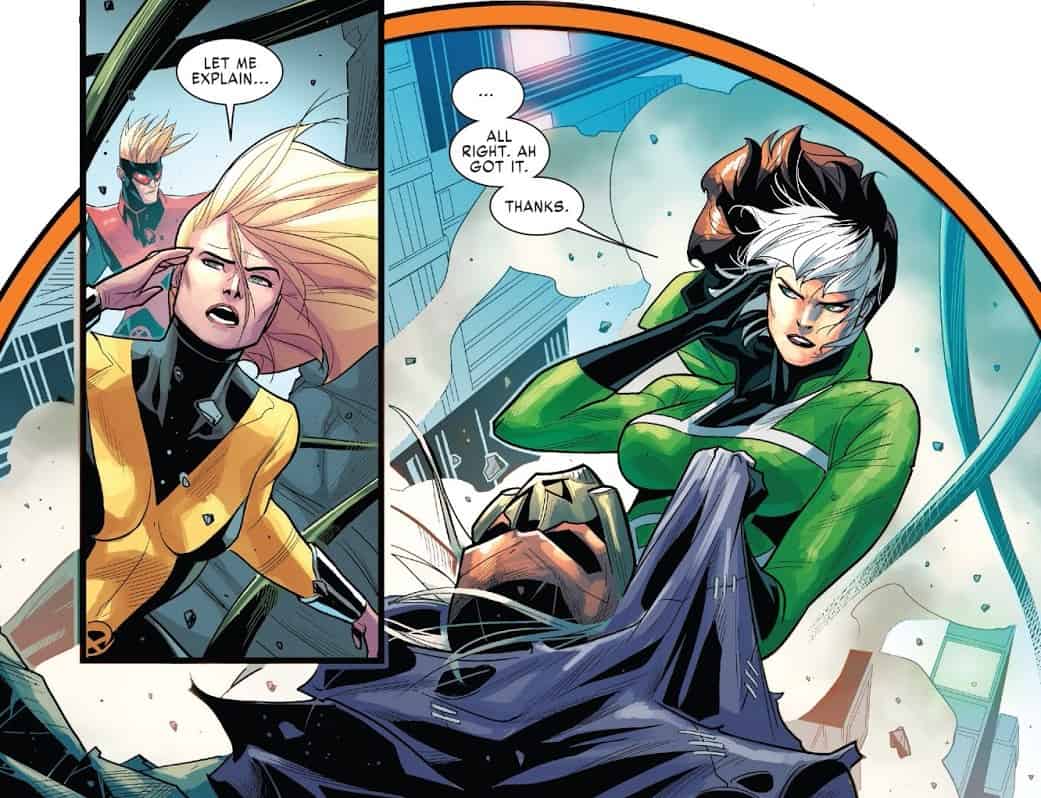 Confronting him with what she has been told she assumes the vines are his cancer and he tells her it’s not quite so but they are an outward expression of what is happening to him and that he has vowed to take as many humans down with him as he can before he dies. Rogue tries to talk him down and convince him it doesn’t have to be this way. When he says he can’t control it she reasons that maybe she can, offering life, not only for those he hates but maybe for him too. Seeming to give in he still insists he will try to save the planet from humanity. Bobby arrives and she assures him that although it’s a lot of power to control she can reverse the damage. Meanwhile back in The Box Storm faces the consequences of the fight in the yard as she is thrown into solitary and tries to tell them about her claustrophobia as the door slams closed leaving her alone and trapped as the walls seem to close around her. 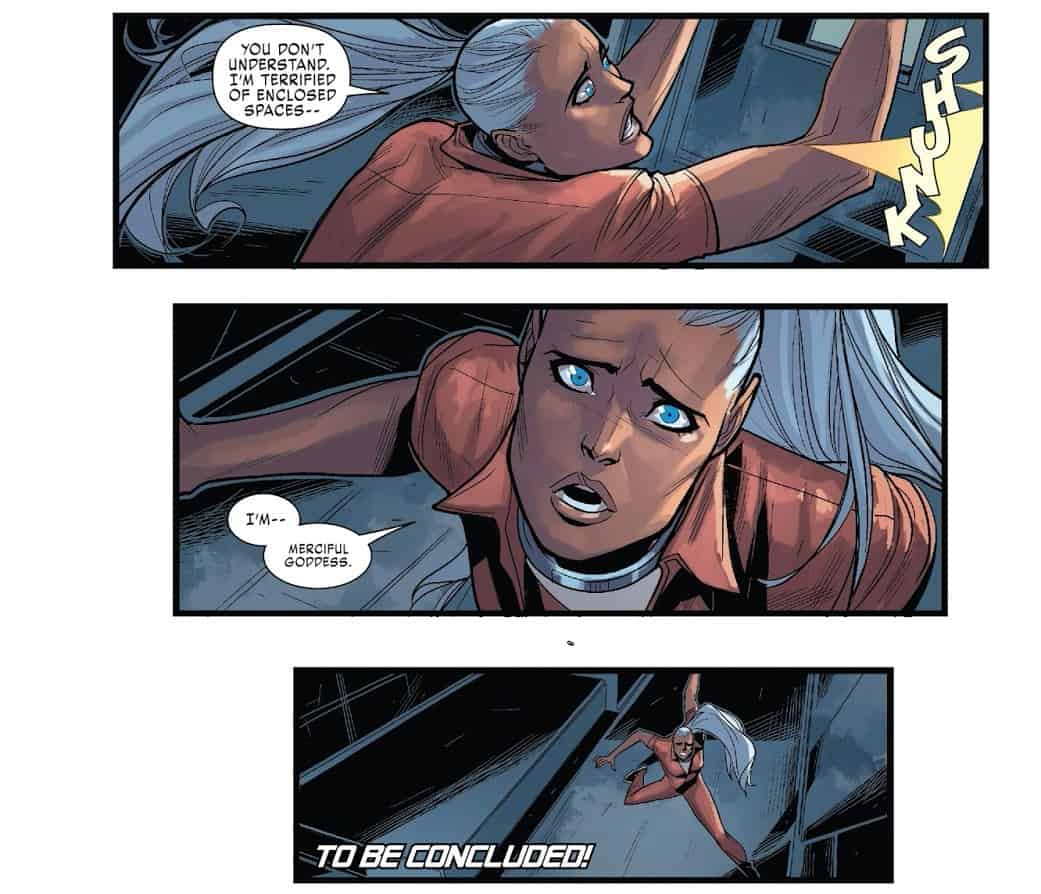 What Just Happened?
Guggenheim is actually making me like Pyro as a hero. I know this isn’t Allerdyce and poor Simon wasn’t a Brother for long but the name Pyro being used as a hero takes a little getting used to. But his reasoning with Amara is logical and helps to assert the fact he is trying to reform. And a shout out has to go to the cover artist David Nakayama, for the first time in a while I was blown away by an image even before opening the issue and it made me anticipate the story even more than I already was after the last installment. Still loving the art of Thony Silas here with the back and forth between Pyro and Magma and his action scenes are on point. I’m also definitely a fan of the red and black on Pyro and Iceman (even if Pyro reminds me a little of Captain Scarlet). Ink and Rogue doubling up the muscle was fun too. It’s nice to see someone back her up and not have her go into the fight alone…where are his tattoos though? 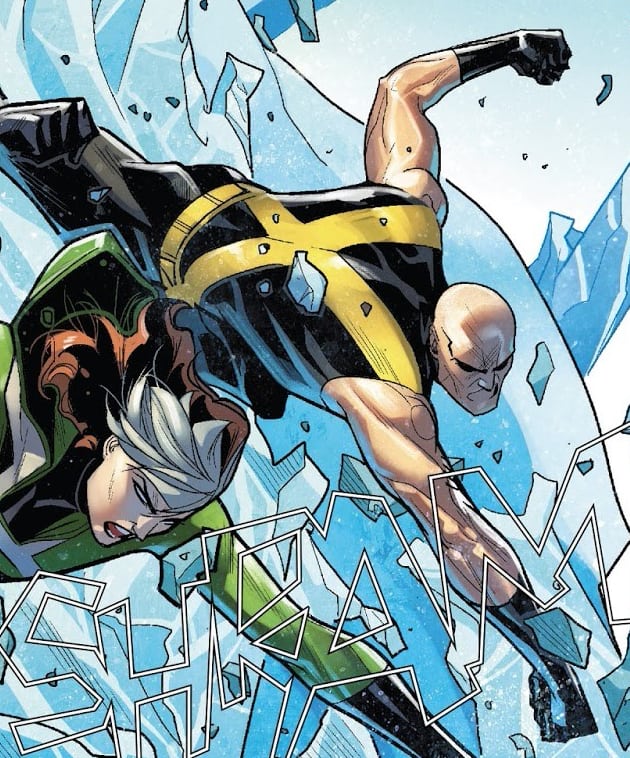 Story-wise I did not expect any of that at all. Firstly I assumed Storm was going to take on Maise alone and beat her down to claim her spot and be challenged by Cal. This was not what happened at all, though the tag team battle was a worthwhile replacement for what I had hoped. Kitty rose to the occasion and finally reminded us all of her ninja training and the girls themselves all showed what the Danger Room training was for.  Then I expected Iceman to take charge team leader and Pyro and Magma to be completely useless. And despite a little growling from Amara she and Simon made a worthy addition to the team, backing each other up admirably as well as actually provide the solution to the overall threat without even needing their powers. And after the ordeal in the Danger Room, everyone did well in the field, especially the new recruits. The only thing I was missing this issue was the whereabouts of the boys inside with Storm, Kitty, and Rachel. 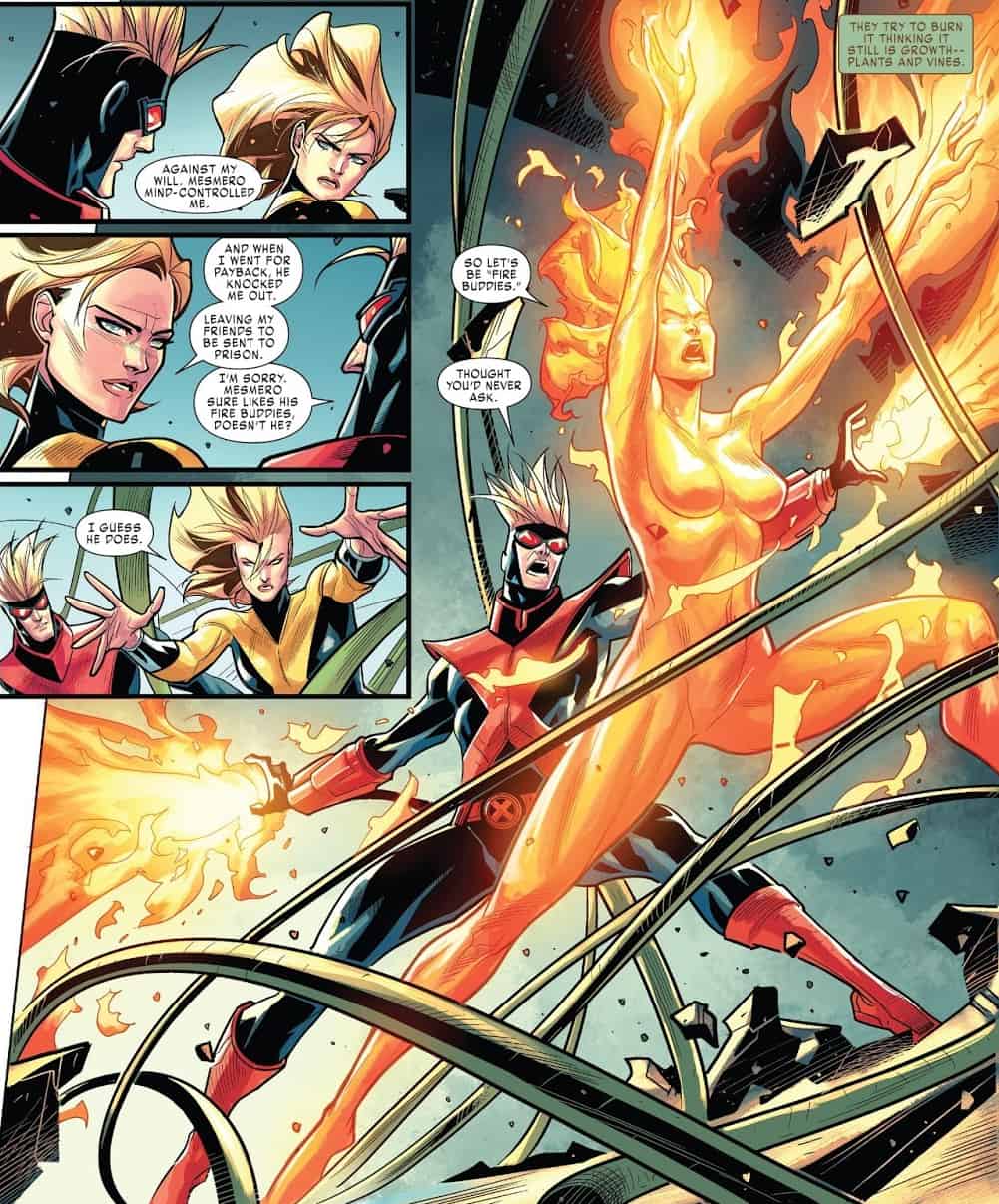 Although I was confused as to her assertion that she was mind controlled while part of the Brotherhood insinuating he wasn’t, while in prison he and Avalanche were talking about being under his control and also last issue he told Bobby and Rogue he was as well. It will be interesting to see how much of his time there was spent under control. Seeing Kitty victorious was a sight to behold as well, though Storm reverting to the fear response was a struggle for me. Yes, it’s not unheard of to have a relapse of the condition but I had hoped she had dealt with this demon way back in X-Men volume 3, although the visual of having the room shrink around her was a good one.

Final Thought: Trial by fire pays off for the newbies. Pyro and Magma are on fire without even using flames.