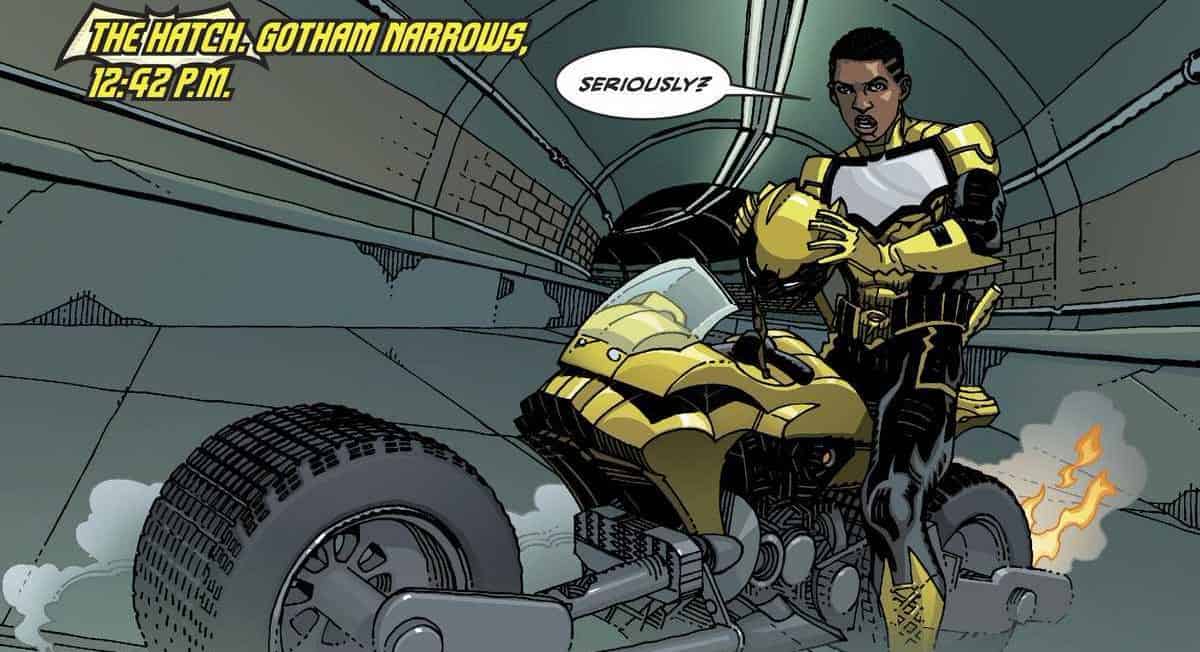 After just one day as Gotham’s daytime protector, The Signal must confront a conspiracy that could change his entire life! 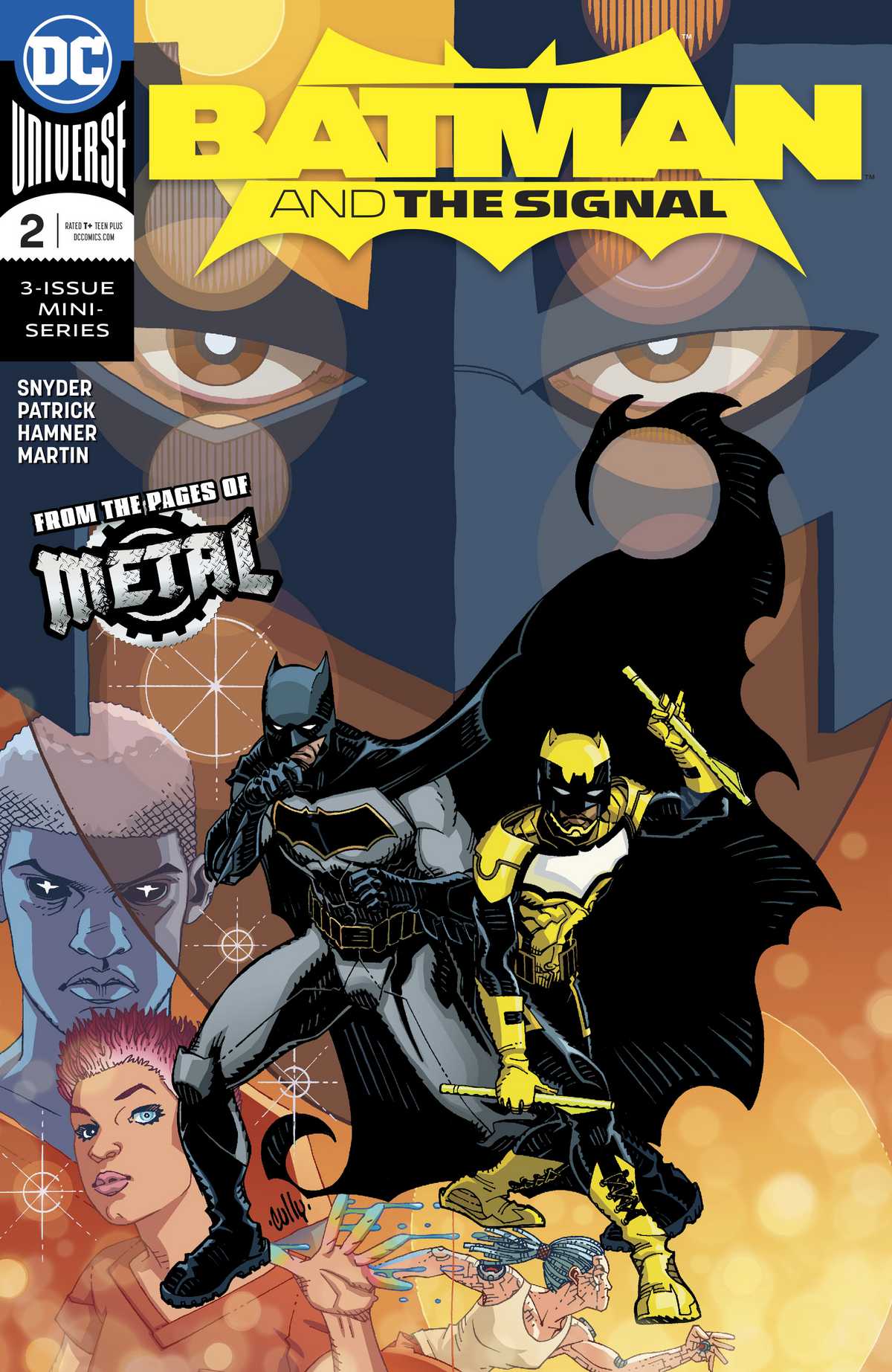 It’s the first day on the job for Duke Thomas as Gotham’s newest daytime vigilante, The Signal. However, a confrontation with a meta named The Null reveals a conspiracy surrounding Signal’s abilities that forces him to recruit the help of some former Robins. With Duke receiving a new hideout from Batman (who fondly calls it “The Hatch”), Iz and Riko decipher the potentials of the metahumans when exposed to The Signal’s biology. The Signal agrees to search the juvie Arkham under construction in hopes of learning more about the reactive agents in the metahumans and uses his own powers to follow detective Alex Aisi down into the cells. Before he can realize the trap before him, The Signal is struck down by Null and his meta friends who now claim to be his real family…

The issue begins with a brief introduction into the city’s past habits of corruption, this time revolving around the construction of its skyscrapers. In order to avoid union laws, nighttime construction crews called “shadow crews” would work when the day crew left. Duke’s father was on one of the last shadow crews…

Back inside the Arkham juvie center, The Signal takes on the group of metahumans attempting to destroy him. At the advice of Iz and Riko in his communication channel, he is able to gain the edge by using his suit’s technology, but Null abandons his orders and attempts to kill Signal. Just before he is able to, detective Alex barges in and stop him. Somehow, a shadow figure from far away takes control of the minds of the meta children and sends them all back to their cells, promising to dispose of their families as punishment for their defiance. 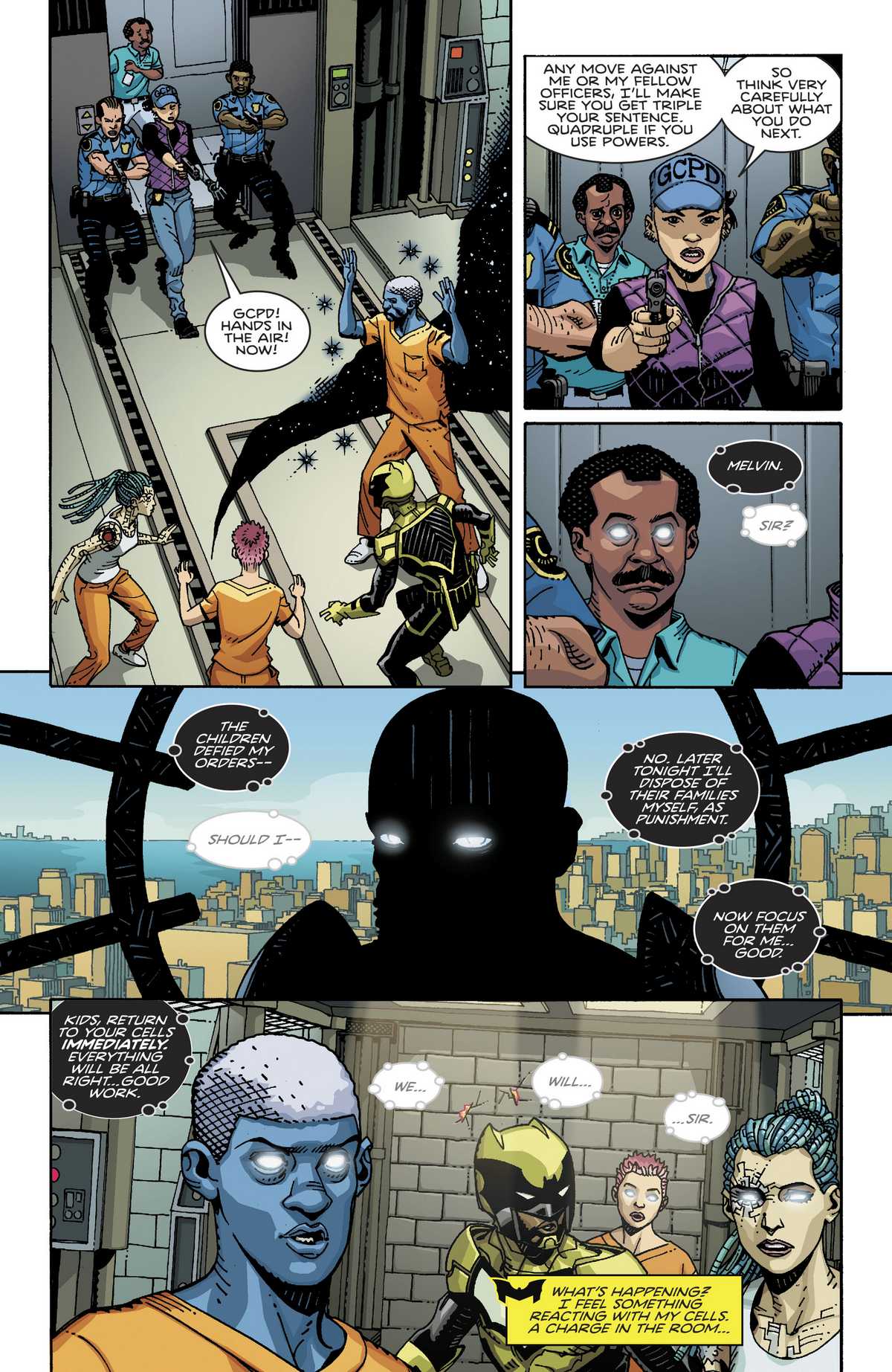 Back at the Hatch inside Gotham Narrows, Duke is forced to confront Riko about the reality of their crusade, but she is determined to leave. At an undisclosed location, the unknown man from before studies The Signal, explaining how he has watched him for his entire life despite his mother’s interference. Now he promises answers.

Detective Alex arrives at the mortuary to study the newly dead meta-humans piling up when The Signal appears in front of her out of nowhere. After a debate on if he can be trusted, Alex gives a sample of tissue to Signal. Within minutes the two figure out a variation of the Nth metal is being triggered by something the neighborhood is exposed to all day. The sun! 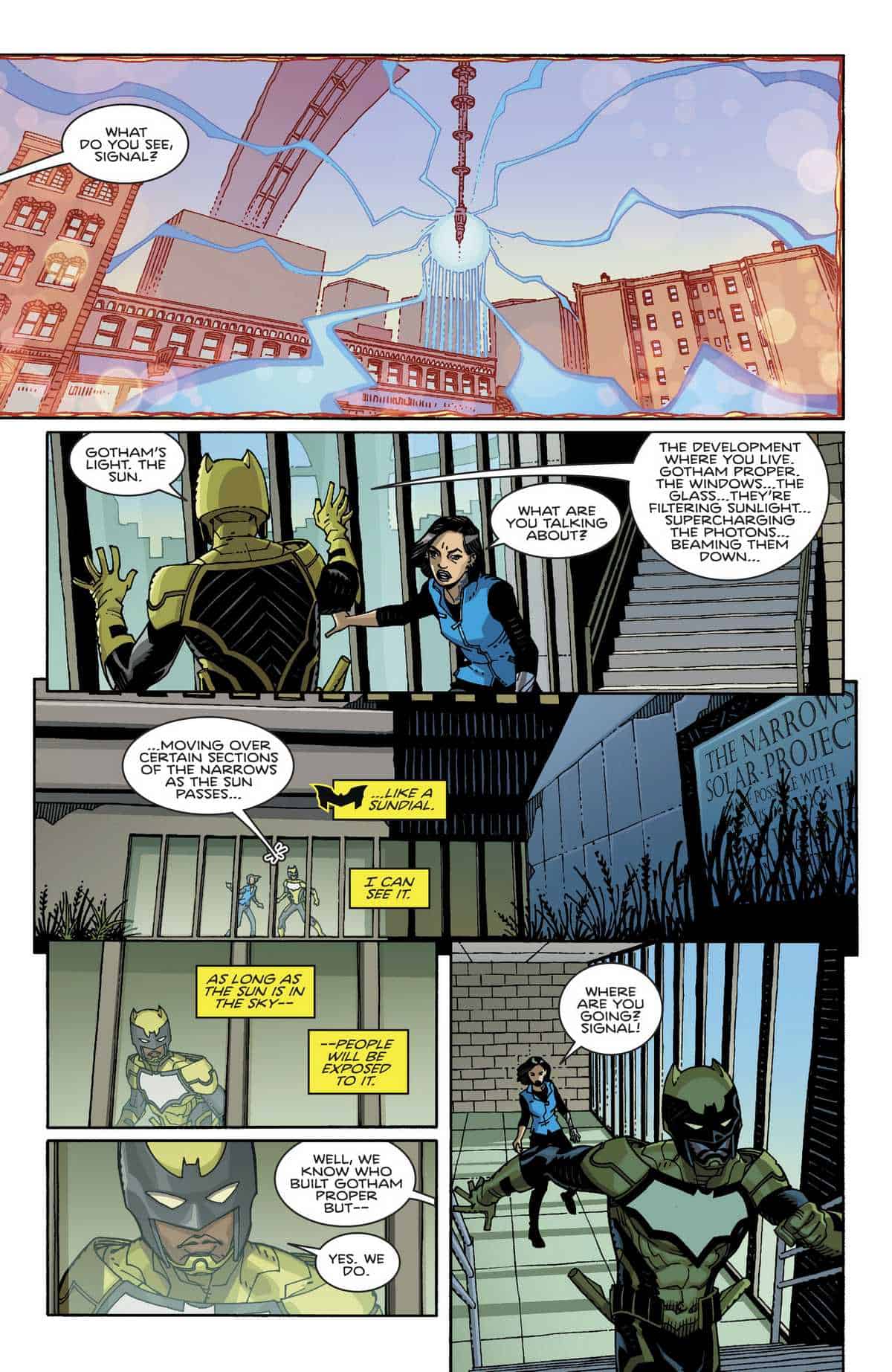 Gotham Proper, the new development under construction and funded by Wayne Enterprises, is acting as a sundial and filtering all of the light onto specific areas of the city throughout the day. This revelation exposes Batman’s schemes to The Signal. Furious, he confronts Bruce in the Batcave, accusing him of orchestrating everything he has known. Before Batman can explain though, the unknown man appears on the screens in front of them. Claiming to usher in a new generation, he goes by the name Gnomon, and he tells them it is time that Signal finally steps into the light and face the truth that Batman has hidden for so long…

After an interesting moment of insight into Duke’s past, we pick up right where last issue dropped off, in the middle of a fight between Signal and a group of dangerous metahumans! In a scene that shows Duke’s lack of experience as an obstacle to overcome, readers are quickly thrust into the action. The pacing of the story finds its footing in maintaining this speed throughout the issue as we quickly learn about the villain truly behind these events. With subtle hints to Gnomon’s powers and identity, it is safe to say The Signal will be facing an epic confrontation very soon.

However, before that can happen, the conspiracy surrounding Duke’s powers becomes much more complicated with the discovery of Batman’s role in everything. As The Signal, he was able to see the Nth metal and instantly associate the Sun as a trigger for their heightened abilities. This has crucial implications all throughout the narrative, but most importantly it highlights Bruce Wayne’s housing development as evidence for his involvement. This forces Duke to reevaluate his entire relationship with Batman and intensifies the ramifications of the events in his life, but Batman has only a moment to deny it before they are interrupted by a much more prominent threat.

The artwork has moments of brilliance between some of the more dialogue-heavy panels showcasing a side of Gotham not often seen as well as The Signal’s brilliant daytime suit and technology. However, Signal’s motorcycle is the catalyst for some of the coolest moments in the issue. As he sorts through his past with Batman, The Signal speeds over to the Batcave in one of the most beautifully rendered scenes this year! 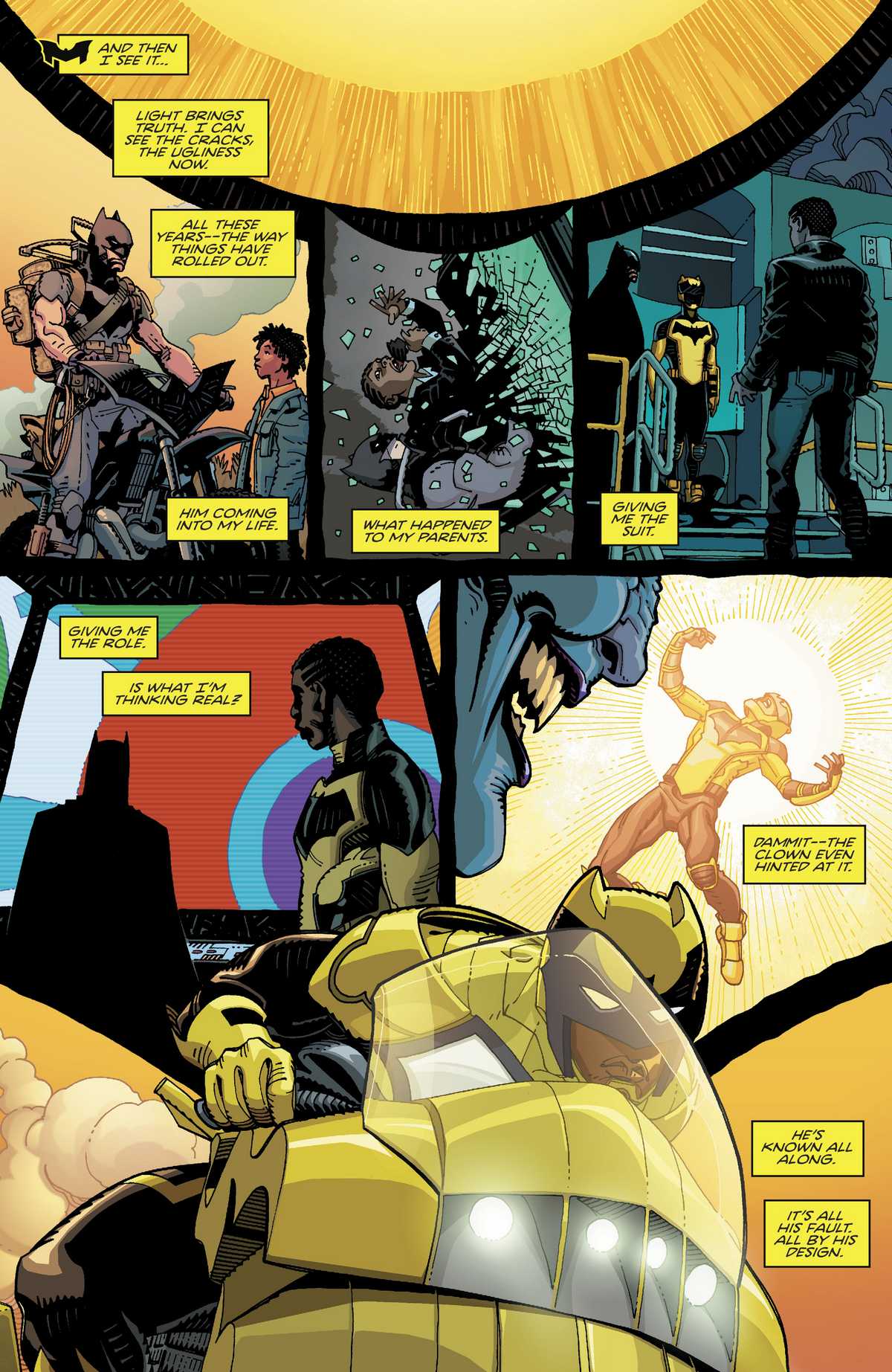 The latest issue of Batman and the Signal continues a strong start with a fast-paced story of both action and conspiracy, accompanied by a distinctive artistic direction that highlights the uniqueness of The Signal as a character protecting Gotham by day. Despite only being three issues long, this series is an absolute can’t miss for any fan!

Final Thoughts: The latest issue of Batman and the Signal is filled with action, conspiracy, and heart, making for an overall incredibly enjoyable reading experience. Although a few more issues would be great to flesh out the characters and events more, Batman and the Signal #2 sets the stage for a truly remarkable final confrontation!