After surviving a terrorist attack, a man named Morgan Stryker is the only one saved by his employers, but the price of his rescue could be his own humanity…. 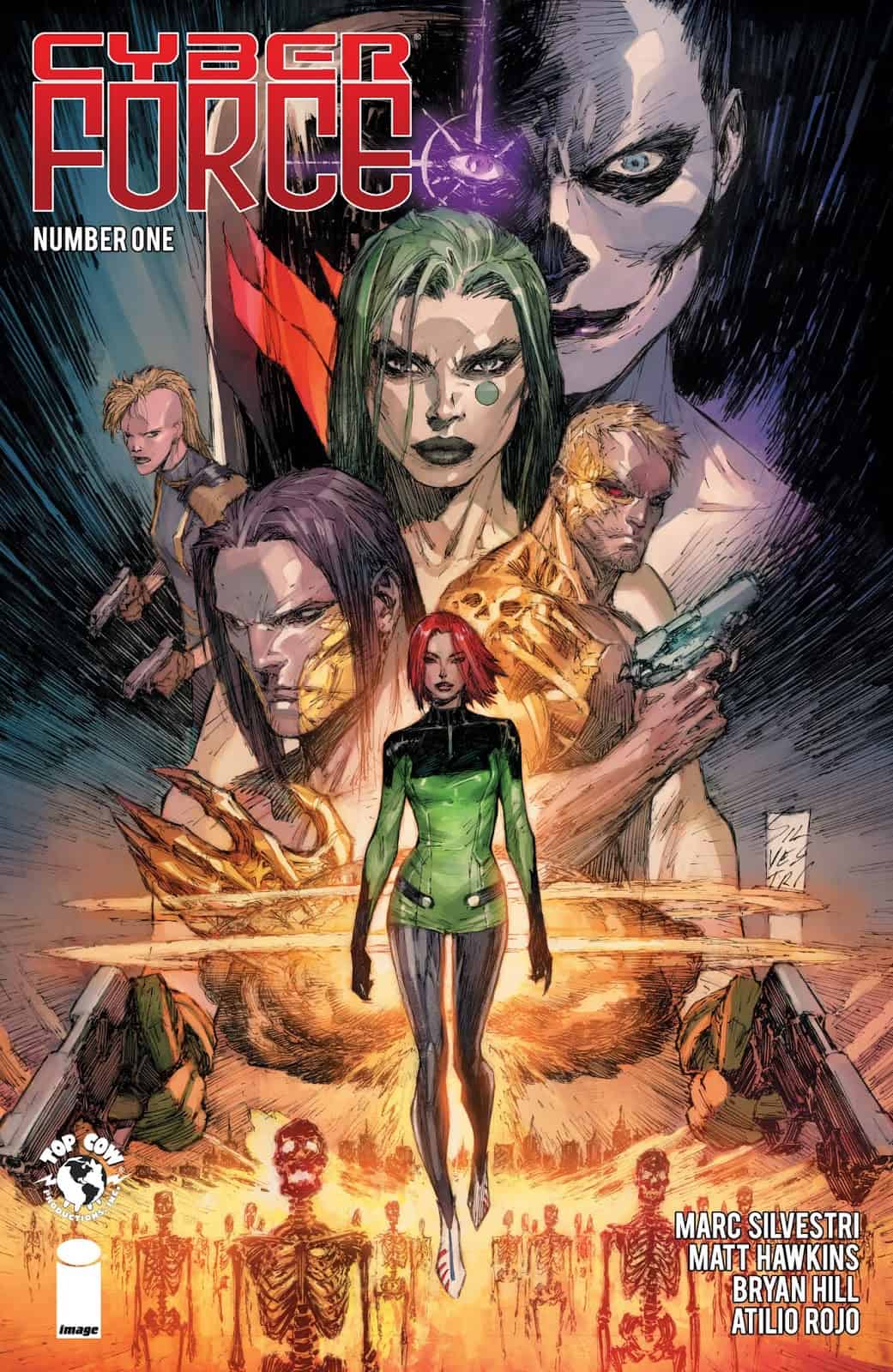 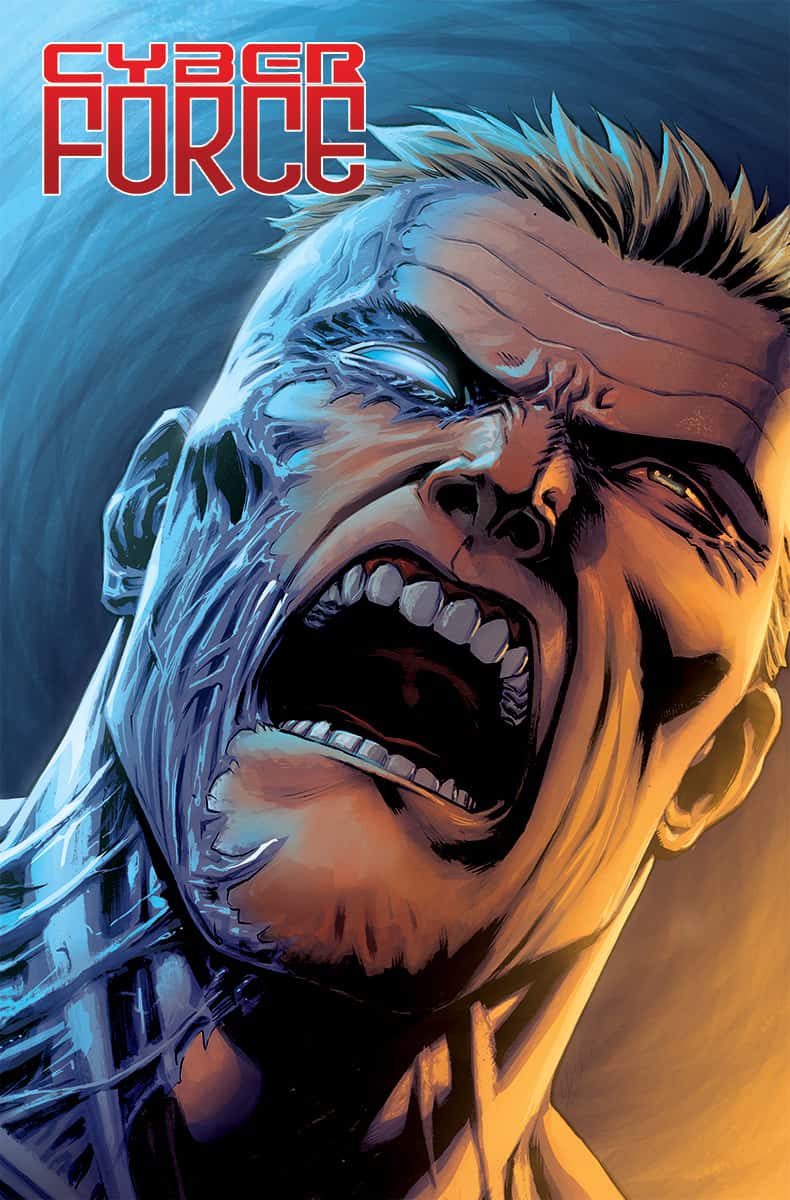 In a modern world where humanity is defined by the technology it creates, a terrorist strikes at the heart of human progress. One of the few survivors of the attack is a man named Morgan Stryker. Mortally wounded, Stryker’s life is saved by his employers…but the price could be his humanity itself.

In Cupertino, CA a black armored cybernetic being overlooks a campus full of people, ready to turn a good day into a bad one. Within moments the largest building explodes, causing death and destruction to rain down. The assassin moves into the building quickly, killing and burning those in their way, shooting a man, Stryker, in both his eye and right arm. Although one eye was blinded, the other shot completely dismembered his entire arm, leaving him slumped against the wall forced to watch the assassin walk away. But for some reason, to Stryker, it seemed that the assassin let only him live… 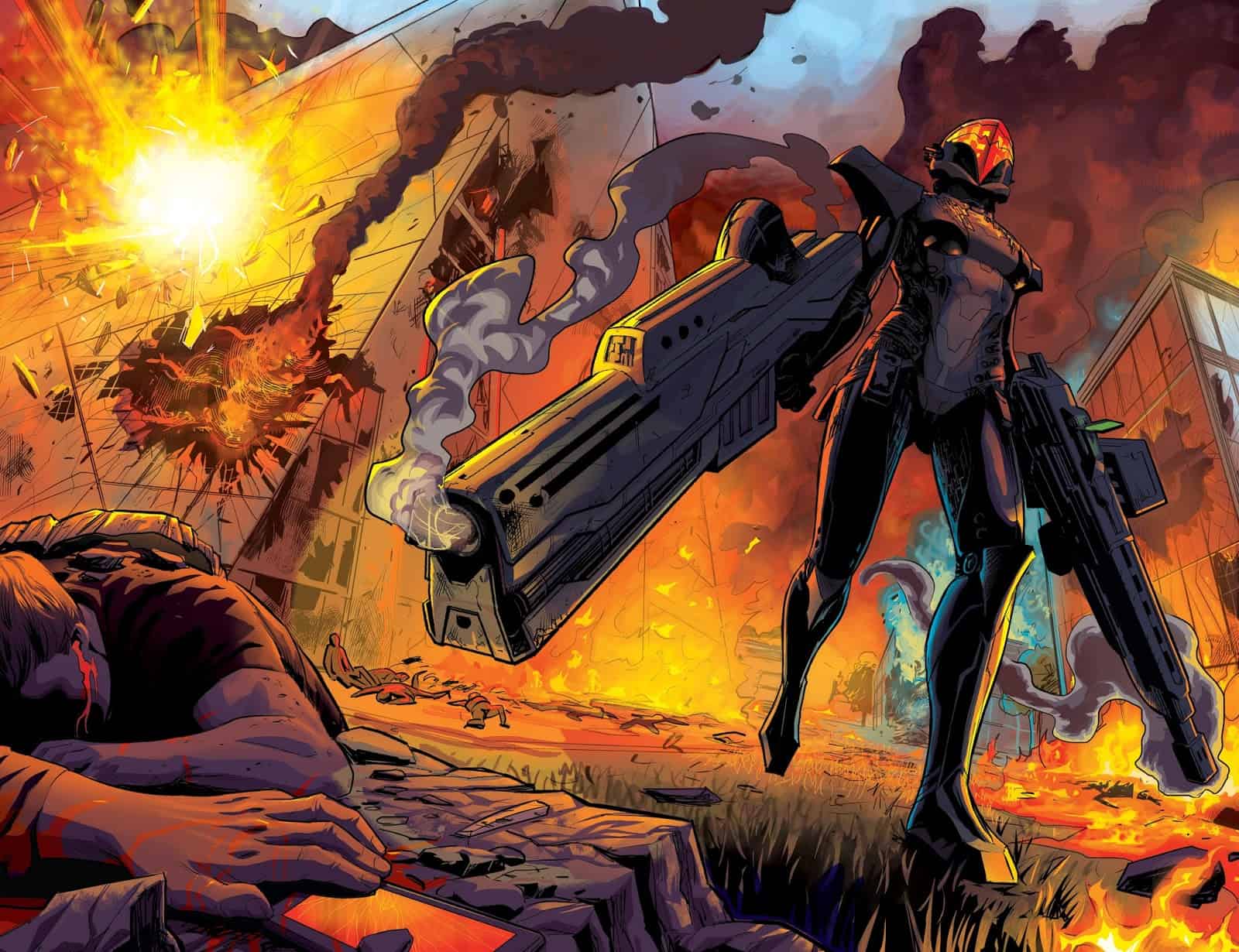 As Stryker struggles to survive in the hospital, the assassin makes a worldwide announcement, declaring themselves to be their savior. To be the firewall against their addiction to technology. However, the assassin proclaims the gods they have made out of machines now have a cruel judgment upon them all. Suddenly, the Microtech Center in Virginia explodes at the end of the assassin’s proclamation. 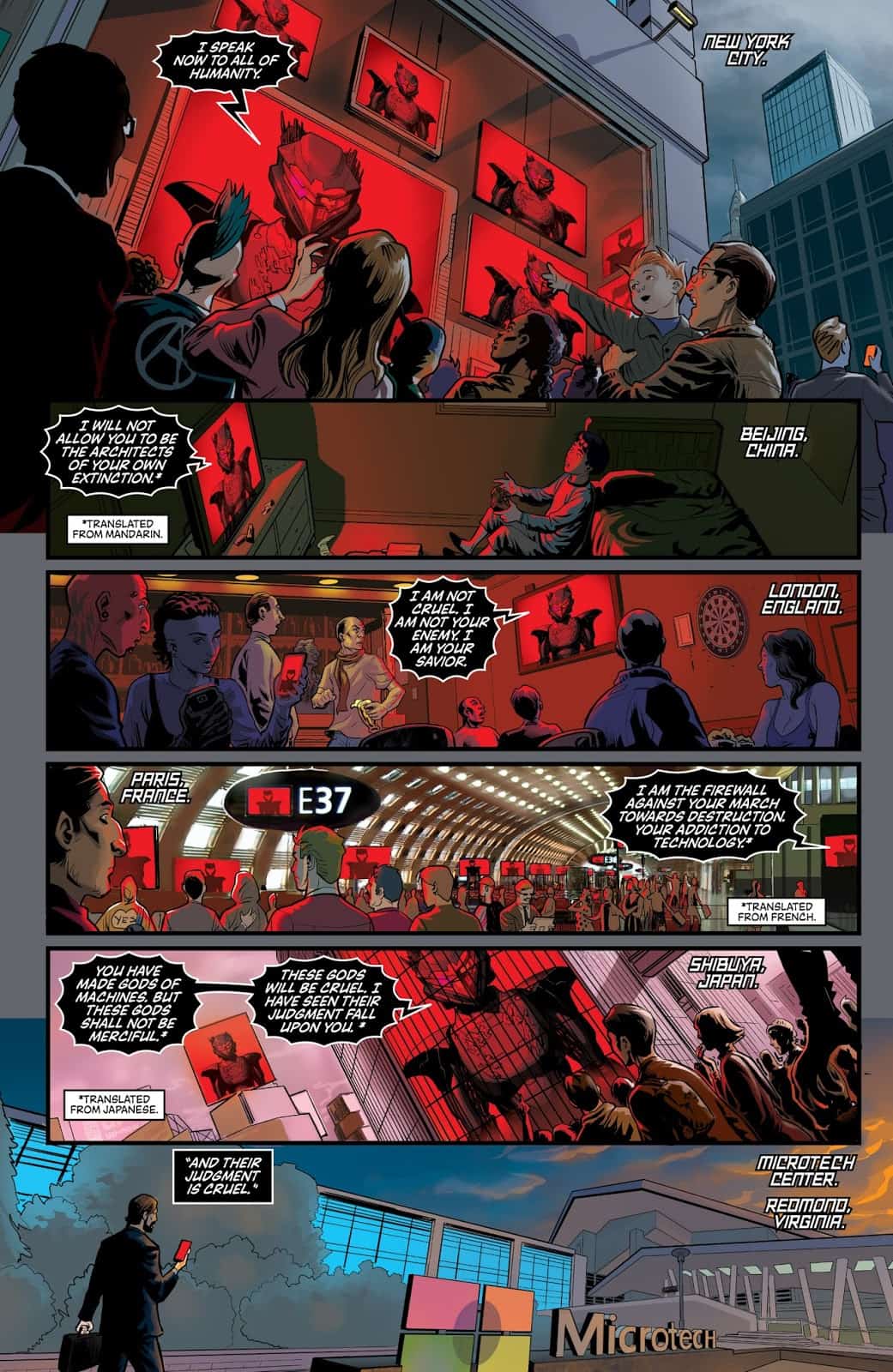 Back at the hospital, Stryker’s daughter Carin, distraught over her father’s condition and eager to save him at any costs, signs with a doctor to save his life and to prepare her own self for surgery. The doctor exits the room to meet with a mysterious woman in the hallway nearby and tells her she finally got what she wanted, it just took a terrorist act to give it to her. The woman wishes the doctor luck with her procedure and leaves the building.

Four weeks later, Stryker is awake and uncontrollably thrashing his room, terrified at the cybernetic enhancements to his right arm and eye… 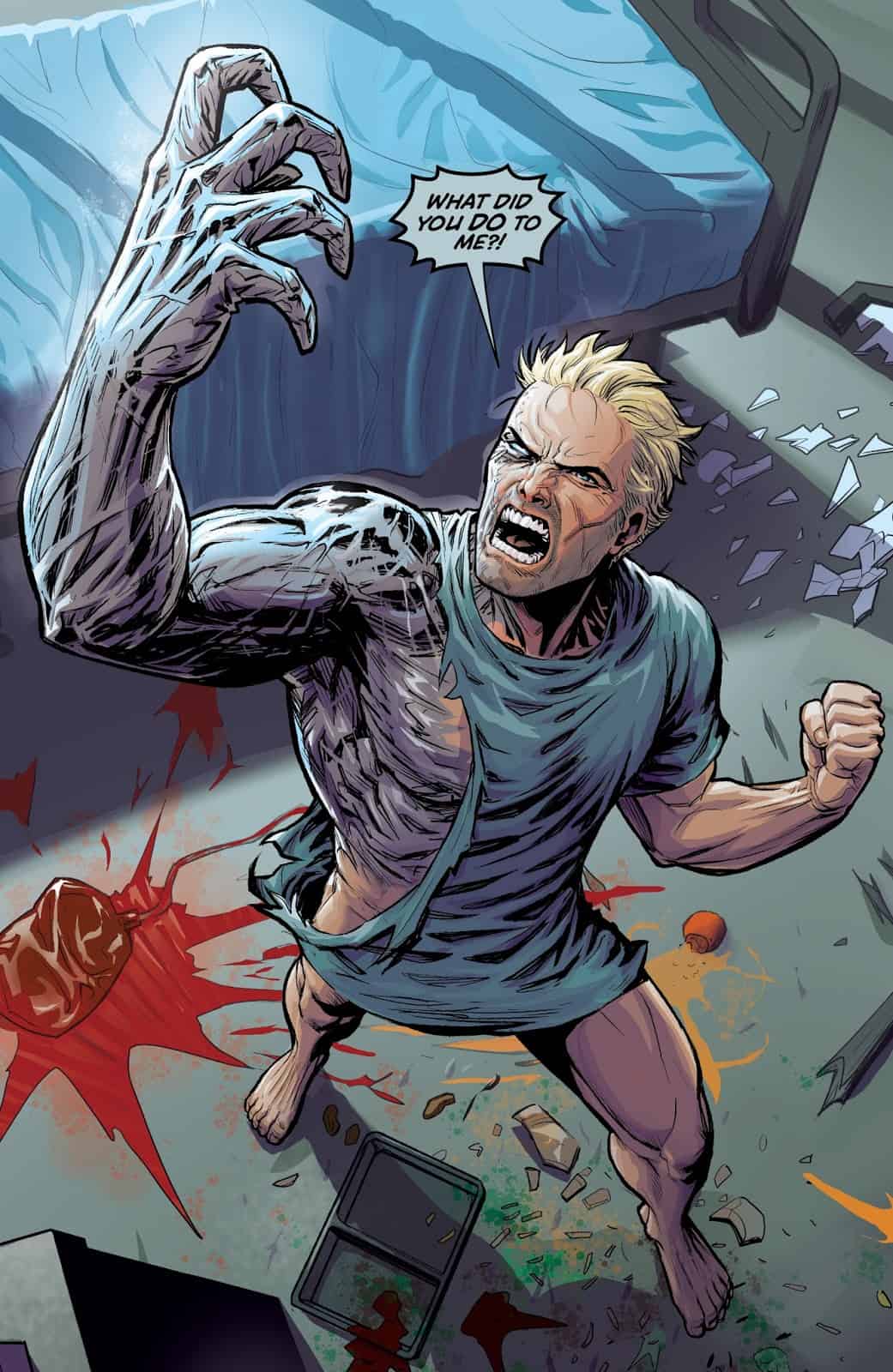 The next week, Stryker is more composed and participating in a therapy session. They discuss his situation before she quickly tells Stryker that his daughter is the one who signed off on the surgery. Stryker becomes furious, saying she was too young to make that decision and that he wants to see her. Their back and forth continues exhaustingly until Stryker breaks down and asks simply what he needs to do to see her.

One week later, Carin is in her wheelchair staring out the nearby windows in the building. She feels Stryker approaching behind her and asks if he is angry with her. He tells her that she saved his life and that he was only ashamed she had to. He tells his daughter what his cybernetic enhancements attached to his body feel like, but she interrupts asking if they told him everything. As Stryker explains that he is just waiting to see who these people command him to kill, Carin says she has something to tell him. Although she is worried that her father will never forgive her, Carin stands from her wheelchair, revealing her cybernetic enhancements from the waist down. 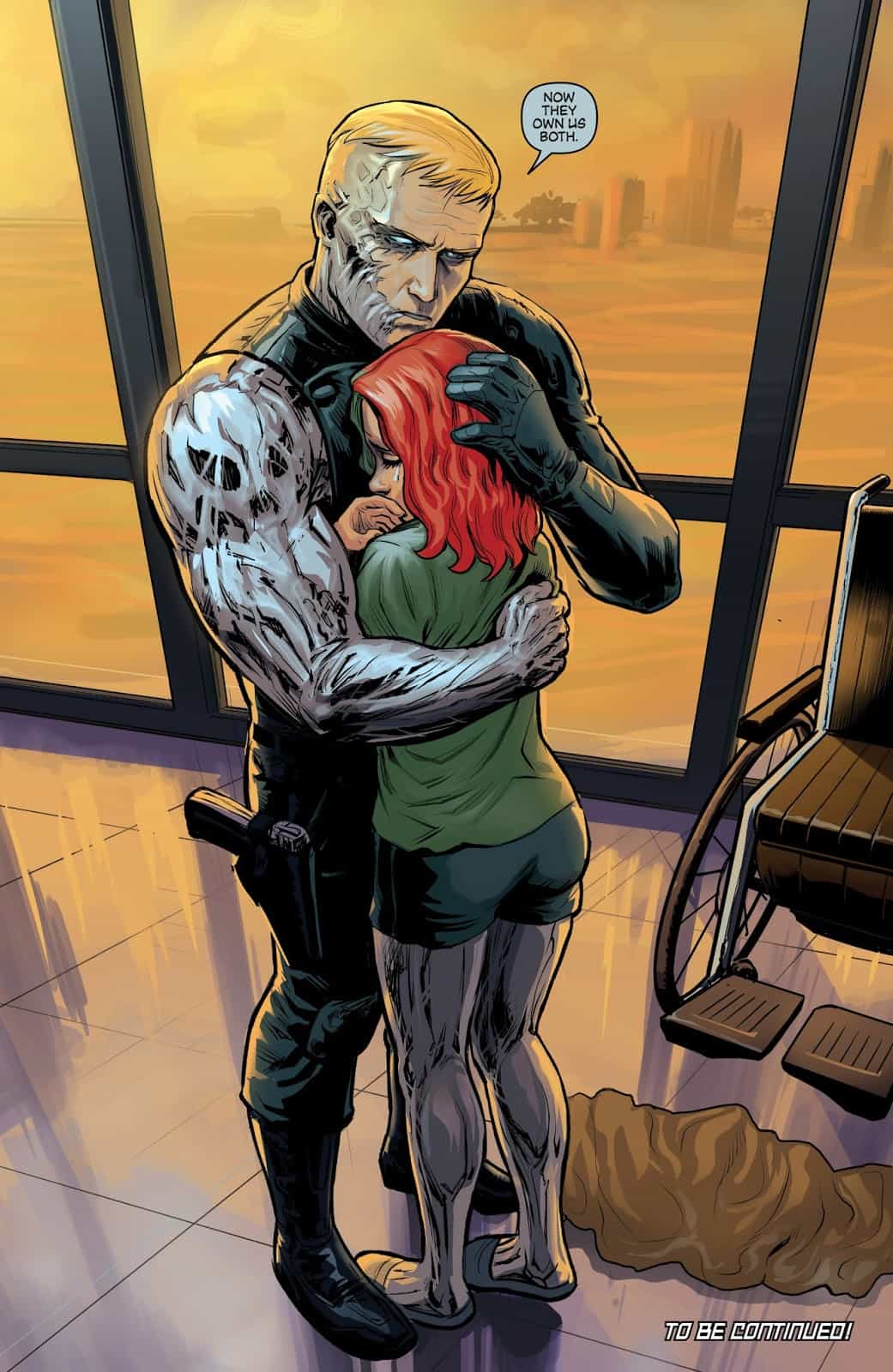 What Just Happened?
Before we get into my thoughts on this issue, I want to begin by saying I am a newcomer to the Cyber Force series, and this issue is a great jumping on point for readers just like me. These are opportunities that I actually appreciate, especially for iconic series from publishers like Image and Top Cow Productions.

During the original creation of Cyber Force, technology was hardly comparable to where we are today. Now that the series can draw inspiration from overwhelming advancements in real-world technology, it is able to find a sense of modern relevance grounded in the relatable narrative of the power struggles between a father and his daughter. This approach allowed the narrative to successfully engage readers with current social issues and classic characters.

Stryker and Carin represent people who seem to be those who are simply in the wrong place at the wrong time. The assassin’s attack devastates their family, and Stryker apparently misses out on their global announcement regarding the judgment of the gods. However, after Carin signed for the procedures for both her and Stryker, readers soon discover that prior events may not have been as random as they seemed. There is a woman potentially orchestrating these events, and although we don’t know the depth of her involvement yet, she will undoubtedly return soon. 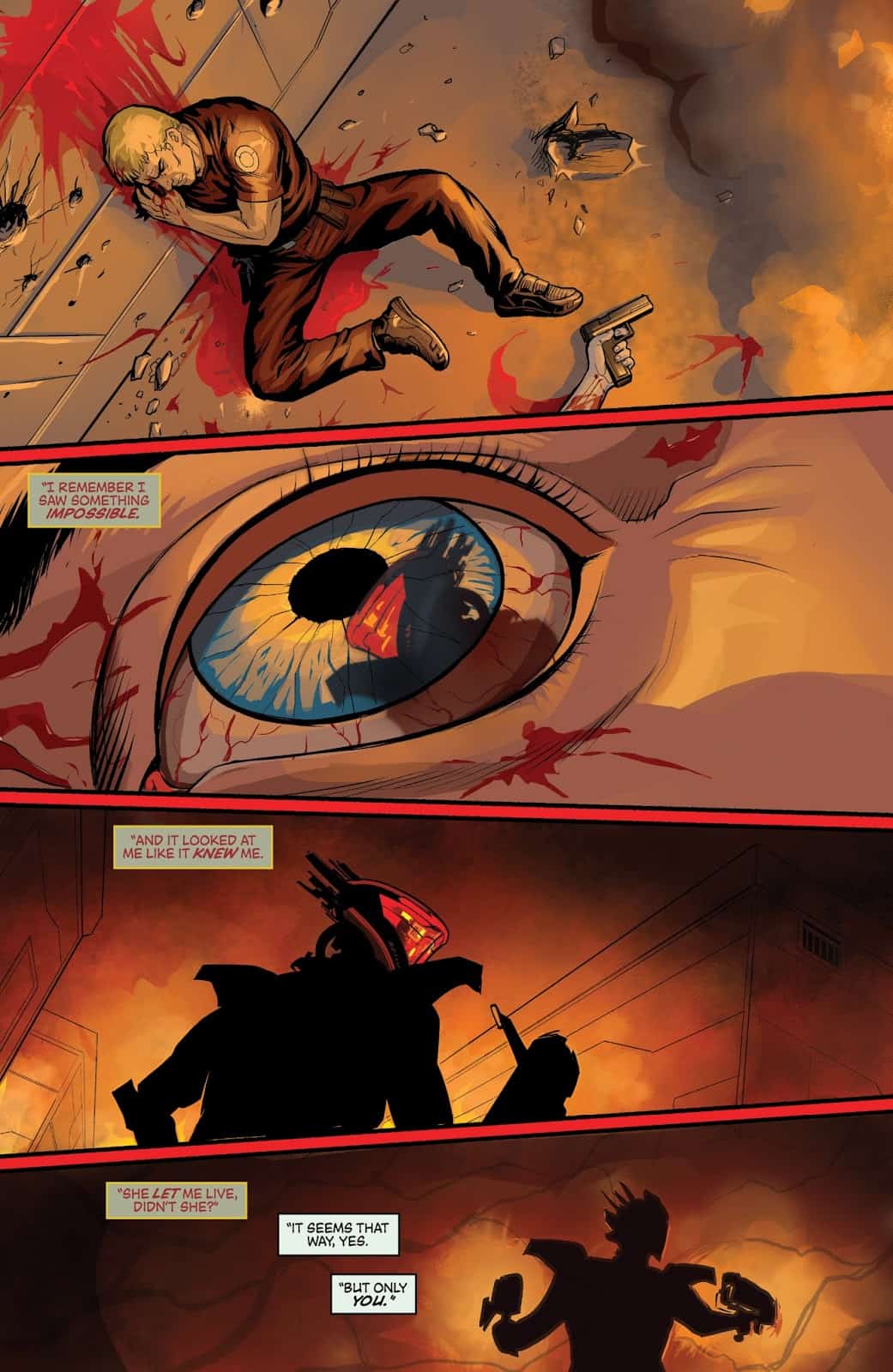 The imagery is truly stunning as the first issue attempts to move at a quick pace to establish basic plot points, unfortunately, at times it can become a bit held down by lengthy dialogue. Overall, the pacing is certainly engaging but more importantly, the first issue will leave readers eager for what’s to come.

With a strong artistic direction presenting a unique aesthetic that is original, Cyber Force #1 delivers modern relevance and emotional character development, all while promising a great story ahead!

Final Thoughts: The revival of Cyber Force is more than just timely, it is an engaging narrative that is executed beautifully. A strong artistic direction elevates the emotional development, conspiratorial undertones, and pure sci-fi awesomeness that Cyber Force #1 offers. It may not be technically a new origin story, but it gave me everything I wanted as a new reader and I can’t wait to see where it goes from here!