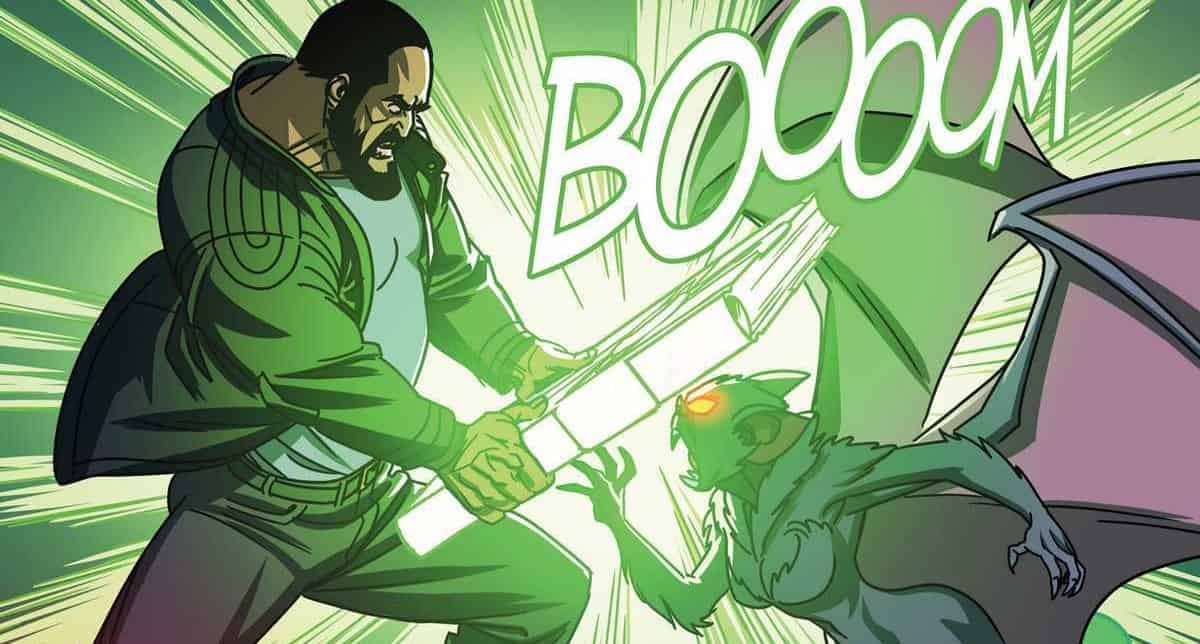 Valla faces her most fierce opponent yet in a clash of strength, both physical and mental, that could determine her eternal fate! 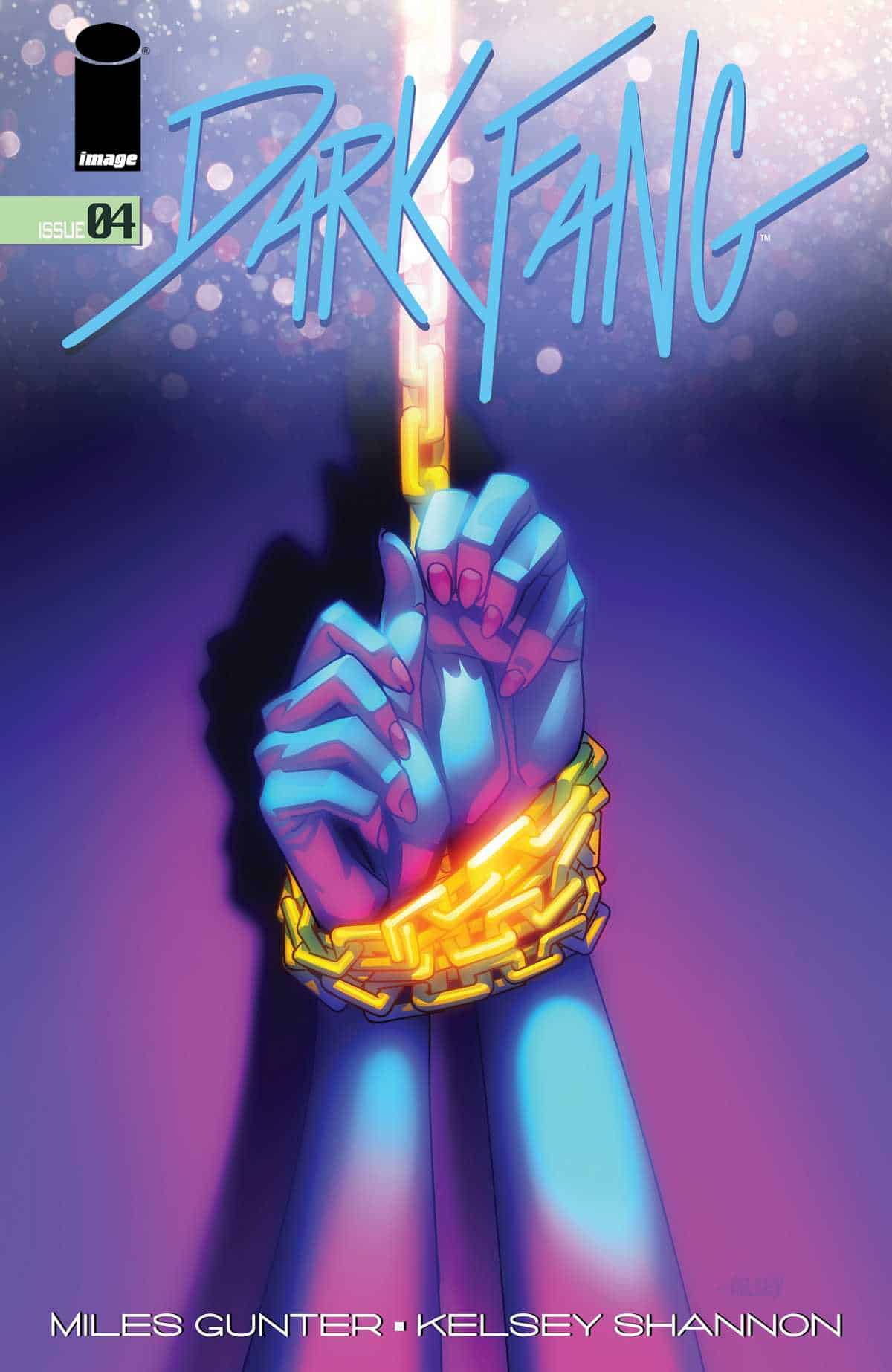 In her merciless quest to stop the poisoning of humanity that has led to her own fang turning black, Valla has left a trail of highly influential bodies in her wake including a CEO for a major oil organization, a senator, and the President of the United States.

Now a mysterious man hired by Director Maddox of the National Security Agency has confronted Valla in her own home, violently striking her to the ground and wielding a book adorned with a massive cross…

Valla’s battle escalates alarmingly fast as she discovers that the man in her home is unaffected by her vampiric powers. She shifts into terrifying forms threatening the man and telling him that he is unwelcome, but he refutes her, claiming to have all of the lights of heaven on his side! Using the Bible that he transcribed himself, he swings at Valla who is charging directly at him. Their clash shatters every window in her castle, and the blast leaves Valla unable to defend herself. 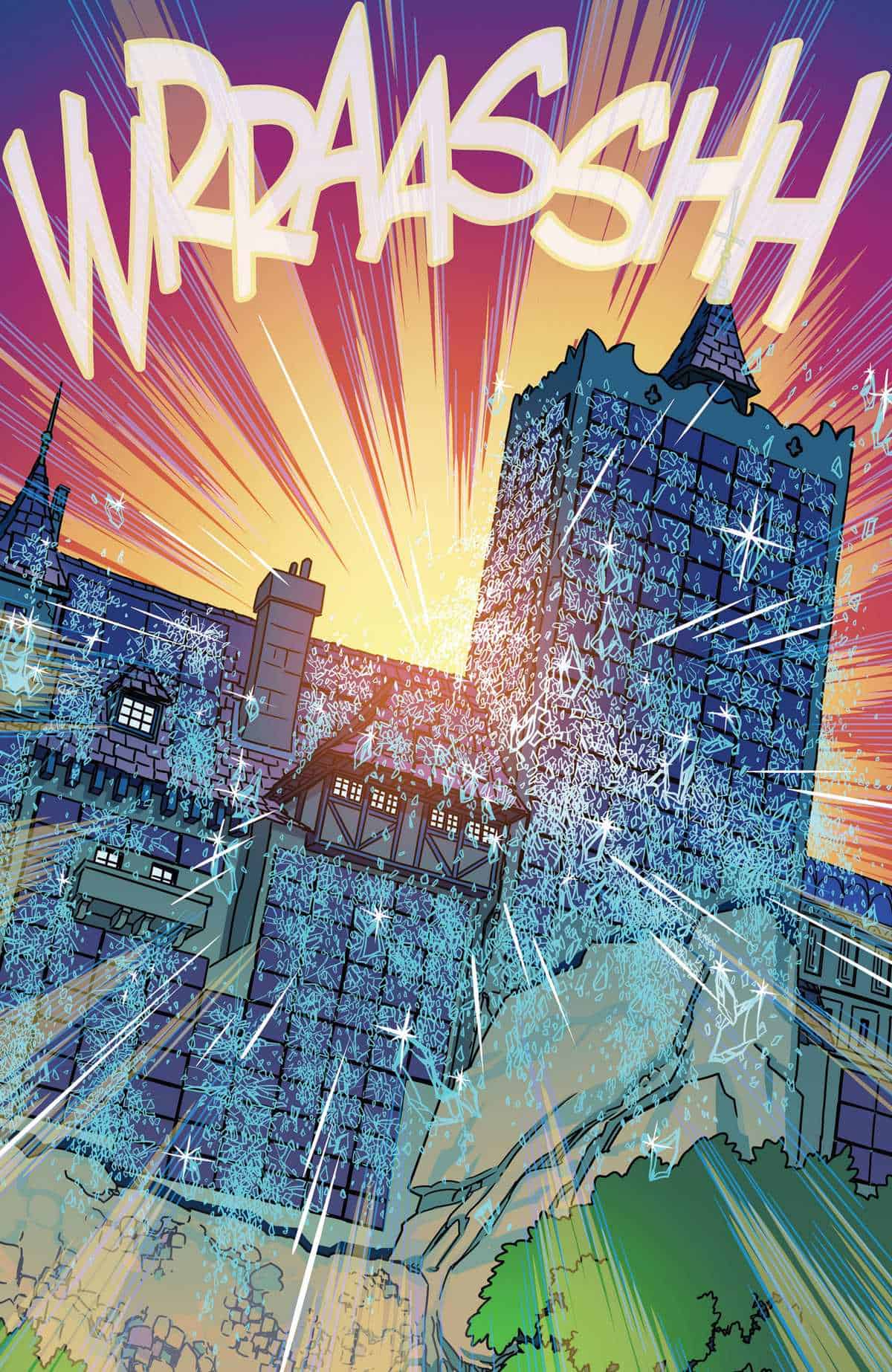 Elsewhere, we are introduced to the mysterious being called Commander Kozar by Director Maddox who is visiting to discuss their arrangement with the religious zealot they hired to take Valla out…

Valla awakens only to discover that she is being held captive by the man who now claims to be the son of a leader of one of seven heavens. His name is Samael, the angel of death. Over Valla’s witty remarks, he describes a being of incomprehensible power before removing his clothes, wishing not to soil his holy garments when he vanquishes her. Then, using a coin to reflect the light behind him, he sears Valla’s right eye leaving it bloody and blinded as consequence of her sarcasm. He doesn’t stop there though, he continues to use the light reflecting from the coin to burn instructions for her eternal suffering onto her own leg. 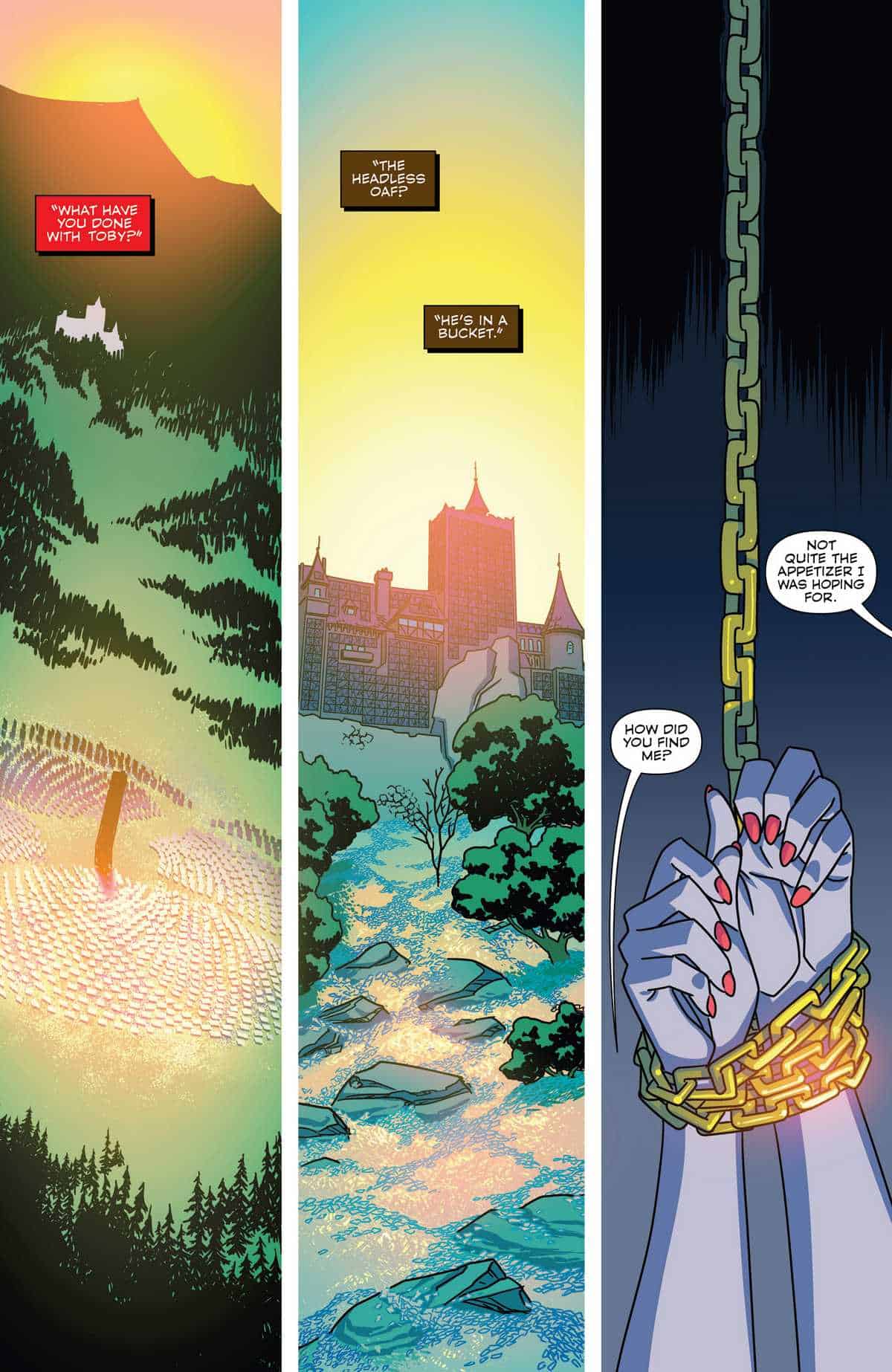 In her pain, Valla describes the poison that has plagued humanity, and how the Earth must be protected from their abuse. Samael laughs in her face though. He believes the Earth is just God’s creation for man to use and tells Valla that she will realize everything she has ever fretted over is just a mass delusion. He tells her that he will allow her to experience this clarity before her demise just so she may know what she will never have, and presents a mysterious object wrapped in cloth and rope…

After consecutive issues of thrilling world-building around Valla and her crusade against humanity’s poisonous desires, the series brings the consequences of her actions down all around her. In the review of the previous issue, we asked the question, just how long can the narrative continue to expand on so broadly? In this issue, we find that rapid expansion halted as Valla is captured and tortured in a private room with just her and Samael. Aside from brief moments exploring Director Maddox and Commander Kovac’s relationship, the issue focuses primarily on the harrowing back-and-forth between the vampire and the holy zealot.

As intense dialogue and battling philosophies take prominence over violent decapitations, the latest issue of Dark Fang manages to feature what could be its strongest artistic direction yet. Artist Kelsey Shannon continues to shine with a distinctive vision and beautiful execution, contributing greatly to the grave tone of the issue as well as the uniqueness of the series overall. 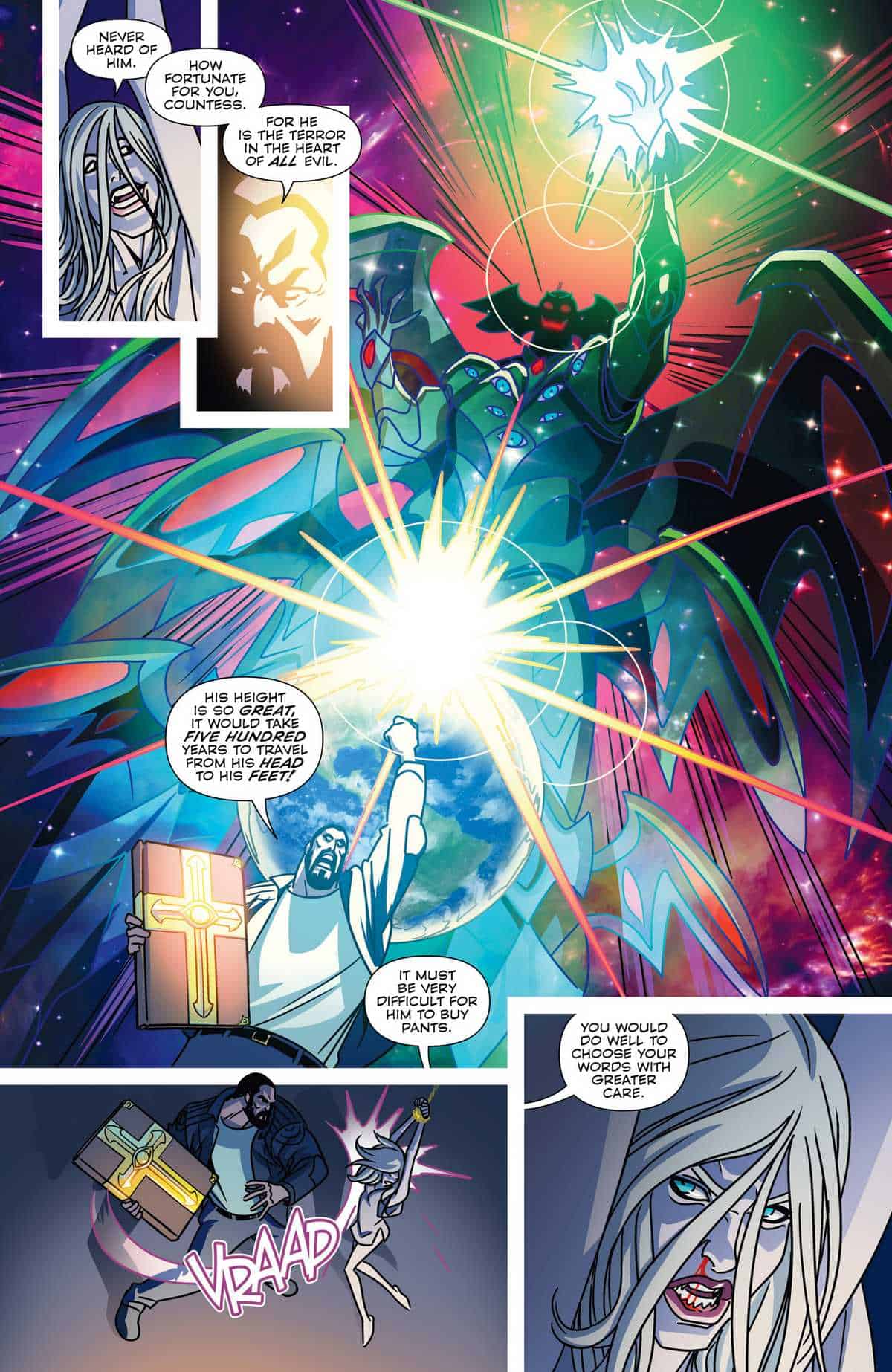 Just as readers are able to gain a sense of Valla’s extraordinary powers, she is thrust into a confrontation with eternal consequences far worse than death. This creates a reading experience that truly enables audiences to comprehend the magnitude of the situation through an honestly shocking introduction of another powerful force. Although she is a vampire who just decapitated the President of the United States, it is curiously hard not to feel empathetic towards her situation, which only speaks to the quality of the story being told.

As Dark Fang elaborates on its social relevance with narrative context frighteningly similar to the conversation surrounding its topics in the real world, it does so without sacrificing the appeal of being an original and simply incredible vampire story of epic proportions. The latest issue may lack expansive world-building, but it maintains all of the remarkable momentum and pushes the series in an unexpected direction that is both well-timed and memorable!

Final Thoughts: Dark Fang #4 finds the consequences of Valla’s actions catching up to her in the form of a holy zealot intent on seeing her demise, presenting an incredibly beautiful and entertaining clash of worldviews that resonates deeply with real-world social issues.