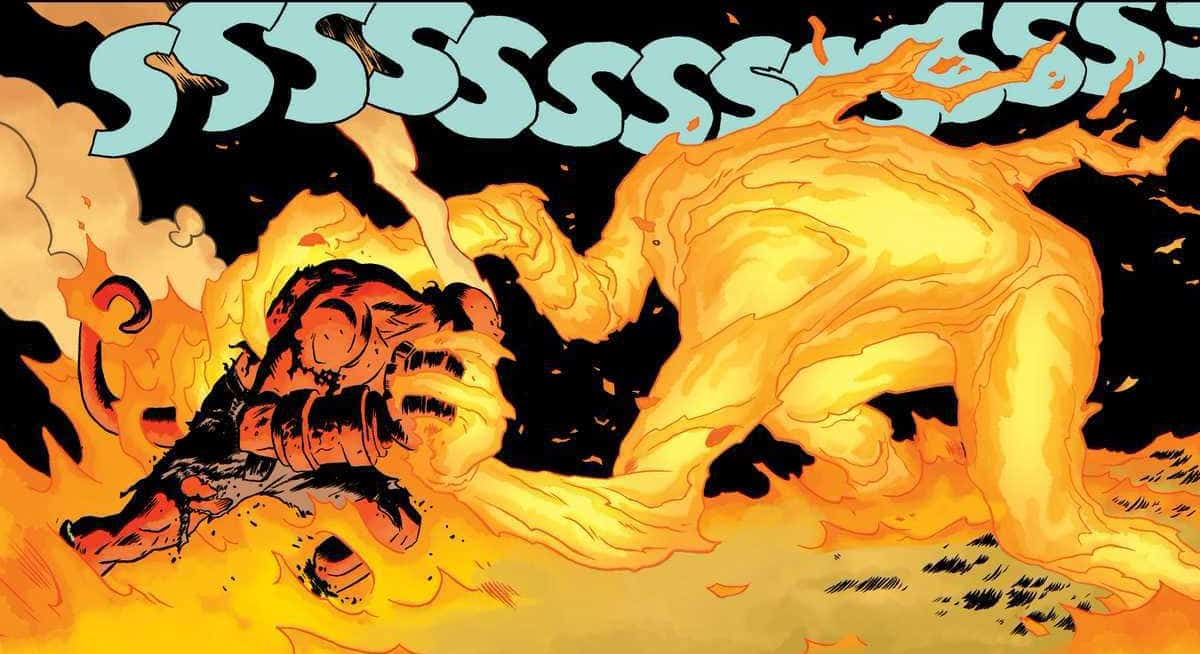 Hellboy and the B.P.R.D. investigate a series of spontaneous human combustion cases, but soon discover a paranormal presence unlike any they have faced before… 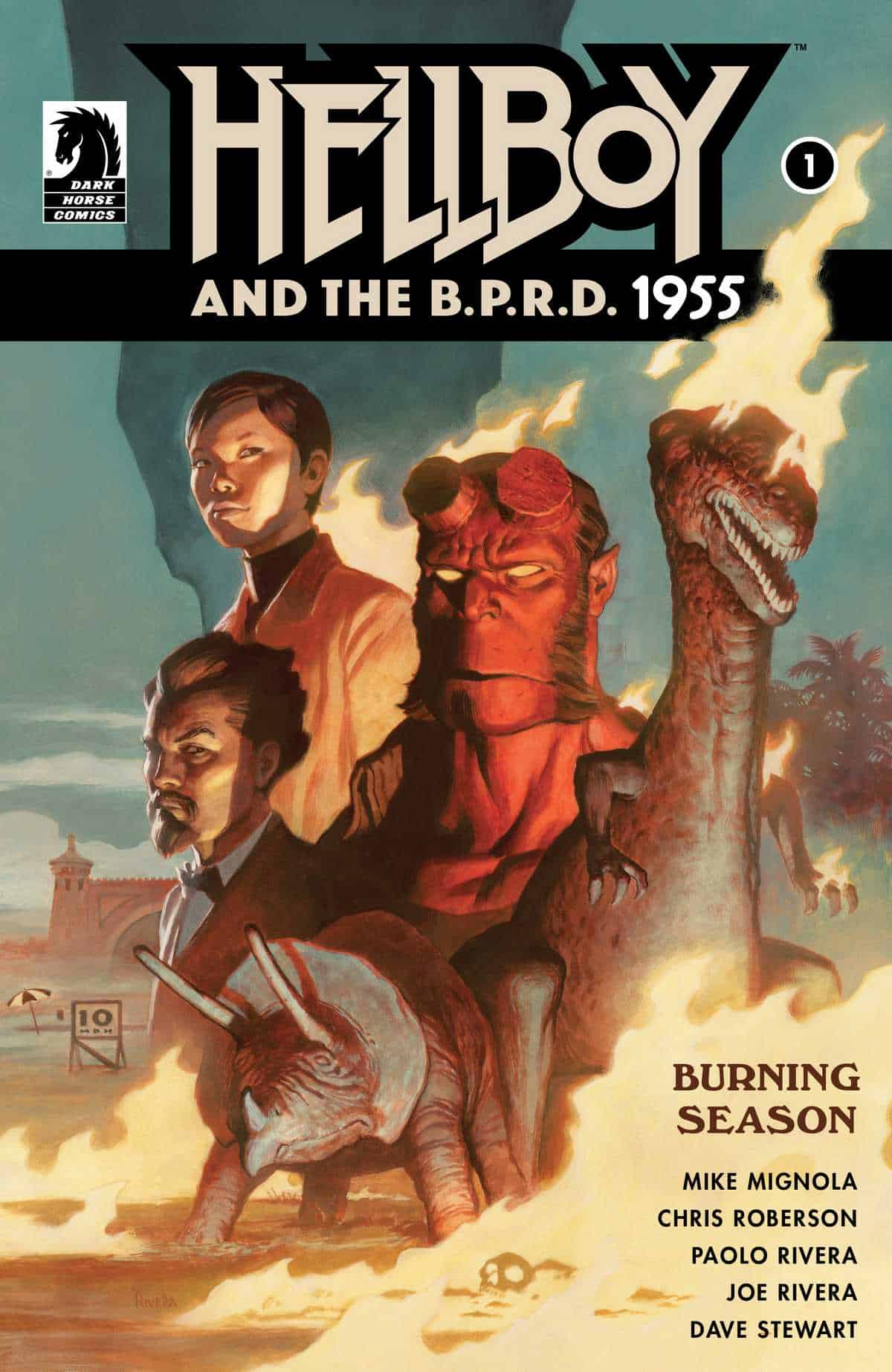 Professor Trevor Bruttenholm along with B.P.R.D. agents Hellboy and Susan Xiang investigate a series of spontaneous human combustion cases in a town in Florida. However, the paranormal phenomena there is unlike anything they have faced before, and the fire has an appetite for Bureau agents!

In Port Orange, FL during October 1955, a couple is lost and in need of directions when they pull over for a quick break. While the man briefly enters the woods, the woman waits by the car attempting to decipher a map. Before he can return, however, she is engulfed in flames where she stands…

Later, Professor Trevor Bruttenholm alongside agents Hellboy and Susan Xian (or Sue), investigate the case where they discover this is the fourth recently unexplained death by fire in the town. They are in what is now known as the Dunlawton Sugar Mill Gardens, surrounded by haphazard statues of dinosaurs and village buildings. As the agents make their way through the scene, Professor Bruttenholm explains the previous cases reported in the area involving an unexplained death by fire when suddenly his own jacket catches fire. Hellboy immediately takes action and extinguishes the flame, but the outburst only proves the existence of a paranormal presence. 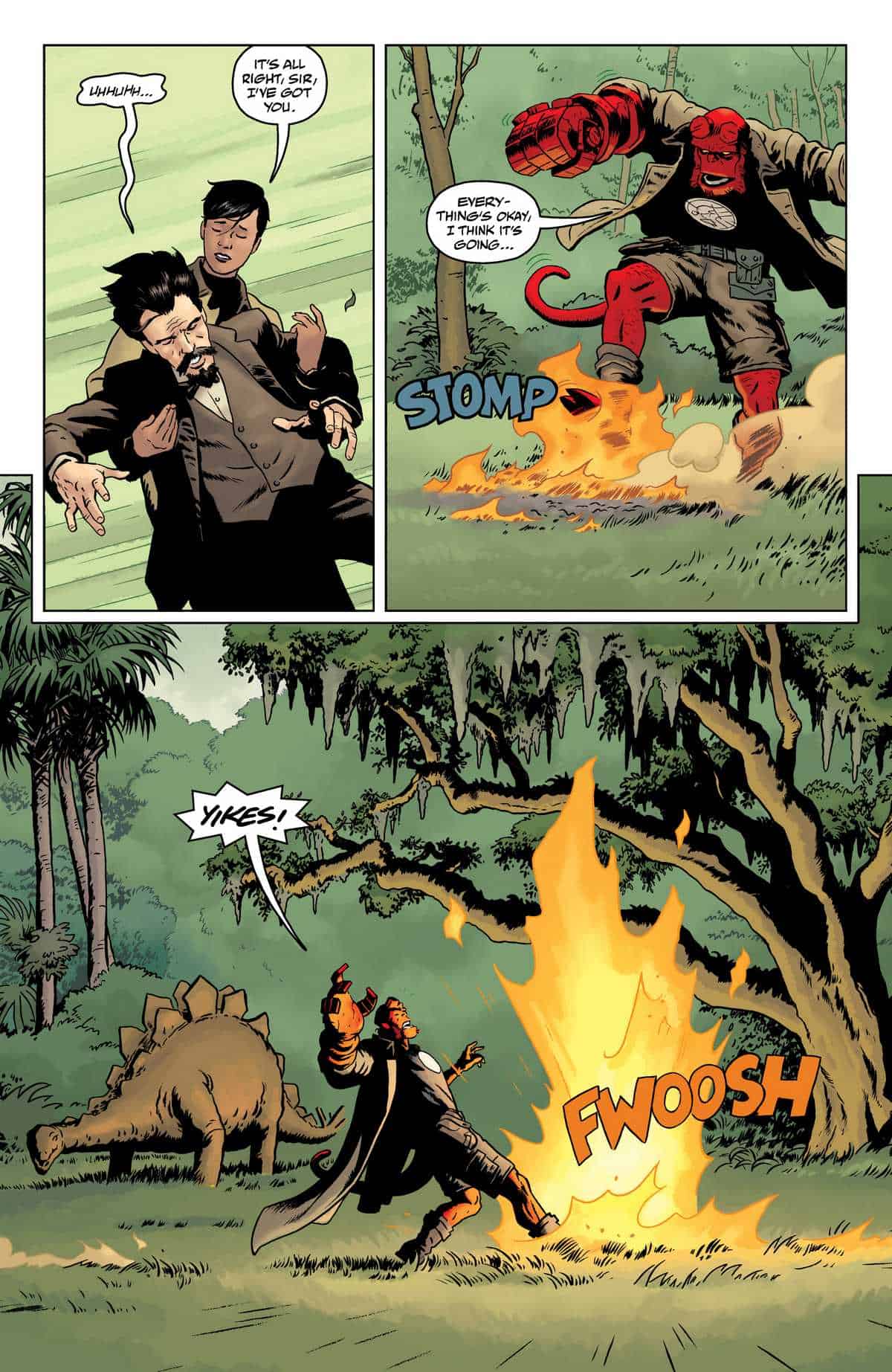 Back at their own place beside the beach, Professor Bruttenholm recounts the tragedies that have occurred nearby which could be inciting this incident. From the original inhabitants being wiped out by the diseases of explorers, to The Sugar Mill Plantation slavery revolt that resulted in the Seminole being forced to endure the Trail of Tears. The group quickly decides to investigate the area once more.

Back at the ruins of the sugar mill, Sue uses a trident that she believes focuses her third eye, allowing her visions to last longer. Just as they feel the presence around them, Hellboy becomes engulfed in flames. As he fights against the fire, Sue receives the vision of an oak tree surrounded by fire, with images of death all around it. The pain lingering from the Timucua to the Seminole burns so profusely, even Hellboy can not wrestle the flame down. As the fire takes shape and fights against Hellboy, Sue tells him that it isn’t a spirit. That this place remembers all of the suffering that has happened. Hellboy stops fighting, submitting to the fire around him, and quelling its anger before it suddenly extinguishes. 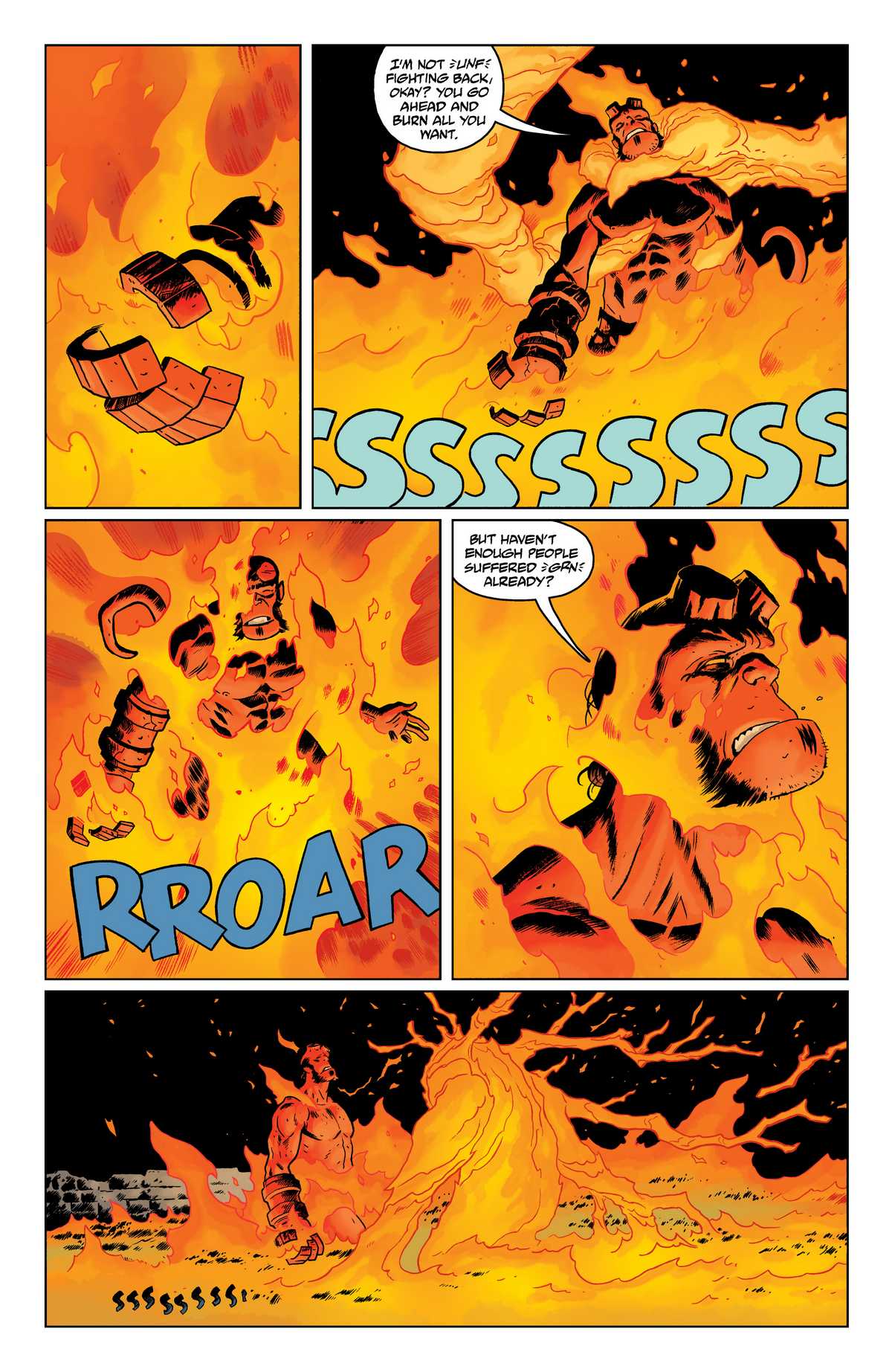 As the group finishes the night off with a meal beside the beach, Sue explains that Hellboy stood no chance in fighting against centuries of pain, that he could only acknowledge and remember it.

In the latest Hellboy and the B.P.R.D. one-shot, we find Professor Bruttenholm alongside agents Hellboy and Sue exploring a paranormal presence in a remarkably depicted real-world setting found in Port Orange, FL. With a story by Mike Mignola and Chris Roberson, the narrative draws on the actual history of the location known now as the Dunlawton Sugar Mill Gardens. This place actually features not just all of the dinosaurs seen throughout the issue, but also the Confederate Oak that was seen ablaze in Sue’s vision. This burning oak serves as a beautiful visualization of the pain suffered throughout history at that very location, inspiring an instant classic in the Hellboy Universe.

The pacing of the story is unusual, as I found myself questioning the story’s capability to wrap-up nicely towards the end. However, in a way that is unique to the Hellboy Universe, the narrative concludes with perfect insight, framing the entire story with fascinating perspective. The use of a non-vengeful presence suits the historical tragedies within the story, allowing for the issue to find its heart within the real pain experienced. 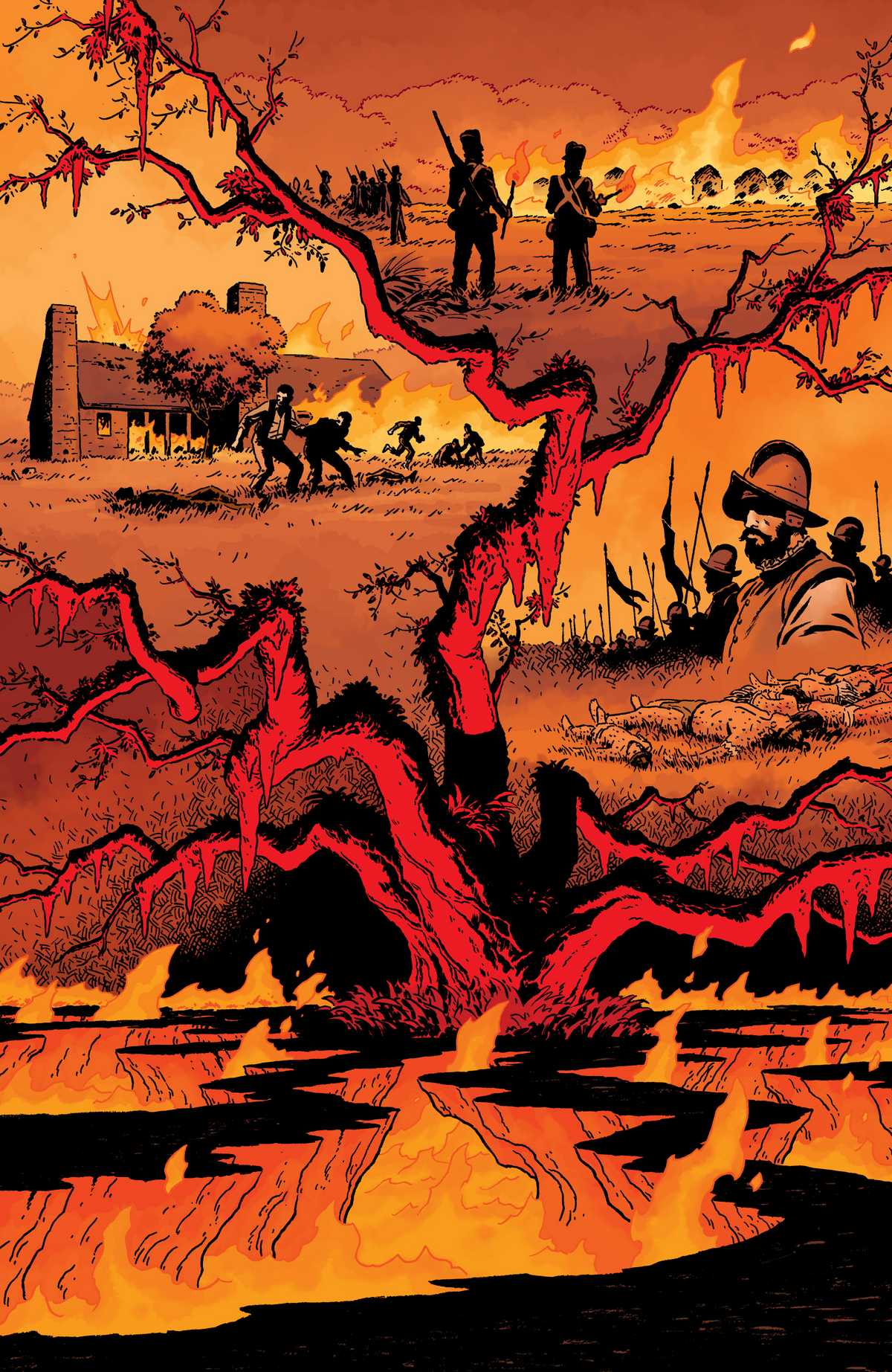 The artistic direction is undoubtedly well within the expectations for a story of this caliber in the Hellboy Universe. The heavy use of blacks found in nearly every panel accentuated by vivid colors enables a familiar reading experience while also remaining unique enough to differentiate the story from Hellboy’s other cases.

Overall, this issue manages to capture the essence of what makes the Hellboy Universe so distinctive and compelling. With a classic story inspired by historical events alongside a beautiful artistic direction, the latest issue of Hellboy and the B.P.R.D. 1955 proves to be yet another phenomenal entry in the Hellboy Universe.

Final Thoughts: Hellboy and the B.P.R.D. 1955 – Burning Season is a superb representation of the unique entertainment and insight that can be found within the Hellboy Universe. Inspired by historical tragedies and their real-world locations that can be seen today, the story finds incredible heart in the pain of the past and the power of remembrance.