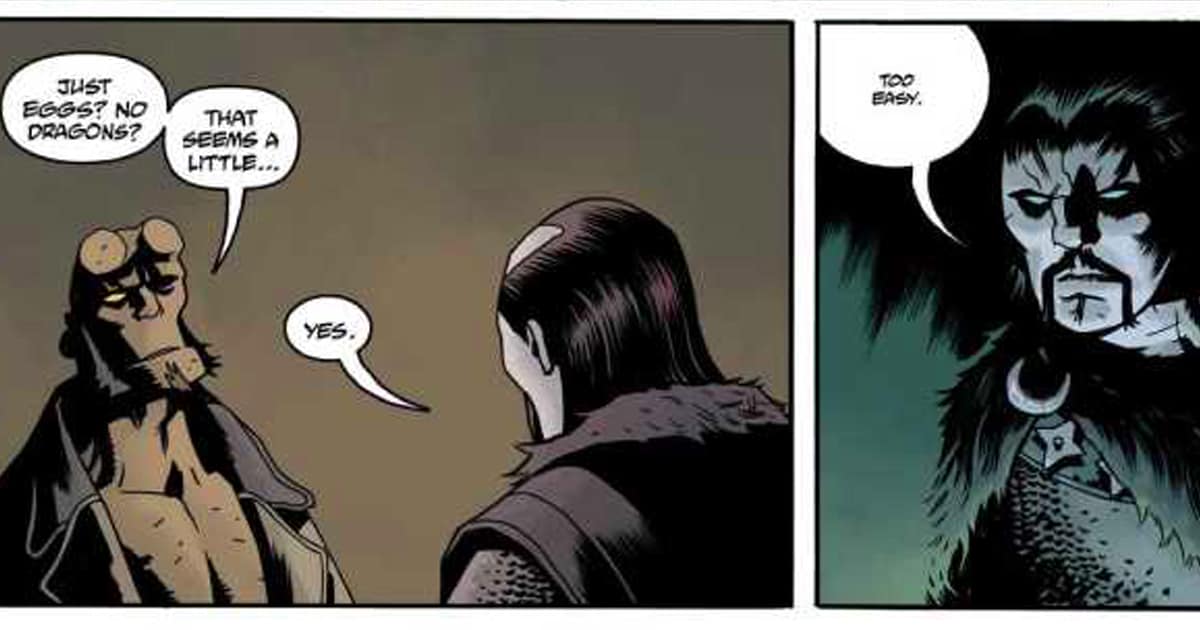 The origin of Koshchei the Deathless continues as he tells Hellboy of his journey to confront the dangerous dragons that Baba Yaga warned him about! 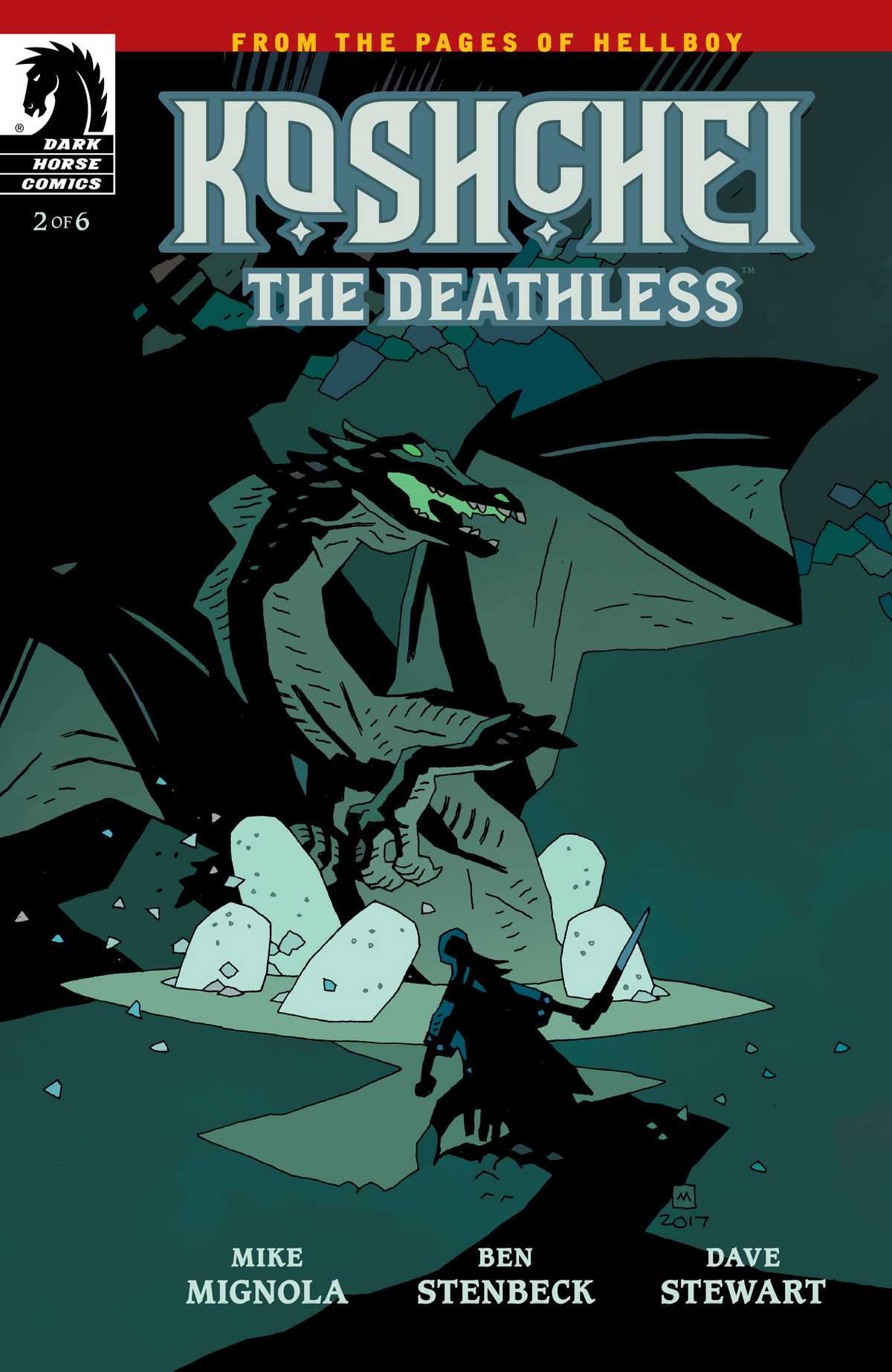 Now somewhere in Hell reminiscing in an old tavern called the Drunken Limpet, Koshchei explains to Hellboy his own tragic origins. Of how he was once just a common man who was beaten to near death before being saved by dragon walking in the woods. This dragon soon gave him the magic shirt that allowed him Koshchei to live unharmed. Eventually, however, a deceitful lover of Koshchei stole his shirt and had him chopped into pieces and thrown to the woods. But the dragon found him again.

The dragon managed to revive him, but with no magic was forced to separate his soul. So Koshchei hid it. He placed his soul inside a duck, inside a rabbit, inside a goat, inside a tree on an island just beyond the edge of the world. Then, Koshchei set off on a quest of violent revenge that eventually led him to the Baba Yaga. It was here that he learned of the dragon’s immense danger, as Baba Yaga tells him he must kill the remaining pair of dragons and their seven eggs to not only save mankind but also himself. Following Baba Yaga’s instructions, Koshchei chooses those most loyal to him and draws a circle around them, only to watch as the rest of his men are slaughtered by giant birds…

Back in the Drunken Limpet tavern somewhere in Hell, Koshchei continues retelling his origins with Hellboy. He explains that the birds spared those he chose, and without much hesitation, they followed the string given to them by Baba Yaga to lead their way. As they make their way into the woods Koshchei tells the group that Baba Yaga said along the way they are to find a man whose father was a fish and whose mother was a cow. Just as the group questions the absurdity of Koshchei’s claims, the string rolls up to a stranger in the forest. 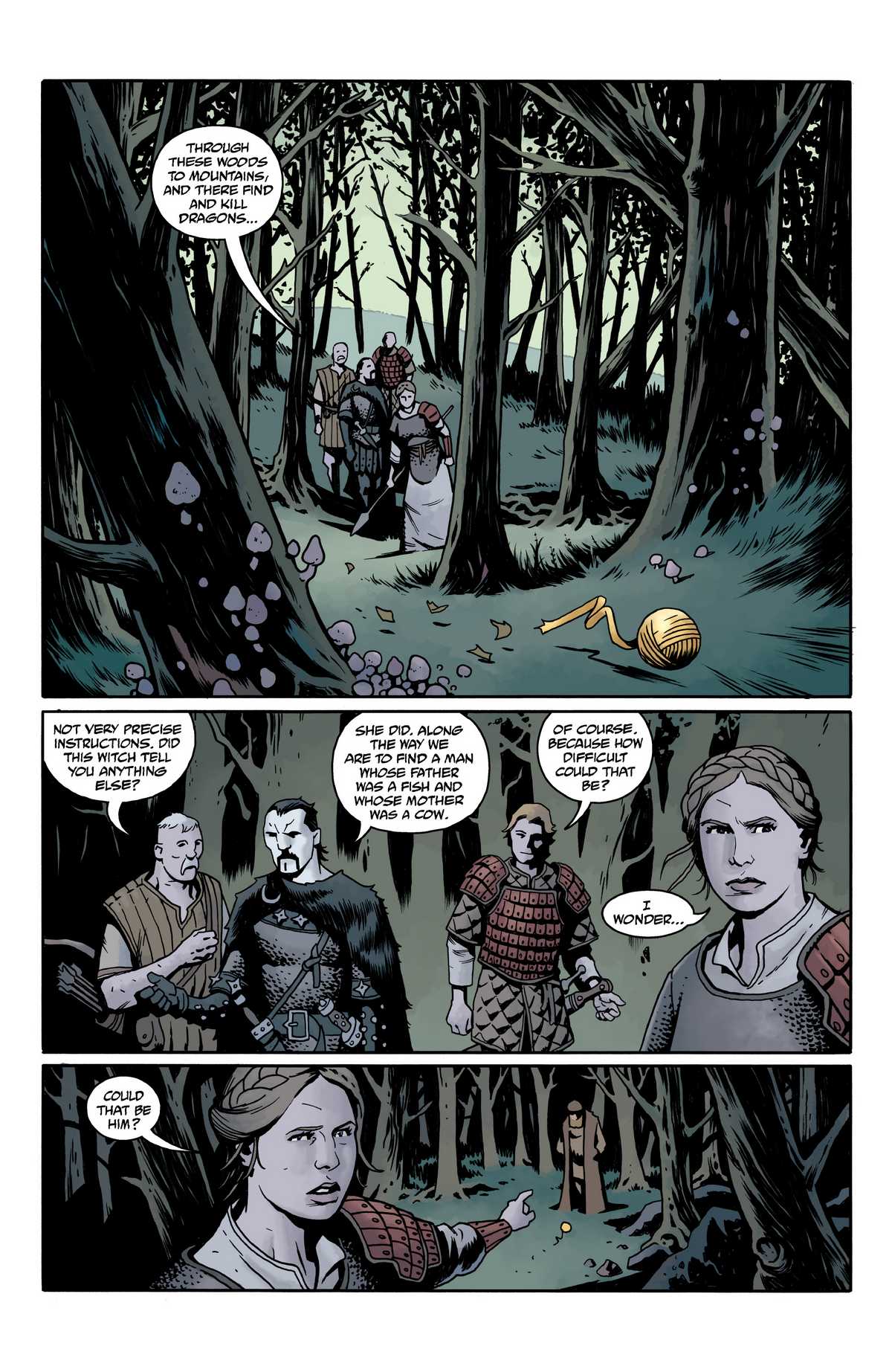 This man is Leshii, a protector of the woods, and he tells Koshchei the story of a queen who could bear no sons but was told by a witch that a certain magic fish could help if eaten. So, the fish was caught and gutted by the cook who threw its guts to only to be eaten by a cow. The chef prepared the fish but could not resist the urge to taste it before serving the dish to the queen. The next morning the cow, the cook, and the queen all gave birth to sons. He tells Koshchei where he can find this man he seeks and leaves him with a warning to not trust Baba Yaga and to follow the rules of his woods…

Koshchei continues on before shortly coming across the man whose father was a fish and whose mother was a cow, and he tells Koshchei the story of his own loss due to the savagery of dragons. Ivan had lost his family to them, and now he also hopes to see their death. So, he leads Koshchei to a man named Dimitri who could know where the dragons are. It turns out, however, that Dimitri died several days ago, and the group is forced to find him just before he is laid to rest.

Dimitri comes out of the coffin, but he is not a man, he is a snake. As he leads the group to the dragons, he explains how they tricked him after he found their cave of treasure, costing him his entire lifetime in what felt like merely days. Soon the group reaches the dragon’s cave, only to discover the remains of all those who have tried to enter. Ivan finds the skeletons of his family, but Koshchei finds something much more important. The seven eggs. 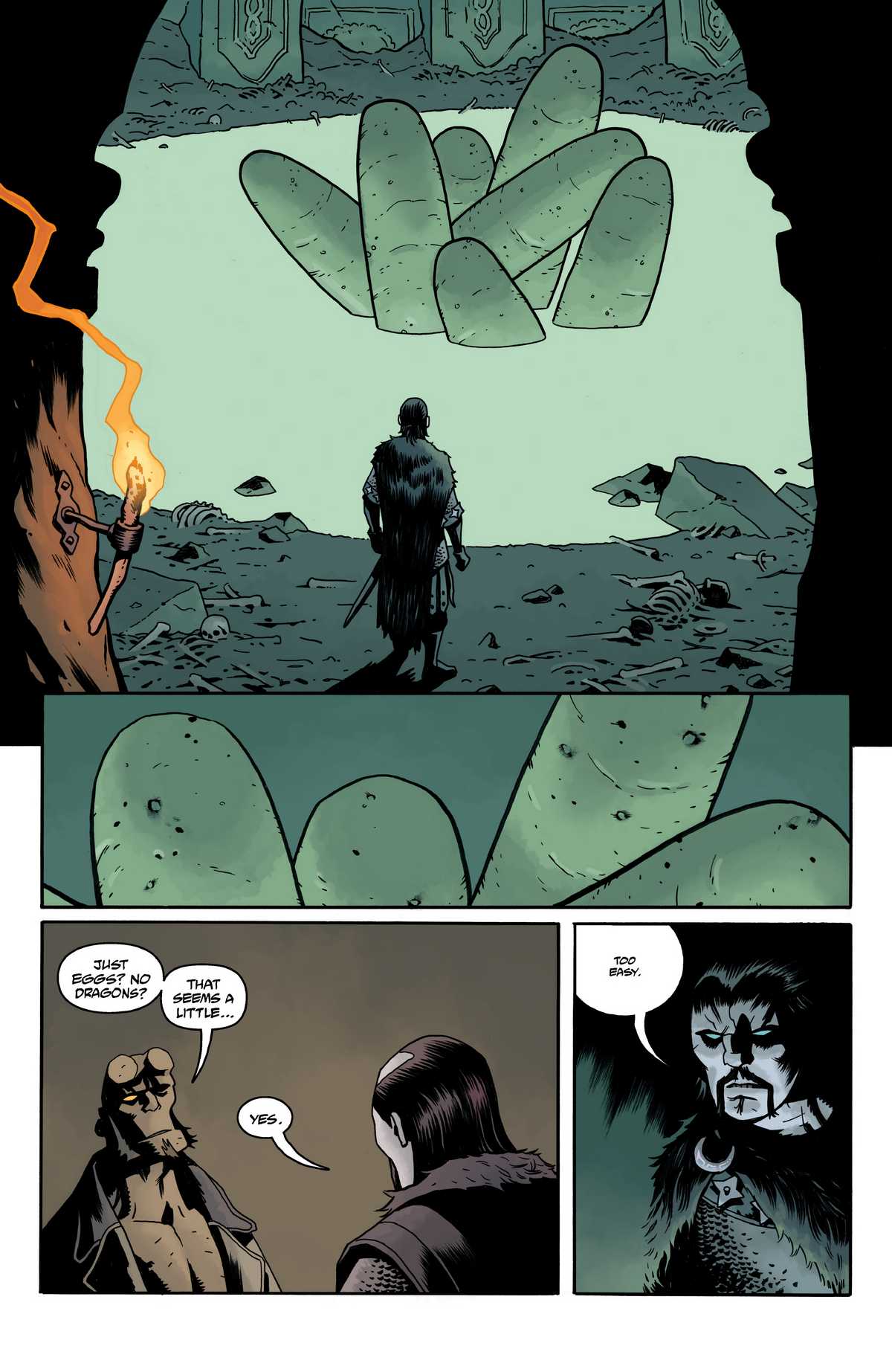 This turns out to be too good to be true as a grown dragon quickly emerges to kill the group. After a fierce battle with the dragon, Ivan manages to sever its head, but the eggs begin to hatch immediately after its death. Koshchei remembers Baba Yaga’s words, to save humankind and to save himself, he must kill the last of the dragons.

With one full-grown dragon and seven hatchlings slaughtered before them, Koshchei the Deathless sees the last dragon before him. The very same dragon that saved him so long ago…

Drawing on extensive Slavic folklore, writer Mike Mignola delves deeper into the origins of one of Hellboy’s most notorious villains in the latest issue of Koshchei The Deathless. With the plot framed by a simple conversation somewhere in Hell between Koshchei and Hellboy himself, the narrative is able to successfully weave strange tales that progress the story in ways that only the incomparable Mike Mignola can. 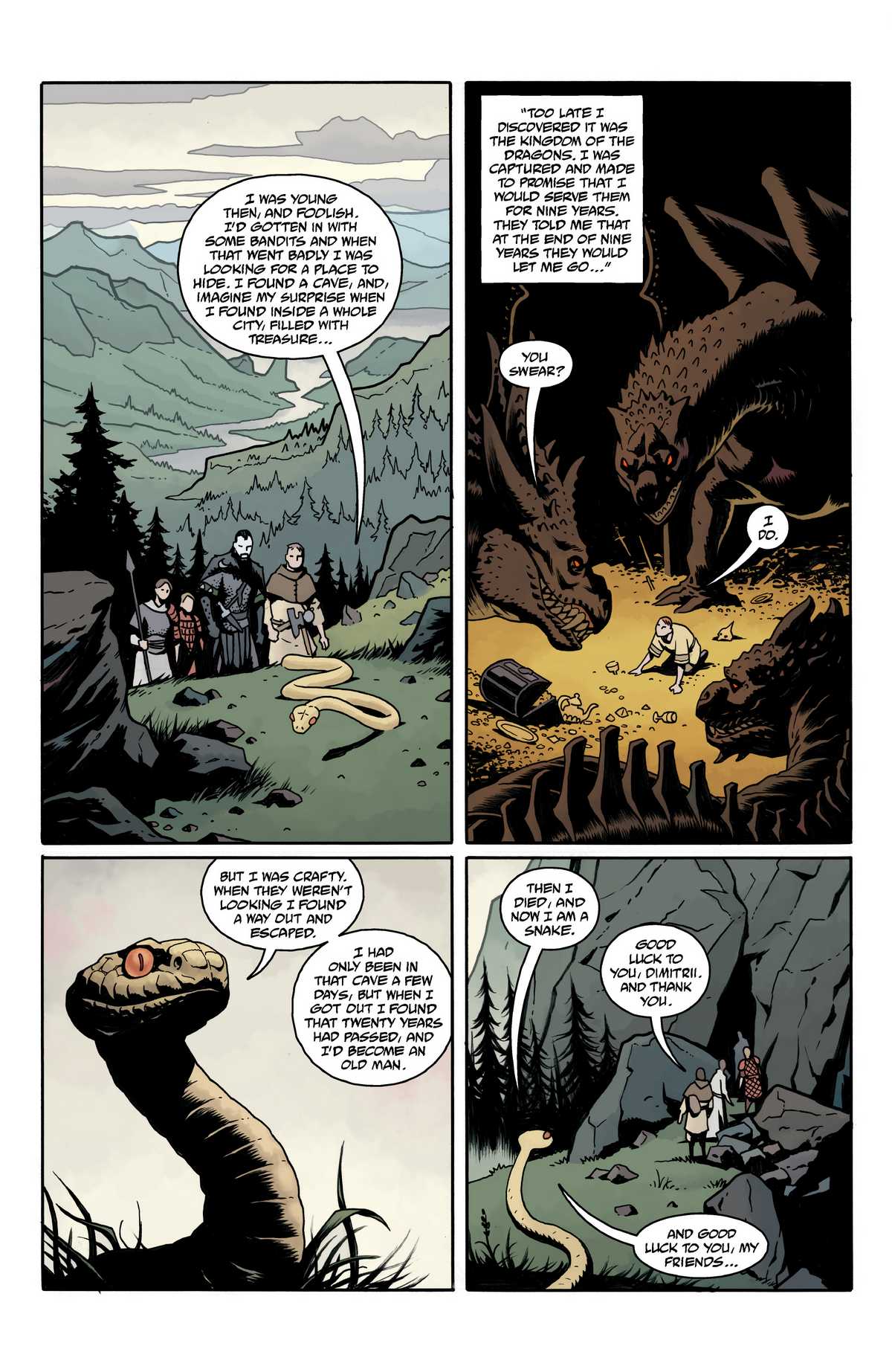 The artistic direction from Mignola’s longtime collaborator Ben Stenbeck grounds the story in the Hellboy Universe with the instantly recognizable heavy use of darkness and a distinctive color palette. Though lacking in detail often found in modern comics, the artwork remains true to the unique tone found throughout the Hellboy Universe.

The prominence of folklore of all kinds in Mignola’s work continues in this series, sometimes to an overwhelming point though, where even Hellboy has to stop the conversation to fill in narrative gaps. While they offer brief moments of humor, the reading experience does require participation and engagement to truly be enjoyed to its maximum potential.

For those who are familiar with Hellboy and Mignola’s work in general, this series continues to successfully expand on the acclaimed Hellboy Universe with incredibly unique storytelling and quintessential artwork.

Koshchei the Deathless #2 quickly proves the series is more than just a worthy spinoff. It is a profound story that delves into previously unexplored areas of the Hellboy Universe with distinctive beauty and intricacy while promising more great things to come!