REVIEW: Rasputin: The Voice of the Dragon #4 (Into The Catacombs) 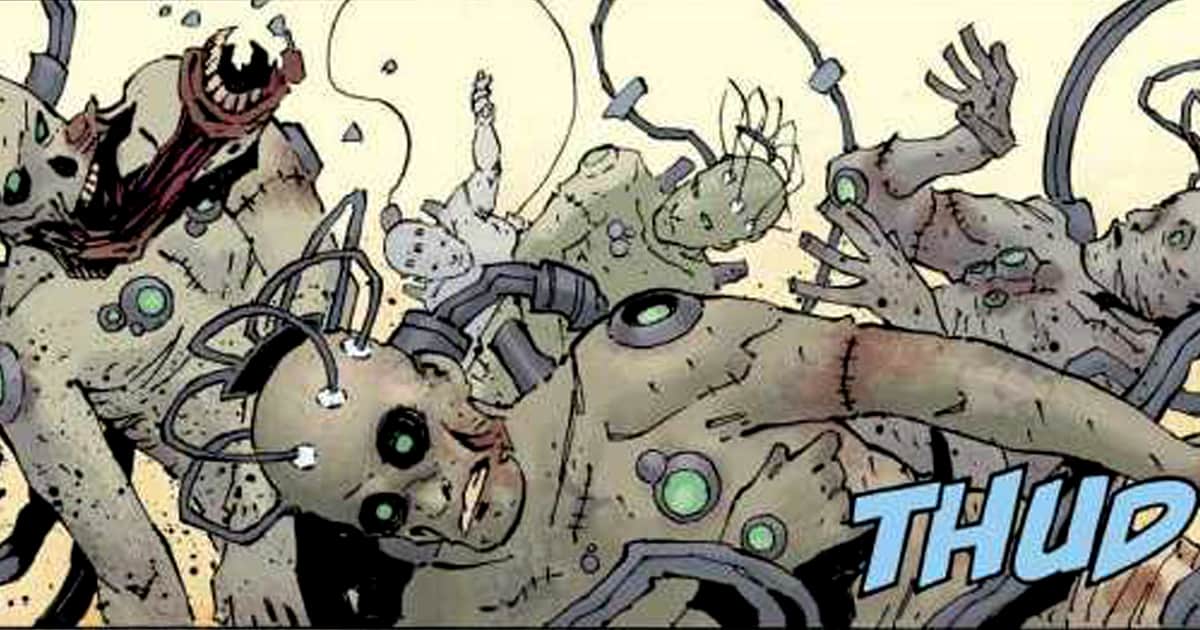 Bruttenholm and Sandhu search for the Master who is helming “Operation Geist”, but first they must confront a nazi scientist and his animated corpses! 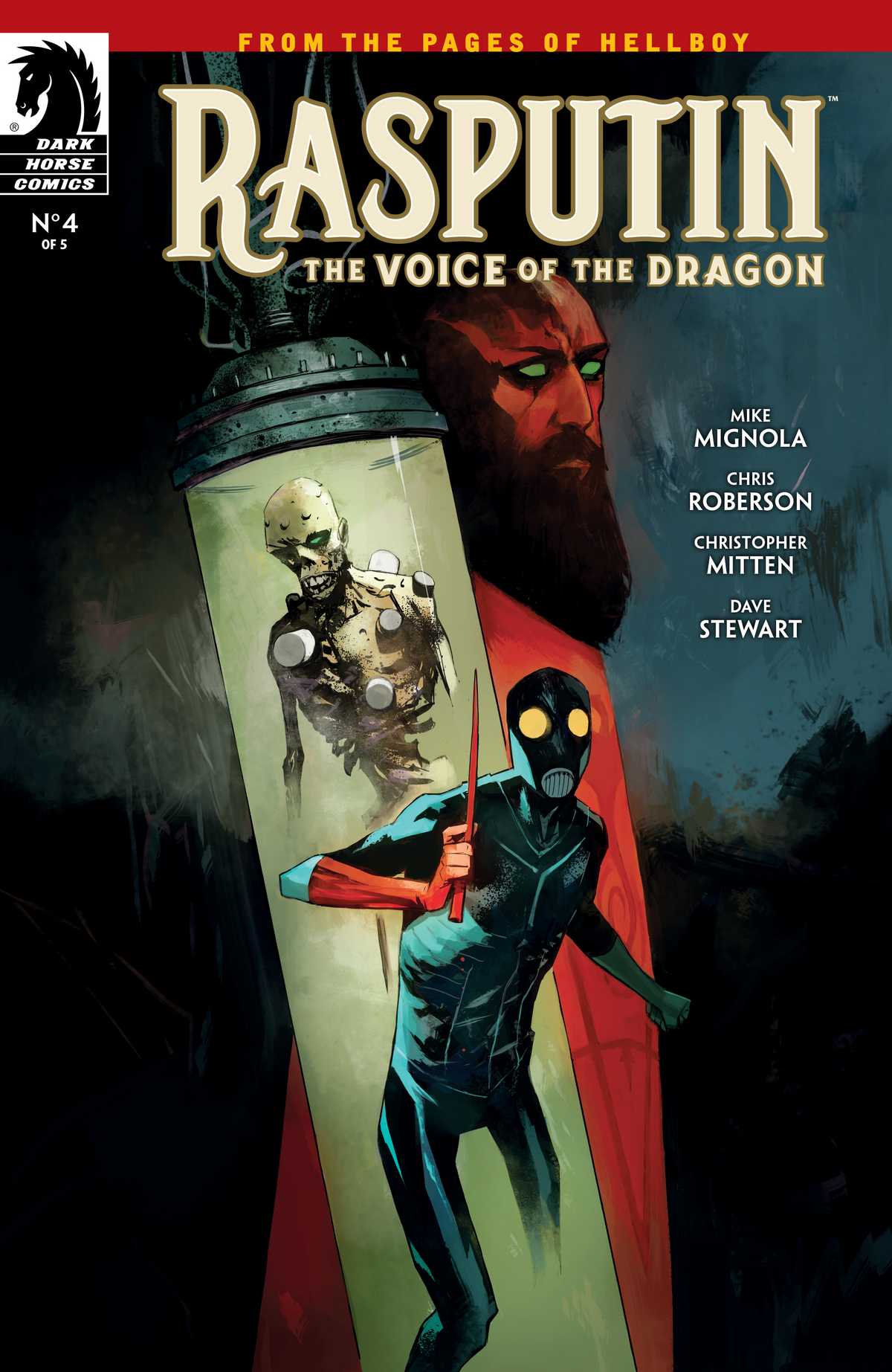 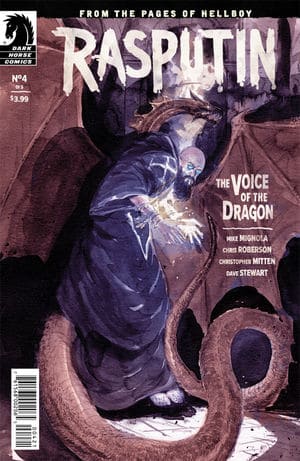 Rasputin has heard the voice of the dragon, but he knows he can’t be the only one. Though he has failed to personally hear anything more of what is to come, he has found a way to learn. Now he works within Hitler’s inner circle and has the resources to pursue his cravings for knowledge and power…

After Trevor Bruttenholm’s discovery of the potential Nazi operation “Geist” led to a confrontation with an animated corpse and an unknown supernatural monster, he is soon recruited by the special operations executive to be a spy in the nazi-held territory. Bruttenholm is parachuted into an open field where he is met by his assistant A.N. Sandhu who has a few magic tricks of his own up his sleeve. The two-track nazi operations to an abandoned hospital where Sandhu reveals to Bruttenholm that he knows the man who reanimated the corpse in the graveyard. He is a Nazi scientist by the name of Kroenen.

The two enter the hospital and soon encounter the morgue, filled with bodies all intricately wired into monstrous machines in the room. With the push of a button, Bruttenholm sends a jolt through the corpses and they all rise out of their beds. Despite their fighting, Bruttenhold and Sandhu become surrounded by the monstrosities when suddenly Kroenen enters the room. He tells them that although the procedure will be painful, they each will make excellent subjects for his experimentation…

Following the lead of a dead spirit attached to a body, a nazi exploration party delves deeper into the catacombs in search of answers for their Master, but their digging unearths a pair of violent automata hounds that tear through their ranks before finally being shot down. Rasputin arrives and pushes the exploration party further, urging them to listen to their guide and asking for the whereabouts of their scientist, Kroenen. A soldier informs Rasputin that his is working on one of his personal projects but will be joining them shortly. 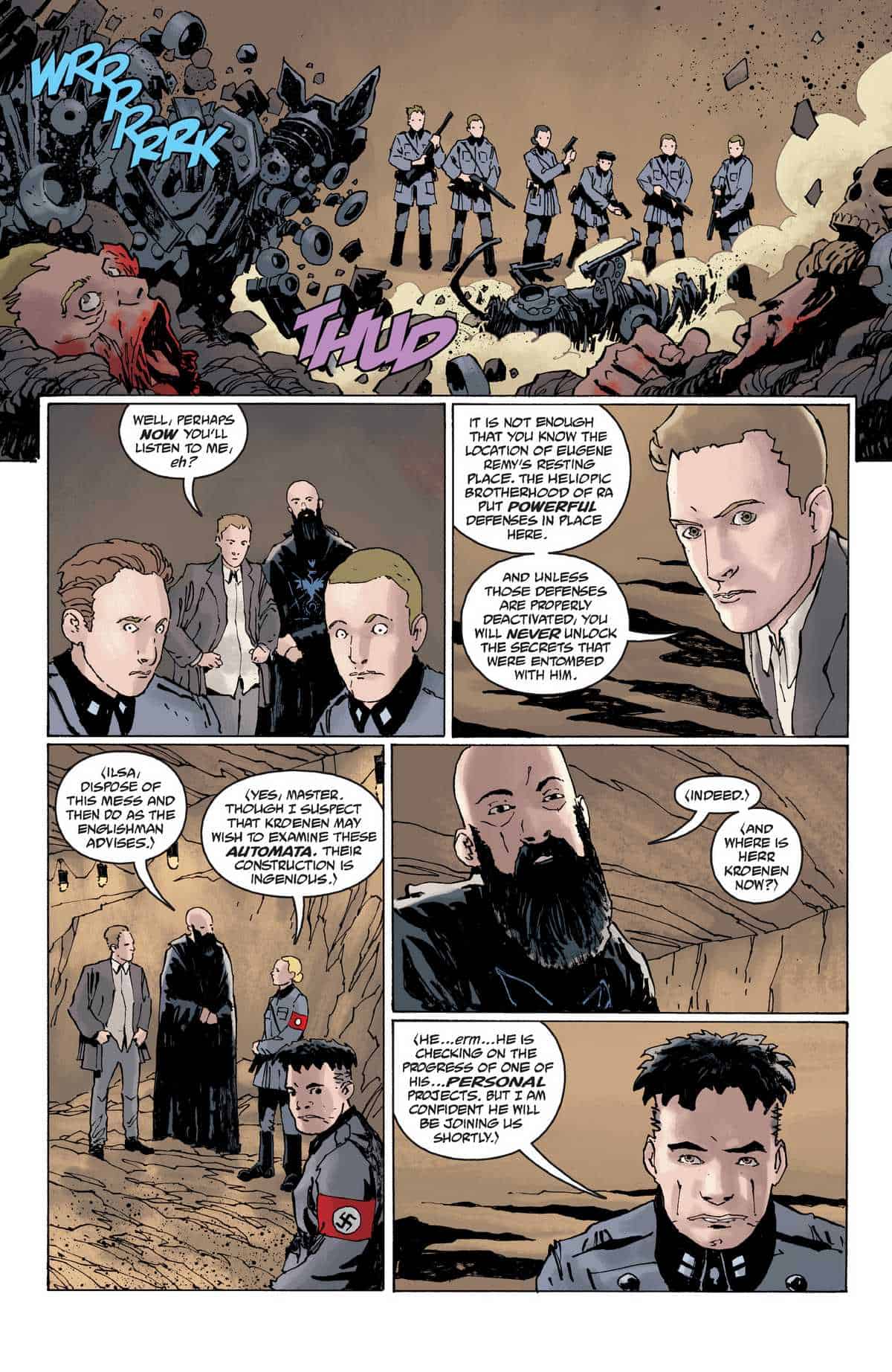 Back at the abandoned hospital, Kroenen prepares for surgery surrounded by dozens of his own animated corpses. He has Sandhu strapped to an operating table in front of him, and Bruttenhold held captive and forced to watch. Kroenen explains that while his Master may not understand the value of his work right now, he is creating the soldiers of the future. As Kroenen drags his scalpel across Sandhu’s forehead, Sandhu mutters a spell that casts a blinding light out and gives just the distraction the two needed. Sandhu grabs two guns and shoots Kroenen before tossing one to Bruttenholm. Immediately Bruttenholm opens fire on the power source for the corpses, dropping them all in their place. After explaining how he had the situation somewhat under control, Sandhu and Bruttenholm leave the hospital in search of the Master in the catacombs. Just after they leave, however, Kroenen lifts his arm and grunts… 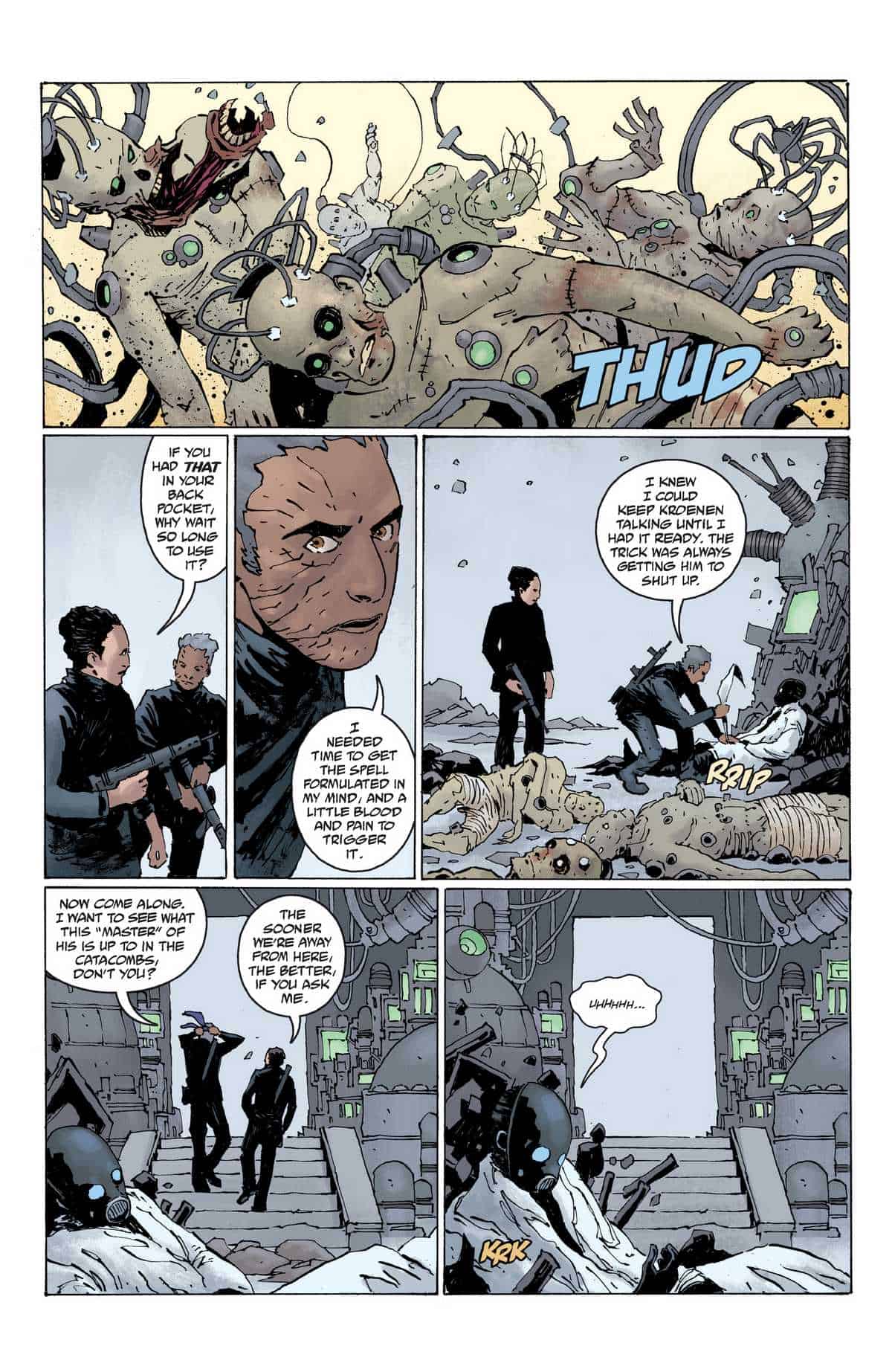 Deep inside the catacombs, Bruttenholm and Sandhu scour the tunnels until they encounter a trio of guards protecting a man-made entryway deeper into the catacombs. In need of a distraction, Bruttenholm pretends to be lost, giving Sandhu just enough time to make quick work of the guards. Deciding to see just what the Nazis are up to, they follow the entrance down another tunnel that leads the two right to a lost tomb that is now Nazi-occupied.

As Bruttenhold gets into position to stop the Nazi machinery at work above the tomb, Sandhu prepares to confront the individual performing an incantation at the alter when Rasputin himself appears behind him. With the summoning complete, a horrific laughing entity surrounded by more automata hounds appears from the tomb…

As the story nears its finale, the latest issue of Rasputin: Voice of the Dragon progresses quickly towards what seems to be a monumental battle of both might and wit. Drawing on ancient mythology and folklore, the series continues to easily maintain its coherence with the Hellboy Universe, all while expanding on one of the most notable characters in the franchise aside from Hellboy.

Curiously, Bruttenholm commands more of the story than the villain which the series is named after, but this does nothing to diminish the development of Rasputin nor his overwhelmingly ominous impact. Readers are shown a side of Bruttenholm that displays just why he is the one who will go on to found the B.P.R.D, as he investigates and fights his way to stopping paranormal nazi operations. Although the narrative for this issue begins the culmination into the climactic final issue, it doesn’t fall prey to the usual “calm before the storm” moment. The momentum only builds throughout the story, and eventually leaves readers with a terrifying cliffhanger sure to have them coming back to find out how it ends. 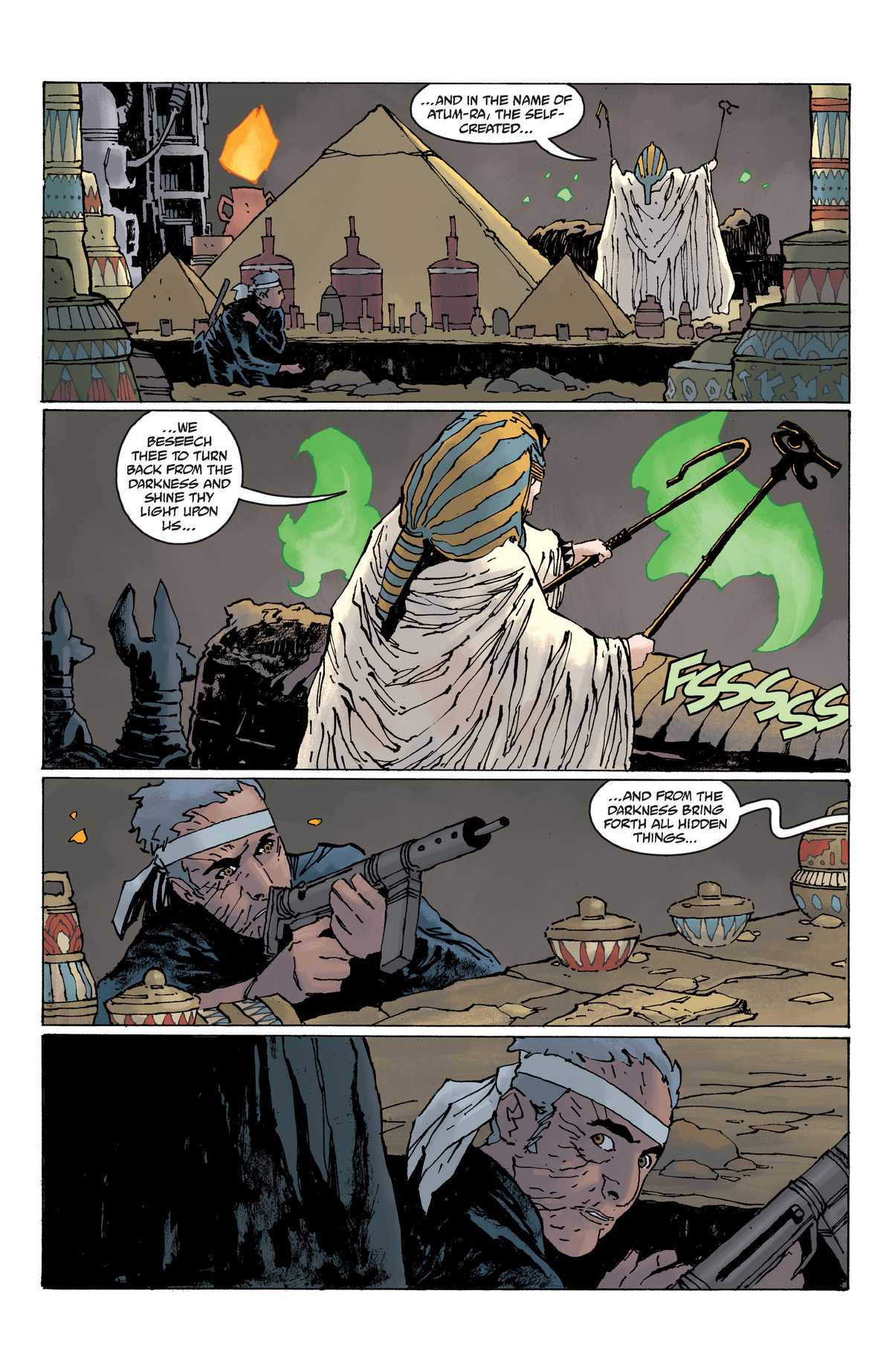 The artwork is again distinctly within the Hellboy Universe, although the use of colors separates the usual blacks found in the stories. Bruttenholm is young and inexperienced, but still eager, and the artistic direction compliments this mood greatly. It beautifully depicts not only one of Rasputin’s early attempts at bringing forth dark power from the unknown, but also the courage necessary to stop someone so dangerous.

So far, elaborating on some of the most notorious Hellboy Universe villains has proven not to be just incredibly successful, but relevant to the foundation of the stories we have all come to love as fans. The latest issue of Rasputin: Voice of the Dragon continues to strike the perfect balance of telling a valuable and entertaining story that stands on its own while still remaining relevant to the universe in which it is set, creating a delightful reading experience for veterans and newcomers alike!

Final Thoughts: Rasputin: Voice of the Dragon #4 continues a thrilling tale of paranormal exploration fraught with evil intentions confronted by heroic acts of courage. As readers discover more about the early days of both Trevor Bruttenholm and Rasputin, the series is poised to culminate in a shocking confrontation, but not before leaving readers with a terrifying cliffhanger!