The Despicable Deadpool #295 is a compelling blend of humor, violence, and emotion that manages to deliver one of the best reading experiences this series has to offer! 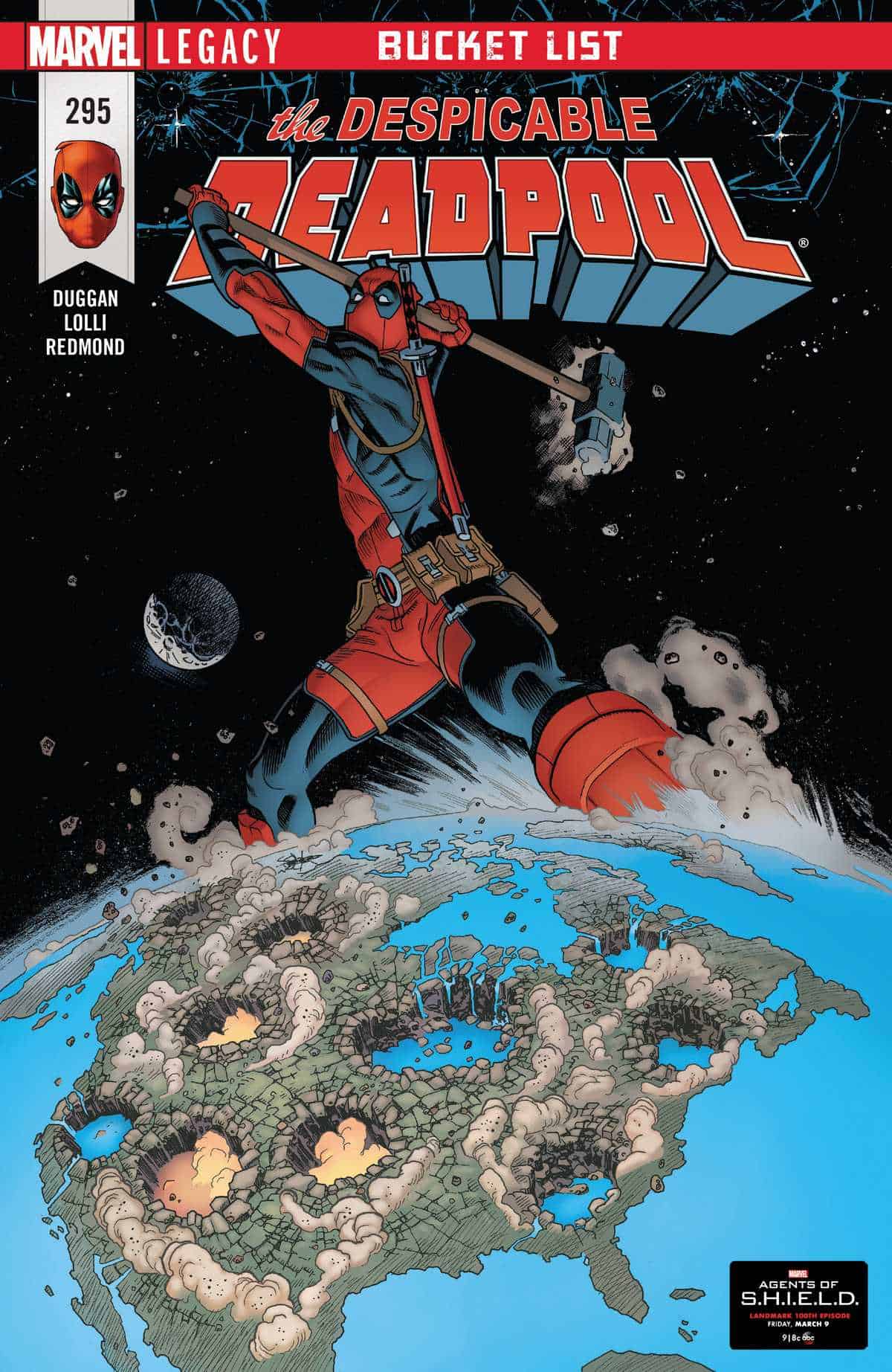 Still forced to kill by Stryfe, Deadpool has removed three names off of his hit list. The most recent occurred through a whimsical battle with none of than Madcap himself. After multiple fights that ended with no clear winner, Deadpool’s plan comes to light as The Collector arrives to take Madcap away. This delights Madcap, however, who has come to pity Deadpool after the events that have happened to him recently. The Collector and Madcap depart, leaving Deadpool alone to discover that his next target for Stryfe is Kid Apocalypse!

Kid Apocalypse sprints down the sidewalk in the pouring rain frantically, until he stumbles into a passing couple and falls to the ground. They are concerned, but he warns them to stay away and that Deadpool is coming to kill him. Before they can respond though, Deadpool knocks them both unconscious and aims his handgun at Kid Apocalypse’s face. Deadpool tells him that he hit him with a drug that suppresses his powers and that this wasn’t his fault. Somewhere far away, Stryfe watches as Kid Apocalypse’s name drops off his mutant tracker. 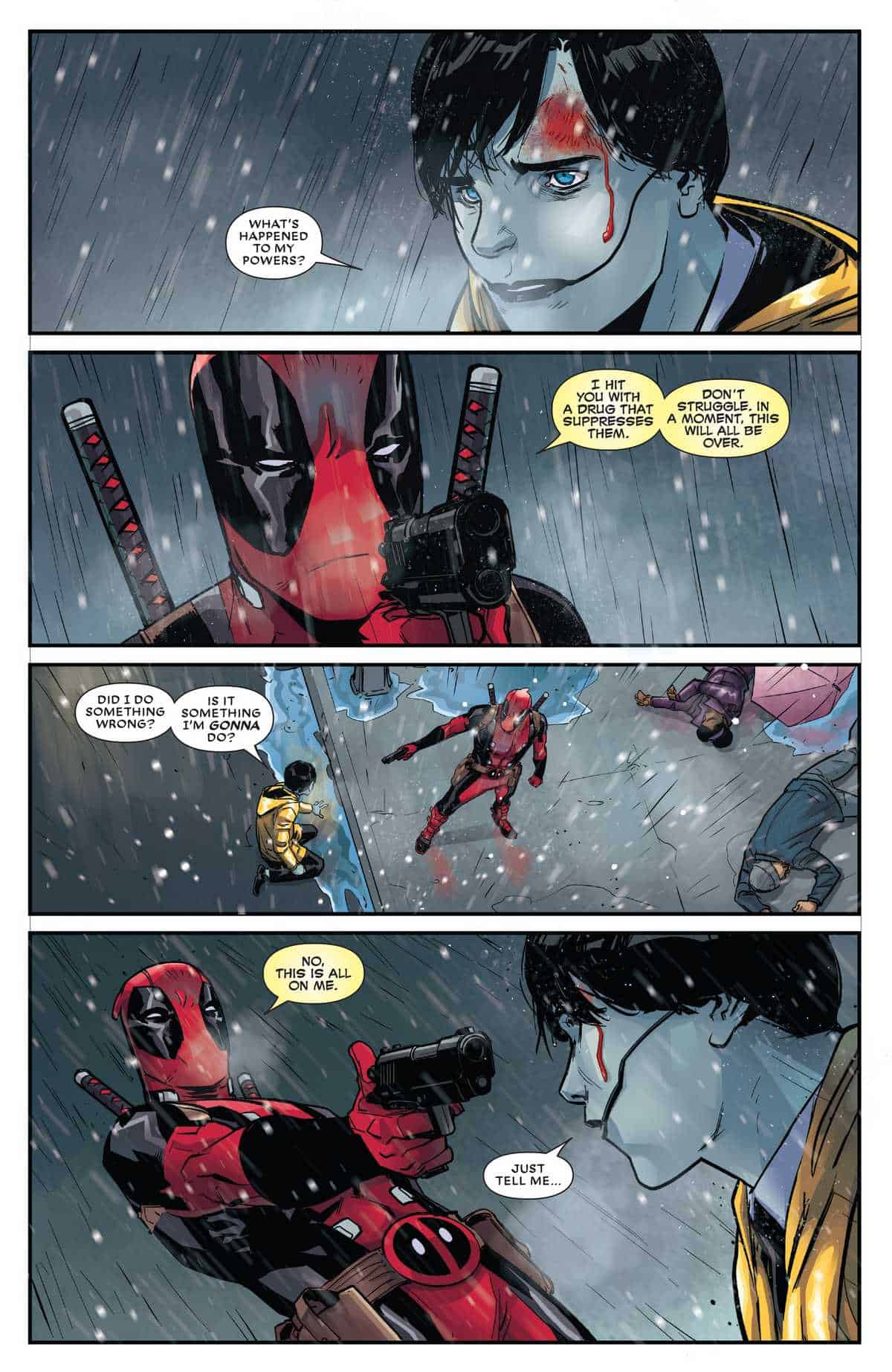 Teleporting into Stryfe’s chambers, Deadpool bluntly asks for the last name on his hit list and immediately leaves when he hears it. However, first, he teleports back to where Kid Apocalypse was, and after knocking the same couple unconscious one more time proceeds to wake Kid Apocalypse up. Now completely powerless, he tells Deadpool that he thought he was going to kill him. Deadpool replies that if he really thought he was going to kill him, he would have called the X-Men, but Kid Apocalypse already had. Just at that moment, Colossus bursts through the wall, throwing Deadpool across the room.

Before Deadpool can recover, Kitty Pryde enters the fight, phasing a baseball bat into Deadpool’s chest then forcing him to become one with the glass window he attempted to escape through. After falling to the ground and amidst the shattering glass, Deadpool has an emotional moment and tells them all of what Stryfe will do to Ellie if he doesn’t complete the hit list. The X-Men tell him that if he was in trouble he should have come to his friends, but Deadpool believes he just can’t afford to have any. He throws a grenade at them and escapes beneath the streets into the sewer. 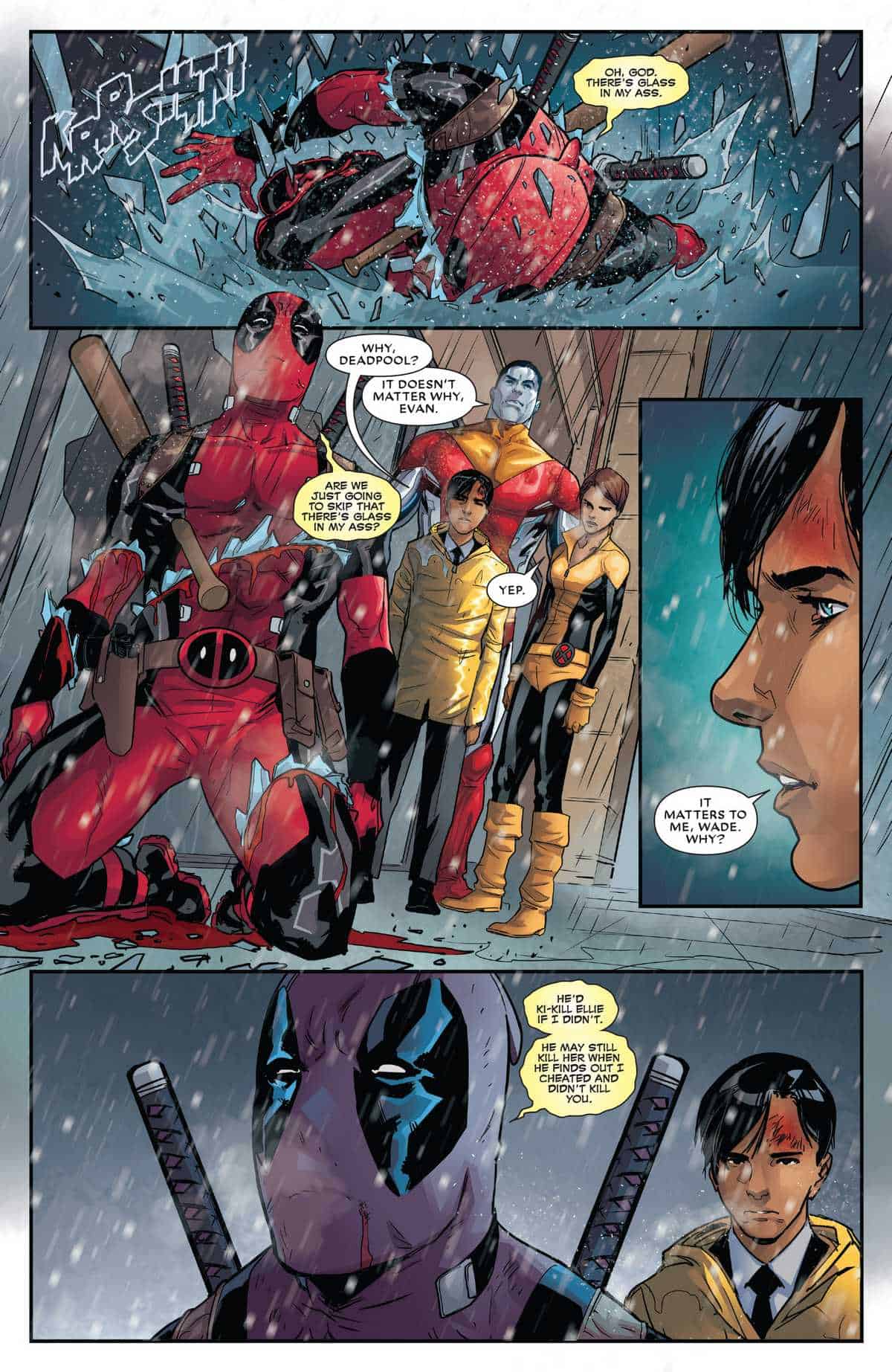 Shortly after, he arrives at his next targets house. A civilian named Marietta Nelson, who is sleeping soundly in her bed when she suddenly wakes up, asking who is there. Deadpool is sitting in the corner in a chair, and he introduces himself, then offers an apology. She knows who he is, but not why he is there. Deadpool opens up, explaining exactly what has to happen. That she must die for him to save his daughter, Ellie. He says nobody deserves him, but he just happens to people and he is sorry. Crying in her bed, she thinks that dying to save a young girl may not be the worst ending, and asks Deadpool if it will hurt. He responds simply, no. He had already done it, then gently, he places her hand beside her now dead body and leans over her, distraught from his actions. 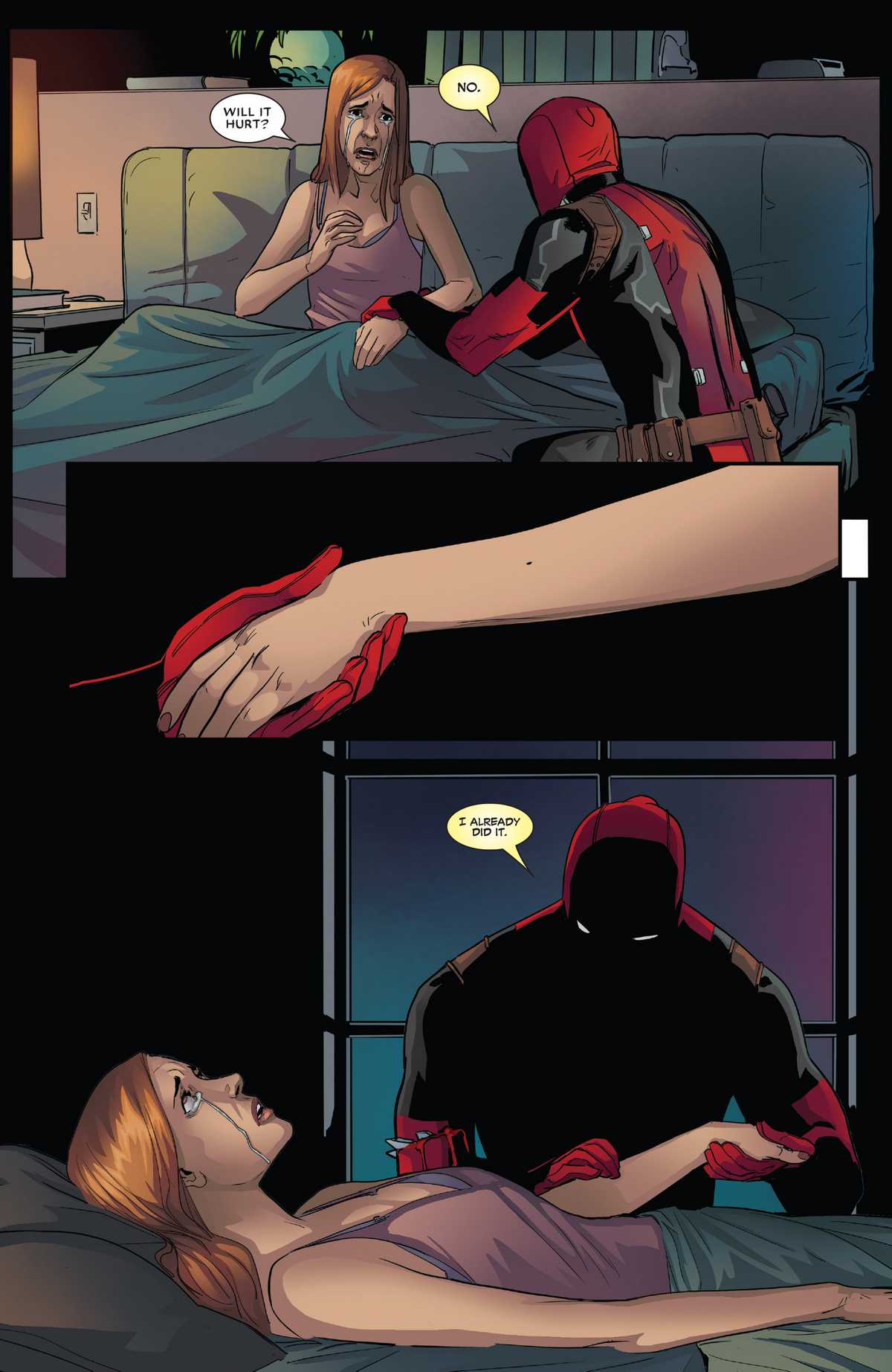 Soon after, Deadpool leaves the building, but he knows who is waiting outside. He knows he is too late, for him and the woman inside. Cap’s shield puts Deadpool down on his knees and he tells Deadpool that it’s time for him to come in. Deadpool refuses, saying he has one more item on his bucket list, but Cap grabs his shield and tells him to prepare to have some good old-fashioned sense knocked into him…

What Just Happened?
Following a whimsical issue between Deadpool and Macap, the latest issue of the Despicable Deadpool truly surprises in its depth of character and overall quality of storytelling. The issue finds a strong sense of identity with classic Deadpool tropes like breaking the fourth wall and intimidating violence mixed with unique humor, but truly shines in the moments of genuine emotion from none other than Deadpool himself. Readers find Deadpool in a state of mind where Stryfe’s hit list has started to take an emotional toll that is becoming more evident in his work. After sparing Kid Apocalypse, he is unfortunate to have no other way than to actually kill the final woman, Marietta Nelson. 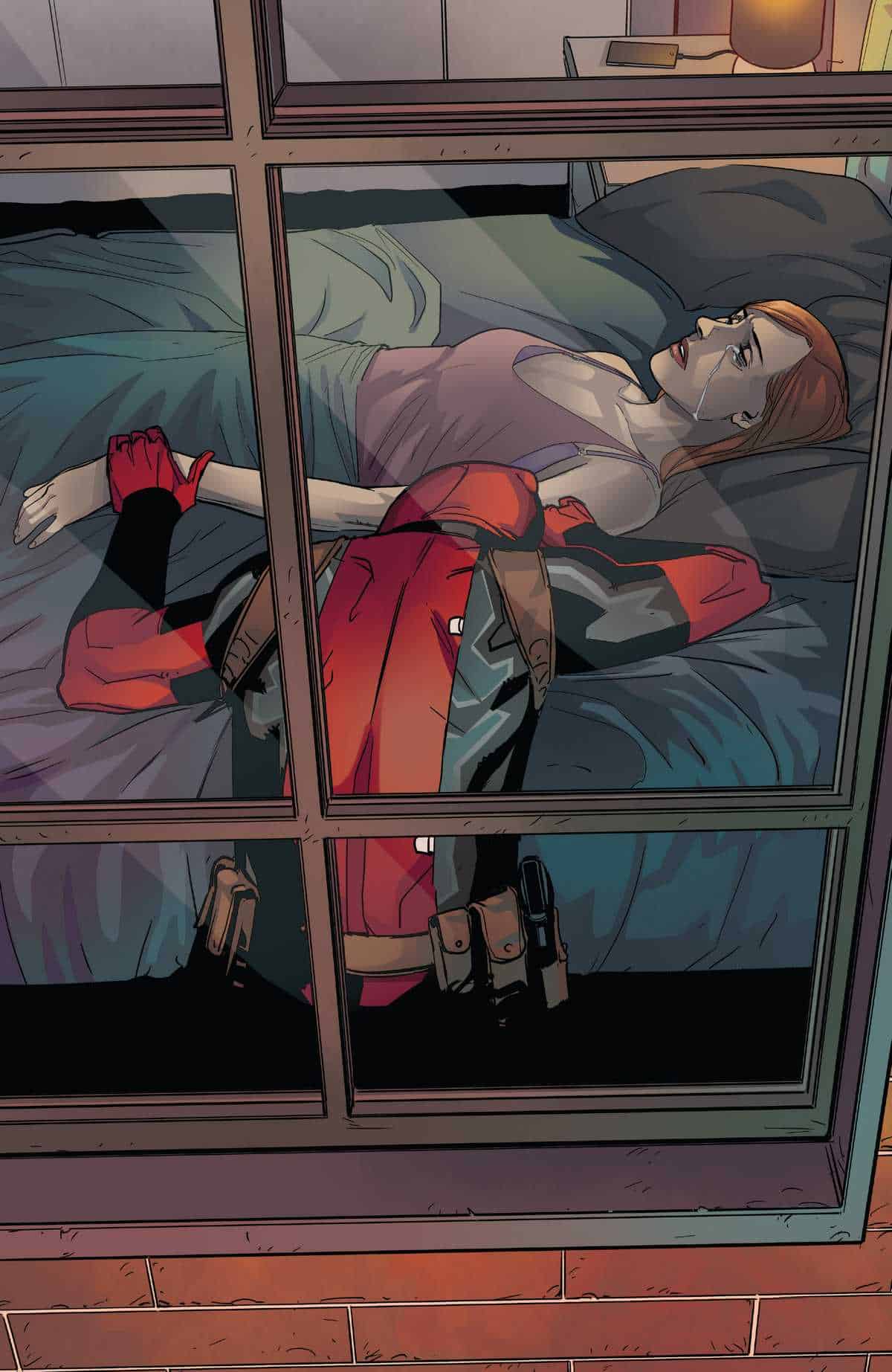 This moment between a seemingly normal citizen and the infamous Merc’ with a Mouth delves into the heart of what makes Deadpool such a great character as readers can feel the pain his actions are causing him. Though it is all done to save his loved ones, Deadpool refers to Marietta multiple times as someone who could be just like Ellie, but she was unfortunate enough to become sucked into Deadpool’s life. This is a recurring theme throughout the issue as Deadpool struggles with the ongoing consequences that his relationships have given rise to.

The artist direction is superb in the latest issue of the Despicable Deadpool. Where the previous installment was more whimsical and quite colorful. This issue is a return to form for the character, with beautiful action sequences and intimidating moments that are emphasized with a perfect color palette.

Overall, the reading experience was actually surprising. As previous issues seemed to miss the mark on providing all of the many elements of what makes Deadpool so great, this one captures nearly all of them in a powerful way. From the hilarious introduction of Colossus to the unforgettable moment between Deadpool and an innocent civilian caught up in the dangers of his own life, the latest issue of the Despicable Deadpool is a great reminder as to why I fell in love with the character so long ago.

Final Thoughts: The Despicable Deadpool #295 is full of classic Deadpool quips and violent action, but also heartfelt moments that drive the narrative forward in a way that encourages readers to actually care about what will happen to Deadpool next. Whether you have followed the journey leading up to this moment, or just recently picked up the story, this is a Deadpool comic that any fan should read. Simple as that.