REVIEW: The Despicable Deadpool #294 (A Bit Outta the Loop) 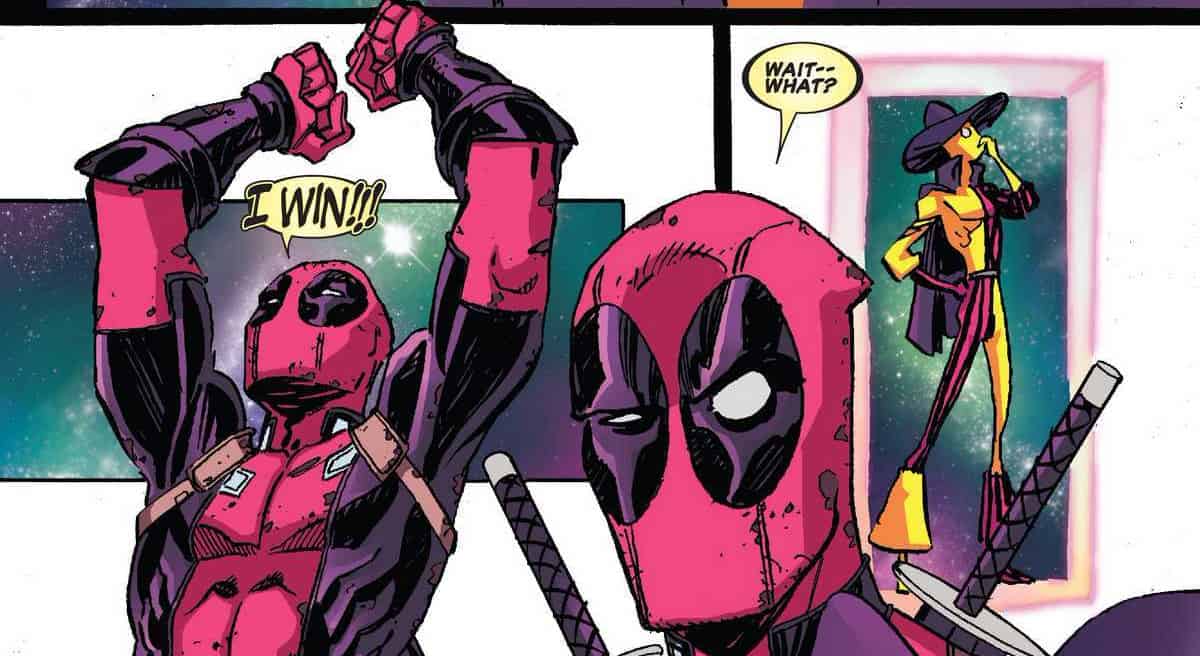 Deadpool and Madcap face off in a way only they can, but a friend of Deadpool’s from space will surely even the playing field! 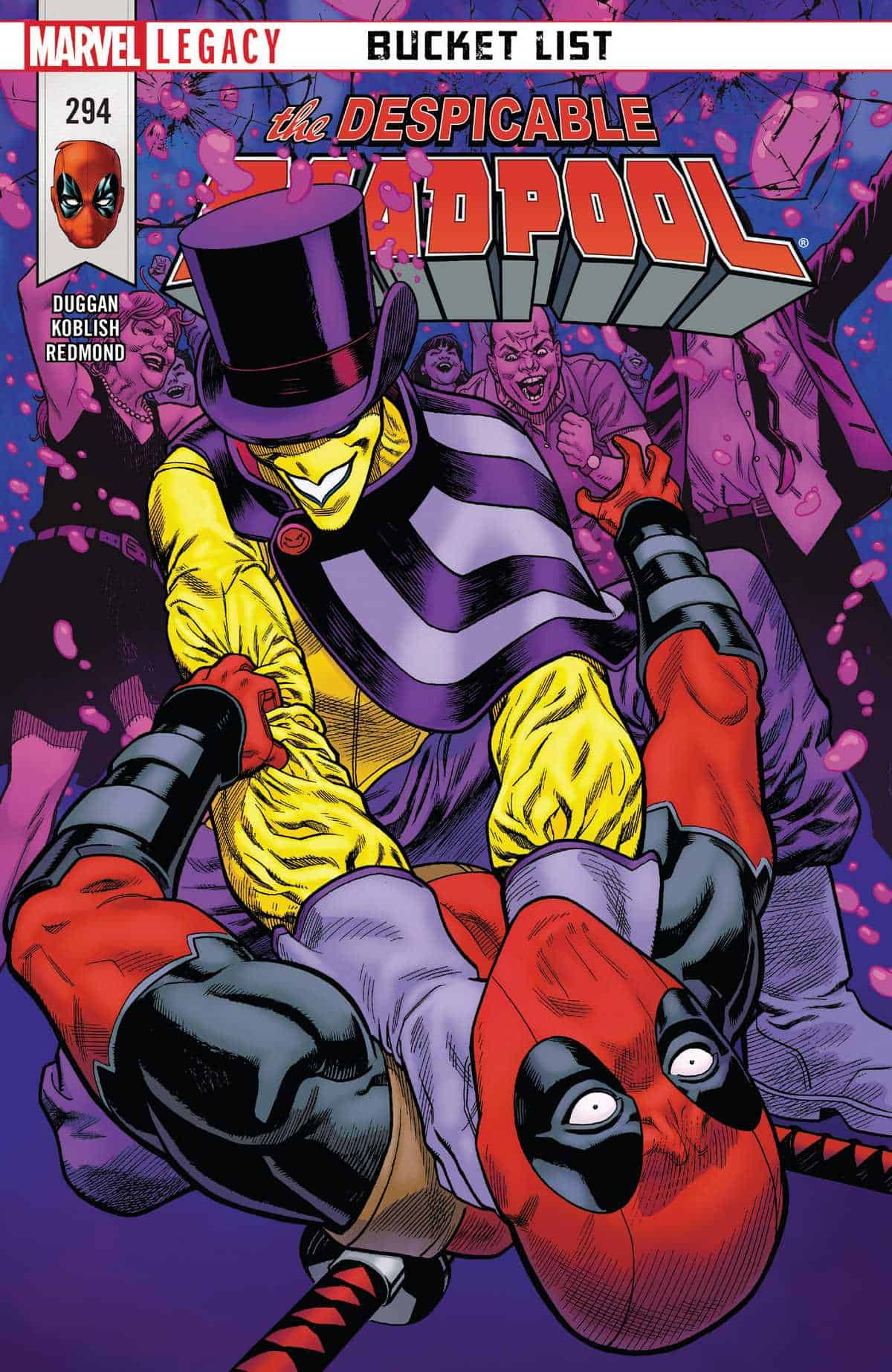 In his quest to repay Stryfe for saving his loved ones from Madcap, Deadpool has to check two people off of the evil clone’s hitlist, leaving just two to go. After blowing off some steam by giving Stevil Rogers a visit, Deadpool runs into none other than X-Men member Rogue looking to bring him for his crimes! The two fought out their differences, only to end with Deadpool blinding Rogue and making his escape just before the real Captain America arrives to clean up.

Madcap is back with a new song and dance! As a crowd follows him, even joining along in the performance, Madcap explains his plans to kill Deadpool until they are cut short by arriving at a demolished building. With Deadpool nowhere to be found, Madcap brushes up on recent Marvel events by reading the “Secrets of Secret Empire Explained” book, only to discover just how much Deadpool’s life has already been destroyed. This is when Deadpool finally arrives. 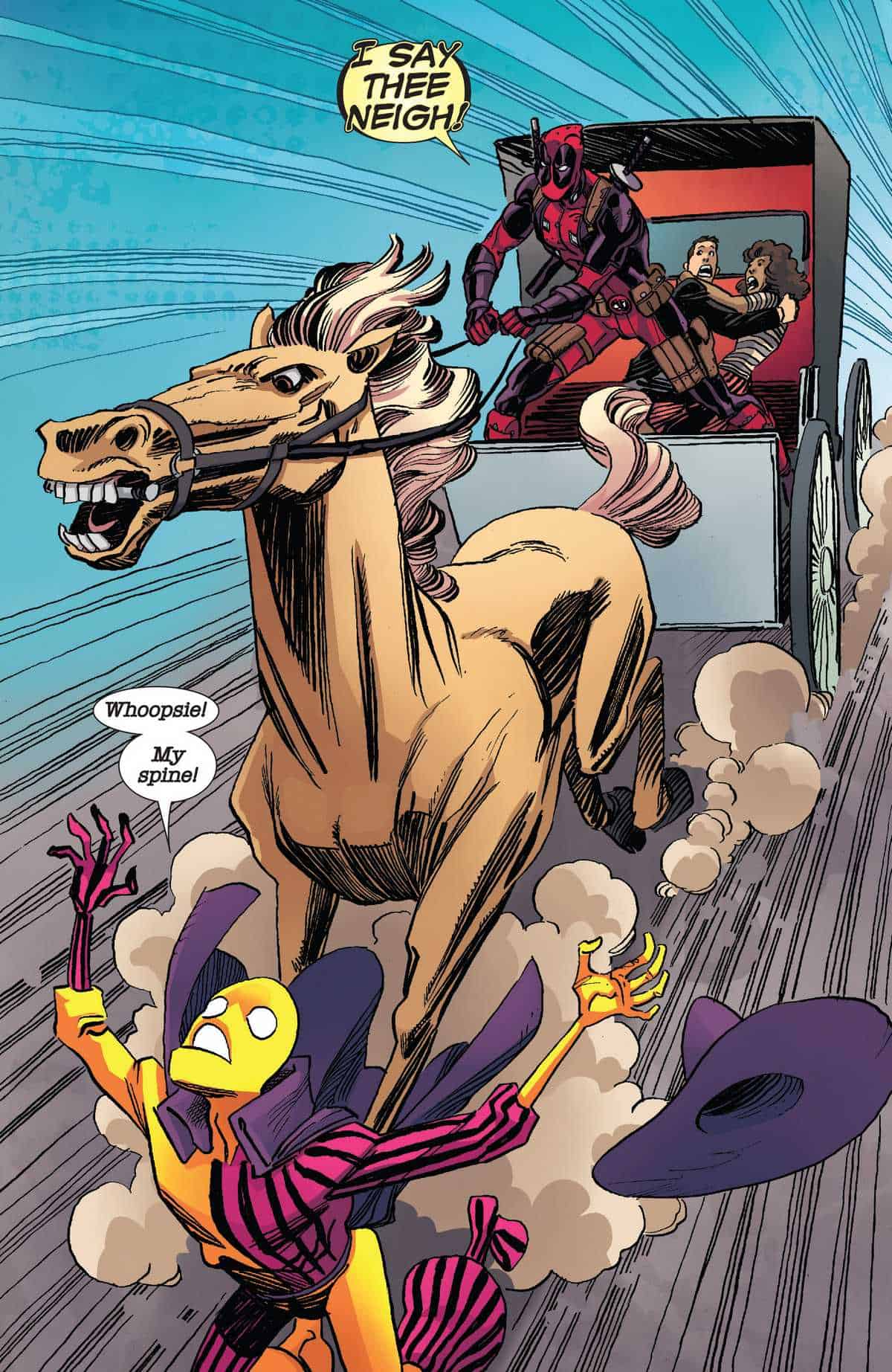 The two clash in an open battle and just as Deadpool slices off Madcap’s arm, he explains that this time he came prepared. He went to space looking for a weapon that could kill Madcap, but it turns out, Deadpool found something much better than a weapon. Brushing off the threat, Madcap reveals his knowledge of Deadpool’s recent events with Rogue. The two continue to fight as Madcap rambles on and eventually asks what Deadpool’s big plan is.

The Collector suddenly appears, accompanied by two vicious hounds and a woman named Rhiannon. He asks her to test the indestructible clown specimen and she immediately slices off Madcap’s head. He survives this and being burned alive, impressing The Collector, who imprisons him and thanks Deadpool for the alert. Deadpool celebrates by rubbing it in Madcap’s face, telling him he will truly go mad in the private space zoo of The Collector’s. 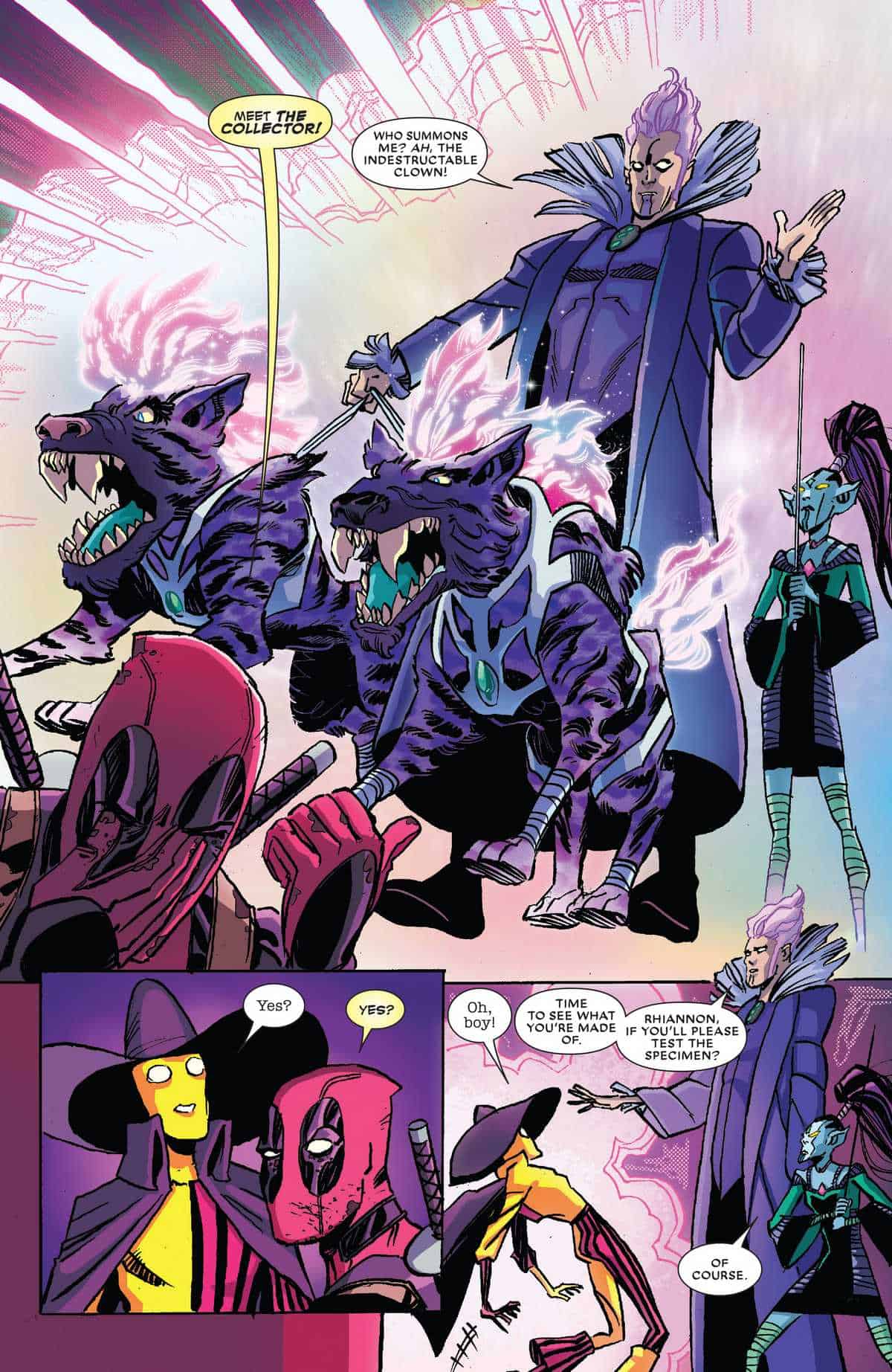 However, much to Deadpool’s dismay, this unknown venture only excites Madcap. Within The Collector’s cell, Madcap explains how Deadpool’s life had gotten much worse than he could ever have imagined and how he actually feels bad for him. He thanks Deadpool for the new future before The Collector teleports them away, leaving Deadpool angry and alone in the streets when a nearby phone booth begins ringing.

On the other end is Stryfe, who tells Deadpool to look up for his next target. Taped to the top of the phone booth is a photo of Deadpool’s last target on the hit list, Kid Apocalypse…

Madcap returns to face Deadpool in an issue that really can only be described as particularly unique. The combination of Madcap’s purposelessness with Deadpool’s absurd antics make for a curiously odd reading experience. However, the underlying tone of Deadpool’s actions provide much needed emotional weight to an otherwise whimsical story.

Although the latest issue of Despicable Deadpool suffers from faults associated with a few others in this series, mainly the plot’s focus on other characters, it still provides quality Deadpool moments that make it well worth the read. Madcap receives the majority of the spotlight, even opening the book with a full song and dance. While interesting, this focus minimalizes Deadpool’s role to a simple plot device in order to move Madcap’s narrative forward. 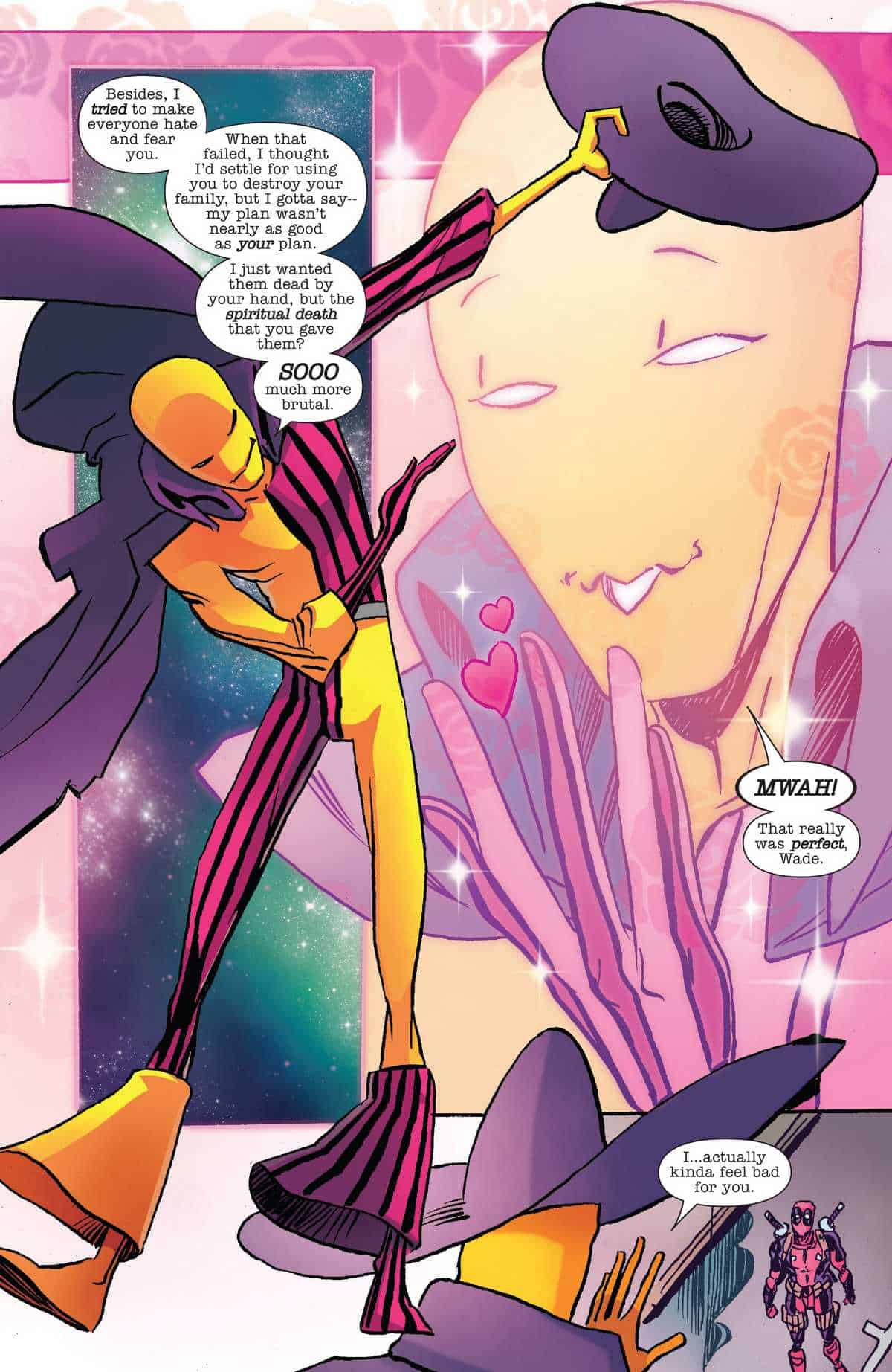 The artwork has been consistently top-notch, and this issue continues that trend with a unique direction that establishes the fanciful yet grave tone perfectly. This along with a few very funny Deadpool moments and a truly awesome appearance by The Collector makes this a book that will undoubtedly entertain fans of the series but ultimately feels like a filler issue despite its overall narrative significance.

Final Thoughts: The Despicable Deadpool #294 is a whimsical reading experience, but unfortunately lacks in substance where there could have been so much to explore. Hopefully, the spotlight will return to Deadpool after his hit list is completed!