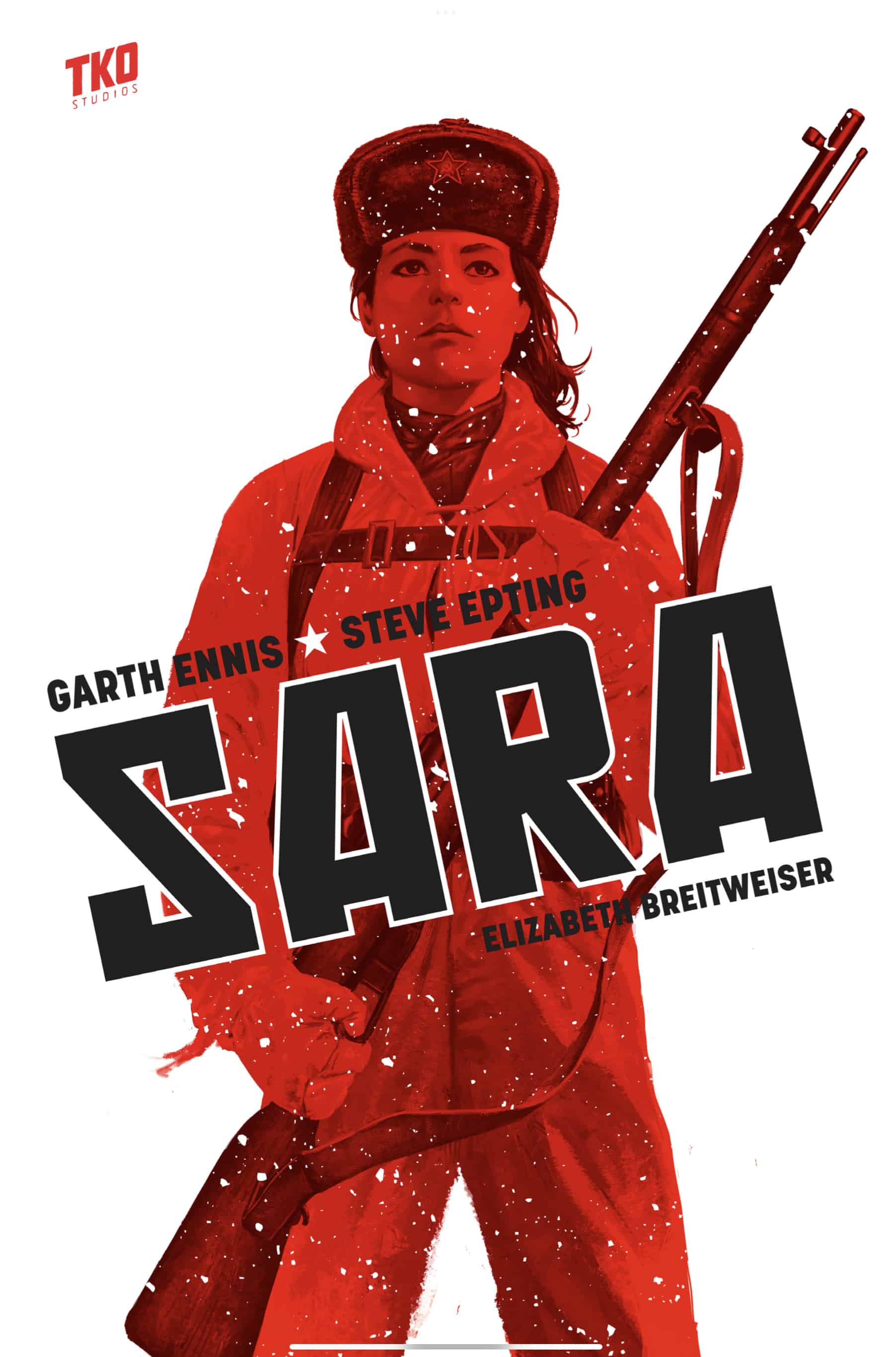 SARA is a gripping war story following a team of female Russian snipers as they beat back the Nazi invaders during a brutal winter campaign on the WWII Eastern Front.

In the cold winter of 1942, Soviet sniper Sara and her comrades fight against Nazi invaders. But as the fighting intensifies, can their squad survive? Inspired by true events.

In both fiction and literature, World War II narratives are generally clear-cut. The Allies are good, the Axis are bad and sometimes there’s some complexity to the action of soldiers. On the other hand, the Vietnam War is shaded in tones of gray, caught in a more morally complex situation. Sara, a graphic novel from the first wave of comics from TKO Presents, bucks against the notion of a morally simple war story. The series is written by Garth Ennis, with art by Steve Epting and is rounded out by colorist Elizabeth Breitweiser and letterer Rob Steen.

Sara follows a group of eight female soviet snipers caught in a dangerous game of cat and mouse with a German assassin during the wintery Siege of Leningrad. The titular protagonist of the comic, Sara, is by far the best sniper in the regiment, but also the most reserved. This status of being the best places Sara in the crosshairs of an enemy German sniper who puts the Soviets to a standstill, and the rest of the book is Sara’s attempts to kill the enemy before he can kill her.

The first thing that elevates this graphic novel from the traditional World War II story is the writer’s choice to focus on the Soviets, rather than the Western Allies. The easy choice to portray a hero in the context of the war is by making them British or American to show how democracy and freedom are the primary driving forces of “good”. Ennis subverts this by not only choosing the Soviets, who at the time were still engaged in a Communist regime that placed the state over the individual but by forcing the reader to sympathize with a sniper, one of the more detached and active killers in a war.

It’s easier for an audience to justify a soldier’s act of killing in the heat of battle, where chaos reigns, but to empathize with a sniper, one who kills with a clear goal in mind, is an entirely different task. This choice of the premise already brings a layer of moral uneasiness to the book that takes a step away from the cookie-cutter tropes of World War II, and into a world of messy morals.

The book is told from Sara’s point of view, using narration to provide exposition and context for why the women are fighting in the war, and Sara’s particular frame of mind makes her an outsider. While the rest of the regiment sees their fighting as the best way to help the motherland, Sara’s grown disillusioned with the idea and morphed herself into a machine killing because her family was eradicated by the Germans.

Ennis posits that the snipers are akin to Templars, fighting for a higher power, while Sara has found individualism by becoming a Blood Knight, only concerned with dead Germans. The use of thought bubbles for the bulk of the text, and a focus on Sara’s individualistic streak reveal a connection between the heroes an audience wants to follow and the reality that they might not like what they ultimately see.

If the foundation of subversion is Ennis’ tight, but the dichromatic script, then it is Epting’s art along with Breitweiser’s colors that elevate the book to an even higher level. The book is masterfully drawn, with a clear focus on the beauty of the natural world, contrasting the pure carnage that the soldiers inflict on one another.

Breitweiser uses the primarily white backdrop of Russian winter to contrast the bright colors of rosy cheeks and warm, flowing blood. Color is on display in the book, also bucking the idea that a World War II story has to take place in a drab, dreary world. The use of color is a flourish to the idea of subversion, pairing beautiful and vivid colors to a morally gray world.

Battles are rendered as quick, bright splashes of blood, and never appear drawn out. In a world of snipers, speed is an efficient tool that Epting uses to the book’s advantage. Achieving a goal, and defeating the enemy is clinical, a sequence of crosshairs and single gunshots. However, Epting isn’t only limited to quieter combat. In the book’s third chapter, the Soviets are attacked by the Germans in a snowy clearing, and Epting has the chance to express what a more traditional war image looks like.

The blocking of elements, tanks blasting, and roaring Gatling guns prove the artist hasn’t lost his touch with the highly kinetic action sequences of a standard comic. Sara states in a narration that all battles have a rhythm to them, and Epting can masterfully illustrate the various types. Sometimes a battle is little more than quick spurts of gunfire, with combatants trying to outsmart each other, while others are stretches of primal rushes and attacks.

Whether a veteran of reading comic books or a new recruit, Sara provides a fascinating read into what it means to tell a story set in World War II. The book’s subtle yet powerful writing, stylized and kinetic art and lushly complementing colors all function as ways to subvert the tropes of the genre and provide a wholly unique reading experience.