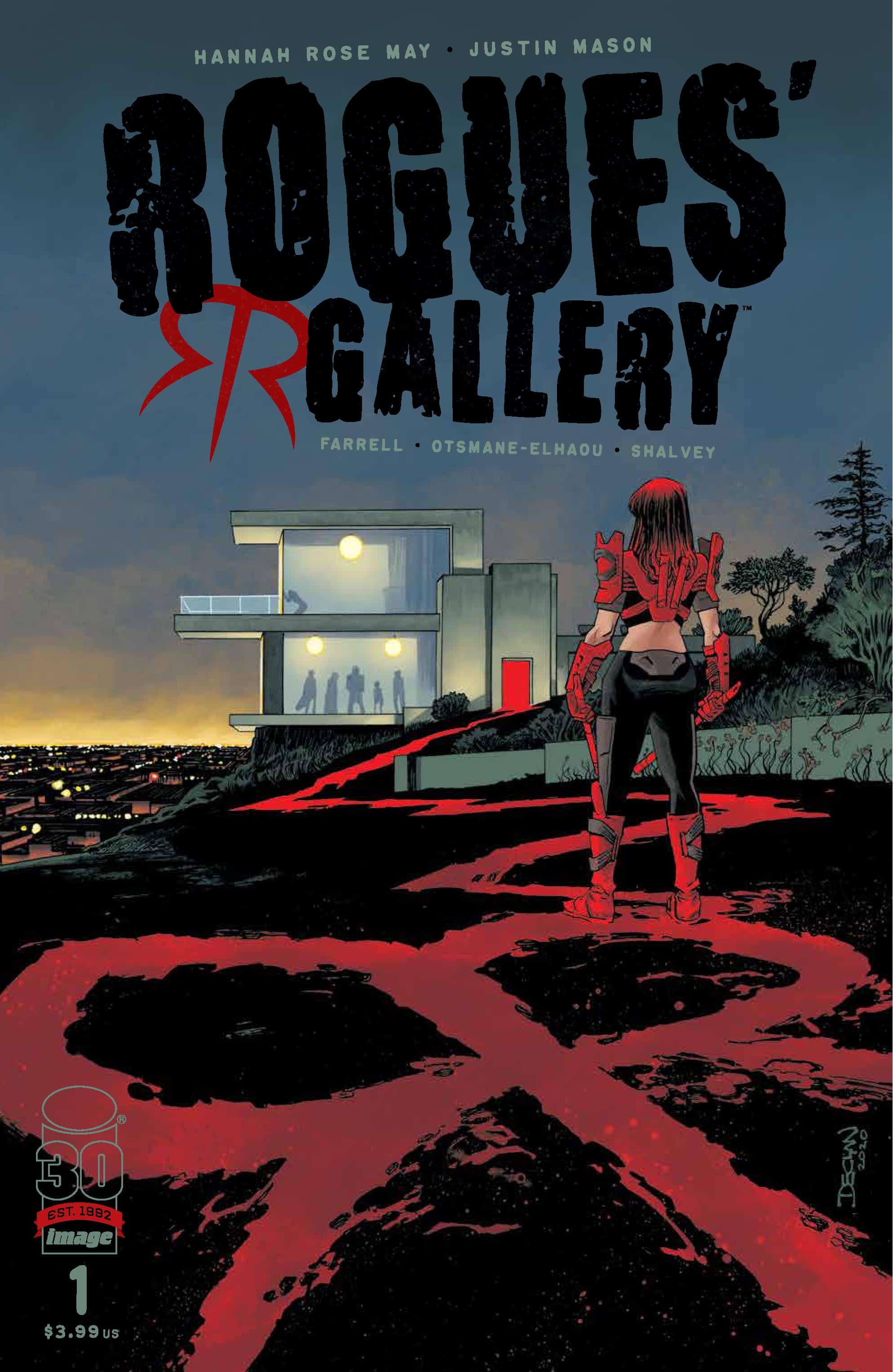 Writer HANNAH ROSE MAY makes her comic debut with rising-star artist JUSTIN MASON for an all-new series with DECLAN SHALVEY.

The Purge meets Scream in a home invasion thriller that follows disenfranchised TV superhero actress Maisie Wade as she is terrorized by an unhinged group of intruders cosplaying her day job’s archvillains. If Maisie is going to survive the night, she’ll need to be the hero she has come to despise.

Toxic fandom and entitled fans are not new concepts, but in the digital age, it feels like the world is playing catch up to just how pervasive they can be. Rolling Stone recently published a chilling examination of the Snyder Cut movement, one of the more well-known instances of these toxic fans, to the point it was a punchline on FX’s The Bear. The story is a damning account of what fans – being riled up in an echo chamber filled with bots – can arrive at in an attempt to ‘support’ (or demand) creators and their art. The underlying principle is that fans have a true connection to the source material, in this case, comics, and feel ownership that entitles them to dictate where adaptations go. The same line of thought extends far beyond comic books and their adapted works, ranging from media juggernauts like Star Wars to smaller endeavors like the McElroy Brothers’ long-standing podcast My Brother, My Brother and Me. It’s fitting that the discussions of toxic fandom and entitlement would ignite this week, as Image launches a new series, Rogues’ Gallery, that uses those concepts as its narrative backdrop.

Rogues’ Gallery #1 is the comic writing debut of Hannah Rose May, joined by Justin Mason on art duties, along with Triona Farrell on colors and Hassan Otsmane-Elhaou. Declan Shalvey, Image veteran and writer/artist double threat is credited with assisting in the story and is worth mentioning as well as the book’s editor, Heather Antos, who has her history with toxic fandom in seemingly flat circle Venn diagrams of comic and Star Wars fans. The reason that piece of information feels important is largely based on the subject material of the book, as every level of production for this book has an infusion of personal experience. At all levels, comic creators, especially those working on big two or licensed books, have to deal with harassment and critical eye from fans that have attached themselves to these characters, many times from a young age. But there’s an extra layer of that toxicity that aligns itself with misogynistic notions that girls and women alike are ‘phony’ fans, only getting comics for the clout or appearance of being a fan. It’s a ridiculous notion even trying to get to the page but informs the tone and world-building of this series.

The hook of the book is a group of ‘fans’ – which deserves to be put in the hardest of air quotes – decided to break in and steal a valuable comic from the actress of a CW-esque superhero TV show. Maisie Wade, the actress portraying the character of Red Rogue, doesn’t make an actual appearance in this issue outside of the last page, showing up in a depiction of the TV series as the book’s opener. It’s an excellent way to load action upfront before the book moves into a snapshot of these fans, stagnant depressing lives. May roots the issue’s p.o.v in Kyle, the voice of reason and certified nice guy™ who tries to defend the show and by extension Maisie, before being brutally shut down by the other members of his group. Paired with the opening sequence devolving into a vitriol fest between nerds, led by Dodge the comic shop employee threatening to kick anyone out who disses the comics but not the show. It’s an excellent, and efficient scene setter, telling the audience right away who these people are, and for many comic fans, a grim reminder of what goes on in many comic shops.

From there, the issue continues to dig deeper into the dynamic of Kyle and his group, moving from scene to scene of them complaining about the quality of the show, how it ruins the comics, etc. The only moments that don’t feel revolting are the glimpses May shows of Kyle’s home life, where he attempts to connect with his alcoholic father through the Red Rogue show. Any comic fan or overly enthusiastic kid can relate to the scene of trying to explain an interest to a disinterested parent, who just doesn’t get it. Kyle, who seems to be the only one in the group interested in creating – he’s almost always seen sketching or drawing – has to watch as his father destroys his art, and sets him into a spiral that catalyzes the story. May’s script is refreshing because it doesn’t use those troubles at home as a justification for Kyle and the crew’s actions. The moment lets the script hit the gas, and a plan begins to form, May uses the tropes of heist stories to get the issue from point a to b, not wasting any time. It’s an extremely effective script, balancing the character beats with the simmering plot, using the heat of these toxic fans to root the fairly standard tropes in something volatile.

Volatile is a great description of Justin Mason’s art as well, the book shining in moments where emotion and action can explode. The book opens and closes on these volatile moments of action, the first being the climactic fight of the Red Rogue TV show, while the ending is a look ahead to the group fighting Maisie in what one can assume to be future issues. The action is raw and kinetic, evoking a style that falls between Declan Shalvey and Daniel Warren Johnson. The use of line work to indicate not only motion, but frantic, gritty action is excellent and fits in the perfect tone with the book. Mason’s art doesn’t neglect the more mundane life of Kyle and his group (I struggle to call them friends based on the writing and expressions Mason renders) and the book ensnarls in the quiet moments as well, as they still have that energy lurking under the surface. Mason’s panel work is great, giving the book a quick, non-stop pace, ensuring that the story never drags while revealing more about this group’s hang-ups and dynamics.

Pairing that style with Fattell’s colors and Otsmane-Elhaou’s lettering is a stroke of genius, both working to magnify that fraught atmosphere while keeping the pace moving. Hassan’s lettering sells the emphasis as Dodge bemoans the quality of the Red Rogue show or the moments where Kyle or Yuri, another one of the crew, tries to quietly admit things that contradict the more toxic bits of the fandom. Farrell’s color does a similarly excellent job of building on that emotional state, with plenty of reds and harsh colors worked into scenes, like flashes of rage not uncommon for fans like this, who seem ready to blow their cool at the wrong word or issue number. If I had to come up with a name for this color palette, I’d call it the “Well Actually” mix, since it works in tandem with the underlying emotion and tone of the book. That coloring explodes off the page in the last few pages of the issue, the action sequence working as an explosive flash of orange and red that feels like a shift into a new direction while being a natural progression of the book’s emotional throughline. Both the lettering and coloring work to reinforce the book’s powerful statement, and heighten the edge the audience will feel like they’re sitting on reading this book.

Rogues’ Gallery #1 comes off the rack hard and fast, laying an excellent groundwork for plenty of carnage and mayhem to come. That paired with frenetic and captivating art, rage-inducing coloring, and dynamic lettering makes what could have been a by-the-books slasher into something distinct and rapturous in this climate of fandom. Those elements, paired with the knowledge of the creative team and their previous work, make me excited to see not only where the issue goes, but to see May's splash in the comic landscape. It’s clear she not only has the technical skills but a strong voice that deserves to be heard. Rogues’ Gallery #1 makes the case for the series to be added to pull lists immediately.