Rogues’ Gallery #2: The Trauma Is Coming From Inside the Phone 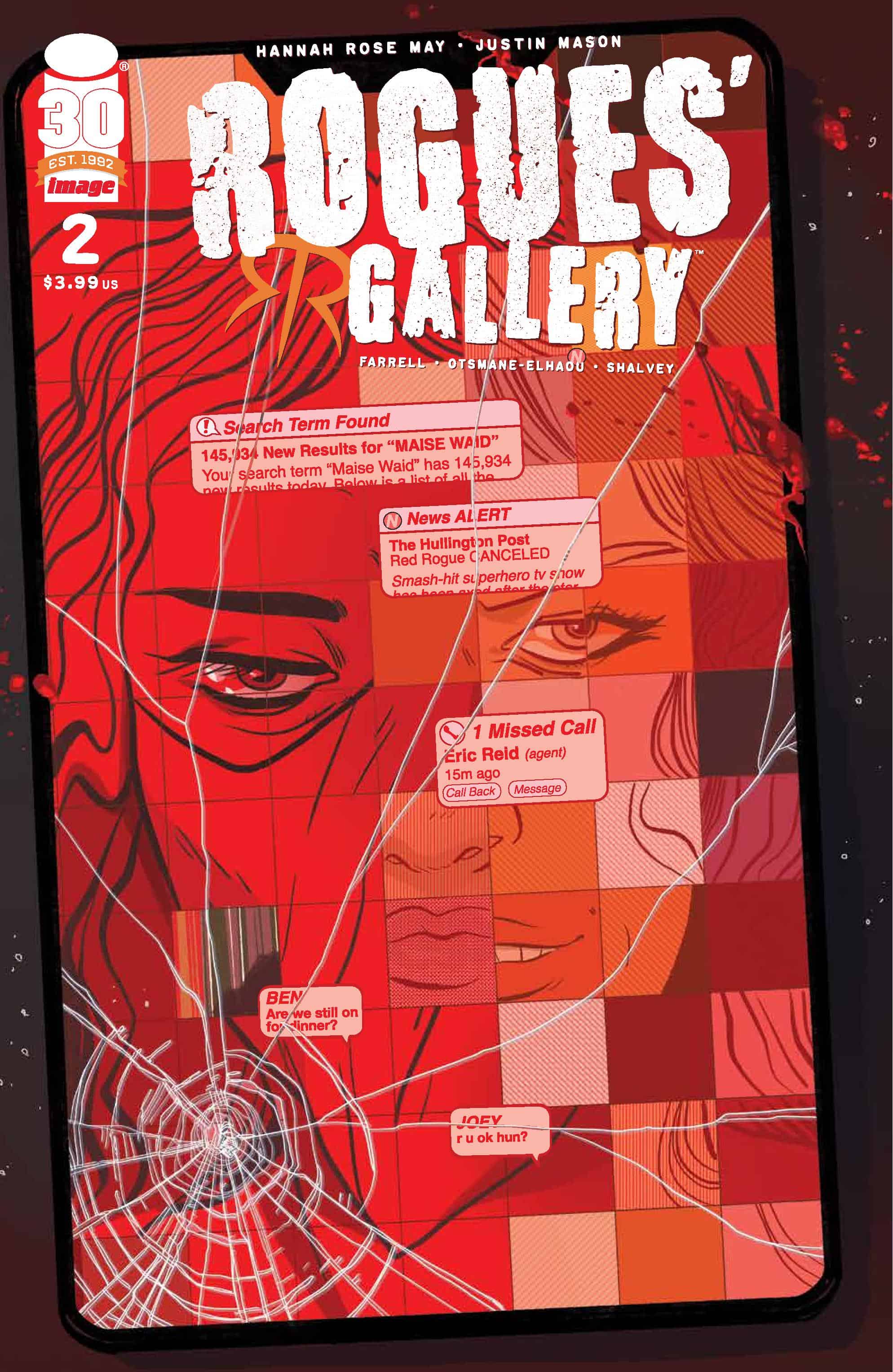 After years portraying popular comic book character the Red Rogue, Maisie Wade is ready to retire the spandex suit. But when her abrupt exit from the Red Rogue’s TV series leads to its cancellation, Maisie finds herself targeted by a group of unhinged home invaders who want to teach her a lesson.

It’s not a revelation to say that social media has gripped society and altered our brains. There are countless stories of how checking Twitter has become a routine so entrenched in a person that it becomes a phantom gesture, in the same way, Phantom Vibration Syndrome gives the illusion of a text message or notification.

Something art and pop culture still struggles with is how to incorporate that intertwined nature into works. For every inventive way, a movie or TV may bring a text chain or social media age to screen, there are 10 more that do so in the most boring or hard-to-read way possible. A comic like Rogues’ Gallery is breaking that trend, infusing the online presence onto the page in a visually interesting way, while also using it to reflect the sometimes overwhelming effects these digital platforms can have on a person.

Rogues’ Gallery #2 – written by Hannah Rose May, based on a story by May and Declan Shalvey, with art from Justin Mason, colors by Triona Farrell, and letters by Hassan Otsmane-Elhaou – doesn’t immediately pick up on the home invasion started at the end of the last issue, instead choosing to branch into Maisie Wade’s perspective as it runs parallel to the opening issue. The bulk of this issue focuses on how the world beats down Maisie, from her job (sometimes literally) to social media, and even her intrusive thoughts. May’s script takes Maisie through the building conflicts that cause her to quit the Red Rogue show, her attempts to do something as simple as picking up her prescriptions, and her joy at acquiring a rare comic.

It’s an excellent choice to continue the tension from the last issue while giving insight and narrative agency to the actress. May reveals that Maisie is a fan of the comics, and just like any other fan, wants to share in the thing they love. The more the script reveals about Maisie’s passions and the world’s refutation of them, the more heartbreaking it is to see how toxic fans twist and poison that enthusiasm.

In a great twist that refutes the fan’s assumptions about Maisie, she’s fighting at every turn to make the show accurate to the comics, something the studio doesn’t care about. The script and story are an overwhelming amount of cynicism that is perfect for the world May is bringing to the page. It’s a testament to May’s skills as a writer to plop this weight on the reader’s chest and keep it pushing down through the continued tensions and reclusive to the world Maisie is forced to live in. On its own, the script does a great job in setting that tone, but the other elements of the book, the art, and lettering, match and then expand on those weightier tones.

Mason’s art continues to thrill in this second issue, even in scenes that echo the first issue. Just as May’s script roots the narrative perspective in Maisie, Mason does a great job carrying that perspective into the art, conveying just how ragged life has worn Maisie down. She is almost always drawn with pale skin and baggy eyes, and Mason imbues a weariness in her eyes that haunt the page. It’s a little detail that does a lot to sell where Maisie is emotional as the home invasion looms.

The visual callback and symmetry from the TV show fight in issue one is a strong choice, but the moment shines when the artist gets to show the fallout from the action sequence. Mason’s action sequences, both the on-camera stunts at the beginning of the issue and Maisie’s training at home are both visceral and kinetic, utilizing striking lines and an interesting background effect to imply the hectic nature of a fight.

It dramatizes the fights and gives them the energy of a superhero comic, while still placing this book firmly in a gritter world. But even more than the actual fight scenes is the follow-through in the art, where Mason can show the effects of that action and violence. It’s a bloody nose and black eye that hurts less than implications and speculations from the fans and media.

Social media and its influence is another major aspect of the book, and the way it’s visually integrated into the comic is amazing. The first issue had some of these moments where a panel or page would shift into the digital world. It might be someone’s Twitter feed, a round of pop culture clickbait pages, or a message board, but every time that shift happens it’s a clear and distinct change on the page. Otsmane-Elhaou is one of the best letterers in the business, and his talents shine through every page, but just as the data pages have come to define the current X-Men, the social media pages in this series are a central aspect.

Sometimes a notification box from a phone will interrupt the panel, or the replies to a post bisect the panel. It underlies just how intertwined day-to-day life and the digital landscape have become. Those uses of social media also feed into that weight on Maisie’s shoulders, as she seems under a compulsion to check the vitriol being spewed about her, every nice or supportive comment being swallowed by the worst dredges of fandom. It’ll be great to see how these elements continue as the story moves into the home invasion in the next part of the story.

Rogues’ Gallery #2 is a harrowing tale of fandom gone wrong and builds continued tension by mirroring the events of issue one through Maisie’s perspective. The issue takes everything that worked in issue one, and refines it here, while also giving a better sense of the fallout of the physical and emotional violence against Maisie. Mason’s art works in tandem with May’s script to dive deep into Maisie’s psyche, revealing her never-ending fight to honor the comics she loves, and how the world seems to reject that.

If the first issue of Rogues’ Gallery flew under your radar, it’s not too late to catch up before the plot explodes. It’s a book that works on multiple levels, scratching an action-oriented itch along with offering a deeper commentary on the state of fandom and the toll it can take on people – and women specifically.

Rogues’ Gallery #2: The Trauma Is Coming From Inside the Phone