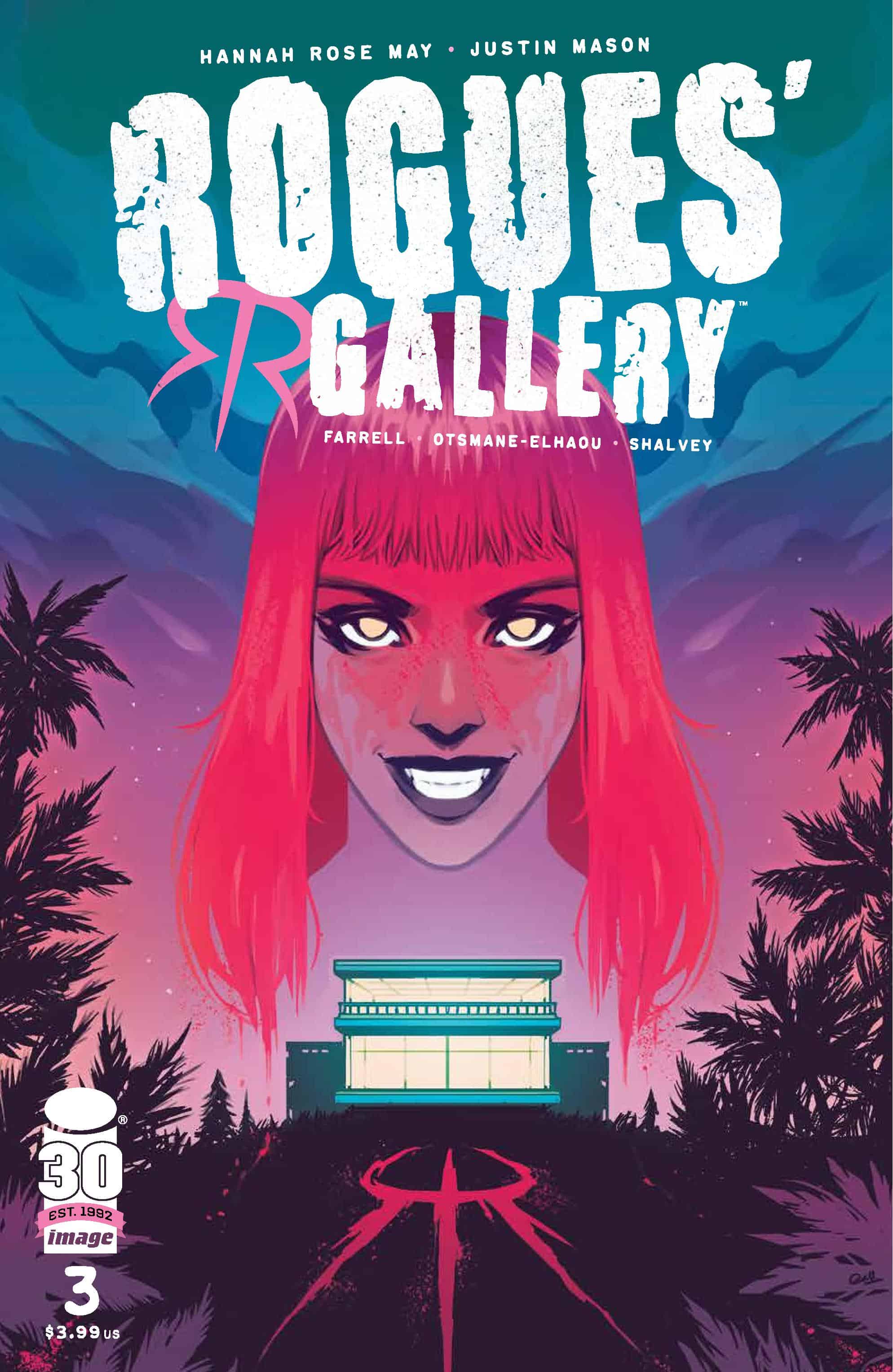 Storylines collide head-on and the terror begins as Maisie finds herself trapped in her own home by unhinged costumed intruders. Confronted by the Red Rogue's villains, Maisie must fight back if she is to survive their sinister plans. Blood, death, mayhem, and a dark revelatory cliffhanger lie ahead!

Tropes and expectations can sometimes work like a handy wrench or ratchet for stories, serving as a fulcrum so that a storyteller can apply additional force to lock the narrative into place. It’s not a shortcut or cheating to use a wrench to lock in those bolts for the new furniture, but it is possible that applying too much force, or not getting the threads aligned, can cause damage to the final product. The same thing can happen in stories, usually when a trope becomes a cliche, or too many tropes are stacked together without threading them with something original, like a theme or character. A good storyteller, like a good craftsman, knows a perfect balance and ensures that the tools (tropes) work for them, and not the other way around.

Rogues Gallery #3 – written by Hanna Rose May, based on a story by May and Declan Shalvey, with art from Jason Mason, colors from Triona Farrell, and letters by Hassan Otsmane-Elhaou – syncs up the two plotlines from the issues one and two, as Kyle and the group of ‘fans’ start their home invasion. Dodge has everything planned for the t, and the group quickly enters Maisie’s home. The power’s cut, the internet and phone lines are jammed, and the alarms are disabled. It’s the set-up for an easy comic heist, but like any good story, the plan derails as Dodge searches for Maise and turns up empty, the actress having left for dinner during the previous issue. It’s in the reveal that Dodge has cased the place, and catfished Joey (Maise’s house sitter) for information, before killing him.

The moment is the first shocking turn of the issue, signaling the violence that’s to come. The group has some reservations about the plan, but their festering anger and entitlement shut down any sense of conscience. As Maise and Ben return home with a sense of something out of place, the group jumps on them, in pursuit of the actress that’s wronged them. After a tense chase through the house, Maisie and Ben get a few good hits in and take some damage before reaching the memorabilia room. By the end of the issue, things make even more sense, as it’s revealed that Dodge plans to recreate the story of the comic Maisie bought in issue #1.

May’s script kicks the issue into a new gear, in part thanks to the focus on more action and the focusing of the setting. Outside of a few scenes early on, the entirety of the issue takes place in Maisie’s home, which is spacious enough that characters can wander without immediately seeing one another, but is still small enough that encounters will be hard to avoid. That paired with the opening structure of a heist going wrong, before pivoting to a deadly game of cat and mouse, giving the book a potent punch, utilizing a strong sense of momentum that heightens the twists of the issue. The biggest twist is that the invaders’ plan is nothing more than Dodge’s demented attempt at the deadliest self-insert fanfiction, and May ensures that the toxic entitlement is clear the moment the motivation is revealed.

May’s script also straddles the line between utilizing and then subverting expectations, letting the characters and their motivations dictate the story in an organic way. One may say it’s a trope for the antagonist to monologue at the hero, or let them live to then kill them later on, but for a character like Dodge and the cosplaying invaders, it makes sense. Not only do we learn they’re emulating plots from a comic, but these are ‘fans’ wanting to exact their wills on those who’ve wronged them. Logic flies out the window in service of the source material, and May’s script makes that clear in every beat.

Mason’s art matches and exceeds those elements in this issue, bringing a new heat to the action sequences. Since these sequences take place in the real world, and not behind the camera of Maisie’s show, the art adapts, giving the violence a more grounded look. Mason’s linework is still kinetic and exaggerated, but it’s also raw and clumsy like a normal person would be in a fight. The weapon effects, such as Ben’s meat tenderizer or Yuri’s knife slashes, sell the frantic actions as well, blurring across the panel to showcase the effort to kill or defend.

Mason channels a style that resembles artists like Daniel Warren Johnson, who channels artistic stylings more common in manga than in western comics. The expressive linework is what sticks out from the medium, used to convey power, strength, or emotion in a way that is often separated from color. That adoption of the technique, whether it be intentional or subconscious on Mason’s part, sells the urgency and viciousness of both parties. That paired with the sometimes more simplified, but still, evocative backgrounds and panels make this issue a triumph for all aspects of the craft but hammers Mason’s ability to render a good, expressive action sequence.

The action is bolstered of course by the coloring and lettering, the three working in tandem to give an extra crunch or flourish to the action and story. Farrell’s reds and grays are what immediately pop throughout the issue, the blood serving as an effect of Mason’s rendered violence. The moment that stands out in terms of coloring this issue is the panel of the invaders displaying Joey’s body. Mason draws the villains and Joey in silhouette, and Farrell uses a deep red to fill in the panel’s lighting, surrounding the black figures and evoking a bloody mess. The red calls up the pattern of blood splatter, with the invaders rising from the red. Maisie’s scream is lettered in a massive red font as well, separated from the background but mirroring the emotion the color evokes.

That coloring creates a sense of bloodshed, rage, and violence that shocks, but Maisie then realizes the scene matches her comic. The scene is almost panel for panel recreated in both the actual sequence and then in the comic towards the end of the issue, the red reappears slightly muted. Farrell touches the comic with blood from Maisie’s hand, first staining the specific scene, and then one with a separate background. It’s such a little touch that feeds into the notion of these ‘fans’ corrupting something that Maisie loves, first Joey, and then her comics.

Otsmane-Elhaou’s lettering gets new opportunities to play in the space that May and Mason create, shifting from the social media and graphic representations of fandom, and to expressions of violence. The first instance of this lettering paradigm shift is when Dodge shoots Joey, the gun’s ‘bang’ created through a matching use of white against a black background. The actual SFX resembles a font with a splattering effect, as though it’s ricocheting off the page like blood off the surrounding area. It’s an effective way to match the energy of the wound and is one of the primary instances of what the lettering does to elevate the already strong action sequences for maximum impact.

In the fight sequence between Ben and Yuri, Otsmane-Elhaou’s lettering choice to render the hammer swing with a full ‘crunch’ utilizing the end result of the attack rather than the movement, sells the toll the violence takes on the body. The scratchy font, encased in a red arc used for the SFX helps to sell that impact and informs of the injury that Yuri sustains. It also gives credence to the next panel, when Yuri goes flying, the lettering imbuing the act with an additional force that makes the reaction believable. It’s interesting that the hammer is the only weapon in that beat that gets an onomatopoeia, as Yuri’s knife, used in both a slashing and stabbing action, lacks any SFX.

Rogues’ Gallery #3 is a rush of an issue, picking up momentum and running with it, utilizing a strong script and kinetic art to click more pieces into place. May’s script does an amazing job of taking genre tropes and turning them into succinct plot points, letting those expectations set the foundation for unexpected but organic plot twists. Mason’s art takes that energy from the script and feeds it into the linework, stretching and stylizing the arcs and actions of characters to ensure every attack has the force behind it. That force pairs perfectly with Farrell’s coloring, and Otsmane-Elhaou’s lettering choices. Each one of these craftsmen knows how to use their tools in this issue to thread the impact of the violence, along with the twisted thematic relevance.