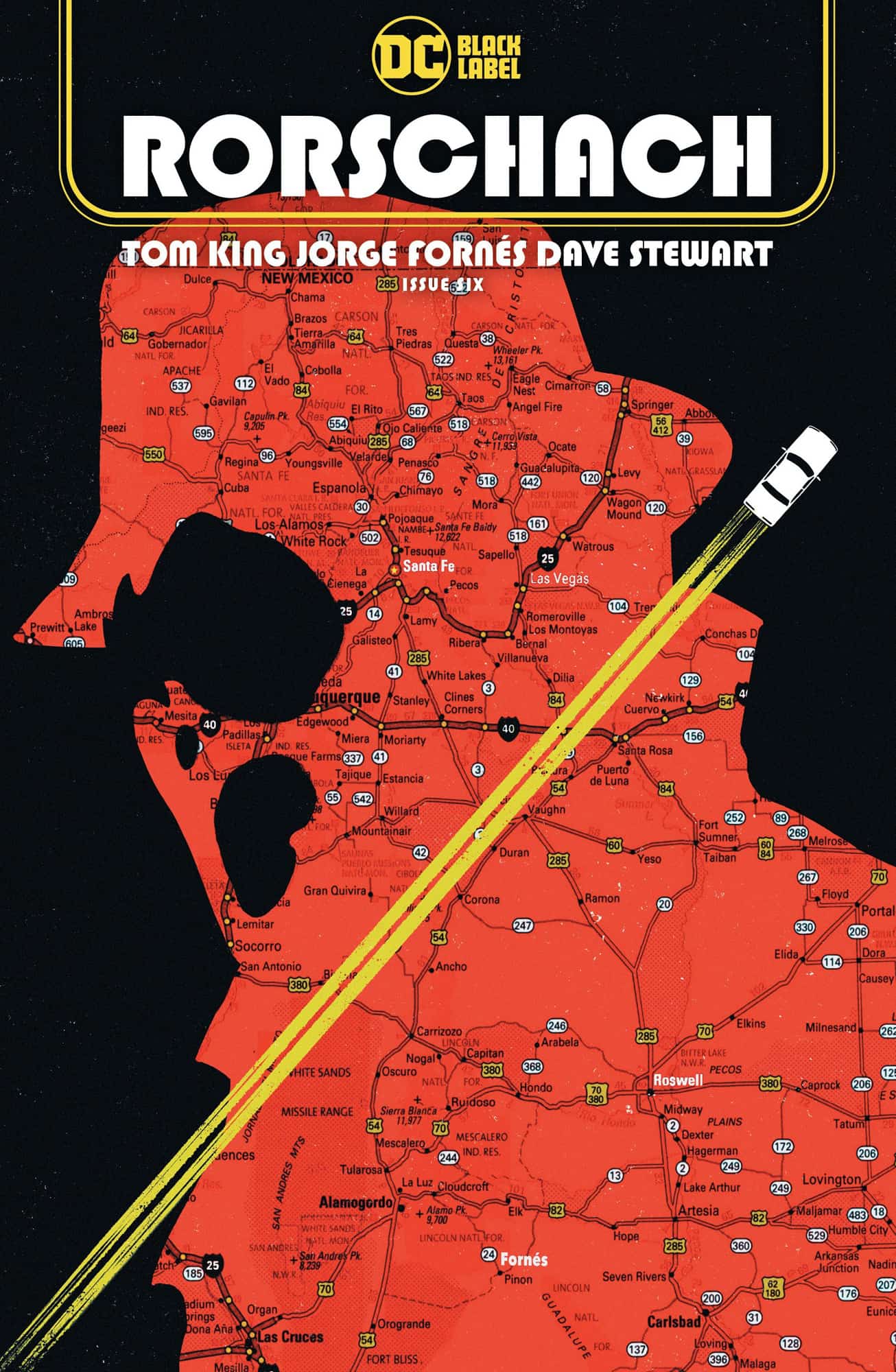 The mystery as to how and why there is another Rorschach continues to deepen as motivations are revealed, ambitions are laid out and real life blends with art in unusual ways. Can our Unnamed Detective put the pieces together before another tragedy strikes?

If we could divide the book into particular arcs, the first issue would simply be “The Set-Up,” issues two through four would be “The Kid” and issues five through seven would be known as “The Conspiracy.” 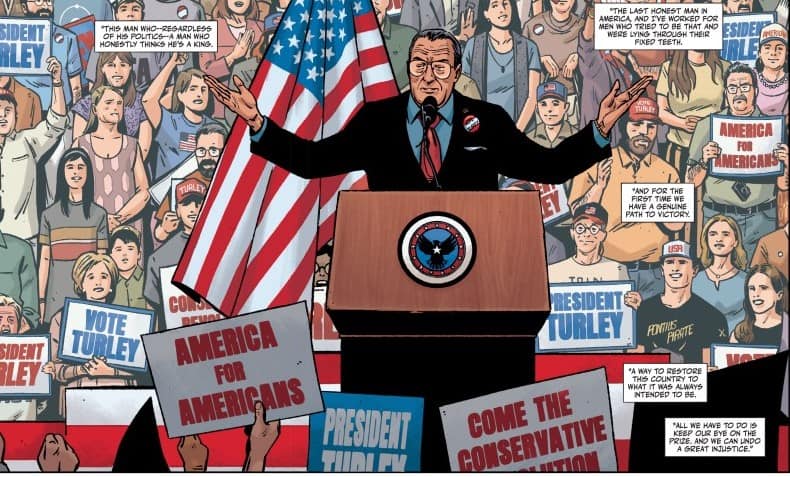 Where we last left off, we had learned the motivations behind Laura Cummings, aka The Kid, wanting to recruit Wil Myerson in her crusade to kill Governor Turley; believing that The Squid had another imminent attack and that Doctor Manhattan had hidden the essences of Earth’s heroes within specific individuals, she would bring together a force to stop the evil monster. However, not everyone sees things that way.

Throughout these three issues, Tom King portrays Governor Turkey as a paranoid man who believes that President Redford hired The Kid and Rorschach to kill him, thus thrusting the story into a tale of political intrigue for an issue before delving into something of a psychoanalytical story of parasocial relationships and the power dynamics between fans and the creators of their favorite works.

Turley believes that Redford is out to destroy the American way of life, and that only he is the true paragon of true Conservative American values, having fought in Vietnam alongside the Comedian. His beliefs are contrasted by his smug nature, elegant office with a giant tapestry of The Comedian’s symbol and even a butler – if anything he is so detached from his people that the list of suspects is greater than he realizes as our unnamed Detective believes that the assassins had help from the inside as they got farther than should have been possible with Turley’s elite team of bodyguards. 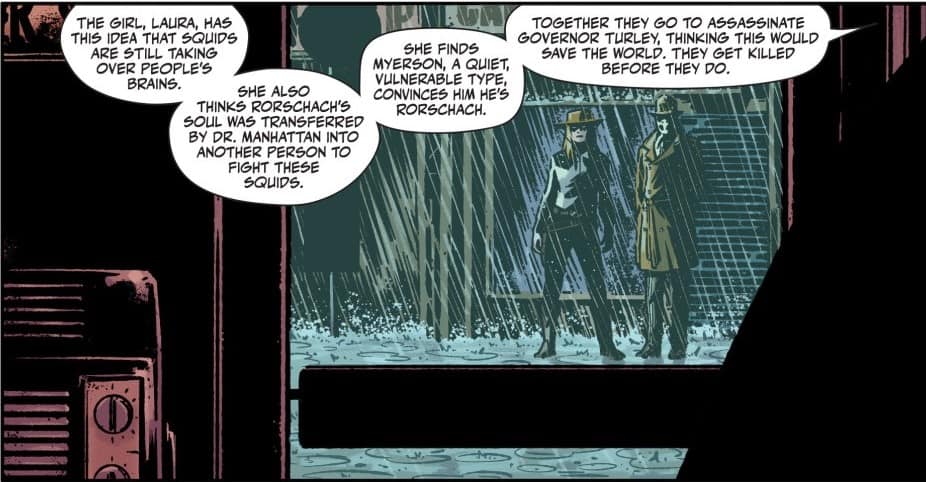 On the other side of the spectrum, The Kid’s obsession with the works of Wil Myerson leads her down the path of becoming like one of his lesser known characters; The Citizen, a vicious vigilante similar to Rorschach who dished out punishment by his own means. Through back and forth letters, Laura communicates with Wil, both of them talking about their lives and allowing readers to see how they gel so well together – him being a shut in that loved reading and her never being allowed to read because of the impending Squid Invasion. Laura believes that Wil is one of the few people in the world that could understand her and All, having become dejected and hateful of the world, finds a kinship with this young fan of his.

Even further, Tom King illustrates how the trauma of the Squid attack affected everyone with special guest character, Frank Miller, making an appearance to talk about his book, The Dark Fife, and how he tried to change a children’s character into something more serious and dark, but how it ultimately meant nothing after the Squid attack. He thought his new vision would be worthwhile, but the real darkness of the world showed him that sometimes the light of something for children was infinitely better. Using some real world history of Frank Miller and the seance tape of Otto Binder and Randy Cox, King molds it into the method with which Laura creates all of these Rorschachs.

Jorge Fornés, Dave Stewart and Clayton Cowles each play to their strengths with these issues, giving each their own thematic feel and drawing readers in with their amazing visuals, colors and stellar bits of lettering. 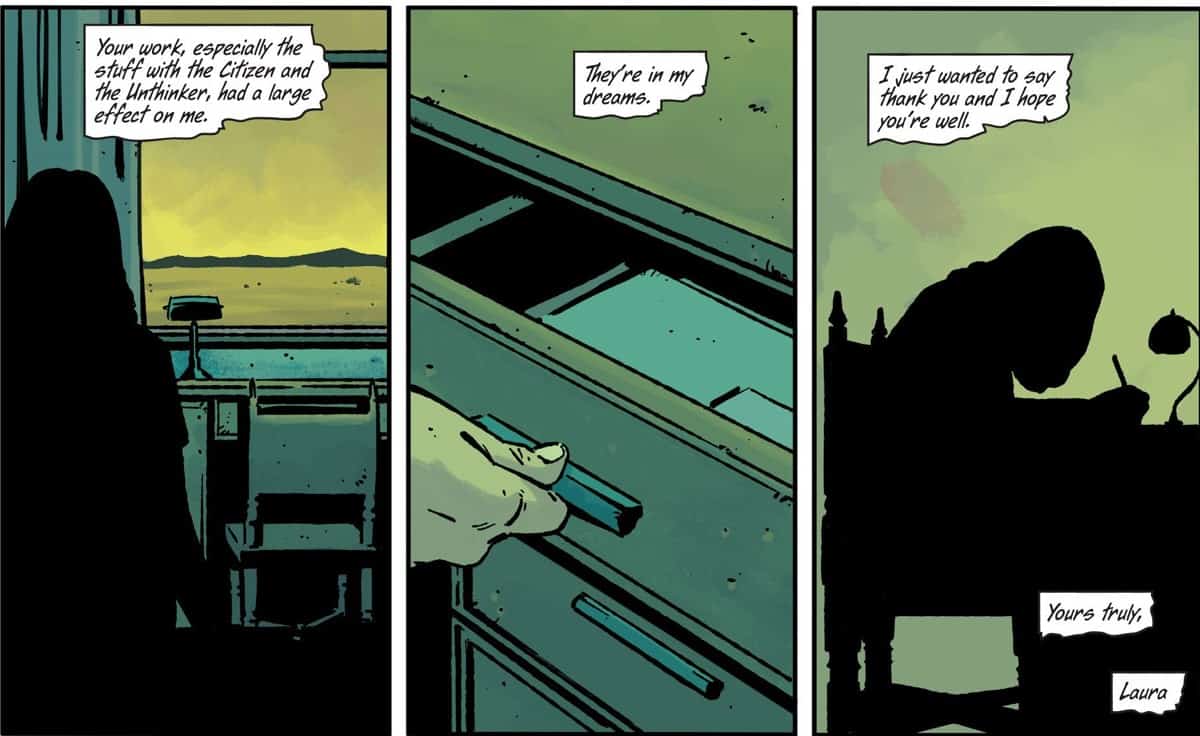 Jorge Fornés is an amazing artist that does his best work when it comes to the subtlety of Tom King’s writing and direction. Facial expressions and body positioning remain his strongest suits as these three issues showcase his skill. Turley is drawn as the kind of smug politician that sneers at his people.He smirks, makes wild arm movements and has such wide, toothy grins that one can believe that calling him a bastard only elicits a laugh and the offer of a cigar because he also knows that it’s true. The beginnings of this are shown during the amazing Vietnam flashback where Turley is already full of bluster for being on the winning side, but then goes on to imitate the venomous smile of The Comedian as they talk about killing the Vietcong.

The panel layout of issue 6 with the back and forth between Laura and Will is amazing as it positions both of their lives against each other – the blandness of Wil’s life and how still his life is compared to the tense sadness of Laura’s offers a feeling of being closed off from both of them but for very different reasons. Wil is often drawn expressionless because he doesn’t feel a connection to the world that appreciates his surface level Pontius Pirate character and Laura is drawn expressionless because she can’t allow herself to feel connections for people that might be controlled by the Squid.

The best example thus far, however, has to be how well Fornés captures the crazed and haggard look of modern day Frank Miller. His wide eyes, showing the glints of wonder he used to have, but also reflecting the pain of seeing how the Squid affected the world and his own writing gives us an insight as to how Laura was able to somehow change him into another Rorschach. Fornés shows us a side of Frank Miller that is rarely seen; the defeated man that regrets bringing comics into the age of grim and grit. 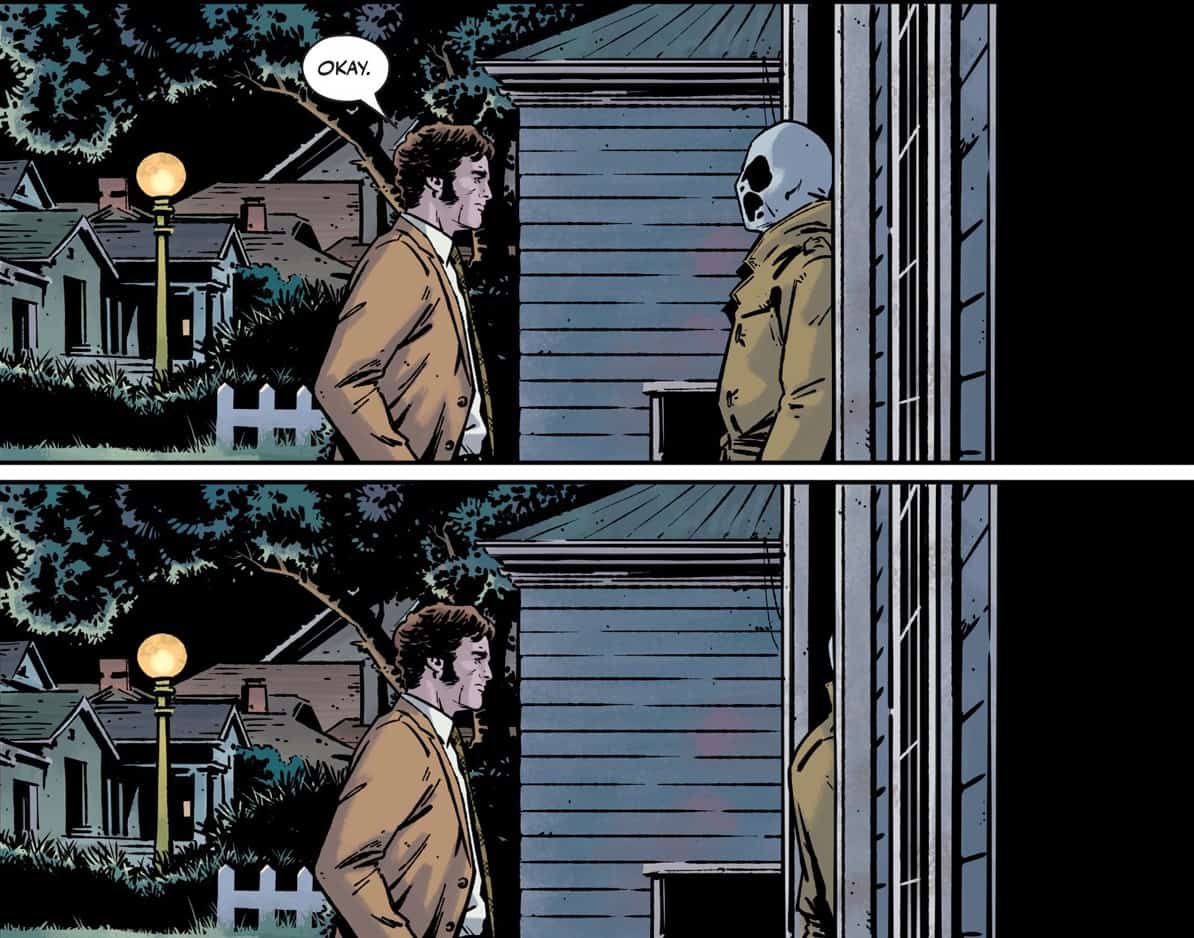 Dave Stewart’s colors never cease to amaze. From issue to issue, even when the same colors are used, there’s always a different thematic meaning when it comes to the characters. In one issue, red can symbolize the passion an Aide has for his governor and the future America that he hopes to bring about and in another, it can convey the rage of disillusionment after seeing one’s life’s work as being simplistic. Stewart’s yellows can convey the fear of not knowing what direction to face through life and settling on being a crime fighter, someone who hides behind a mask because they don’t know who they are without it – and at the same time be a color of optimism as that purpose is found.

Not only does he attempt to capture feelings, but mood as well. The oranges he uses during the Vietnam flashback scene capture the searing heat of a sky obliterated by the almost 400,000 tons of napalm dropped on the country. It evokes the sound of Creedence Clearwater Revival’s anti-war Fortunate Son and how America felt like the protagonist of the conflict through the colors setting the scene for The Comedian to look like a heroic figure despite all of the horrific actions we know he’s committed. Compounding this is how the person recalling Vietnam is sitting in a giant bathroom with blue walls, conveying his serenity with the atrocities he’s committed there as well.

And never let it be said that Clayton Cowles doesn’t deserve the respect that very few letterers ever earn because he does an amazing job. Not only are his word balloons excellently placed in every single issue, but his sound effects always capture the tone of the scenes. From the exciting and large BLAMMs that echo when gunfire is heard killing Rorschach and The Kid, but the RATATATATATATATATA that acts as an integral part of the background in Vietnam as the machine gun gives cover fire to The Comedian. 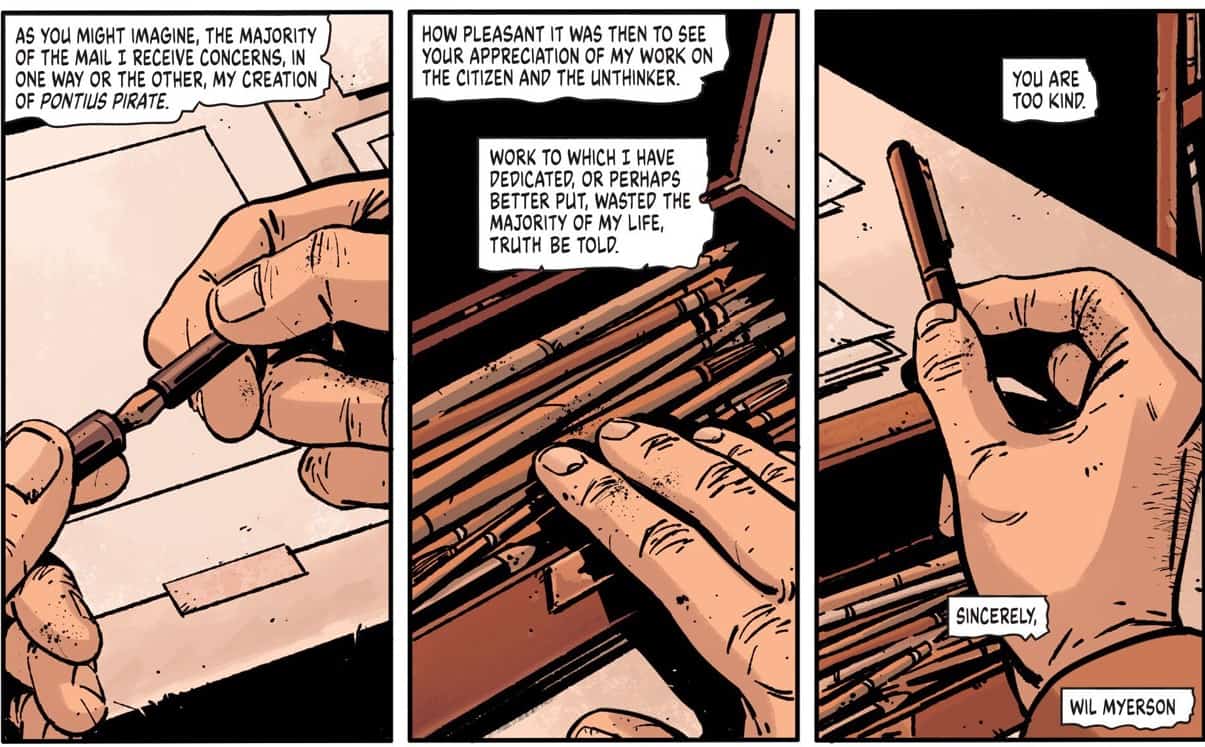 In some issues it’s the kind of bubbles that he uses that make the whole book even more profound, such as when Laura and Wil are writing back and forth letters and the word balloons almost resemble torn pieces of paper, seeming like their thoughts are being conveyed as they write them, filling up many pages of almost empty space with the perfect amount of bubbles and precise sizes to capture the isolation of the main characters.

Rorschach is great and Tom King (@TomKingTK), Jorge Fornés (@jfornes74), Dave Stewart (@Dragonmnky) and Clayton Cowles (@ClaytonCowles) have me hooked on this book and tell a deep and cohesive story that makes you come back for more. In terms of noir storytelling and a fairly great sequel to Watchmen, Rorschach tops the TV show so far and stands well above Doomsday Clock too!