The Inhuman Royal family is broken, their King is imprisoned, their Queen is dying, they are without Terrigen and have little prospect for the future. They need to make some changes while they still can. 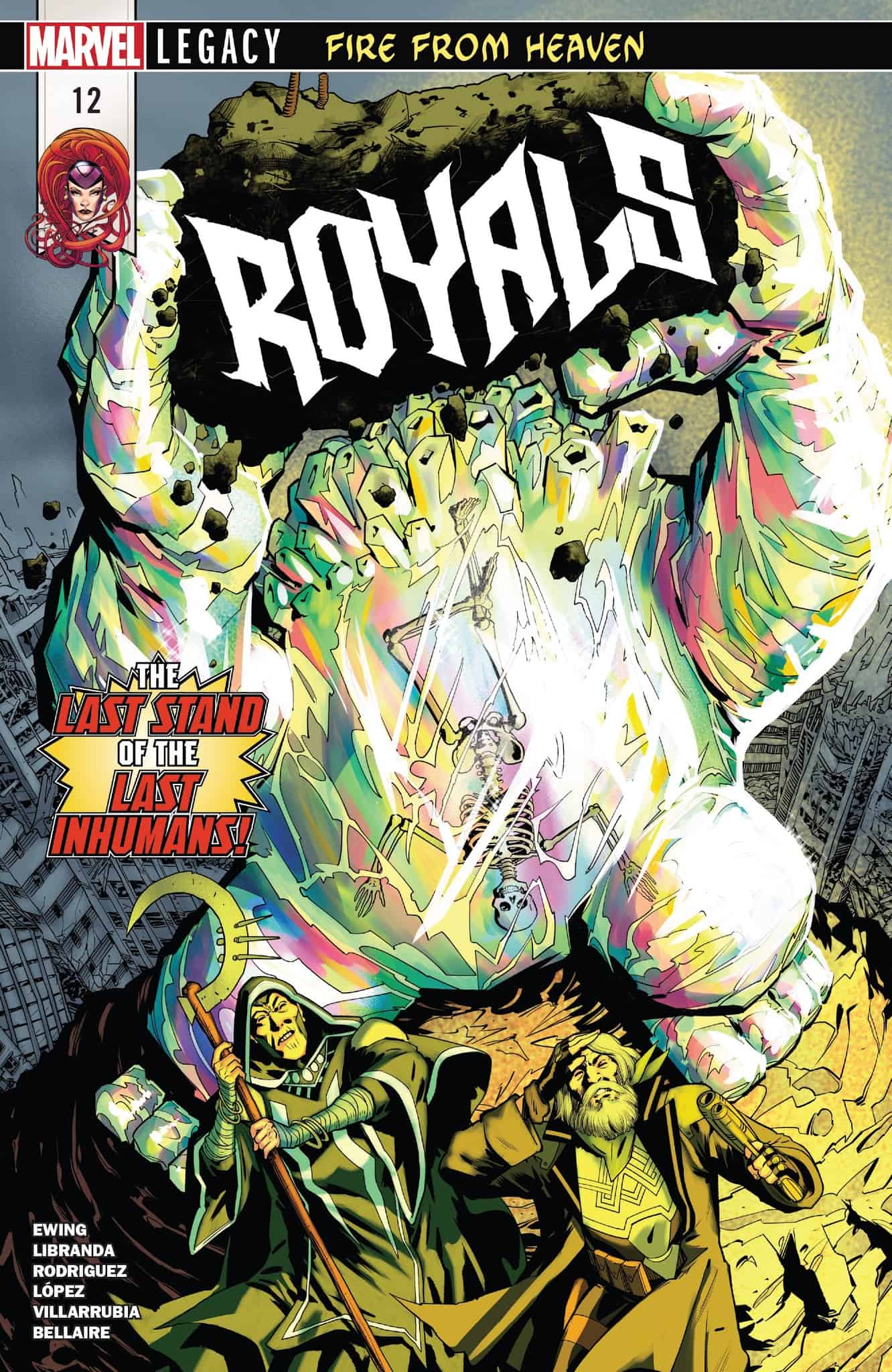 The Inhuman Royal family has been traveling the Galaxy in search of Primagen, the primordial material that the progenitors used to create the Kree and later the Inhumans. Last issue saw Medusa finally finding the material she sought, unfortunately, it came at a cost, Gorgon sacrificed himself in order to allow the family to escape. Now, traveling across the Galaxy in a power-based spaceship created by a powered up Flint, the family has nothing but time to reflect.

The Family is flying through space with no clear idea where they are or the direction they need to be going. Maximus theorizes that Noh-Varr’s Pocket Battlefield could be used to create a wormhole since it can alter physics. But in order to know how to do this, he has to be smarter, smarter than he’s ever been before, and for his intelligence comes from Terrigen, now that they have a pure sample of Primagen it should work even better. Medusa, depressed over the loss of Gorgon tells him to do what he wants, she doesn’t care. 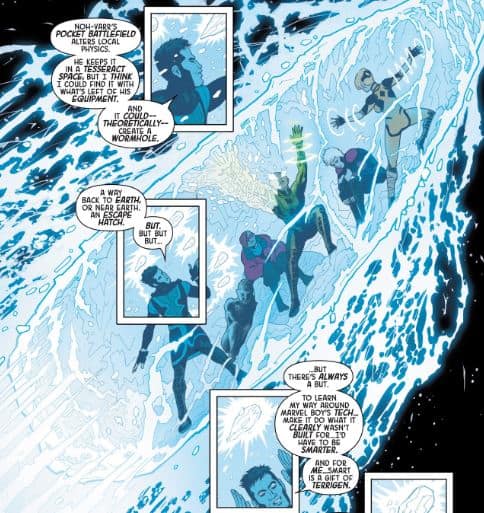 Maximus touches the Primagen, suddenly his whole life is in front of his past, present, and the far-flung future. He realizes he can hear someone talking to him. He is talking to himself, Maximus, the last inhuman, 50 centuries in the future. 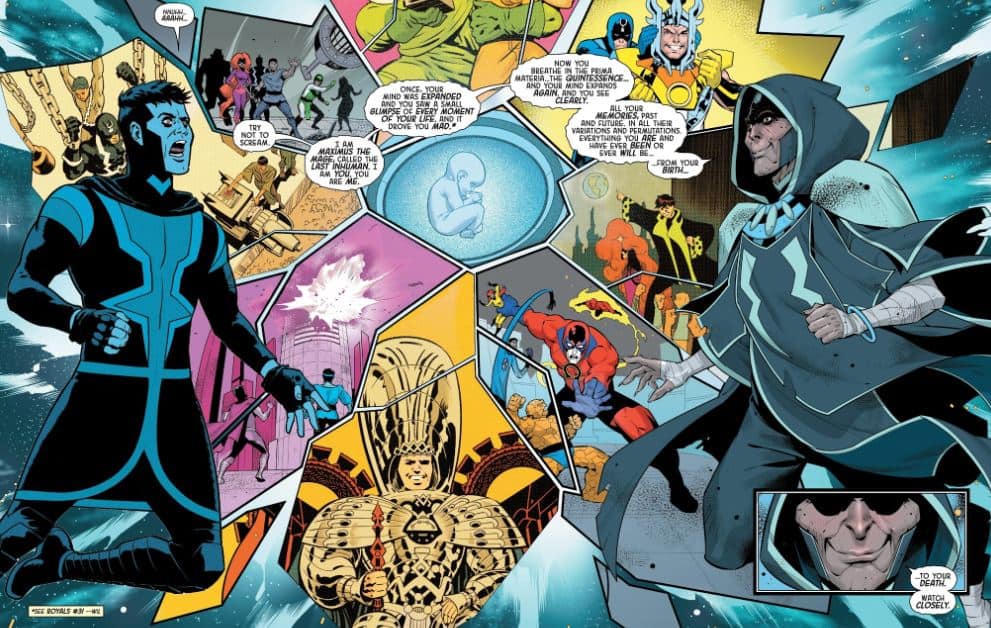 We cut away 5000 years from now, Noh-Varr the Accuser, Maximus the last inhuman, and Flint the Moon King’s corpse, temporarily resurrected by Primagen, stand in front of a giant progenitor ship the size of a city hovering over the ruins of New York. 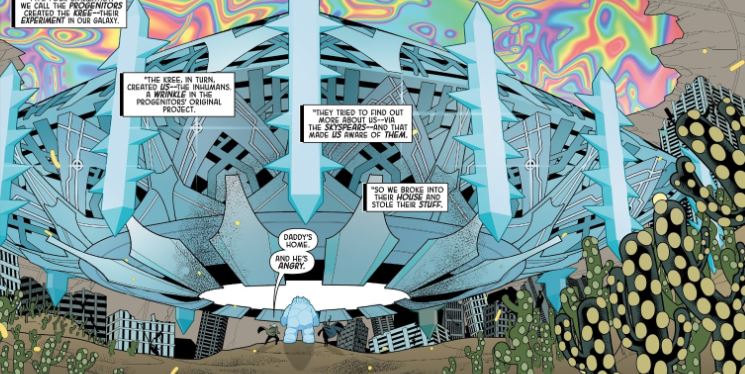 Suddenly the ship fires, Flint is able to absorb the blast, and Noh-Varr blasts his way into the ship. All along the older Maximus is talking to the younger, explaining that this is the end of his life and end of the Earth.

To find out what Noh-Varr finds inside, and whether or not they’re able to save the Earth, pick up Royals #12 in your local comic book store today!

As much as I like the two timelines being brought together this issue felt very convoluted and confusing. Two-page splash panels were used very often throughout and made it hard to focus on any one thing. Additionally, I would have liked to have known more about the character found inside the progenitor ship and the progenitors so far in the series have had almost nothing explained.

I have liked the last Inhuman, b-side story, more than the main story fairly consistently throughout, but now that it is brought to the forefront I feel like the story has stumbled a little, similarly, the art seemed a little below par this issue, particularly Maximus’s mouth was off-putting and strangely shaped at points. 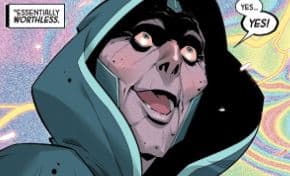 This old turtle snuck into the book somehow

There were a couple solid reveals towards the end that I chose to omit for the reader to discover for themselves that do make this issue worth reading if you are a fan of the series so far.

This issue is worth reading for a die-hard Inhumans fan, but I don’t see regular fans sticking around much longer if the book quality does not improve.