Runaways #18: That Was Yesterday 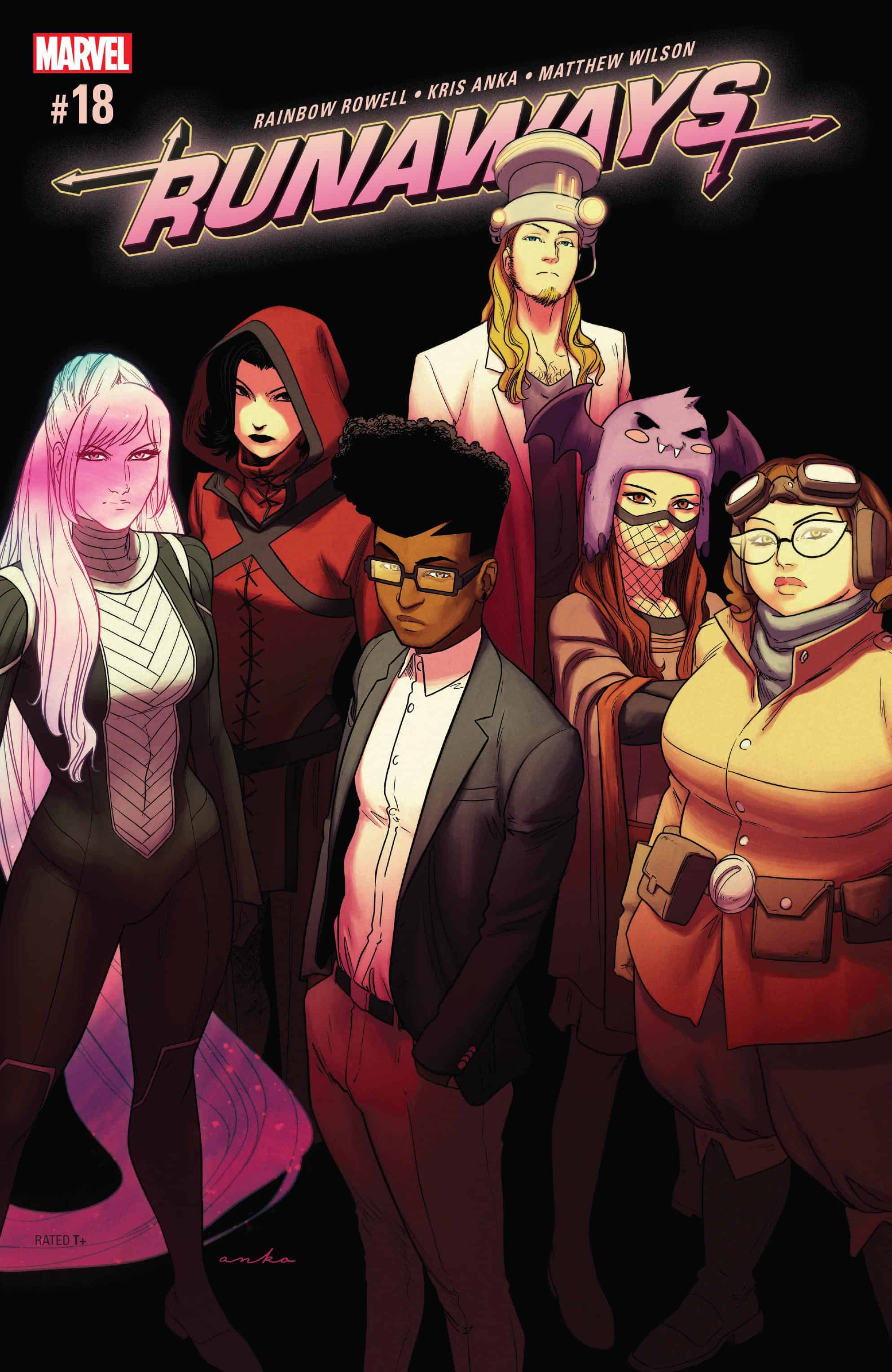 The conclusion to “That Was Yesterday” is here! The Gibborim have returned to take what’s theirs and destroy the world! The question for the Runaways is whether or not they get destroyed, too.
(And they don't! For now ...)

Runaways #18 is notable for several reasons, the most notable of which, is it marks Kristafer Anka’s Swan Song on the book. Anka had the Runaways serving looks, as they flourished under the majesty of his pen. I mean, just look at that cover. The Runaways were stylin’ on everyone, and flexin’ in their parents original, Pride threads. It’s just another testament to the genius that is Kristafer Anka. And as issue #18 marks his final appearance on the book, let’s enjoy it for what it is and turn back to Rainbow Rowell and her wonderful writing, as her prose is what allowed Anka to bring these wonderful interpretations of her vision to life.

The first page of the issue begins where the last one left off: The Runaways are in like, a really, really, bad situation man, and like with most things in life, it’s a mess of their own making. The very same ritual that made them the Runaways is also the one that threatens to be their undoing, and to end their entire existence. The Gibborim have these young heroes as their hostages, and Alex is threatening to resort to the most extreme measures in order to free them. Would Alex Wilder really slit T1000, I mean — Victor’s throat? Well, maybe, but in the meanwhile, Gert throws a wrench into his plans. One suspects that she’s doing this out of the goodness of her heart, but given her budding relationship with said Victor, her actions might have equally been influenced by her libido. 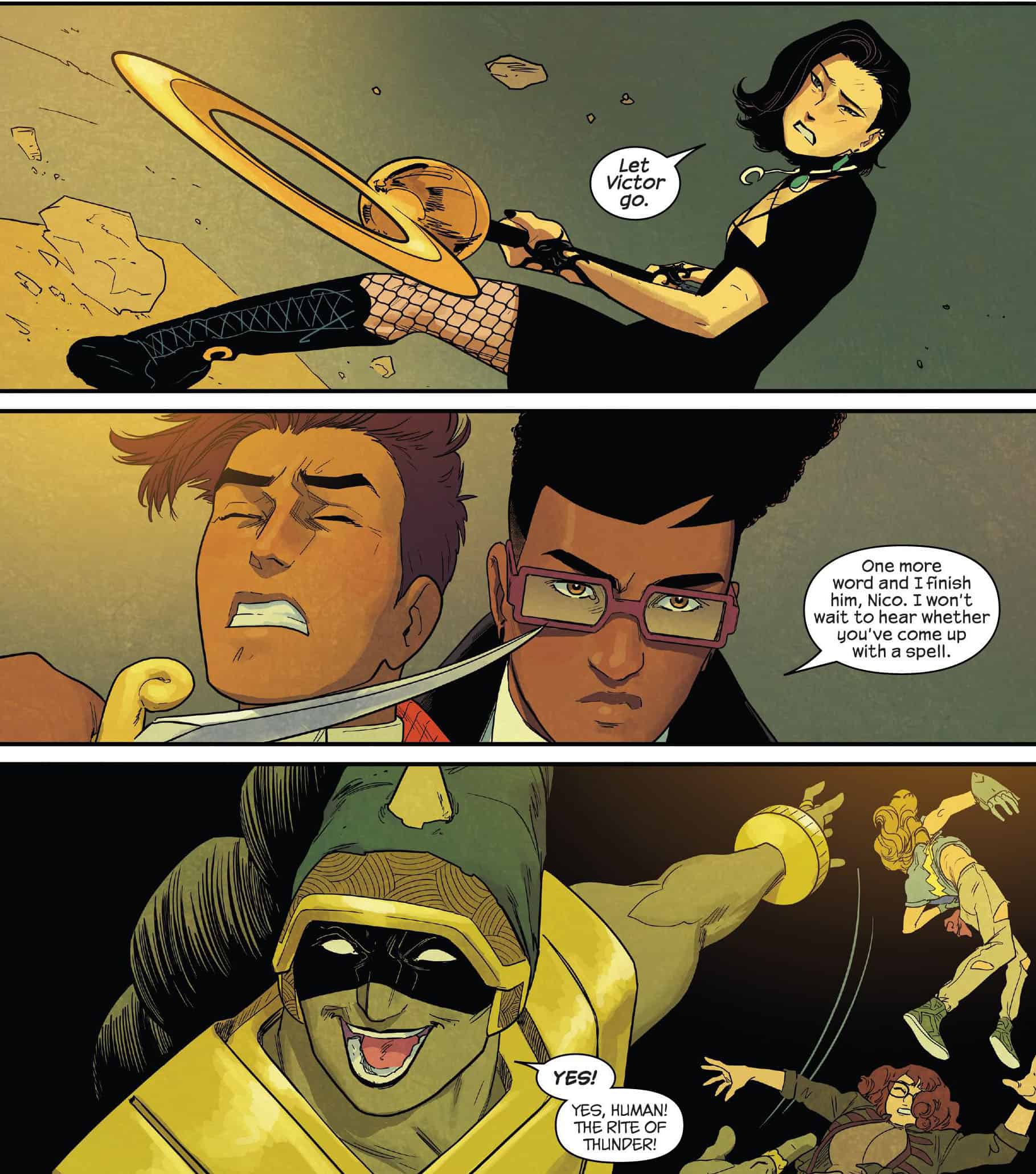 The fight ends with Gert throwing a Hail Mary and hurling the Gibborim off to a far away place, while simultaneously not being sure if she did the right thing. 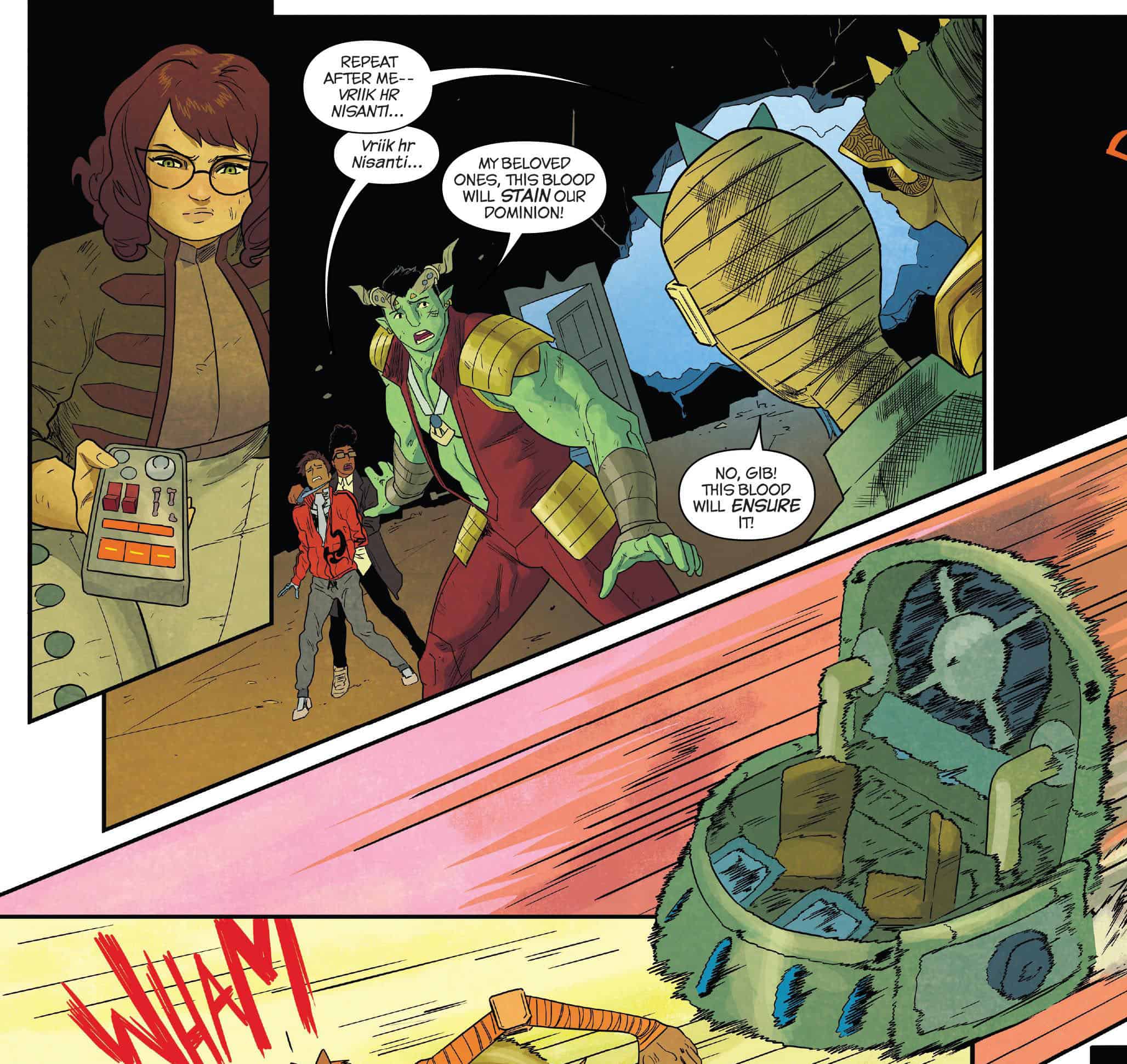 Her flimsy attempts at reassuring Nico and telling Gib that his family would have plenty of tasty souls to snack on, would attest to this. No worries though, as Nico’s hurt feelings are smoothed over with a celebratory kiss from Karolina, and Gert later offers to buy Gib a breakfast burrito (and one stuffed with human souls, presumably). She then heads off to find Alex and to see if he wants one too (this despite the fact that yet again, she thwarted his plans to betray them). 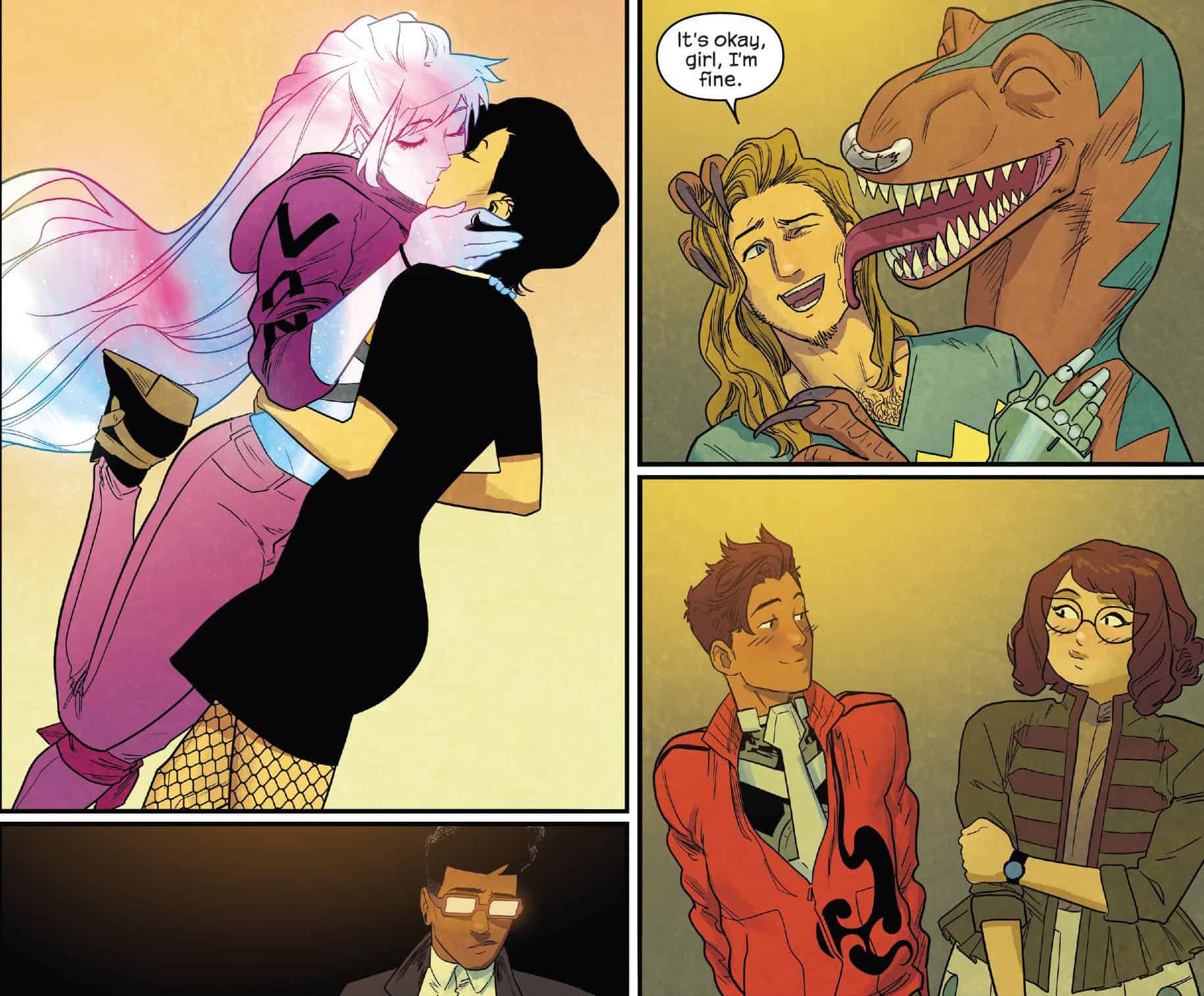 Gert may be ‘Team Alex’, but Alex is even more Team Alex, and is intent on showing it by making the team feel like they need him, way more than he needs them. (And he also might have found someone else who may accompany him on this particular endeavor.)

Rainbow Rowell, once again, does not disappoint, as the Cliffhanger Queen has us hooked on a feeling, and longing for even more during the final pages. And just where is Alex headed off to on his mystery endeavor? And who is the other, mystery Runaway who joins him on this particular journey? Tune in next month to find out, same Runaways time, same Runaways channel!

The end of the issue not only leaves you longing for more, but also with a  bittersweet feeling, knowing that this is the end of the current Anka and Rowell partnership. Anka and Rowell were like Nesta and Maldini, or Xavi and Iniesta, or (insert your own, symbiotic duo), who thrived off of one another, and had a stellar partnership that was fostered by their chemistry, which combined together to make a combustible interplay that was nothing short of a joy to watch. The next artist certainly has some big cleats to fill. However, I’m willing to give the appropriately named Andrés Genolet a chance to thrive with Rainbow Rowell, and to create something equally as memorable. 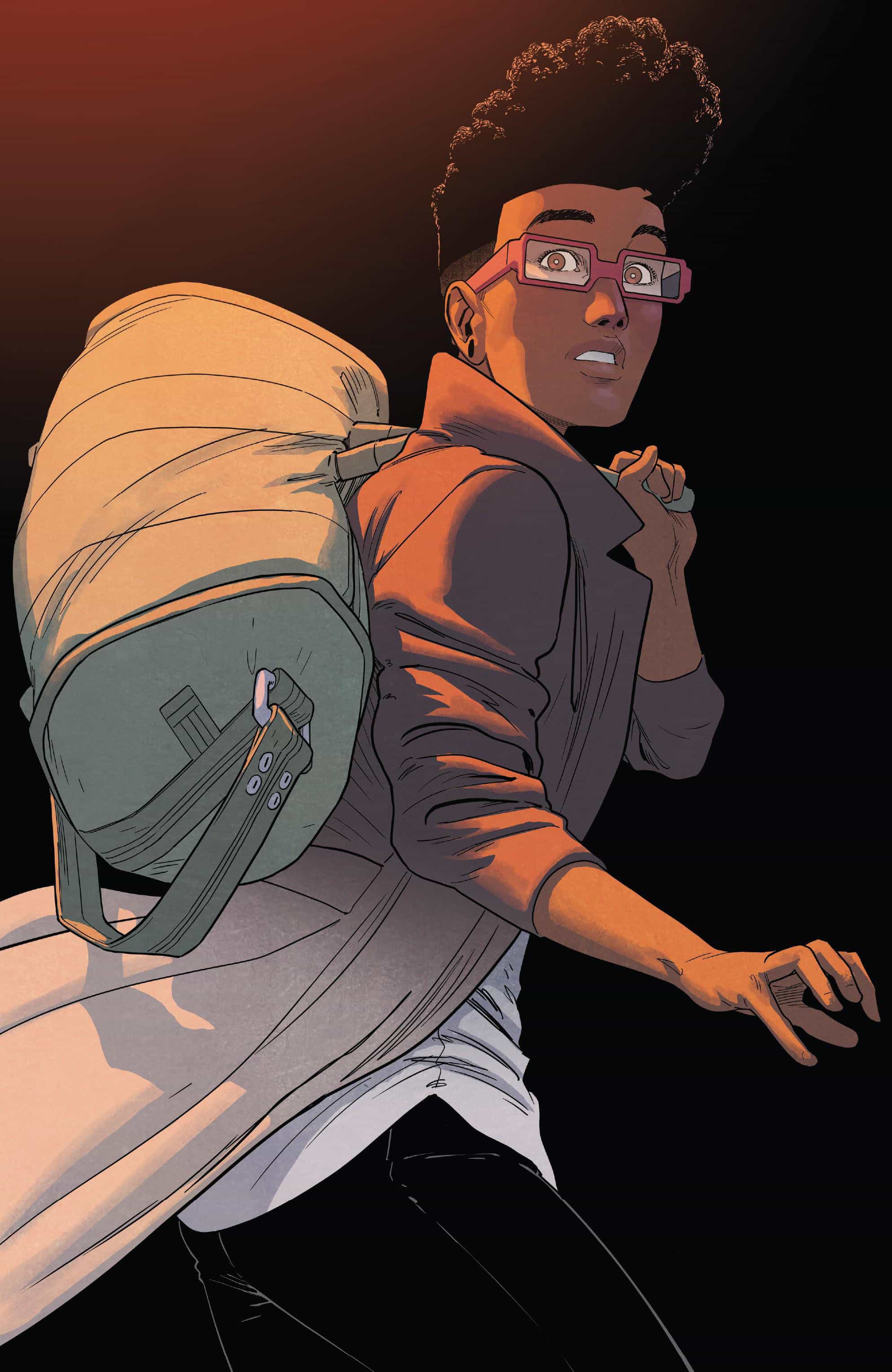 Runaways is still more hit than miss, and it's just as addicting than a well-written, serialized television show. And like any good addiction, it leaves you feenin' for more. We'll all miss Anka, but the book is so engaging and so good that we're also willing to give Andrés (not Iniesta) Genolet a chance, in order to keep producing a good product that feeds our addiction.

This is a smart, concise wrap up to this particular arc. Rainbow Rowell may not be without her faults, but the woman sure as heck knows how to write, and the comic continues to be something to look forward to, each and every single month of its current run.


Runaways #18: That Was Yesterday