A Lot of Things Had Happened During Those Two Years! (Runaways vol. 5 #02 Review) 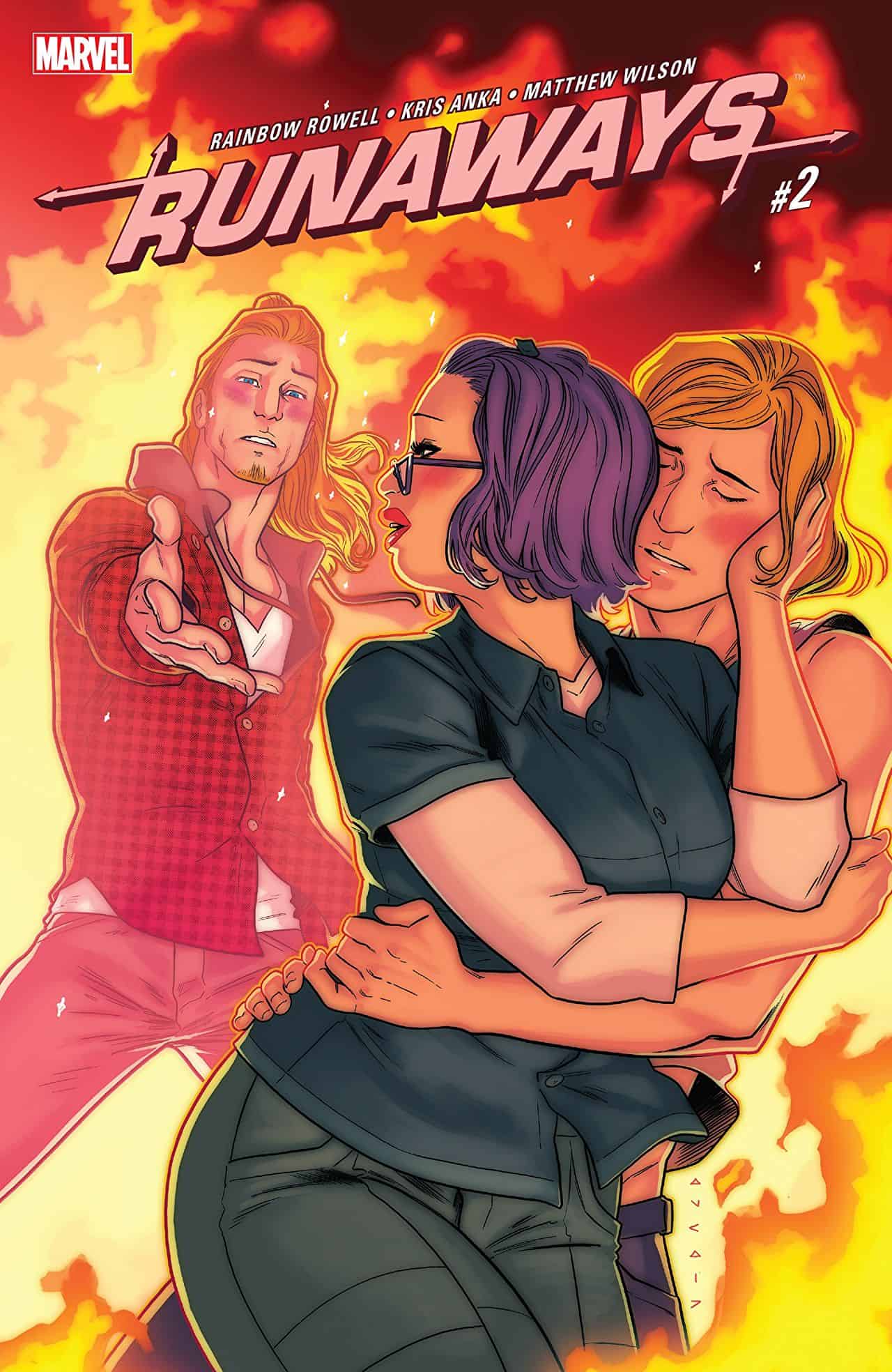 It’s been 2 years since Gertrude Yorkes died, and now she’s back from the dead! But she doesn’t understand why the team split up since the time of her death. A lot has happened, and it doesn’t seem like Nico and Chase are comfortable sharing what the team had been through during those 2 years.

Nico Minoru got a surprise visit from the past. It was the “present time” Chase carrying a dying Gert who he got from the time Geoff Wilder threw a dagger at her. Nico and Chase tried to save her from dying. Nico’s magic (despite that she was struggling coming up new words to activate her Staff of One’s magic) was able to summon a random podiatrist who was able to save Gert from her stab wound. Nico scolds Chase for messing with time. Chase explained why he had done what he did. Gert then finally woke up and mentioned Chase’s name at the same time we saw a mysterious person watching the teens from a monitor elsewhere, also mentioning Chase’s name.

Gert looked at the face of the last person she saw before dying and then semi-woke up seeing the same person she saw but a bit older. That person was her boyfriend, Chase Stein. Gert woke up completely on Chase’s lap, then finally noticed Nico in the room too. Gert, confused asked an explanation from Chase. Chase and Nico then explained to Gert the situation and what had happened since she died. 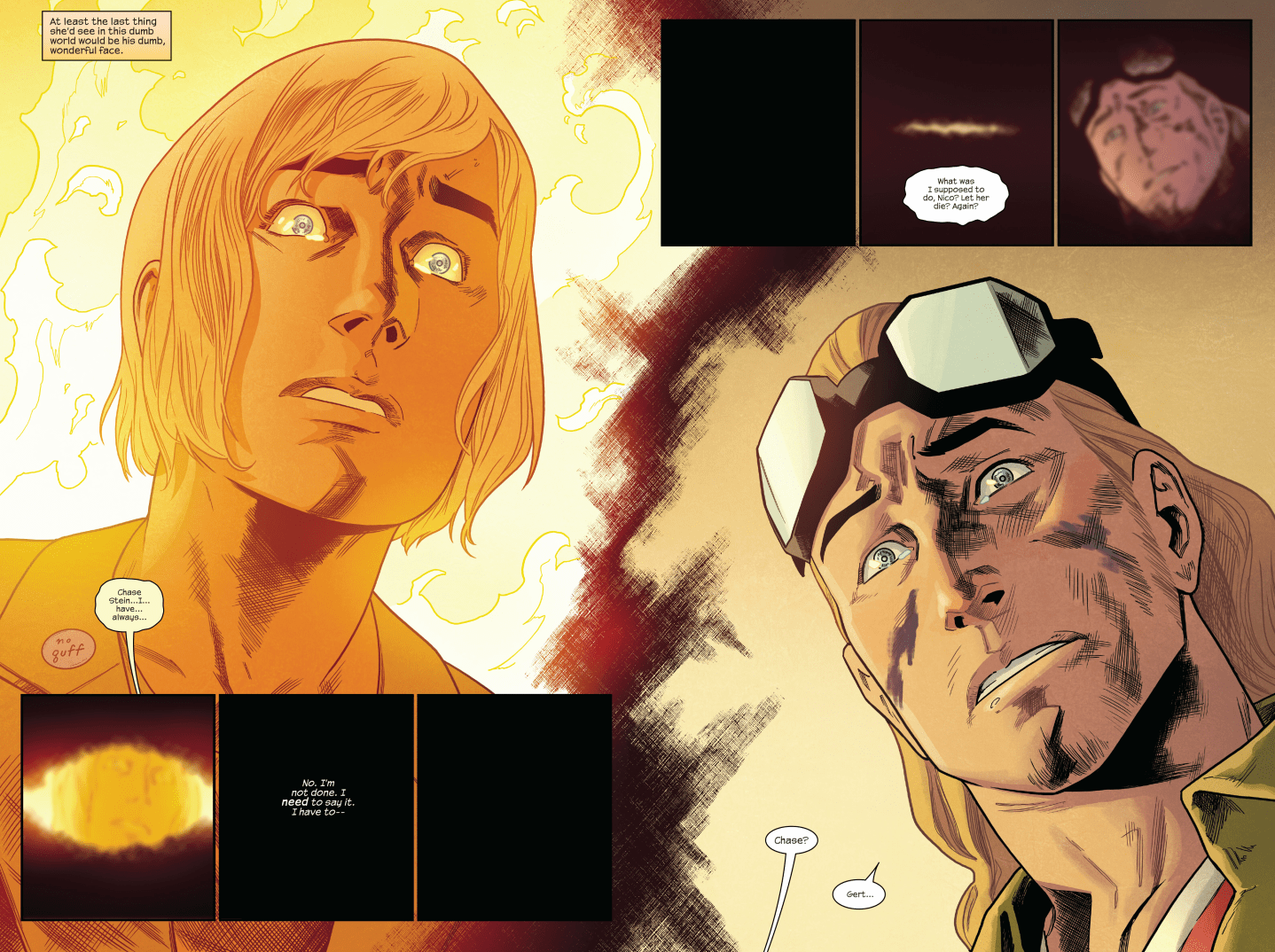 Later that day, we see the trio in one of Chase’s guest house.  They were unaware that they were being followed and watched by suspicious cats with glowing eyes. Inside, Gert asked what happened to the rest of the gang and why they had split up. Nico tried to explain it to Gert, who did not understand why Nico had allowed these things happen to the team. Nico lashed back saying that Gert wouldn’t understand since she wasn’t even there when it all happened. Chase then explained it a little better and Nico then started sharing a bit more about the time when both of them were kidnapped and thrown into Murderworld. Chase further shared about what had happened and the current whereabouts of the rest of the gang. Gert felt silent for a while and then shared how she felt, and how it could have all been different if she was alive. She expressed that back then she never thought she was important to the group and that she never considered herself as the heart of the team. When Chase tried to explain his feelings of losing her, the conversation was interrupted when Gert saw a familiar face. It was her dinosaur, Old Lace. Out of joy, both Gert and Old Lace hugged each other tightly. 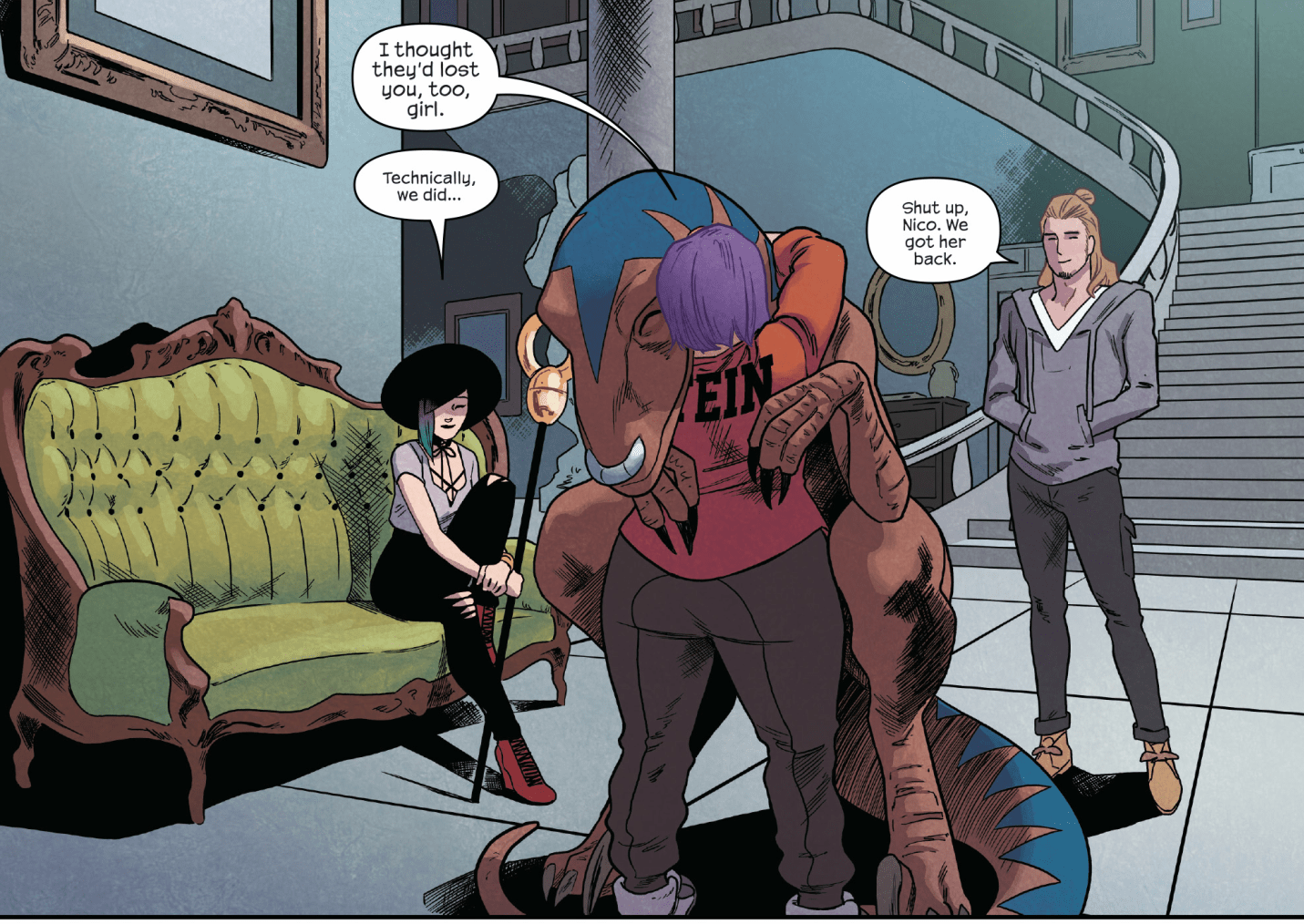 Gert then told both Chase and Nico that they now had to leave and find Molly. Chase and Nico told her that they can’t just take Molly away from her grandmother. Gert reminded them that they took Molly away from her evil parents. She then tried to formulate a plan on what to do first. She suggested if they should first contact one of their member, Victor Mancha. That’s when both Chase and Nico felt silent again. They then told her that Chase was lying about everyone being okay. They revealed to her that Victor had died too during his time with the Avengers.  Chase then adds that Tony Stark actually mailed Victor’s belongings to his address. Gert suggested that they should do a proper burial for Victor, which Chase and Nico agreed. They then open one of the boxes that Stark has sent and saw the severed head of their dear friend. 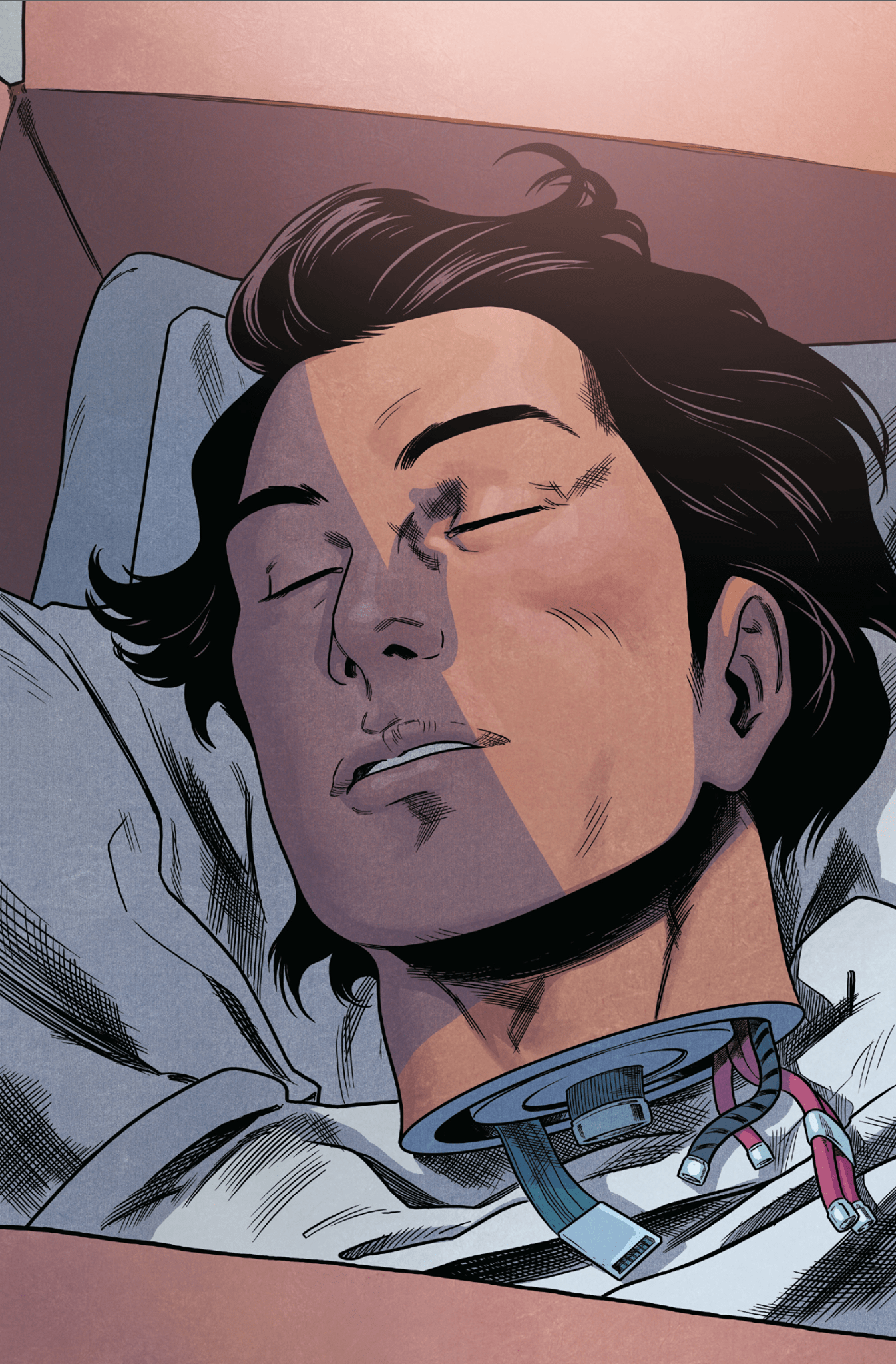 Elsewhere, we see Molly Hayes playing football at her Grandmother’s backyard. Molly’s grandmother then called for her to come inside the house to have lunch. The book then ends when a few of the mysterious cats with glowing eyes were shown following and observing Molly too. 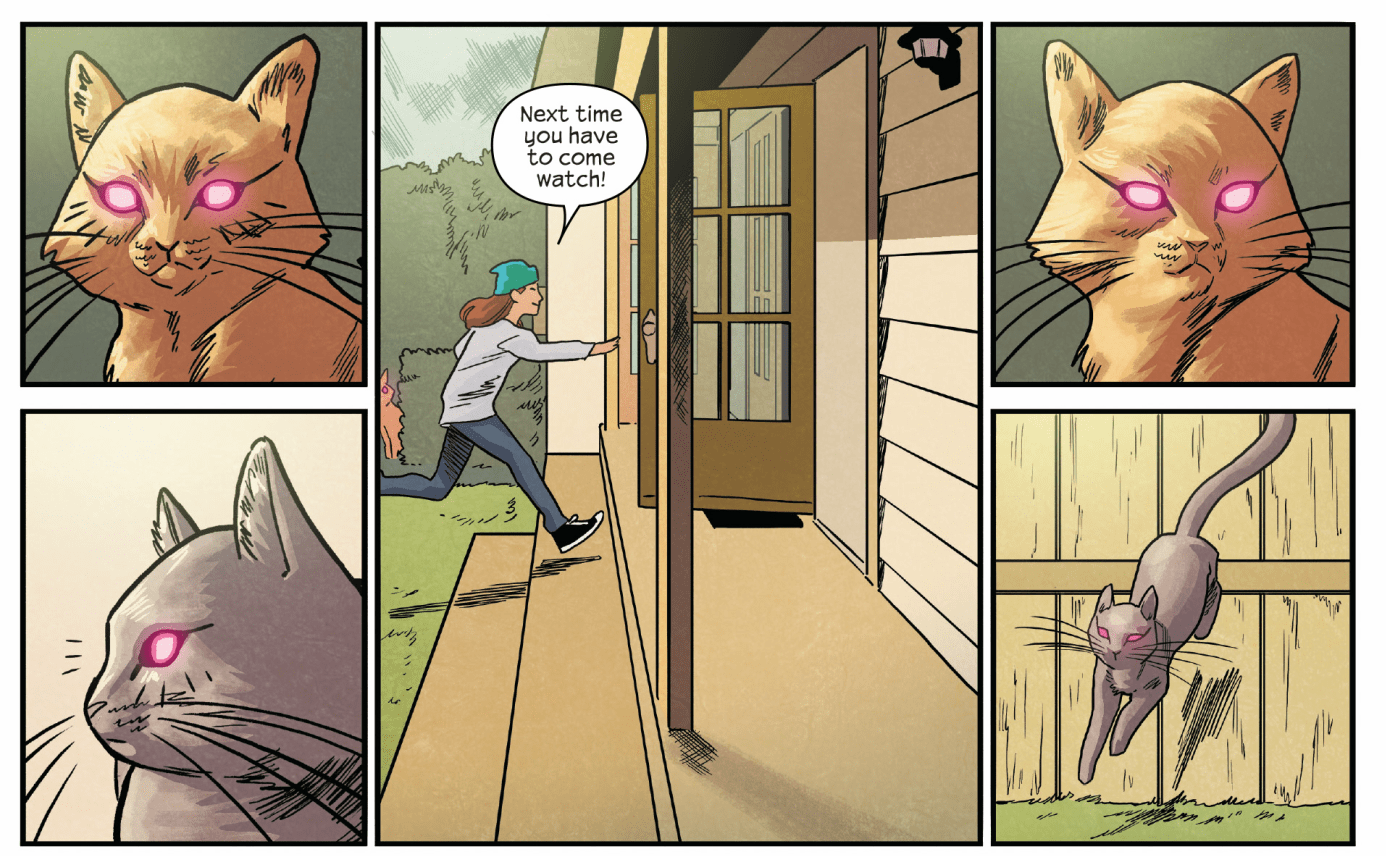 This issue definitely answered the big elephant in the room! What had happened to the rest of the Runaways after they had split up. It was interesting how Rowell managed to iron things out with all of the events that had transpired after the death of Gert back in Runaways: Volume 2, #18. One of the best parts was also when Gert had her reunion with Old Lace. It’s always good to see the fan-favorite Velociraptor (we all know she’s a  Deinonychus but for the sake of being a consistent fan) back with the team.  But what struck me the most was the revelation that only 2 years had passed since the time Geoff Wilder killed Gert. Which means all the major Marvel events that happened after that until now only happened within that 2-year time-frame! Which meant that Civil War, Secret Invasion, Fear Itself, AvX,  Age of Ultron, AXIS, Secret Wars III, Civil War 2, IvX & Secret Empire happened within 2 freaking years only! I’m not sure If Rowell spoke with someone at Marvel to get an actual time-frame and duration of Gert being dead, but that is something most fans would have to take in and process. Moving forward, another highlight for me would be Kris Anka’s gorgeous art. I love how his art style is so clean and well-drawn. The art speaks louder with the facial expressions and body languages that Anka has drawn to each character. You can actually sense Nico’s sadness and insecurities by looking at the art without even reading the dialogue. How Gert’s face translates the strong emotions she has been expressing towards Chase and Nico. One of the best examples is how Anka beautifully drew Victor Mancha’s head near the end. You can sense the quality and effort he had put into his work for this book and it definitely paid off in my opinion.  Matthew Wilson also did an excellent job adding the colors for the book. With his skills, he was able to set the mood right and giving life to Anka’s art. All in all and without a doubt the creative team behind this book did an awesome job and you can sense the love & dedication they have for these characters.

Final Thought: Rainbow Rowell continues to deliver by giving what the fans want. Answers. We now know what had happened to the rest of the gang. With Kris Anka’s exceptional art and Matt Wilson’s coloring skills. We have another winning book that will definitely please both new fans and old.