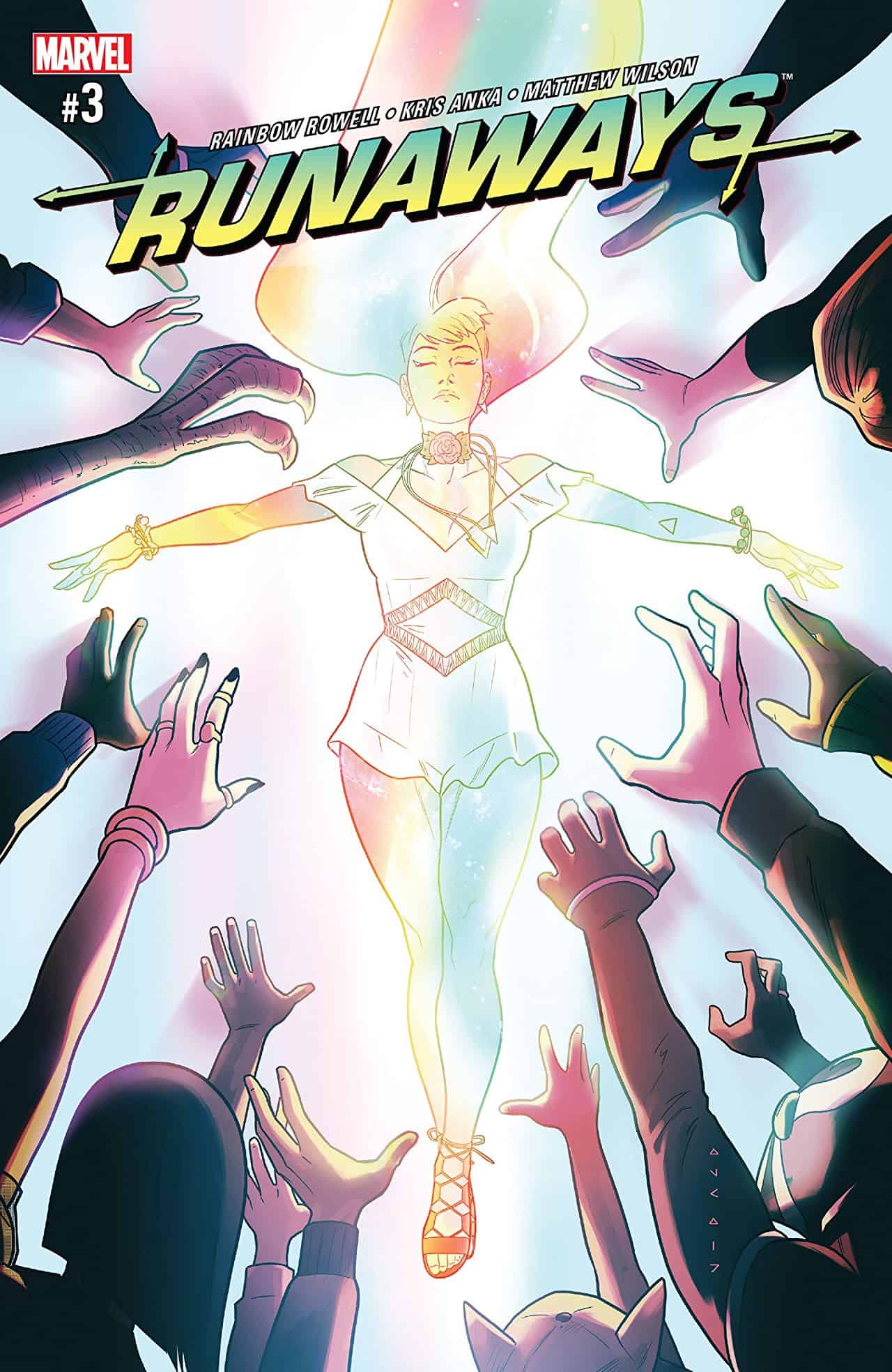 Karolina Dean is now living a happy life! She’s now in college, loves her roommate, has a helpful therapist and a loving relationship with her beautiful girlfriend. Everything seemed to be perfect and going according to plan. But, Is she willing to leave that all behind when she gets an unexpected visit from her old friends/family, Chase, Nico, and Gert who she thought died 2 years ago?

Previously: Chase and Nico discussed with Gert what had happened after she died 2 years ago. During their conversation at one of Chase’s parent’s private homes, Gert got a heartwarming reunion with her favorite dino, Old Lace. Despite the slight happy mini-reunion, Gert expressed her sadness regarding what had happened to the team. She finally decided that they should get everyone back together, and suggested to start looking for a fellow runway, Victor Mancha. Chase and Nico then broke the sad news to Gert that Victor had passed away during one of the missions he went during his time with the Avengers. Chase then told the girls that Tony Stark called him and mailed Victor personal effects. They then decided to do a proper burial for Victor. When they opened up one of the boxes, they then discovered Victor’s severed mechanical head. Elsewhere, Molly Hayes was playing soccer in her grandmother’s backyard. Her grandmother then called her in for lunch, while a number of mysterious cats with glowing eyes were observing her.

In her colorful alien form, Karolina Dean danced merrily to the Beatles’ song, “Lucy In The Sky With Diamonds” inside her dorm. She is enjoying her life and appreciating all the good thing in her life and being in college. She was then interrupted when she heard someone knocking on her door. She wore her inhibitor bracelet to return to her human form and opened the door. She then got an unexpected visit from her old friends-like-family, Chase, Nico, and Gert. She was so surprised to see Gert who she thought died 2 years ago that she accidentally dropped her mug on the floor. Gert told her she was not dead. Karolina asked her how and Gert responded that it was a long story. Nico mentioned that Chase screwed up. Chase then added that the 3 of them were planning to get the group back together. Nico then asked her if they could come in to talk about it.

The 4 of them then discussed what had happened. Gert then told them that now Karolina is with them they can now get Molly back too. Karolina confused, asked her what for. Gert answered Karolina so that Molly could be with them and Nico added, to be the Runaways again. Karolina then informed Gert that she couldn’t leave now, she had classes and it’s the middle of the semester at her college. Gert then tried to talk her through it, but Karolina told her that she likes her current life and would like to stay. Gert, looking hurt and frustrated, asked if they brought her back to life at the right time. She expressed that this was not the same Karolina, Nico, and Chase she knew during her era. She then walked out on them, and Chase went out after her too. 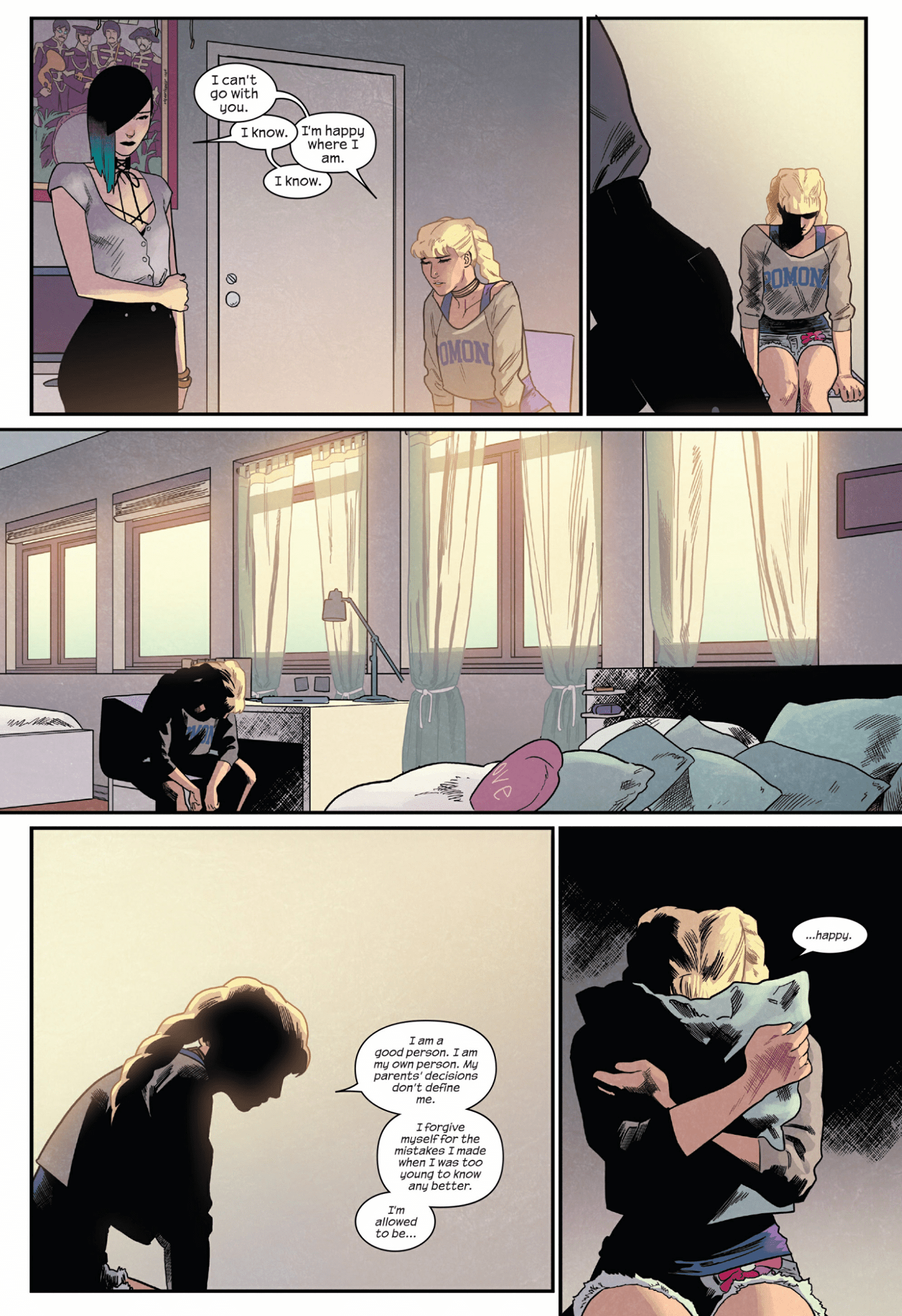 Karolina then told Nico that she couldn’t just drop out of school and that they can’t go back to how they were back then. She expressed that she had already moved on from their past. Nico understood her point, and then shared her thoughts as well while looking at the things and memorabilias Karolina had that shown how happy she was now. Nico said that until now, she still woke up every day thinking the same fear and concerned she had back when they were all together. She realized that maybe she hasn’t moved on like Karolina after all and that what Gert had offered, is a better offer than her current situation. Karolina then told her that she couldn’t go and join with them and told her she is happy with where she is right now. Nico understood and left, Karolina feeling conflicted cried while she recited her positive therapeutic mantras. 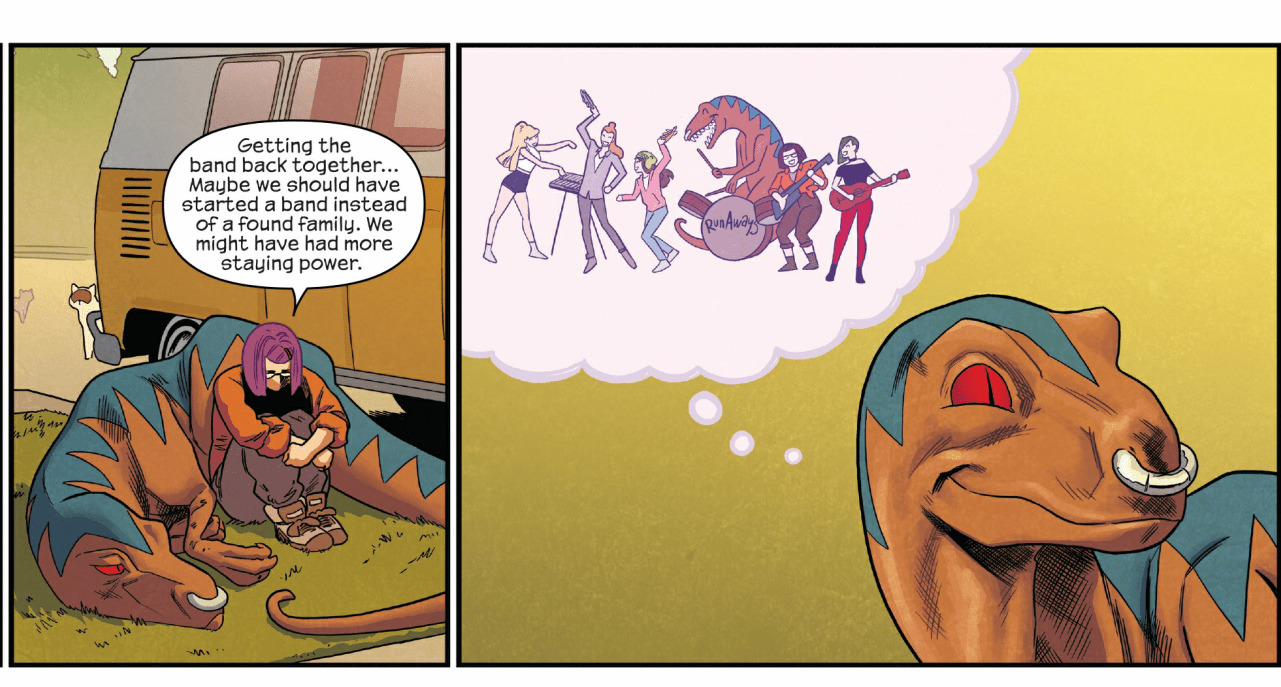 Outside, Gert released her frustration regarding the group to Old Lace and that it would have been better if they started out as a band instead of finding a family, and Old Lace then imagined a funny image of the whole group as a muisc band. Chase coming out from Karolina’s place, came after her. The three then went inside the van. Chase pulls out Victor’s head from his bag. Gert reacted disapprovingly and told him to at least show some respect for their friend. Chase confidently told Gert that he thinks that he could fix Victor up. Gert responded by questioning Chase’s confidence to repair Victor. Chase responded that he doesn’t have to know anything to fix things up like how he had done it with Gert’s Parents’ Time Machine. Gert then cried, sharing her feelings of abandonment, disappointment, doubts and where she’ll go from here if Karolina was right. That the Runaways are no longer a thing anymore. Chase responded that he had not abandoned her, that he came back for her.  Gert responded that he did come but for her, but at the same time did not wait for her. She then further explained that  their relationship is now more complicated (with the implication of the age difference.) Chase then told her he wasn’t trying to get her for himself but he was returning her to the guy she missed, his younger self. 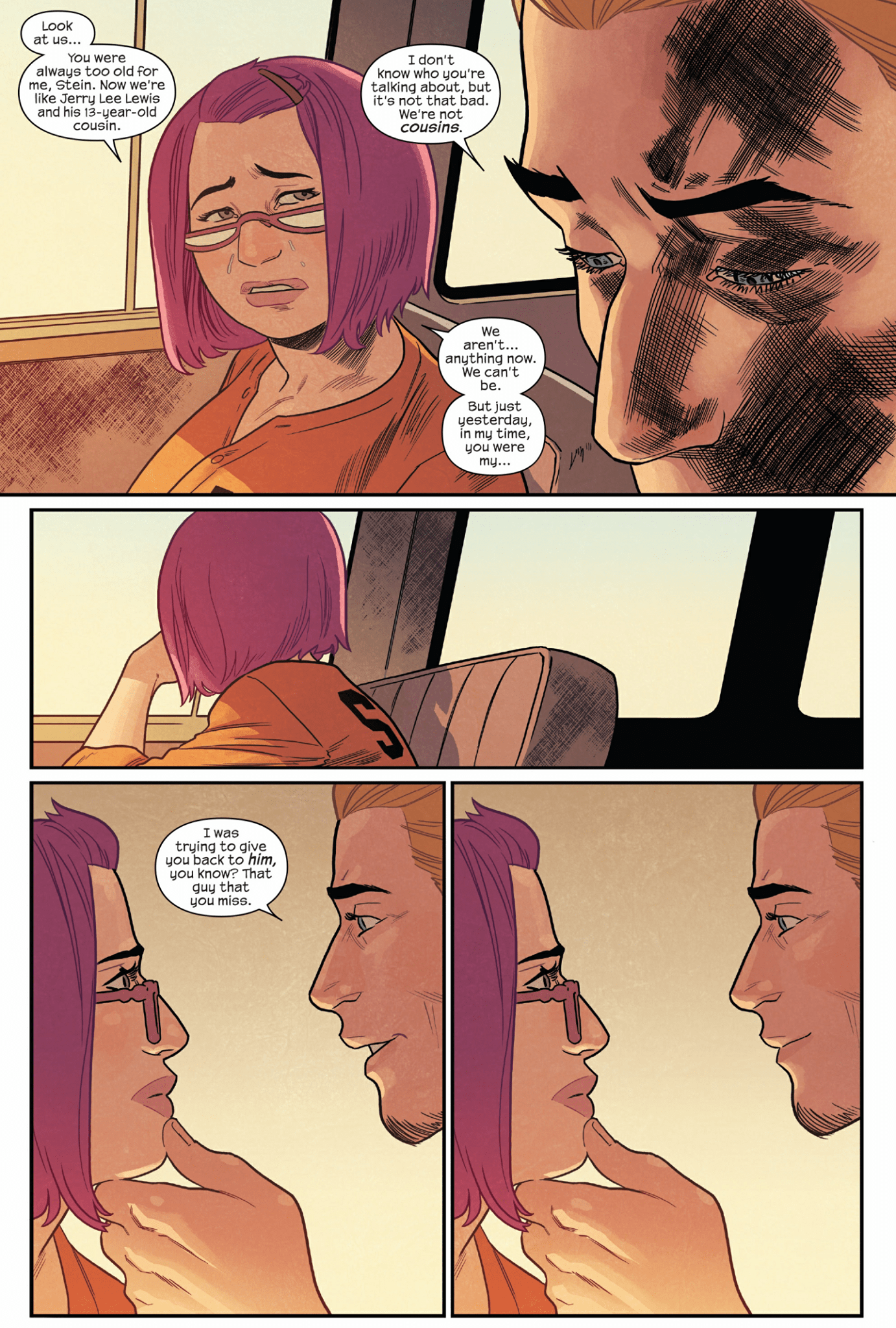 Nico then entered the van and told both Chase and Gert that they had to go and get Molly. Gert reassured this and asked if wasn’t Molly happy at where she is now. Nico replied that they will have to find it out and that despite that Karolina decided not to come along with them, she will still try to get the band together. Chase and Gert then smiled happily hearing that from their former leader. While the three young adults were talking about their excitement to get the group back together, Victor’s head suddenly rebooted and got activated without the three’s knowledge. It looked like he was booting up a backup system, with the file name: “Victorious.”

Elsewhere, a mysterious scientist was seen going down the basement, holding a syringe. Someone below then asked if it was Molly. The Scientist replied she was not Molly, but replied to the mysterious captive that he or she will see Molly again, very soon.

What Just Happened? Despite the slow pacing of the story, the strong characterization and scripting won me over. One word perfectly described this issue: beautiful. I love the way Rowell was able to script the reunion between Karolina with Nico, Gert, and Chase. The raw conflicted emotion that Karolina felt when she was invited by her friends to run away from what seemed like good life. You could sense that Karolina struggled to make a choice, especially now that she is already in college and everything is working well for her. As always I applaud Kris Anka skills to draw the characters beautifully. How Rowell’s scripting worked like magic with Anka’s art. It was definitely like a match made in heaven. The best example was during Nico and Karolina’s conversation you can naturally see and feel the struggle that Karolina was feeling when she had a conversation with Nico. Another was when Gert cried her heart out to Chase. The look on each other’s face and how Anka executed each of their facial expression made you feel how afraid Gert was and how caring Chase was toward her. Another thing that got me excited was the backup file Victor’s head was booting up. Longtime Runaways fans will remember that Victorious was the future supervillain version of Victor created by Ultron that came back in time in one of the original/earlier runs of the series. At the end of the day, this comic was a fun read and a beautiful book to look at. Looking forward to the next issue and how it will emotionally play with my feelings towards these characters.

Final Thought:
Emotionally well written and beautifully drawn, the 3rd issue of Runaways from Rowell and Anka delivered another bittersweet reunion between the main cast. Despite, the slow pacing of the story the book managed to provide you enough moments to invest in each characters’ inner conflict, struggles, and development.  If you want a superhero book that gives you all the feels and a different perspective on the different side of the super-powered community, then Runways is a recommended read!